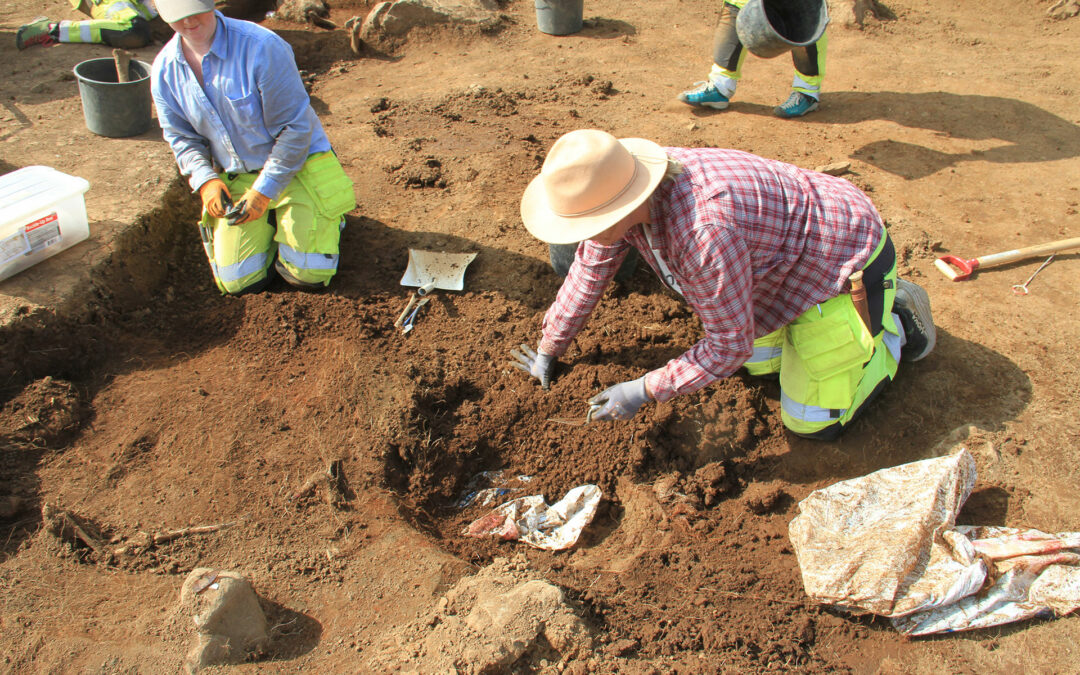 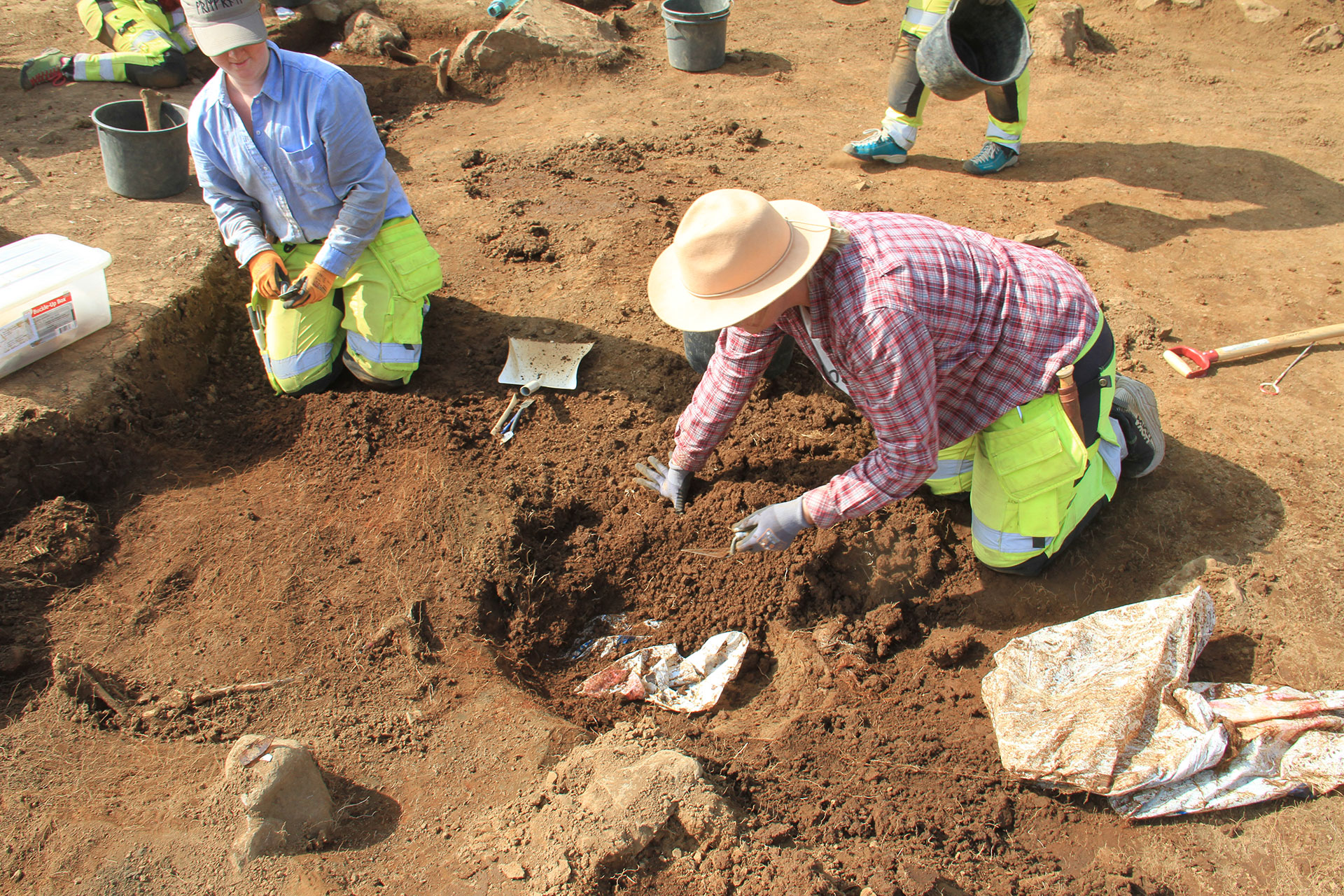 Skaftfell’s 2022 summer exhibition Afield (Fjær) is connected to curator Becky Forsythe’s ongoing research-based project that considers land-based practices, materials and themes. The exhibition brings together works by Icelandic and Canadian and American artists, as well as found objects collected in archeological and geological excavations on loan from The National Museum of Iceland and The Icelandic Institute of Natural History. The multidisciplinary curatorial approach tells new stories through art and scientific research. Alongside works by Canadian and American artists Diane Borsato (1973) and Geoffrey Hendricks (1931 – 2018) and Icelandic artist Þorgerður Ólafsdóttir (1985), the exhibition includes minerals collected by the Icelandic photographer Nicoline Weywadt (1848 – 1921) at her family farm in Teigarhorn, in the East Fjords of Iceland, as well as objects excavated from the archaeological dig at Fjörð in Seyðisfjörður, during summer 2020 and 2021. The exhibition is an example of Skaftfell’s importance as a venue for lively artist-led activity and curatorial experimentation.

The artworks on view by Borsato, Hendricks and Ólafsdóttir, are shown alongside minerals and plastic artifacts found in history and natural history museum collections today. Together they constellate references to the sky, geology, land, and push further into themes of archeological exploration, mineral extraction, taxonomy and classification, and human-led environmental impact. In the exhibition human and environmental ecologies are unearthed in fieldwork, research and performance that in various ways speak to our current position in the Anthropocene. 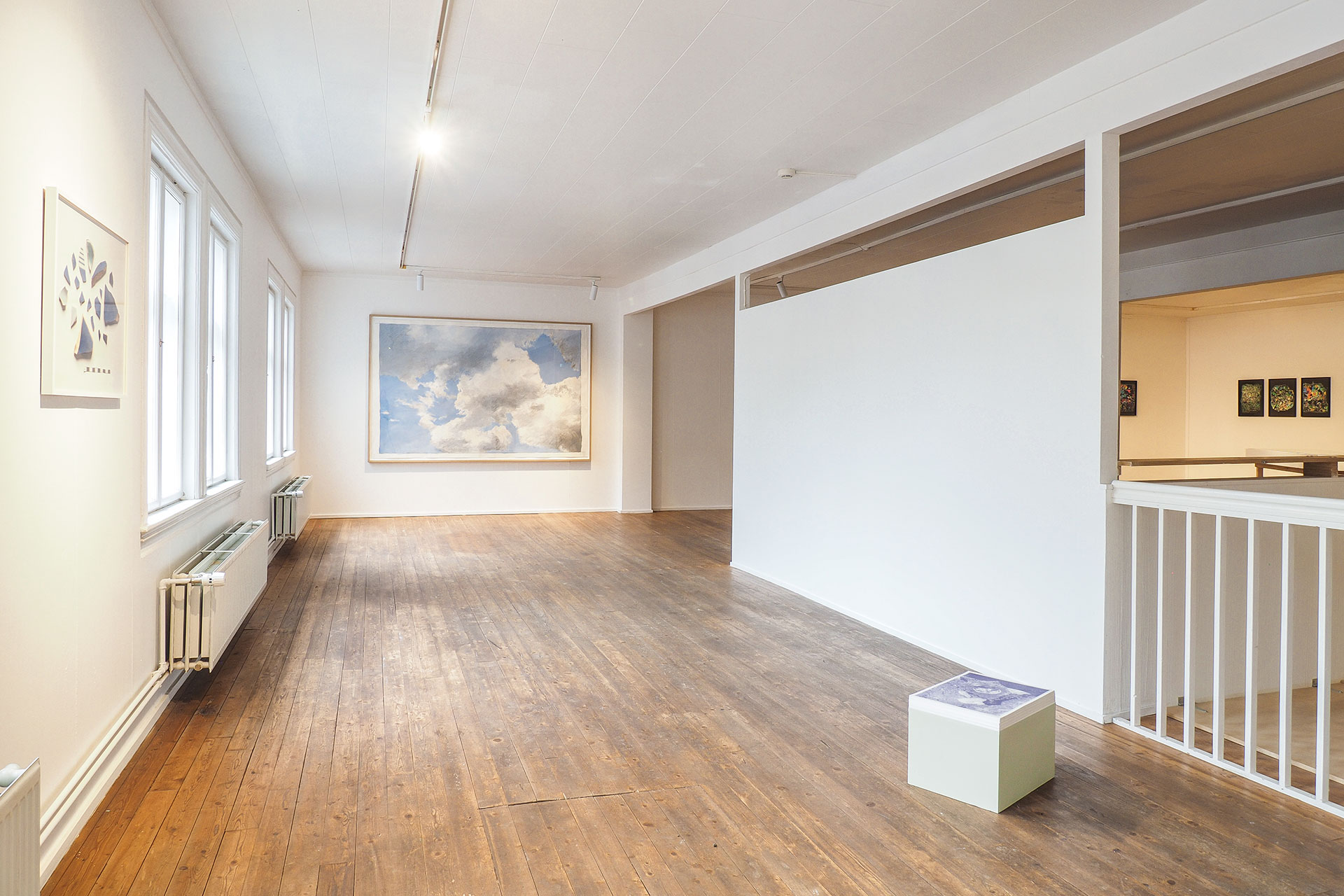 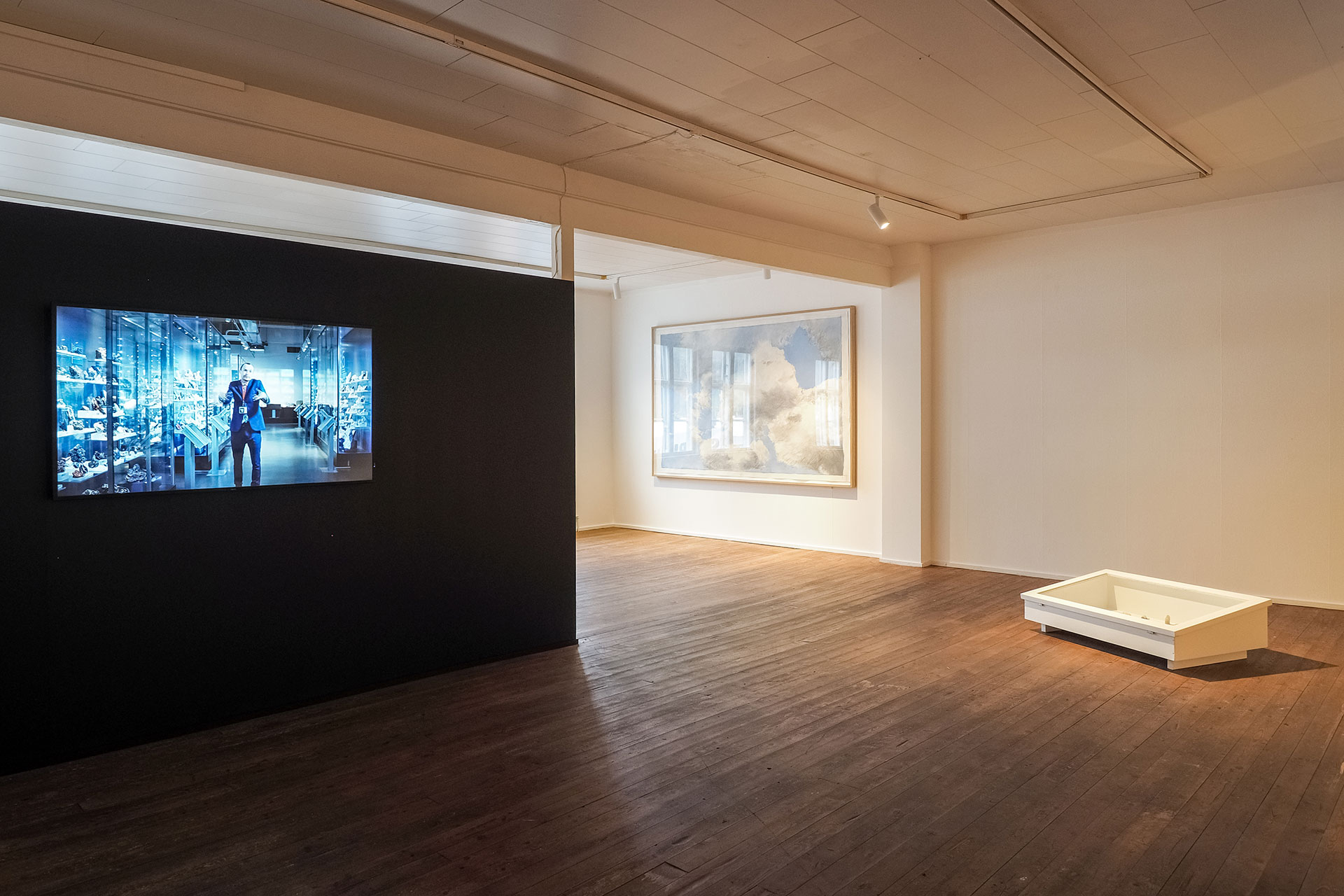 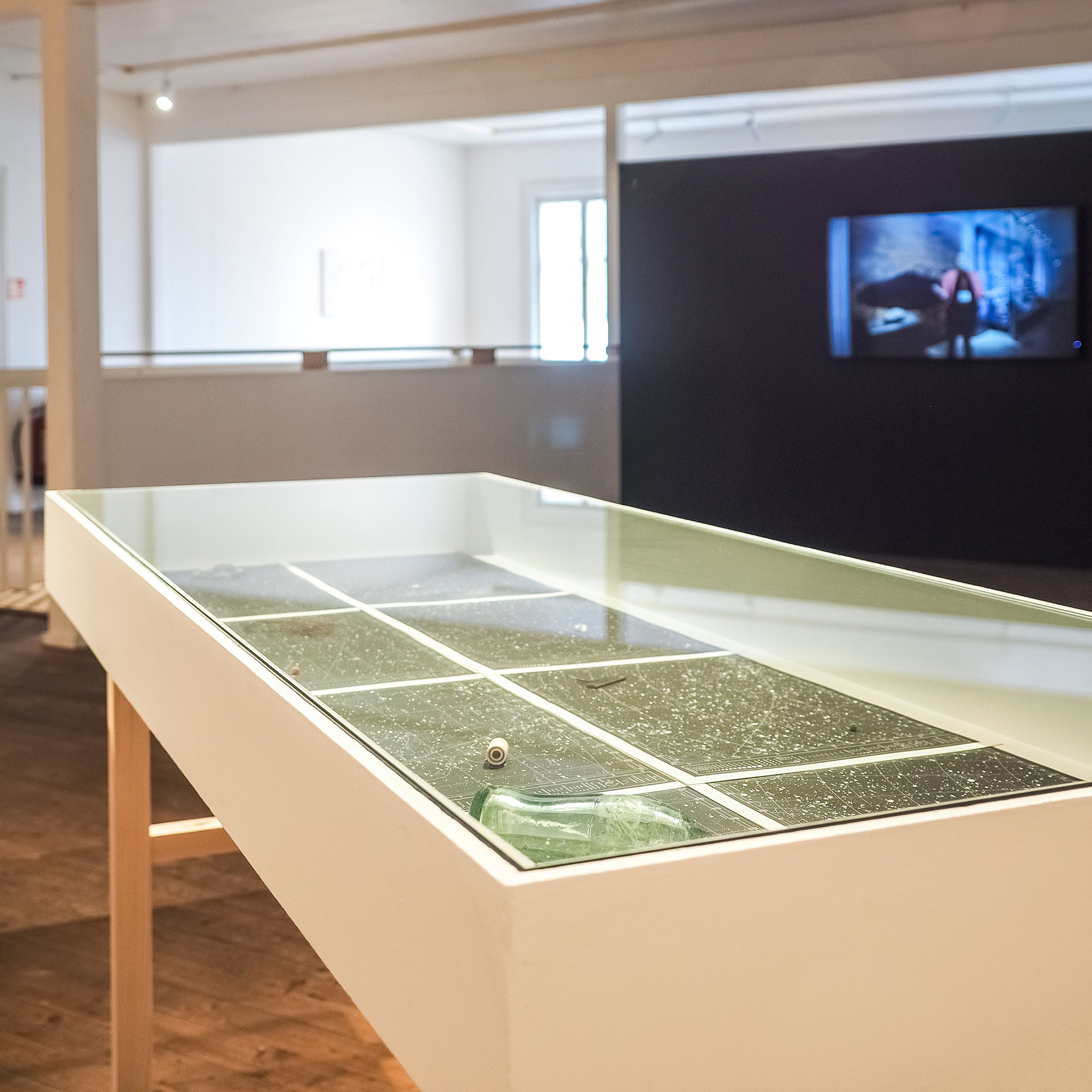 In A Large Sky for Iceland Geoffrey Hendricks preserves the clouds in the sky. Fleeting and phenomenal, the reference to that which is impermanent invites viewers to look up high and take note of the changes that are happening as quick as clouds, and in doing so, make further connections between the sky and the earth. In his back-to-the-land way and his many interpretations of clouds, Geoffrey’s performances, which often resulted in works like this, incorporated natural materials that, in unison with his body, were a point of reference and closeness to what surrounds us. 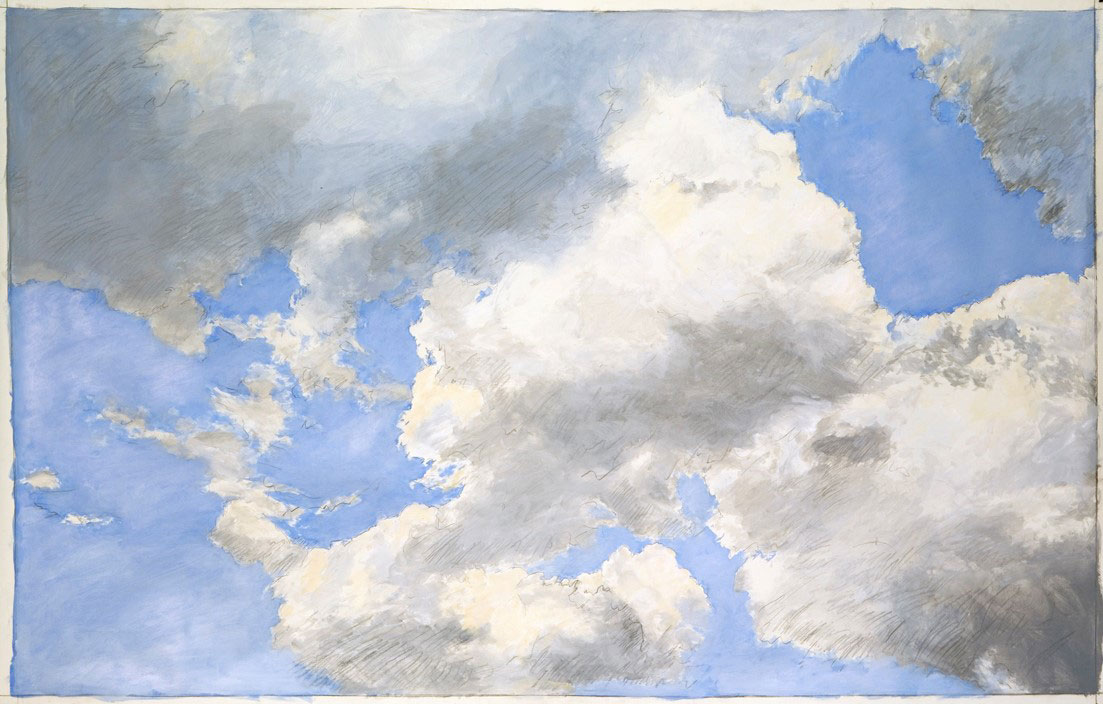 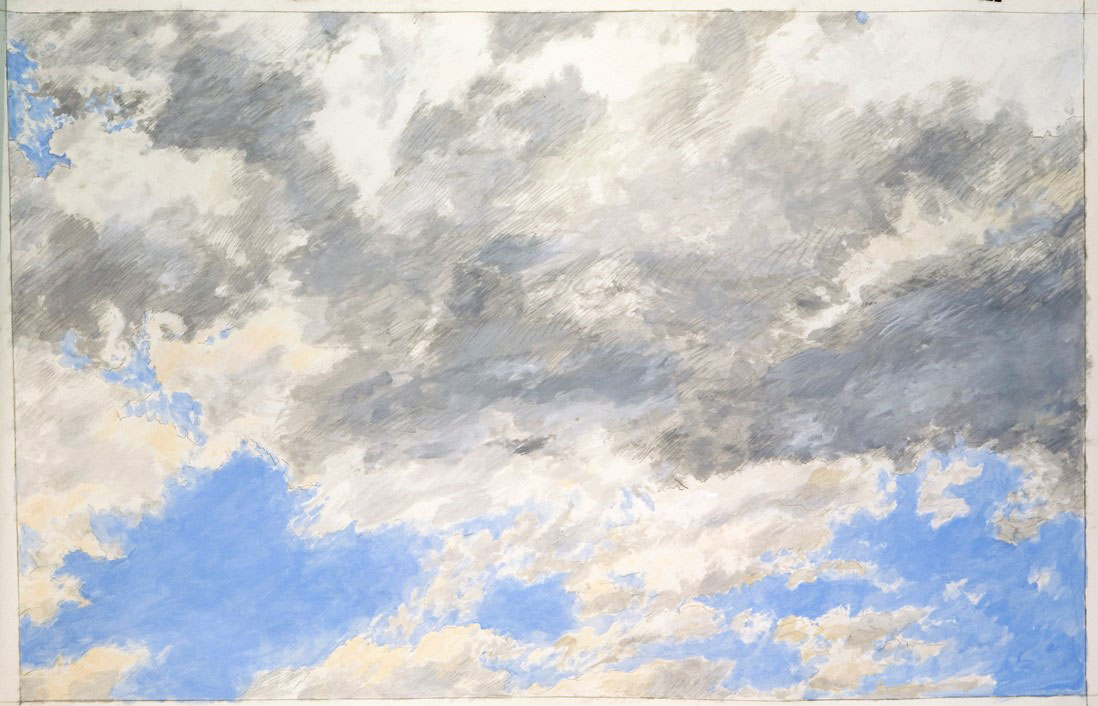 Geoffrey Hendricks, A Large Sky for Iceland, 1984, acrylic and graphite drawing on paper, collection of The Living Art Museum.

In the photograph The Sky Below Seyðisförður, Ólafsdóttir has assembled vibrant blue pottery fragments found at the archaeology dig in Fjörður, in a nod to Hendricks’ paintings of clouds and skies. The pottery fragments were recently unearthed in Seyðisfjörður in an archeological excavation being led by Ragnheiður Traustadóttir’s Antikva project; they are now preserved at the National Museum of Iceland along with other pot shards featured in another photograph, Flowers for Seyðisfjörður. In the assemblage composed of plastic finds entitled Atlas of the Heavens, the found objects are shown against found prints of the heavens as if to evoke a distant place, with the plastic performing as potential satellites in a near-future sky. Not all of the synthetic objects found at Fjörður, arriving from our everyday lives, have been turned precious. Rather, as documented in photographs reproduced as risographs entitled Almost Artifacts, some objects have been discarded again, placed back into the ground. Time Capsules, a work based on photographs of core samples serves as an cyclical archive of time as it disappears. 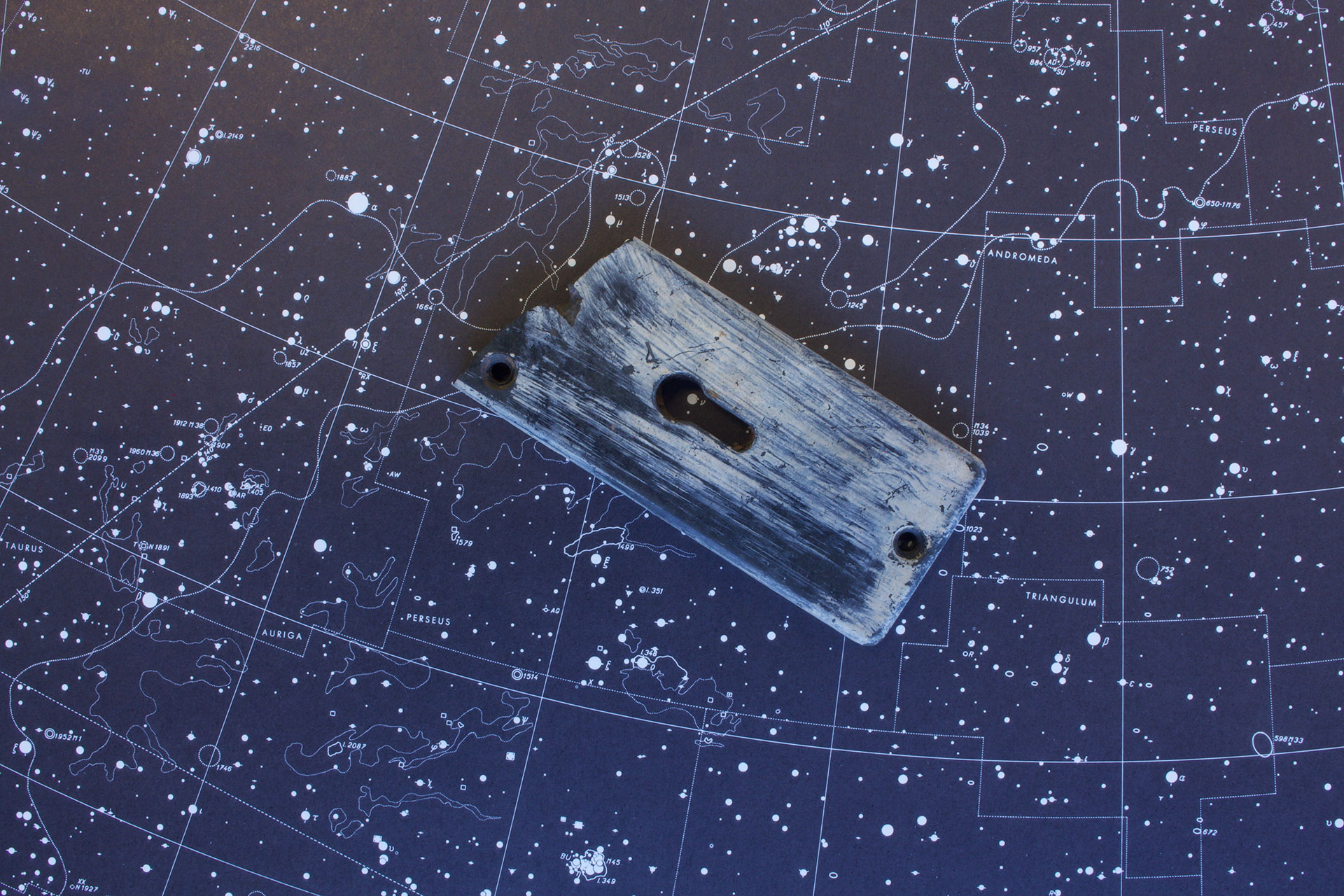 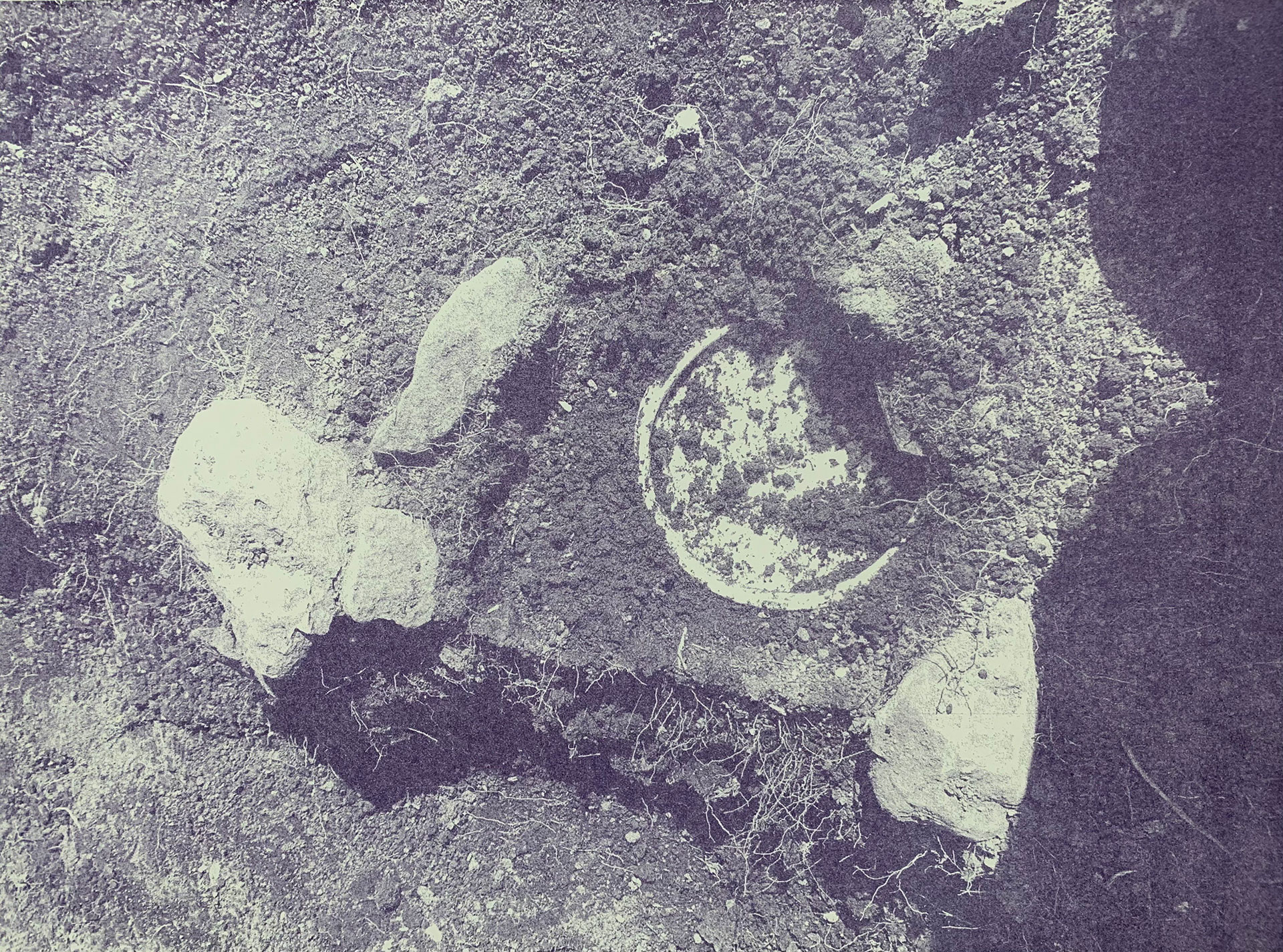 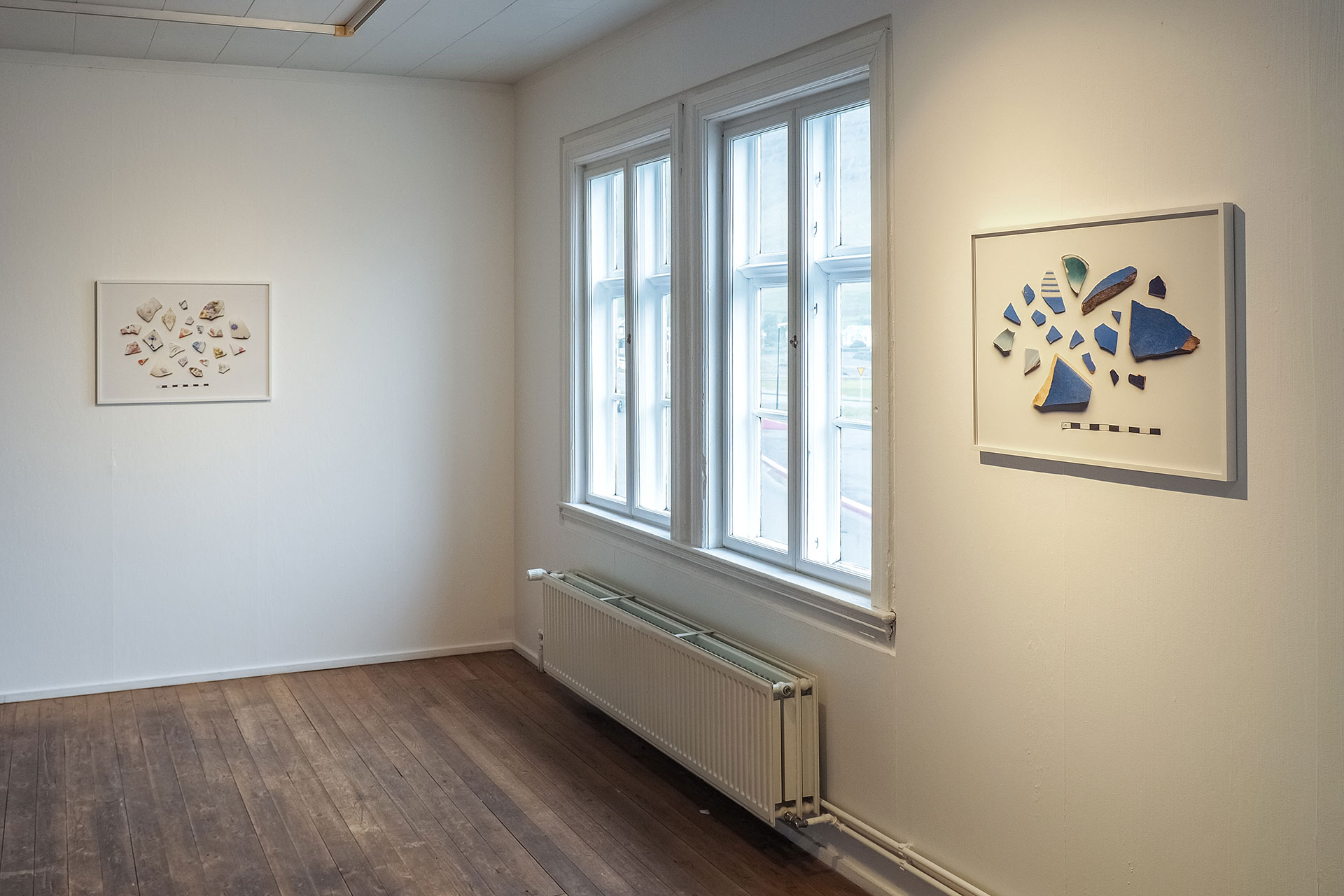 Borsato’s video Gems and Minerals speaks to some of the world’s oldest geological resources: the rocks and minerals found in the Teck Suite: Earth’s Treasures galleries at the Royal Ontario Museum in Toronto. In the video, museum guides use American Sign Language (ASL) and site-responsive dance to illuminate and focus a critical lens on stories that are not usually told about the social impact of mining and extraction, and of the seductive beauty of the materials we mine. The work asks us to pay close attention to the curiosities found in natural history collections, and to push further to consider their less-impermanent objects to the stories that are told through them — by whom and at what cost? Sometimes with humor, but more often disturbing and complex, the performed stories shed light on questions of personal attachment and reliance, of land theft leading to loss of Indigenous spiritual traditions, and the environmental and economical impacts of mining and resource extraction. 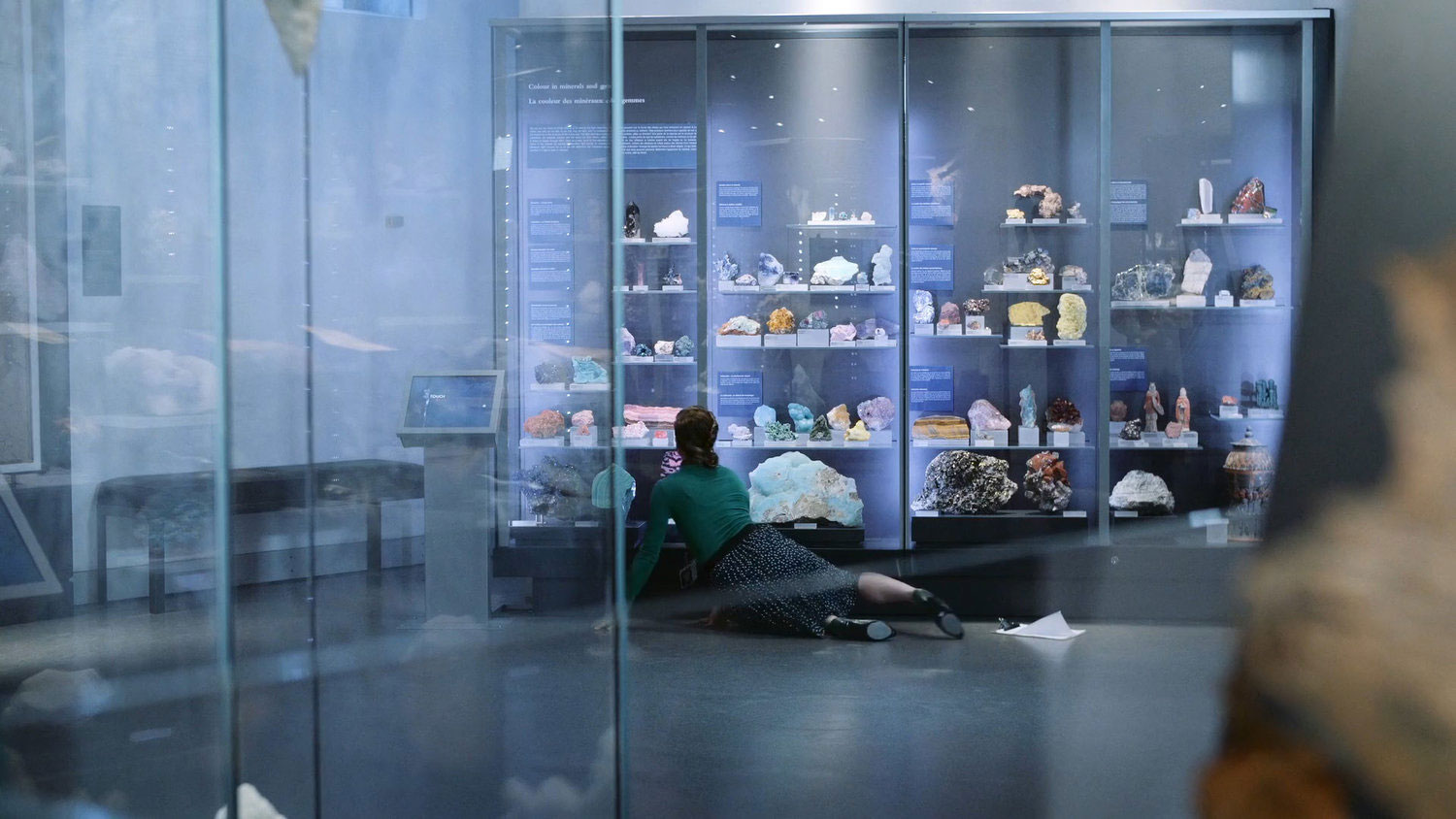 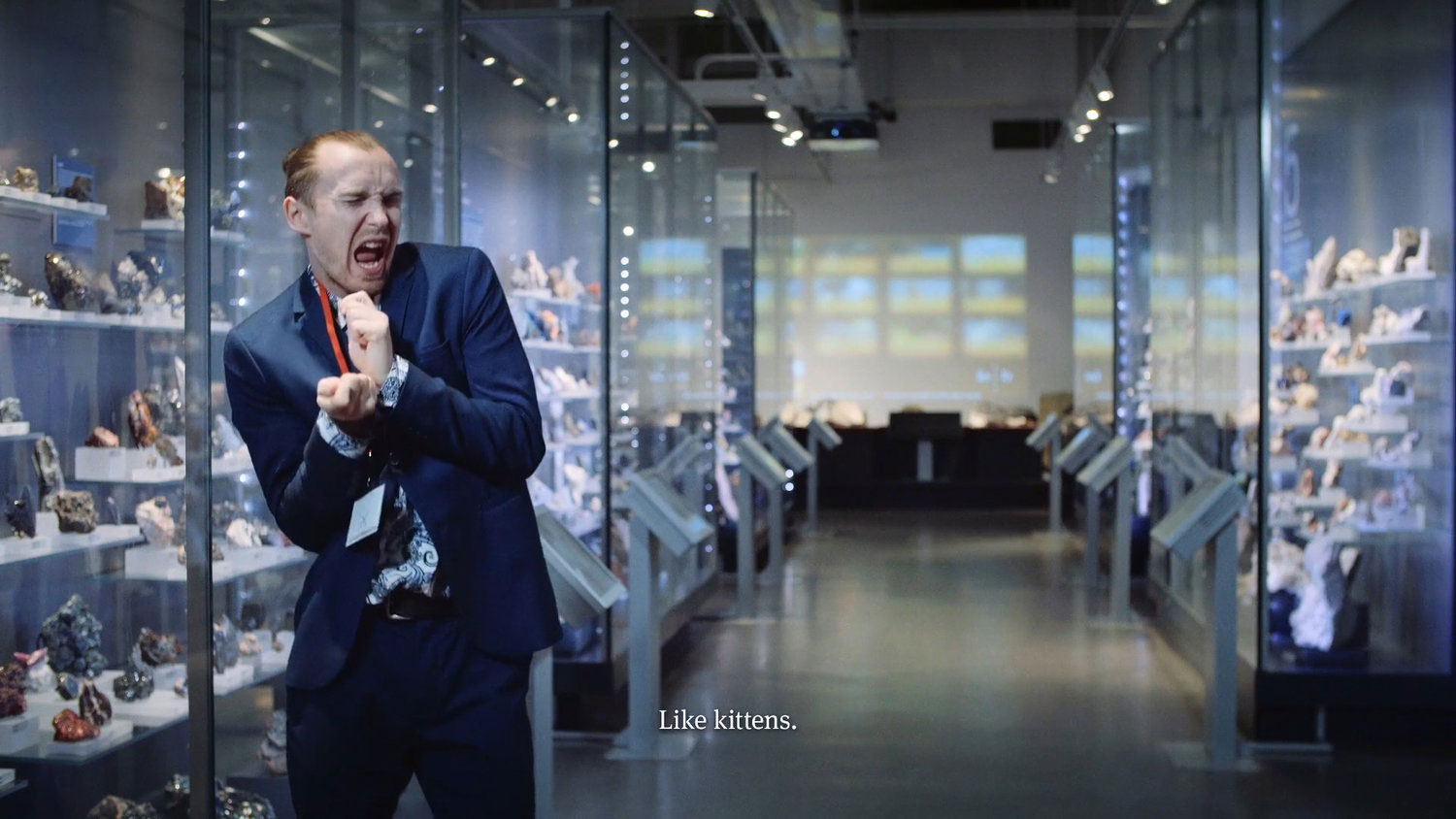 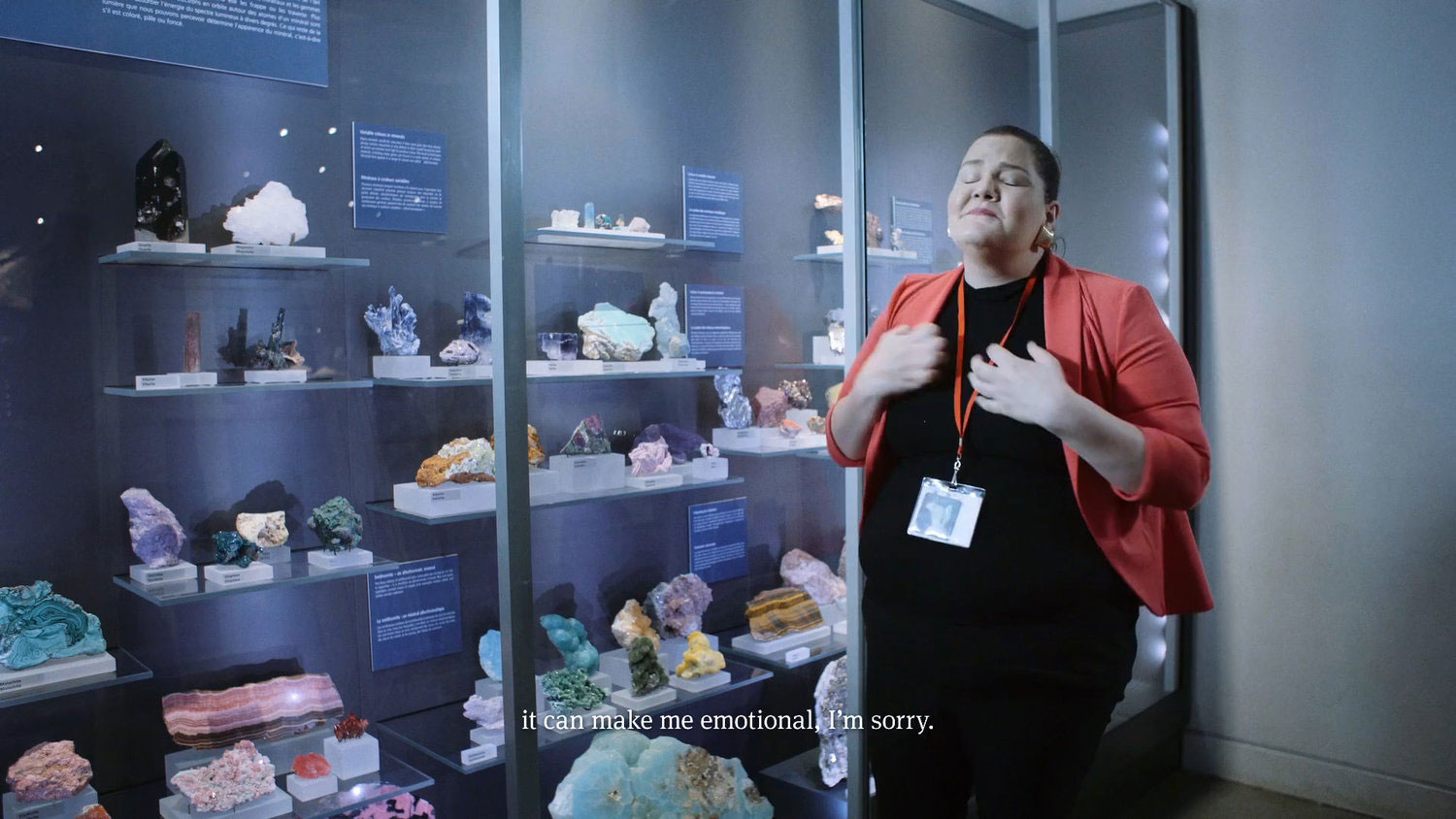 Gathered, organized and assembled in response to works by Borsato and Þorgerður, minerals collected by Nicoline Weywadt (1848-1921) demonstrate the human desire to collection and classify. Weywadt, who studied mineralogy in Copenhagen in the 1870s (and, significantly, was Iceland’s first professionally-trained photographers) collected minerals at Teigarhorn, in Dúpavogshreppur, in east Iceland, a mineral-rich area where Schoolite, stilbite, epistilbite, mordenite, laumontite and heulandite, seladonite, opal, chalcedony, rock crystal, calcite and Iceland spar are found. Although the region was declared a natural monument in 1976, for over 200 years the zeolites here were used in various geological studies and, in the 18th century, specimens were sold to museums around the world.

Taken together, the objects in the exhibition ask the view to consider the many ways we attend to land and its beauty, but also the equally many ways we extract what is precious from it. In Afield, ethereal hand-painted and found skies, collected gems and minerals, performed stories and archeological finds counter notions of decay to become catalysts for memory and the experience of the the passage and suspension in geologic time. By considering human desire and its impact on change in the natural, non-human world, the exhibition asks: how can the ritual of heading out into the environment, newly navigating our relationship to it, move us closer to knowing this changing world?

Afield / Fjær opened on June 4th and is currently on view at Skaftfell Center for Visual Art until September 4th 2022.

The exhibition is curated by Becky Forsythe, with the support of staff at Skaftfell.

For more on the artists and their work:
dianeborsato.net
thorgerdurolafsdottir.info