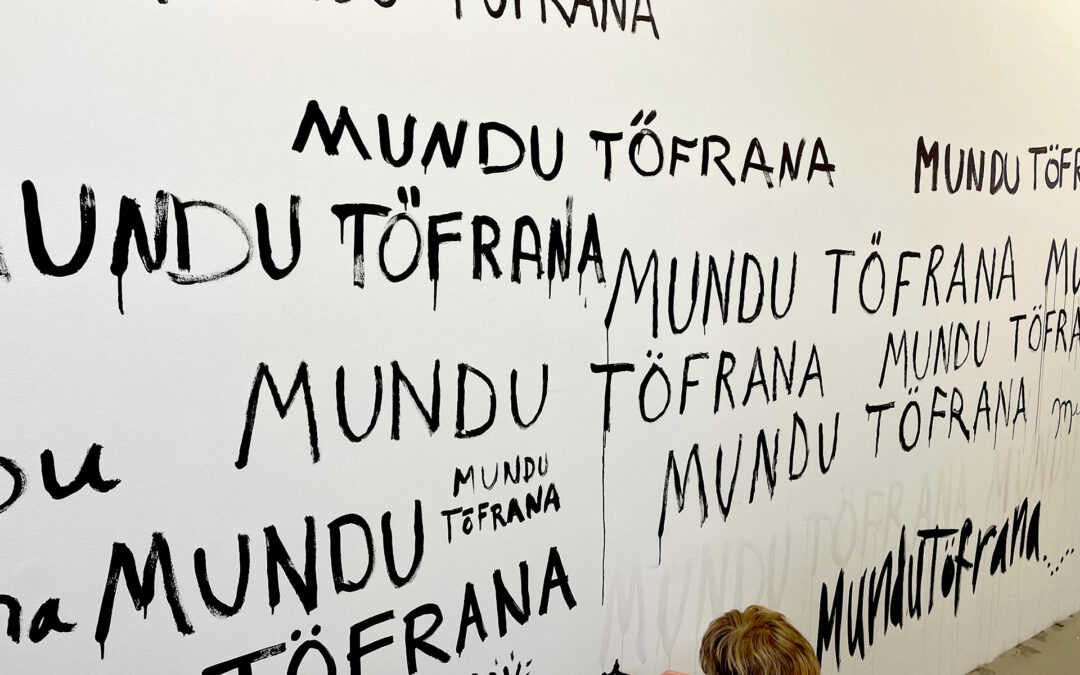 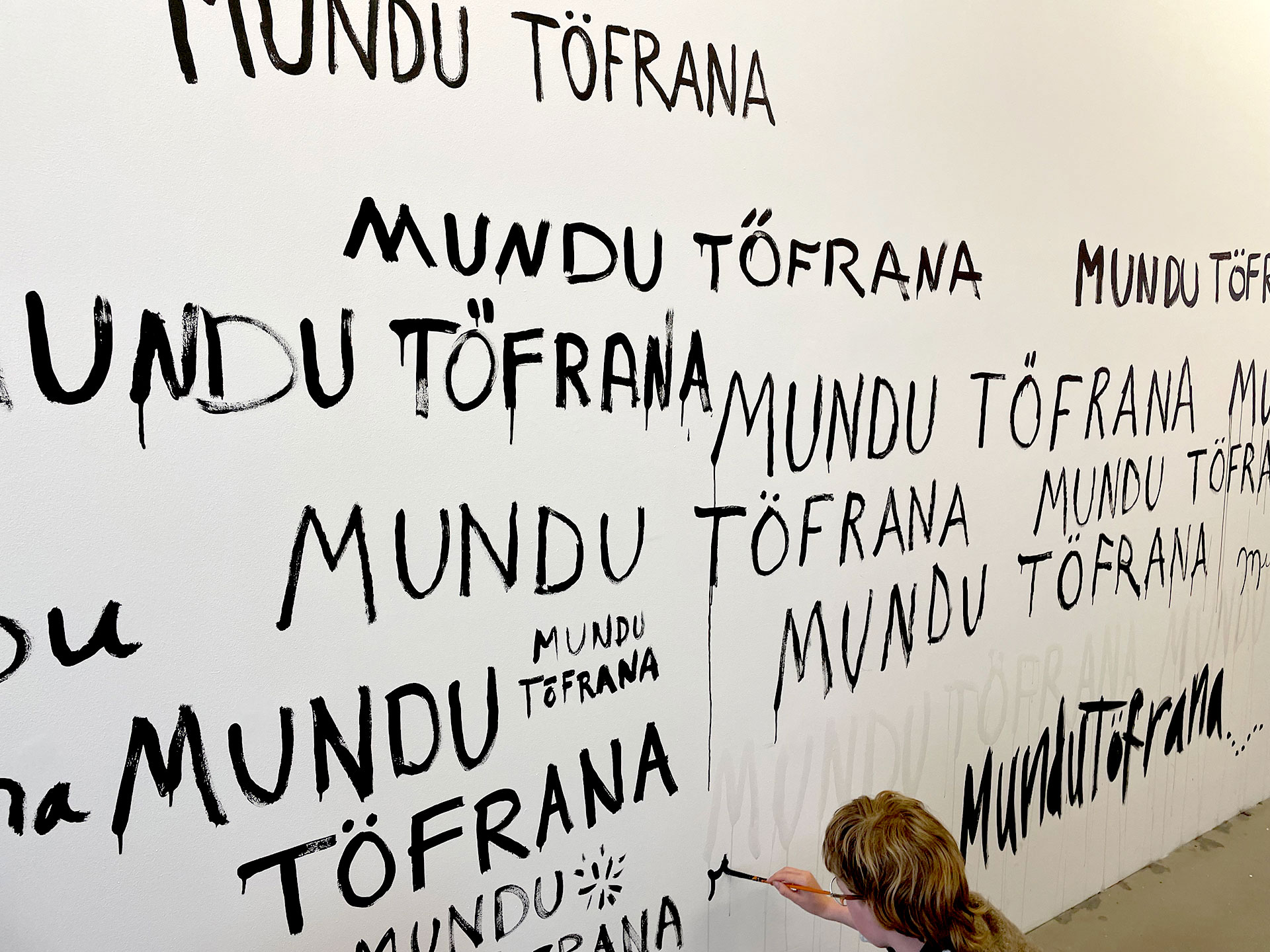 Sequences real time art festival is an independent artist-run festival held biannually in Reykjavík. This tenth edition also reaches out of Reykjavík with exhibitions in Akureyri, Hveragerði and Ísafjörður.

“Time has come” is the title of Sequences this year curated by Þóranna Björnsdóttir and Þráinn Hjálmarsson. I believe that the title is very fitting to how many of us are feeling right now after 19 months various restrictions and uncertainty. It’s time to get out and experience some real time art! 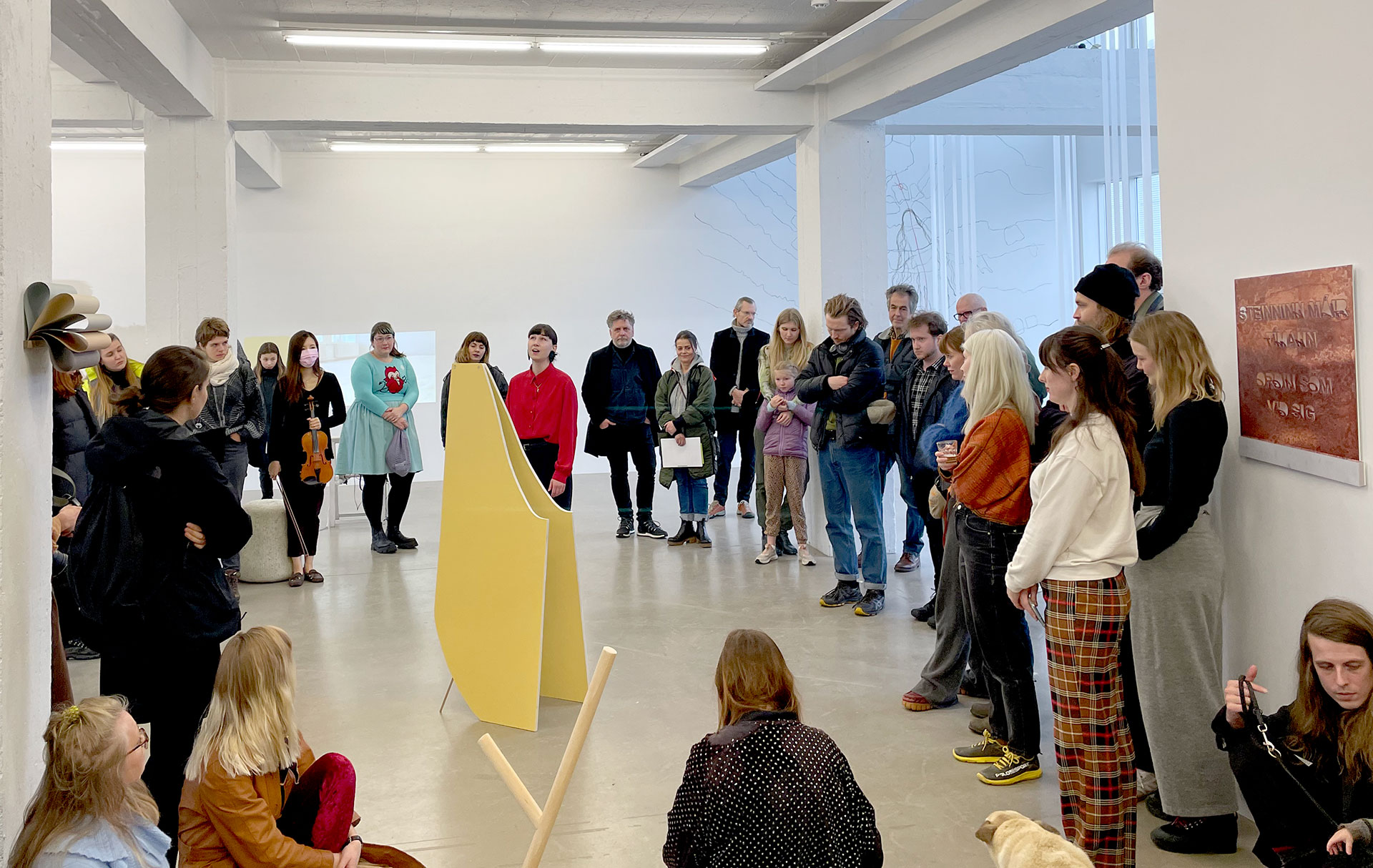 For the Opening event of sequences at Veröld – Hús Vigdísar I took the bus nr.12 at five o’clock on Friday. Thinking I could easily use the same ticket (which is valid for 1h15min) to go back downtown to continue my exhibition hopping, I was wrong. I knew I was going to Elísabet K. Jökulsdóttir’s performance, the festivals honorary artist, called Stories of Creation. We were ushered into a lecture hall and after a speech by the curators the artist came to the podium. In her performance lecture which was accompanied by a sousaphone player who interrupted her at various stages of her speech she tried to define creativity and innovation with a formula she had developed for creation/destruction. At times it felt like I was sitting in a philosophy class I had not prepared for and being an MA student in Curatorial Studies my attention span for lectures is usually gone by Friday afternoons.

Following were stories of creation from different people connected to different cultures, like India, Kurdistan, Japan, Russia and Nordic mythology to name a few. These stories described the creation of the world according to different cultures and places and in some cases the creation of individuals. It was a welcoming revisit of stories most of us were taught in school. It included an impressive reciting of the Dwarf Count from Völuspá and the telling of the Japanese creation story in Japanese told by sounding out old Chinese symbols. Although I did not understand a single word it was still a beautiful mediation of sounds. 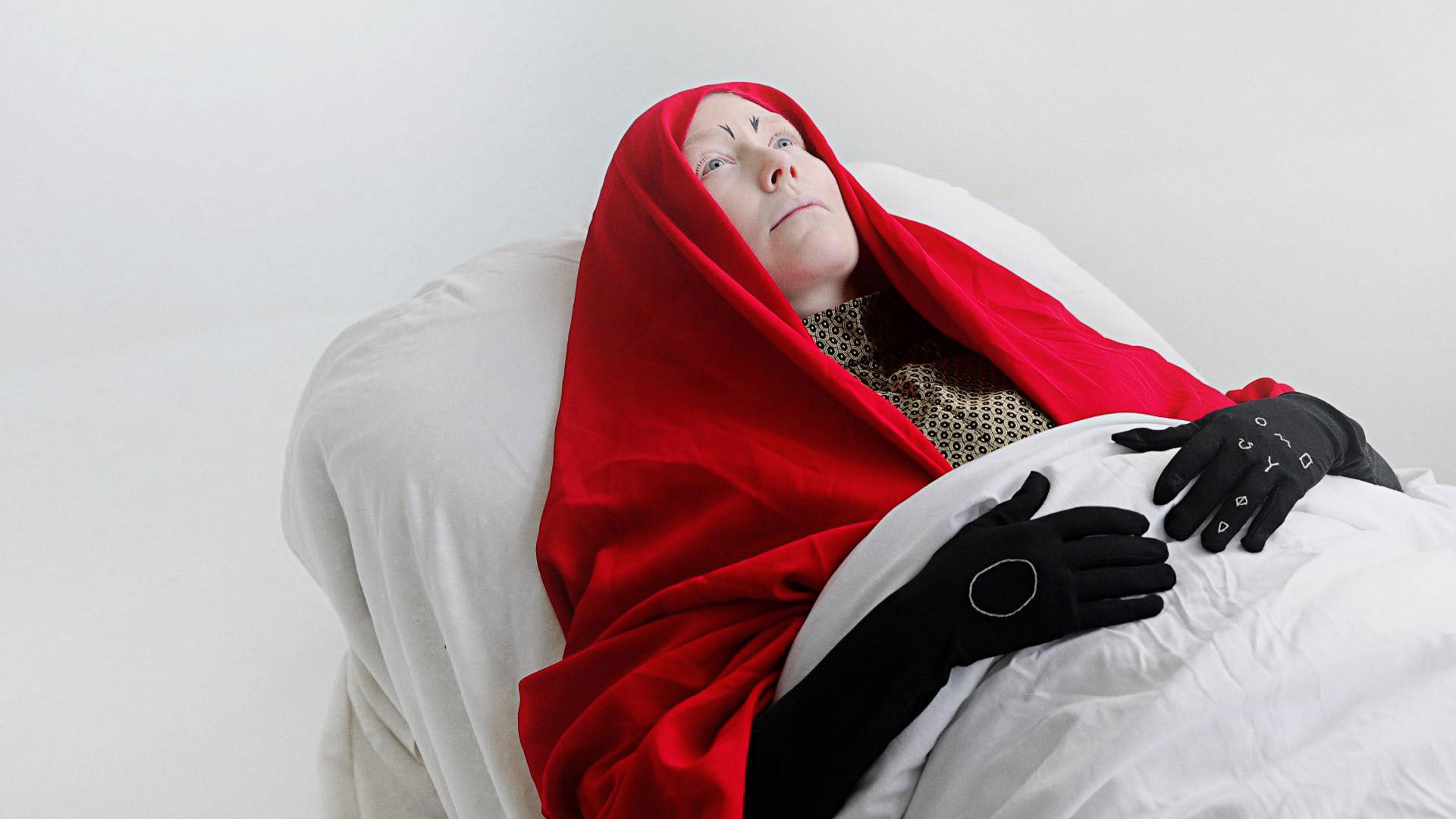 At Bío Paradís on Friday evening the artist and poet, Ásta Fanney Sigurðardóttir, premiered her film Munnhola, obol ombra houp-là. Bíó Paradís was packed with people and Salur 1 filled up quickly. Seeing a video work in a movie theatre is a special experience. There is a commitment you make by sitting down in a theatre that you don’t make when passing a video work on a screen in an exhibition. Although this film had a beginning and an end, I quickly stopped trying to figure out the storyline and just enjoyed the shorter narrative aspects between each scene and the incredible quality of production. This 30min film is a series of performances that takes you on a surrealist journey with divers fascinating characters and different voices. There will be another showing on Sunday 24th at 20:00 and I am tempted to see it again. 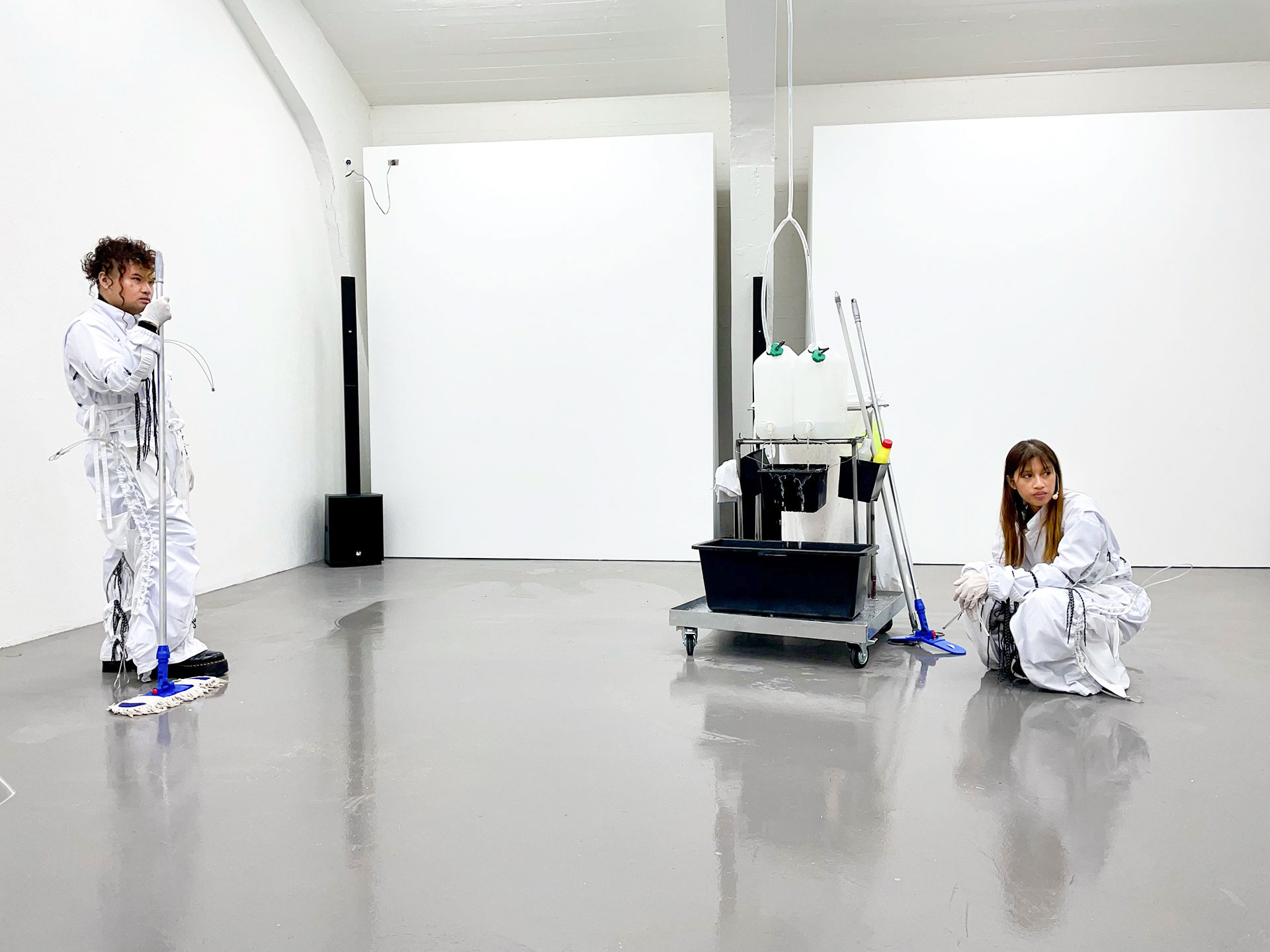 Lucky 3 at their opening performance PUTI at Open.

Lucky 3 is an artist collective that consist of Darren Mark, Dýrfinna Benita Basalan and Melanie Ubaldo. The group put on the festivals opening performance PUTI at Open which lasted for 8 hours from 12:00-20:00. I got there around two and walked into the space in my dirty boots due to a mud puddle placed right at the entrance. The white space was impeccable clean aside from the dirty footmarks of the visitors. With this long endurance performance, they were referencing the 8 hour workday and the racial hierarchy in the workplace. The artist, who all share a Filipino heritage, wore white deconstructed janitor workwear made and designed by Darren Mark while mopping the floor which the visitors continuously make dirty with their muddy shoes. While they were mostly silent, they would sometimes say the word “puti”, the Filipino word for “white” while white visitors were in the space. By both being in their way as they mopped the floor around me and making more mess as I moved out of the way I felt a familiar uncomfortable feeling of not knowing the “right” thing to do which can result in unconscious bias. The cleaning cart which had running water placed in the middle of the space had a sculptural quality making me think of a water fountain. This subtle juxtaposing reference of the bourgeoise water fountain and the cleaning cart is just one reason of why I think this work is great. The performance also lives on for the rest of the festival as recordings from the security cameras placed in the space. 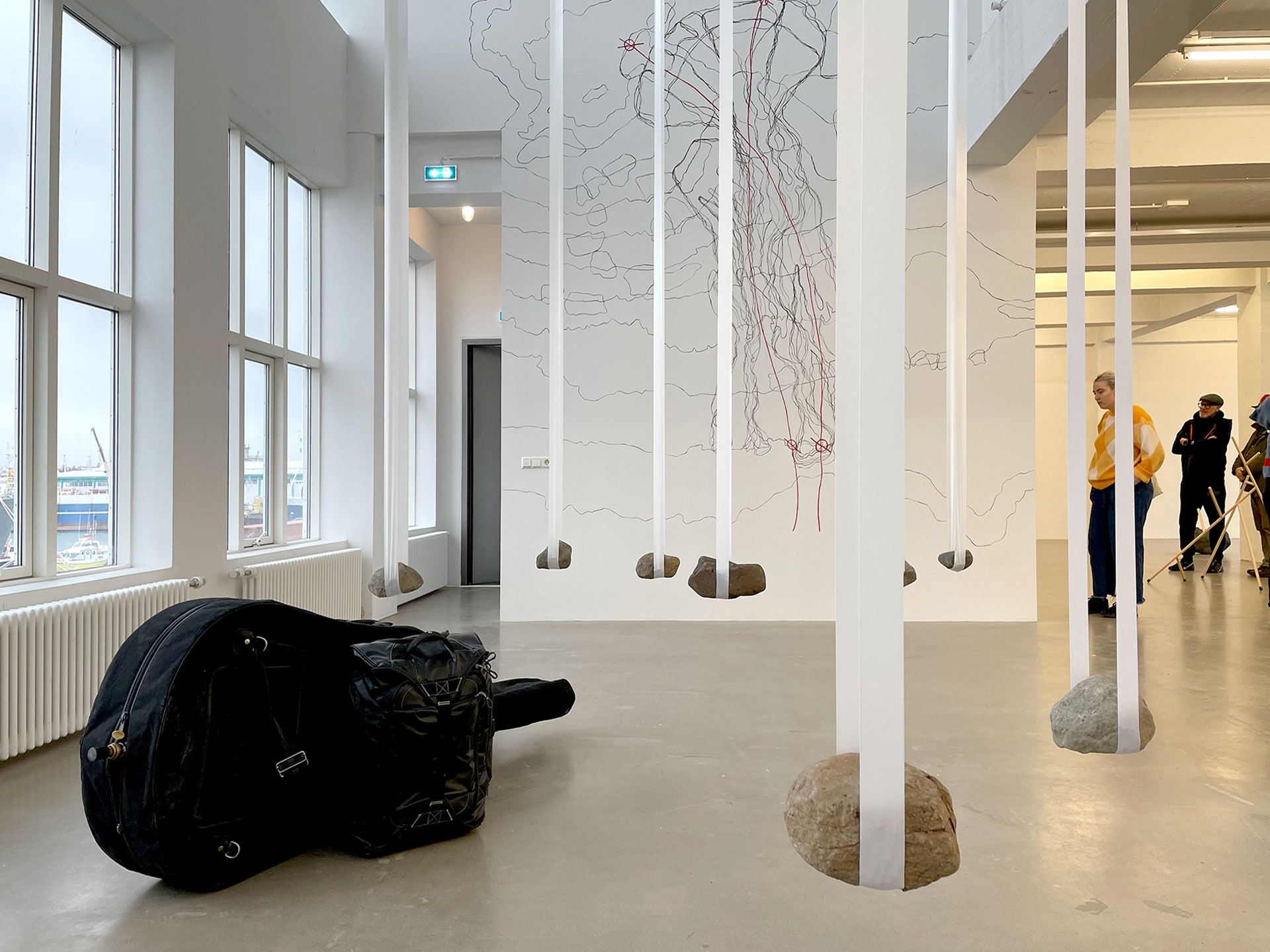 Next stop was the Marshall house where The Living Art Museum and Kling & Bang host the exhibition /CREATION /DESTRUCTION. The title is a reference to a text by Sigurður Guðmundsson from 1969 which is a part of the exhibition and can be read in the catalogue and on the festival’s webpage. In his text Sigurður tries to describe the phenomenon of time as experienced by people in a society, making connections between time and art. Finally claiming that while time eventually destroys everything, art might have the longest life expectancy. As I walk into The Living Art Museum, I realise I just missed a performance, seeing Borgar Magnason packing his double bass in the middle of Gunnhildur Hauksdóttir’s installation Skriða. It consists of audio work, drawings on the wall and rocks suspended in the air in satin ribbons, forming pendulums. The work references the massive landslide that fell from the mountain above Seyðisfjörður last December which had a big impact on the community and is still very fresh in our minds.

Other works in the space include If starting at the end by Björk Guðnadóttir, an installation with textile works, wall paintings and video, and Pictures at an exhibition by Pétur Magnússon, which is made up of pictures of works from the collection of The Living Art Museum. He references the tradition of painting paintings at the Salon exhibitions at Paris and plays with the proportions and perspective we often have on works in an exhibition space. A few more sculptures were placed around the space. Different textures and various linear forms are the main characteristics of these works by Guðlaug Mía Eyþórsdóttir called Variations. I hear Guðlaug explain that music was her inspiration and that she is materialising musical elements as sculpture. In the front space of the Living Art Museum 6th grade students from Fellaskóli, under the supervision of Gréta S. Guðmundsdóttir, take the role of curator of the museum’s collection. The students selected the works that are on display based on their interest and favour. This project is very inspiring, and I hope that it continues. I would have loved this in 6th grade (and today).

Up in Kling & Bang the phrase “MUNDU TÖFRANA” (REMEMBER THE MAGIC) was being painted on the front wall over and over under the guidance of the honorary artist Elísabet K. Jökulsdóttir. Next, I walk into Ásta Fanney’s work Oasis of endless change. Playful and colourful shapes are on the floor, against the wall and suspended from the ceiling balancing each other. In my second viewing I notice clear individual plastic letters on the floor. This reminded me of a playground but where none of us knew how to play the games. In the catalogue it says the work is a result of a playful research on shapes of letters and musical note symbols creating visual scores that serve as sculpture stations for performance. Soon The Icelandic Sound Poetry Choir or Nýlókórinn, performed a version of the work reinforcing my playground game theory which might also stem from the binging of show Squid Game I did that week. During the performance I was continuously waiting for someone to be out of the game and falling to the floor. 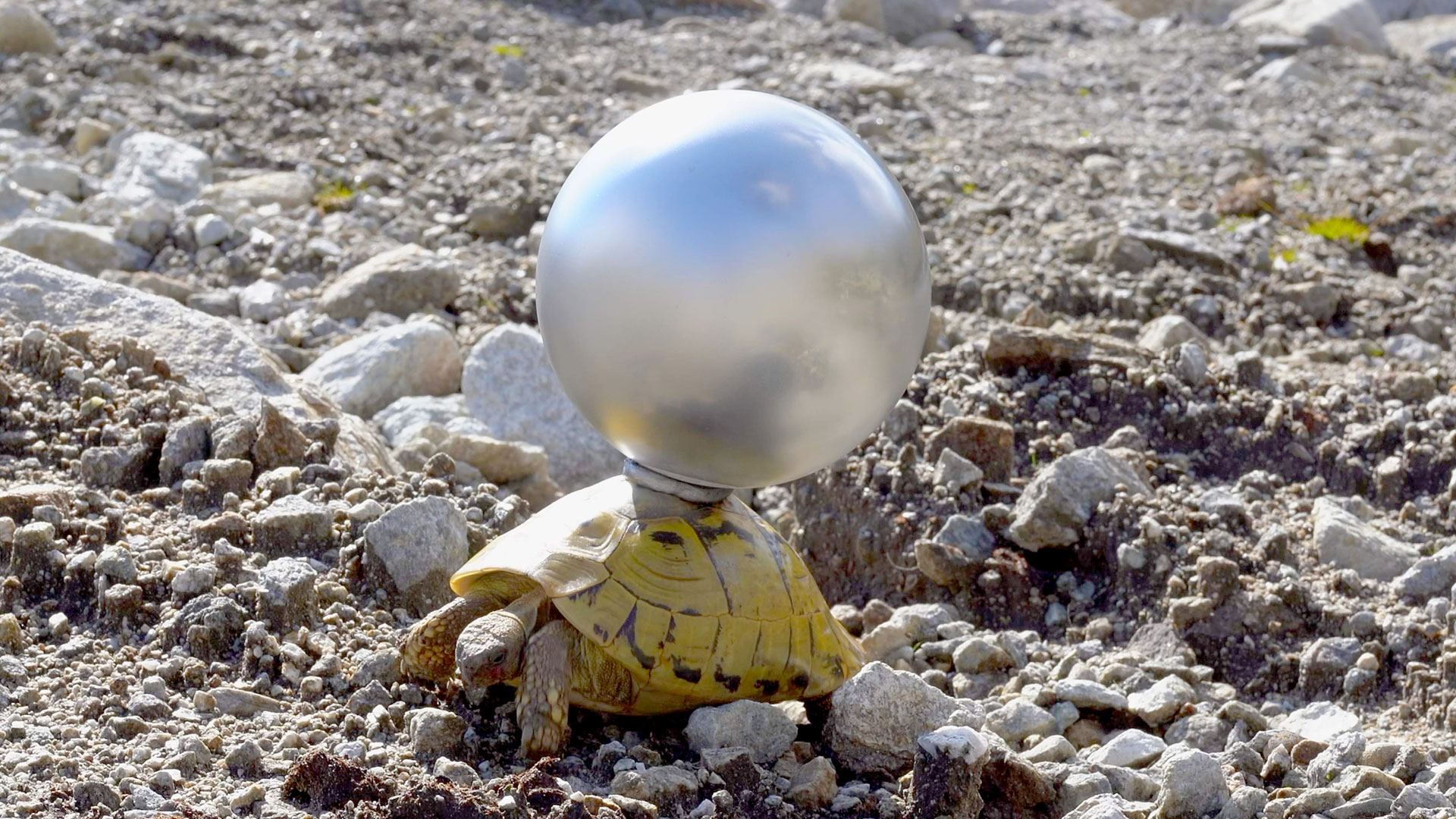 Still from Traverse by Andreas Brunner.

The next space was taken over by Andreas Brunner and his work Traverse. Light plastic sculptures in the shape of smoke held up with black metal stands, lightbulbs in concrete boxes and a 2-channel video following a little turtle with a globe on his back. I had had the pleasure of seeing the video work before and being told about the Cosmic Turtle by Andreas since I somehow either forgot or never learned about this strange and funny mythology. The cosmic turtle or world turtle appears in Hindu mythology, Chinese mythology and the mythologies of the indigenous people of the Americas. This turtle either contains or supports the world and is worth a google search and also pleasantly connects to Elísabet’s performance Stories of Creation. The last work at Kling & Bang was a beautiful multi-channel audio and video installation called Agape by Bergrún Snæbjörnsdóttir.

I went back down to the Living Art Museum to see the performance with Guðlaug Mía’s sculptures where Skerpla Ensemble performed and interpreted the sculptures with music. The material aspects of the sculptures affected the interpretations so length could be pitch, fragmentation be rhythm and emptiness silence.

After the performance I decided to call it a day and although Sunday had in store some more opening the aftermath of these two days caught up with me and I spent most of my Sunday at home. The festival is up until the 24th so there is still have time to see the rest! Time is precious to us all and there is always something competing to have some our time and attention, school, work, friends, and social media. But I am happy I spent my time this weekend at Sequences.

Björk is an Ma student in Curatorial Practice at IUA