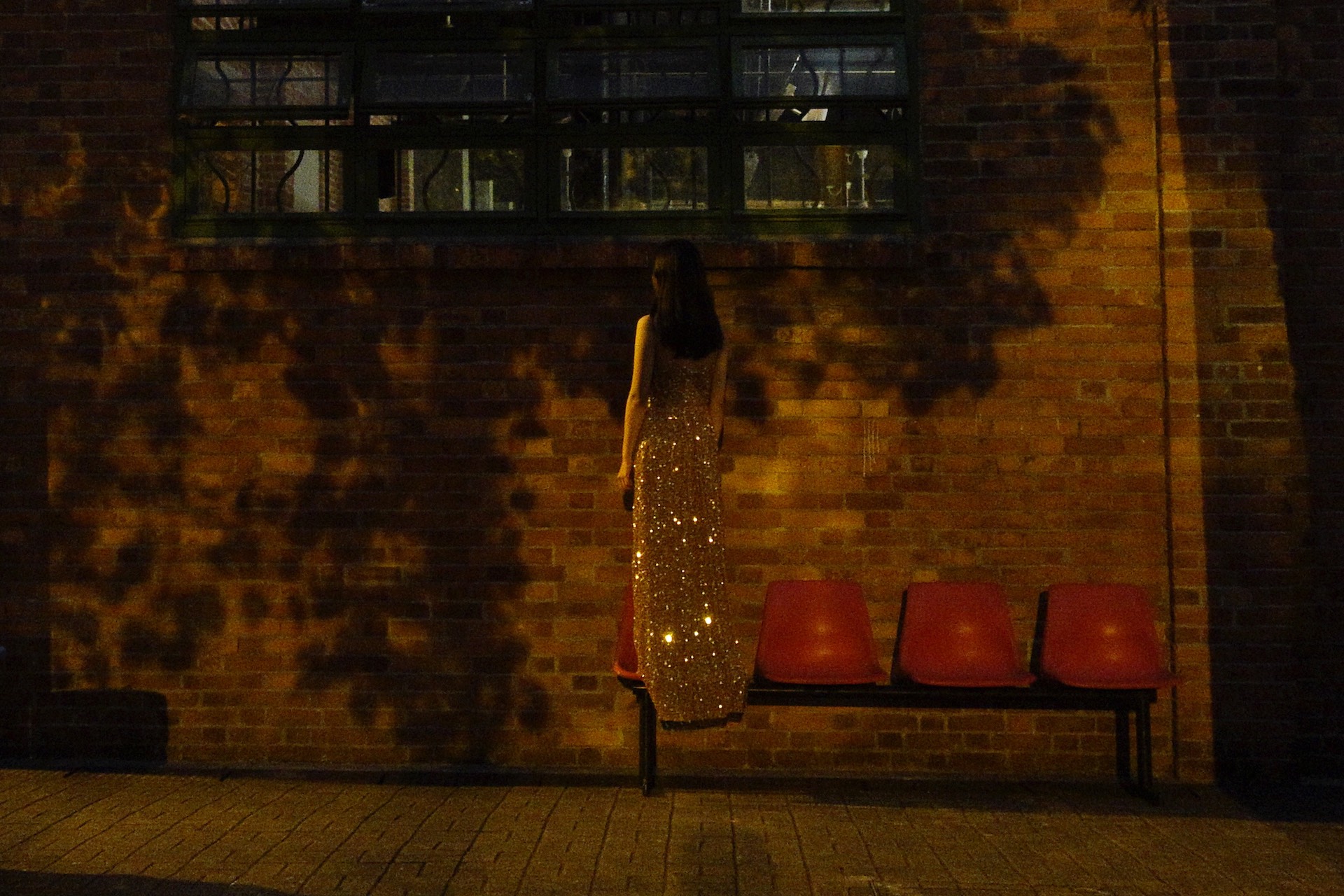 What rainbows we choose to see, a show and tell with Florence Lam

In what continues to be my favourite work of Hong Kong-based artist Florence Lam, a mirror, a stool and a spray bottle are arranged by a window in a carefully considered way. The Particularities of a Place (2015)  humbly supplies us the tools to make a rainbow (should the sun be strong enough), asking us to have faith and wonder in this proposition. From the first time I’d heard of this work, I believed in its abilities prior to ever seeing it in person. This collection of objects constantly reminds me that sometimes, just knowing of the potential is enough. Often after speaking with Florence, I’m filled with an overwhelming feeling of capability. Her work, much like her person, refuses to believe in the impossible as she is willing to try again and again, adapting as needed, and distancing herself from the notion that there always needs to be a formalised final outcome. 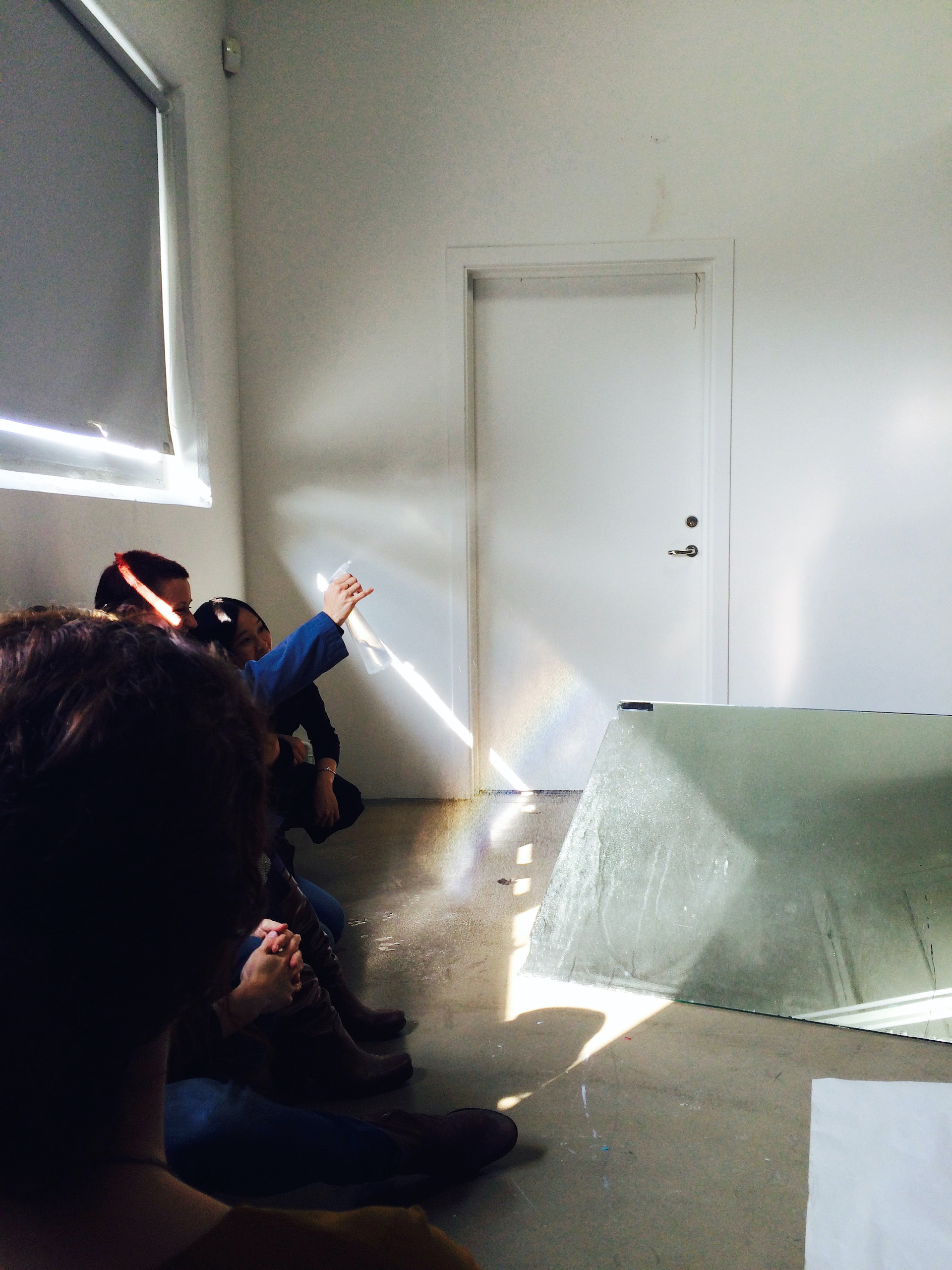 The Particularities of a Place (2015) was the very first piece of artwork Florence made when she arrived in Iceland and has been exhibited at Hafnarborg Art Museum in 2016 and RÝMD in 2017.

Originally from Hong Kong, Florence moved back at the end of 2019 after living nearly 10 years abroad having studied in London and Reykjavík, and was most recently living and working in Germany. For over half of the time that I have been fortunate to know her, we have lived in different countries. Perhaps one of the most nomadic souls I know, time or distance has never seemed to hinder her ability to foster genuine and lasting connections. Spending over two hours together while sitting alone in our respective rooms, over 9000 kilometers and 8 hours apart, we spoke about nature, food, boredom, (be)longing, displacement, the value of community, and many other things.

Florence continuously described this time in Hong Kong as a special one, and said she is thankful to be back. Apart from having been battling the Coronavirus from the near beginning, Hong Kong residents have been resisting an extremely violent and corrupt government for much longer, prompting protests throughout the nation. Despite the current global health crisis, residents are still resisting the many injustices that are occurring, and these political protests continue to materialise, while taking on new forms with consideration to health and safety. Florence assured me that you could still feel the political energy and tension across Hong Kong, and that it likely only feels quieter and more peaceful to those who are not personally involving themselves in the situation. I asked her if she was scared, and she said no, and that she was rather grateful, explaining that over time she’s learned to cope with fear, and to accept it as reality. Being scared isn’t anything special, she told me, and especially being someone from Hong Kong, it does not make you different. It’s easy to lose sight of the fact that such opposing feelings and emotions are able to coexist, but amid the uncertainty and chaos, our conversation also brought forward curiosity, joy and the most refreshing breath of dry humour. 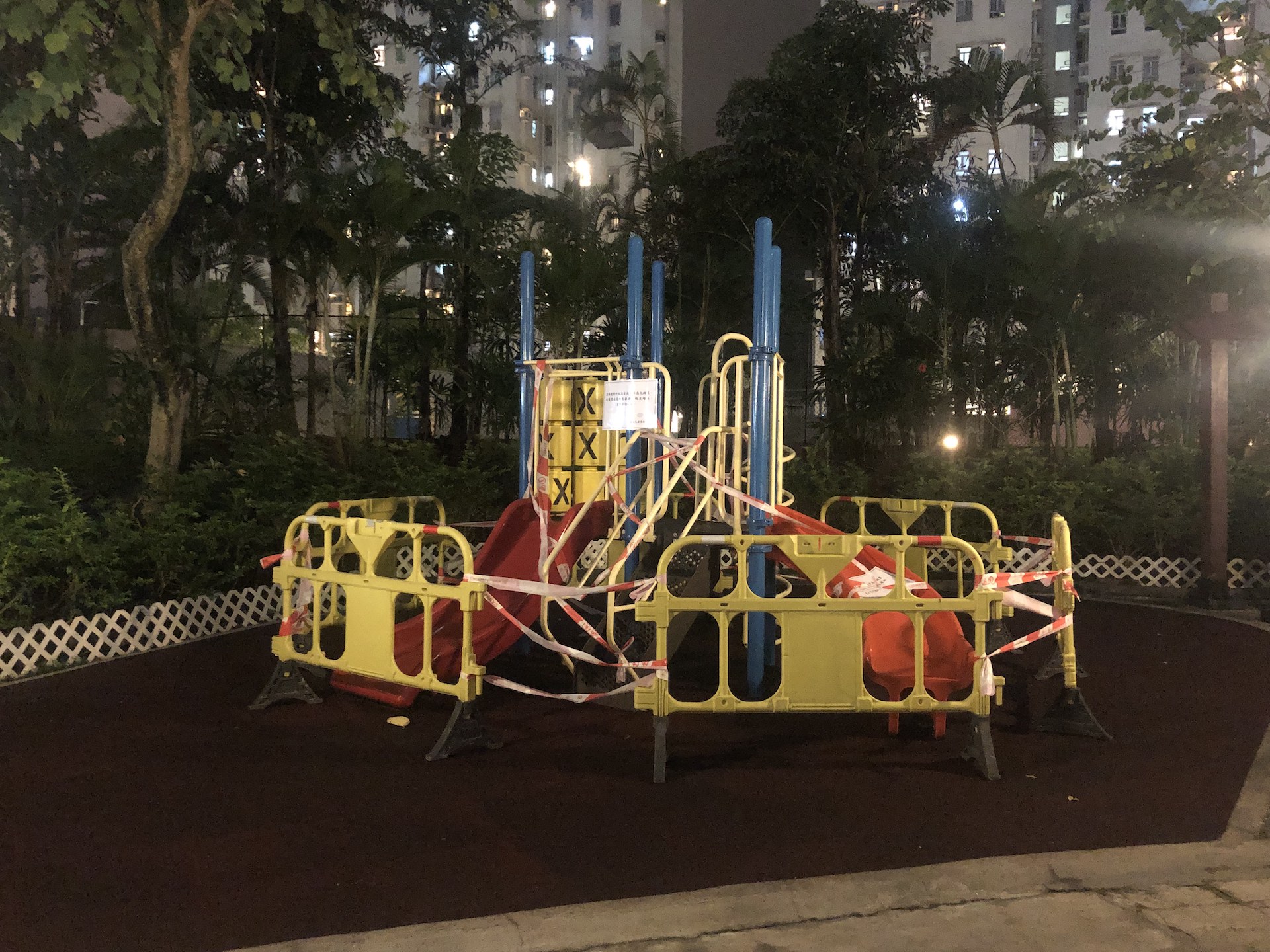 Playground facilities fences off due to Coronavirus outbreak in Hong Kong.

The subject of closeness and community was at the forefront of our talk. Currently feeling most connected to Hong Kong geographically and through her values, she’s gaining a new perspective of what it means to be part of a community since moving back. With full faith in the people of Hong Kong, she said that she trusts that they know what to believe in and how to act (as they have been living through various crises over the last 10+ years), and that people need to learn from their own experiences. For instance, she explained that people in Hong Kong are selective on who they’re willing to meet, as going out in public not only puts themselves at risk, but places those they meet in danger as well. There’s a romance, she said, smirking, in deciding who you are willing to die with or die for.

Acknowledging the difference between the practicalities of where you are currently based versus what it means to contribute to and be a part of a community, Lam is well aware of the labour and sacrifices necessary in order to shape and preserve the culture in Hong Kong, recognising the reality that labour does not necessarily ensure the desired outcome. Her practice has been greatly influenced by each time she has moved or been (dis)placed, with these experiences permeating through her work and headspace over the years. Florence explained that she would be honoured to be considered as a Hong Kong artist one day, as she’s witnessed first-hand the time, work, responsibility and politics associated with being considered an artist there as she slowly navigates through and immerses herself into the society once again. Performance art, she said translates to “action art” in Cantonese, carrying a more negative connotation of “silly” or symbolic actions that could bring forward some socio-political issues, but the gestures inevitably fail to change the reality. Performance art is also often placed under the same umbrella as theatre and dance in Hong Kong which can become complicated, but this has fostered a more underground community of contemporary performance artists that is slowly gaining momentum.

Often working site-specifically, Lam has an ongoing interest in how architecture and space influence her actions. The current health and safety practices of self-quarantining and social distancing have prompted her to consider how time veritably shapes more than space does. In considering this notion, I come to think about Felix Gonzalez-Torres’ beloved Untitled (Perfect Lovers) (1991), wherein two identical and synced clocks are hung side-by-side, ticking in unison. In the accompanying drawing and text, he boldly writes that time has been so generous to us, and that we are a product of time, therefore we give back credit where it is due [1]. These words ring particularly resonant these days, as time is currently at an abundance for many while at a deficit for some, thus carrying a much different weight than it used to.

We spoke about the limits of care within the arts, and how the landscape of this notion is steadily changing. The need to feel we have helped often gets in the way [2], but perhaps physical presence and action is no longer at the forefront of necessity. It’s imperative to bring awareness to, and make space for (re)considering what forms of support that are actually needed as a means of care. It’s interesting to witness Florence reevaluate what it means to be a performance artist, as this then became a question of if art transcends proximity (and if so, how?). Working collaboratively has also proven to be an interesting and welcomed challenge for her practice as she reconsiders how to confront questions of technology, accessibility, and documentation. It’s curious to think about how to be careful and considerate within an arts context especially when the resilience of a community is often driven by culture itself.

In All About Love, author bell hooks shares her thoughts on community so poignantly, stating that our willingness to make sacrifices reflects our awareness for interdependency [3]. This encapsulates what I believe it means to be part of a community in its entirety – to live with, think about and to consider those around us, understanding that our actions have consequences. It’s easy to lose sight of the fact that while a community can be fostered by mere proximity, to truly be part of a community is to be connected by our morals, ethos, and the choices we make. We also spoke about how the performance art community at a large has been a major influence in her practice. Having participated in various international performance art festivals and workshops over the years, as well as working as a performer for Marina Abramović during her retrospective in Bonn in 2018, Florence is tangled into the fabric of this small yet tight-knit global community. Connected more through a synergy in headspace rather than geography, she explained that these short, intense meetings offer her a fluidity in discourse, which has proved imperative to shaping her practice. These workshops which often included improvisation exercises have taught her to observe, be instinctual, and to be more cautious of her impact. As her background and education have shaped her practice much differently than the majority of young artists in Hong Kong, it’s curious to think of how her work will translate in this new environment, and how it will shift and be shaped as she combines her past with her present. 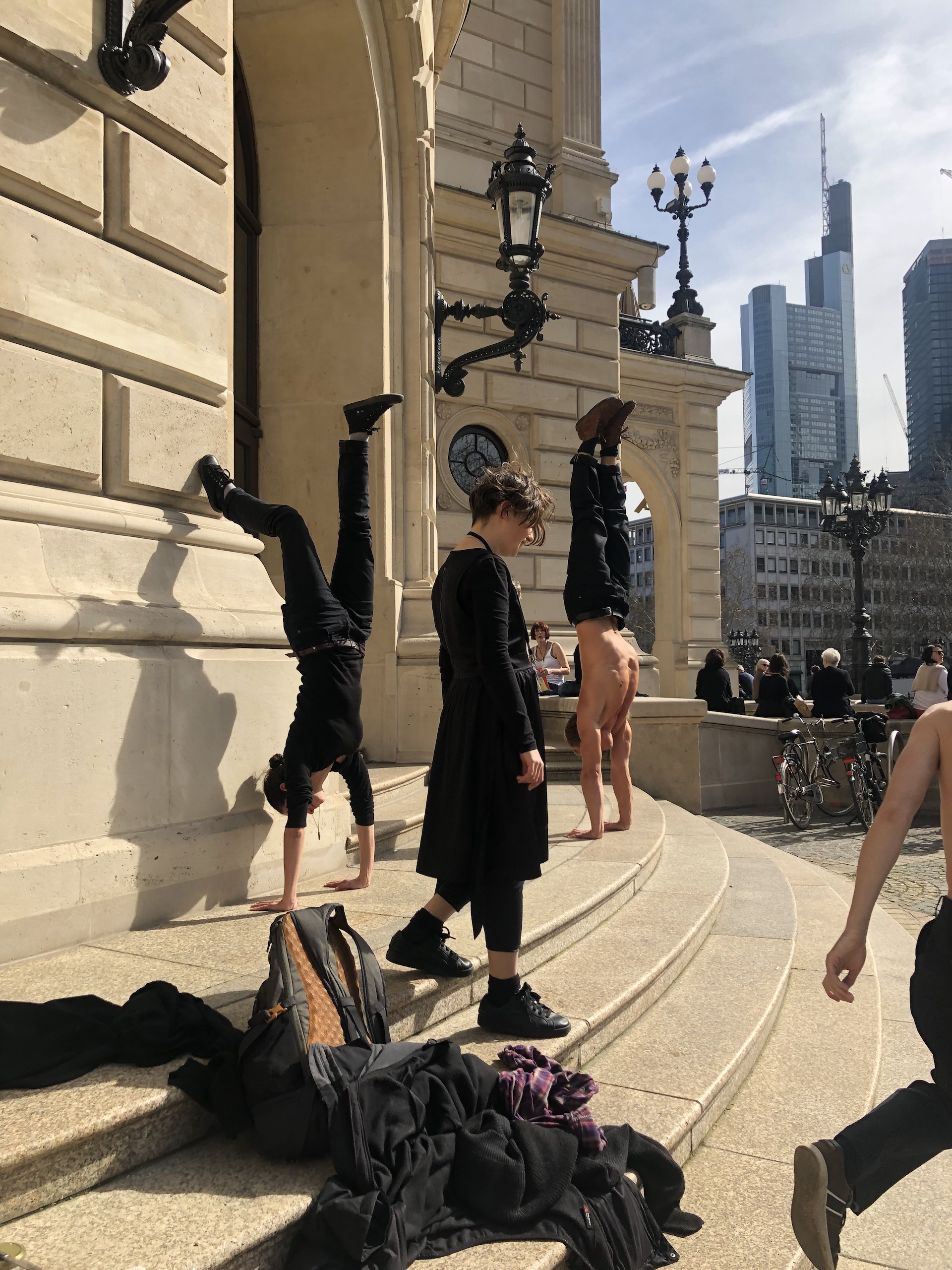 Florence’s colleagues taking a break outside of Alte Oper Frankfurt when she worked as a facilitator for “A Different Way of Hearing: The Abramović Method for Music”, March 2019.

Since moving back to Hong Kong, she’s been finding refuge in nature and the unique landscapes much like she used to in Iceland. She continues to be drawn to nature for its ability to offer her a sense of freedom and independence. Lam explained that independence is a big conversation in Hong Kong, as locals aspire to create and foster a richer agricultural autonomy to be less dependent on China or the rest of the world in order to support their own people. This has led to a growth in the farming and agriculture industry from many out of work arts and culture workers as a means of highlighting and appreciating their own resources and locality. The traditional Canton-style food from her childhood that she is now revisiting is often tailored to accommodate the season, the weather and your health. With more time to prepare and savour home cooked meals, food is offering her an emotional connection to other locals. She’s also been practicing and learning about Chinese medicine, and taking them between her meals. More preventative than traditionally medicinal, this new ritual enables her to sit deeper into her current cultural environment. As we moved through this tangent about what she’s currently growing, cooking and eating, Florence unknowingly redefined what it means to be together. 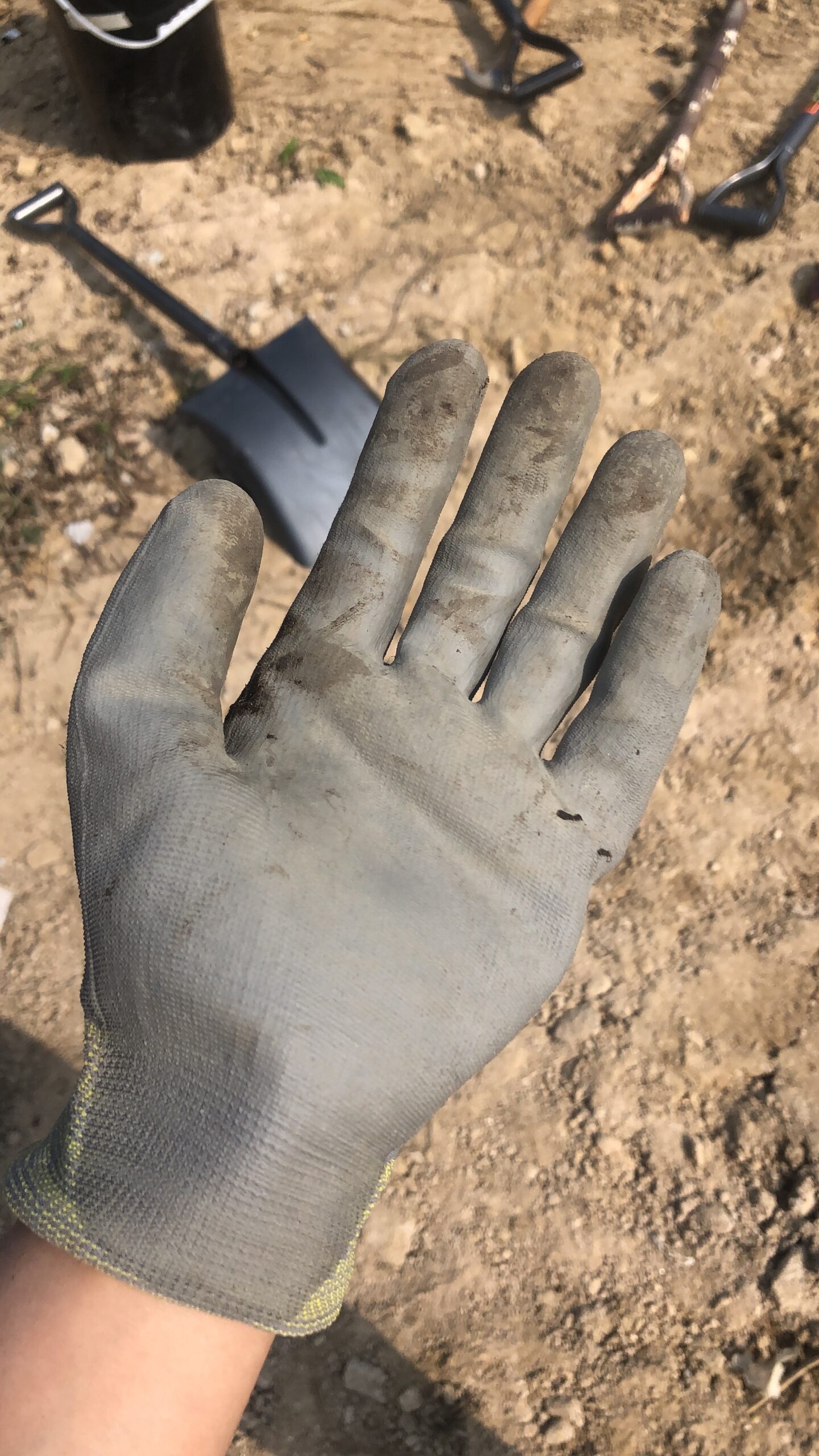 Florence’s hand with gloves at the farm that she’s helping out at right now.

We can easily lose sight of the act of looking, as the average experience of being in the world is not one of mindful awareness. Florence’s work challenges this notion in a weird, bold and genuine way by sharing what and how she sees, while leaving enough space for us to choose to navigate through, and decipher her headspace ourselves. I think it takes a lot of courage to know how and when to let go, and Florence is generous in her willingness to share in order for us to experience the wonders that she imagines and conceives in her practice. This prompts me to look more at the ways in which we can collectively choose to see our world. Nearly magical in her ability to ignite wonder out of the everyday, she’s also critical and carefully considers the act of looking in and of itself, reminding me that rainbows will always be there for as long as we’re looking to see them.

Florence Lam (b.1992, Vancouver, CA) grew up in Hong Kong and is currently based between Hong Kong and Düsseldorf, DE. Lam works with wonder and magical thinking to fuse together current moral issues with child-like world views through performance art, poetry, video and sound. Florence obtained her MA Fine Art from Iceland Academy of the Arts in 2017 and her BA Fine Art from Central Saint Martins in 2014.