The Tragicomedies of Guillaume Bijl 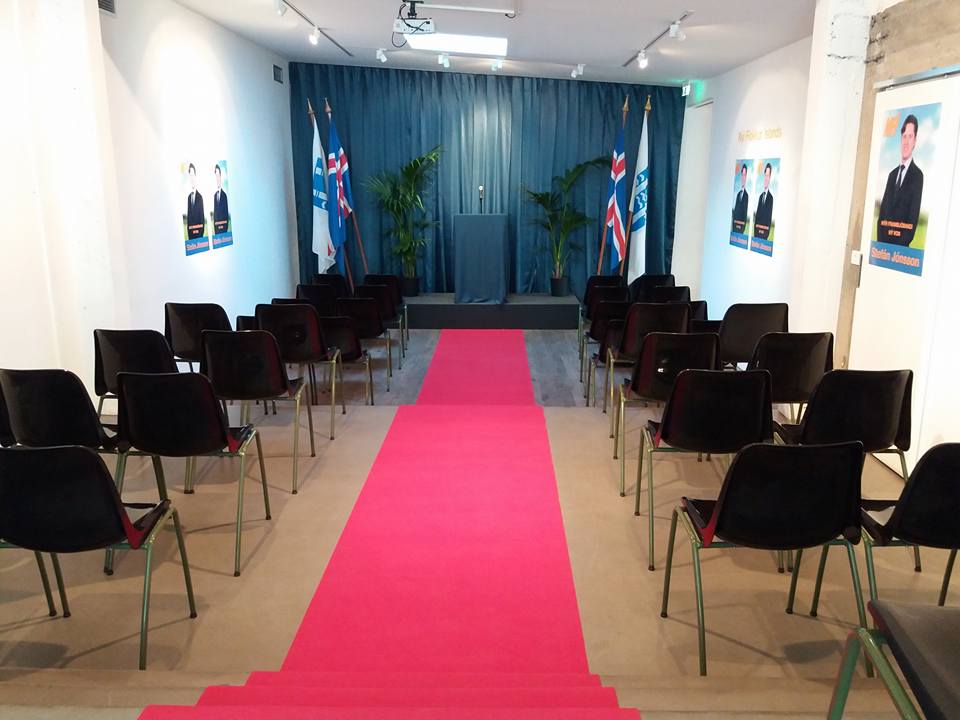 The Tragicomedies of Guillaume Bijl

The Politician = a Transformation – Installation by the Belgian artist Guillaume Bijl was on view at Mengi from March 31st to April 1st, 2017.

In many ways, Guillaume Bijl (1946) is still a painter, which was his initial focus in the 1960’s, only now he paints still-lives in the three-dimensions of an installation. The Politician is a ‘Transformation-Installation,’ or ‘a reality within non-reality,’ one of the categorizations in which Bijl places his works based on their function within the context of the exhibition space. In The Politician, the exhibition space is transformed into a hall introducing a new politician, Stefán Jónsson.

This neverbeforeseen candidate in Icelandic politics could be seen on a poster offering new hope (ný von) to visitors of the event. The chairs aligning either side of a red carpet led to a stage on which a podium complete with a microphone and a glass of water stood against a draping gray curtain. Nondescript ferns and Icelandic National flags dappled the scene with the precision and detail of a film-set. The venue became defined by this political atmosphere, asking us to reflect on our beliefs in the function of the whole political system. Bijl shows us how the display for a politician is a consumer setup as well. This can be said for many of his Transformation-Installations which place the visitor in the consumer or service-oriented scenario in which the usual choreography is nowhere to be seen. Instead, it is as though one is visiting the backdrop of daily life to inspect the reality of it. 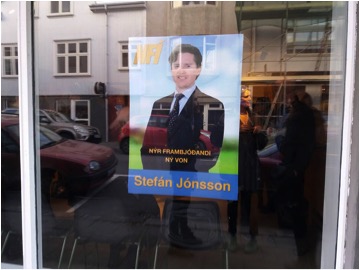 This neverbeforeseen candidate in Icelandic politics could be seen on a poster offering new hope. Image: Mengi.

Bijl’s ‘Art Liquidation Project’ began in 1979 when he wrote a fictional pamphlet stating that the government had deemed art irrelevant for society and therefore spaces devoted to the arts would now be turned into places more blatantly beneficial to society. The first in this series of projects was Driving School Z, set up in Ruimte Z Gallery in Antwerp, Belgium. This driving school set-up was so meticulously staged that passers-by would enter and ask about driving lessons. Bijl’s perfect imitation of reality was now of benefit to society, and the question of the role of art in society was lived out in the installation and the many series to follow. Other Transformation-Installations have included: 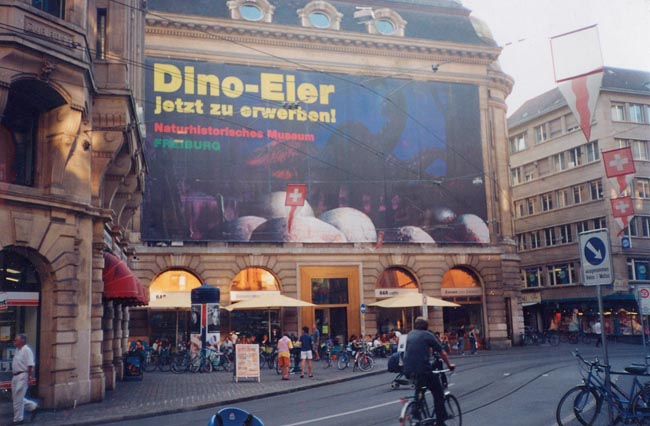 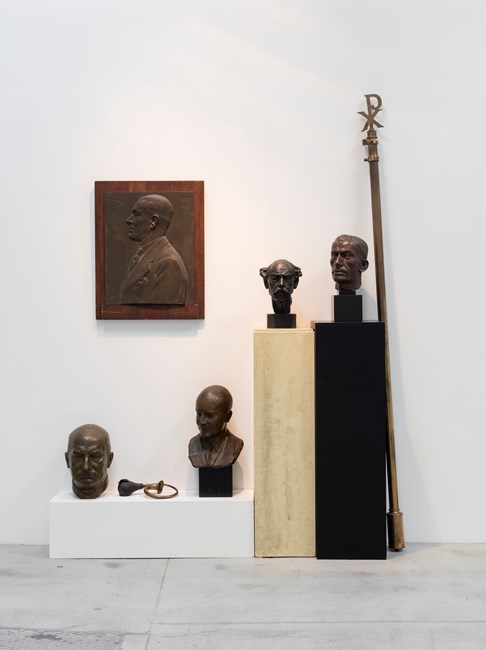 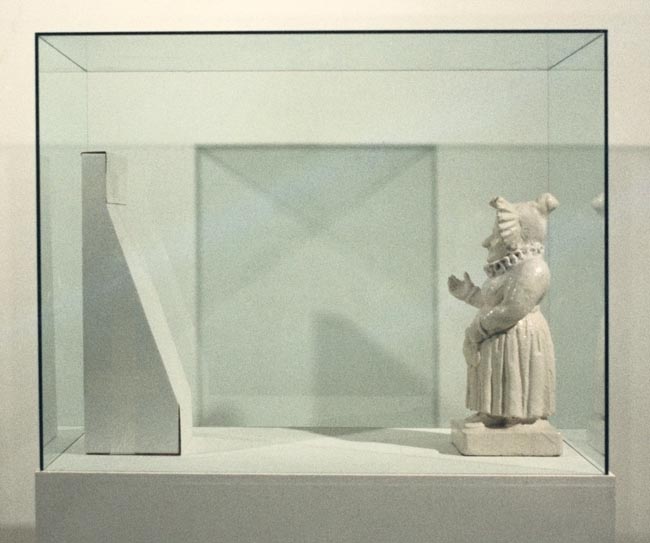 Bijl also categorizes his works as ‘Situation-Installation: a non-reality within reality.’ In this instance the transformation is fictive, such as: a fake horse in a horse trailer, a poster selling dinosaur eggs, a mediocre sculpture garden.

Bijl also categorizes his works as ‘Situation-Installation: a non-reality within reality.’ In this instance the transformation is fictive, such as: a fake horse in a horse trailer, a poster selling dinosaur eggs, a mediocre sculpture garden.

Bijl’s ‘Compositions,’ are an archaeological still-life, similar to a ready-made but using objects to replicate parts of the Transformation-Installations. These have appeared as Chinese supermarket décor, a collection of marble sculptures, fragments of an antique shop, and fragments of other large-scale installations.

Bijl’s fragments of reality taken into the undefined space of the art institution function as a sort of gigantic ready-made. His works, commenting on the relationship between art publics and wider society, operate like a huge cultural therapy session in which it is revealed that all are actors on a stage. In a quote from 1980, Bijl described his efforts in the Transformation-Installations as a visualization of “…social determinacy and mass conditioning in a tragicomic way (1).” Bijl shows civilization in its current state; the installations become tragicomic mirrors of society using the hyper-real as an ironic tool. His works show how consumer capitalism is a concept in itself by letting the viewer step back and observe their own role in the functioning of the system and in its accompanying social rituals. Instead of participating in the set-up, the visitor is just that, a visitor to his own reality.

I asked Bijl if there was something specific about Iceland that made him decide to have a political installation. He responded that there was no special reason, although he has introduced new politicians in a similar manner in Germany in 1988 and in Holland and Belgium in 2016. 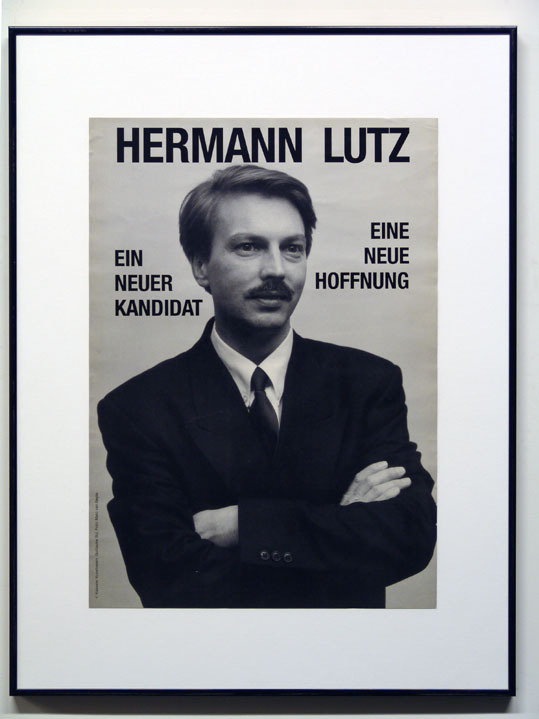 I also asked Bijl how he perceived the trajectory of material culture as things become more digitized. He responded that he shows the “archaeology of this civilization already in the present and in the wrong places… in art spaces and installations/decors; I’m a witness of this/our time,” he said, “and my archaeologies will only seem more abstract in the future.”

Others have also made a note of Bijl’s work and its connection to an archaeology. In terms of preserving history with the elements of the present, this is not a new notion in 20th-century art. Many artists have experimented with the transcendence of their own time and place by speculating on the future. Making a claim to present culture by using it in artwork allows an artist to make decisions about what is valuable and relevant for our successors. As well, the act of working with history to reinvent the story being told about the past can work in the same way- just as Bijl’s works are a statement to his being witness in these times, so can artists be a witness to taking immediate action against what has been written as history. For example, Marcel Duchamp’s ready-mades went against centuries of ideas about artistic creation and the role of aesthetics.

„An ordinary object,“ Duchamp famously stated, “could be elevated to the dignity of a work of art by the mere choice of an artist.” A bicycle wheel, a bottle rack, a urinal- the utilitarian objects of man, future archaeologists will ponder, were suddenly taken out of utilization and placed as ritual objects in the early 20th century.

The strategy of rewriting the past within the present can be seen in works by Ai Wei Wei as well, in Han Dynasty Urn with Coca-Cola Logo from 1994, for example. If the future past lies within the present, the role of historians in the future is to differentiate between states of remembering or else rewrite the historical past altogether. The question „What is our heritage for the future?“ is in the hands of contemporary artists who have the power to make value judgments about what should remain of the present. Bijl’s work is in some ways a speculation on how the present will appear to future generations. How will it be interpreted and what kinds of conversations will it bring up? Will the tragicomic element still exist in 100 years? A completely different set of questions is in which medium this will be preserved and viewed in the future, the photographs digitized and stored on the vast Internet archive along with this article.