In the downtown district of Oakland, California, sound artist Ingibjörg Friðriksdóttir opened her latest installation work, Reflecting, in a group exhibition at the Ctrl Shft Collective, Traslación. Entering into a urban warehouse building, piercing blue eyes blink out at the viewer from a projected video screen in a black box room. There is a subtle overlapping chatter, conversation from that of a fortune teller woman. The viewer is bombarded with sound from all corners, and one can almost picture the kitch fortune ball and tacky decorations. There is an element of ‘otherness’ and yet an immediate relatability to this voice. We know her, this woman, without having to know her, her vague and generic fortune tellings to which one is so desperately prepared to apply any aspect of truth or meaning to our own lives.

Ingibjörg Friðriksdóttir is an Icelandic artist who defines her practice as somewhere between a composer and an installation artist. Ingibjörg has worked collaboratively throughout her career with filmmakers, dancers, visual artists, fashion designers, and photographers. She recently moved back to Reykjavik after completing an MFA at Mills College and working in the Bay Area for three years. When she first moved to California, Ingibjörg describes ‘listening’ to the culture to learn its rules, history and sensitivities; “I had to listen to learn, to be able to form my own opinions in that culture and I had to learn that even though I felt very foreign in this culture, I would be a portrait as a certain type of human based on my gender, my ethnicity etc. You have to learn what is expected of you as that person you are seen as, even if you feel you don’t have anything in common with the group you are now categorized within.” Whilst Ingibjörg’s home roots are in Iceland, her practice is quite dually based, and I found it compelling to learn how she navigates, professionally and personally, between these two worlds she has laid claim to.

Ctrl Shft is an artist run organization and non profit art collective in the center of Oakland, providing artist studios to members, who pay rent and collaboratively put on exhibitions in the common exhibition space. The urban warehouse building is located in the downtown center of Oakland, and is almost hidden from the street, with no visible sign or marker. A new visitor wouldn’t quite know what to expect upon entering this experimental art space, as I didn’t. The collective and its members is largely queer and nonconforming to binary and heteronormative stereotypes, working to represent marginalized communities in their studio spaces. Ctrl Shft feels reminiscent to OPEN, Nýlistasafnið, and Kling og Bang, to name a few artist collectives in Reykjavik that are achieving similar success. However, community oriented, artist studio and dually functioning exhibition spaces are few and far between in Reykjavik, especially those that specifically attempt to bridge the gap between marginalized communities and professional art opportunities. 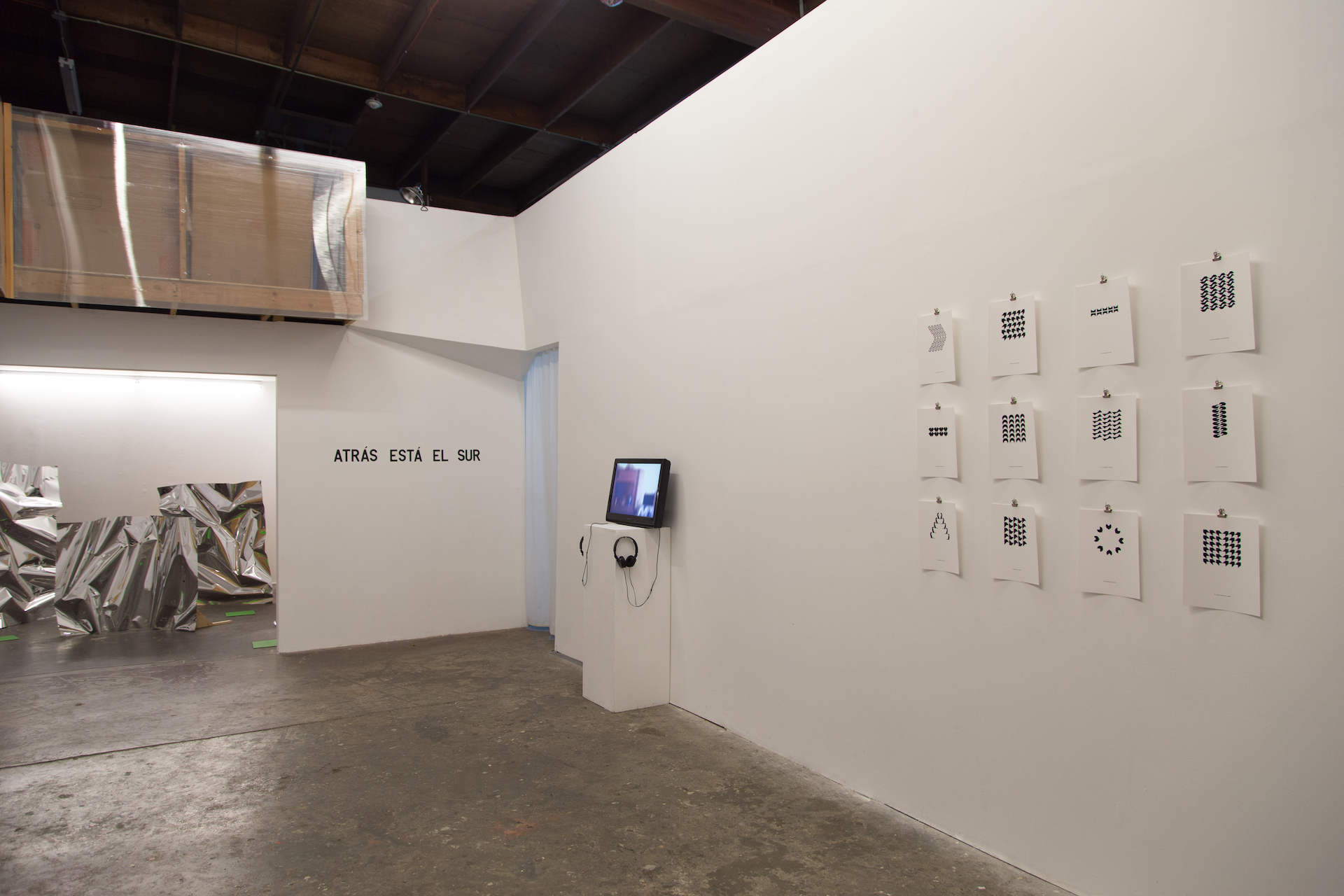 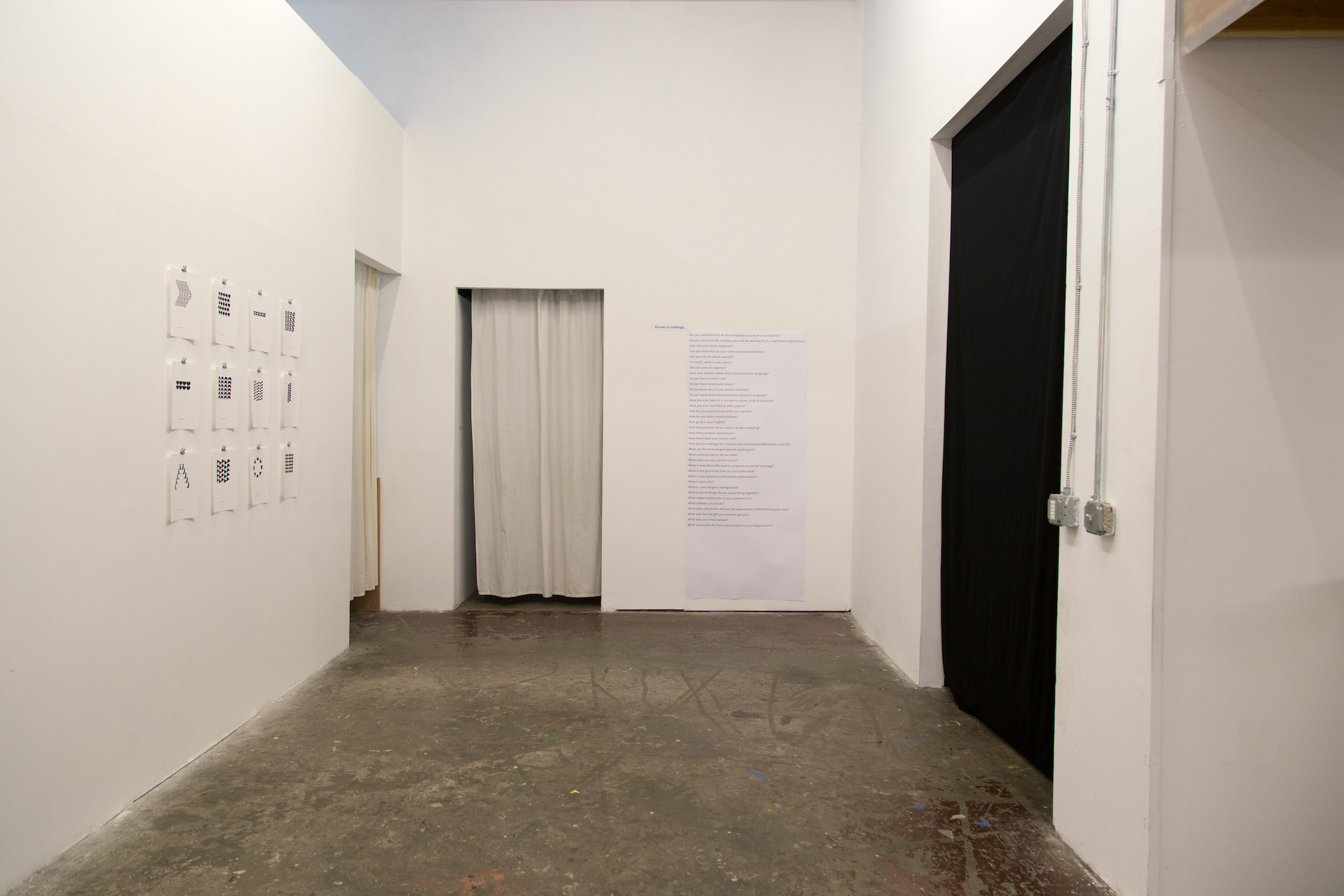 The show, Traslación, was co-curated by Colombian artist Susana Eslava and Carolina Magis Weinberg. Susana moved to the Bay Area in 2015 through an MFA grant, and is currently developing projects between Bogotá and the Bay Area. Her practice is interdisciplinary and explores themes of migration, colonization, and the intersections between social relations, art and politics. Among the participating artists were Ingibjörg, Susana, Carolina, Ana María Montenegro Jaramillo, Enar de Dios Rodríguez, Shaghayegh Cyrous, and Patricia Leal. All of the artists are international to the Bay Area, but share the common connection that each has based their practice here in California at some point along their journeys.

The exhibiting artists in Traslación, as Susana explains, are “in a state of otherness. They think in different languages, and create in a constant state of translation. They create in the impasse of the outside…engaging into conversations about what it meant to have an art practice –and a life– from a dislocated position. Traslación refers to the circular movement of a planet around a gravitational force which inevitably, takes it back to its initial position.” The exhibition explores thematics of inside/outside relations, acceptance, nativeness, discrimination, and belonging. Issues of gender, power dynamics, identity, locality, and politics are at play. These elements provide an effective connecting point to art life in Iceland, where so many feel like a constant outsider to Icelandic culture despite maintaining an artistic practice in the country for many years. This struggle is universal, apparently, for acceptance and belonging, to be from somewhere. How do we belong to and from any place?

Despite these elements of inaccessibility and otherness that seems connected to experiences both in the Bay Area and in Iceland, Ingibjörg comments on their similarly community and locally oriented natures when comparing the Bay Area to the art scene in Iceland. She states, “one similarity that surprised me was that I was not expecting to be running into the same people over and over again, like frequently happens in the art scene in Iceland. So soon it felt like ‘home.’” She values being able to connect with artists on such a familial and intimate level in her homeland; “I think it is unique in Iceland that it is very easy to connect with people, even the most successful artists are not that unreachable, and because of how similar we all are we sometimes operate as a one big family.” With that being said, the Bay Area opened up many opportunities for her, and she describes how ‘small’ Iceland feels in many ways since; “I think how similar we are creates limitation in how we sometimes think in Iceland. I didn’t realize how little I really knew about the world before I lived in the Bay Area and was blessed with so many international friends that have taught me so much.”

To add to a level of accessibility in the show, the exhibition text is presented in each of the languages of the artist’s home countries. In Ingibjörg´s Reflecting, the description explains that before moving back to Iceland from the Bay Area, she visited two psychics to “make sense of the crossroads.” Ingibjörg explains that we are constantly trying to “predict the future through tangible concepts”, seeking answers and meaning to our being. Like she explains in Icelandic, “rýmið er gjörólíkt, eftir því hverju þú trúir.” This piece creates its meaning through its audience, we see and experience what we personally believe and look for, whether it is a skepticism or a blind acceptance of truth. “This creates two worlds, intertwining within the same space while simultaneously challenging each other’s existence. As Ingibjörg reflects on her own past, present and future, she invites the audience to do the same.” 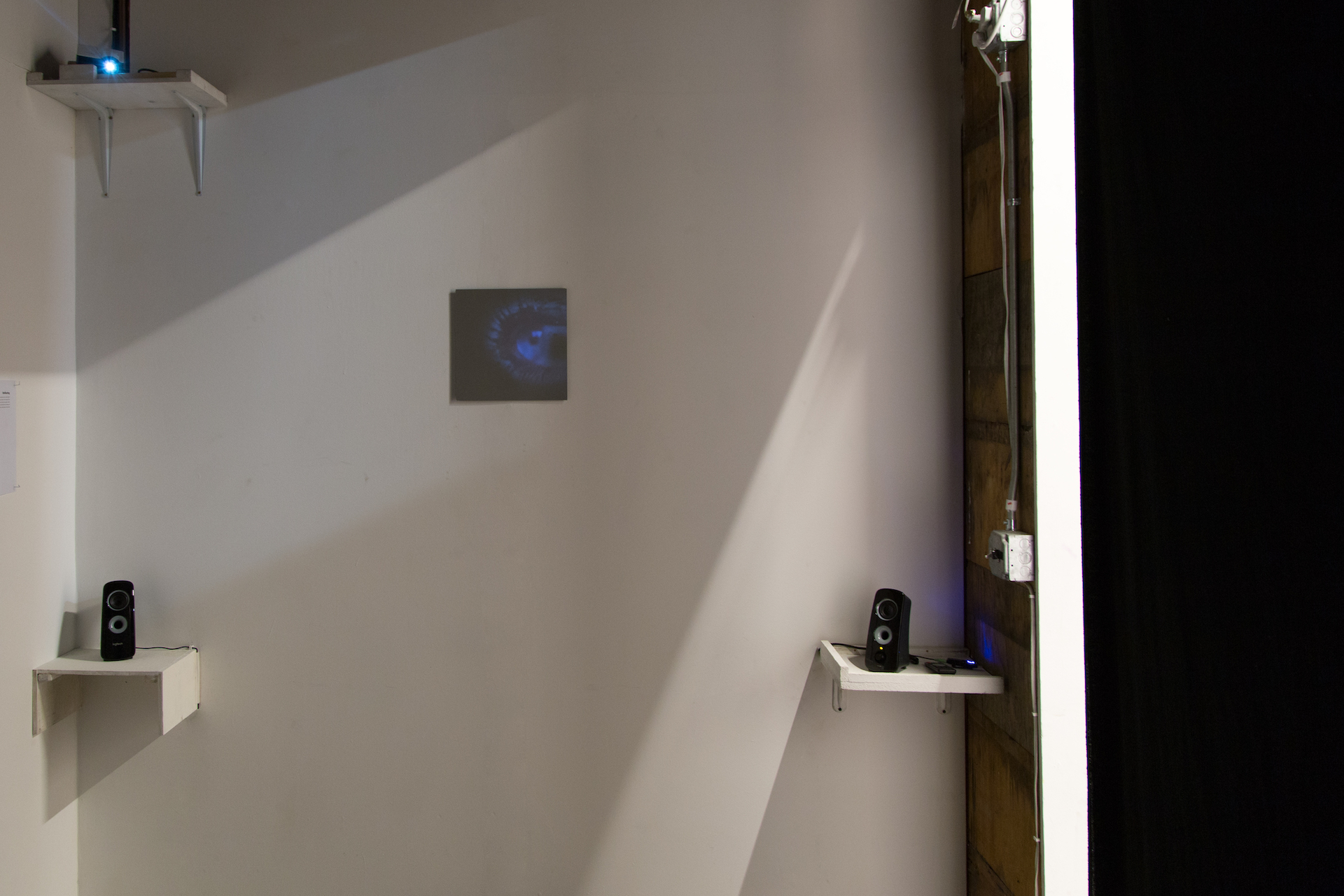 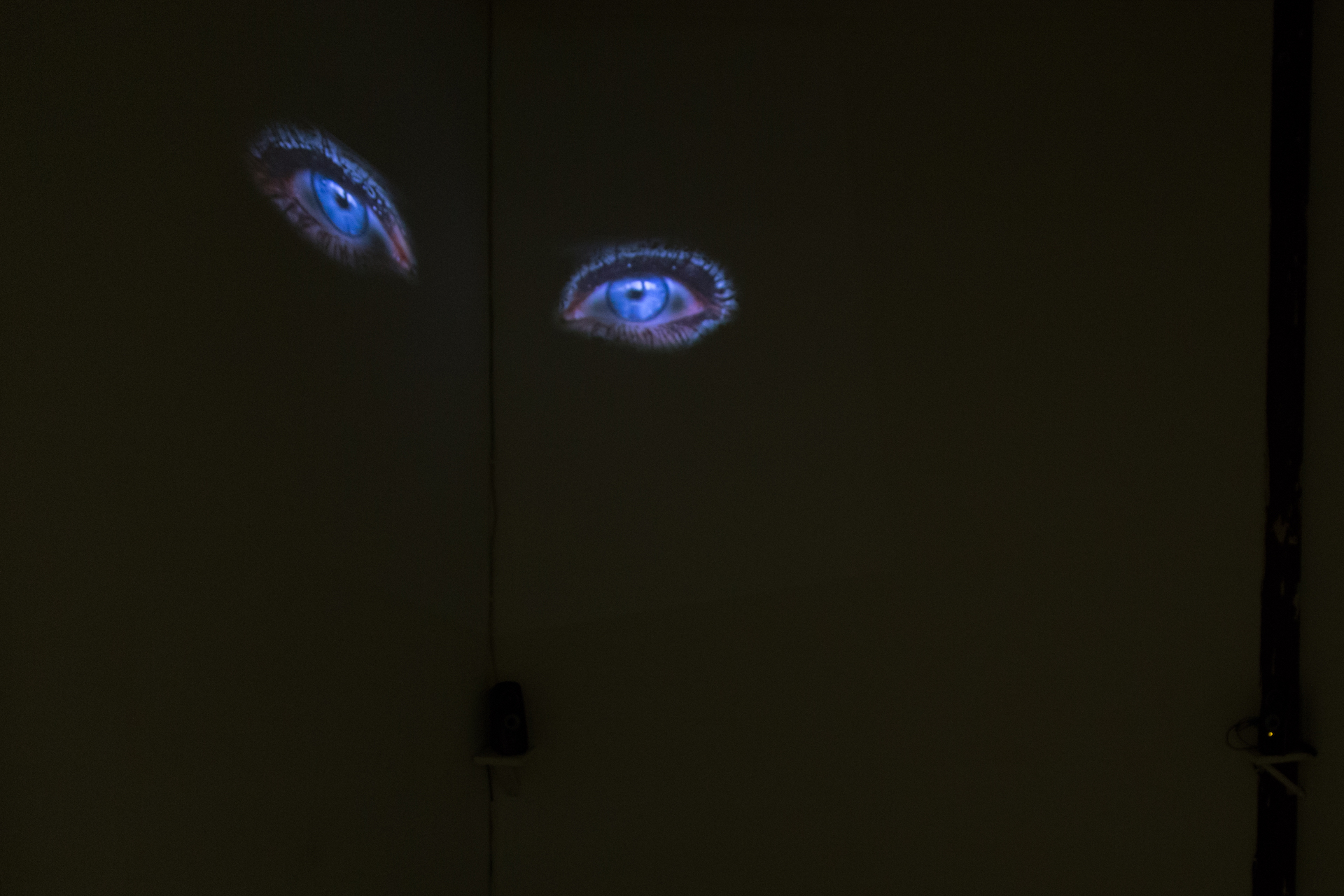 Sound echoes out from the black box and through the entire exhibition space, referencing the constant permeating of these messages out and into our everyday lives and existence. In her sound installations Ingibjörg frequently works with multi-speaker sound systems to create this surrounding effect. She tells me, “I put equal emphasize on sound and visual aspect. I believe that the visual will affect the aural experience, so it is important that those two aspects complement each other. None of my installations have been site specific, but it’s important that with each installation that the space also compliment both audible and visual part.”

In terms of current projects on the horizon, Ingibjörg is planning an installation with a traditional string quartet and live improvisation. She is also collaborating with two Chinese artists in the Bay Area of a dance film based on a previously enacted performance piece, dealing with similar thematics as Traslación. “It’s about being foreign in a new culture, the things you bring with you and the distance to you home. The dancer is dressed in water sleeves, a traditional Chinese costume, that has traditionally strict dance movements but bringing it to a new culture she is reinventing herself and the movements possible with that custom. It all began with long conversations at the dinner table, where we would also share our culture through food. Soon those conversations transformed into pieces of art, where we were building a bridge of understanding of each other and deepen understanding of cultural differences. Sophia plays a traditional Chinese instrument called Pipa but plays it a very untraditional way. In this specific piece, I am creating the soundscape, partly with using my own voice singing and reciting an Icelandic poem by Anna Marsíbil Clausen that was specifically composed for the performance piece. My favorite line in the poem is about how the sea should be gray, with tall waves. It is one of those things you don’t really think about when you grow up in a certain place, but when you are far away you start missing those things, like a certain color of the ocean that you don’t see in the new place.”