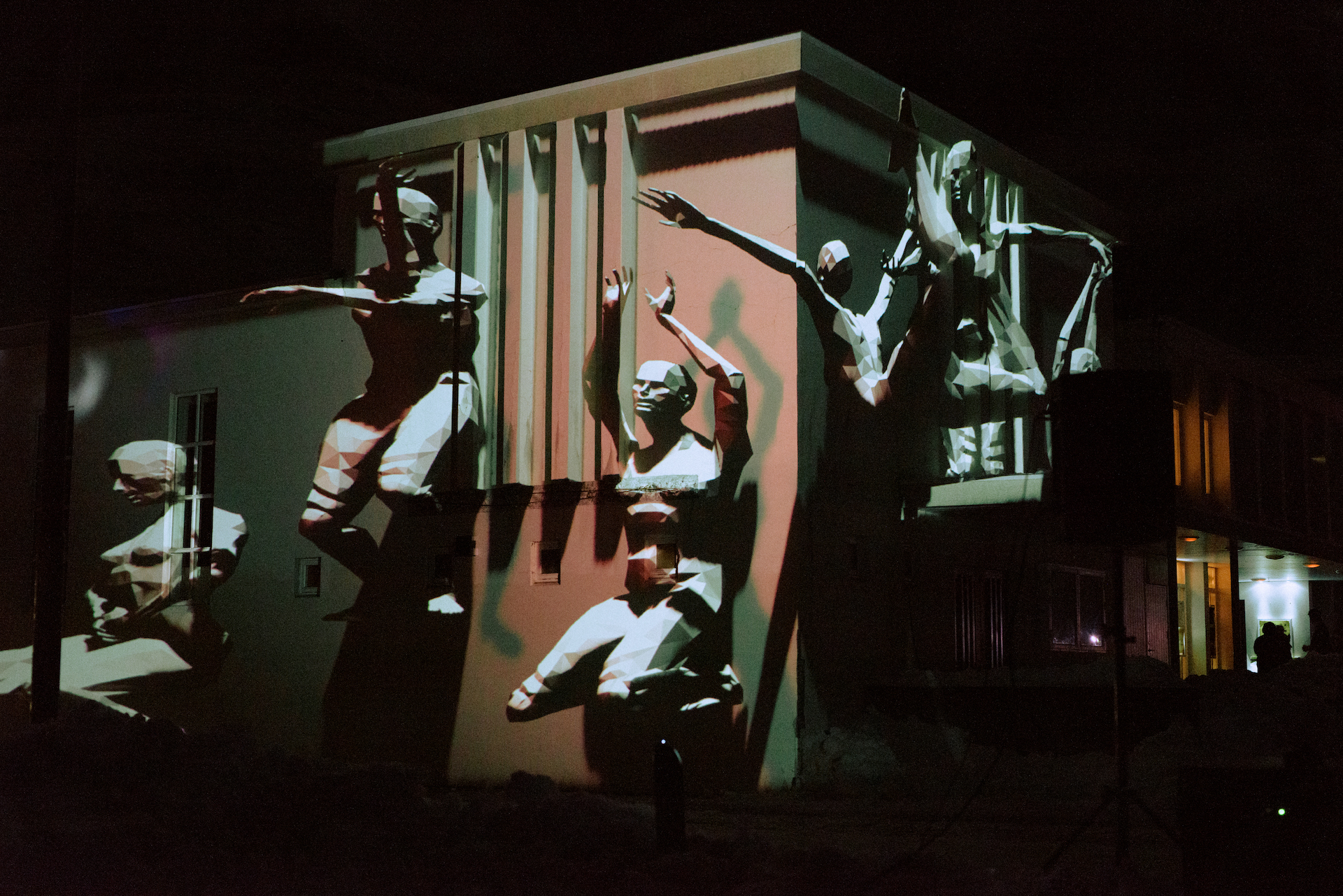 I cross a mountain pass and follow the road down through a white valley, pass a frozen waterfall, through continuous turns. Then suddenly a sign appears out of the darkness. As I move closer to the sign standing in the snowy hills beside the road it appears not to be any regular road sign, but a three-meter-high wooden structure holding a doodle-like image of a windy road through hills, a portrait of the road I am currently driving made in reflective tape. The sign glows when hit by the headlights and then disappears in the darkness the second the car passes it, so that one could wonder if it was an illusion. I continue, passing by three more of these reflective installations colored in blue, yellow, red and each of the them appears out of the darkness, vanishing quickly as soon as I pass them. I am approaching Seyðisfjörður – a small town in one of the East fjords which, because of the surrounding mountains, has not seen the sun for four months.

Driving into this rural town the scenery is at first completely dark. For two days the street lights are switched off between 6pm and 10pm in the night. The fourth edition of the annual light festival List í Ljósi has taken over Seyðisfjörður for a weekend to celebrate the return of the sun in mid-February.

List í Ljósi has been founded and carried out by Celia Harrison, originally from New Zealand, and Sesselja Hlín Jónasardóttir, a local to Seyðisfjörður. The festival was awarded the prestigious cultural prize Eyrarrósin 2019 just few days before the opening, increasing the expectations for this edition of the festival even more.

This year the festival has invited 32 commissioned national and international artists to take part in List í ljósi, but it also involved the whole city of Seyðisfjörður: the primary school children perform a dance show dressed in LED-light costumes, exhibit installations created through workshops during school hours and dress the old wooden school building’s windows in the colors of the rainbow. The local art school, LungA, participates with works made by current students in the community center Herðubreið, and even private homes around the town have been turned into large scale canvases hosting projections and sound works. 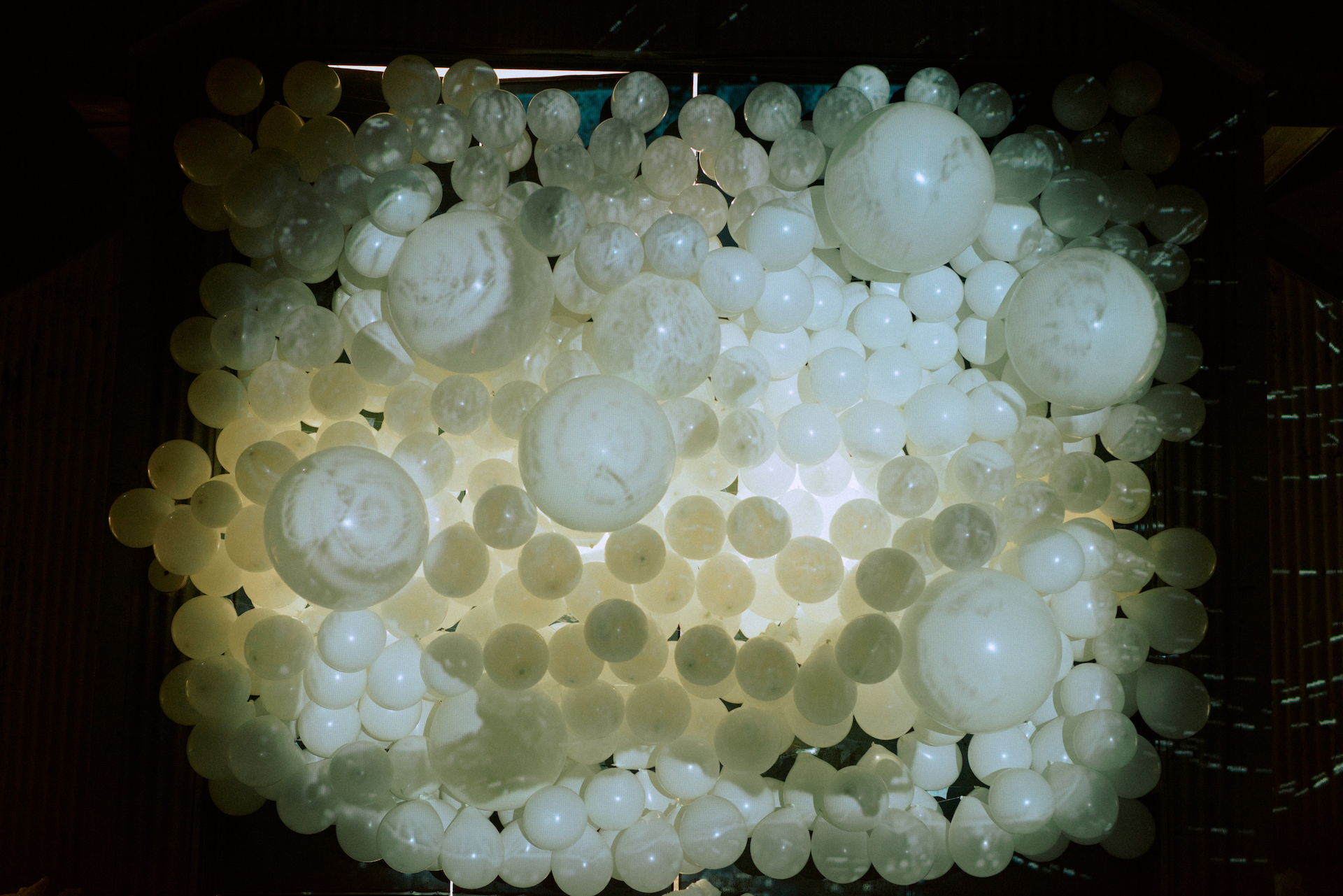 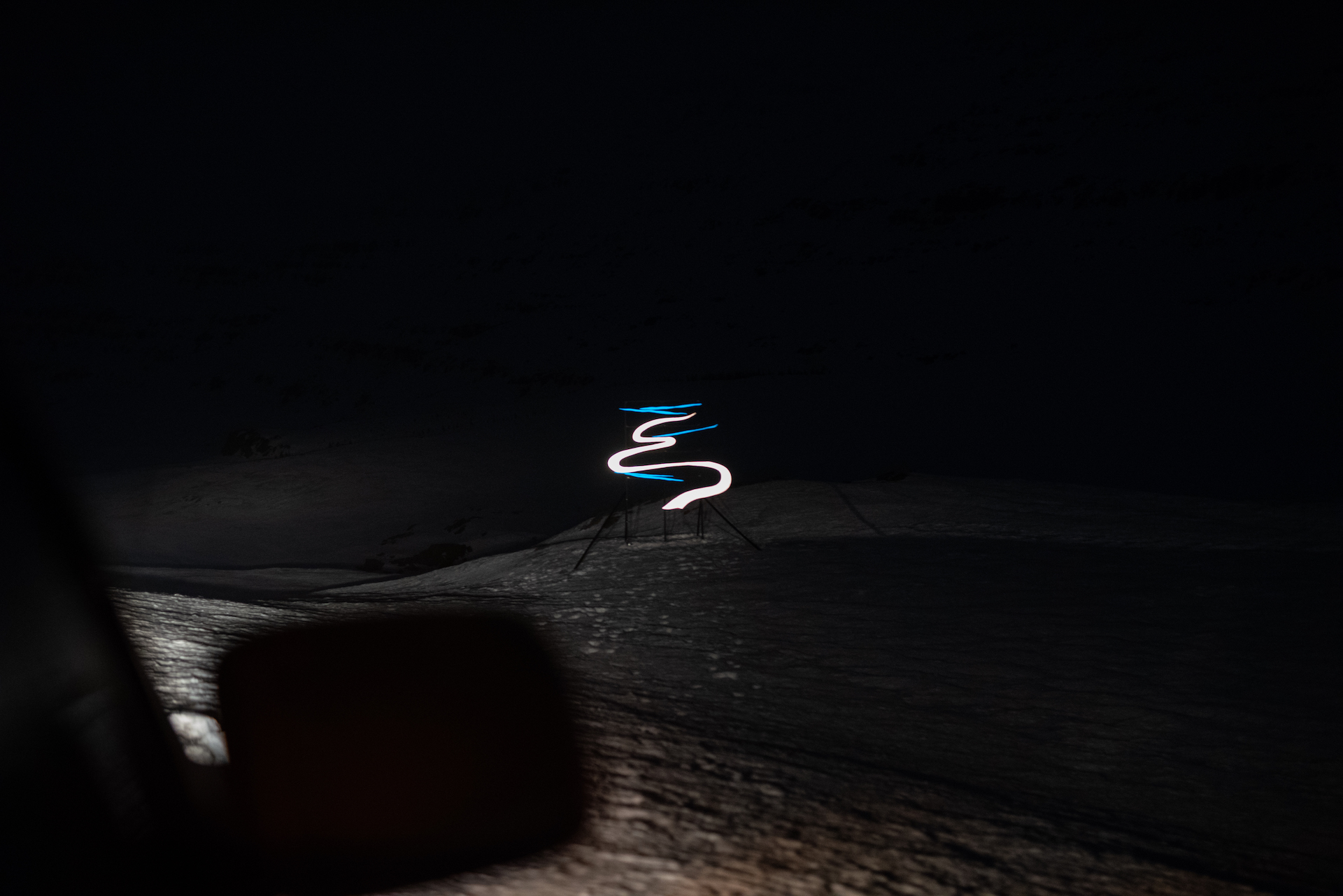 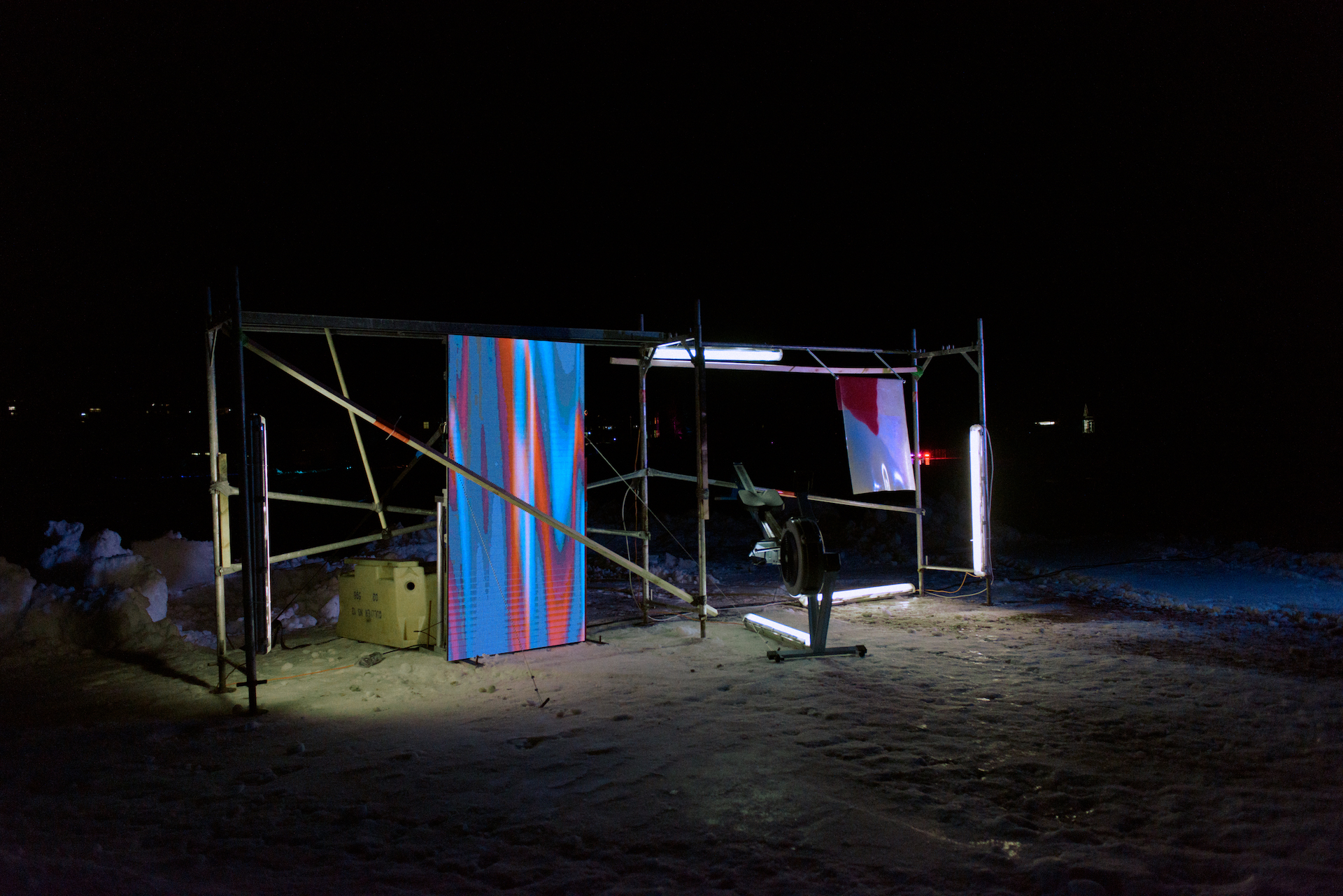 As a festival participant, I follow a path carved out in the snow. It takes me in a big circle around the lagoon located at the center of the town. The works are scattered around the route and walking slowly around feels like the right pace to experience the festival.

The outside works differ between sound works, installations, projections and performances. I pass by some works quite quickly, whereas others demand me to stop and gaze for a while. The way outdoor works, performances and indoor visual works presented in Herðubreið talk to each others reveals a thoughtful curation which aims at offering the viewer a wide range of experiences.

The first piece I stop by is projected onto two corner walls on the outside of the community center Herðubreið. Made by Slovakian New Media artists, Boris Vitazek & Zuzanna Sabova, this meditative 3-D projection mapping is accompanied by hynotizing ambient music. The accuracy of the realisation and the precision of the details of this audio-visual piece are impressive. Large crowds gather around the projection throughout both nights, enjoying the almost hallucinative expression of bodies moving, falling and dancing on the walls. Presenting such a strong and technically complex work marks the curators’ ambitions, and this work serve as one of the center pieces of this year‘s festival.

Working in the cross field between sculpture, video and digital painting, Danish artist, Lotte Rose Kjær-Skau, presents an installation consisting of three main elements: a rowing machine, a vertical LED-screen, a colored silicone banner. These three objects are framed by a large scaffolding and poles of burnt wood attached with elastic training bands, merging together natural elements such as wood, and artificial materials and objects such as steel and a large-scale digital screen. Simultaneously, the flapping silicone banner moves in the wind creating a synergy between the changing images on the LED-screen and the tilted rowing machine. An energetic installation which stands out in the program because of both its materials and its style.

When moving inside Herðubreið to experience the indoor works, an installation created by the Swedish Heliosynchesiy Research Center catches my attention. The piece enacts a treatment center for people suffering from the lack of direct sun. The research center is formed by an unnamed Swedish artist, who in collaboration with psychologists has created the fictional neurocognitive syndrome called Heliosynchesiy (Helio = Sun, Synchesiy = Confusion). In this science fiction inspired research project the Heliosynchesiy Research Center works with round objects and formations imitating the sun as a way of helping people, specifically the Nordic regions, to go through months of no or very limited sun in the winter season. The audience is invited to let themselves be treated by a soothing film of continuously moving round objects. 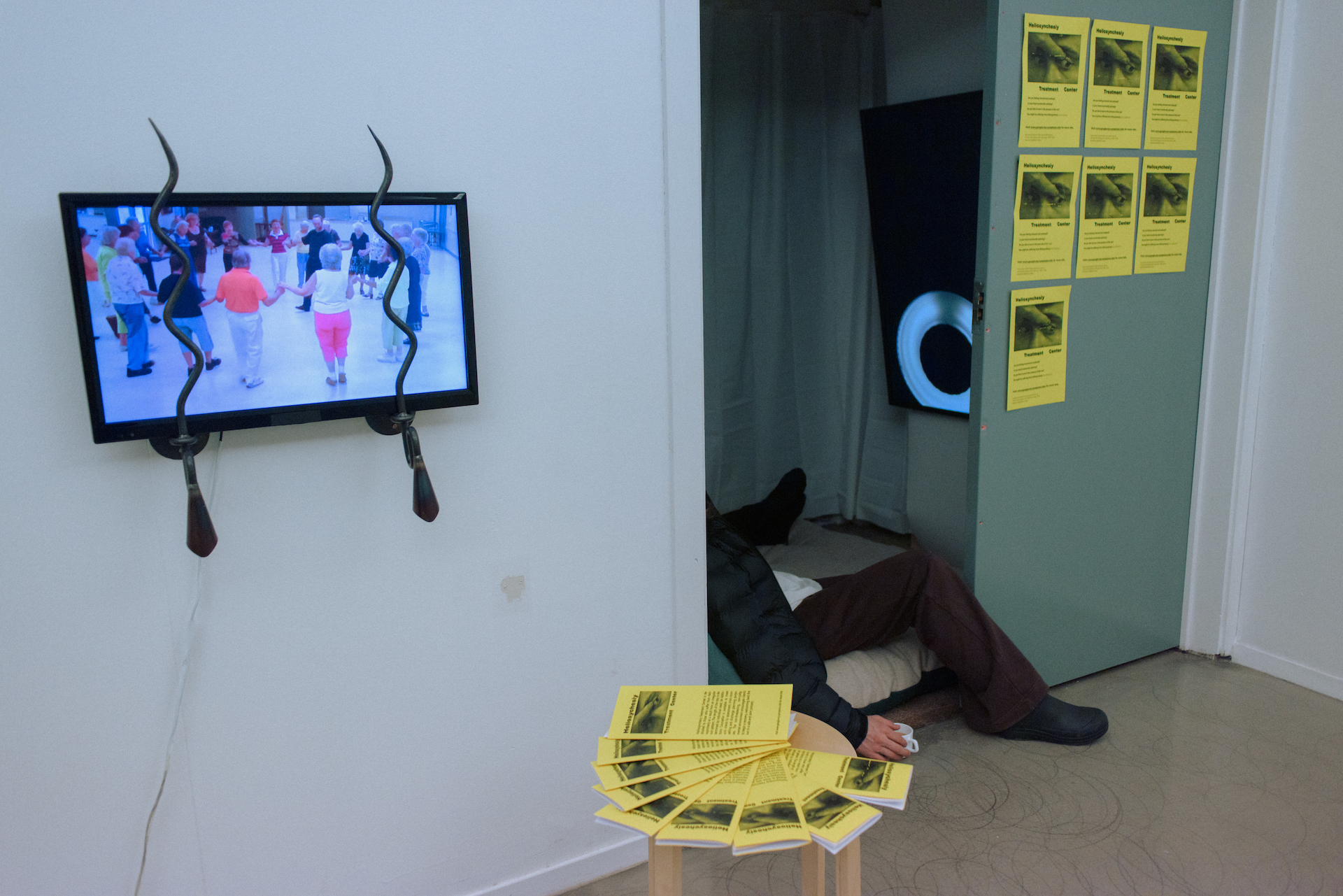 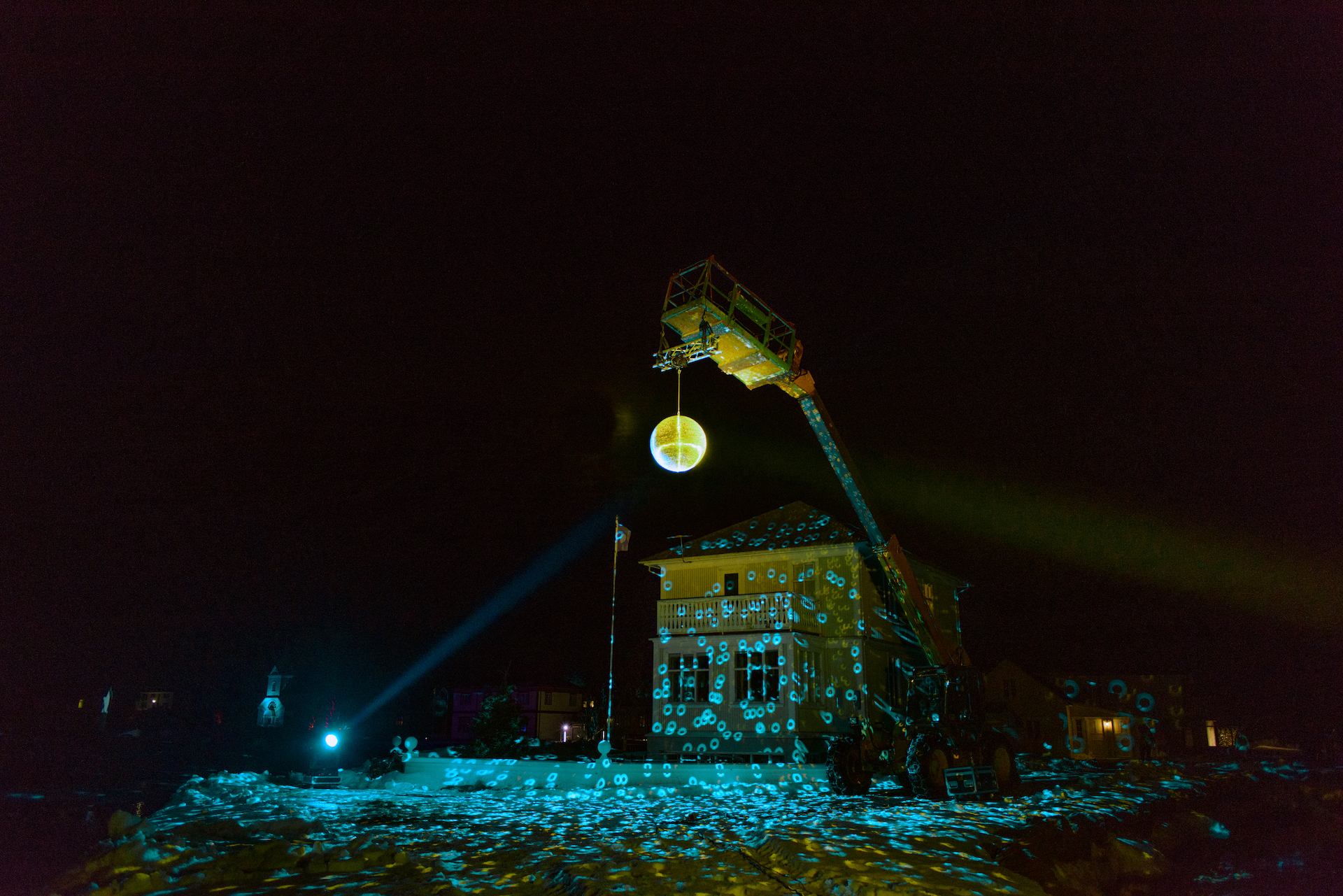 During the afternoon on the second day of the festival, Australian artist Emily Parsons-Lord invites the audience to gather outside for a performance. Parsons-Lord works with installations and performances informed by research within natural sciences and through this performance she aims at recreating the unique colors and shades of the sun which would be visible if the sun didn’t appear as bright as it does to the human eye. After a brief talk about the visible rainbow-colored light emitted by the sun, Parsons-Lord lights ten columns consisting of potassium powder and color pigments and slowly moves the board around while the smoke ranges from dark purple to bright blue, red, orange and yellow. The performance itself appears as a simple gesture, though the physical reaction creating a vivid color palette has a poetic effect in the vague light of this afternoon.

At 6pm the streetlights are once again turned off for the festival. Standing trees are lit in different colors and a purple waterfall falls from one of the bridges along the route. The curators of the festival have inserted additional works into the program creating a flow around the path. One of the largest pieces of this year’s festival is a giant disco ball hanging from a crane also made by the List í Ljósi team. A simple set-up which transforms the surrounding area into one big dancefloor while at the same time it shoots a projection of the disco ball onto one of the mountain sides creating a reminiscence of a solar eclipse. Sadly, the massiveness of the piece and its light seem to disturb a couple of the nearby art pieces, making it difficult to experience them on their own terms. However, the disco ball is a crowd-pleasing factor and it serves as a welcomed addition to the festival taking a broad crowd into account.

I am continuously surprised by this festival: the idea of bringing a lot of people from around the world to Seyðisfjörður during this time of year, taking the weather and the darkness into account, seems at first a mad idea. However, artists, volunteers, crew members, visitors and even a growing international audience, happily return to the fjord every year in February for this specific occasion.

To sum up this year’s List í Ljósi, I am impressed to see how the festival expands by every year. Compared its last edition, the festival has grown in both the amount of art works, participants and side projects happening as a part of the festival. This year, for instance, it engaged the local primary school children and added a new Nordic Program which offers five shortlisted Nordic artists a two-months funded residency leading up to the festival.

Though, presenting exclusively light art seems a not easy frame to fill for an entire festival. How does one avoid forcing both objects and art works in the attempt to make them fit into a seemingly limited theme? Most of this year’s artworks deal with light in one way or another: the idea of light, the long for or the absence of light, while others, such as the previously mentioned piece by Lotte Rose Kjær-Skau, do not actively engage with light as a theme, but they do utilize light as a medium.

I am relieved to experience a rather open curatorial approach and the same seemingly openness towards the individual artist’s own interpretation of the theme. Light might be a suitable frame for this festival as it celebrates the return of the sun, but List í Ljósi is also an art festival which accepts the challenge of this frame and once again presents a well-curated and exciting program of artists and works from all around the world.