Contemporary Icelandic Prints in Other Hats 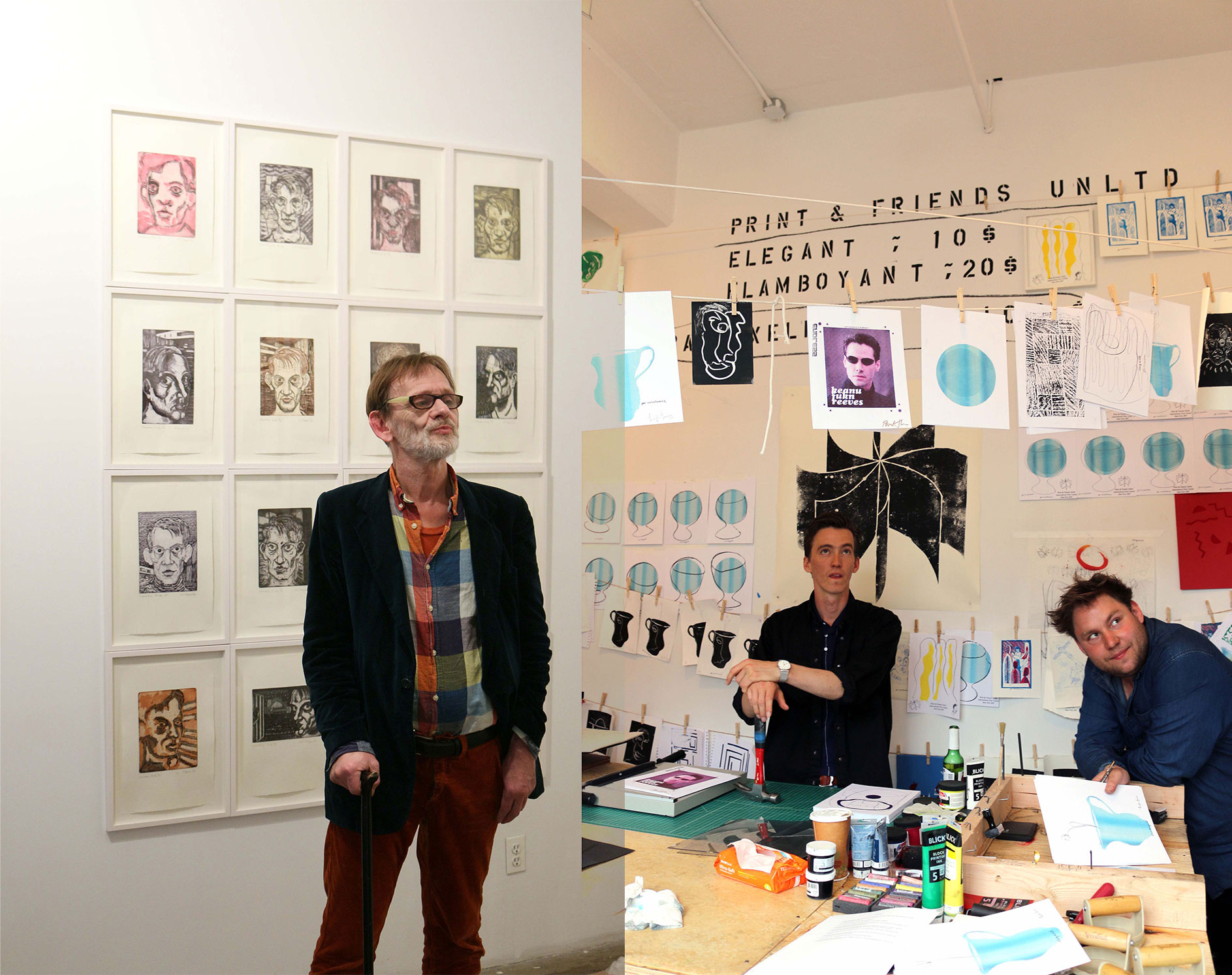 Contemporary Icelandic Prints in Other Hats

Currently on view at the International Print Center in New York is Other Hats: Icelandic Printmaking, an exhibition of works curated by Ingibjörg Jóhannsdóttir and Pari Stave and organized around the concept of printmaking. It includes prints created through mechanical, bodily, and digital means. Together, they give a glimpse into the rich culture of storytelling in Iceland and reveal the myriad of ways in which the Icelandic landscape has been interpreted by contemporary artists. While the show is not centered around a specific theme, it gives a general understanding of the variety of work being produced by Icelandic artists and artists working with Iceland in mind.

The visual content of the exhibition ranges from paper works that focuses on the abstract and geometric, to works that evoke the scientific and corporeal in 3 dimensions, and even includes a participant-friendly printmaking workshop, Prints and friends (Prent & vinir) by the duo Leifur Ýmir Eyjólfsson and Sigurður Atli Sigurðsson.

Interpretations of the Icelandic landscape seem endless—moss covered mountains and jagged cliffs done in drypoint by the Danish artist Per Kirkeby hang opposite a monoprint of an evergreen tree by Sara Riel, titled Everyevergreen (Barabarrtré). A print by Rúrí from her Future Cartography series comments on the looming effects of climate change on Iceland’s coastline, made digitally with the help of scientific datasets. Line etchings by Georg Guðni beautifully capture mountainous landscapes with simplicity and elegance, while geometric etchings by Sigurður Guðmundsson, from the Sun Stands Still series, reference outdoor spaces but are left purposefully ambiguous for interpretation. 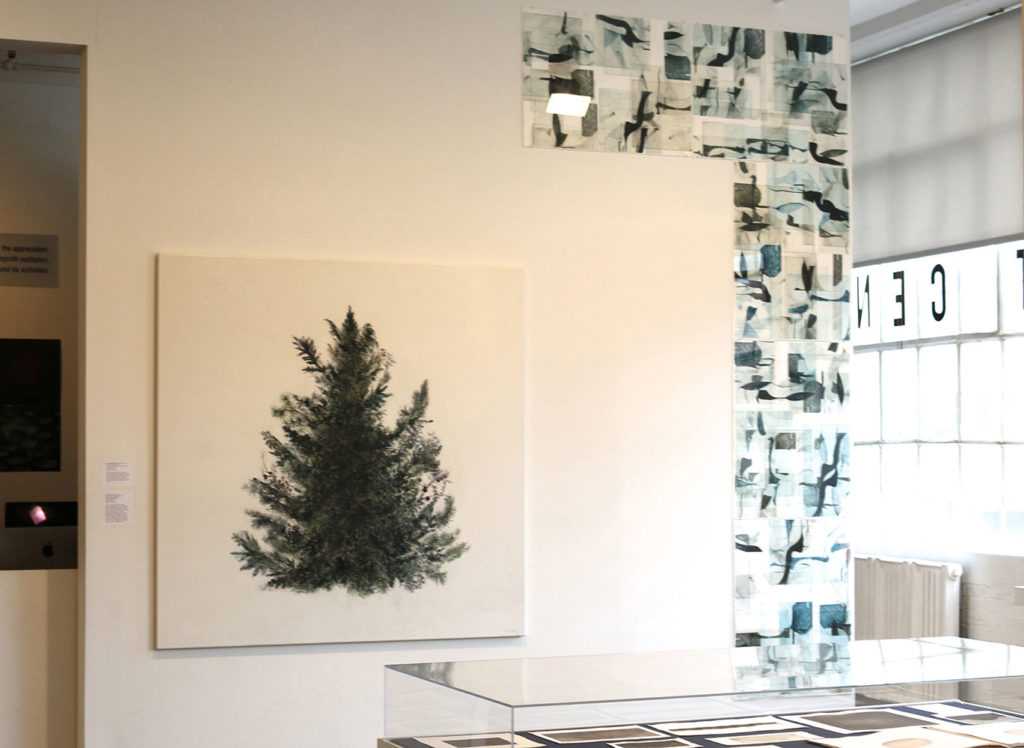 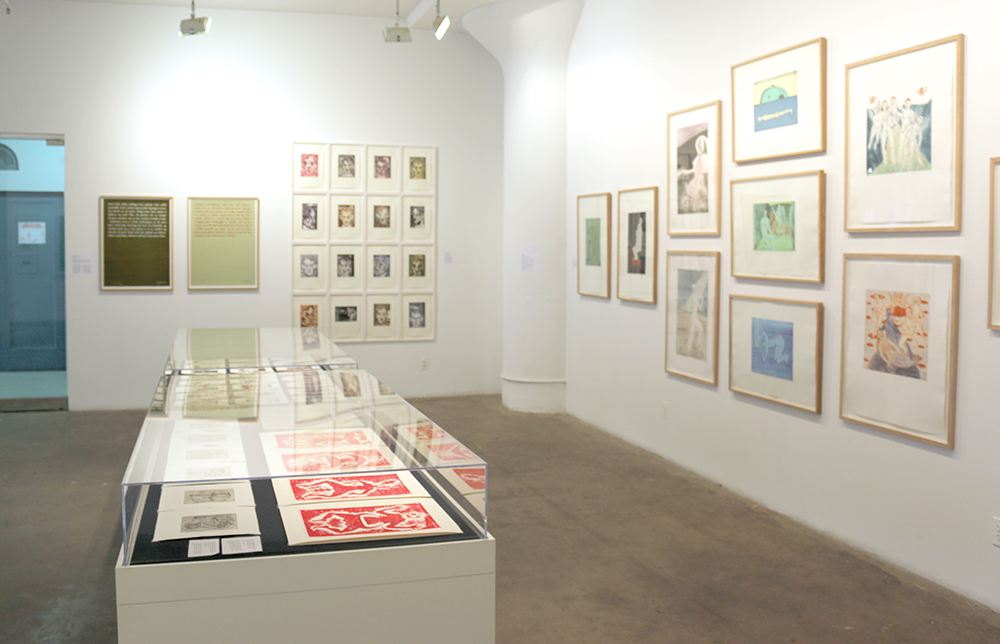 Central to the exhibition are prints by Helgi Þorgils Friðjonsson from the late 1980s and early ‘90s, which depict personal and mythological stories through illustrations, primarily referencing the human, animal, and spiritual realms. Regarded as Iceland’s “most prolific printmaker,” Helgi’s work gives a glimpse into the rich storytelling culture in Icelandic history, but imparts the viewer with his own subjectivity that is simultaneously humorous and sensual. The works that stood out are Gullfoss (1987), Red Clouds (Rauð ský, 1991), and I.N.R.I (1986), due to their bright coloring and uncanny narratives including human angels, a seal, and a surreal creature that brings to mind hallucinatory drawings done by Salvador Dalí. 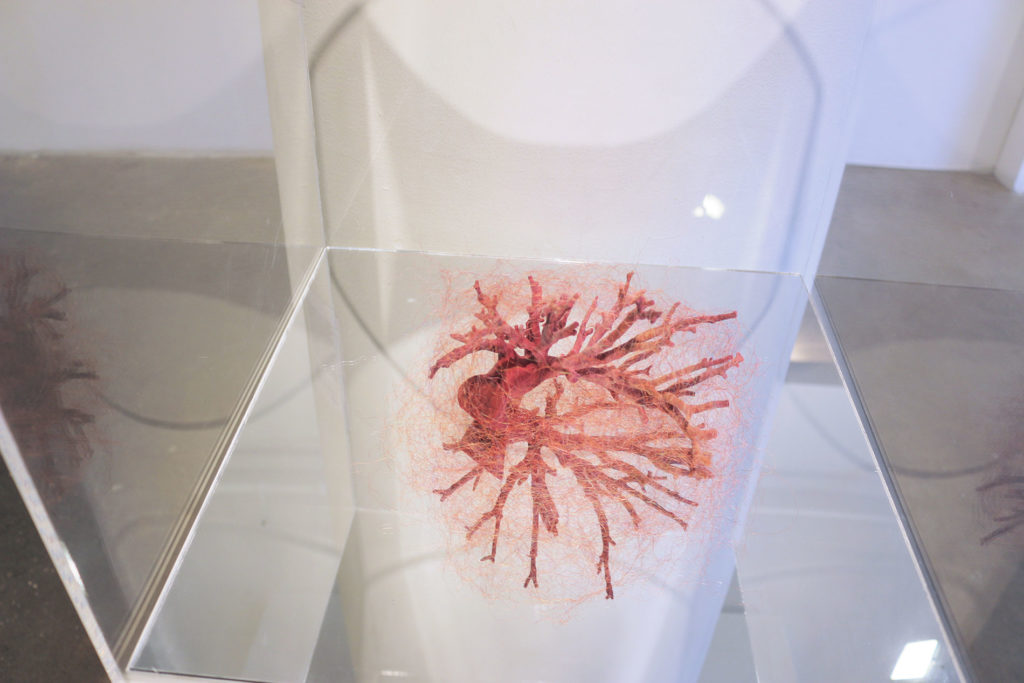 The exhibition would seem incomplete without a synthetic fiber work by Hrafnhildur Arnardóttir (aka Shoplifter), who is an active member in New York City’s art community. On display is a 3D print of hers entitled Raw Nerves II, made of pink, green, orange, and purple synthetic hairs haphazardly wrapped around a solid center that resembles a neuron, or an underwater coral. At once fascinating yet repulsive, Shoplifter’s use of fake hair adds layers to the meaning of Raw Nerves II, which could even depict a heart, although indisputable is its connection to the intricate human nervous system. 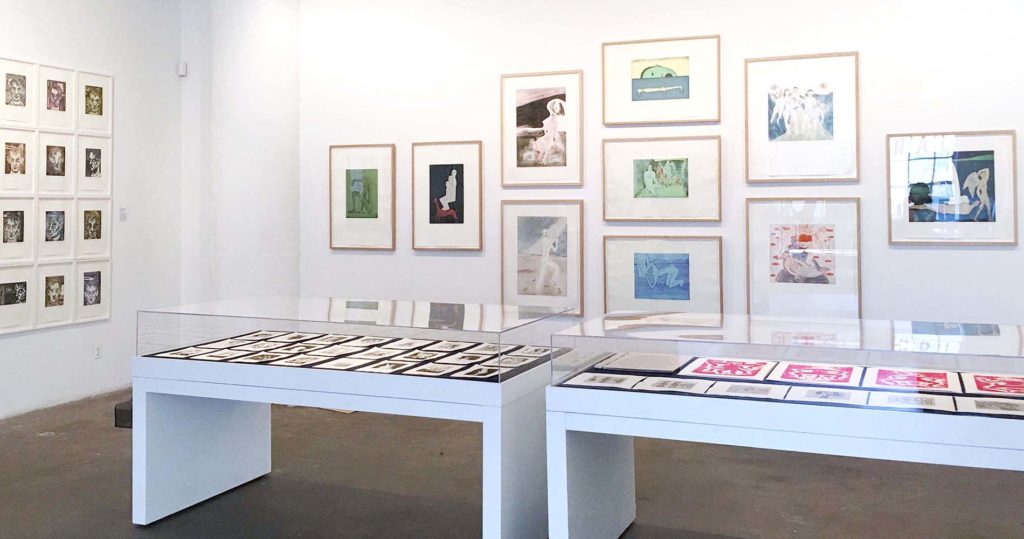 A bright green monotype by Hrafnkell Sigurðsson contrasts with the minimalist photography he is known for, but joins his oeuvre nicely through its repetition of organic shapes. At first glance it, the print resembles a seascape replete with electric green jellyfish, but upon closer inspection, the shapes are distinctly made of hand prints. The skin folds and wrinkles of Hrafnkell’s fisted hands can be made out in some areas, but these details only heighten one’s fascination with his body-focused creative process. 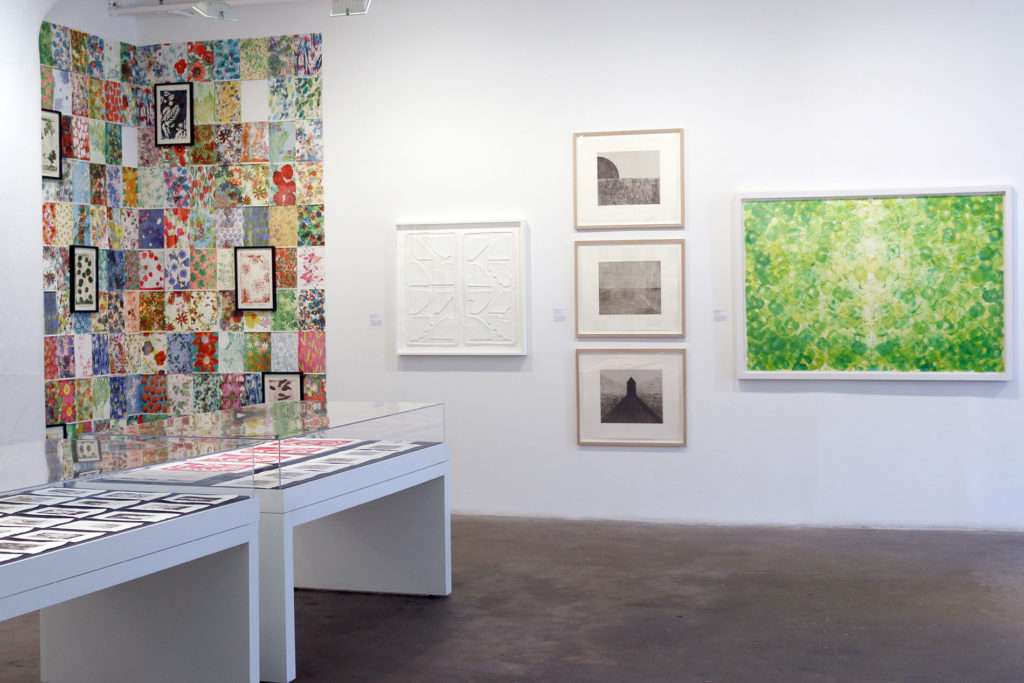 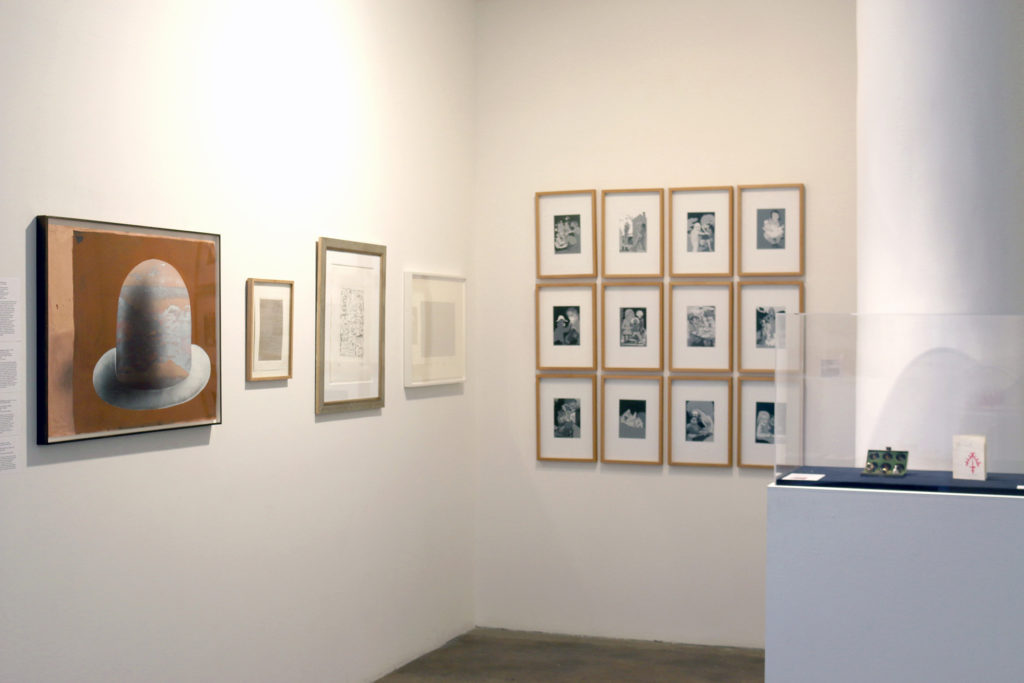 Finally, only in retrospect can the hidden connections between nature and the human body be understood as being foreshadowed by the Dieter Roth print (Hat, 1965) featured on the cover of the exhibition catalogue—inside Roth’s hat are colorful valleys and ridges that attempt to blend into the texture of the man made accessory, but which, to the discerning eye, actually depict intricate details of the Icelandic landscape. Other Hats: Icelandic Printmaking is on view through June 10th 2017.