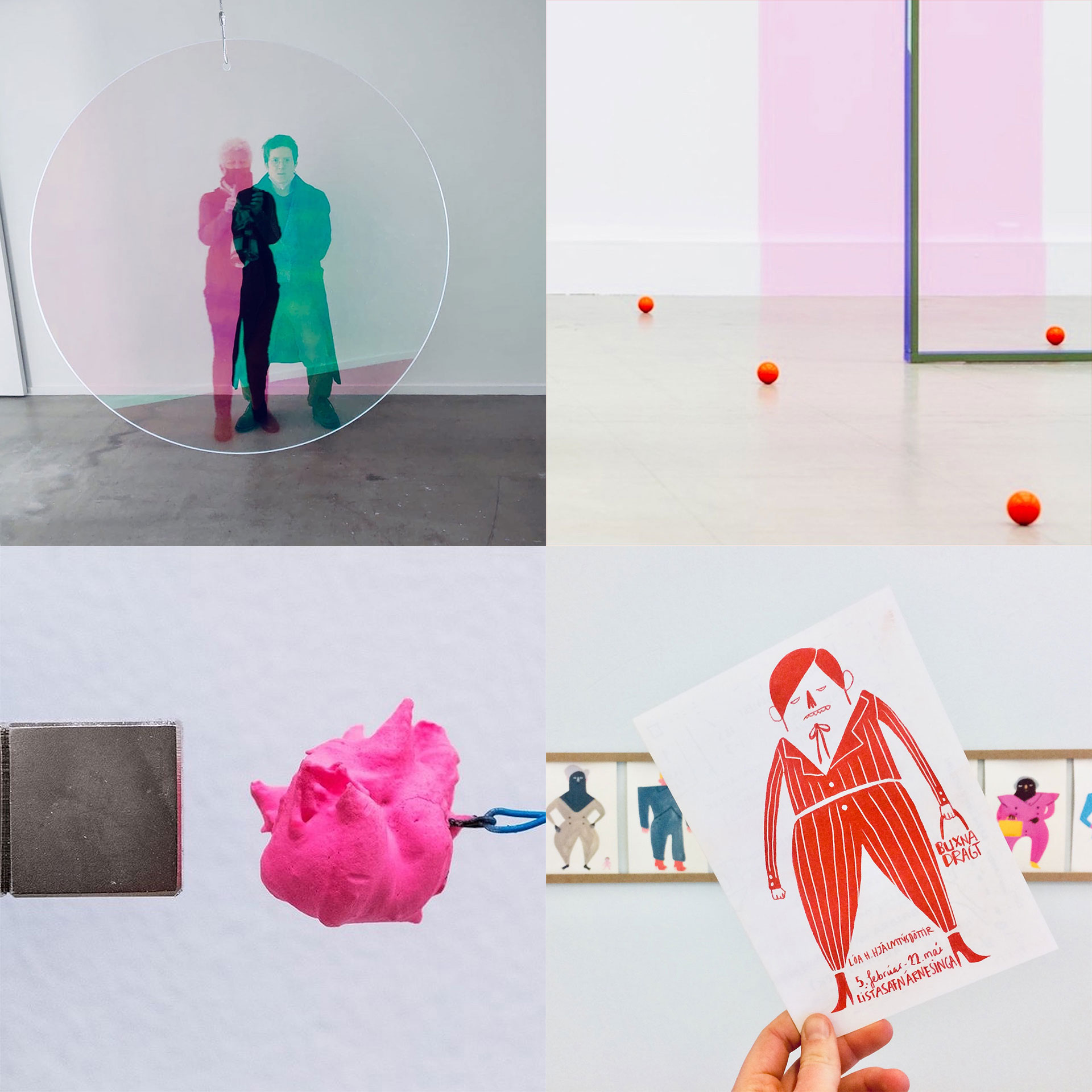 An Invitation to Think Through Many Doorways: Interview with curator, Erin Honeycutt

Artzine: What is the common thread running through these solo exhibitions?

You can see with Ingunn Fjóla that the whole installation is a way of playing with the frame. It’s moveable and you set it into motion. There are also certain colors on the wall that are also framed while not necessarily being a traditional frame. It’s a very delicate look at the way we move through space, also.

With þórdís Erla, the surface perception is about this material, this dichroic film that lets light in and deflects it. With her lightboxes, she takes the elements of what you know to be digital surfaces and she creates an imitation of a digital surface but it’s all analog which is fascinating. Also, there is a certain… routine, it’s about a routine that brings you into the nature of time as a framework and a surface image.

With Magnús, it’s a constellation of materials. There’s a poem of objects in the room that don’t necessarily belong together but they all have an inner motor of movement that, once they are put together spark something. I always refer to him as a tinkerer- someone that doesn’t necessarily rest easily into the box of Fine Art, but instead rejects that box and looks for something else, or rebels against the idea of those rules and in that sense describes it very well in the rebellion against it.

With Lóa´s work, there are so many ways to approach it and one that is particularly interesting to me is to relate to her paintings installed in the exhibition as one-panel comics, as akin to meme culture on the internet. There is a lore to them that is extremely public and private at the same time; an inside joke as well as the most publicly relatable incidents imaginable.

Artzine: What do the poems included in the exhibition publication bring to these threads?

Erin: Although not part of the exhibitions, but very important for me in thinking of them as a whole, is found in the publication printed on the occasion of the exhibition in which I chose poems both in English and Icelandic. I chose to do this because, for me as a person who writes about art, the perception of the image of the artwork is difficult to have a sense of without words so my writing about the artwork helps me to understand what I think and feel about the artwork. It’s almost like I am dyslexic to the image without writing. I found it to be a reflection of a way in which the works in the exhibition are about moving beyond ocular-centric perception, the perception that is just about the eyes and getting a sense of the artworks with an inner image as well.

Artzine: What can poetry bring to more traditional art writing?

Erin: The poetry interspersed throughout the catalog is next to more critical essays that are more strictly this category of ‘art writing’ as we know it. The poems provide a type of language for the reader that is more reflexive of an artwork rather than trying to describe or analyze an artwork. They’re more about a kind of language that is less about the critical mind and more about the sensing mind, about a language that has many doorways, inviting you to think through many doorways – it is not linear.

Artzine: All of that being said, the exhibitions are still very light and fun, even playful – how does that tie in to the sense of surface perception that is being explored?

Erin: Yes, another thread that connects all of the exhibitions is playfulness and a sense of playfulness of surface perception and playing with the rules of surface perception. It’s very playful. I like the idea of difficulties and problems being welcome when you are playing. There’s no game without problems. You can’t play without them. So although the artworks don’t address problems in society directly, they highlight the necessity and inevitability of change in any environment, for sure.