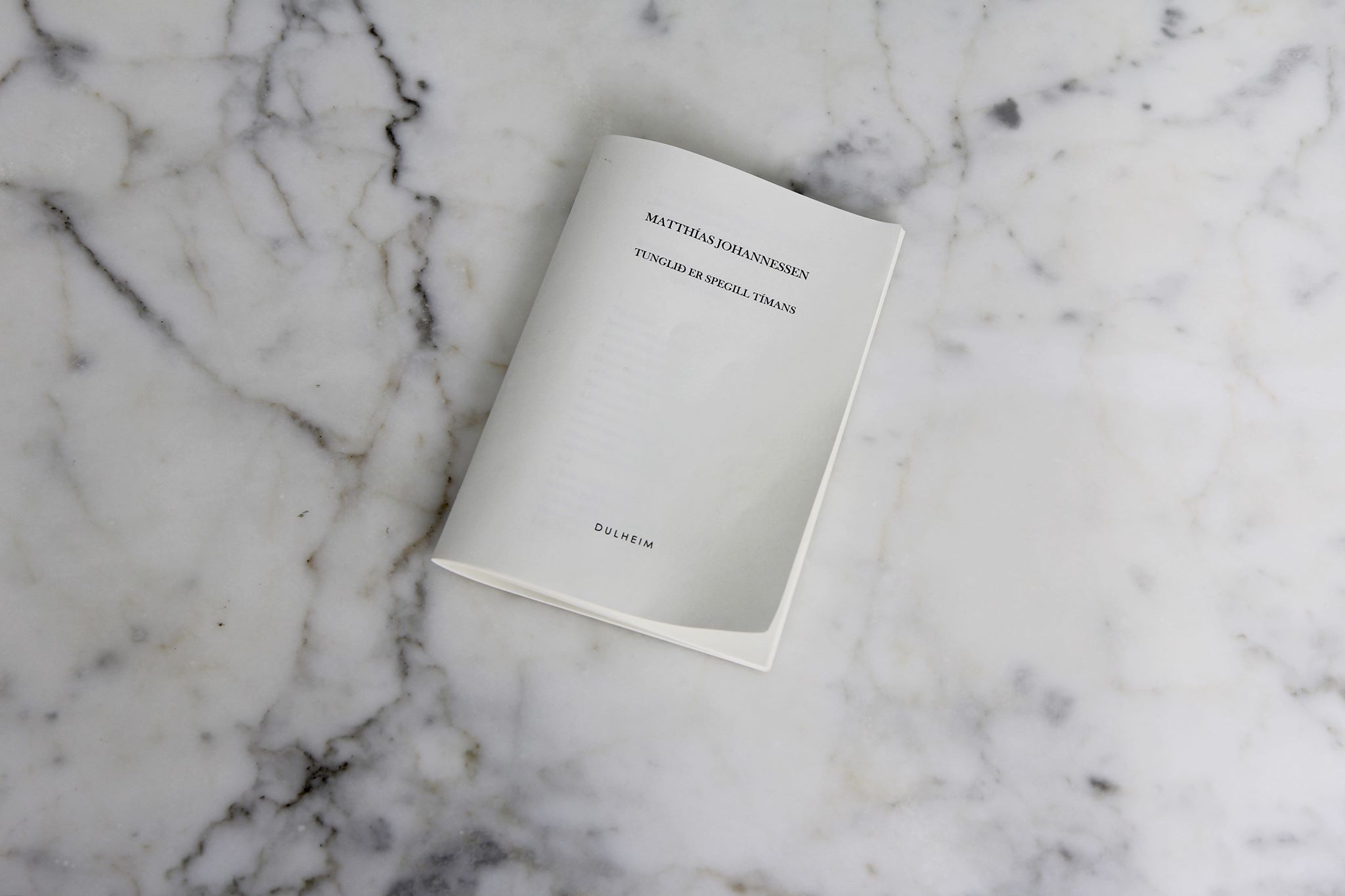 About connections and slowness

A look into the show Tunglið er spegill tímans and the artist book publishing ‘uns.

The show Tunglið er spegill tímans encloses the poetic and meticulous artistic research of Arild Tveito which proceeds with brilliant intuitions and smart connections, creating a constellation of ideas. At a first look the space of Harbinger seems quite empty, except for a table with three chairs, a book on display in a cabinet, and a few texts hung on the wall. The show is very minimal, but once we start reading the texts we get to know the unique universe created by Tveito: the conceptualism behind the exhibition unveils its nature and starts to fill up the space with an invisible network. On show there are clues of the connections through which the artist had sailed during his research, there is some kind of magical fascination in discovering how things are secretly linked and how many possibilities of being and of meaning are inherent in one single object, depending on how you look at it.

The idea for the show was born with the Scottish curator Gavin Morrison, a friend of Tveito, who invited him to collaborate for a printed edition titled Sunnudagur, 29. September, 1912, an Icelandic translation from English of a journal entry by David Pinsent, who visited Iceland with Ludwig Wittgenstein. David Pinsent wrote down their experience in a very synthetic diary, which skips completely any description of the landscape, revealing the pragmatics of the trip.

During his stay in Iceland, Arild discovered the poem Tunglið er spegill tímans by Matthías Johannessen which has been translated in Norwegian by Knut Ødegård. Contrasting David Pinsent’s journal, the poem is made out of beautiful and poetic descriptions of images that revolve around the idea of death. The poem has been published in a small bilingual edition by Dulheim, and can be purchased at Harbinger.  Similar poetical visions can be found in the book on display in the show Draumkvæde, illustrated by the Norwegian artist Gerhard Munthe in 1904. Draumkvæde recalls the medieval dream visions tradition, where “the dreamer is characteristically in some state of sinfulness or melancholy; the dream is then a response to the visionary’s reality; and the vision allows him to undergo an imaginational or spiritual development so that his perspective is changed after the dream experience” as Arild Tveito explaines. 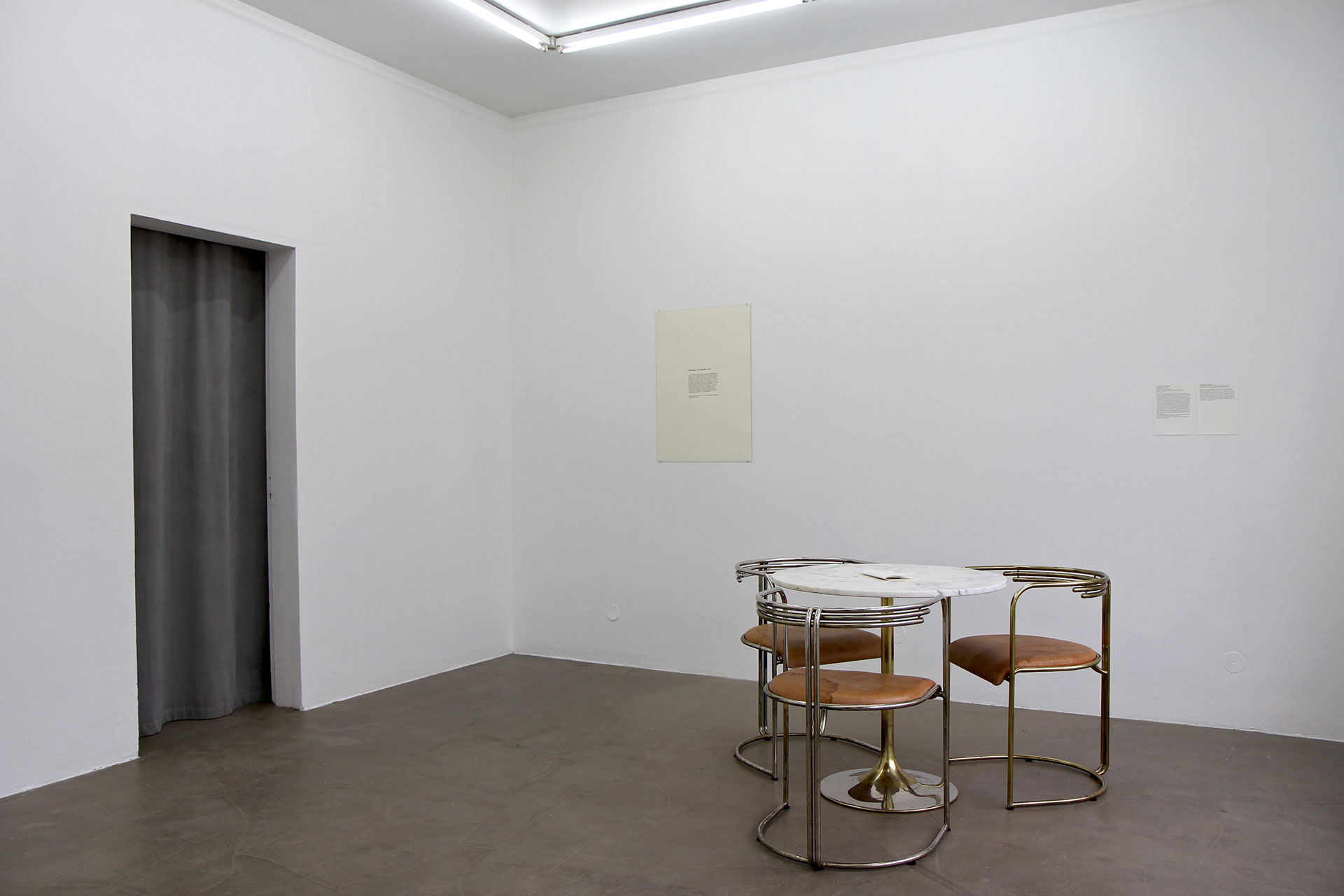 The installation Pataphysical Constellation consists of three chairs and the table borrowed from the National Gallery of Iceland and brought to Harbinger for the show. The furniture was designed by Matte Halme of Lepofinn, Finland, back in the 1987, and its Finnish origins took Arild Tveito back to his time as a student in Nordic Art School of Karleby in Finland, where he attended some lessons from the Swedish artist Mats B (1951-2009), guest professor from the Vestrogotiska Patafysiska Institutet, who introduced the students to the imaginary science: the ‘pataphysics. 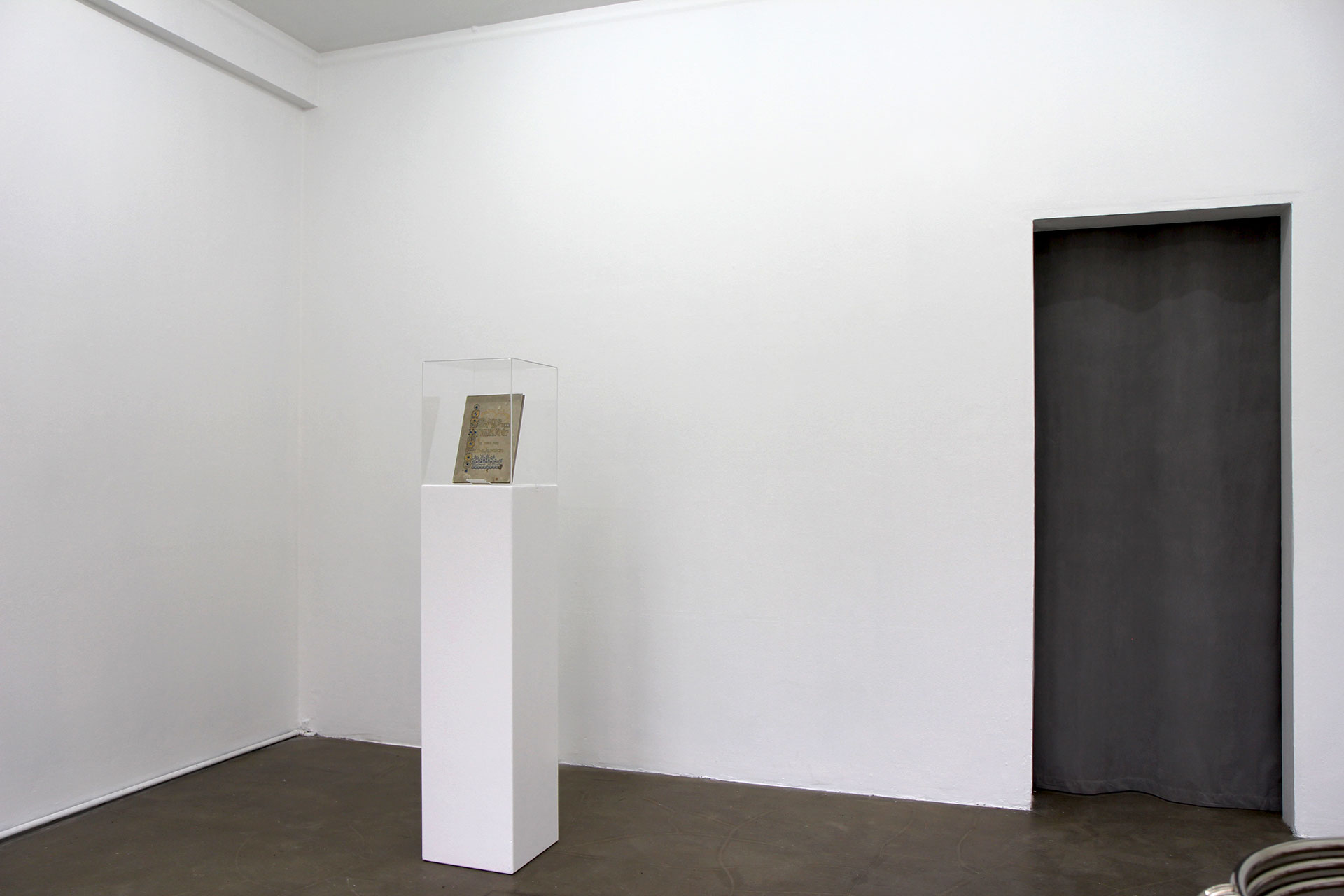 Tveito’s artistic research is very much influenced by the ‘pataphysicians: they follow a theory placed on the border between philosophy and science. The ‘pataphysics was born at the beginning of the last century from the brilliant mind of the French writer Alfred Jarry, and has collected many followers within the visual art field through the years. The ‘pataphysics “[…] is the science of that which is superinduced upon metaphysics, whether within or beyond the latter’s limitations, extending as far beyond metaphysics as the latter extends beyond physics.” and “’Pataphysics will be, above all, the science of the particular, despite the common opinion that the only science is that of the general. ‘Pataphysics will examine the laws governing exceptions, and will explain the universe supplementary to this one.” (Alfred Jarry 1996, p.21).  By doing that, ‘pataphysics opens a door to a new way of thinking about the world, a way ruled by creativity, which recalls the way a human brain works: jumping from one memory or thought to another, connecting them in unpredictable ways.

Footage of Ásta Fanney Sigurðardóttir reading from the poem Tunglið er spegill tímans by poet Matthías Johannessen. The reading was made on the last day of Arild Tveito exhibition 18. august (on Reykjavík culturnight).

Arild Tveito had also been influenced by Miguel Tamen’s book Friends of Interpretable Objects (2004), because “It re-anchors aesthetics in the object of attention even as it redefines the practice, processes, meaning, and uses of interpretation. Tamen’s concern is to show how inanimate objects take on life through their interpretation – notably, in our own culture, as they are collected and housed in museums. It is his claim that an object becomes interpretable only in the context of a ‘society of friends’.”

Tunglið er spegill tímans is part of the summer program Print in media, a space to be walked which has been organised by ‘uns, a project run by Guðrún Benónýsdóttir. ‘uns goes well beyond the organisation of shows and the publication of art books, even though it does both, it is above all a creative pot: working with artists, curators and writers, Guðrún brings together thinkers to open up enriching conversations.

The books are the outcome of long processes which involve many characters, summing up their personal approaches and points of view, in order to create multilayered shows and multifaceted objects which encourage never ending exploration.

On one hand the books are the result of a wide cooperation, while on the other hand they are very personal and intimate objects for the reader. Guðrún explores and stretches the concept of book, ‘uns is a revolutionary reaction to the always-on-the-rush contemporary world we are living in: the book is understood as a personal medium of art which follows the reader’s inner and physical rhythm. The publications of ‘uns are gateways through which you can connect to art wherever you are and whenever you have time, they are devices which open up to portable exhibitions. By having a book with you, you have the possibility to go back again and again to those concepts or those artworks when you need to, building up a closer connection with art and disclosing the multilayered meanings contained in the artist books.

The writer Milan Kundera suggests in his novel Slowness that slowing down is a way to remember, it is the condition in which we can stay connected with ourselves and with the world around us, while speeding is the better way to escape of forget something, because while running we can’t have a comprehensive view of where we are and what is happening around us. Milan Kundera has a good understanding of the contemporary world: he clearly sees how technology and the pushing pace of modern life is changing our way of communicating and of relating to the outside world. A similar reflection brought Guðrún to found ‘uns, since the art world is also affected by this collective acceleration, and sometimes decelerating is the key to reset a personal pace according to our inner needs.