„You are the Input“ by Ingunn Fjóla Ingthorsdóttir at Gallerie Herold, Bremen 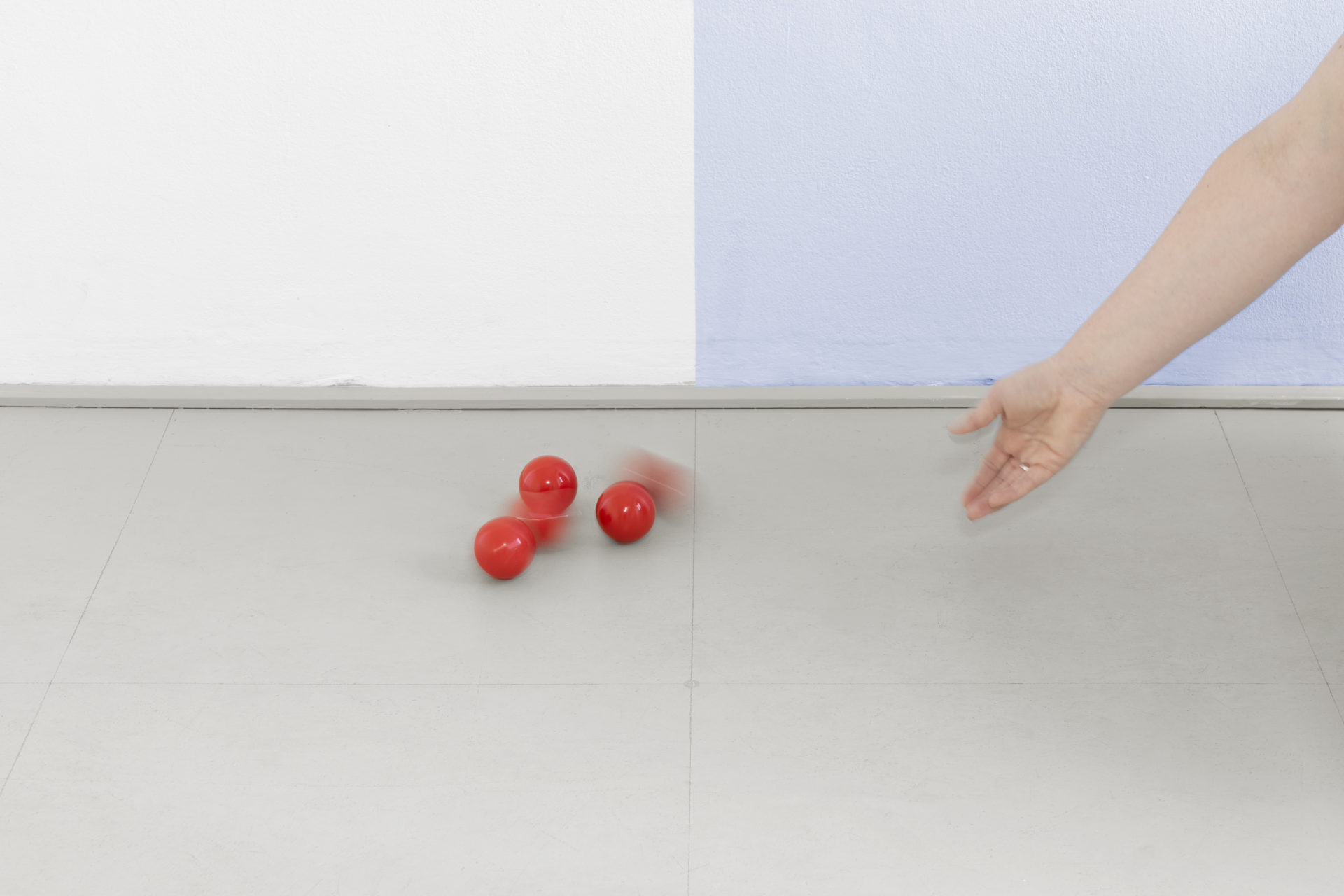 „You are the Input“ by Ingunn Fjóla Ingthorsdóttir at Gallerie Herold, Bremen

Arriving on the train to Bremen, I found the artist-run Galerie Herold by following a set of abandoned train tracks from the station. Upon arriving in the gallery, I stood in the main door frame and looked into the exhibition by Ingunn Fjóla Ingthorsdóttir, seeing the alignment of three frames in perfect alignment ahead of me. As I stood in the doorway and looked into the exhibition, the last frame caught the exact outline of a panel of pastel pink on the far wall; framed in such a way, it seemed as though a panel of pink glass was set in the last frame. This same optical illusion occurred every time the frames spun into alignment with one of the pastel panels on the wall. 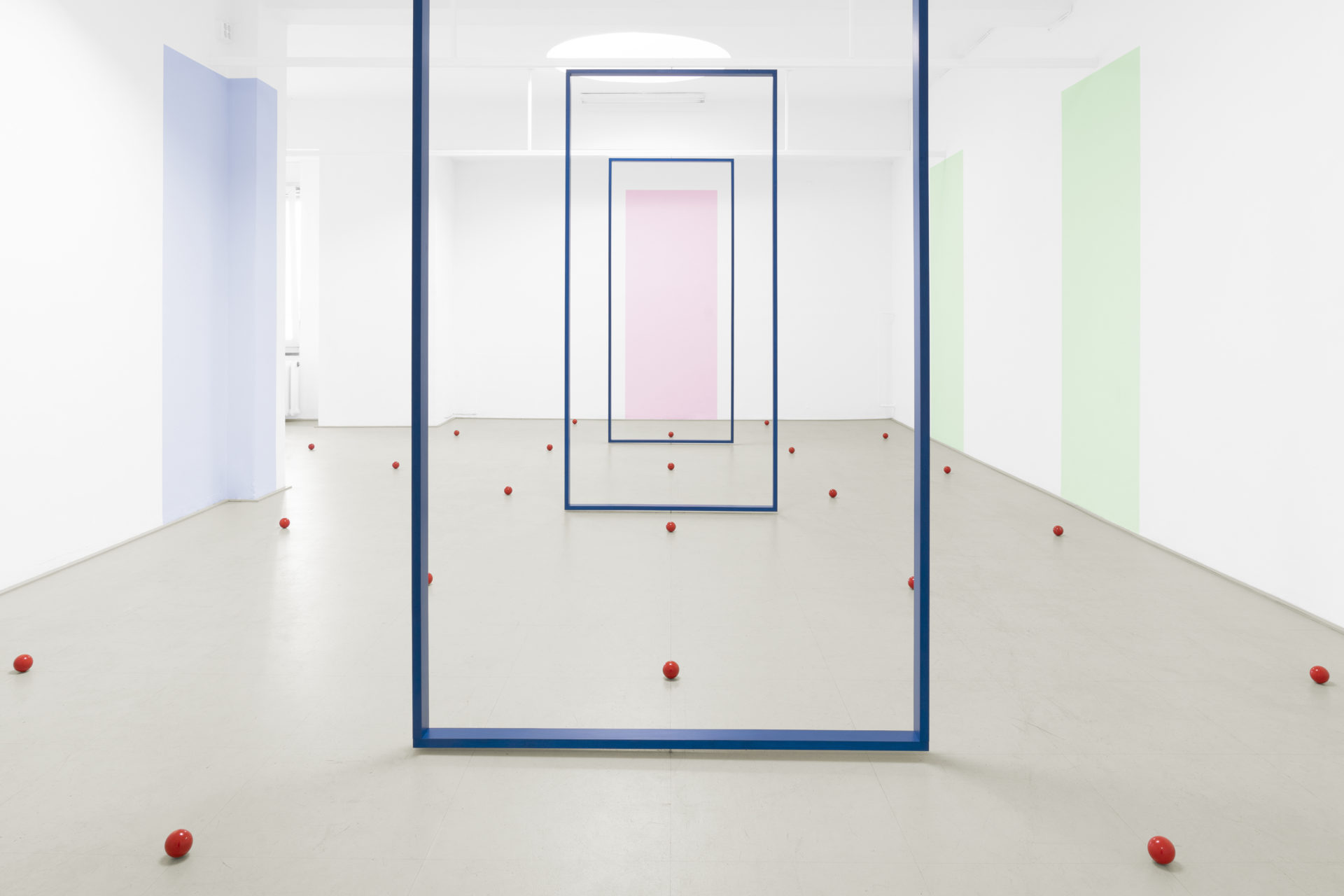 The impression was of being in the middle of an optical illusion on a scale fit for the human body, especially because on the floor of the space was lightly drawn a grid-like pattern; the exhibition’s title, You are the Input, added to the impression that the optical illusion was about perspective in painting and emphasized the way in which the input of the viewer has already shaped and interpreted the scene just by looking. However, in this exhibition, the viewer is invited to go further than looking and actually interact with the scene by rolling the bright red snooker balls across the floor, hearing their light ‘smack’ into each other, and spinning the frames on their axis to create new variations of the scene as they fall into and out of alignment with the pastel-painted panels spaced throughout the room. The title also refers to inputs in systems as the installation can be seen as a systematic pattern that is disrupted by the input of visitors.

The round red balls could be a button of some kind in which moving them from one location to another sets a system into motion that follows a sequence unbeknownst to the visitor. The round red balls could also be all the uses of circular spheres ever, not to mention, the demarcation on a map in which the red dot symbolizes where you are. This implication pushed the perspectival study at play in the exhibition into a much wider study of the body in space. I soon began to experience the exhibition as though I were in a landscape painting. 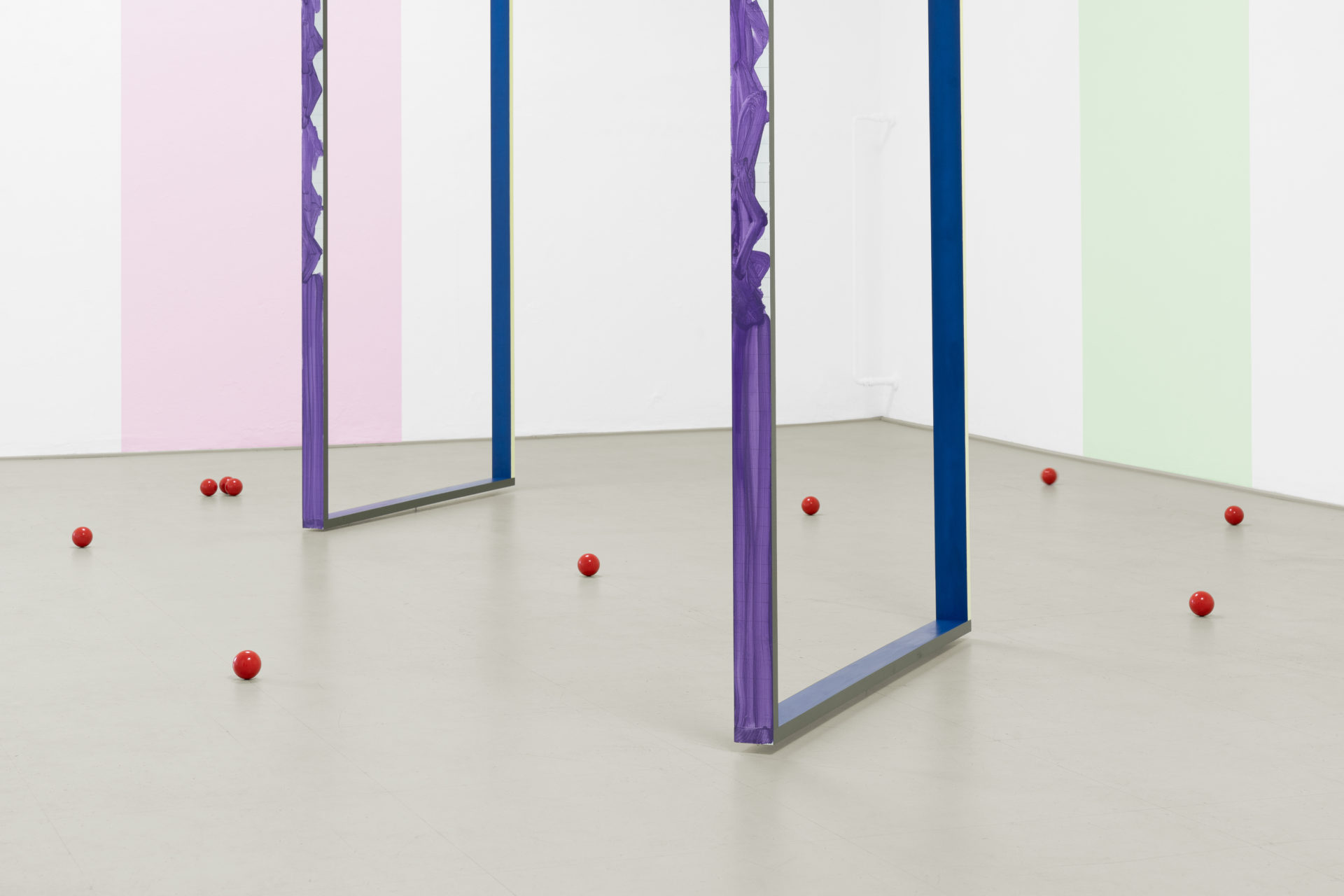 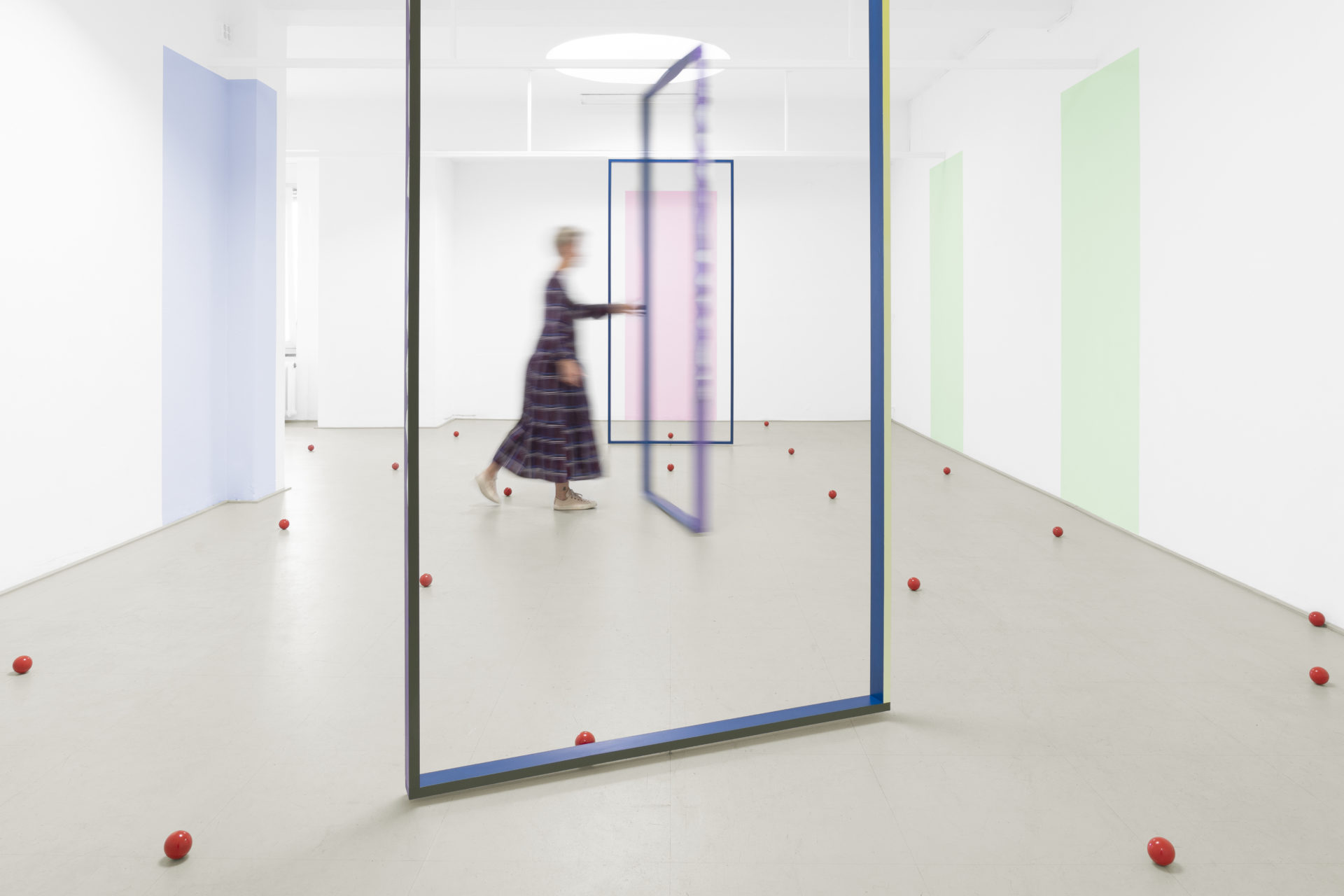 What is incredible about Ingunn Fjóla’s installation is that she sees painting as being the starting point for her practice. With the perspectival inquiry of a painter, her installation takes as cue all of the changeable factors that go into the act of painting as well as the viewing of a painting. Among the moveable materials are frames that can be set into rotation on a center axis, reiterating the notion of the frame as being something the viewer has a choice in the extent of their engagement. As well, the way in which frames represent a certain ruling function in aesthetic experience is brought up for questioning. The frame, instead of being a ruling factor, becomes part of the shifting perception of the space. In conversation with the artist, she told me more about her relationship with painting:

„I have always seen painting as the foundation of my art practice, even though I am not a very typical painter, as I usually make installations or three-dimensional work. I am very interested in the history of painting, especially abstract painting and the evolution of what is often called expanded painting. But my relationship to painting is also full of contradictions. The question of how to do something new within this old and loaded medium is a challenge that fascinates at the same time as it frightens.“

While there is something of the systematic in the installation, like a human-scale model of systems theory, its participatory nature is like an analog recreation of something we are more familiar with through a digital interface, whether it be a videogame, or simply navigating apps on your phone. It is as though the viewer is shown the way in which the relativity of perception cannot be understood without the process of looking. As a model of a possible universe, the exhibition (and art in general), offers a way to observe the special significance of the role of the eye in perceiving and the influence of frames of varying kinds. 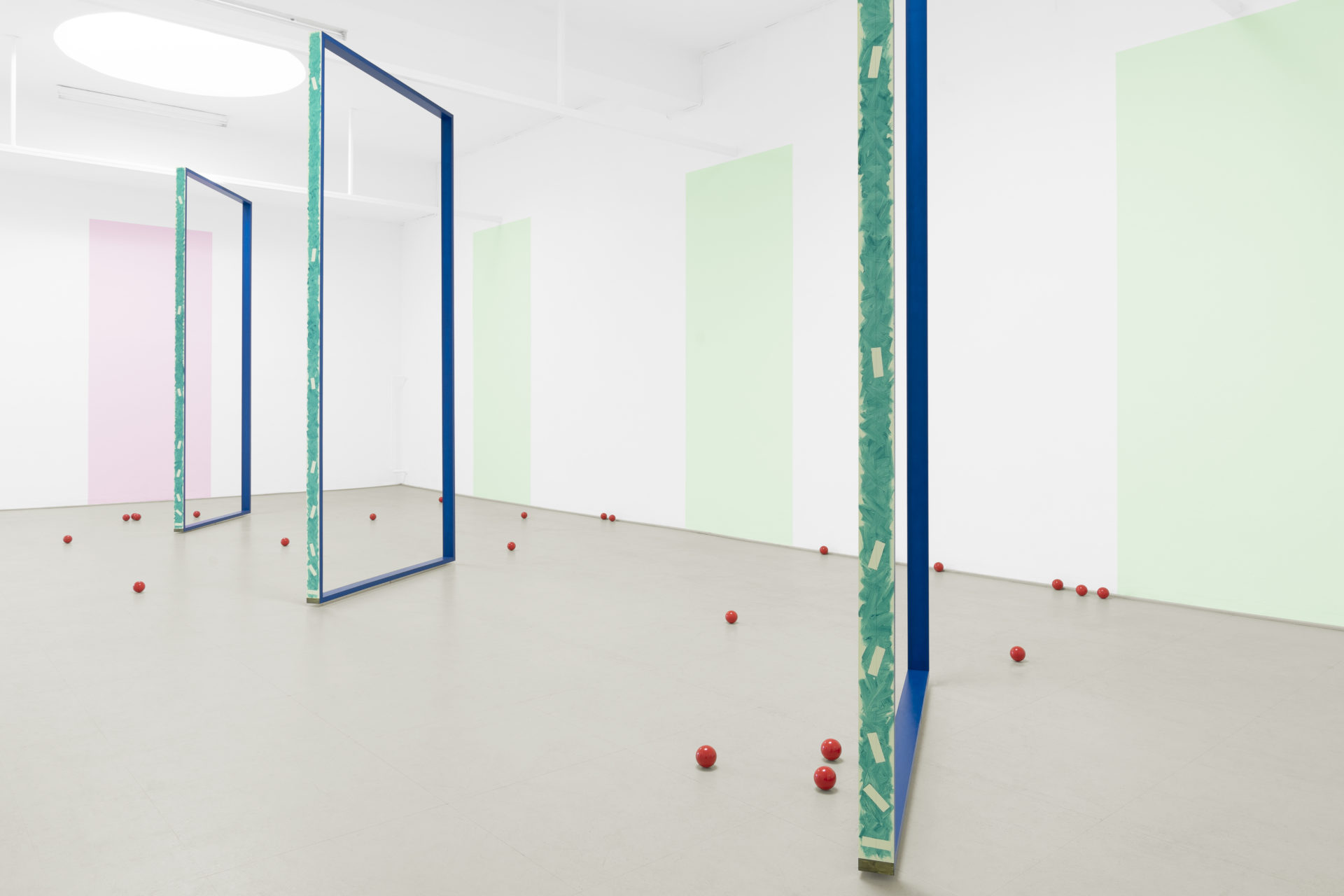 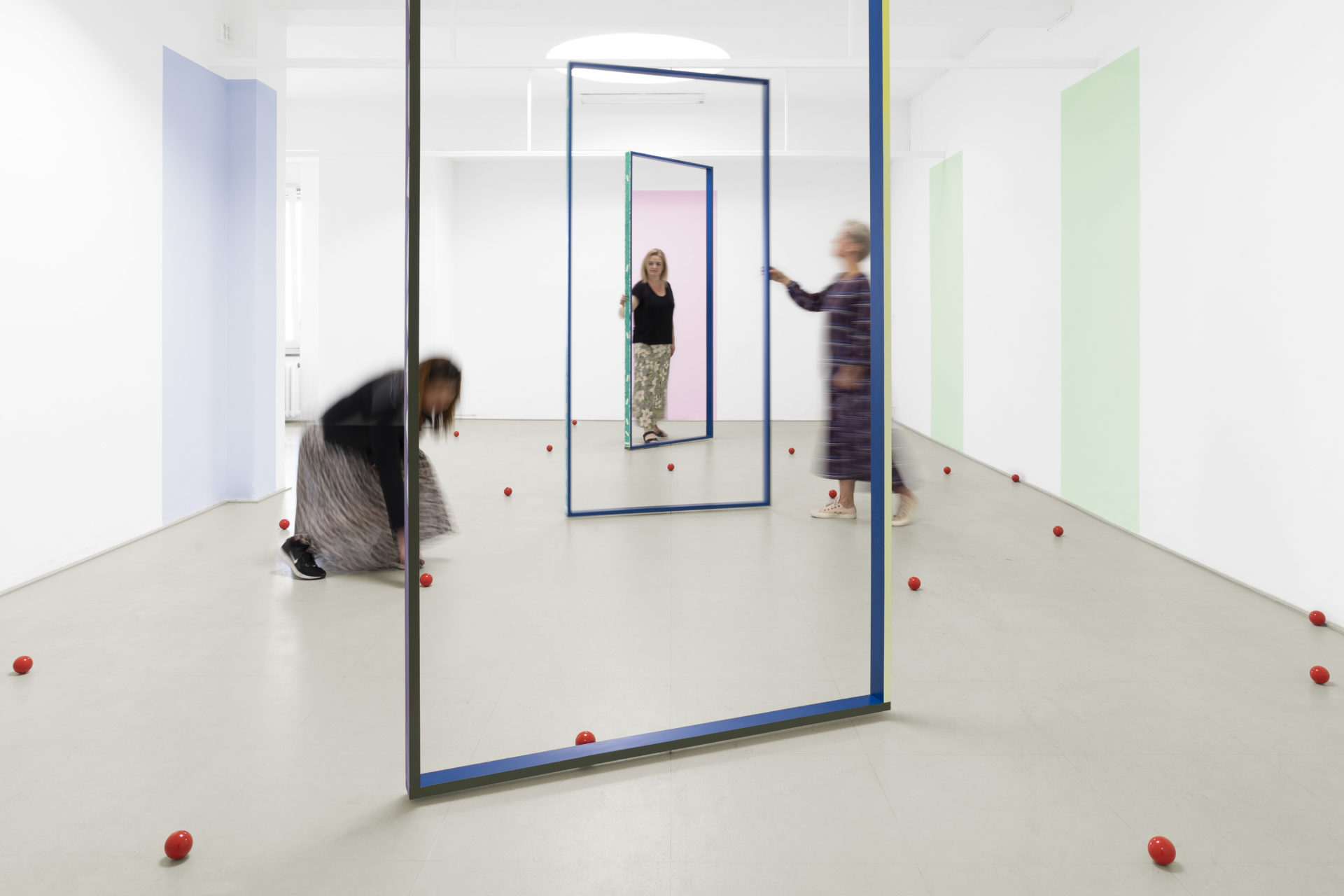 This is perhaps where Ingunn Fjóla’s question of how to do something new with the medium is most striking. It is a slow exhibition, however, revealing itself to you as you spend more time looking. Other questions arise the longer you stay, such as, what is the meaning behind the outer frame being the only non-geometric pattern in the space (it is painted in an unfinished manner, greatly contrasting with the rest of the monochrome swaths of the space). Also, the backs of the frames have been curiously painted half yellow on two corners and half matte grey on the other.

As I helped the gallery manager reset the exhibition, which meant placing all of the bright red snooker balls on circular placeholders at the intersections of a grid-pattern drawn on the floor of the two rooms of the exhibition and setting all of the frames into alignment, the manager tells me that the bright yellow paint on the frames match the pastel yellow-painted in panels on the walls, but only at certain hours. At this hour (5 pm on a Sunday), it does not correspond to the light arriving from the windows, but I believe her.

„I love painting (the texture of paint, the colours, the painting strokes, the scent, the canvas, the frame, etc.), but at the same time, I feel very restricted by the two-dimensional picture plane. For me, both the making of painting and viewing painting is a very bodily experience that involves all of the senses. That’s why I usually make works where the viewers have to move around to experience it, take it in through their bodies. My interest in the viewers experience has in my most recent works evolved into making the viewers become a more significant part of the work, as the guests of the exhibitions activate the works, sometimes by their actions or touch or sometimes just by their mere presence in the room (where I have used motion sensors).“

In the exhibition, painting is an idea and an experience in which we are creatively involved, although not necessarily through painting, and are not merely passive consumers of images. You are the Input takes the viewer back to the phenomenology of painting. A new mode of painting emerges that brings more than ocular centric perception. A bodily engagement with the world as it occurs on the boundaries between the body and its surroundings, or as an overlap between perceiver and surroundings, in a way that links bodies, movement, and objects into a unified system. The painter tries to catch the movement from what is sensed, felt and seen from the small details of perception to perception within a universal sphere.

The exhibition You are the Input was on view from September 13th to October 13th at Galerie Herold in Bremen, Germany.