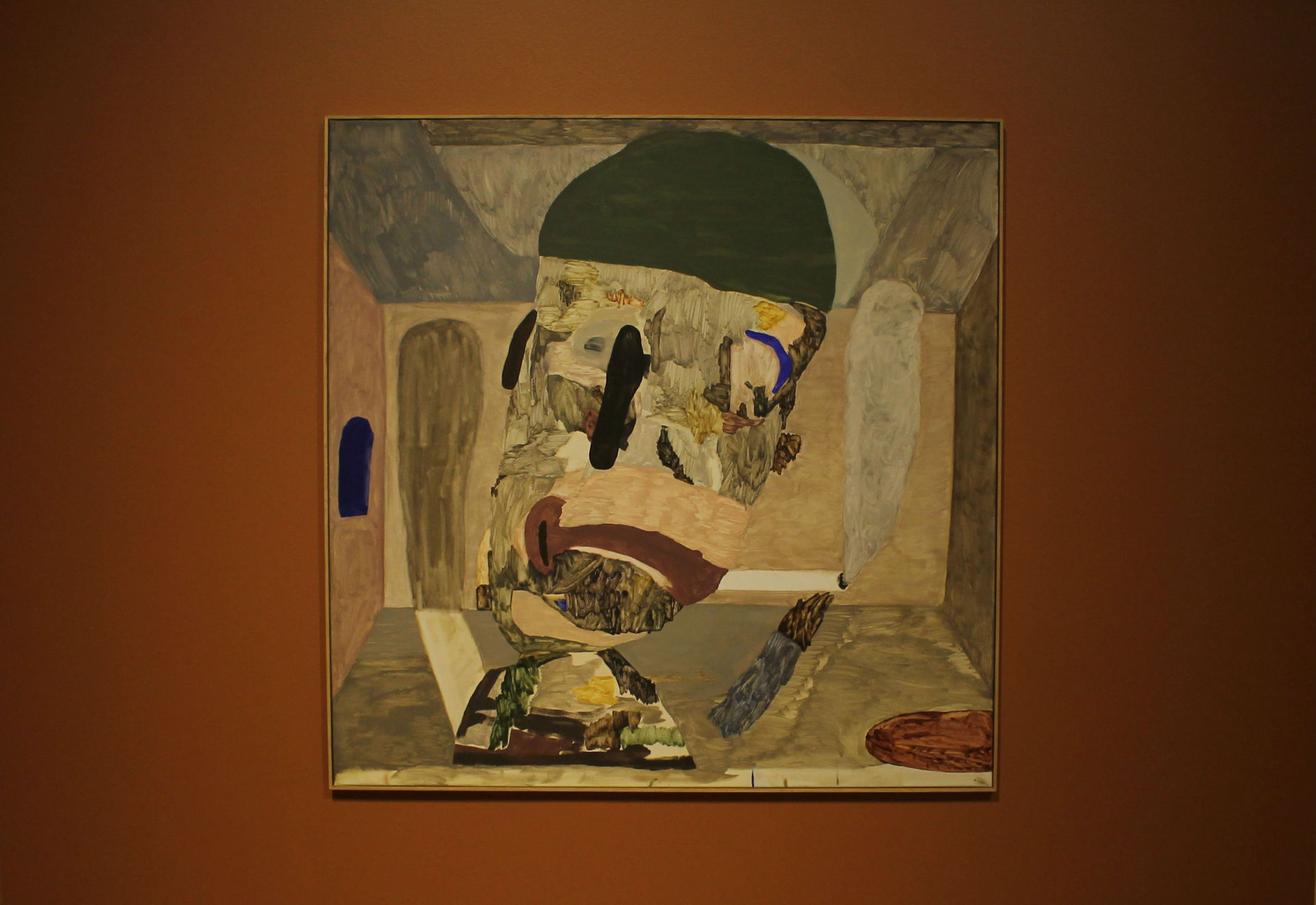 Guðmundur Thoroddsen is best known for paintings and sculptures which used to embrace the irony and dreamy qualities of surrealism, opening a window to a parallel universe where absurdity is presented as ordinary, works which have been often connected to a critic to masculinity and to our patriarchy society. His solo show Snip Snap Snubbur at Hafnarborg features some new works which demarcate a new step in the development of the artist’s practice, a shift towards a more abstract aesthetic enhancing the material aspects of the works.

His will to engage in a more material-orientated practice has been hindered by his parallel need for a narrative, an important part of his practice which he couldn’t let go completely, and which functioned as an anchor to prevent him from sinking into the uncharted waters of abstract art. Through the use of the oil paint on canvas the two urges converge into pieces where subjects and recognisable elements are present but unified in a single level of existence: characters, objects and backgrounds cohabit blended in masses of colours where shapes are defined not by distinct boundaries but by the diverse patterns and textures. The same process is visible in his sculptures: he has ceased using the wheel, an instrument which used to give some kind of stable shape to his works, and decided to make them manually from start to end, playing with piling up clay in different layers. The sculptures, just like his paintings, look like melted, collapsed, formless objects made by children in a kindergarten, suggesting a certain enjoyment and lightness behind his practice, but prompting an uncanny feeling in the viewers because they resemble human beings and familiar objects, but deformed and not quite matching the way we see people and objects in our everyday life. 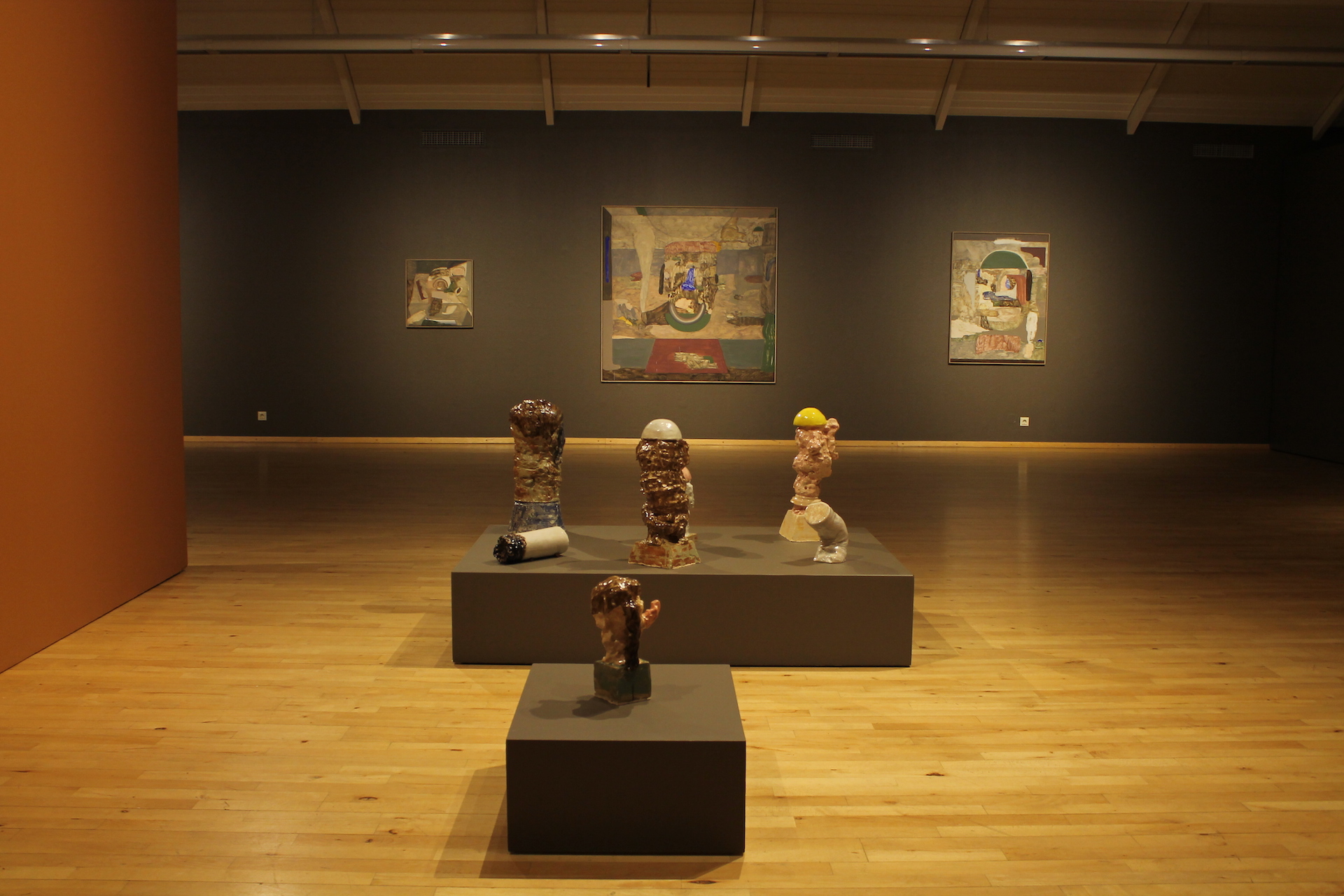 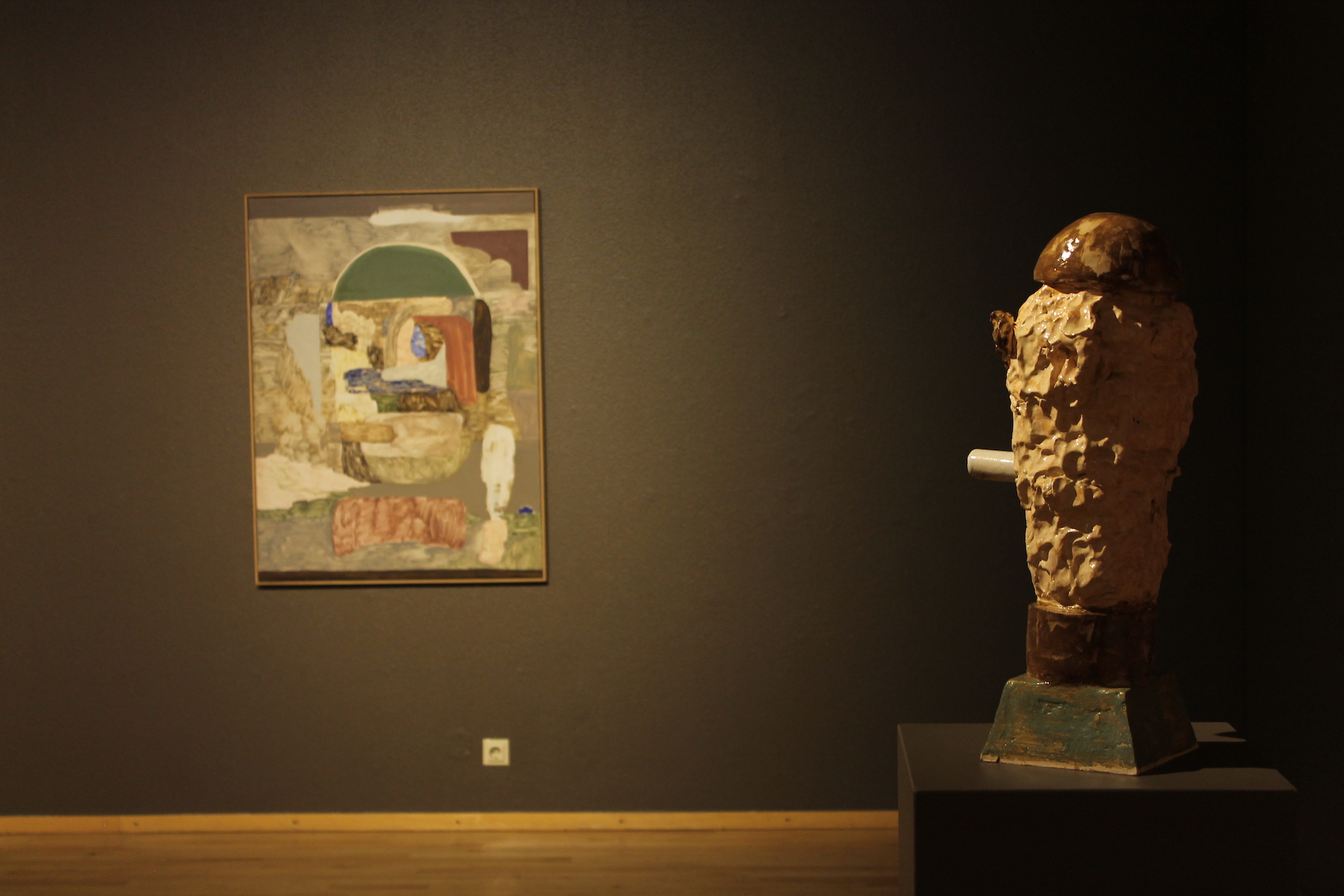 In his new works the focus on material aspects gained more importance in the composition of the paintings, taking over the meaning of the works themselves: the references to the real world are reduced to echoes, mediators in this shift from a figurative practice to a more abstract one. His new works feature men smoking, walking around anxiously, in small interior scenes or in imaginary landscapes, deconstructed and melted within the background, like visions from a different universe where there is no third dimension, no perspective and no physical borders between entities.

The technical aspects of his new paintings have been influenced by Andreas Eriksson, Swedish painter whose practice focuses on landscapes transformed into abstract representations in which viewers can recognise their own places. From Erikson’s painting Thoroddsen took the ability to synthesise the variety of nature’s color gradients and shapes into simplified masses which abstract the original view, creating a sort of new nowhere land. In Eriksson’s paintings the brushstrokes are visible, a style which uncovers the importance of human gestures over a realistic portrait of reality, of human instinct over rationalism. Guðmundur Thoroddsen follows Eriksson’s research for a primordial act, an impetus which comes directly from inside the artist, whom is not trying to emulate but to create, an attempt to produce something beautiful, when „beautiful“ is understood as natural and honest. 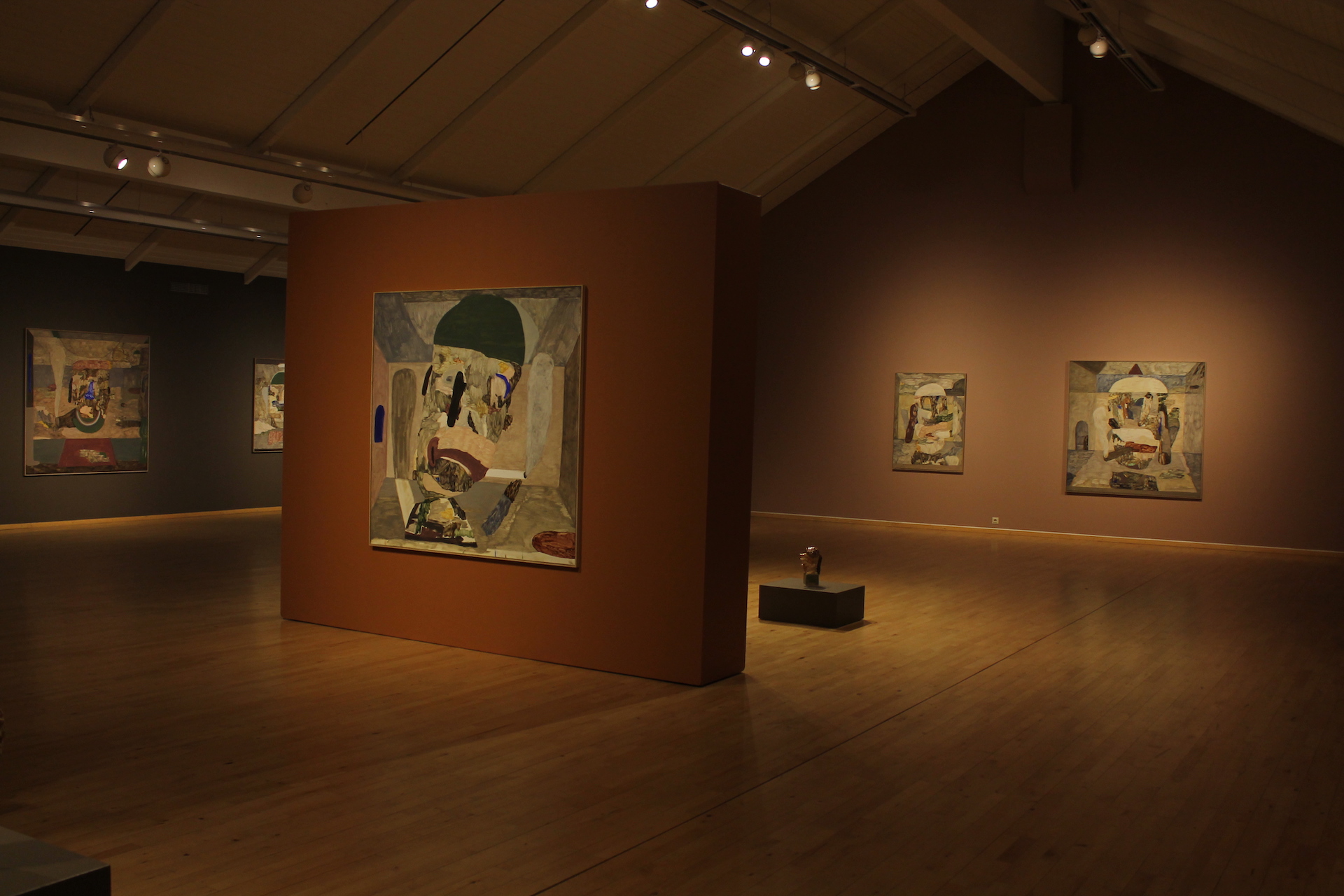 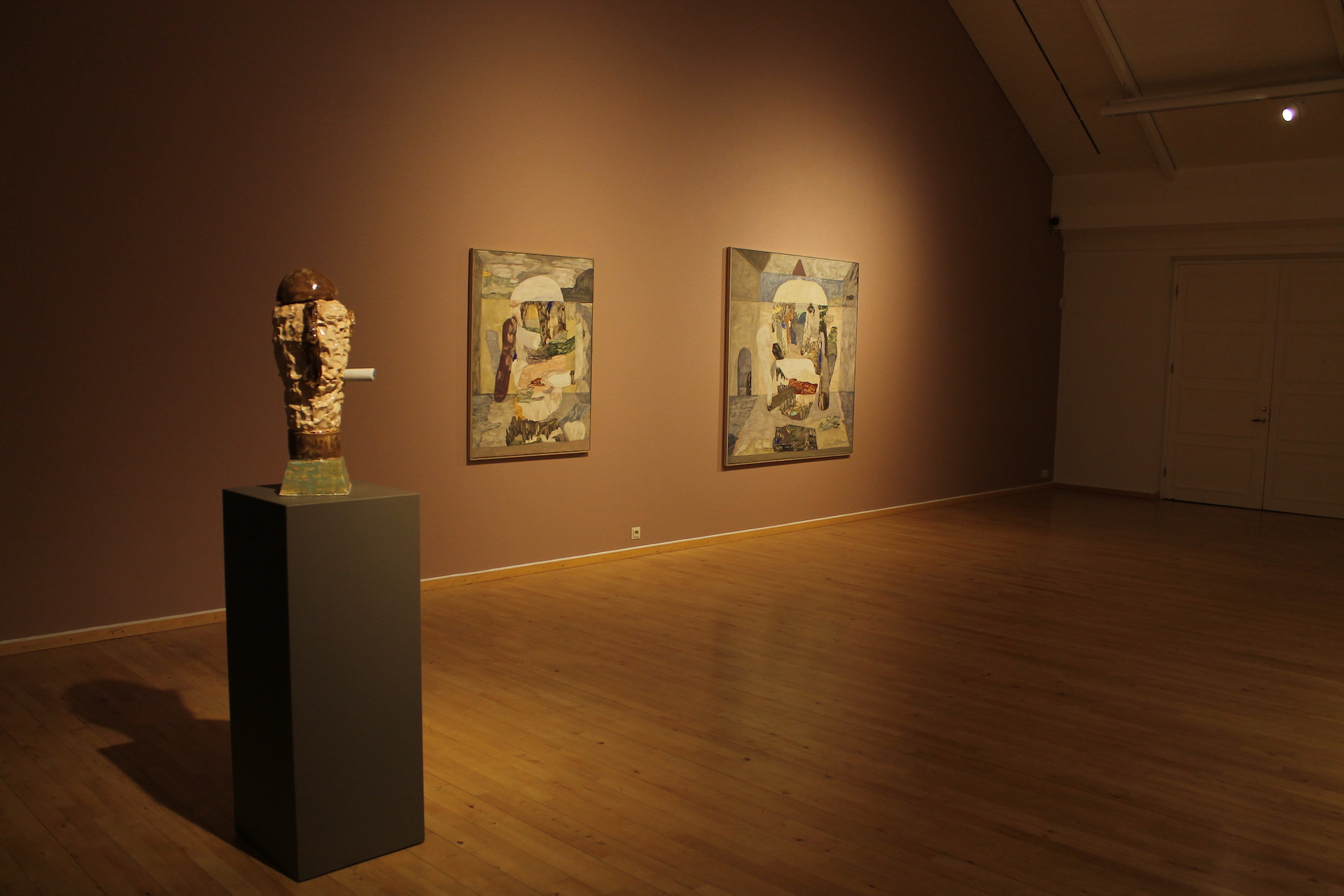 Thoroddsen’s new works are reminiscent of the series of paintings Otages (“Hostages”)  by Jean Fautrier, paintings with great material qualities representing humans’ featureless heads and torsos floating into a no-landscape, barely recognisable as parts of a human body. Jean Fautrier was active during the post second world war, and he, as many others, was dealing with the lack of faith in humanity following the brutality of the war, which he experienced in first person. In Jean Fautrier’s work the dematerialisation of the body, the fade of the subject into the landscape, was a metaphor for the cancellation of identities, and therefore humanity, in the context of the war. Guðmundur Thoroddsen’s work does not have such a dramatic implication, but there is something in those interiors scenes of men smoking which recall a sort of subtle and sneaky universal anxiety in regards of modern times.

The figures in his paintings seem to illustrate what Noam Chomsky reflects on in the documentary Requiem for the American Dream (2015). Noam Chomsky talks about the changes in the contemporary ages through a comparison to what was happening in the 70’, when despite the economic upheavals that followed the postwar economic boom and the war in Vietnam, fights for the rights of mistreated social groups such as black people and women were taking place all over the world, and people believed that the situation would get better at some point. Nowadays, Chomsky says, we are hopeless in regards to a world where conditions are not improving, on the contrary humans rights are called into questions by politics, the environmental problems are growing, and, as a result we don’t see anymore the light at the end of the tunnel. The characters in Guðmundur Thoroddsen’s paintings can be read in relation to this new human condition: they are hopeless, trapped into a room or in a nowhere landscape, overwhelmed by the surroundings, unable to find their identities, lost in the liquid modernity’s flow, the characters are eventually frozen in a time with no future. 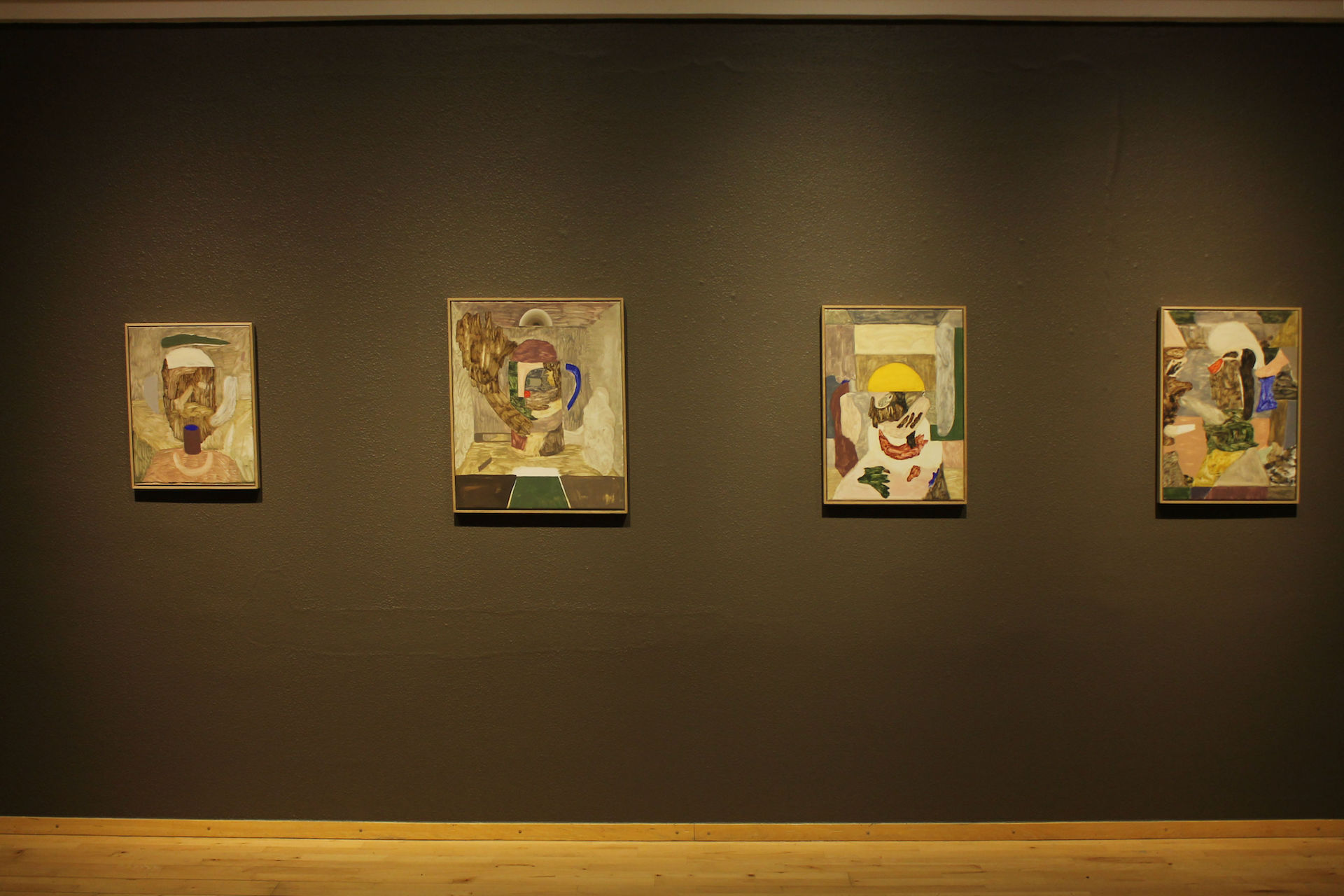 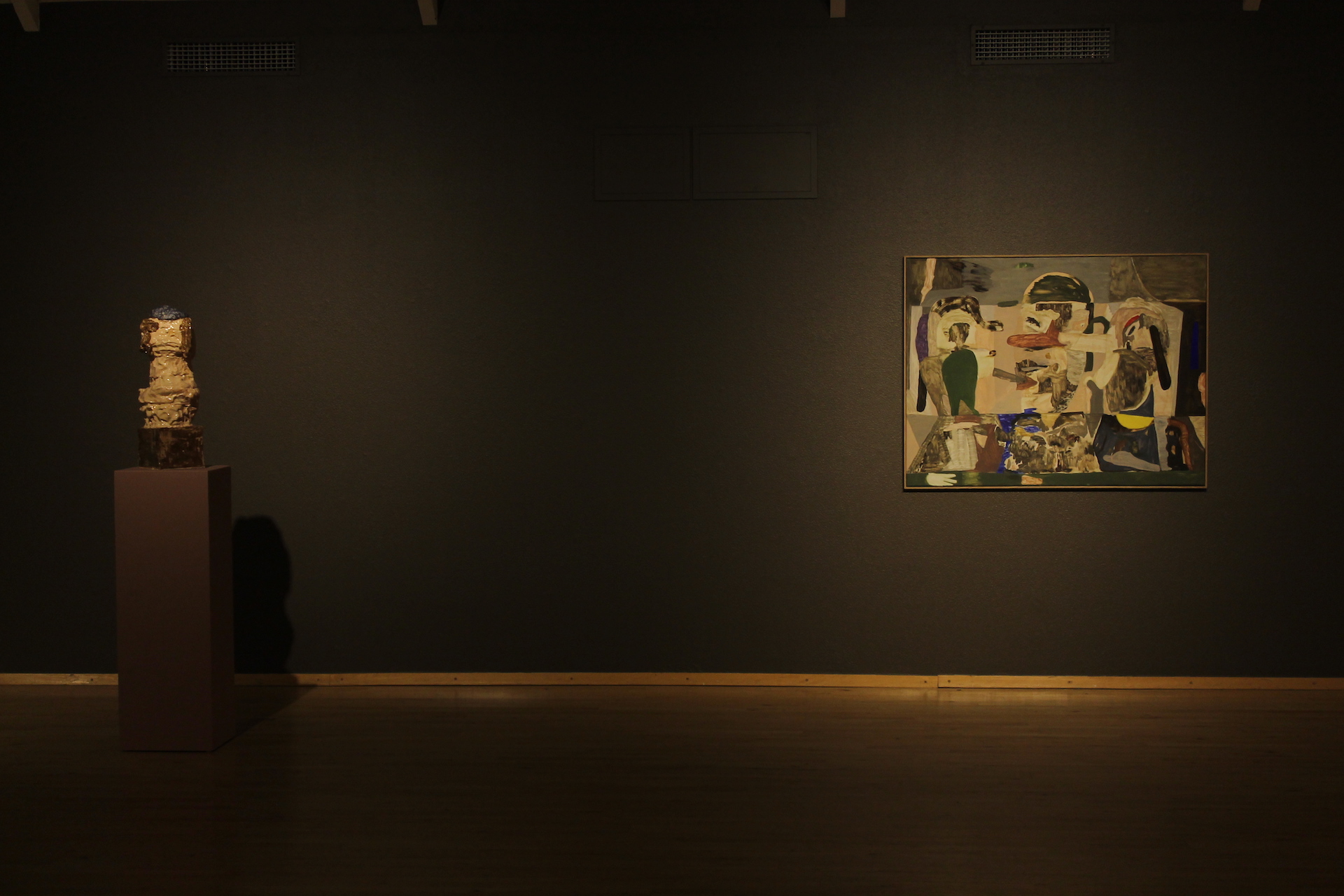 In Guðmundur Thoroddsen’s opinion art is about having fun and he switched to a more abstract approach because he felt his practice was becoming repetitive and he needed to engage in more stimulating work. This prompted his desire to dig deeper behind the surface of his imaginary world and to experiment with a more complex physicality in his practice. The show Snip Snap Snubbur presents a new exciting stage in Thoroddsen’s art, a new direction which could bring to deeper explorations of the material if he continues walking this way. These new works represent a starting point for something new and we are thrilled to see how it will develop, if characters and objects will disappear completely absorbed into the abstract, or if figurativism will take over again. The path is open, Guðmundur Thoroddsen just has to decide if he wants to walk it all the way.