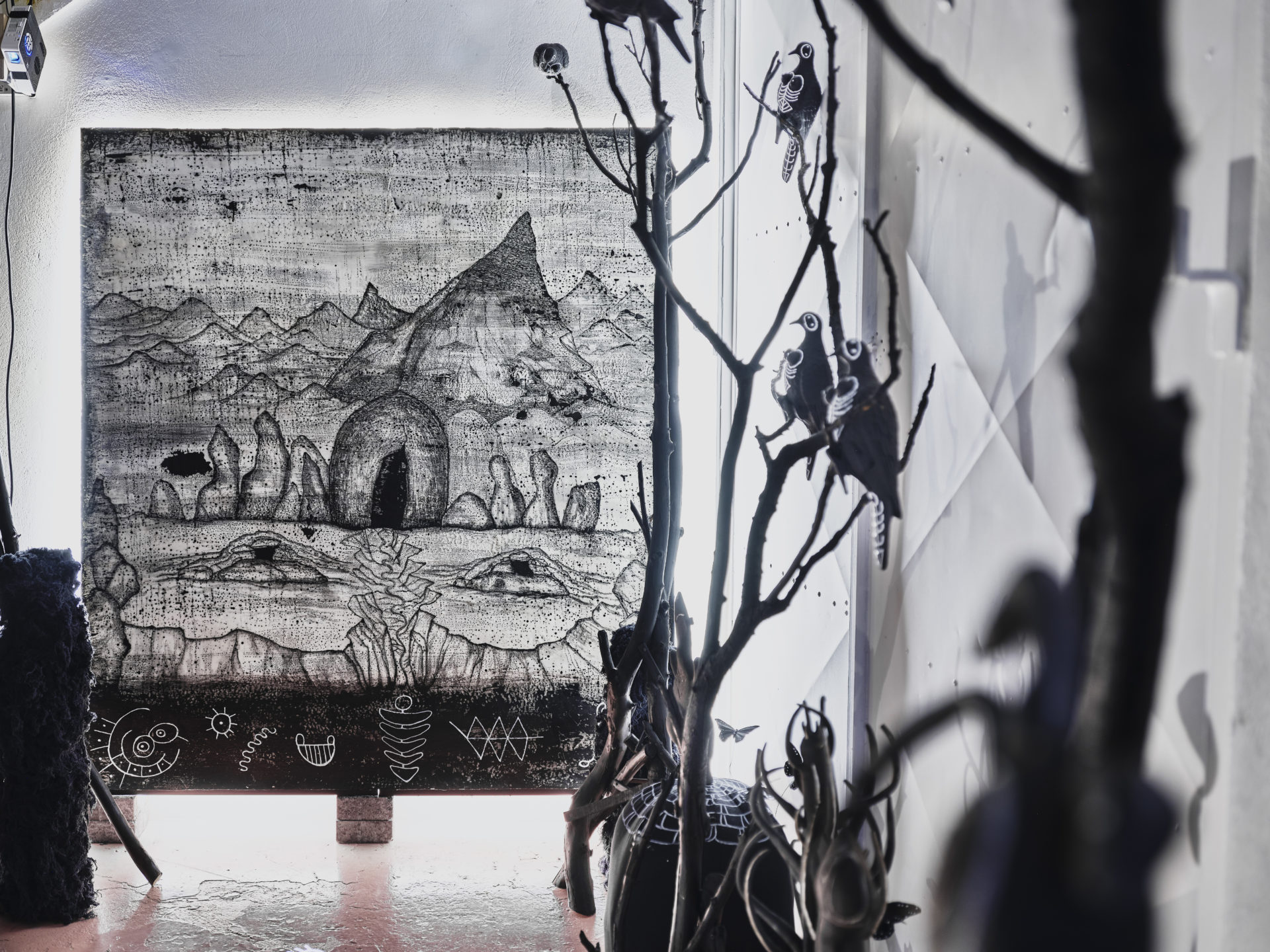 In an industrial suburb of Reykjavik surrounded by car dealerships and warehouses, the home gallery of Studio Sol transforms the large working spaces of the area through a wholly other use than industry. Entering on the lower floor of the building, one is overcome by the immediate shift in atmosphere to something that operates in a softer manner than the surroundings – you have to listen intently to hear its message.

In the exhibition & Again it Descends to the Earth, American/Icelandic artist Kathy Clark creates this initial atmospheric shift of the senses through the weather sounds that greet you (rain and thunder, plus the chords of a lute) and the subdued dusk-light in which a series of bright, shifting symbols dance across the floor. At first, you wonder if you have stepped inside a folklore museum display related to an offshoot of the Hidden People who have magically been making enigmatic sculptures out of lava rock for centuries. Every element comes across as being part of a larger narrative, informed with research carried out by the creator, yet transformed into a personal narrative that blends with a larger, timeless one. 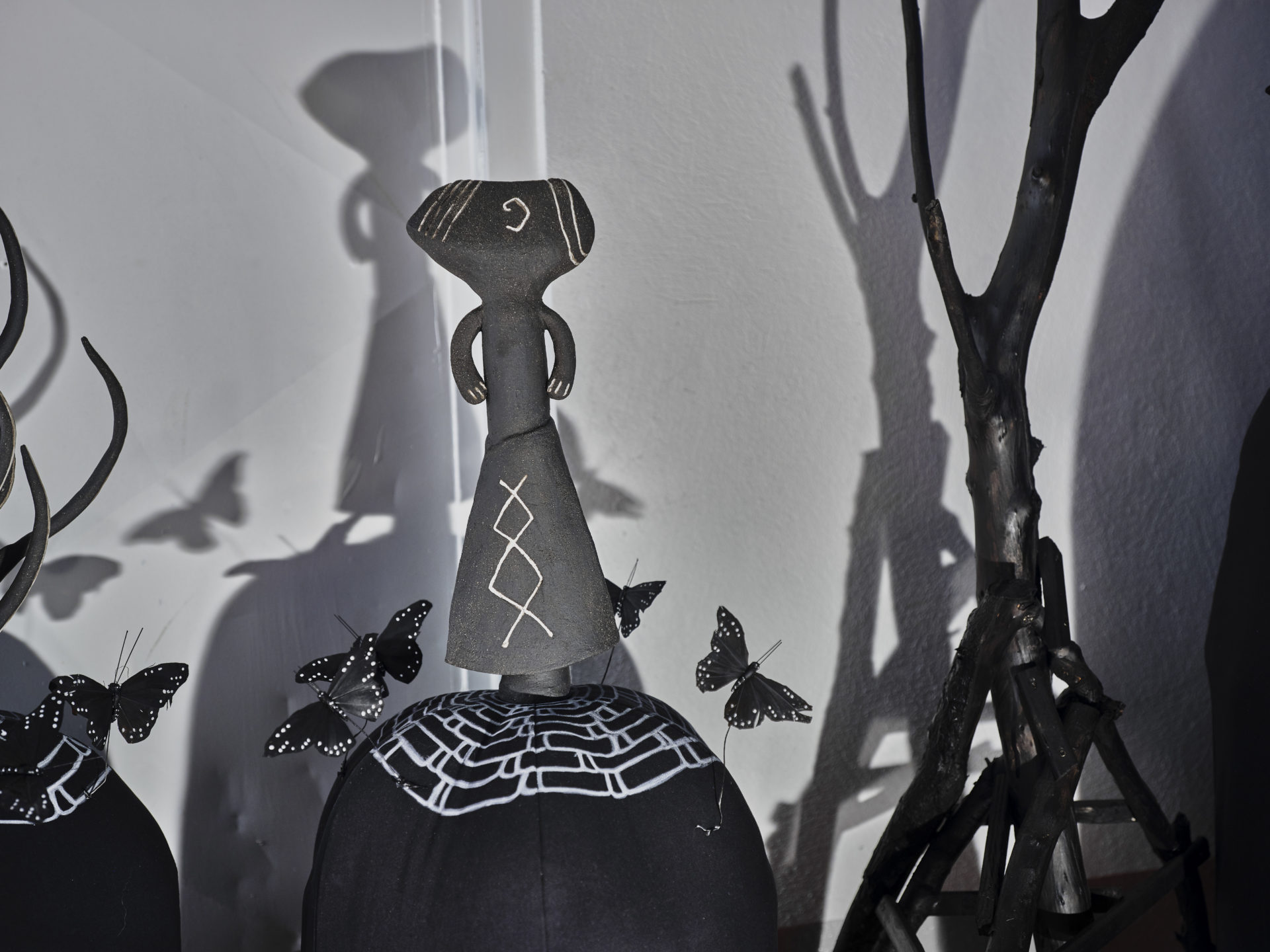 With a tactile sensibility of handmade materials made of clay, yet reminiscent of bone and stone, Clark makes clear the significance between the activity of craft-making to connect their maker to an elemental reality through the timely, repetitive gestures involved in the process of building with natural materials. Large, mound-shape sculptures alighted with ceramic creatures, ambiguously deer-like, have become totems of the exhibition. The beehive motive is also prevalent, but in its completely black display with white lines showing the coiled shape of the structure, the pure symbol is returned to the viewer, as though the signifier were removed. In fact, all of the handmade sculptures in the show are painted a deep, matte black, creating a shadow-like fantastical landscape. 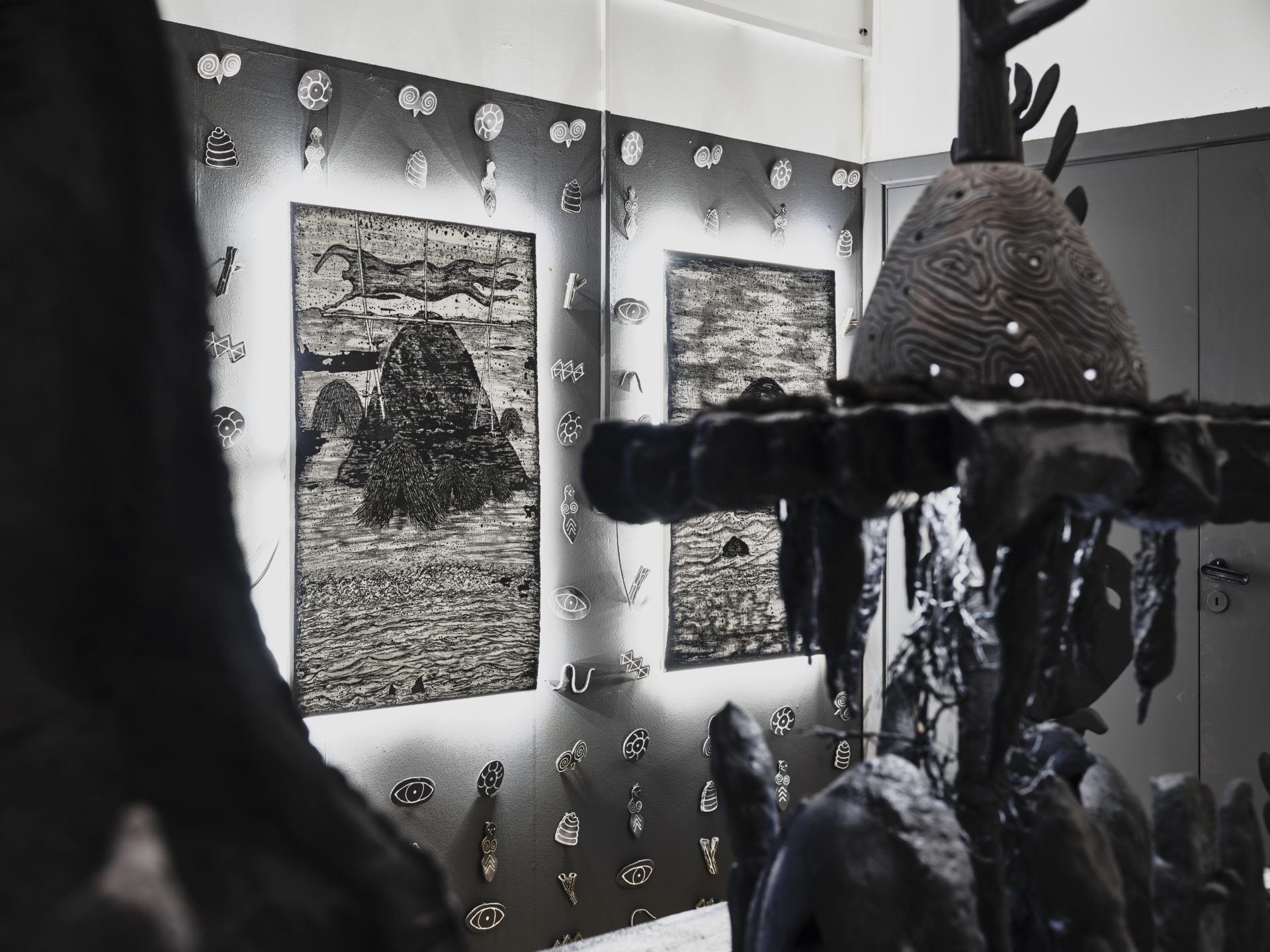 Like the prima materia, or the first matter in alchemy, the matte black color of all the sculptures create a seemingly unified base material of chaos reflecting one of the fundamental theories in alchemy, that of the universal nature of this first matter. The titles of works in the exhibition come from Isaac Newton’s translation of The Emerald Tablet, a text known to have existed between the 6th and 8th century attributed to Hermes Trismegistus, the mysterious figure who is known as the father of alchemy. The cave-like space of the exhibition operates like some kind of prime material that has been burned and distilled, purified into an essence of all things, resonating with the act of purifying materials from nature throughout time.

Other early alchemists are echoed in the wax prints on which are etched in black acrylic, landscape scenes featuring massive stone figures, such as the one onto which The Emerald Tablet was purported to have been written. The alchemical manuscripts depicting scenes of processes laid out in metaphorical narrative landscape scenes found in Michael Maier’s Atalanta Fugiens (1617), for instance, are especially reminiscent with the etchings of large stones upon which text is carved. The wax casting of the tableaus creates a tactile overlay making them seemingly reach further into the past than even their vast landscapes suggest. 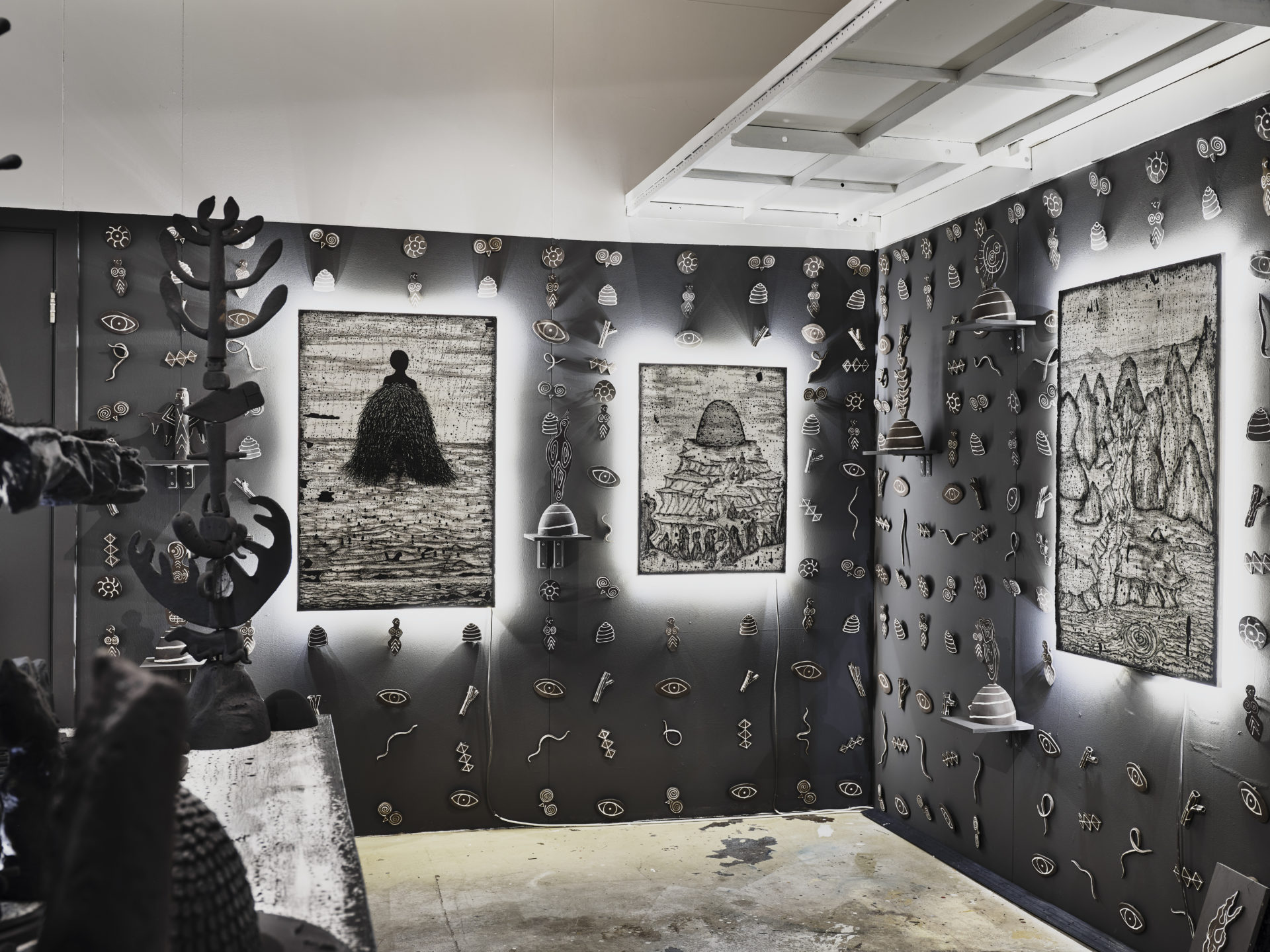 Clark has created a kind of feminized tablet in her tableau, a rewriting of the text towards a matriarchal base in which it is explicit the metaphor of the female figure being anthropomorphized into a landscape. The fantastical archaeological complex of landforms makes an homage to the landscape as inherently female with the ribs and vertebrae making a middle world, upper world, and a tree of life erupting towards the sun, the mountain temple pyramid of the female figure’s head. Clark answers mysterious origins of landscape forms with her own landscape reminiscent of the Funk Art movement of California in the 1960s; large-scale assemblage works of cultural detritus. Yet instead of mid-20th-century cultural detritus of Americana, Clark’s Funk Art is pulled from the ruins of Neolithic pagan sites. 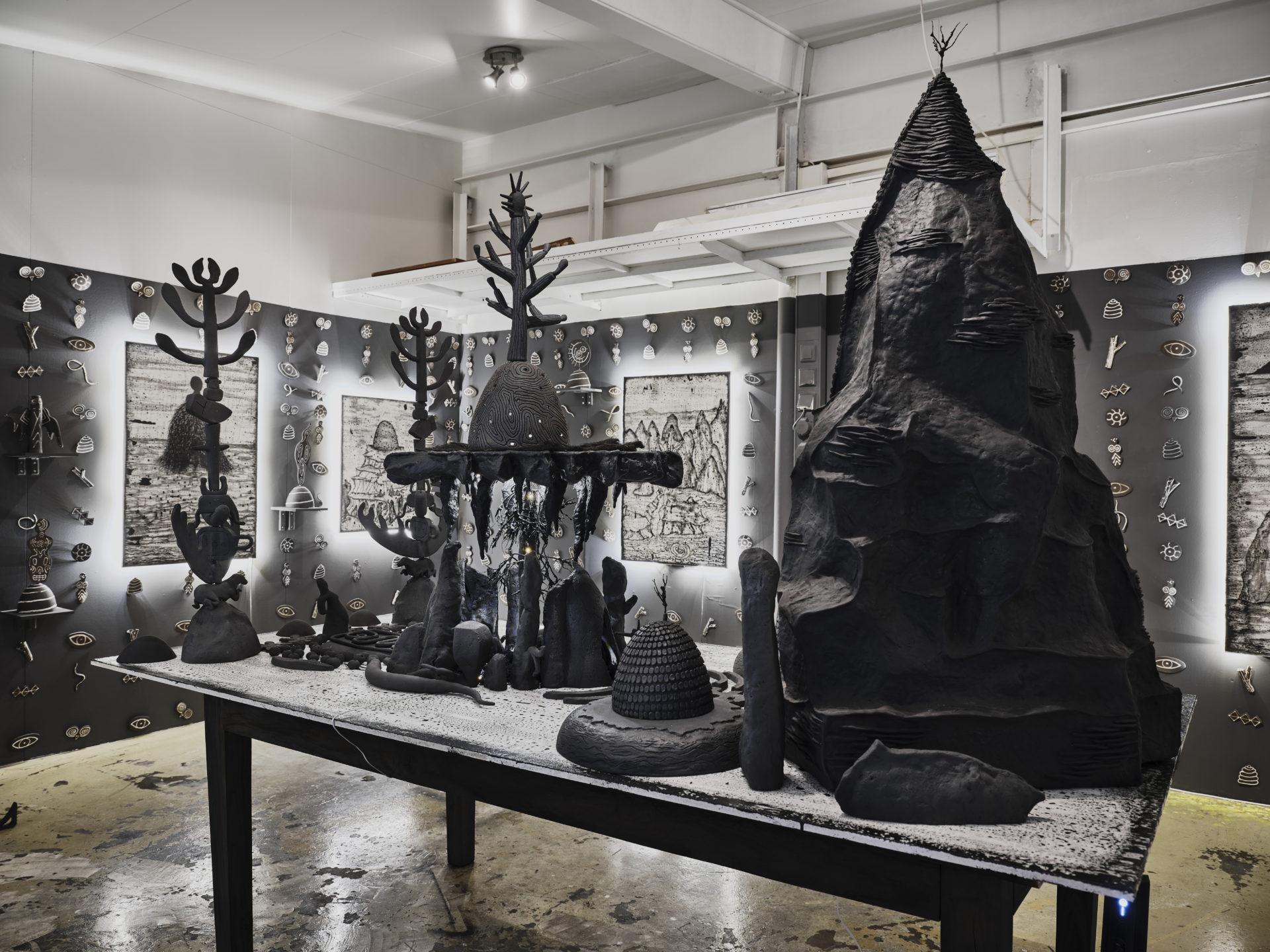 On the black walls are situated grids of palm-sized, ceramic icons, also painted black, creating a further sense of meaning arriving from depths of depths. It is possible to read the icons as a wall poem from multiple directions as a spatialized incantation, even more so if you choose to read the symbols out loud. The black symbols’ onto which white details have been etched makes it particularly stark in creating a distilled sense of the meaning behind the symbol being brought into form, as though they were tools in relearning the entire theatre of their meaning in a pantomime. The icons of sun, bird, eye, snake/earthworm, triangle, branch, and beehive create a continuous incantation, a poem brought to life through the low hum of a beehive making all of the pieces seemingly vibrate on the verge of vocalization. Everything alludes back to the female figure as both a tomb and a womb where the entirety of symbols, images, and sounds originate as an empathic response to a confrontation with the unknown.

The home gallery of Studio Sol with its location in an industrial neighborhood makes a further integument to the many layers of the landscape, capturing the New Weird Divine*, in the most unsuspecting places.

*A term used by the writer, Elvia Wilk: ‘The Word Made Fresh: Mystical Encounter and the New Weird Divine.’

Sources: Pereira, Michela. „From the Tabula Smaragdina to the Alchemical Fifth Essence.“ Early Science and Medicine 5, 2 (2000).

All photos by Svenni Speight.