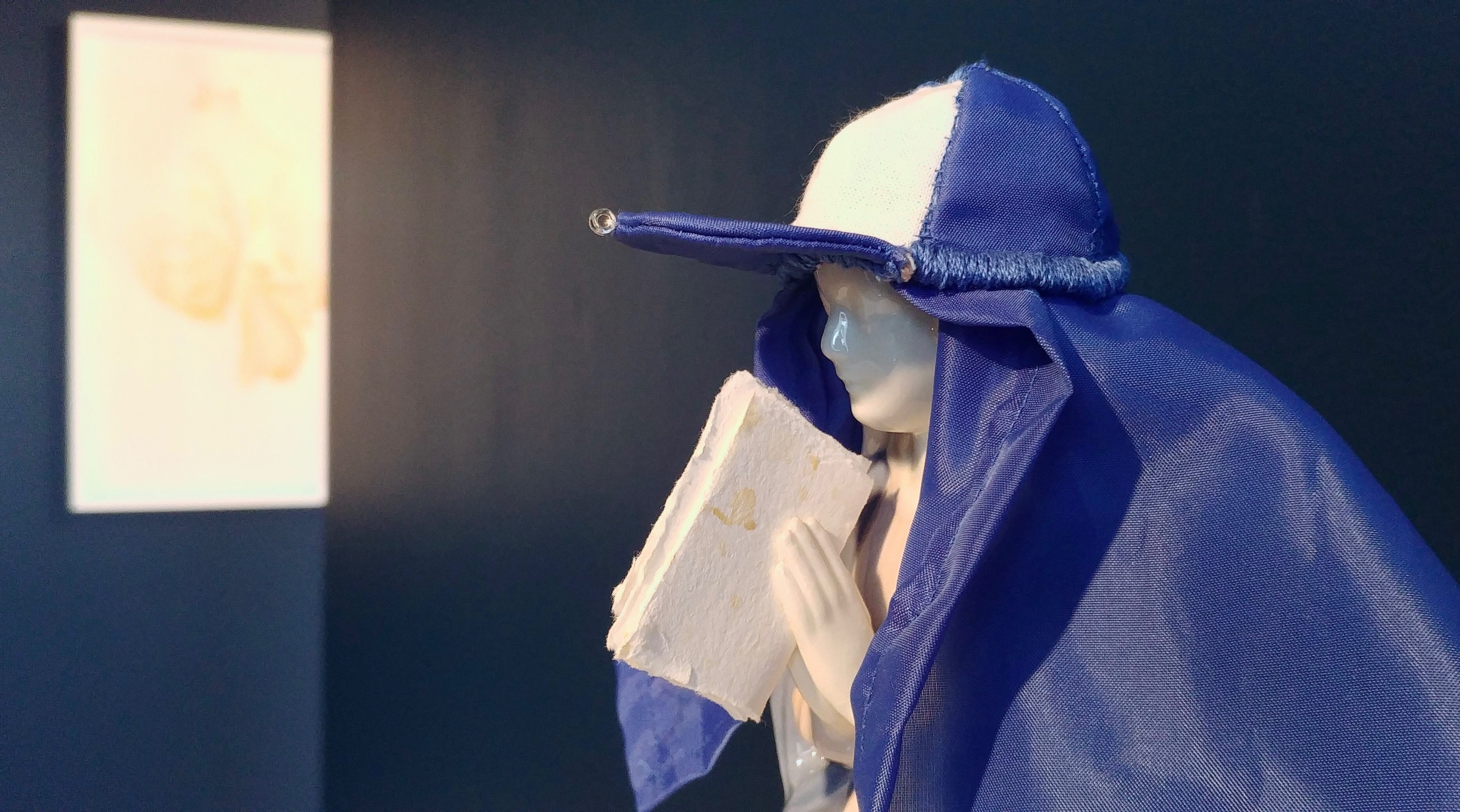 Having grown up in Italy, where the Roman Catholic Church is such a powerful institution and it is deeply rooted into the everyday lives of everyone, I can’t help seeing in Mary a symbol of a submissive femininity, an objectified woman, a tool through which the Church has kept women in a position of inferiority for centuries. Mary, even though she is worshiped by Catholics, has never reached the role of goddess, she constitutes a body through which God acted. In fact, women in the Catholic Church are prevented to take on high positions in the ecclesiastical system: they can be nuns, but not popes, not bishops, not even priests. My position in this regard is closer to Simone de Beauvoir’s ideas, she wrote in her book The Second Sex that “Beyond question the women are infinitely more passive, more subservient to man, servile, and abased in the Catholic countries such as Italy, Spain, or France, than in such Protestant regions as the Scandinavian and Anglo-Saxon countries. And that flows in large part from the women’s own attitude: the cult of the Virgin, confession, and the rest lead them toward masochism”. That is proven by the fact that women didn’t even have the right to vote until 1945 in Italy, while in Iceland they got it in 1915.

However, regardless my opinion, reviewing those stories which shaped our culture and heritage is a way to correct people’s behaviours and misbeliefs, so I will put my personal feelings aside and try to look at Mary as a revolutionary woman, like the Icelandic Love Corporation presents her in their show The Newest Testament at Hverfisgallerí.

Mary accepted the role of mother of God given to her by God’s messenger without asking any questions, without thinking about how her life was about to change, she accepted her fate and accomplished God’s will. That acceptance, that “yes” said without questioning anything, is proof of her courage. That “yes” constitutes a declaration of acceptance of all the pain which was about to come, a sacrifice for the sake of humankind, she didn’t ask for such a responsibility, but she embraced God’s decision anyway.

Acceptance is a value which is often forgotten, we live in a society which tells us we can do whatever we want and encourages us to pursue our dreams and desires. But life is not all sunshine and roses, learning how to process disgraceful events and keep your head up in difficult times is of vital importance. We need to be flexible, adaptable, ready to accept what life confronts us with.

Mary’s capacity of accepting and adapting to situations is symbolised, in the exhibition The Newest Testament, with water. Liquids are highly adaptable to different containers’ shapes because the links between their molecules are not really tight. They can change their physic state depending on the temperature and conditions, e.g. freezing into ice or evaporating when the temperature is high enough. Water also means life, when exploring new planets astronomers look for residues of water, no matter their physic state. Water is the means by which they determine if planets have ever been suitable for life or will be in the future. 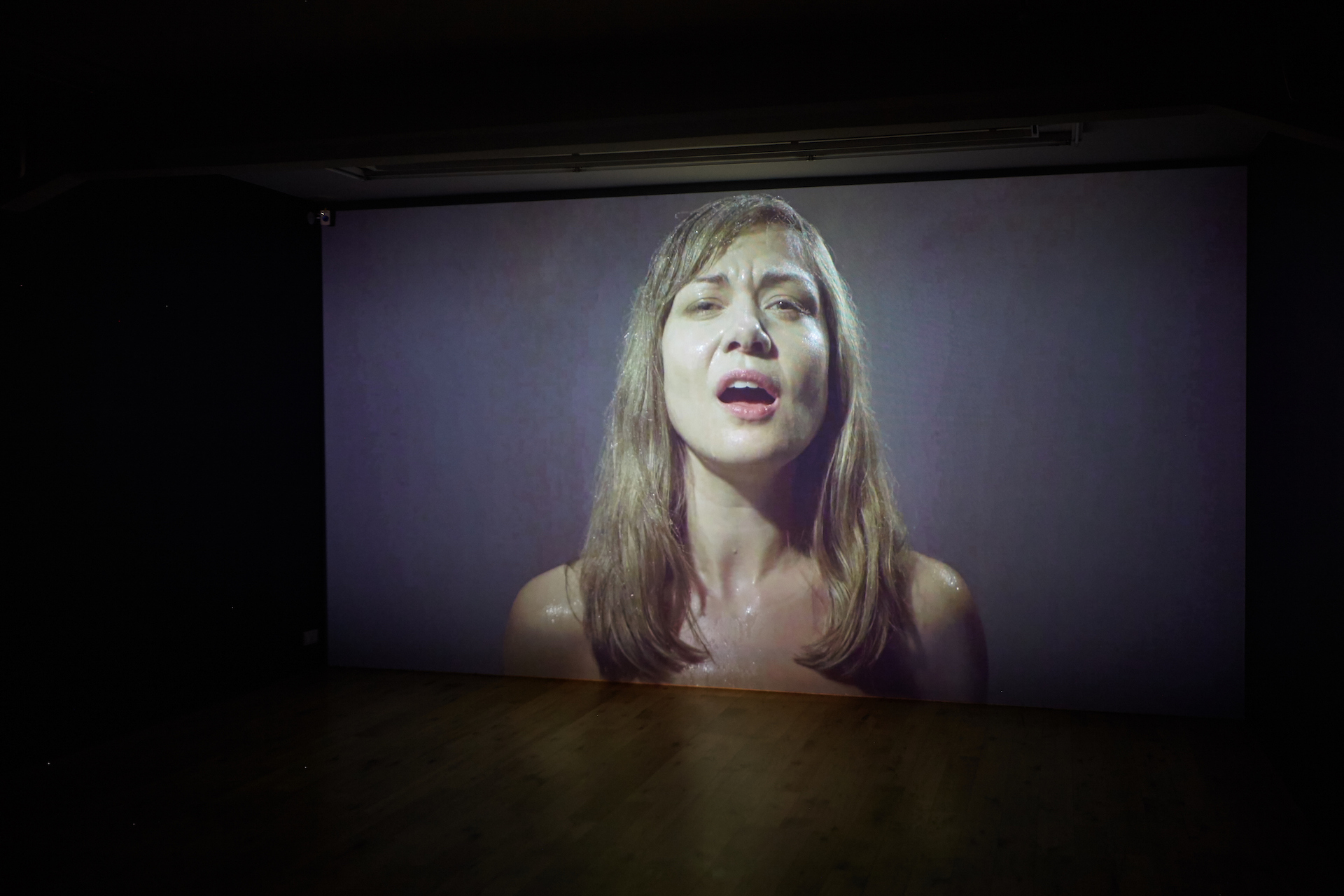 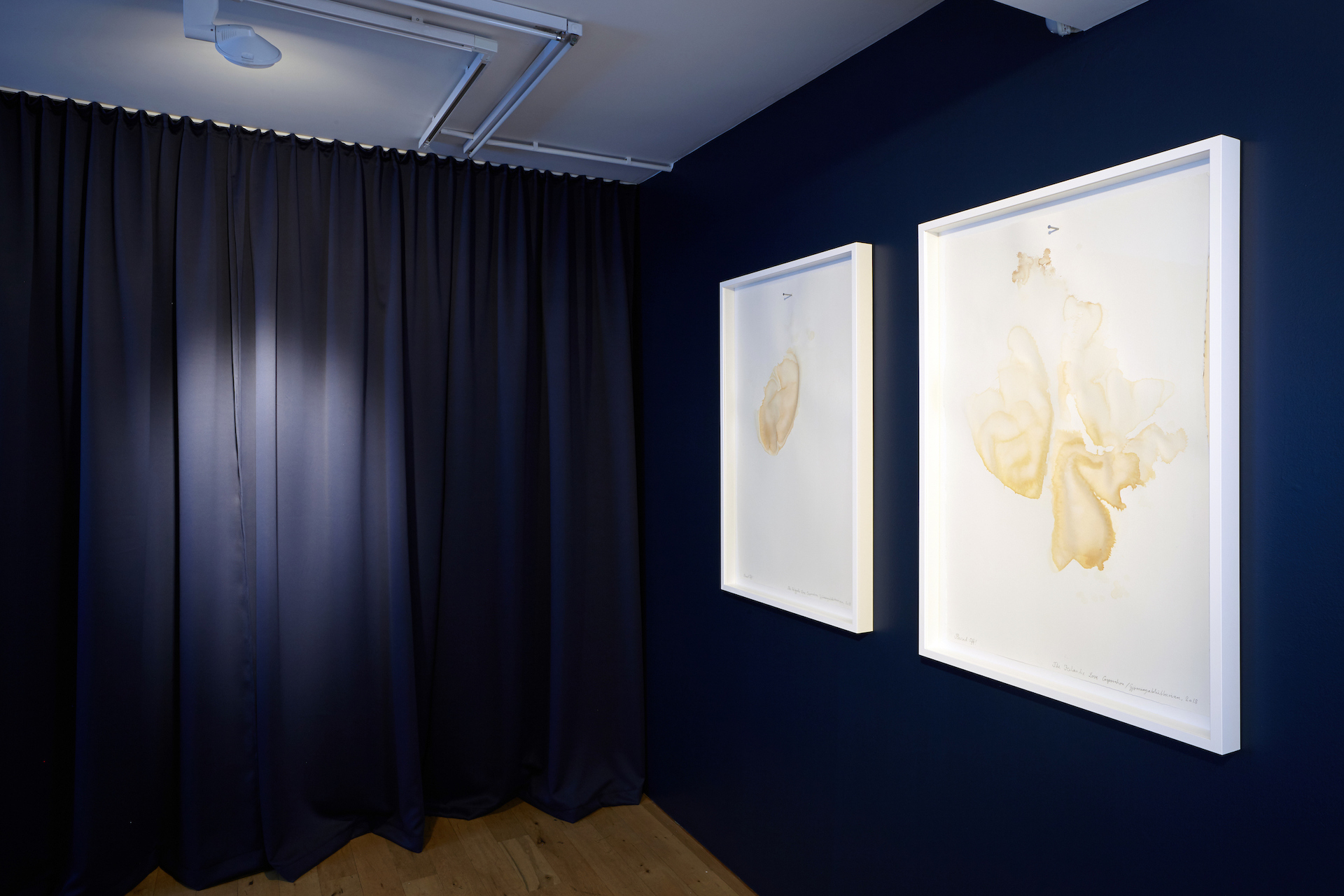 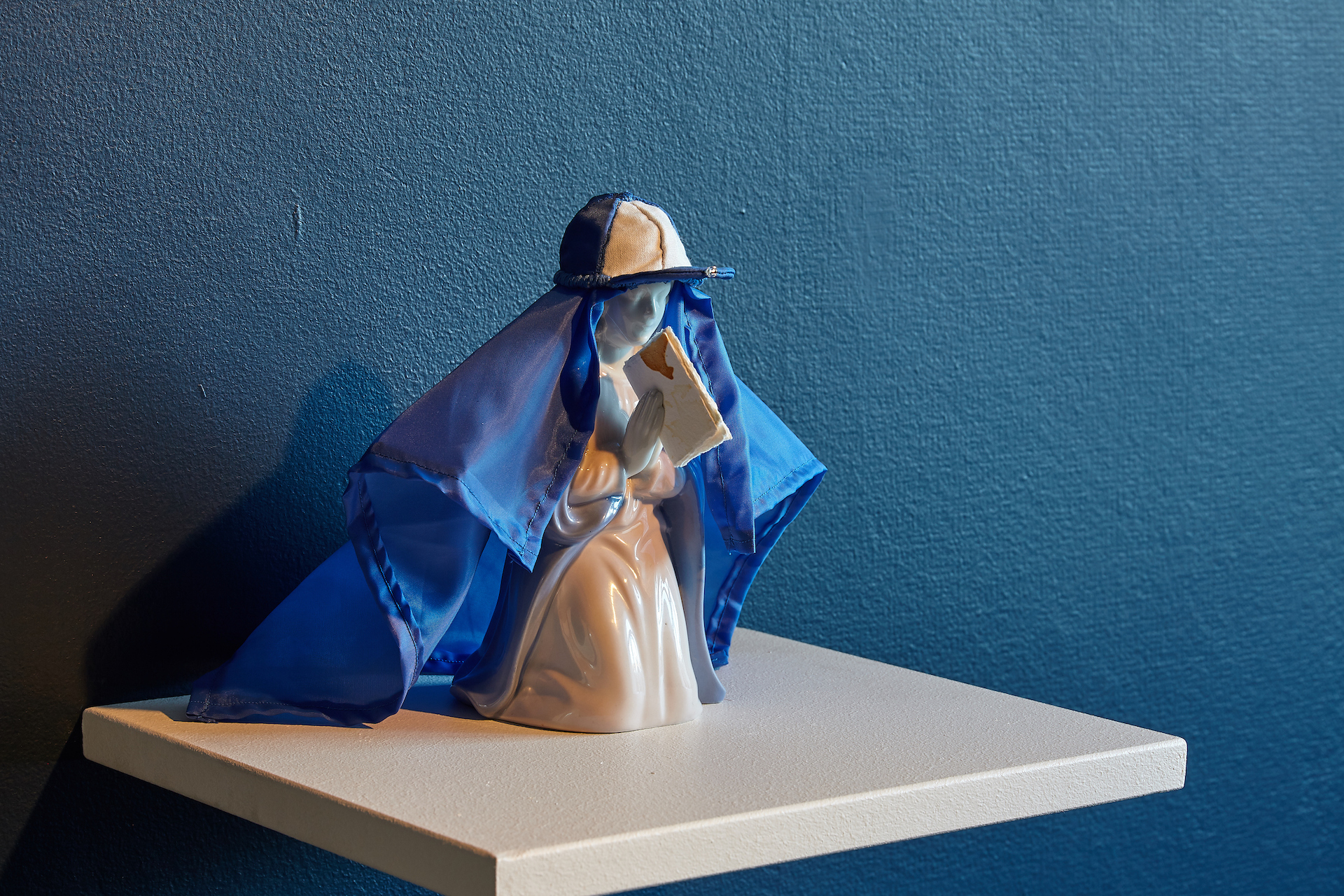 This parallelism between Mary and the vital fluid is presented in Aqua Maria, a video work showing a lyric singer who emerges from the darkness and sings a song entitled Aqua Maria, a remix by Ólafur Björn Ólafsson of Franz Schubert’s Ave Maria and the Sigvaldi Kaldalón’s version. To access the work we have to pass through thick curtains of the same intense and bright blue color of Mary’s veil. The curtains look like some sort of artificial waterfall: they are dense and heavy but made of threads, a delicate material which become stronger when weaved together, like water does when streams converge into larger and powerful rivers. The singer, Agnes Wästfelt, performing in the video sings passionately and water is sprayed over her, yet she does not react to the water, she accepts it as it soaks her wet whilst continuing to sing. This willpower she shows by pursuing her intent without getting distracted by what is happening around her and on her unveils a certain perseverance, a strength and a will to accomplish her duty no matter what. When acceptance segues into perseverance it mutates from being a value for a peaceful existence to a necessary quality to carry out a fight and an attempt to change our society.

Liquids are present in the show also within the series Pissed Off!, works made with urine. Urine, along with those other substances through which we expel unnecessary micro-elements, is culturally considered repulsive, in fact they smell bad and they affront our senses just by seeing them: they are something to be ashamed of. Nevertheless, these natural needs are necessary for the body to keep working properly and it is also thanks to them that we can achieve all the great things human beings have done and are proud of. By deciding to use urine as material for their pieces, the Icelandic Love Corporation is elevating the idea of urine from a mere despised element to an artistic tool. They seem to suggest a change in our perception of our bodies, again by reviewing our cultural heritage. Just like Mary accepted her destiny, we need to accept ourselves completely, embrace everything about our body, this constitutes a rebel act against centuries of prudery and self-disgust.

The textile work Consent, hung from the ceiling in the middle of the room where the Pissed Off! works are displayed, recalls the traditional feminine craft of weaving. Weaving has always been associated with women. The Cretan princess Ariadne helped Theseus to find his way out of the Minotaur’s labyrinth by using a ball of thread, Arachne was transformed into a spider because she challenged Athena in a weaving contest which she lost and was therefore transformed into a spider – and that’s why spiders weave their webs. Women in the past were in charge of weaving clothes, a domestic labor which alienated them from the real world, because outside the front door it started the men’s territory. But also, women would soon start to meet up to weave and knit together, an innocent act that allowed them to group and band together. This art piece is made by using wool and nylon tights, merging together tradition and the modernity, the neon colors of the piece and the use of tights mark their belonging to contemporary times but the technique recalls the traditional women’s duty. Women are mothers and weavers and both roles are connected to creation. 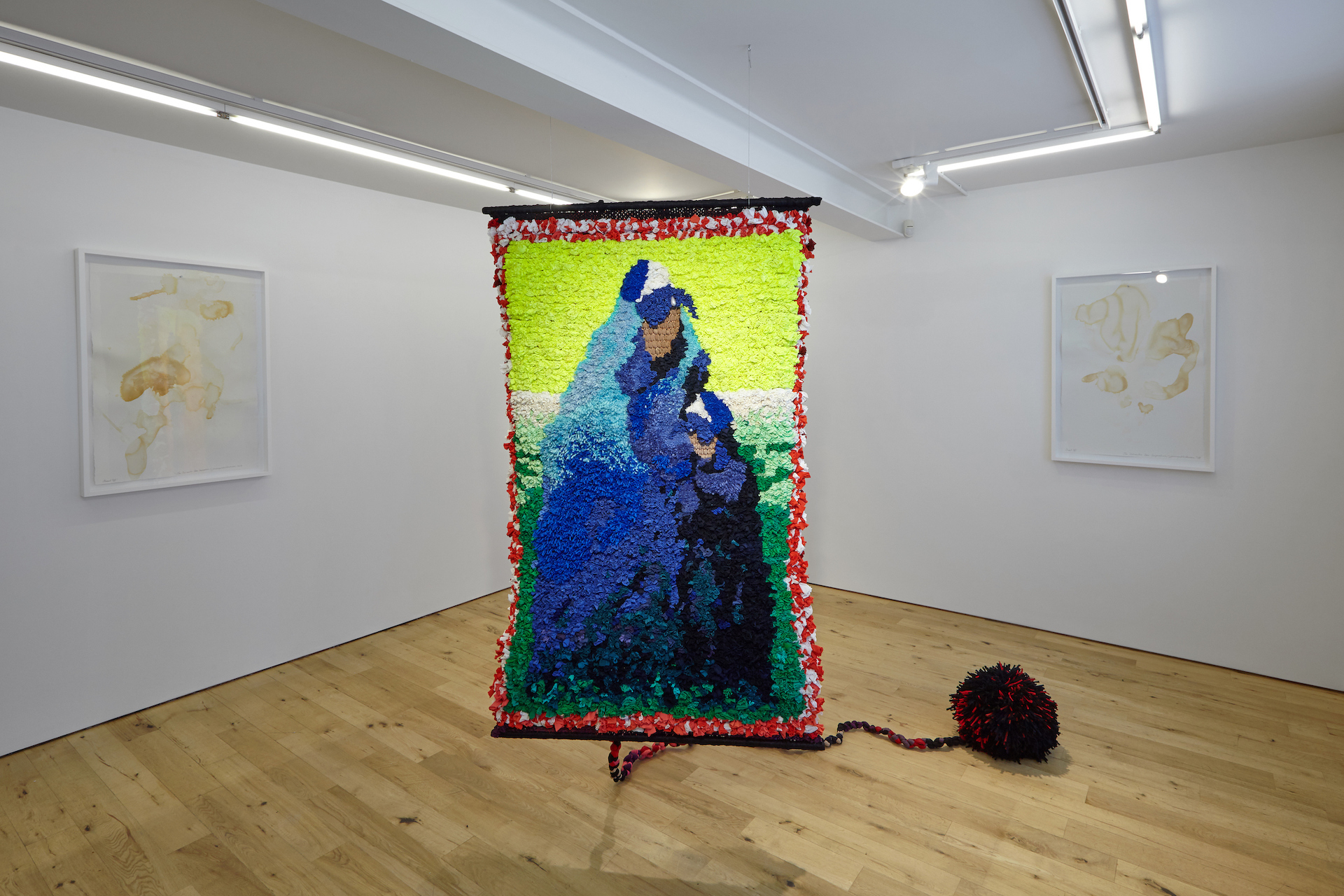 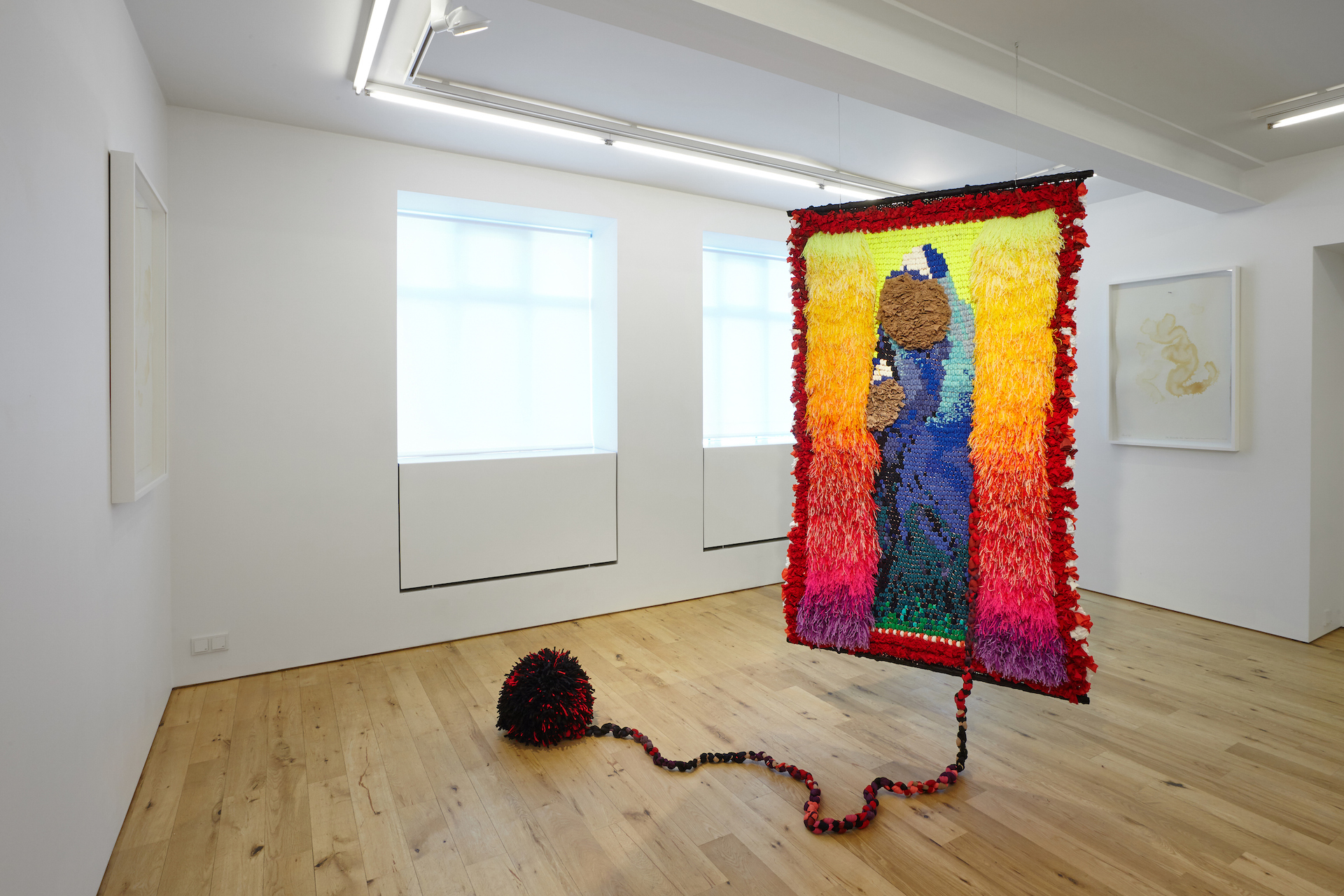 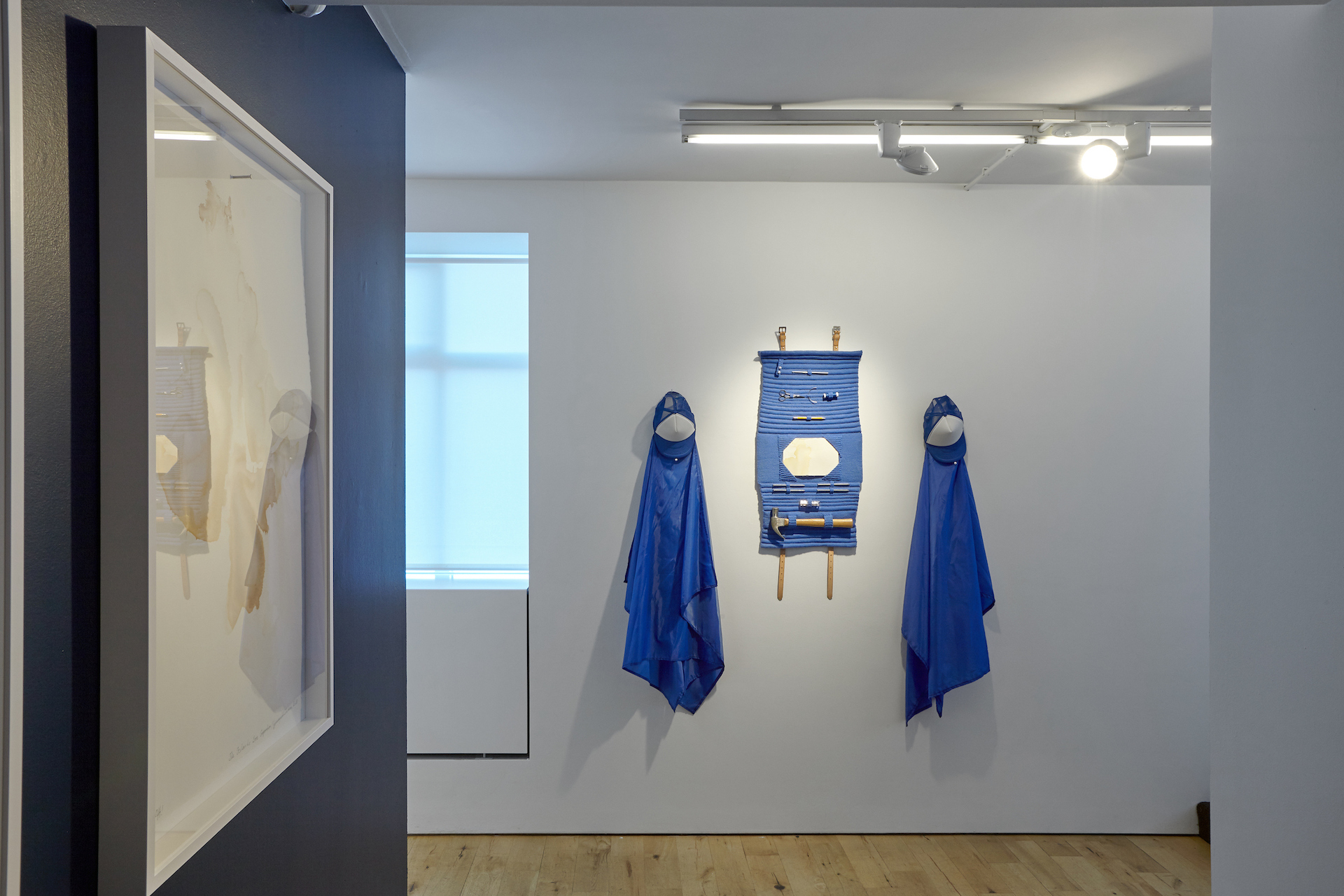 The theme of rebellion is the focal point of the whole show and it is clearly stated at the entrance of the gallery in the work Rebel Kit. The Rebel Kit contains tools which are metaphorically fundamental to be a rebel according to the Icelandic Love Corporation. The kit provides: two caps, a crochet hook, scissors, blue sewing thread, a pencil, a small edition of Pissed Off!, some nails, a hammer and a blue lipstick. This work contains references to all of the other works presented in the show, and brings them together into a conceptual pocket revolution, putting together elements from the feminine world, such as the lipstick, supplies for sewing, and elements connected with art and craft, such as the small watercolor, the pencil, the nails and the hammer – although these can be seen also as a reference to Jesus’s Crucifixion, a symbol of his suffering and of what Mary has to go through because of her acceptance.

This piece seems to shout out loud that being a woman is OK, that there is nothing wrong about wearing lipstick and sewing clothes, and there is nothing wrong about having those characteristics typically associated with women. The whole show seems to work towards awakening consciousness that in order to become rebels, women just need to embrace the way they are, no change is required but on the other hand awareness is: in order to be rebels we simply need to be conscious of our values and our power, because so often the main enemies of women are just women themselves, falling under the weight of the cultural heritage that taught them what is wrong and what is right, how women should be.

The Newest Testamen by the Icelandic Love Corporation is on show at Hverfisgallerí until Saturday the 2oth of March.