Making Folds in the Timeline 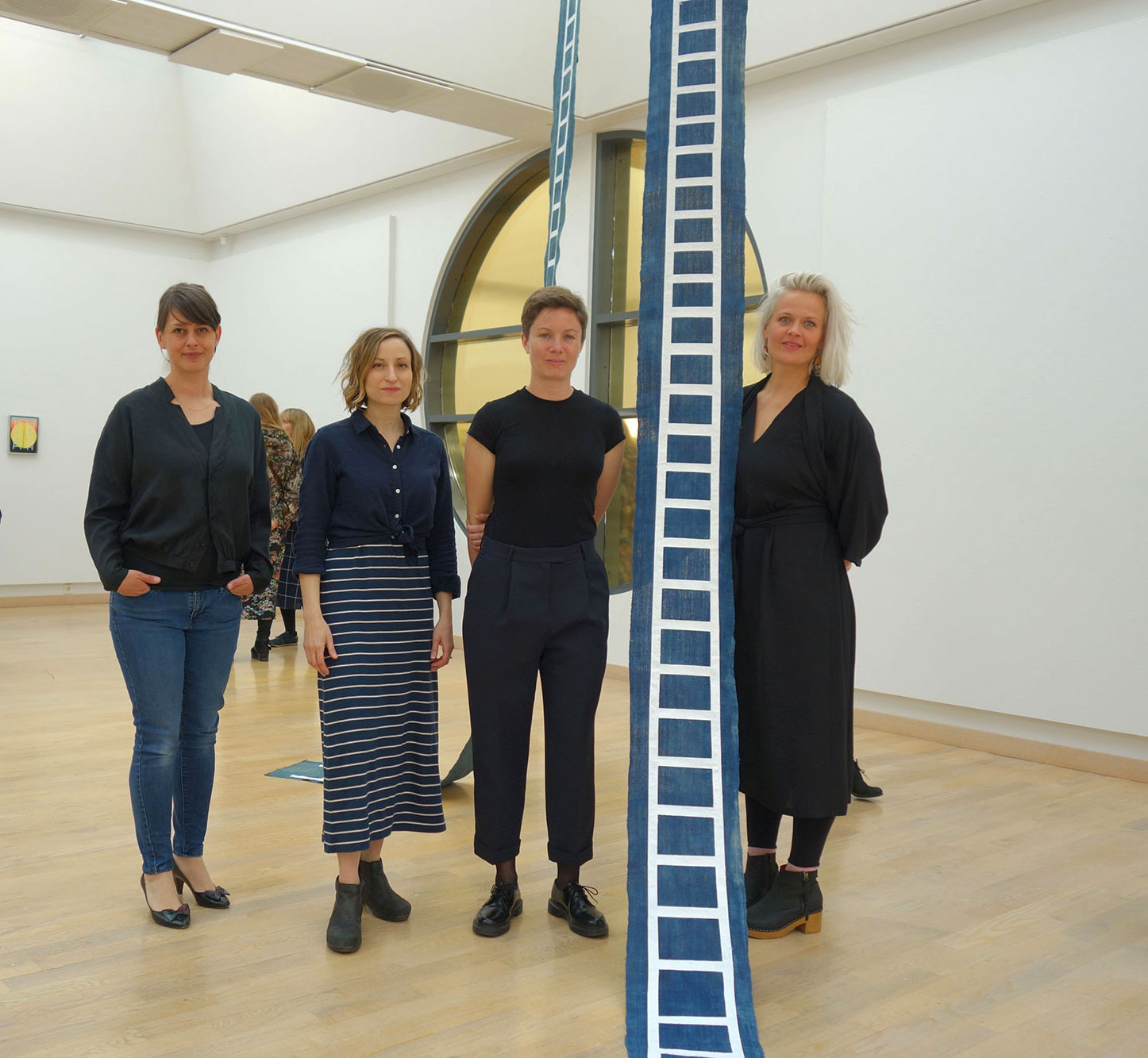 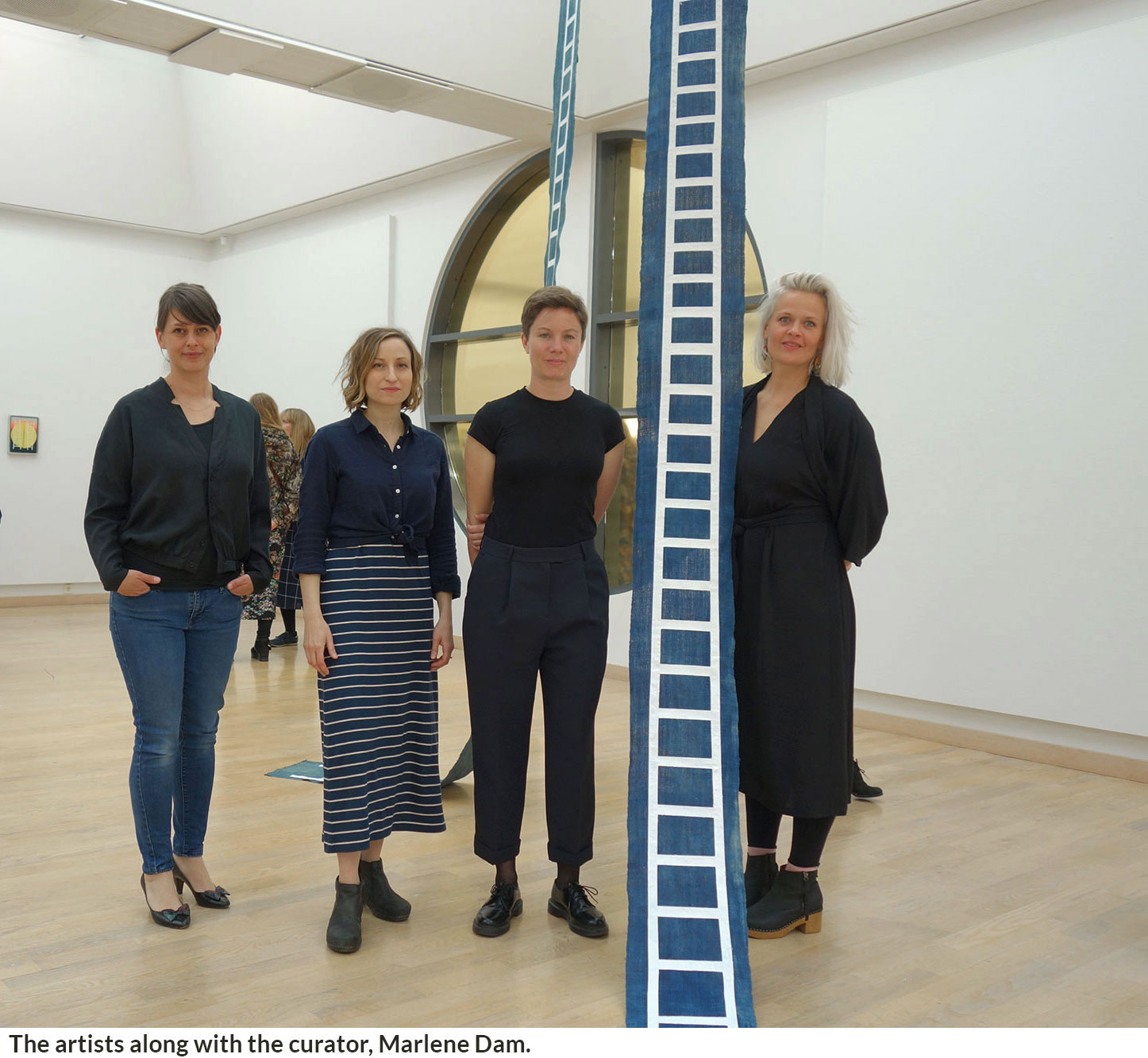 Making Folds in the Timeline

At Gerðarsafn Kópavogur Art Museum from June 3rd to August 20th a group show titled The In, With and Between Us / , með á will be on display. Curated by Malene Dam, from Denmark, the show features works by four different female artists, including Gerður Helgadóttir (1928-1975) after whom the museum is named. The exhibition leaves more questions open to interpretation than settled answers for the viewer. The open conversation between four women of different generations time and space across contexts including the role of the art museum in the story being told. Gerður’s work in the museum collection formed the cornerstone upon which the other artist’s turned.

Ragnheiður Gestsdóttir (1975), an Icelandic artist whose background in visual anthropology permeates her work, also uses it to question the very writing of history in the exhibition. After a residency in Beirut in 2016, Ragnheiður found an outlet for her questioning in the form of the Athenian marble column often found in Middle-Eastern and Mediterranean ruins. 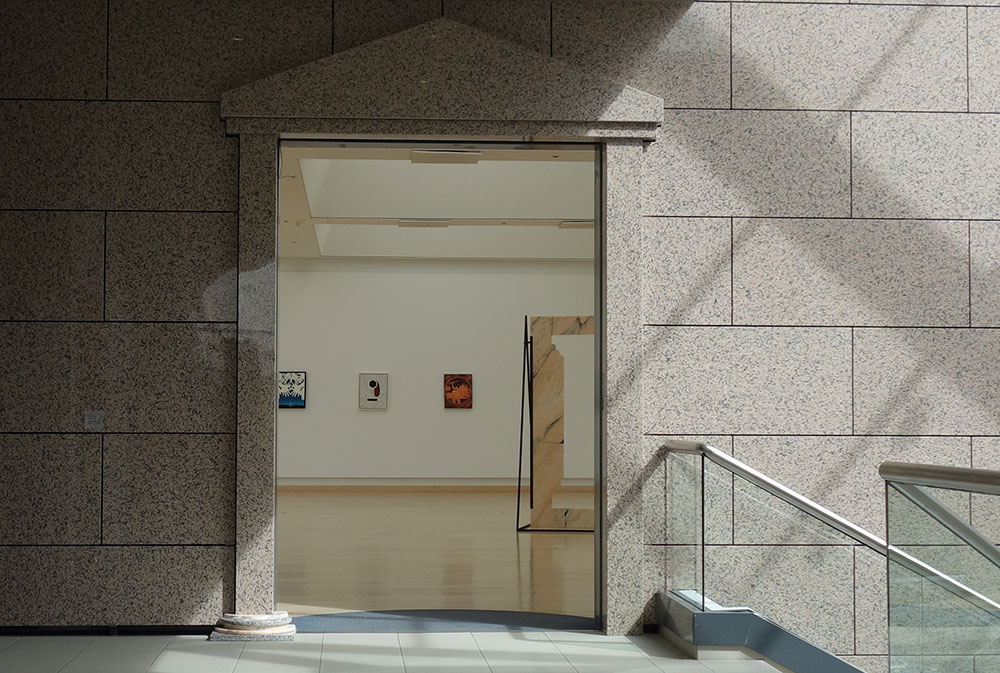 In Column, a large thin pink slab of marble holds an empty column-shaped center, symbolizing at once the material’s permanence, yet fragility, with its many visible breaking lines from their time spent in transit. The column’s outline asks, “What doesn’t get a voice in our history?” as the material has been so shaped by manufacturing. The column echoes the column shapes to be found in the museum’s architecture, which Ragnheiður embellishes with pieces of the same pink marble from Beirut. 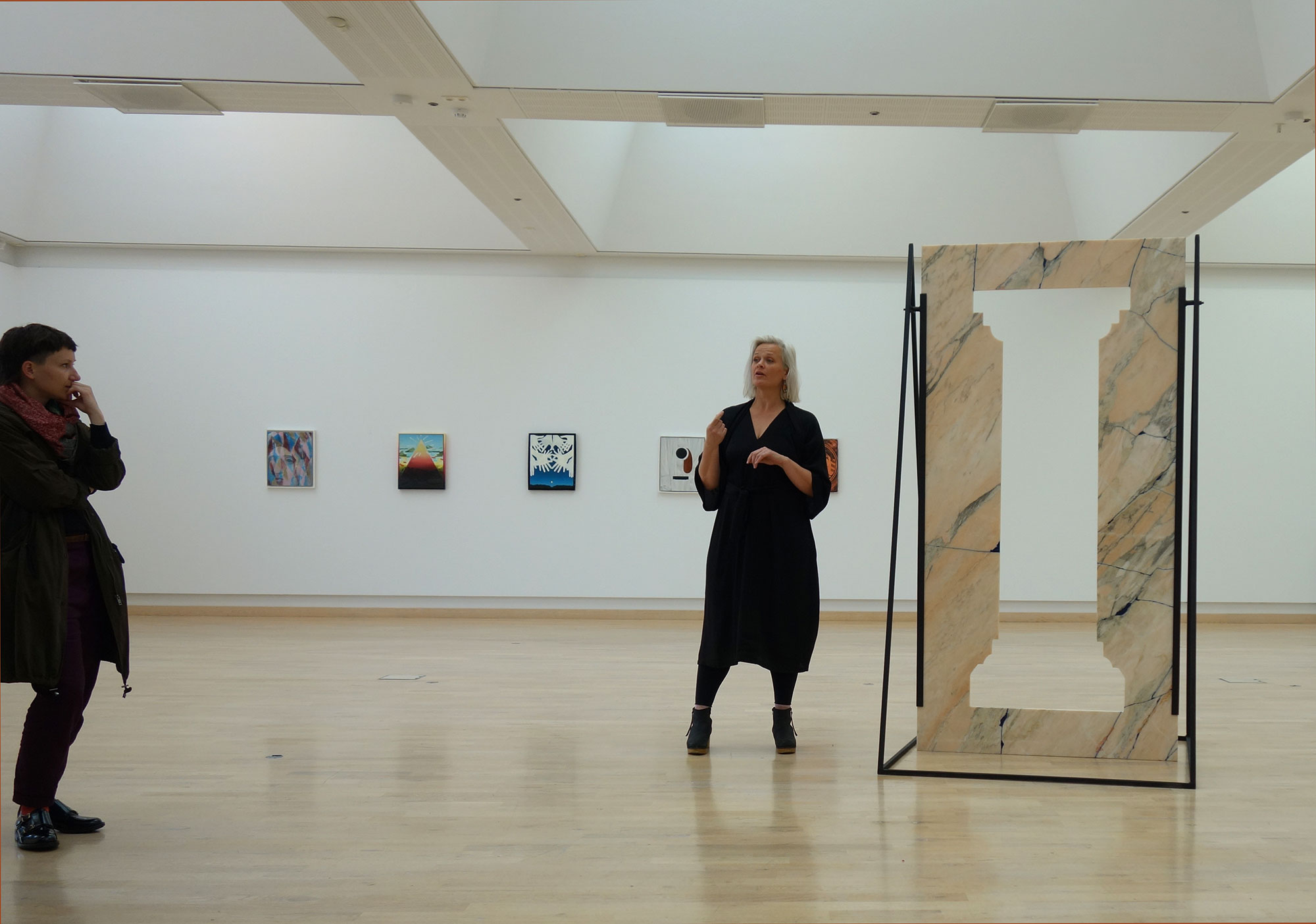 In the hallway between the two exhibition rooms at Gerðarsafn, which is usually passable, Ragnheiður has installed a rippling red carpet, the perfect shape to reminisce the malleability of the timeline. 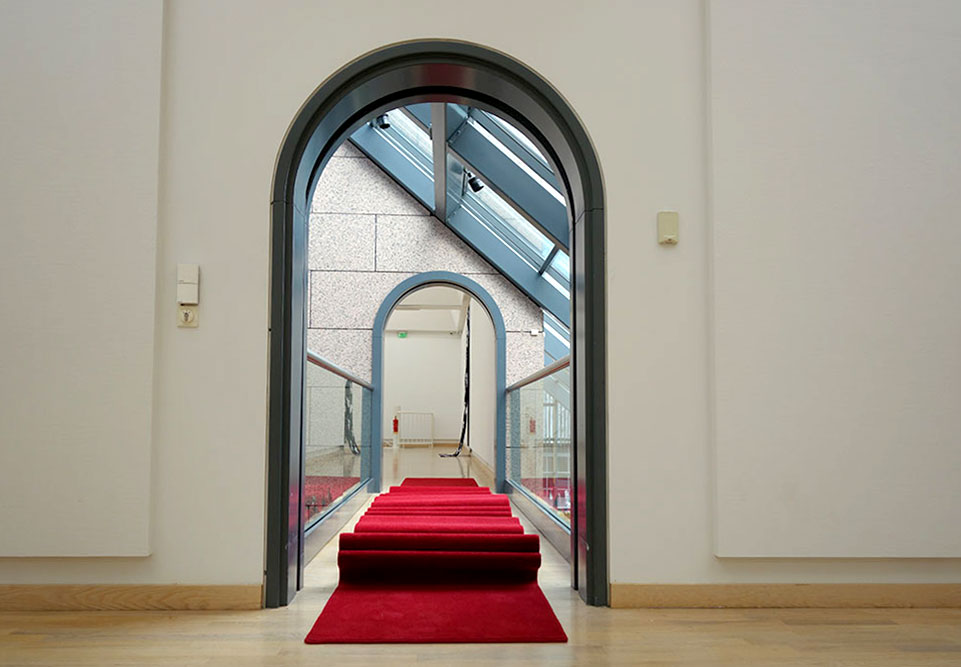 She approaches Gerður´s work as a fellow female artist in art history. Do we have to reshuffle the timeline to get closer to the truth? Like the red carpet, now a Hollywood symbol, it is also a construction laid down by a hierarchy.

Cleverly and humorously, the red carpet forces us to take the long way around the exhibition space, backtracking from where we came. Time which was once a line, is now broken, and perhaps for the better as reshuffling the layers brings new perspectives to light. 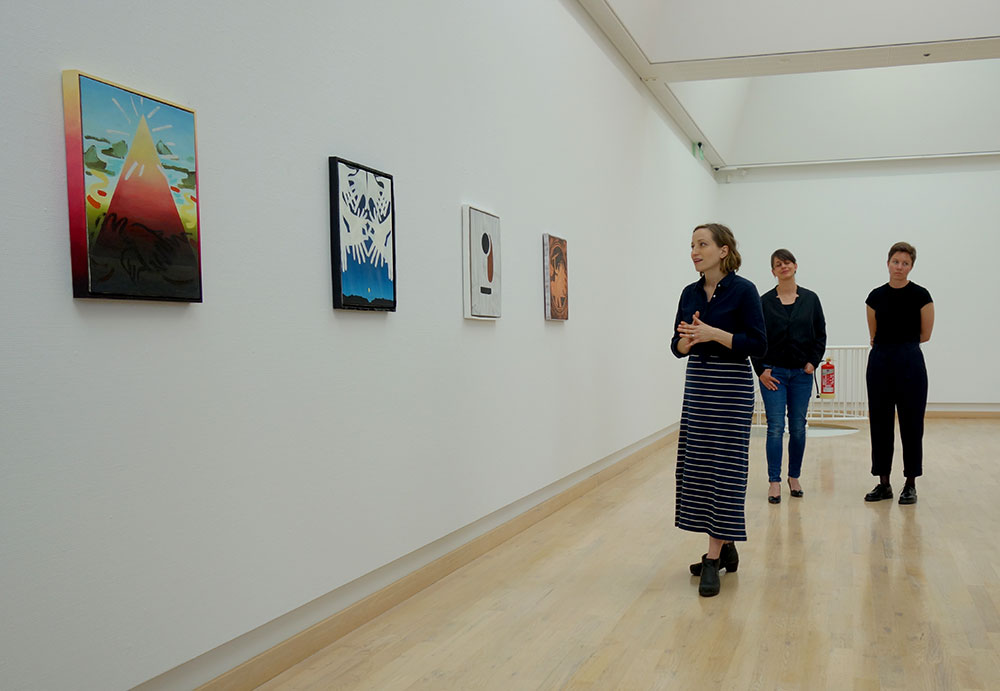 Emily Weiner (1981), an American painter based in Brooklyn, has placed a hanging textile ladder from the ceiling. With an allusion to ‘breaking through the glass ceiling,’ the ladder is seemingly a connection point with which you can traverse between the earthly and the divine. It also likewise rests somewhere in between painting and sculpture and also becomes transition points between different time periods and context within the exhibition. 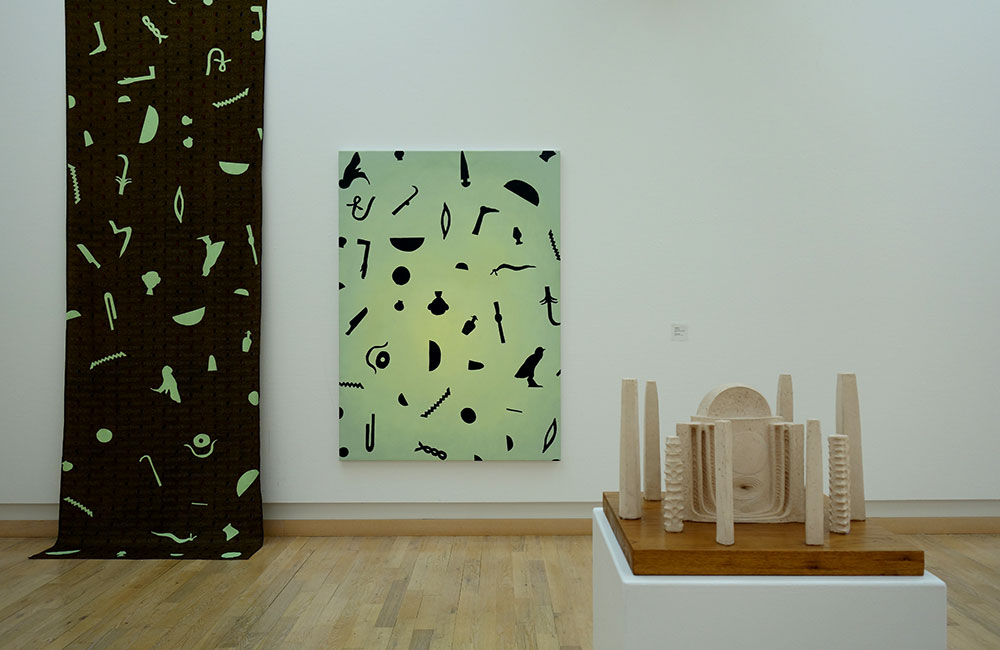 Emily Wiener´s Glyphs, 2017, next to a sculptural piece by Gerður Helgadóttir.

In Weiner’s oil paintings, symbols that have been extracted from larger conversations in different cultures throughout history are placed in a new context. She uses many symbols often used in modern culture which are placed on the same plane across mediums, but everyone can relate to these images as they are universal/timeless images both specific and personal. 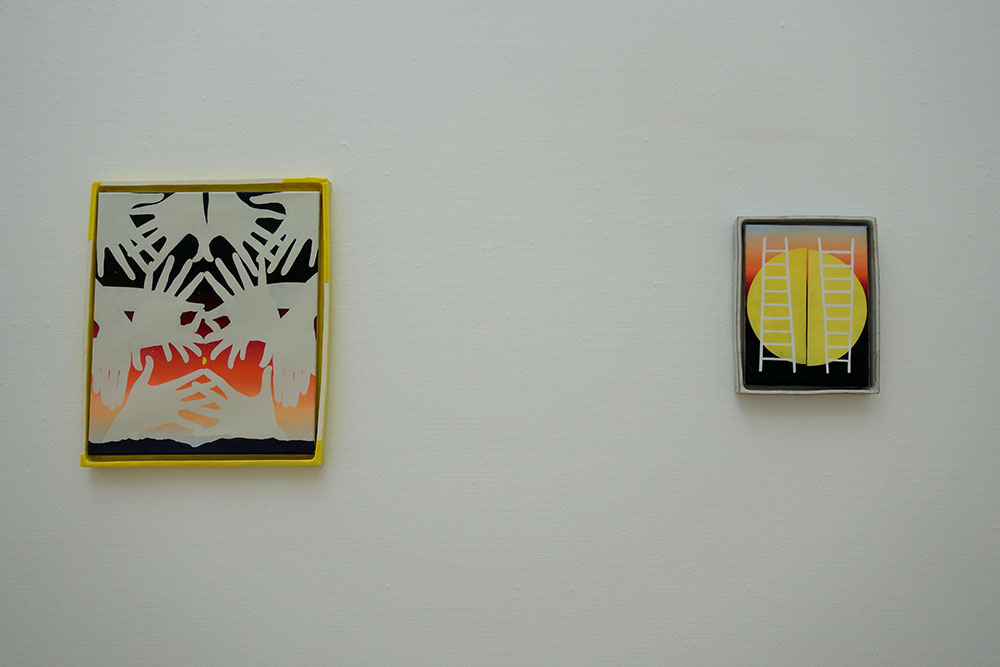 They allude to a certain spiritualism with moons, half moons, triangles, the outlines of hands, planets, pyramids- the paintings collapse these symbols in the timeline of linearity to reiterate just how universal they are and how eligible visual language can be. The paintings converse with Gerður´s motifs and interests in Egyptian art, geometry, and Spiritualist teachings. 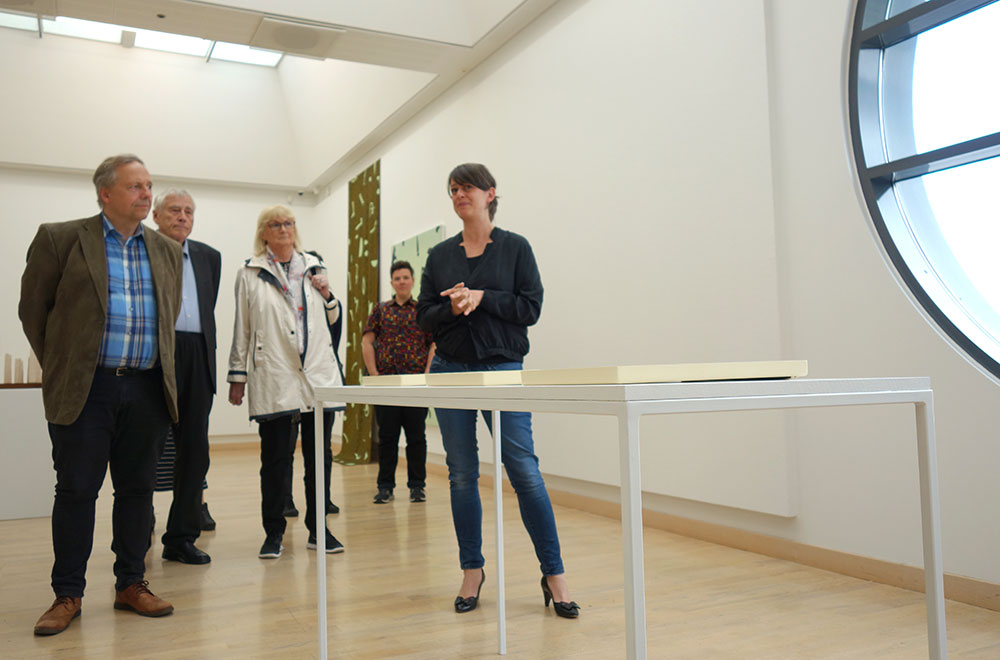 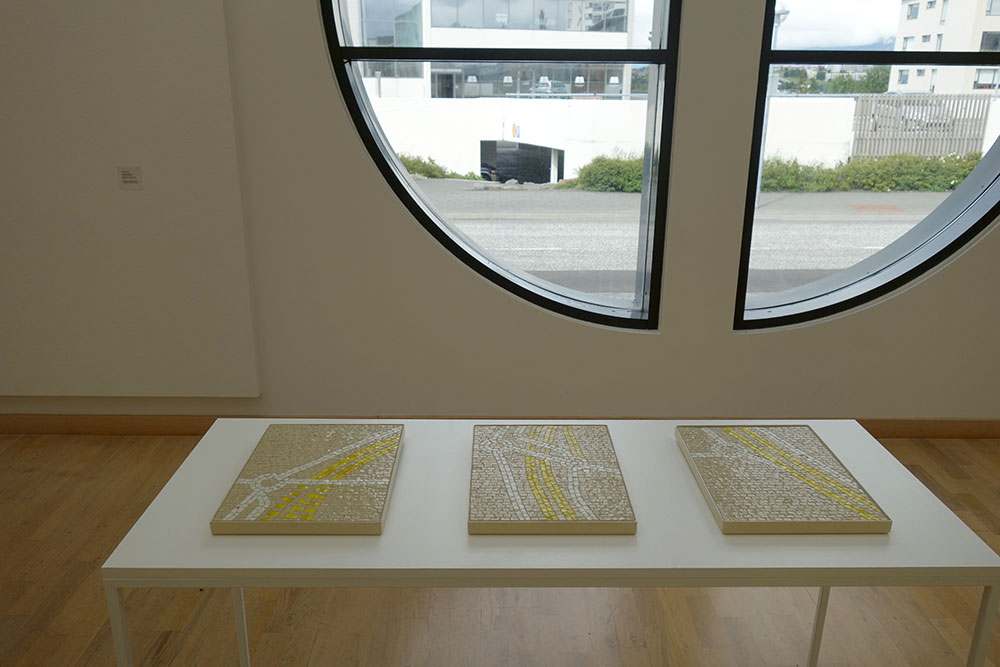 Theresa Himmer’s (1976) approach to Gerður´s legacy is through mosaics in the way they relate to spaces. Kópavogur was Gerður´s returning place between travels. Himmer´s mosaics map the surrounding area and were built by the next generation of brothers who manufactured Gerður’s mosaics. In a series of photographs, the interior of Elín Pálmadóttir´s apartment (now 90 years old), a close friend of Gerður’s, feature intimate artworks and gifts from Gerður. In this way the architecture of the personal and the public are merged into a narrative in which memory is carried. 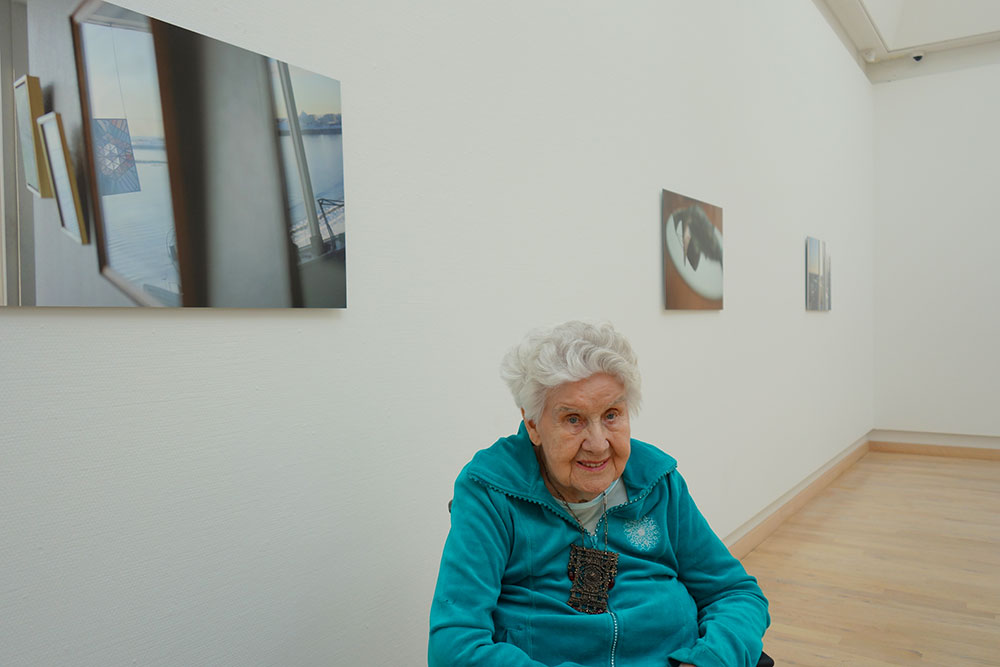 Elín Pálmadóttir, journalist and the writer of Gerður’s biography was a close friend of Gerður Helgadóttir. She is pictured here in front of Theresa Himmer´s photographic series, The Space of Friendship (Elín), 1-5, 2017.

The In, With and Between Us captures the ways in which contemporary art does what it does best, by constellating the present into an open relationship with the past and the future- everything becomes present and put on the table. The exhibition had two prior incarnations in 2011, when the three artists met at the School of Visual Arts in New York City, and later in a group exhibition in 2015 at the Soloway gallery in Brooklyn, New York titled Speak Nearby. Each artist seems to create a node across a constellation of meanings to be found in which the personal becomes the political- it is this inversion that has the ability to reshuffle the timeline to see how the narrative is preserved, as well as the open relationships between materials that carry the body of time. 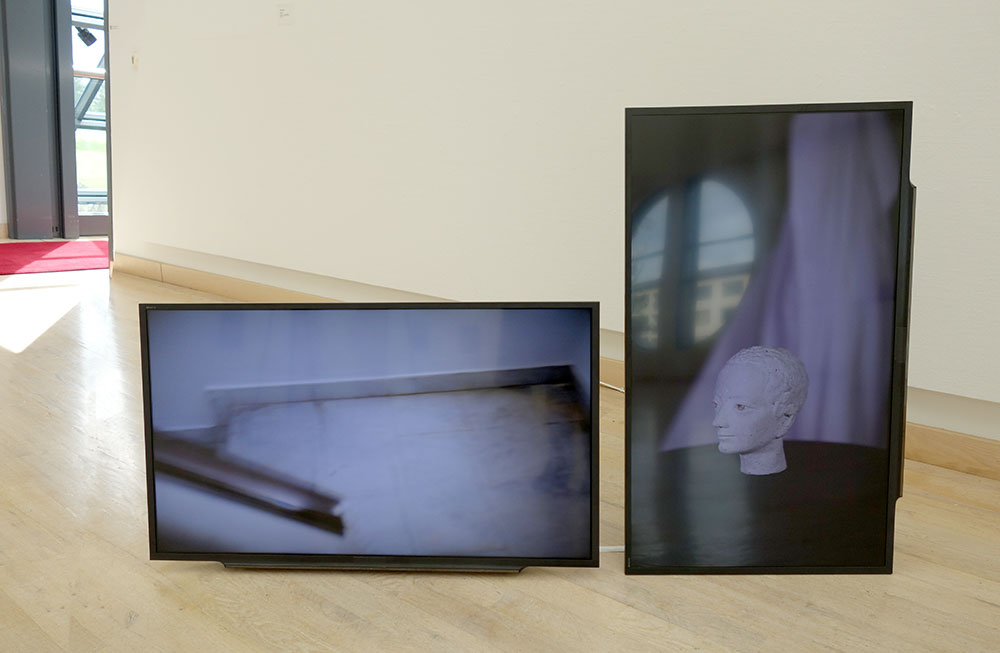 The exhibition brings to mind Gilles Deleuze´s notion of the fold in Baroque architecture which he uses to expound on the idea of infinite process, an open continuation of the work to infinity, instead of to a standstill (or glass ceiling.) Deleuze´s fold, like the multitude of nodes in Baroque architecture, affects material in its multitude of possible forms, constantly introducing a new variable on which to produce an expression. The artists in the exhibition have enacted a fold, as intricate as one of the Baroque, amongst materials and locations and years. From the marble column of Ragnheiður to the classical busts of Gerður, to the half-moons in the paintings of Weiner to the architecture of Gerðarsafn itself, from the intimate apartment of Gerður´s close friend, to the suburban mapping of Kópavogur.