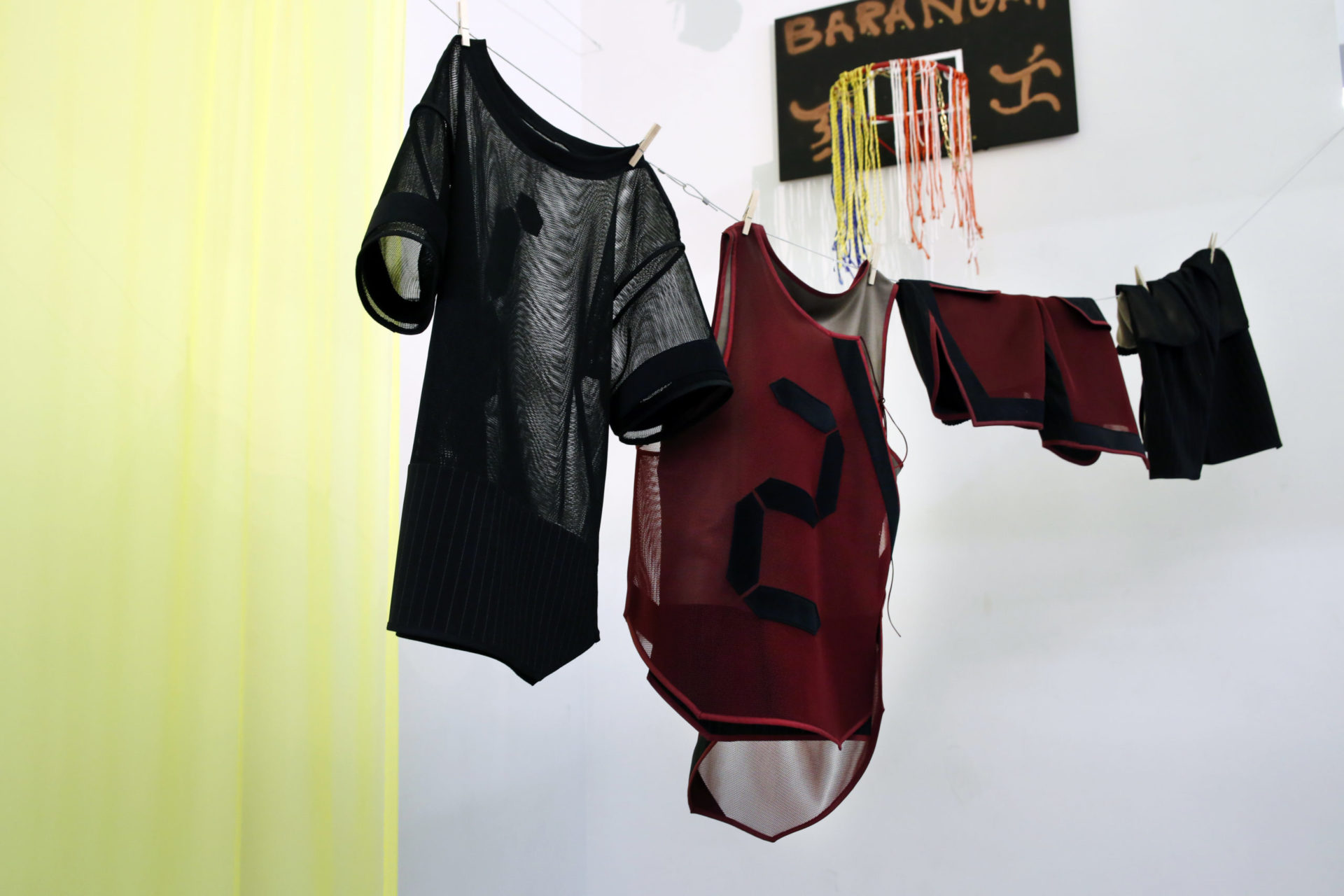 In the exhibition Lucky Me? the art-collective Lucky 3, consisting of Darren Mark, Dýrfinna Benita Basalan, and Melanie Ubaldo, draws to attention their experiences that fall in between identification with- and marginalization of the Filipino community and culture. They invite, as they say in the catalogue, a mostly white audience (including me), to experience a reconstructed nostalgia that is not of the audience’s own—while serving as a celebration of the Filipino community in Iceland.

Installations, videos, clothes, and karaoke are all parts of the engrossing whole that makes up the cultural reminiscence that Lucky Me? consists of. Situated in the white and cold space of Kling & Bang in Marshallhús, and taking place in the darkest days of winter; the exhibition is warm, welcoming, and personal while still being true to one of its core messages of displacement, and mixed feelings of self-identity. The experience of the contrasting elements were inviting and thought-provoking simultaneously. Which left me with the feeling of political awareness of the multicultural reality that we inhabit today in a good way. That is, the cultural breadth of a society is a gift worth appreciating, within an artistic context as well as outside of it.

The first room of the exhibition displays a kind of street imagination; a basketball court, punching bag, and sportswear hanging as if it drying after a wash. The space showcasing clothes and installations by Darren Mark instantly pulled me out of the Icelandic snowstorm raging outside. Where it’s practically impossible to enjoy basketball outdoors, into a context that’s warm and where the worries of daily life are completely different. It set the mood, a soft reminder that I was there as a viewer to let someone else influence me with their vision of what life entails. 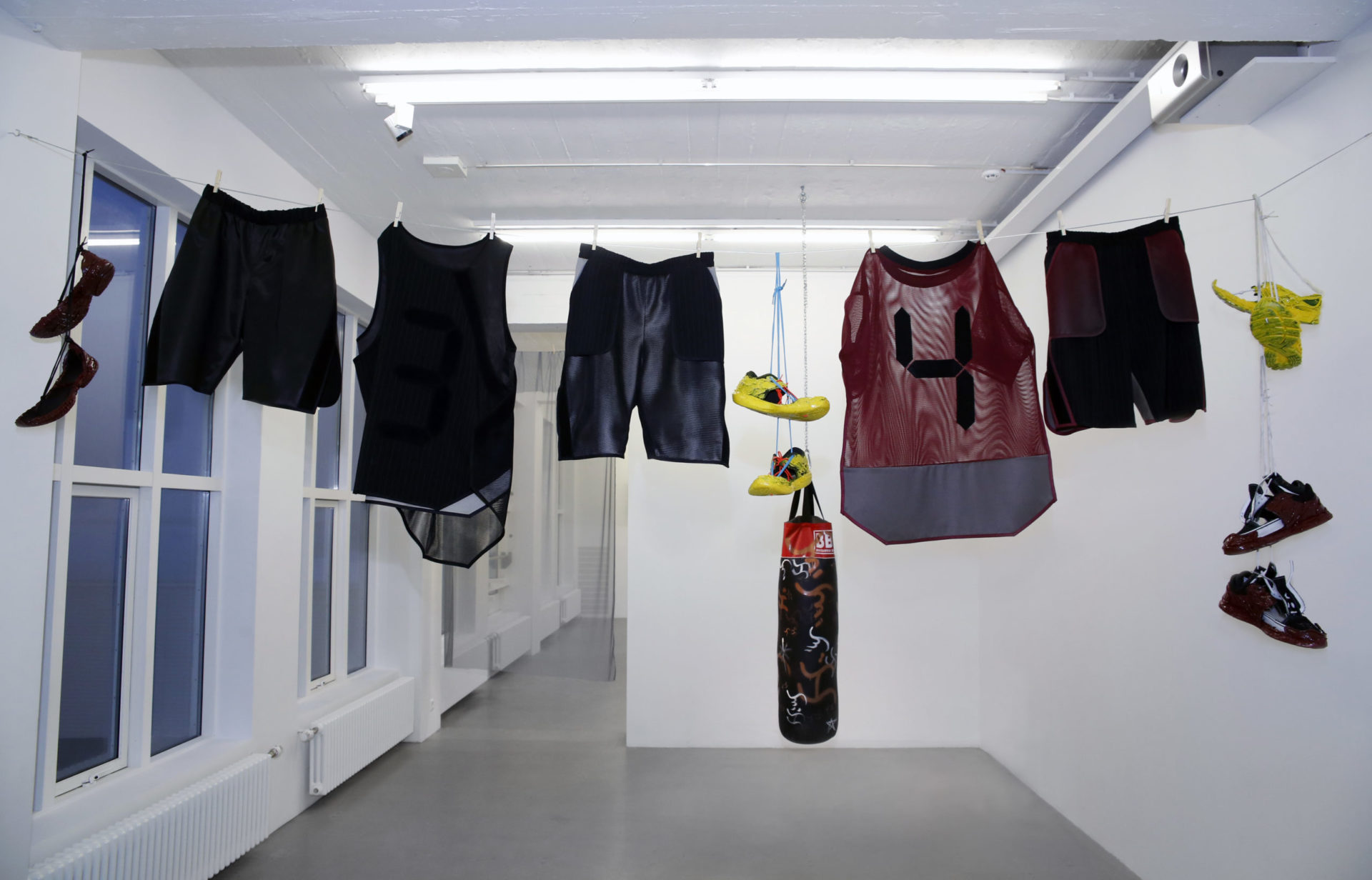 The reminiscence continued in the next room but, was neither soft nor pleasant. A brick wall covered with broken glass met me and behind it a video of a flood—a most likely devastating flood—followed by children violently dancing and inmates following a choreographed routine. Confusion.

The brick wall almost barring entry while being curiously intriguing. In an interview with Menningin Melanie Ubaldo said that the brick wall represented a common sight in the Philippines, where they use broken glass for security against burglary.[1]

The wall could be seen as protecting the small “store” installed inside the gallery. The small „store“ functions as a tribute to a concept called sari-sari, a type of store that usually has for sale a variety of single-use items, such as soap or food, and sporting familiar brands such as Head & Shoulders, Nescafé and Palmolive. Thus, this struck me as a reminder of the unequivocal effect of mass consumer culture and how vastly the effects of it reaches, but at the same time it gave the sari-sari a faintly familiar air to it. On display in the sari-sari was the popular Filipino noodle brand Lucky Me! which the exhibition derives its name from. Lucky Me? is an almost ironic or cynical twist to the name of the noodle brand that brought up in me deep questions about self-identity, and belonging in the light of racism. 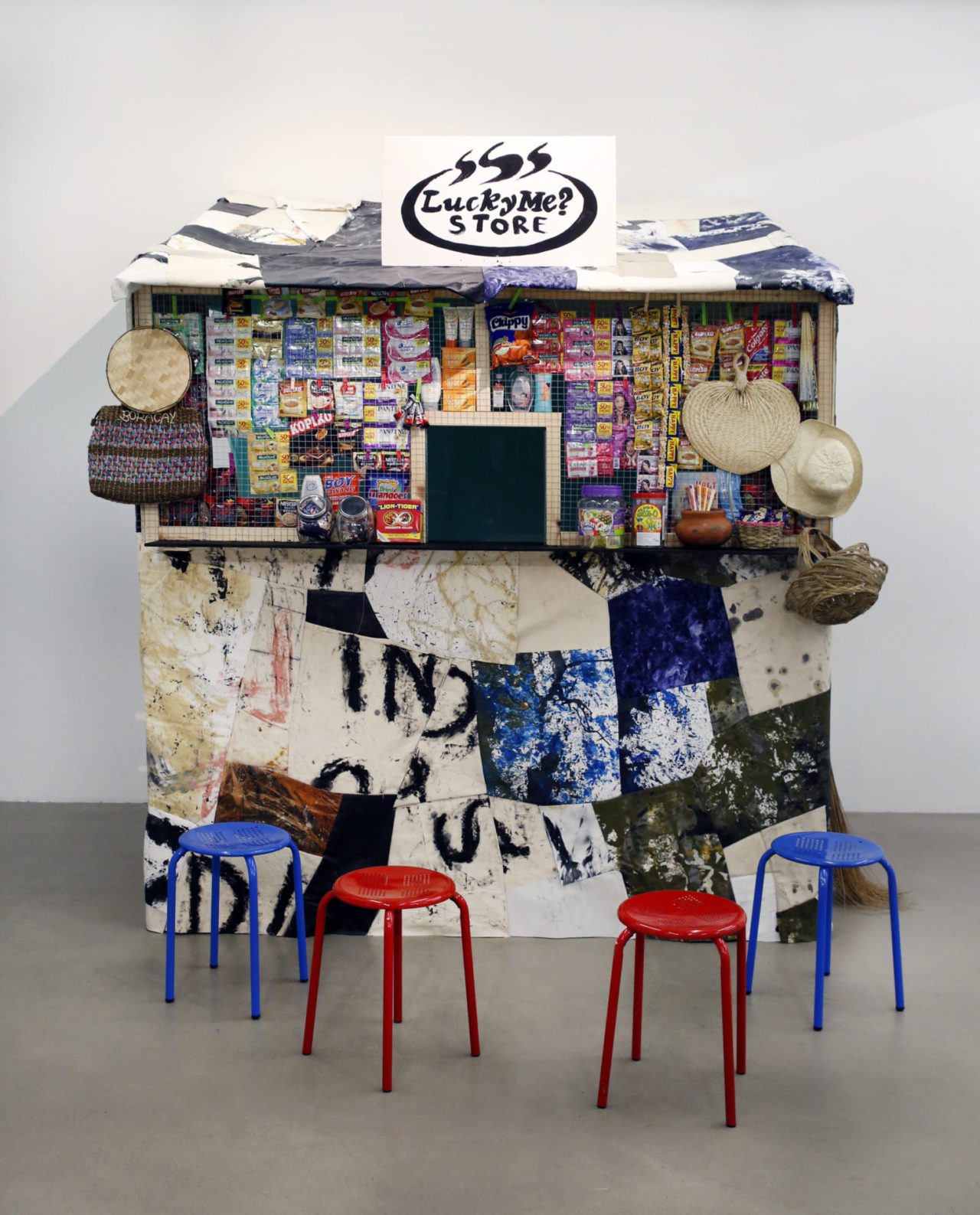 On the last wall, two artworks were displayed side by side. A small screen, situated opposite to the other screen in the room, showing a Filipino family, in a typical Icelandic house, eating dinner, and chatting sometime around Christmas. A casual scene which was relaxing to watch and listen to while not understanding the language while being in stark contrast to the active, and tragic scene on the other side of the room. Next to the family eating dinner was a big fan. Painted with a picture of what might express a feeling, probably not describable in words, of plants growing brutally out of a bleeding corpse lying comically with its tongue out to the side. Vile yet comic, the picture on the fan struck me with discomfort that most likely was intentional.

Karaoke, the crown jewel in the last room, served as a great reminder of playtime. Put on a song of your choice and enjoy it. I personally chose Heart of Glass, sang out of tune and enjoyed the hell out of it. In the room with karaoke was a sofa wrapped in plastic, not very welcoming and a big golden altar made of foam spray and candles, looking spectacularly fancy from afar while not so, up close. 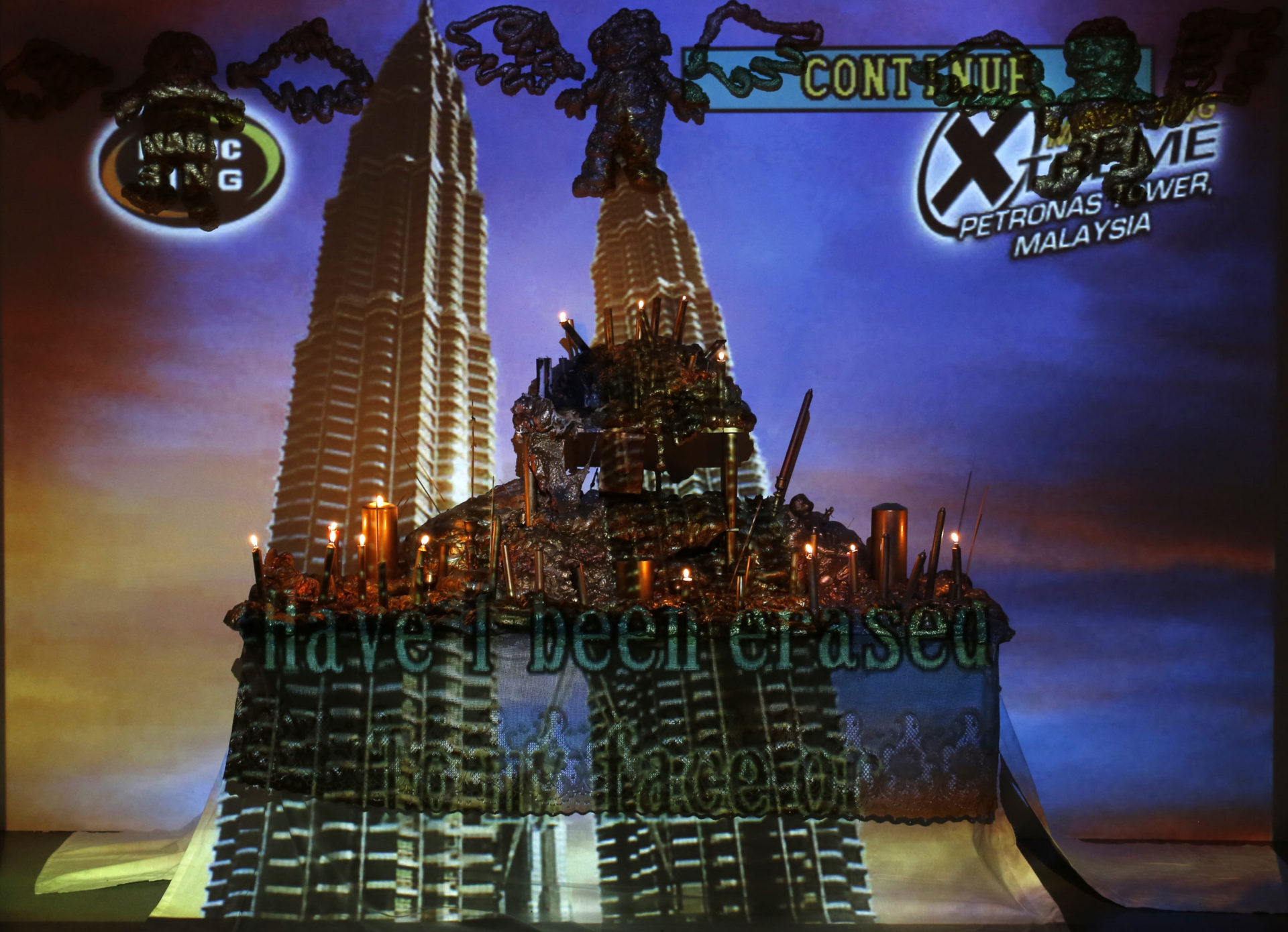 The installations, by Lucky 3, complement each other to bring the audience into a new group-perspective, one that is not readily available for many members of the audience. The artistic expression of culture in this personal exhibition, therefore, becomes a vulnerable practice that can be felt and almost touched. In the catalogue, Lucky 3 expresses their hopes that the exhibition will be a learning experience, which for me it without a doubt was.

Pictures courtesy of Kling & Bang and the artists.