What Do You Hear When You Eat Chocolate 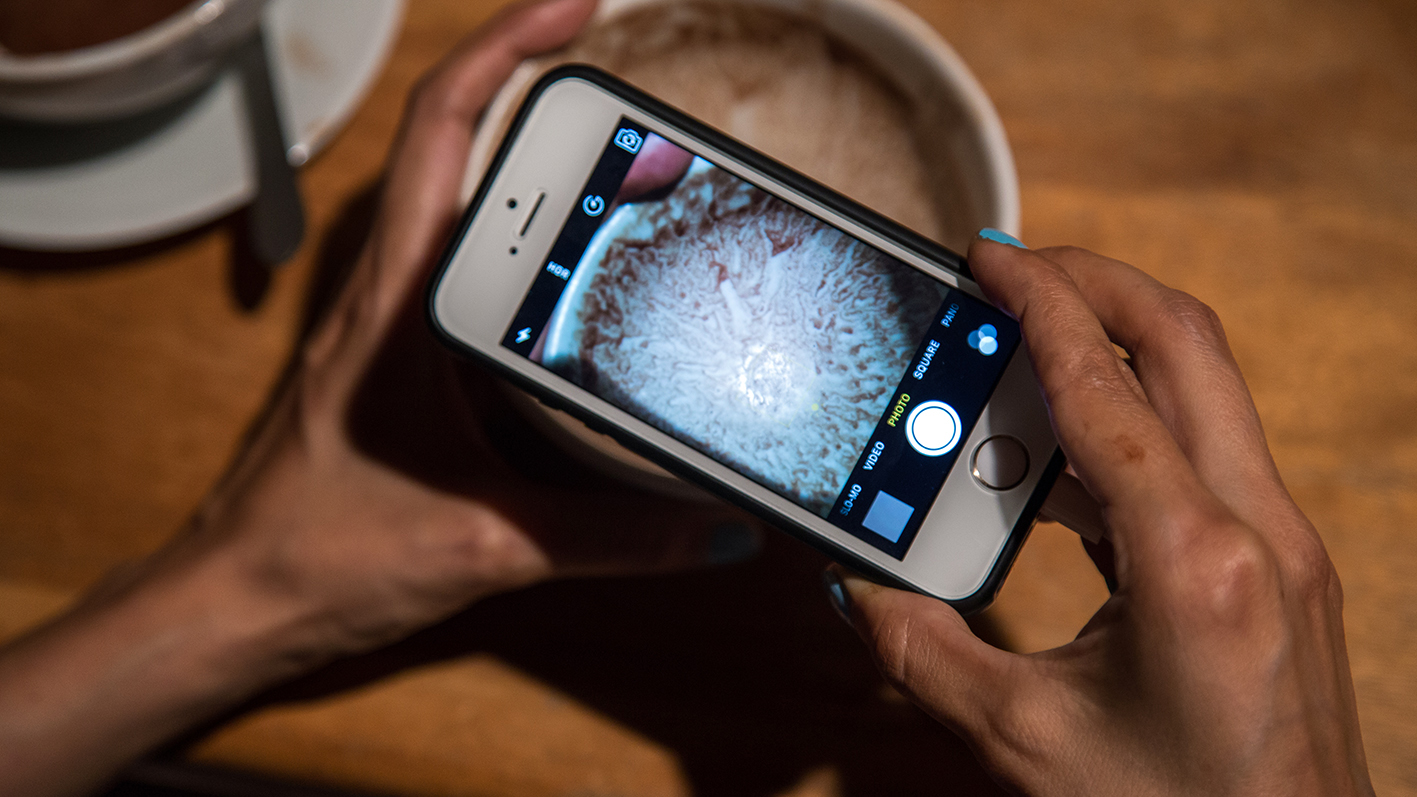 What Do You Hear When You Eat Chocolate

„Hot chocolate will leave the necessary stains for images to turn into visions and conversation. If the Cacao Allows it***“

„This Rabbit Looks to the Left“ is a performance piece by Luisa Ungar and Milena Bonilla that has taken place between 2014 and 2016. The performance is centred around the reading of chocolate, which like tea or coffee, leaves traces inside a cup that can be deciphered for clues about the future. For each reading, the participants of the performances have been invited to take a sip of the chocolate, so that their futures may be implicated in the reading. Each subject drinks from the cup, which is moved counter clockwise in 7 circles. The cup is then turned upside down to dry. 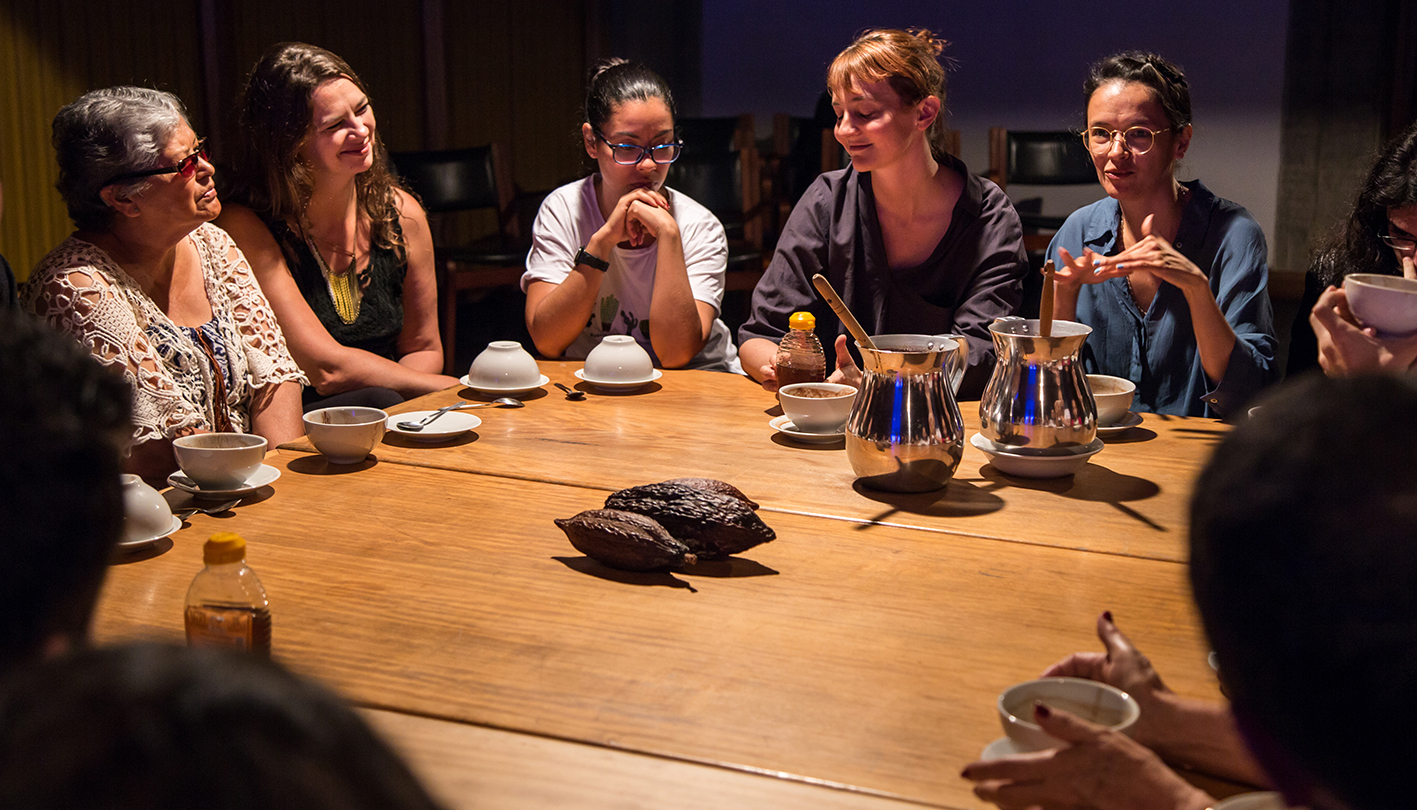 Now to read a cup of chocolate is a gesture that informs at least two conceptual movements: on the one hand it is a way to reinstate the original ritual function associated with the history of chocolate. On the other hand, it is also a nod to the cult-like trends of New Age self-improvement associated with modern-day consumer culture. As its ideological construct is to support any form of magical thinking the consumer may feel compelled to act, fortune telling is therefore another layer of product fetishism that may be associated with commodities such as chocolate.

In Kunstverein Amsterdam, Luisa Ungar and Milena Bonilla give a short introduction about the history of chocolate before the ritual of deduction begins: its origins as ritual paraphernalia within the religious and economic structure of the Aztecs. And then its travels to Europe, where alienated from any context other than bourgeois comforts and daily impulses, chocolate has become one star within a constellation of modern-day consumer habits. Forming a mild addiction, the consumption of chocolate in Europe is accompanied by the sporadic necessity of restocking supplies from sources of a different climate. From a psychological point of view, the origins of these commodities is untraceable, as there seems to be no tangible way to establish a relation between cause and effect when it comes to consumption and the extraction of resources. 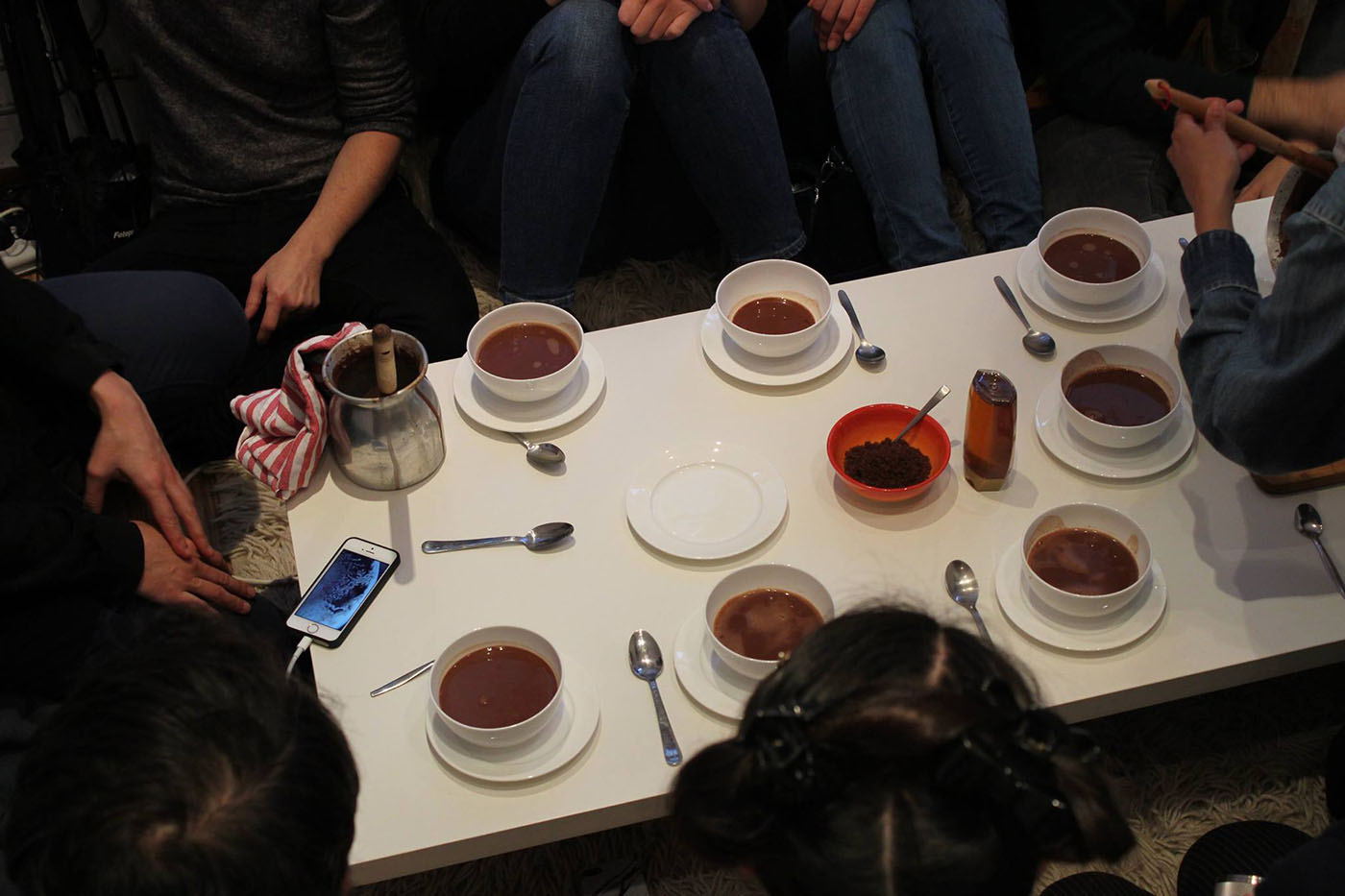 However at the beginning of the performance, Luisa Ungar and Milena Bonilla have brought a representative of chocolate. The physical presence of the pod is a gesture that presents us with the material proof of the chocolate’s origins as plant. Moreover, as a performative gesture it evokes a metaphor about the dialectical tension that exists towards the subject of the reading. In the logic of consumer culture, it is the consumer who is the subject buying knowledge about the future. But the gesture to bring the pod may indicate that the real subject of the reading may be the chocolate itself.

What this game of divination now comes to imply, is the paradox of authority when attempting to speak on behalf of things that do not have voices. In the case of chocolate, the object had been silent because it is inanimate, but this is a process that can be understood as a continuation of earlier work that attempts to speak for living things. In their first collaboration of „What Do You Hear When You Eat Chocolate“ (2014) Luisa Ungar and Milena Bonilla have been interviewing the cocao plant. Asking about the life of its life, its origins, history and travels. The plant moves and the artists translate its movements into annunciations of the human voice. It is a game of suspended disbelief wherein we listen to the plant talking. As the plant shakes, it claims to be proletariat. It’s a hard-working plant. 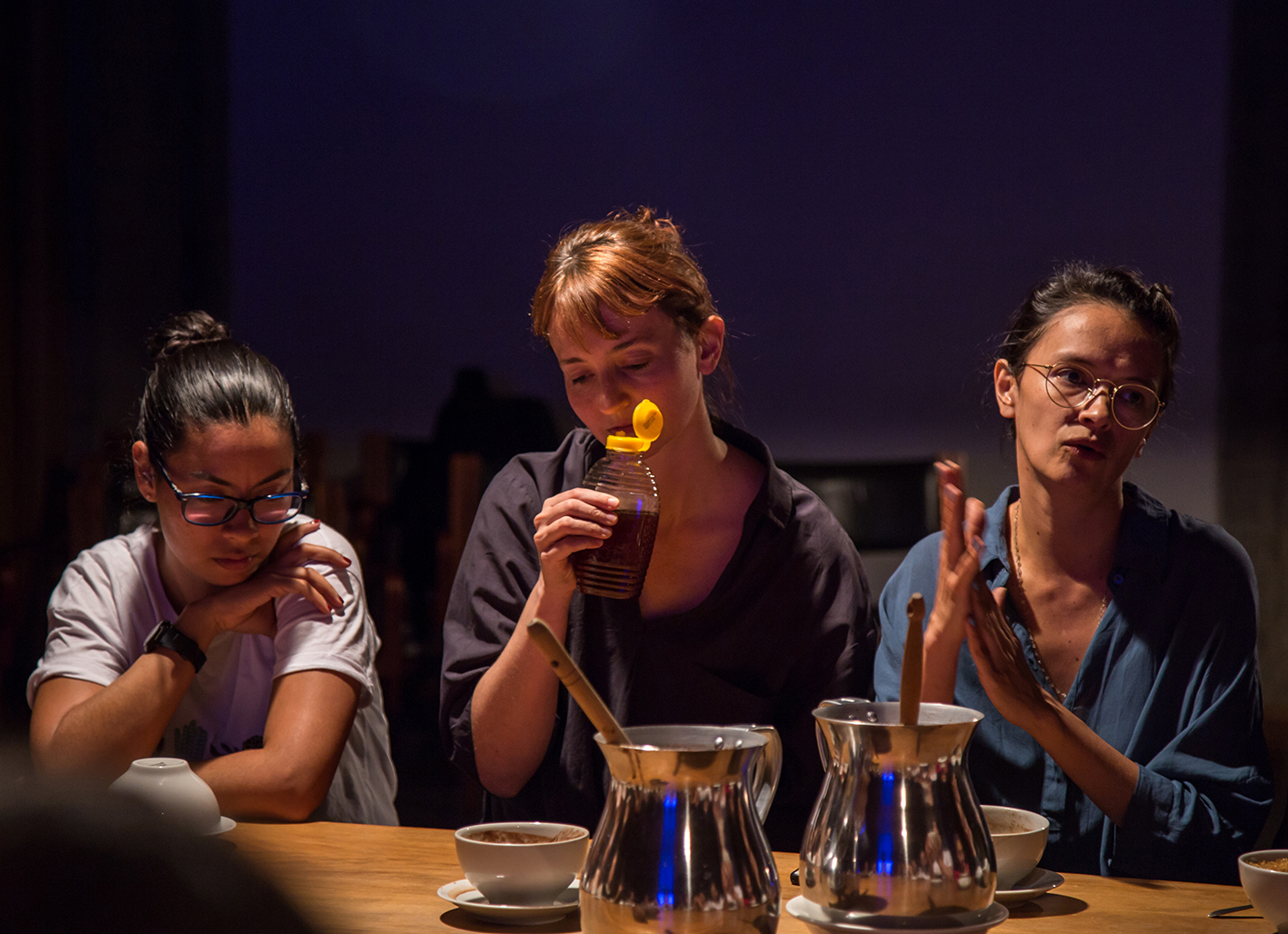 Which in turn seems to be a natural continuation of what each of the artists in the duo had been doing separately: Luisa Ungar in „Guided Zoo Visit“ (2013) had created the context of a guided tour as a context by which to talk about the illegal trade of animals and its relationship with the trafficking of drugs and art. This is a process of investigation that would evolve into „Clapping Backwards“ (2015) where when asking an animal behaviour professor about the details of her profession, the artists seems to slip almost accidentally into the role of animal. Meanwhile, Milena Bonilla had dealt with human / animal relations in „The Destruction of One Someone“ (2011) in a collaboration with Pedro Gomez Egaña to perform literary texts that describe hunting scenes. As well as within „A Report to an Academy“ (2010-2012) – an installation consisting of a pair of rotating plants, music from wildlife documentaries, and dialogue from Hollywood movies that includes scenes of a trained monkey giving a lecture to scientists.

What these works have in common is how they exhibit the formal qualities of an investigation towards the structural violence that exists in the act of interpretation. As each gesture to speak for the other will evoke the same power dynamics that had silenced the subject in the first place, perhaps recycling it. Then these works do not resolve the tension of authority when presuming to know what the other is thinking. Instead they disclose the dynamic embedded in the gesture. Mirroring the slapstick humour of colonizing persona and the condescending nature of his flamboyant self-satisfaction.

In trying to understand what the chocolate is trying to say, divination follows as a logical conclusion in the movement that has taken place between interpretation and translation. This gesture to include the divination technique of reading chocolate, evokes a complex irony within the context of a performative art piece: it implies and then dispels the consumerist logic of New Age culture by pointing towards the commodity’s autonomy as a subject of divination. The act of ritualized group participation also implies an aesthetic nod to the conceptual purity of the 60s and the weight of rational deduction that comes with it. Meanwhile the inclusion a pre-Enlightenment technologies such as divination forms a sculpted transgression. One that may have been designed to evade the weight of authority implied within traditions of Enlightenment thought. 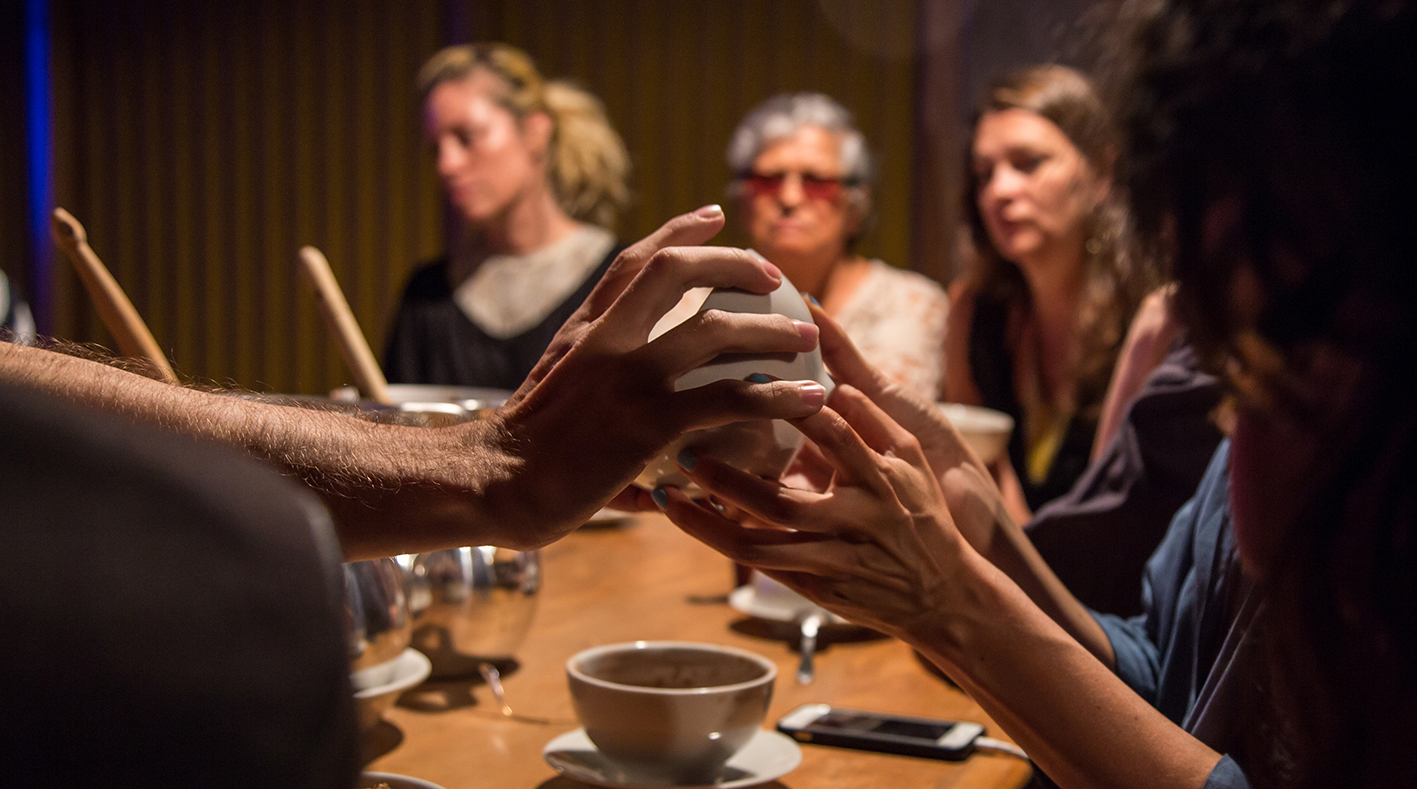 Seen strictly from an art historical perspective, the recuperation of pre-Enlightenment logic may imply the stylistic presuppositions of late 20th century postmodernism in its reaction against the rest of the century. Yet it would be a mistake to see this act of inclusion of pre-modern technology such as divination as merely reactionary. It is rather part of a wider trend within the cultural zeitgeist that has trickled into contemporary art production of recent years. This is the tendency to reflect a world of hyperconnectivity and the multiple contradiction of perception inherent to the 21st century. It is where sources promise merely degrees of credibility, and algorithms have ordered information in hierarchies of relevance, corresponding to money spent to curate its ranking. Which is why the act of divination has becomes a relevant description for the processes by which the modern mind attempts to decipher the information on offer. Its blend of intuition and half-truths corresponds almost poetically with the breakdown of analytical thought within the information structures of the modern age.

But there are other factors at play in the decision to include pre-Enlightenment technologies of thought. As the chocolate plant herself point out, it had been a commodity within a system exploitation designed to enrich Europe through territorial conquest in South America, which combined with forced labour extracted from Africa, created the structural condition by which the cognitive achievements of the Enlightenment could be subsidized. In addition to exploitation embedded in international trade relations, the chocolate plant may also point out that even on a local level, there exists a class relation between manual labour and intellectual labour. The fact that someone, such as the chocolate plant, had carried out manual labour, is what had allowed another class to pursuit cognitive labour. A body unspoiled by the labour of the earth, may be prone to come up with ephemeral and theoretical systems of thought. To evade Enlightenment logic, is therefore also to avoid not only the structural component of exploitation to which it is aligned, but also the dichotomy of body and mind implied by the division of labour on which capitalist exploitation had been founded.

In the basement one of the building within the 44th National Salon of Artists in Pereira (CO), a group gathers in something like a conference room. It is a room with a very big oval table around which the participants sit. There is another row of seats for those who are passive observers. By participants, what is implied is the activity of having taken a sip of the chocolate and thereby to infuse the liquid with the prophetic potential of each person that forms the circle. The other thing that participants can do is to add their own interpretation about the meaning of stains left in the bottom of a cup of chocolate. It is the setting for a situation in which a group draws together towards a single point of attention. To the extent that it is a space for a formal question, it is a return to ritual. Expectation abound.

Specifically, in using chocolate to read the future at this particular moment in Colombia, the upcoming peace treaty would inevitably be up for discussion. The vote to establish popular support for the proposed treaty had been on everybody’s mind. It is a moment of suspense, like that of a coin being flipped into the air. The coin turns around its axis for a while before dropping down. And it turns out that the year of Brexit and of Trump, is also the year that gave a ‘no’ in the vote for the Colombian peace treaty. This moment that had been defined by a clash between post-truth and a deficit in democracy, was also defined by the weakness of modern-day future-telling devices. Like any other form of prophesy, a poll executed before an election will effect the results.

So there is a special kind of formal irony that happens in the reading of the chocolate when participants volunteer their opinion. It invokes a frustration verging on the comical, when competing to have any particular interpretation, about the meaning of random patterns, taken into account. It reflects the fact that in the 21th century opinions are always being extracted; there are endless possibilities for participation. But no one asks what the participant thinks without having an ulterior motive. So the contemporary subject is naive to think that their opinion could hold more sway than the necessity of a spectacle to be successfully concluded. Because actually, the participant’s input had already been had in the form of stains at the bottom of a cup. It is just up to the professionals – the official oracles – to tell us what they mean.

This irony implied in the gesture of staging a collective reading of the future may therefore encompasses other problems at hand, when it comes to life, democracy and art: how the inability of any group to even see the same thing, much less agree on a future vision, has long since been self-evident. But the interesting thing about staging a ritual in which to interpret an abstract image, to see if the rabbit it is turning to the left or the right, lies not so much in the collaborative approach in seeking an answer to any particular question. Rather it is an investigation into the formal conditions by which the question had been posed. It is a way to explore how the question’s formal qualities may effect the answers extracted. Just as it is a way to consider how the outcome of any survey may change, depending on whom the question had been directed. Which in turn is also a way to wonder if it is possible, instead of recruiting more voices to speak for things that have been quiet, to pose the question towards the thing itself. Perhaps it is a way to ask the ones who had been at peace what they are thinking, and how they did it.