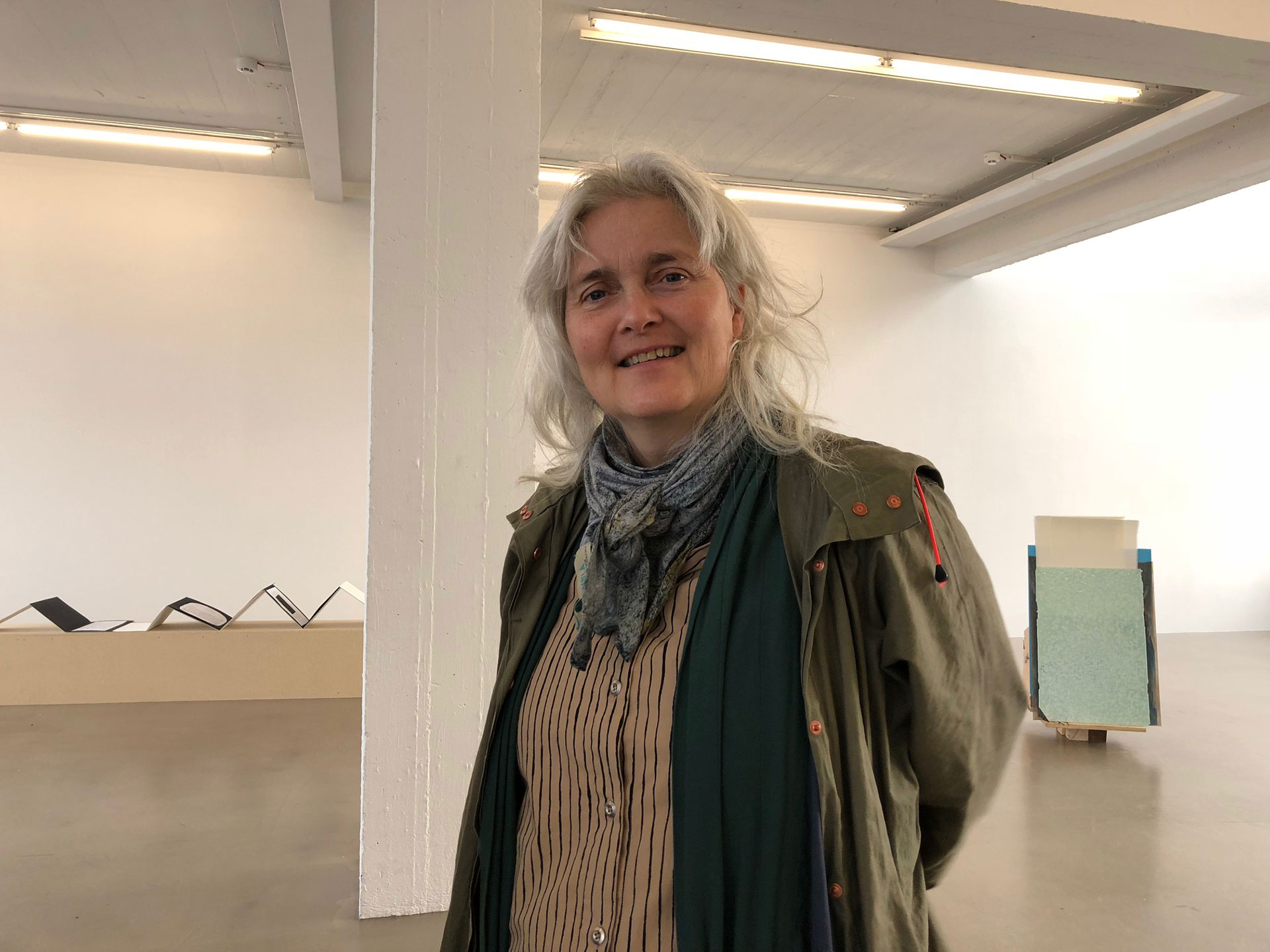 Eyglo Hardardottir is one of those artists who for some years now has been associated with the title of being an artist’s artist. It is therefore fitting that Eyglo Hardardottir’s solo exhibition, Another Space (Annað rými), takes place in The Living Art Museum. Having a system of membership by fellow artists that guarantees independence from the pressures of public institutions or private patronage, its board has mandate to host works that embody avant-garde values at each moment in time.

While there is no style nor program of content that qualifies work as being the labour of an artist’s artist — as both would denote a trend rather than an aesthetic, Another Space is defined by a poetic sense of materiality. Even to the extent that the work gives the impression of a tactile sensibility common to a younger generation. This being an aesthetic built on excavating beauty from within mundane materials. And is an approach steeped in structural irony that may have come about in response to expectation for work to have social content or for its formal basis to be over-conceptualized.

The works of Eyglo Hardardottir (1964), however, carry an internal tension that are not easily read in terms of biographical information. What they convey is an elaborate microcosm of nuances within texture and form, the success of which relies on a quiet sense of ambition and what seems like long intervals of meditative concentration. The outcome of which transmits an intelligent sense of sincerity. The kind that is in fact the antithesis of irony. 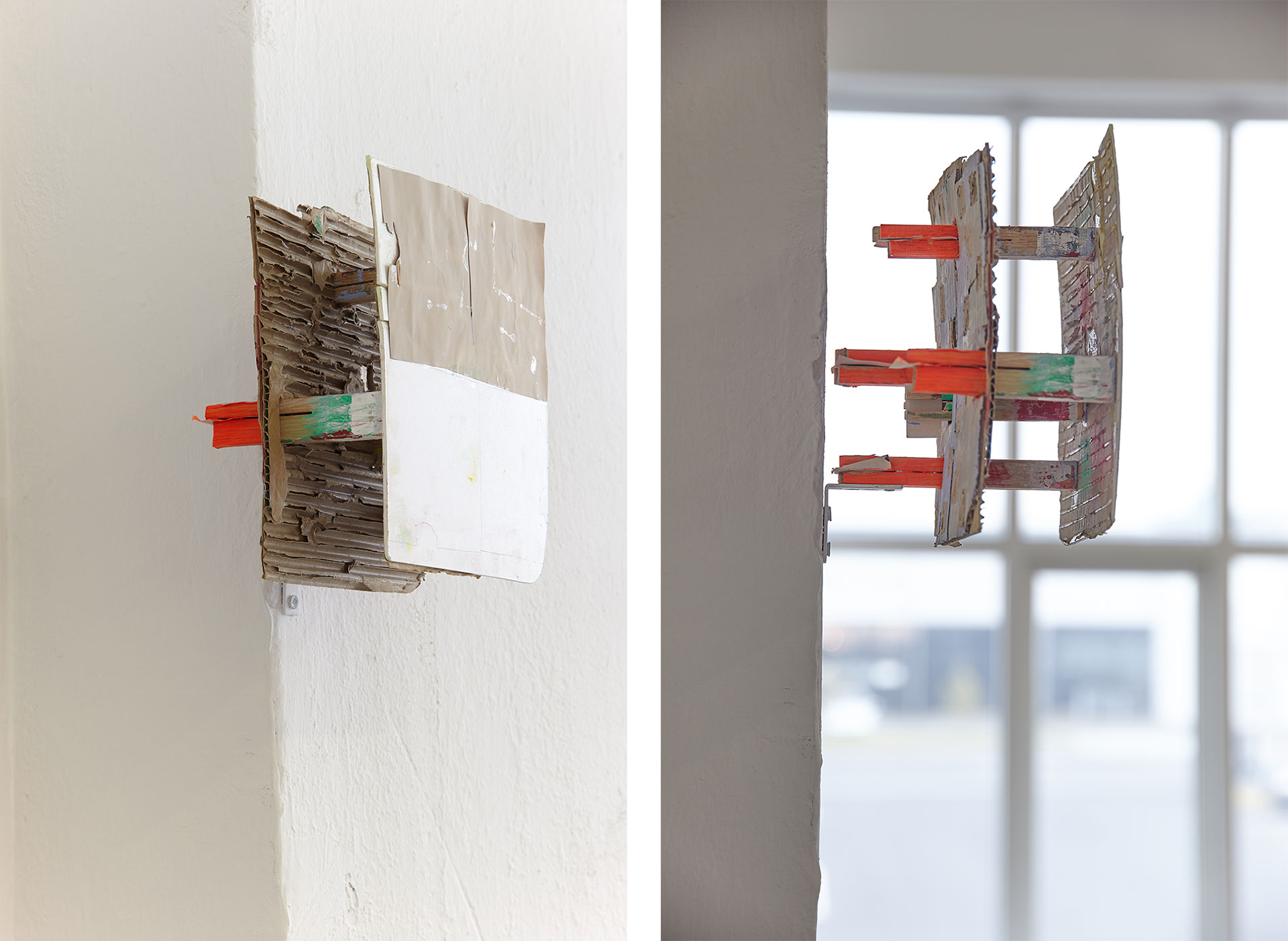 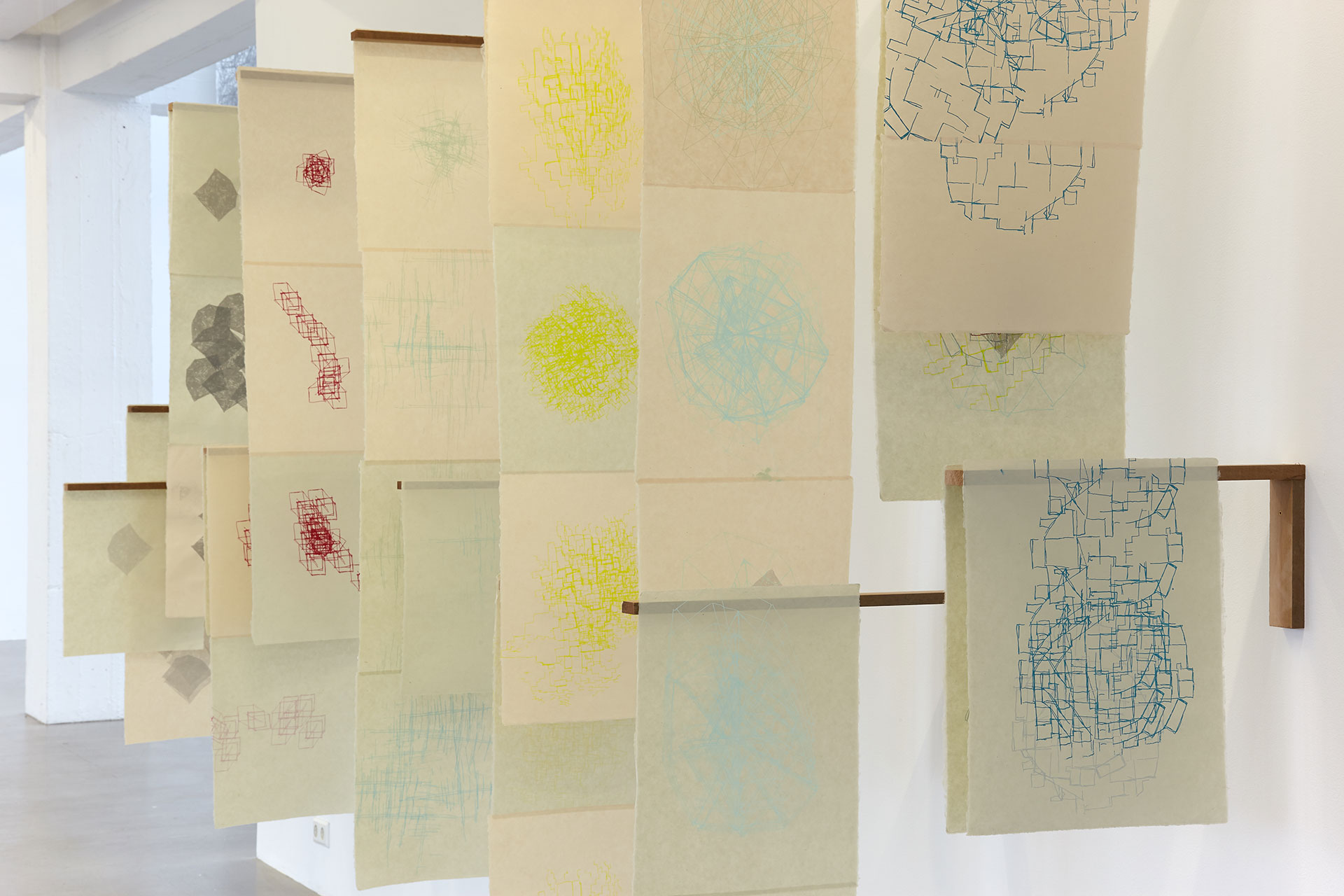 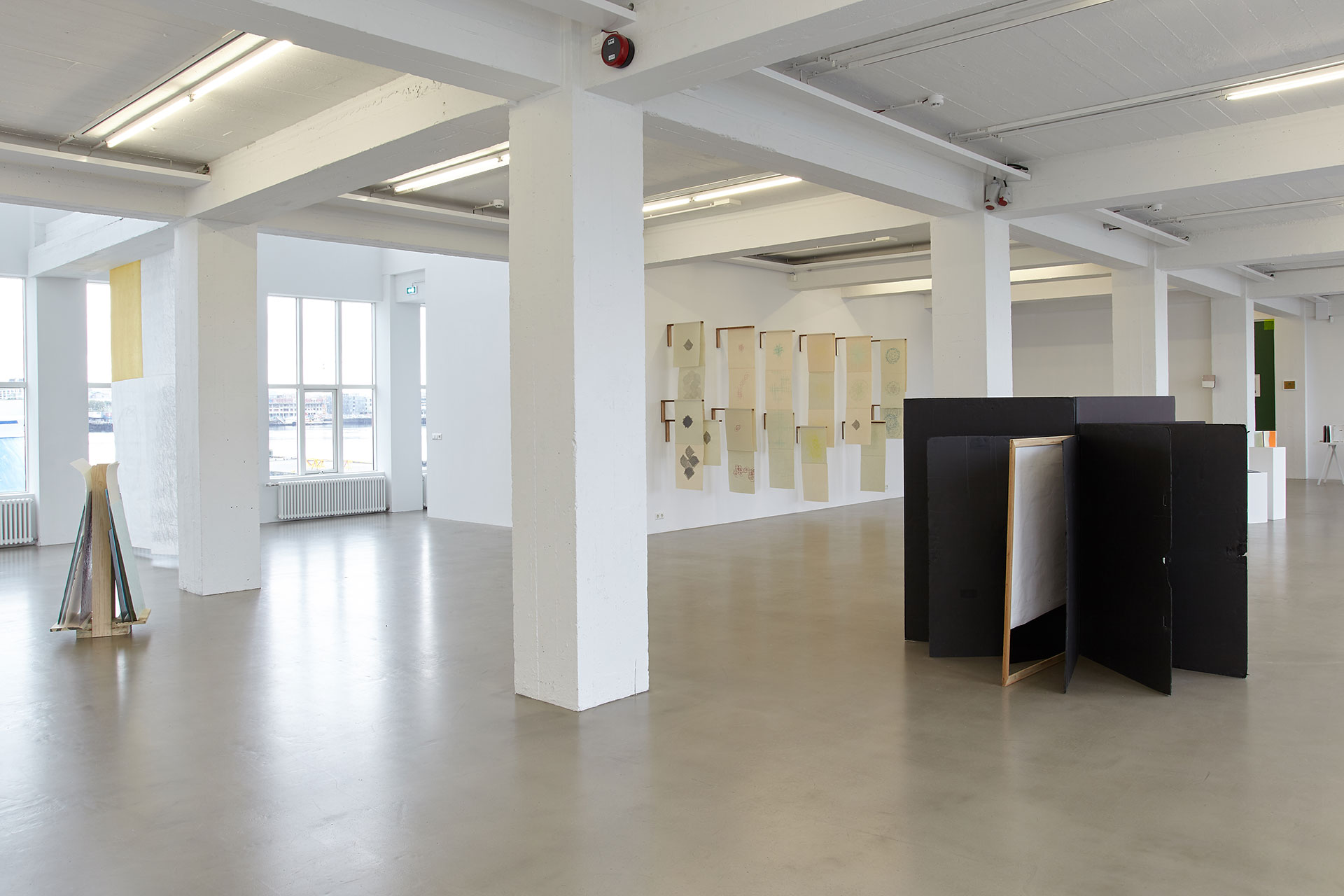 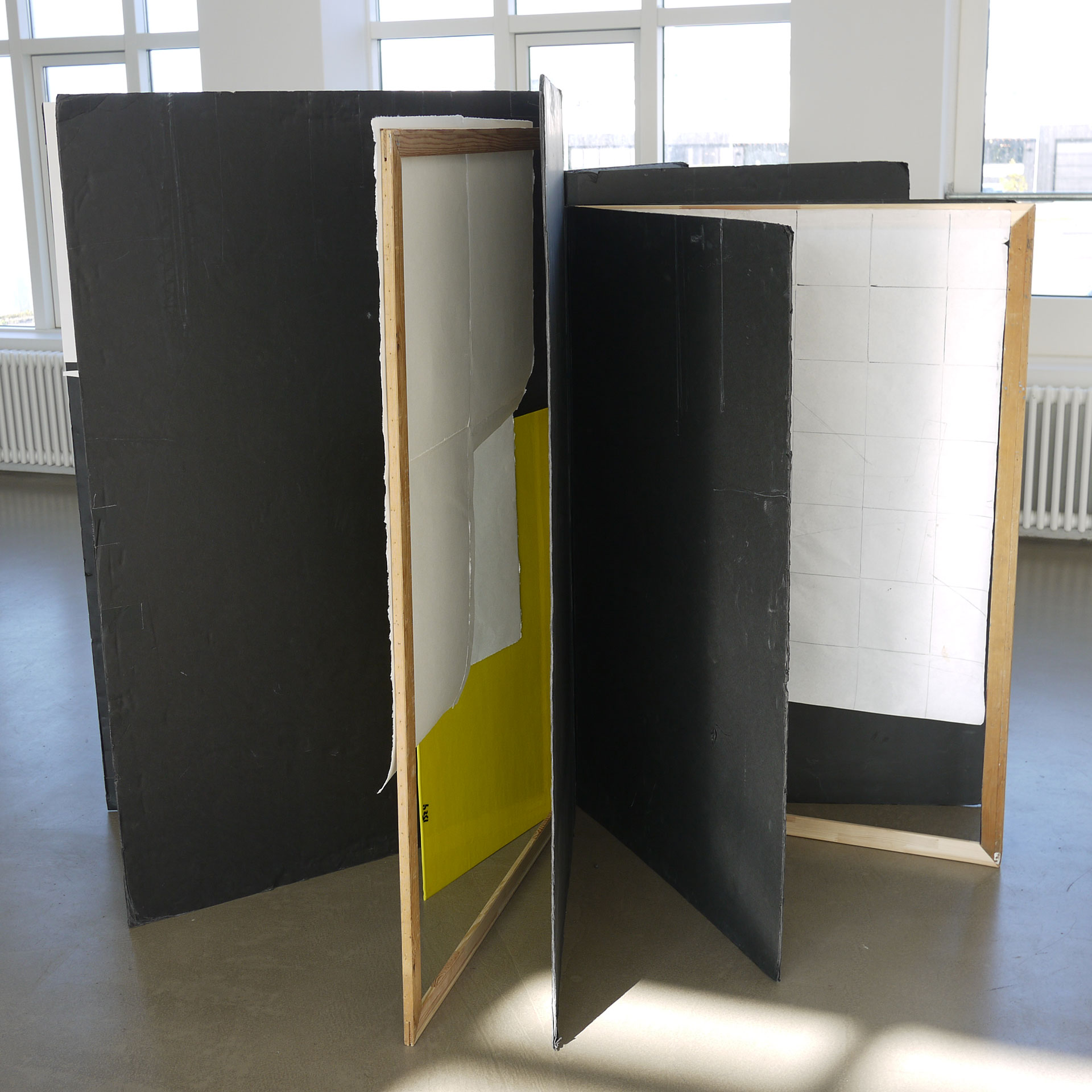 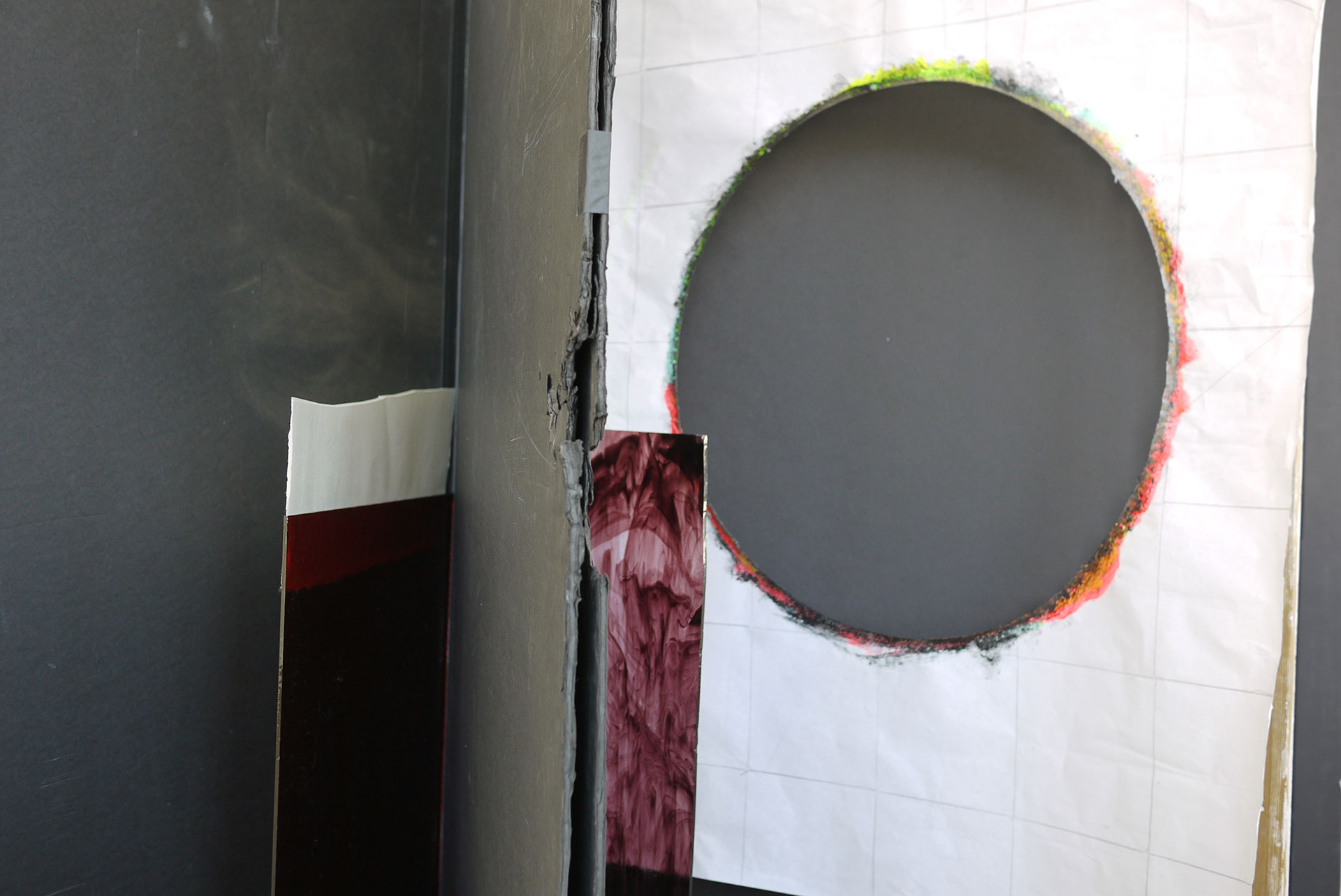 As a medium of creation, Eyglo Hardardottir has chosen to concentrate on the materiality of paper. While still fulfilling its traditional role in being the two-dimensional support for colour and form, paper is drawn into a conversation that extends into space to take the form of sculpture. In evoking a vocabulary of structural possibilities, the artist applies what seems like an exhaustive list of commercially available paper. Ranging from handmade paper from Japan and China, to cardboard or simply copy paper, each had been chosen for its capacity to produce a dialogue between their grain and structural consistency.

An example of such a structure lies in “Four” (2015), a small-scale structure made of cardboard, wood and paper. That material is forced into an architectural construct with the help of small wooden support beams. Those sheets form two vertical layers that protrudes from a column at the entrance of the exhibition space.

“Floor Sculpture” (2018) is another work that explores the ability of paper to form structure. A floor piece made from sheets of paper and glass, they are held in place by being attached along a central axis in a structure which allows each sheet to stand upright. The visual effect is of a large book standing on its spine so that each page may be “read” by circling around the construct. The content of which lies in variations of materiality from which each “page” is made; ranging from the rough stability of cardboard, the more delicate grain of loose sheets hanging from wooden frames, to handmade glass that enters in dialogue with the textures of paper.

Other pieces within the exhibition are unified by an underlying theme. It is based on a series of hypnotic sessions the artist had undergone first in 2007 and then between January and April 2018, each of which had been centred on a specific body part. Namely the throat, heart, stomach, brain, tailbone and face. That there is a concept that unites key pieces within the exhibition does on first impression contradict the sensation of materiality Another Space conveys. One may even suspect the inclusion of a concept to be a weakness; a capitulation towards underlying expectations of contemporary aesthetics. However, it is the very materiality of its record that remains at the forefront of each presentation.

The result of the hypnotic sessions is presented as text within a booklet on view within the exhibition. It contains transcripts written under the heading of specific organs. Yet descriptions have no concrete markers by which the body may be understood. Free of preconceived knowledge about biology or chemistry, the text follows a dream logic full of psychoanalytic insights about the relationship between memory and the internal workings of the human body. Asserting through visual metaphor how the imagination implants knots and barrels of cement at strategic points within it, and how by consequence, it is the imagination that is capable of releasing the body from that same weight.

Those words reappear within the formal composition of “Six Hypnotherapy Sessions, text” (2018), where they are printed on simple copy paper and cut into oval forms or trimmed along its margins. As if to reinforce the sense of fragmentation the text conveys, some prints are left intact while others appear in duplicate form and are pasted onto the other so as to overlap. Others have sections cut out from their middle and placed on opposite sides of diagonal mounts that resemble the slant of an open book.

The hypnotic sessions were also recorded in drawing. “Six hypnotherapy drawings, originals” (2018) consists of four rows of cardboard that stands upright in a zig-zag formation. Its sides display drawings of geometric shapes and compositions in which blocks of pigment alternate with folds of paper that coincide with incisions to cardboard. Rather than displaying drawings as the factual proof of a concept carried out, they are placed on the floor to be seen at obtuse angles and obscured by the very construct they are displayed upon. As a composition, it reflects the process of archiving internal sensations form within the subconscious. They tend to be perceived indirectly, caught in fleeting glimpses.

Those drawings reappear in the form of silkscreen prints, “Six hypnotherapy drawings, screenprint” (2018). They are printed on large sheets of handmade paper that are attached to each other with bookbinder glue to form six lengths of material that hang from vertical beams that extend from a wall. Some of those prints are large enough to occupy a single sheet of paper while others are scattered along its surface or repeat multiple times within narrower sections. Those forms range from simple cubes, delicate sketches of vertical and horizontal lines, to more intricate nebulas of open squares, each of which is restricted to its own colour scheme of either red, yellow, grey or shades of blues.

One may attempt to connect the content of a hypnotic session with specific prints. There are diamond shapes made by what appear to be densely drawn lines that resemble descriptions of the face and how it takes on the appearance of a mask. While round nebulas made of small open squares seem like the floorplan of a prehistoric city that is similar to how the throat had been described. But the validity of those interpretations remains an open question. While texts have titles to inform the reader which organ had been its inspiration, the drawings do not.

Although a continuity clearly exists between the number of hypnotic sessions and forms that exist within the same number of compositions, there remains an ambivalence as to which form is the referent to what organ. This sense of ambivalence is what aligns the concept of the hypnotic sessions with a larger working model specific to the artist. In which case drawings do not present schematic diagrams that represent mental projections by which the mind seeks to understand the inner workings of the human body. Such a style of presenting information would essentially form a hierarchically relationship in which the body is subordinate to the mind. What they instead present is a network of texture, colour, and form, that describes sensorial information through a logic of physicality. 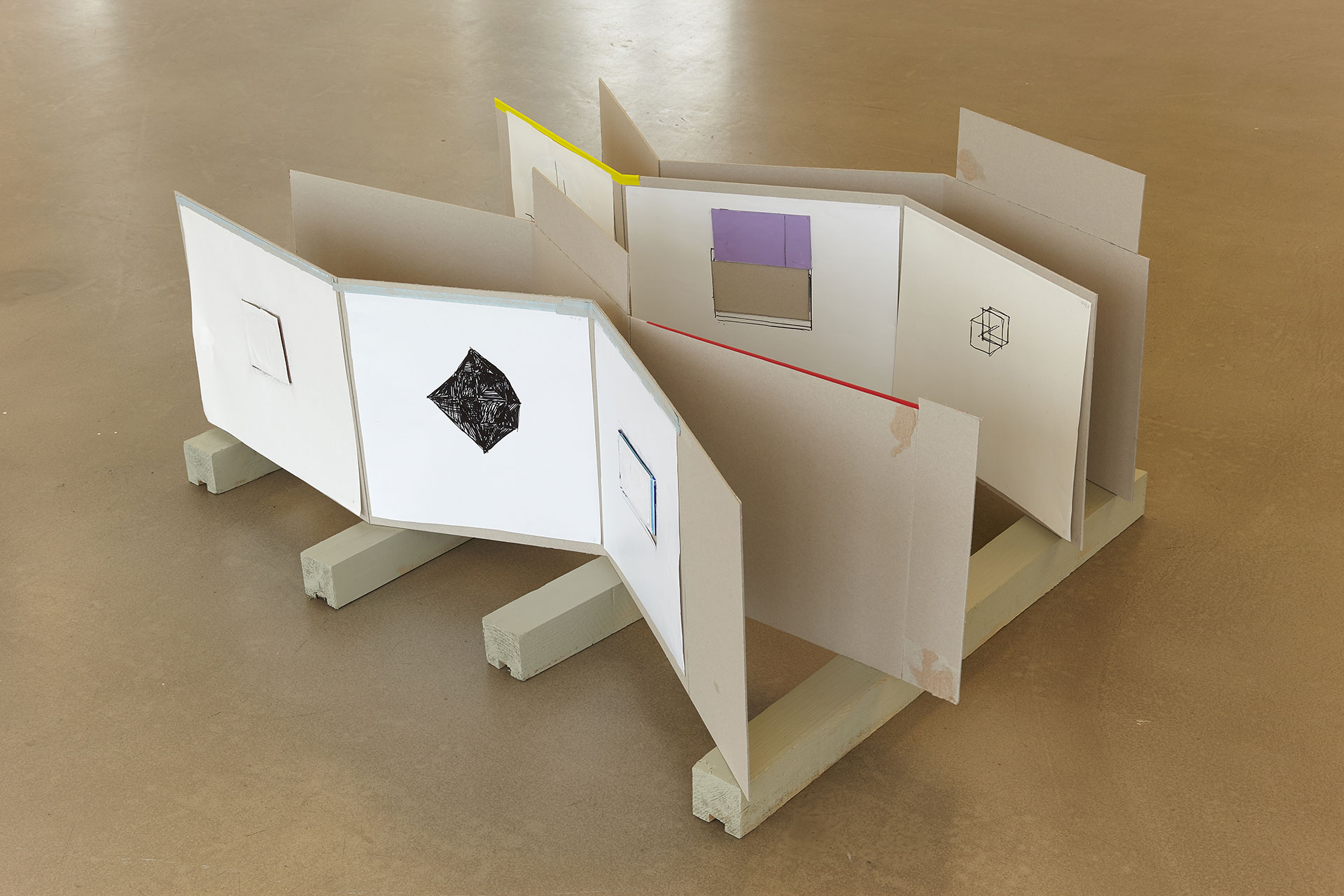 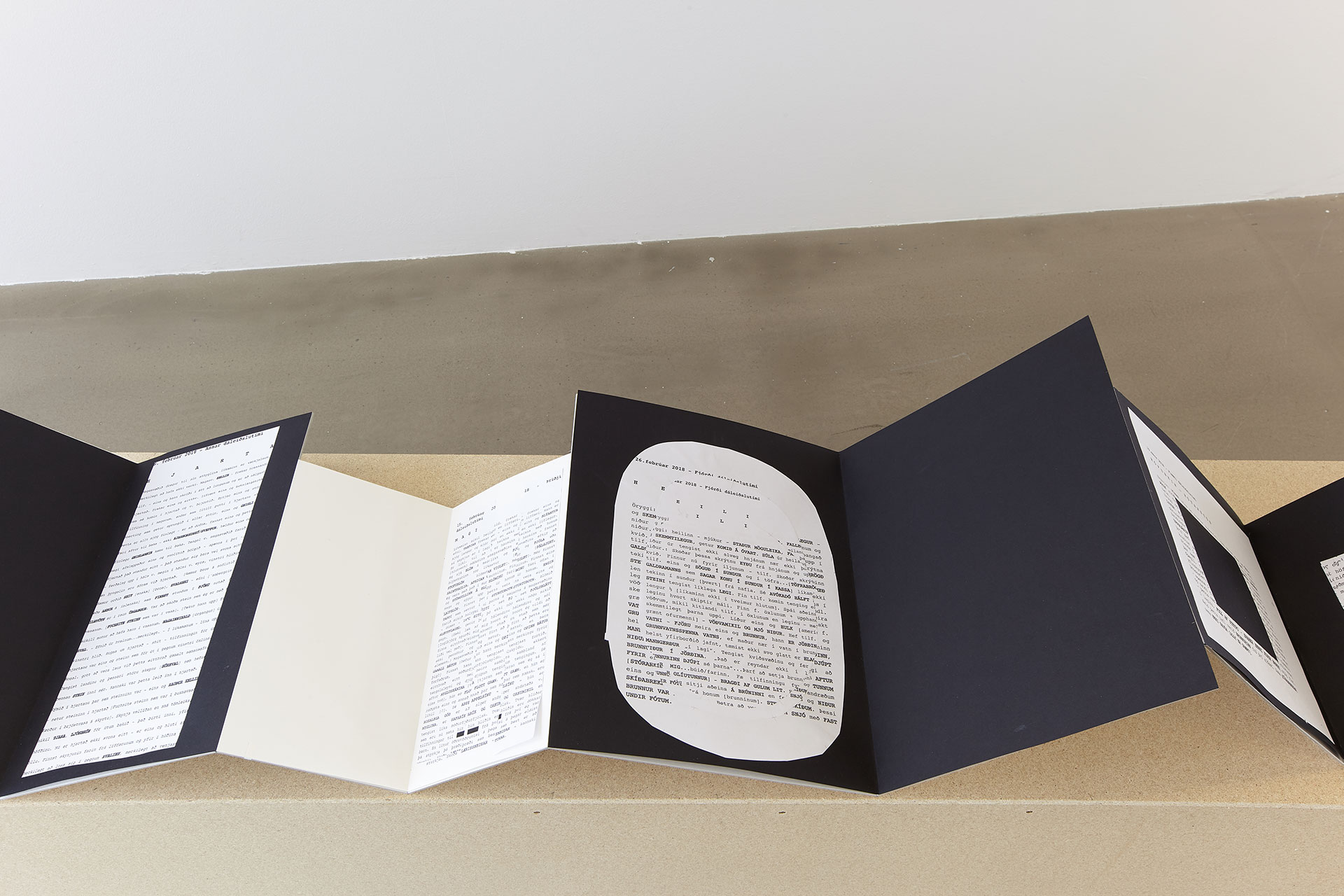 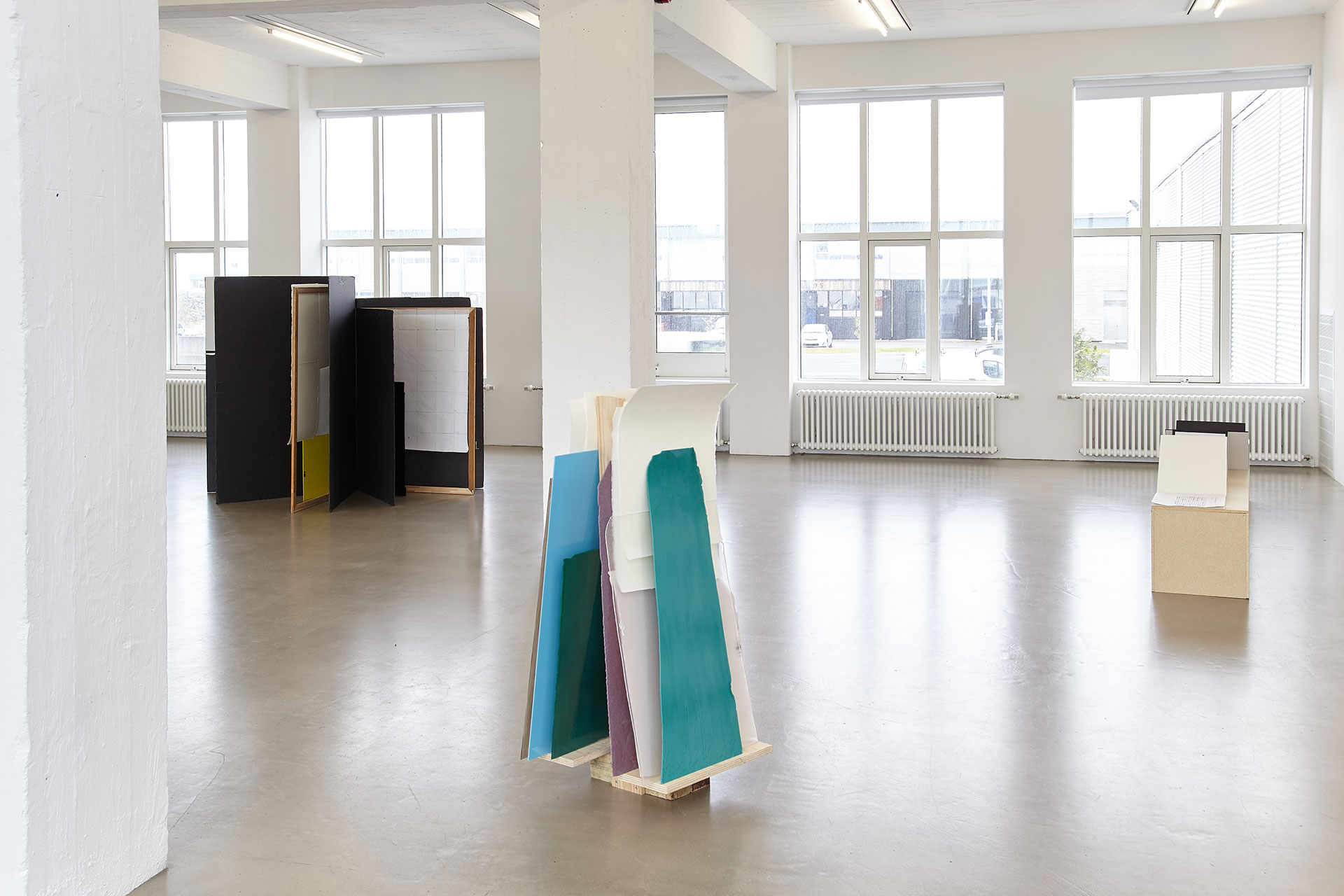 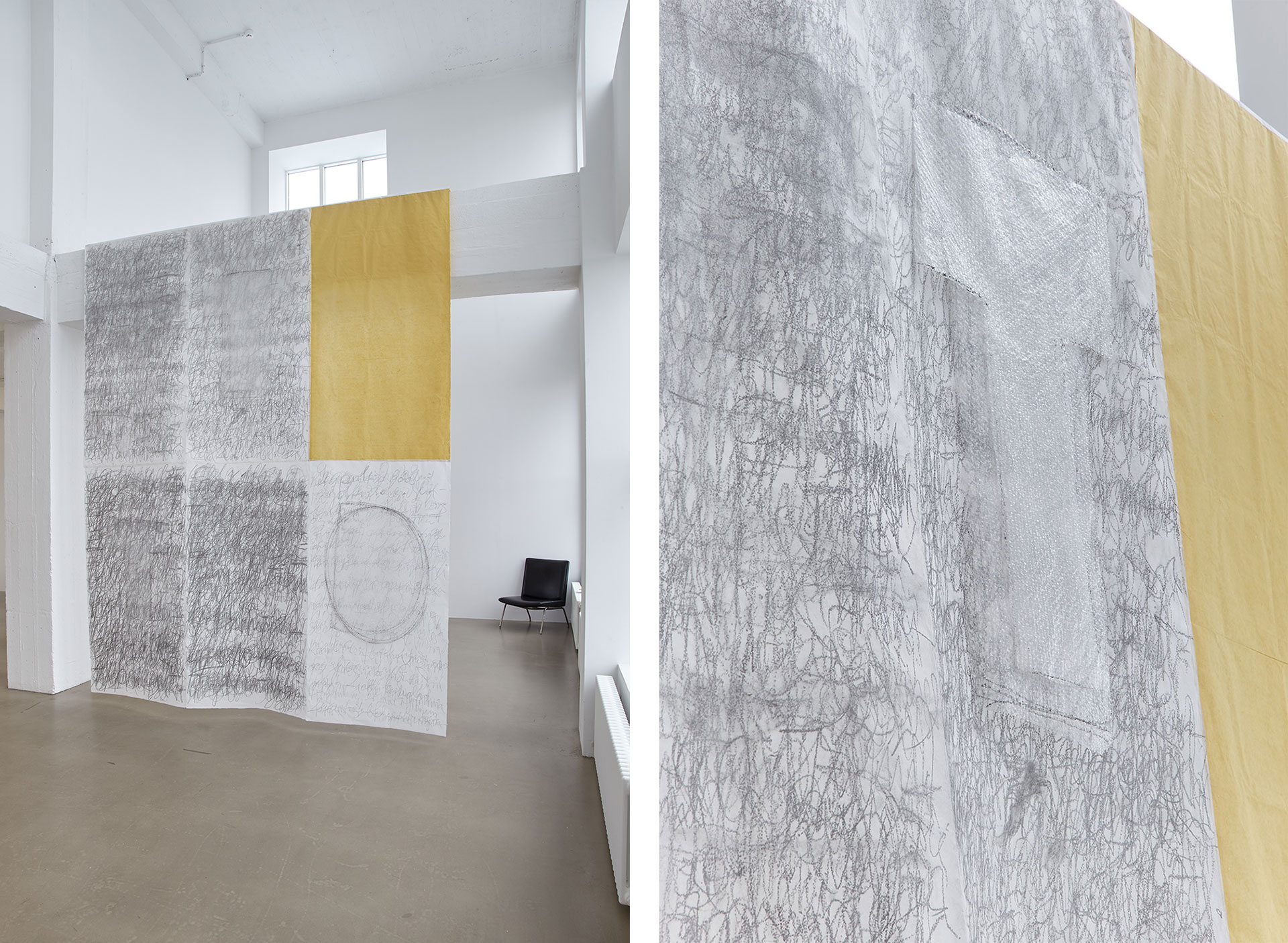 “Drawings, six Hypnotherapy Sessions” (2018) is another variation by which the results of hypnotic sessions are made into tangible form. It consists of large sheets of handmade paper attached along their edges to form a single surface suspended within the negative space of wall and support beam. Every other sheet has shapes made of bubble wrap attached to paper, all but one of which is crowded with marks that seems like writing but could just as well be traces left by the body in the act of recreating the memory of an experience. Whether that record is in the form of written language is unclear and most likely irrelevant.

What the resulting compositions propose is a symbiotic relationship between form and the human body. Both of which are interpenetrated by thought when communicating an interiority of the self to the world. What transpires is the sensation of being confronted with forms so delicate as to seem fragile. An effect that mirrors the choice of paper as a medium for sculptural installation. It being made to stand upright, seemingly by the force of the artist’s conviction that each material should be allowed to communicate in its native tongue.

This confrontation with form leads the audience to understand how a thing perceived as weak may non-the-less derive strength from an integrity to its own material condition. Which in turn produces a sense of depth that explains the designation of having been made by an artist’s artist. A term which inspires awe in a small group of professionals but does not necessary transpire into attention from a general public. However, too much heroic reverence may be given to the designation. As a guest had remarked at the opening, perhaps the art of an artist’s artist can more accurately be described as having been made by an artist, point. How to describe that which is done by anyone else is up for debate.