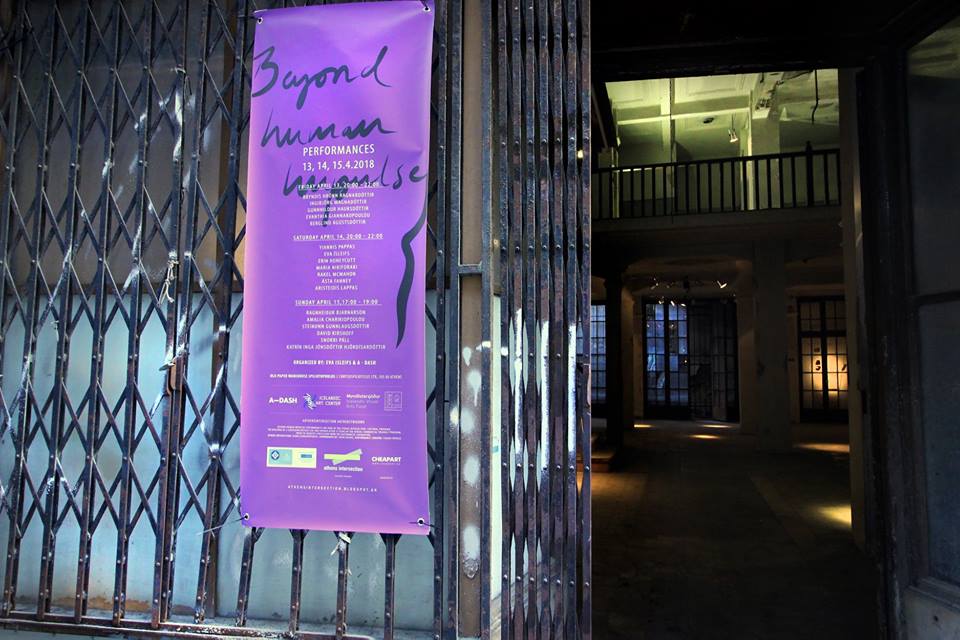 The performance arts festival, Beyond Human Impulses, began at Mengi in Reykjavik on February 2nd, 2016 as a monthly performance series occurring on the first Monday of the month. Between its inaugural performance and July 2017, 75 performances were realized. The festival was initiated by five female Icelandic artists: Bryndís Hrönn Ragnarsdóttir, Ingibjörg Magnadóttir, Eva Ísleifsdóttir, Ásdís Sif Gunnarsdóttir, and Katrín Inga Hjördísar Jónsdóttir, who all share equally the role of curator while also performing in the festival themselves.

Before Beyond Human Impulses, a disparate group of artists established Leikhús Listamanna, a platform for performance artists in Reykjavik that began in 2003 and lasted on and off for the next decade. Other than that, there have been no other platforms of this kind devoted to performance.

When Eva Ísleifsdóttir opened A-DASH, an exhibition space and art residency in Athens, Greece in 2017, it became an obvious place for the next incarnation of the festival. On the weekend of April 12th-14th, Beyond Human Impulses held its first festival in an old paper warehouse in the commercial district of Athens along with the help of Athens Intersection, Athens Trigono, and CheapArt, an organization that secures short-term art venues in empty buildings in Athens.

The festival opened on a Friday night with the performance Apogee or Nobody by Bryndís Hrönn Ragnarsdóttir. A fitting inaugural piece, the robotic vacuum that roamed the floors of the old warehouse seemed to bring awareness to the little corners and crevices of the decaying building, showing the viewers a new point of reference for vision that would set the tone for the rest of the festival. The saucer-shaped vacuum with its internal whirring motor spun in circles and sensed the space´s corners, the columns that stood under the balcony, and the feet of viewers who followed its movements patiently as though being sniffed by a wild animal. As the robotic vacuum explored the space, it sang a melancholic song in acapella through a speaker placed on top of it, echoing throughout the building.

Humming of Venus by Berglind Águstsdóttir. 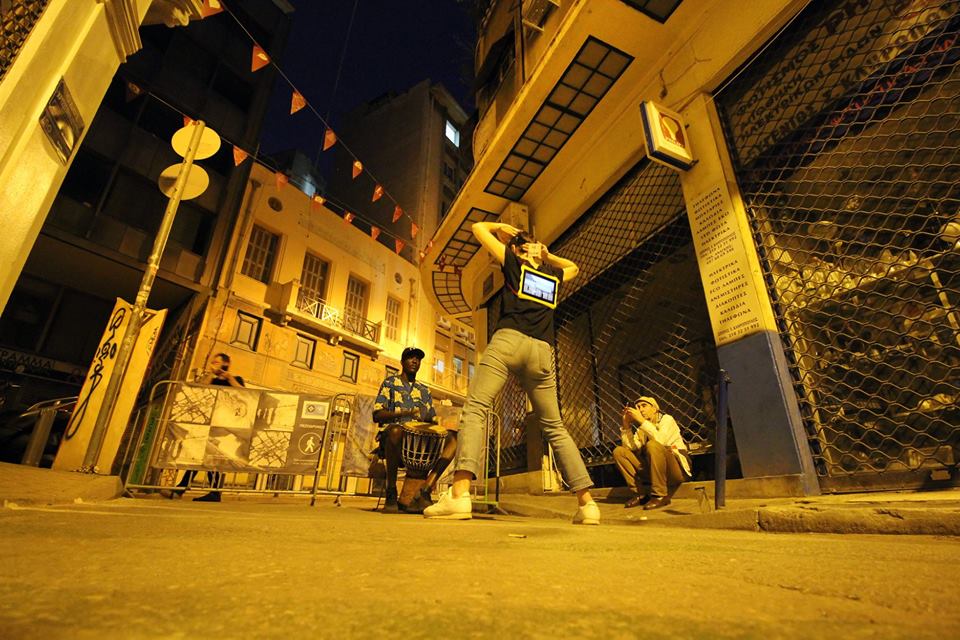 The Storm is Coming by Maria Nikiforaki. 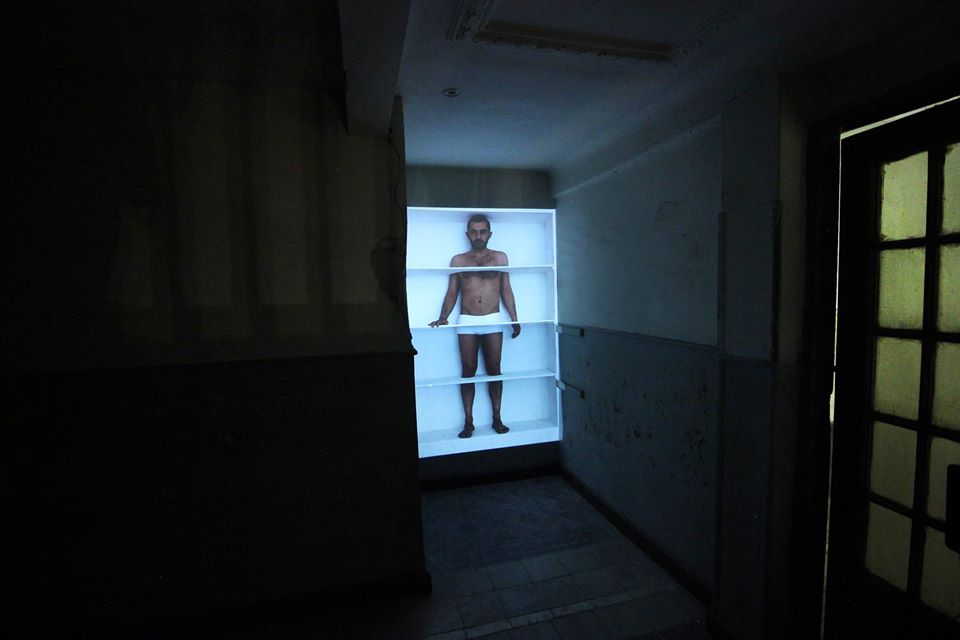 Apogee or Nobody by Bryndís Hrönn Ragnarsdóttir. 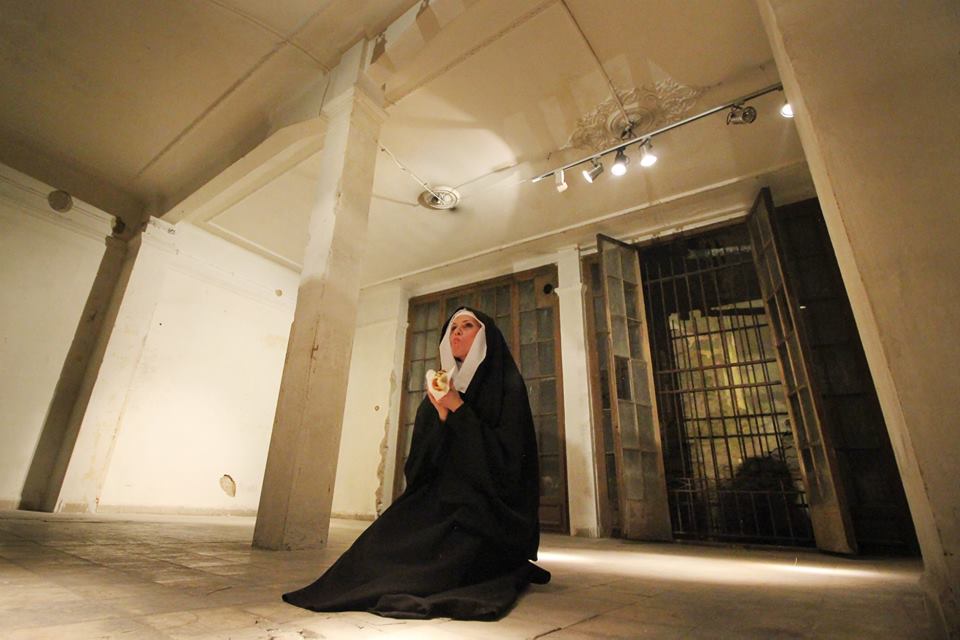 Reality in other words by Rakel McMahon. 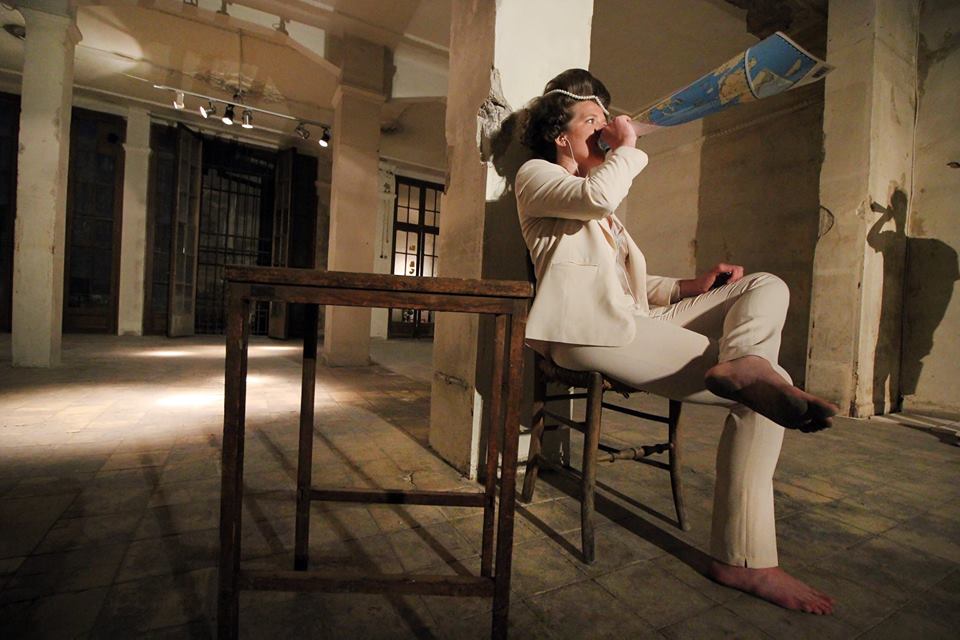 With the space now mapped by these beyond human senses, the evening could begin in earnest. “Thank you for believing in the moment,” Eva Ísleifsdóttir announced on the opening night. Performance thrives in the moment, the fleeting image or sound or combined effect, the unique audience, the circumstantial arrangements of the space, the day, month, era – all a moment (that can’t be purchased, although for sale throughout the weekend were posters with quotes from each of the 18 participating artists.) The passing moment that is so circumstantial in performance art, although in some instances can be restructured in similar surroundings and set-ups, are inevitably tragic, in a way, as it can never be documented for posterity in its true form.

The decaying paper warehouse on the cobbled, winding street called Chrisospiliotissis set the stage perfectly for these fleeting moments to appear and then dissolve. The space was characterized by its high ceilings and ornate decoration encircling the lighting fixtures in a state of decay, the tall, obscured windows with iron bars crossing them, the dust that covered every surface, and the wooden staircase that was a little too noisy to imagine lasting many more events like this one. Even the part of the ceiling that came crashing down overnight in a crumble of pieces on Saturday was a performance on the part of the building, a reaction from the space itself.

What better location for three evenings of performances that all seemed to relay a comment on the tragedies taking place in the world outside and the inner catharsis that may seem personal, but speaks to those events as well. Since we are in the realm of performance art, however, we do not have to serve the proper function of tragedy, regardless of how eloquent our poetry or how fine our choreography because this was Beyond Human Impulses, which became a running question throughout the weekend. What exists beyond human impulses?

We decided it was, more or less, when we decided to go beyond the human impulses of anxiety and worry to embrace an impulse that is co-creative, empathetic to the world at large, and creating a container in which to perform and enact rituals that transform the performer and include the audience in the transformation. Consider Katrín Inga Hjördísar Jónsdóttir’s Sunday performance Ego Friendly Love: a ritual in the nude in which she placed flowerpots and triangular mirrors around the room with audience members involved in the reflections.

On Friday evening, Gunnhildur Hauksdóttir enacted Braid Choir – Solidarity, a piece that has been performed before in different compositions of choir members and lyrics. With a gathering of long-haired women standing outward in a circle, Gunnhildur stood in the middle braiding the hair in a single circular plait while the choir spoke and sang sometimes in unison and sometimes as lone voices. The piece was dedicated to the two young Greek soldiers who were taken into custody in March 2018 for allegedly entering a Turkish military zone on suspicion of attempted espionage and who still remain in custody.

However, in Dionysian fashion, tragedy is followed by dancing and rapture – this was brought in full aesthetic qualities of Beauty and Significant Form in a performance by Berglind Águstsdóttir titled Humming of Venus who opened with the recorded sounds of the planet Venus borrowed from NASA. In her flowering kimono, bubble-blower, tinseled rotating fan and bright red lips, she became a new kind of demigod, singing along to a track overlapping Indian ragas with the duet ‘Islands in the Sun.’

Imitation, Aristotle argued, is a natural human impulse that humans enjoy and is our greatest learning mechanism. In this way, he defended tragedies, stating that they could appeal to the mind, the emotions, and the senses, and if confronted in a healthy manner, bring about a cleansing emotional catharsis, which is definitely the experience of a performance by Berglind – propulsion by catharsis.

Saturday opened with Eva Ísleifsdóttir’s Exiting…, an embodiment of the human inability to escape from the signs and symbols that surround us. Eva lay beneath the humongous exit sign, surrendered to the external meaning it purported to portray. Following Eva’s contemplation under this very physical and heavy sign under which she literally lay crushed on the pavement was a performance by the author that also dealt with our connection to universal signs and the meaning we make from them. In a baroque hair-do of the same era in which the German Romantic poet Friedrich Hölderlin lived when he wrote in Athens in the early 18th century, whose writings were quoted throughout the performance, a series of planetary aspects of the day were read.

Mars trine Pluto, for example, was applied a meaning based on observations taken from walking around the city in the few days leading up to the festival. Does the brimming strawberry cart on the square imitate Venusian effects? Is that couple fighting by the fountain an imitation projected in our earthly reality of Uranus’ interaction with the moon today? While there are thousands of opinions by astrologers to be found especially on the internet, the real answer is not as important as the place the question takes us, which is back to the mythic imagination, a reminder that our 40,000-year-old brain has not changed since the time when we couldn’t tell the difference between mythic reality and reality – they were both an equal reality, just a moment in time.

Following are names of the artists that participated with links to artists websites:

All photos courtesy of Georgios Papadopoulos.