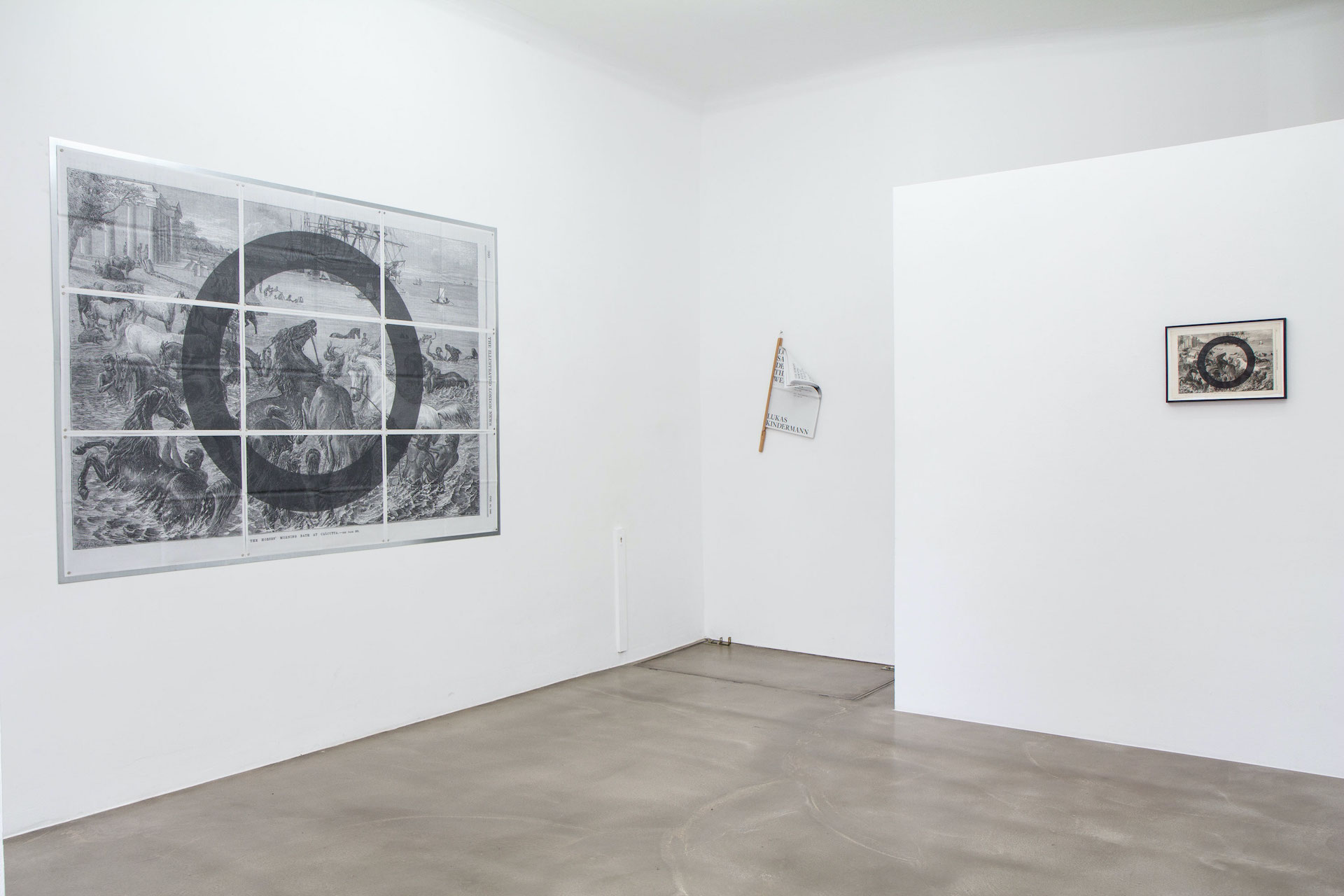 On March 7th, 2020, ´uns artbooks presented its second publication by artist Lukas Kindermann, in cooperation with Studio Studio. The publication is presented as an exhibition in the gallery formerly known as Maniere Noire in Berlin, where ´uns will be showcasing its future exhibitions. The small white cube is perfectly befitting the transference of the sensibilities of the artists‘ book into the spatial experience of a gallery.

Guðrún Benónýsdóttir has been operating ´uns plural for one since 2015. The aim of ´uns consists of publishing artistic (artist made) books and multiples and curating art shows in various contexts that are sensitive to how the environment, including the architecture of the space and the open discussion between the two forms of the books and the white cube; a similar way of thinking but with different materials. She explained to me that her affinity for moving between curating exhibitions and publication matters was a natural development of her investigation of the book format.

The work of Lukas Kindermann is an exceptional example of this aesthetic. In Kindermann’s Illustrated London News Editions, a novel perspective is given to the newspaper as an object of design history as well as a medium that once announced the present moment; it was New at one point in time. Today, in times of such unprecedented news, this expanded view of the ‘News’ medium as a historical object gives weight to both the technological present and the global arrival of time, change, and information. After all, the book form has always been the carrier of information that lasts the longest. 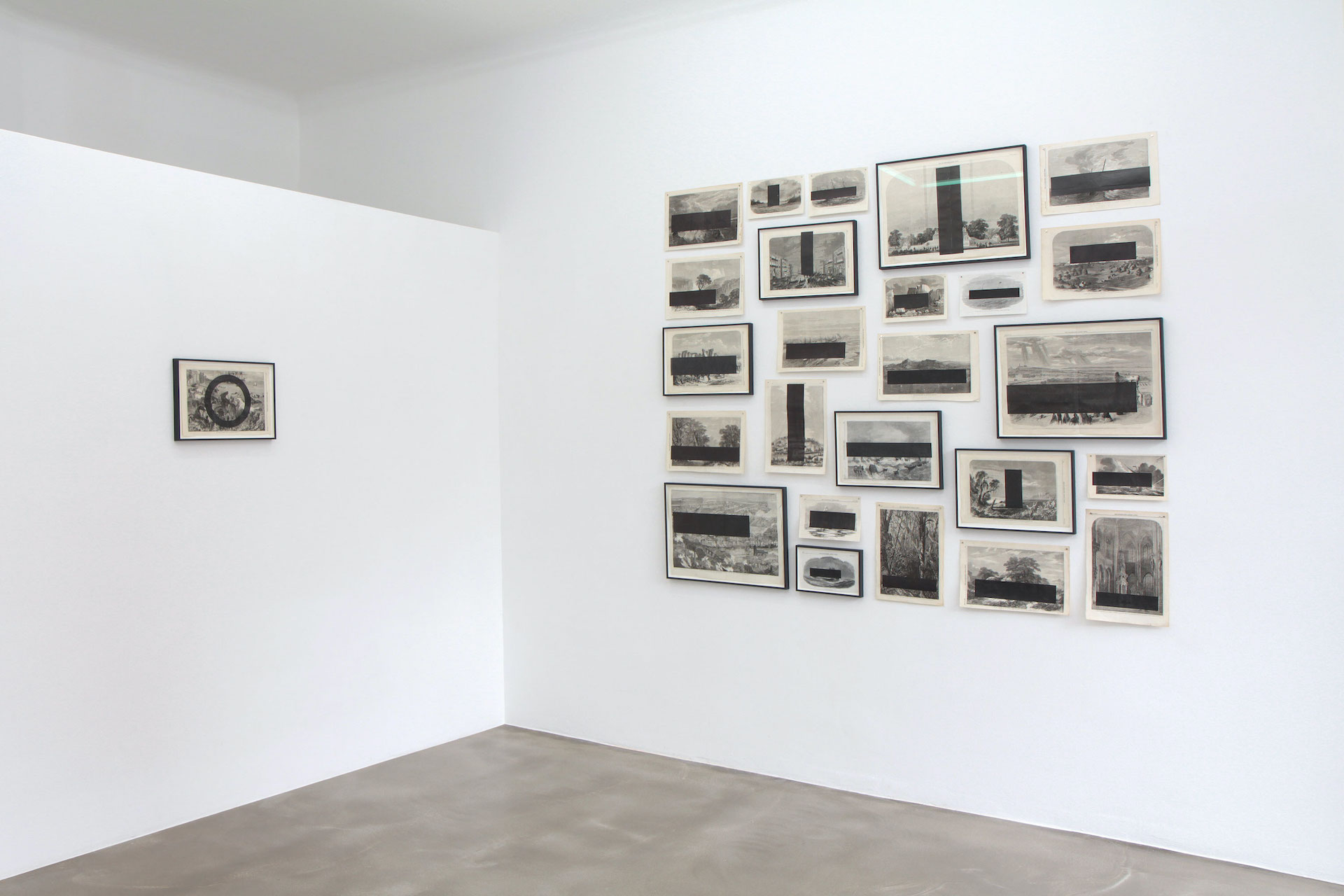 The edition marks the release of a series of works on The Illustrated London News, pen-plotter drawings over 19th-century engravings taken from the world’s first illustrated weekly news magazine. Kindermann´s publication is available in two different versions which focus on two different images whose titles come from the captions of the original The Illustrated London News images: THE HORSES` MORNING BATH AT CALCUTTA & LOADING SAND – PAS DE CALAIS: THREATENING WEATHER. The two images are opposite in nature as one highlights the main scene while the other puts the focus on the margins. In both cases, the final images are highly dramatic in their own way with the very loud and busy action of the bathing horses in the water and the dark and silent horse-drawn buggy on the beach.

The London Illustrated News publication is based on the same series of pen plotter ink drawings that Kindermann exhibited at The Living Art Museum in Reykjavik, ´Distant Matter´ with Katrín Agnes Klar in 2018. The artist has since been expanding on his interest in the similarity of hatchings in historic engravings and those used in his pen plotter drawings when he started to collect original historic engravings several years ago. “If you look in close detail,” he says, “you can find structures in 16th-century engravings that are very similar to today’s 3D mesh.” 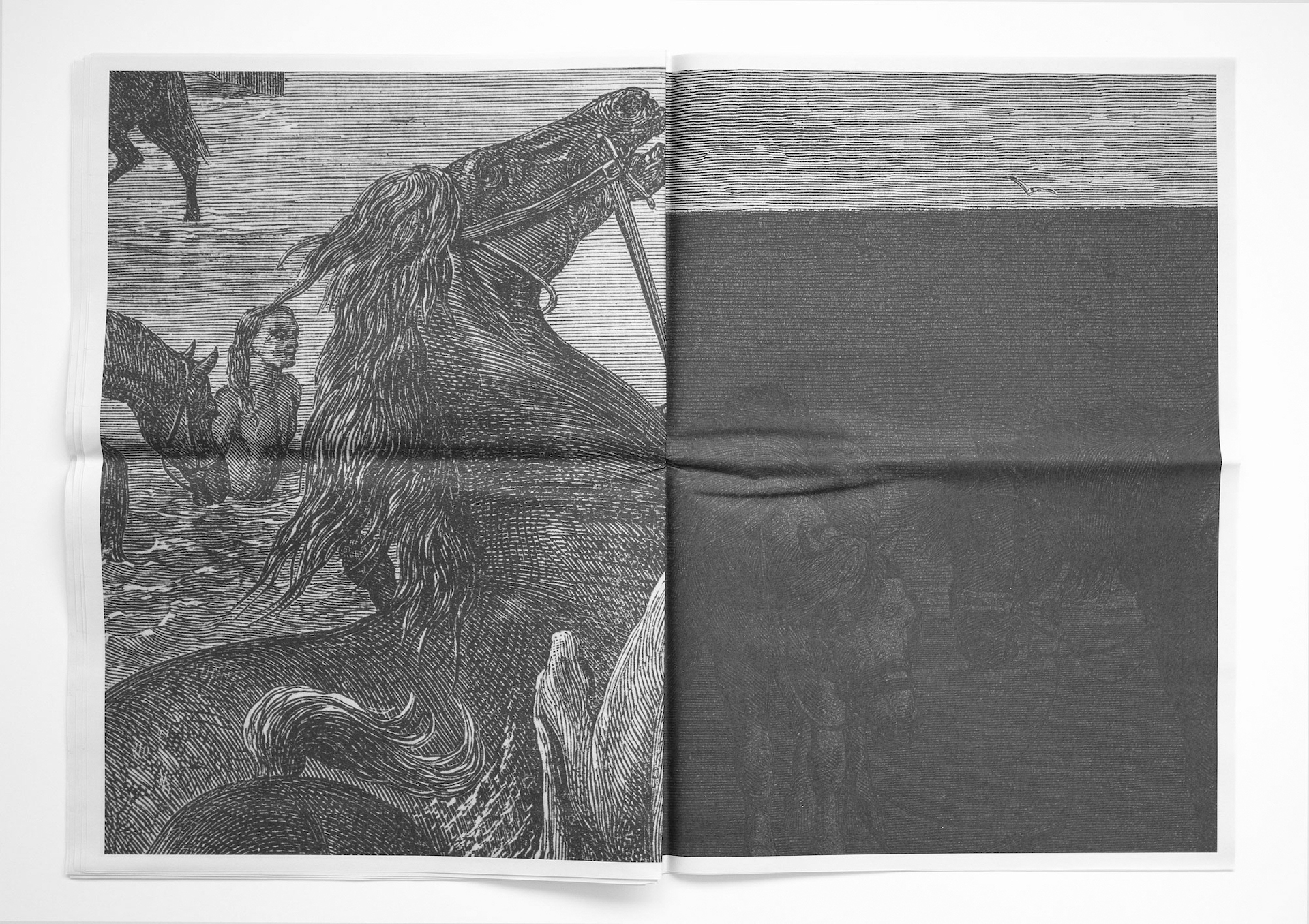 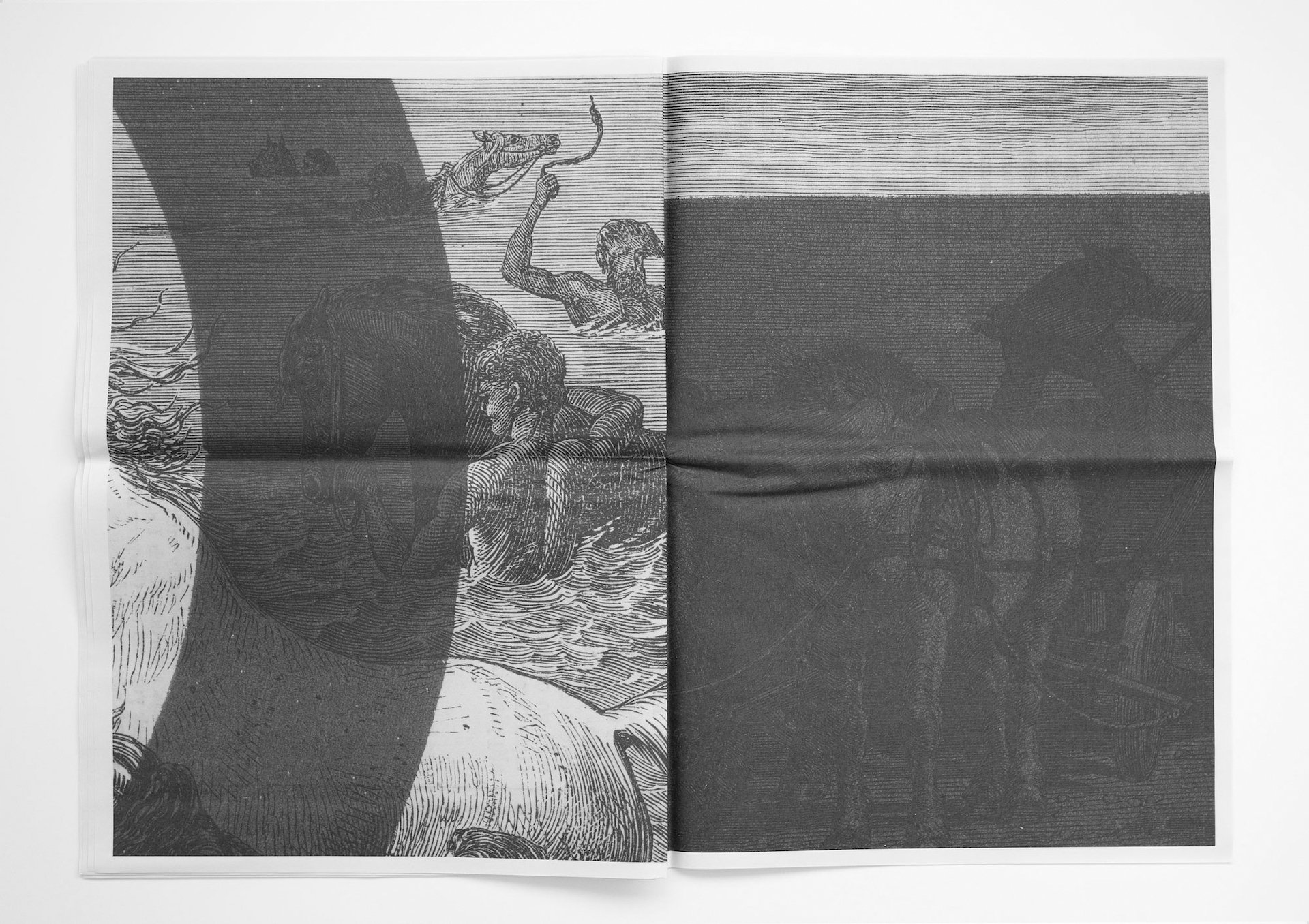 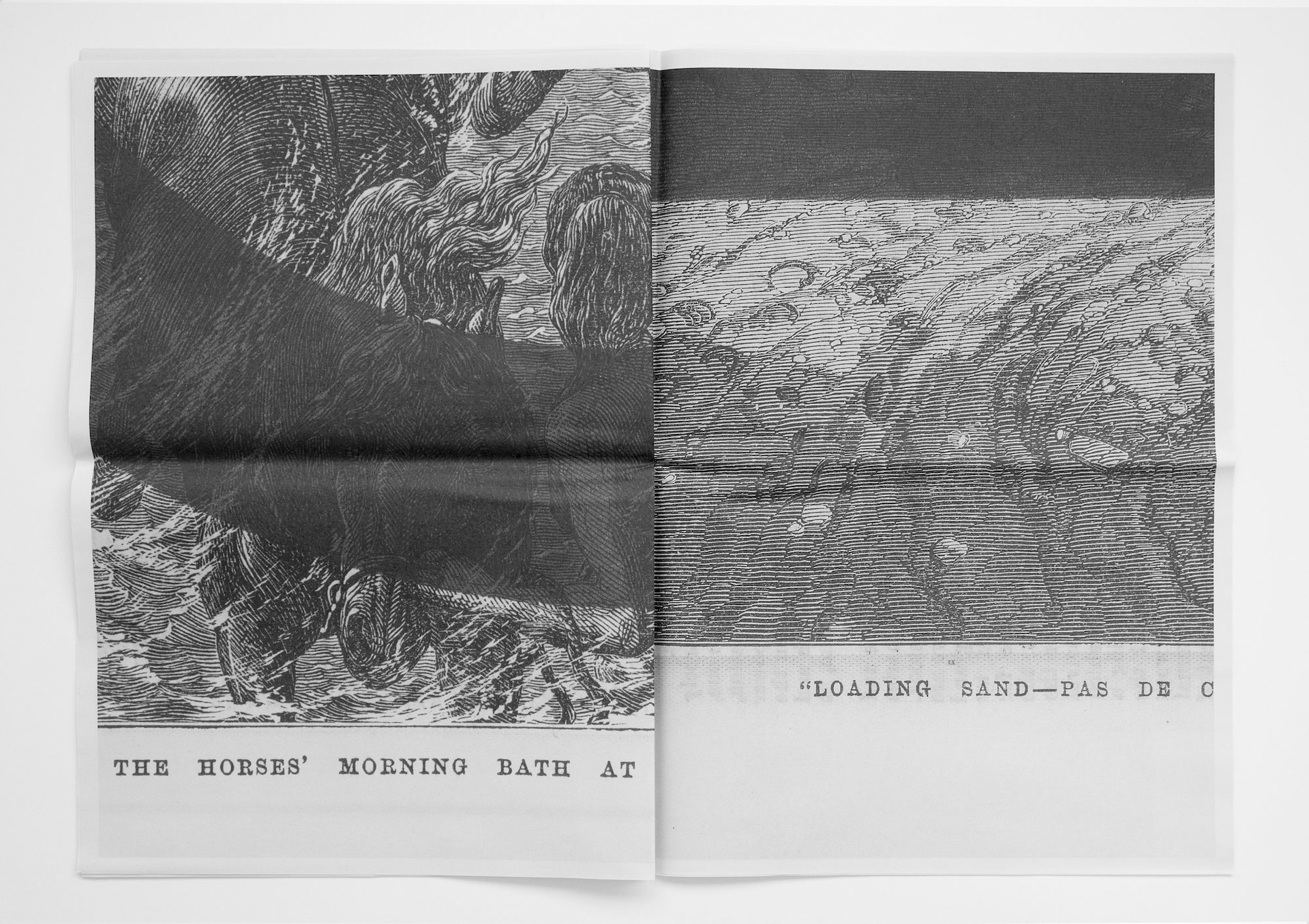 As part of his artistic process, the collection of historical material provides an interesting perspective on the changing techniques of image creation over time. When the opportunity arose to purchase a huge collection of original prints from The Illustrated London News it fell very much in line with these techniques of image creation as the Illustrated London News marks the beginning of mass media images, providing an incredible view of the continuum of the types of news images being consumed from then to now. Being the first global illustrated weekly newspaper, it marks a historic moment in media, building the foundation of the images we are now inundated with. “Flipping through the sheets in my studio, I often realize that there are in fact many similarities between today’s and the 19th century’s news images.”

It is these similarities that Kindermann expands upon throughout the previous series of pen plotter drawings over historic material which includes original engravings from different centuries, for example, early encyclopedias like ‘Cosmographia’, the earliest German-language description of the world, published by Sebastian Münster in 1544. ‘Cosmographia’ and other prints he has worked with come from publications that represent the state-of-the-art during their time of publication. And as has been the nature of the book since printing began, it showcases the apex of knowledge and technical possibilities for the time. Print culture represents the culture and credibility surrounding the book form that was especially crucial in Early Modern scientific works such as Münster’s ‘Cosmographia’. In Kindermann’s work, he uses the history of print culture to realize the role of visual representations as mediatory instances between practical knowledge and theoretical knowledge, using the interaction between images and texts to reveal the synthesizing potential of images to bring fragments of knowledge together to create a global picture. On many of the historical materials he uses, his overlaying pen plotter drawings are purposeful in guiding the information that is synthesized between image and text.

“Most pen plotter drawings on engravings are covering the main motive of the images which leads the viewers’ attention to the side scenarios of the original engravings. The black elements consist of fine grids that are drawn by the pen plotter with a black ink pen. Basically, they are very thin hatchings; or, contemporary media techniques overlapping historic techniques. I only made a very few exceptions where I highlighted the main spectacle of the prints through a circle such as in „The Horses Morning Bath at Calcutta“. On one hand, it can be good to break up your own rules, while on the other hand, it has to do with the images themselves and how they are constructed. I’m interested to see how the images are changed by my interruption.” 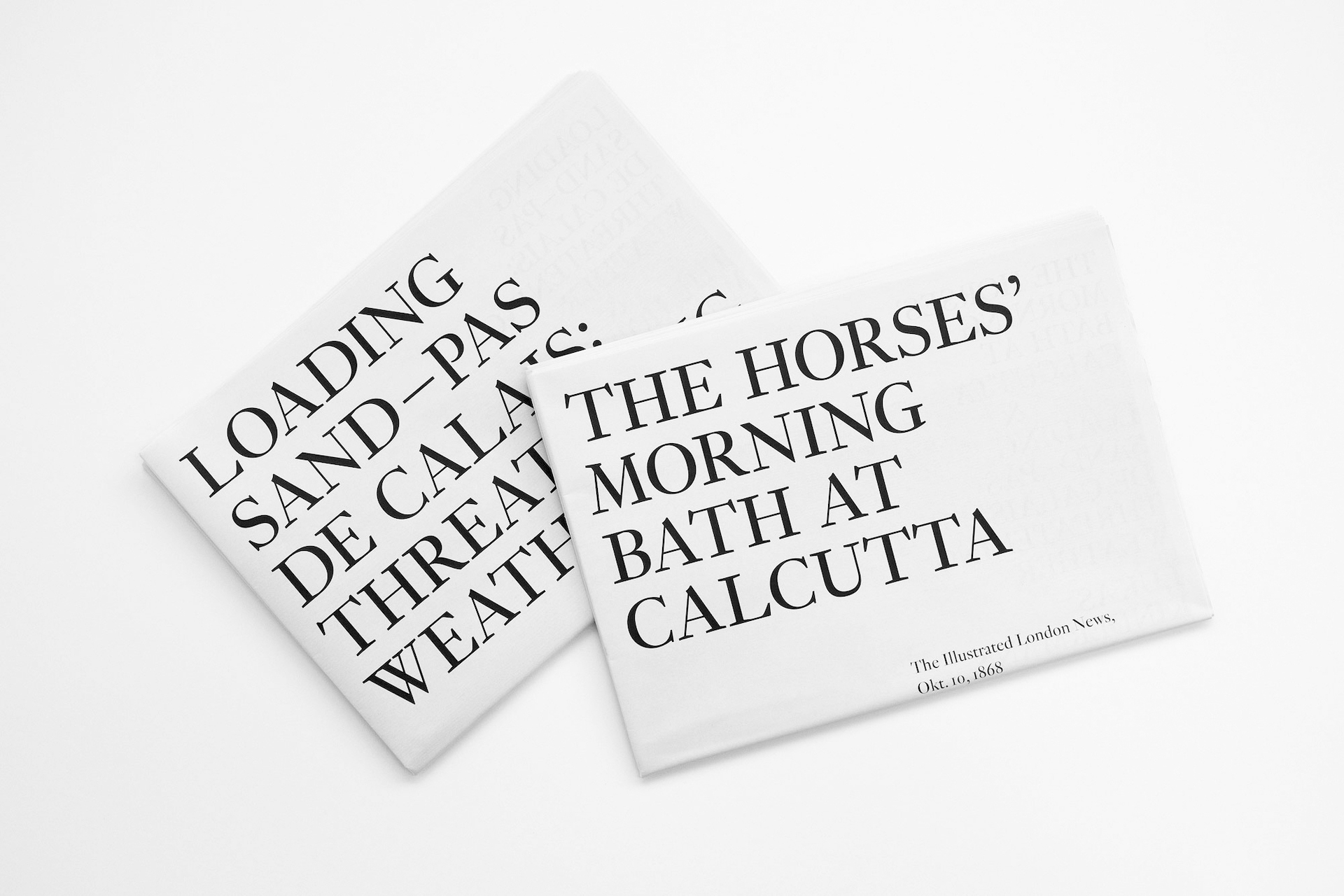 Working closely with Studio Studio, a design studio based in Reykjavik, smaller details were developed that one may overlook without holding the object in hand. For example, that the 100 copies are published with mirroring titles in two different versions of 50 copies each: one Version starting with „The Horses Morning Bath“ on the first page and the other version staring with „Loading Sand“. It is possible to take one version of the publication and order it the other way around so that the result is another version. The result is a highly transformable object, instead of a clearly defined book, which the viewer can read/view in different ways with a varying combination of image/text in each instance of the fragment vs. the whole. It is at once a newspaper, a kind of graphic novel-style book, as well as a large scale print to put on a wall. In the different combinations caused by the order of the sheets, there are accidental combinations that Kindermann left to chance, a conceptual approach towards the publication as an art object. 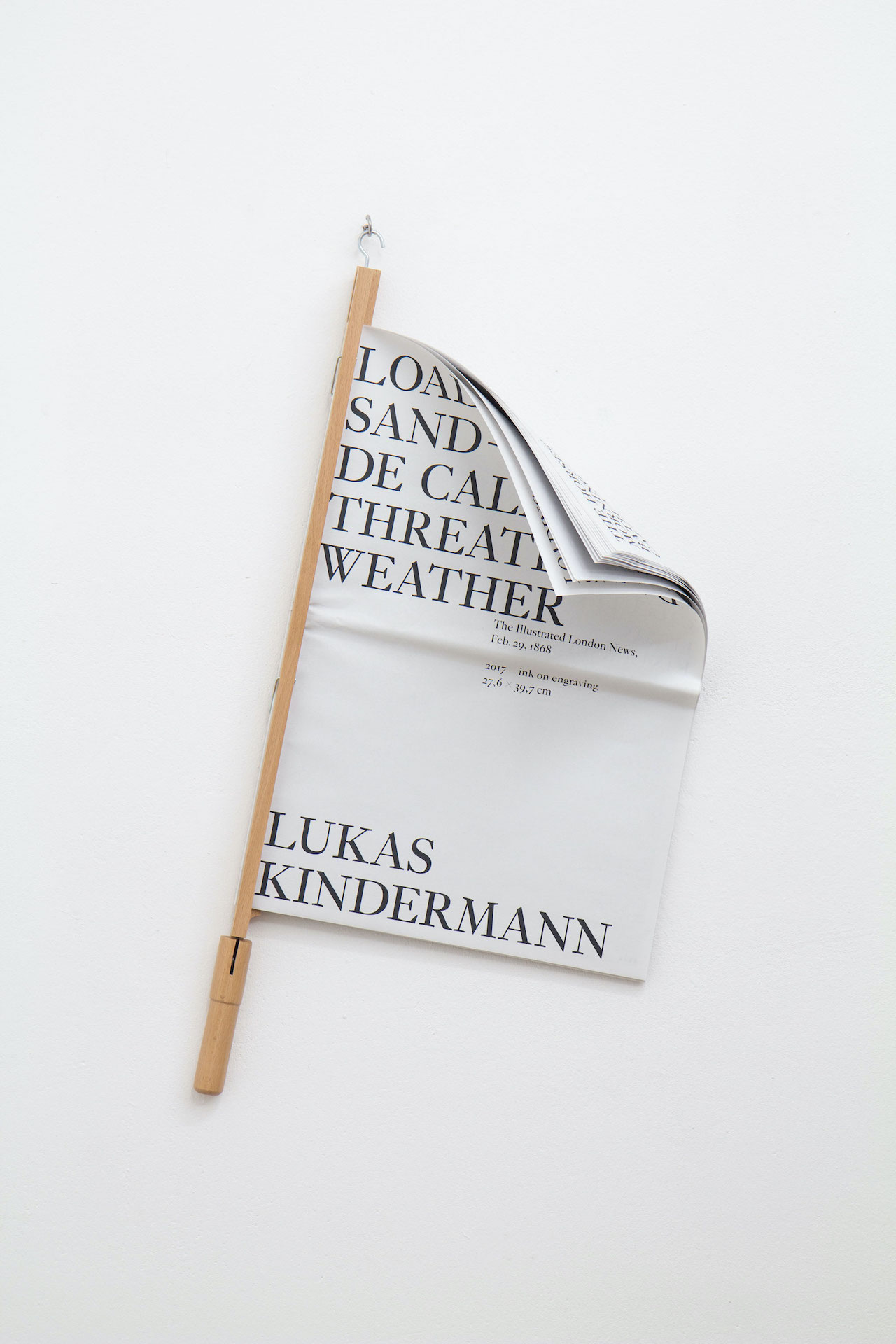 The publication has been printed in the UK, like the originals, but this time in Glasgow by a small printing press specialized in newspapers connected to the Glasgow School of Art. The publication is made possible with generous support by Erwin und Gisela von Steiner-Stiftung, München.

Lukas Kindermann, born 1984, is a Munich based visual artist. He graduated from the Karlsruhe University of Arts and Design / ZKM and the Academy of Fine Arts Munich. Among others his works have been shown at the Living Art Museum, Reykjavík (IS), Haus der Kunst, Munich (GER), Reykjavík Art Museum (IS), Badischer Kunstverein, Karlsruhe (GER), Kunsthalle Wien, Vienna (AT), National Centre for Contemporary Arts, St. Petersburg (RU), Centre Georges Pompidou, Paris (FR).