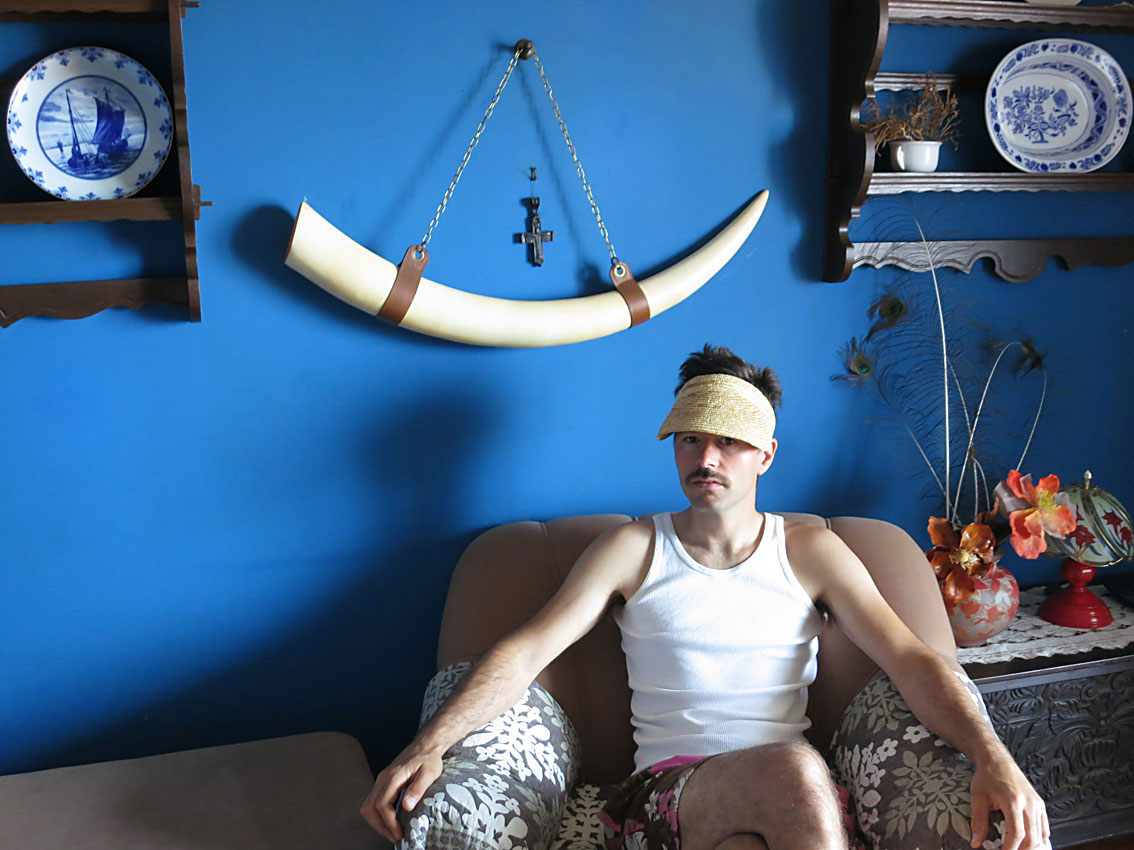 What is outside the circle of friends

The Icelandic art scene has the tendency of being somewhat constructed around the phenomenon of the ‘friend circle’. Certain artists are exhibited again and again in different context and the focus is on those that were raised up in Iceland and were educated in the local art school. Everybody knows everybody or are familiar and know what to expect from the usual suspects. It is thus like tasting a new culture of flavours to meet an Icelandic artist that one does not know about. Then the person is usually raised up in another country, has received their art education somewhere else or has lived abroad for extensive amount of time and is therefore out of the loop.

One of these happy moments happened at the book fair ‘Friends with Books’ that was held at Hamburger Bahnhof in Berlin in late 2015. artzine journalist was there to introduce her own book when she discovered that the strangers face in the next booth spoke Icelandic. 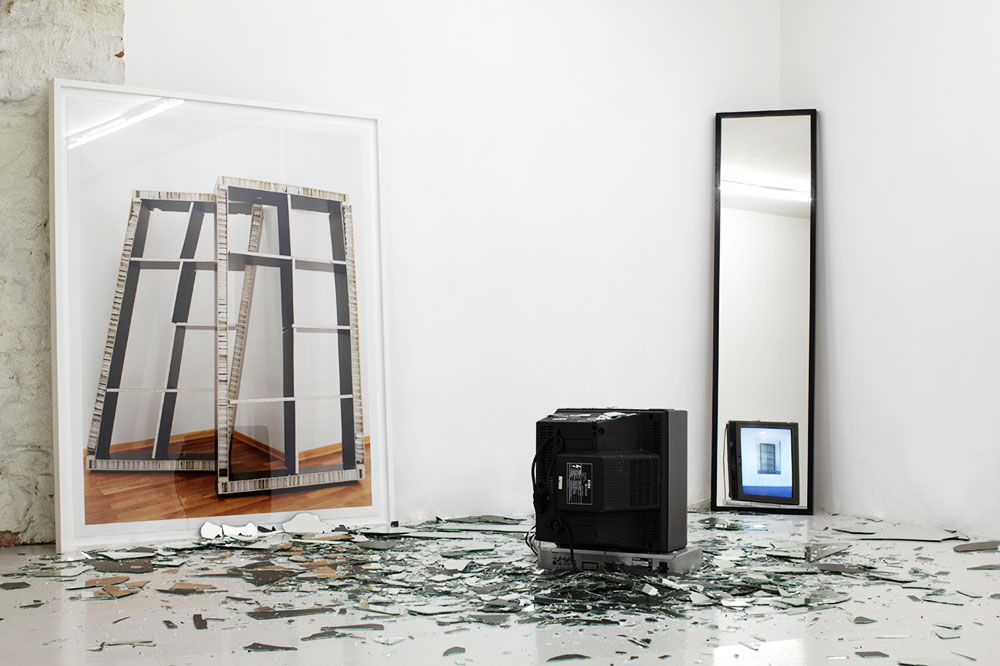 Sveinn Fannar Jóhannsson is a visual artist that is raised up in Norway and educated in Germany. He was the recipient of the Norwegian residency place at the renowned Künstlerhaus Bethanien in Berlin during 2015-2016. Sveinn has not been exhibited in Iceland but Friday the 13th of January the curator Heidar Kári Rannversson opened the exhibition ‘Normid er ný framúrstefna’ at Gerdasafn museum where Sveinn is showing together with a group of artists from the Icelandic contemporary art scene who mostly live and work abroad. At the exhibition visitors can view Svein´s works ‘Mirror with Shelves’ (2008), ‘Another Double Open’ (2008), ‘Untitled/Six’ (2008), ‘Untitled/Twelve’, (2009) and ‘Fragmentary Pieces of Intelligence’ (2011). In the exhibition text the curator questions whether the artists that are seldom or never shown in Iceland can really been said to belong to the Icelandic contemporary art scene.

Sveinn, tell us about yourself. Who are you?

I am an artist, curator, publisher and self-taught hobbyist gardener in no particular order. I was born in Iceland but moved to Norway and from there to Germany and then back and forth until recently settling in Oslo. At the moment I am in Reykjavík preparing for the above mentioned show NORMALITY IS THE NEW AVANT-GARDE at Kópavogur Art Museum – Gerdasafn, together with a group of other Icelandic artists of which many also are currently spread around the world. And just for the record: I actually did live in Kópavogur in a very early part of the eighties, it’s good to be back. 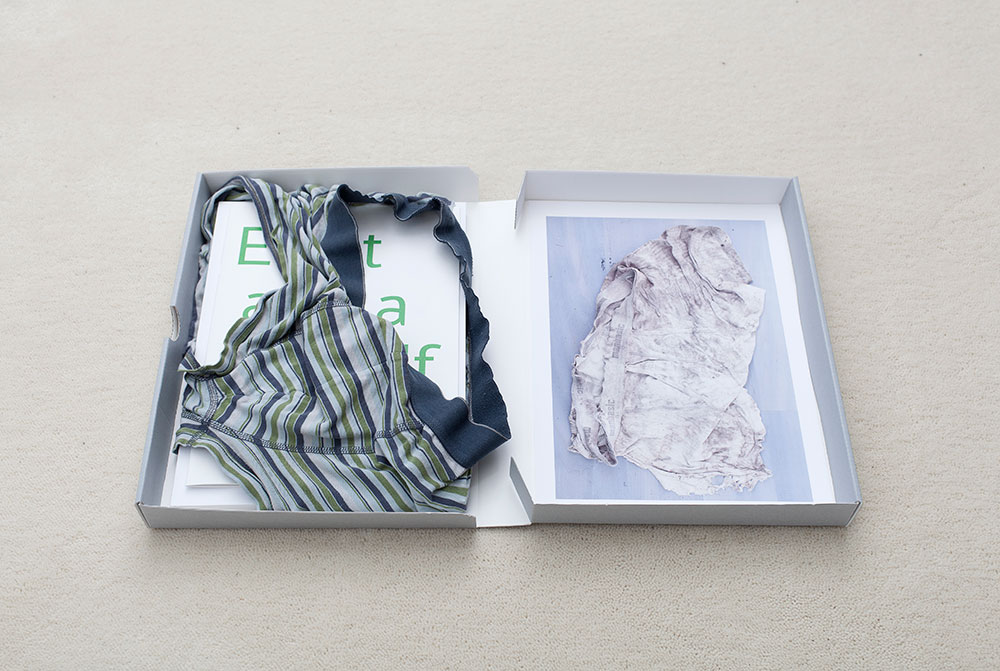 Collector’s Edition. A Sudden Drop + Eight and a Half Days, 2015. Artist’s books wrapped in found underwear. Limited edition of 30 copies with an original 30,6 x 22 cm color ink-jet print enclosed in an acid-free, cellulose archival folder, housed in a Hahnemühle archival box. Signed, dated („2015“) and numbered (1/30 to 30/30) on the back.

Was it in Kópavogur in the early eighties that you decided to become an artist or did it happen later? How?

Ha, ha, more like two decennials later. I grew up with a normal interest for sub and pop-culture and everything that goes hand in hand with that, including a broad aspect of music, film and visual culture. It was from there on I developed a keen interest in photography which gradually led to the more murky waters of visual art in general.

How did it come about that Heidar Kári ‘found you’?

I’m not sure actually, however I like to imagine that there are not many artists in the Northern Hemisphere escaping his horizon. 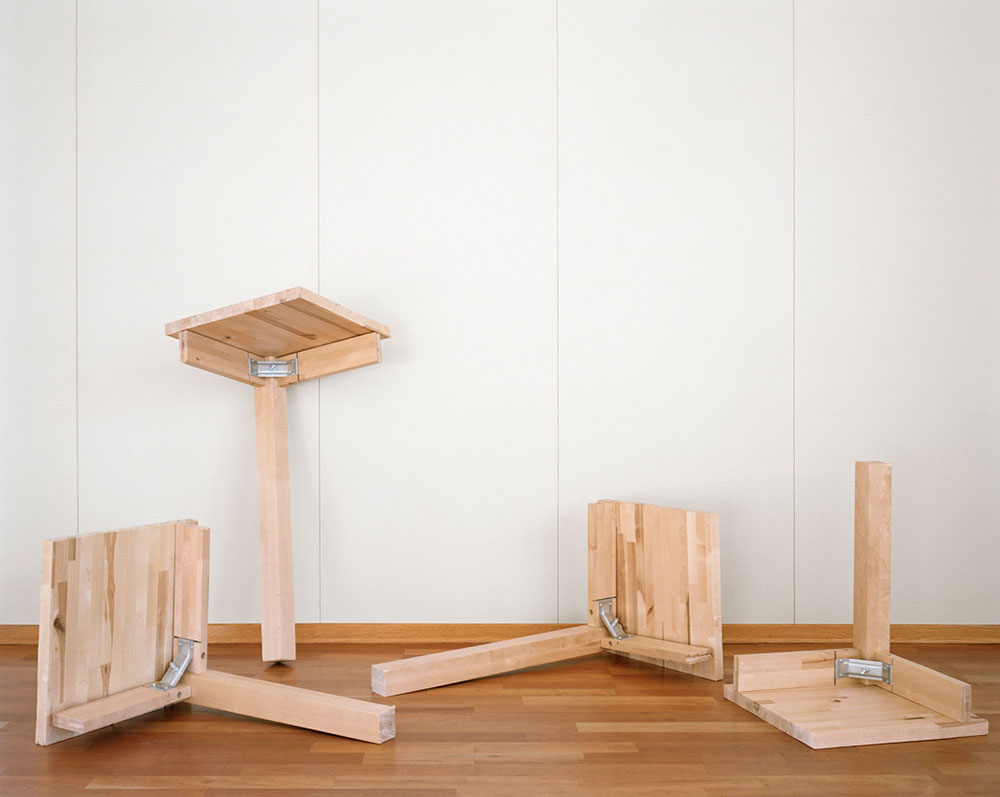 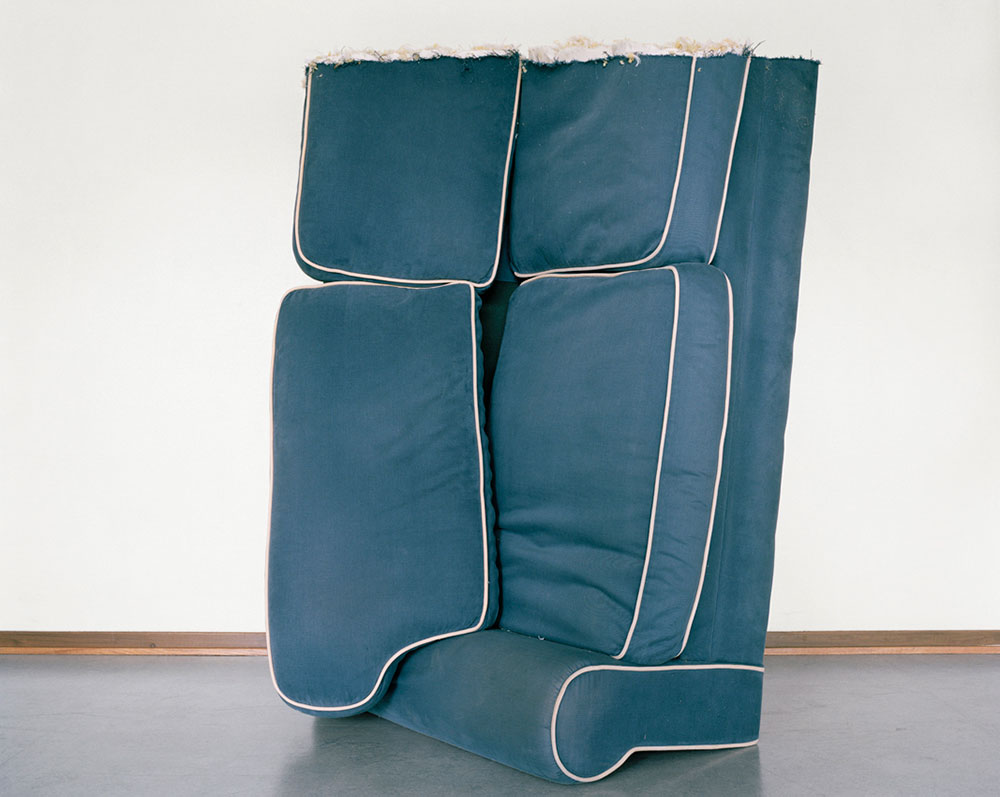 What I see in your art is that you are looking at society from the perspective of art. Any thoughts about that?

I do try to engage in a number of different projects and activities reacting on or against structures in the society, twisting and turning them, deliberately misunderstanding them or just purely sabotaging the way we normally go about with our daily business. On the one side it is about presenting an alternative view on some of the many things that we take for granted, but on the other side it also melts together with a more narrow aspect of our culture, namely art history and contemporary art culture. In the end you could say that I am looking at society from as many angles as I can possibly think of, but the results are objects or printed matter, some more ephemeral than other but nonetheless usually presentable in a contemporary art-setting. 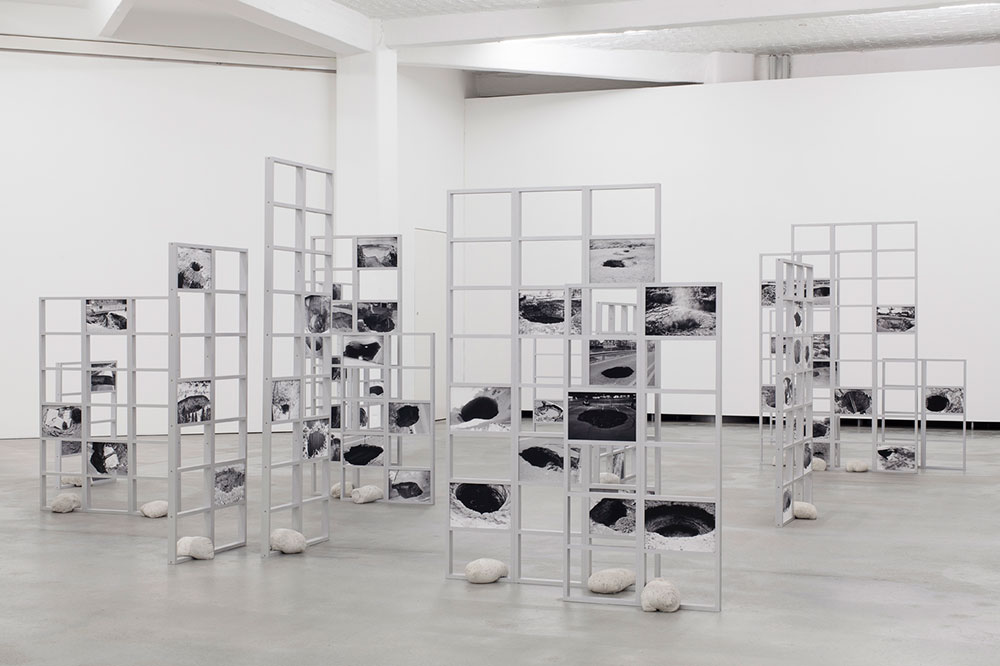 Talking about being ‘presentable in contemporary art-setting’. By that I imagine you mean material objects. What about immaterial labour and research. Could you describe for us your methodology? What happens before things start to materialise? What happens when material comes into play?

These things develop on different levels and within several time-frames. Some works or projects are more location and context-related than others and additionally I often have ongoing processes where materials and ideas are developed over time, sometimes over many years. This can be for example collecting found images or objects, and some of these processes find their way into a finished result, some never see the light of day. The materialisation of each work is developed together with the content and relates to each particular piece on its own premises. Often the idea will define the form and the format, but I try not to be too dogmatic.

Yes, dogmatic can be limiting. Have you tried to expand the platform that you show your art outside of the exhibition space context?

Occasionally I’ve taken the opportunity to install or arrange sculptures in public spaces, leaving them to their own faith and gradual decay in interaction with their surrounding environment. These works typically have a limited existence aside from a photographic documentation that at some point may or may not become a work in itself. 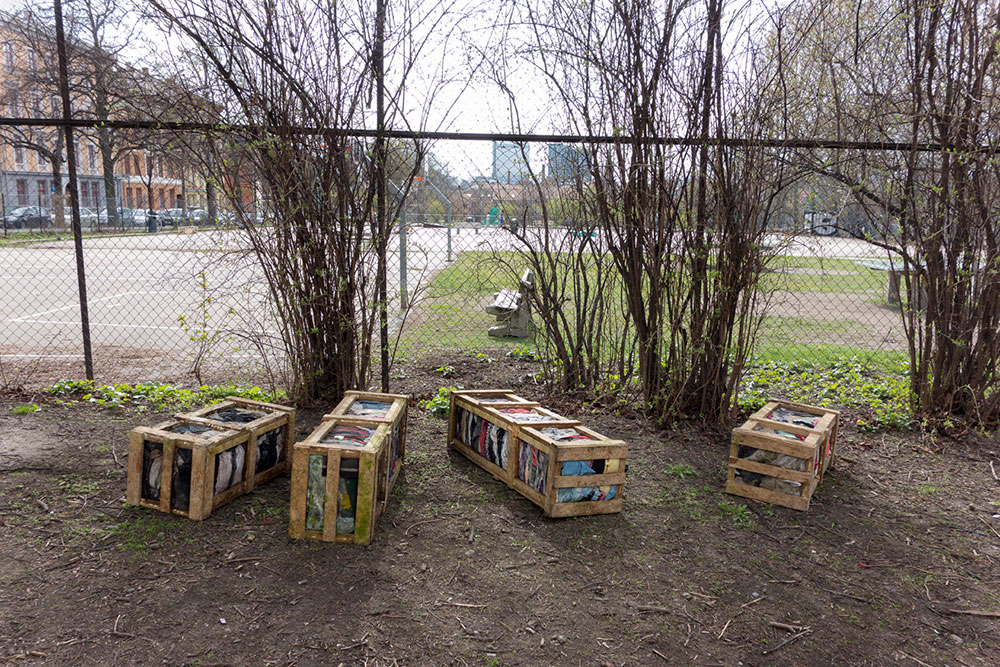 Tell us a little bit about your book publications. When did you start to publish books and why and are they available in Iceland?

There are a couple of early collaborative artist’s books created with colleagues a dozen years ago and then later I started working with Teknisk Industri in Oslo and also started self-publishing with Multinational Enterprises, my own one-man artist-run publishing house. For me the artist’s book is a classic genre just like painting, sculpture, photography etc., with its own history, limitations and possibilities. It is also an utterly generous medium allowing me to produce complex artworks with a great quantity of material by means of limited budgets and reach an audience on their own premises, be that their own private apartment, a library, an art book fair and so on. The artist’s book definitely lives and thrives inside as well as outside the white-cube. Some of my books can be acquired at the newly opened art bookstore Books in the Back, located in the back room of the Harbinger Gallery in downtown Reykjavík, others, you’ll have to import yourself. 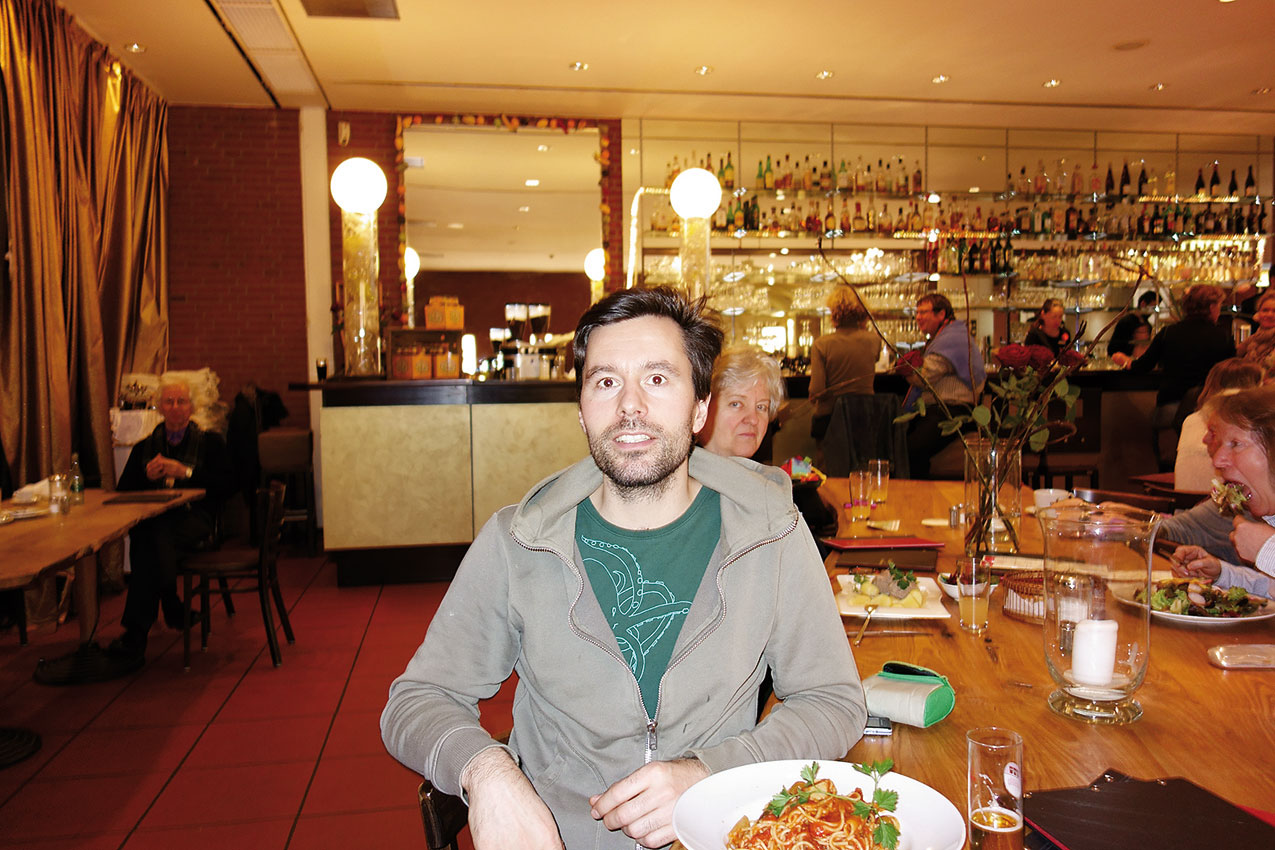 Portraits by Waiters, 2013. Page 48, me enjoying a nice meal in the Museum Ludwig, Cologne. Published by Multinational Enterprises
We thank Sveinn for his answers.

Sveinn Fannar Jóhannsson grew up as a child of nature at a bottom of a valley in Norway but then at the tender age of 18 moved to the big city of Oslo before embarking on an art education in Leipzig, Germany. He has exhibited solo around Germany and Norway and these days he lives and works in Oslo.