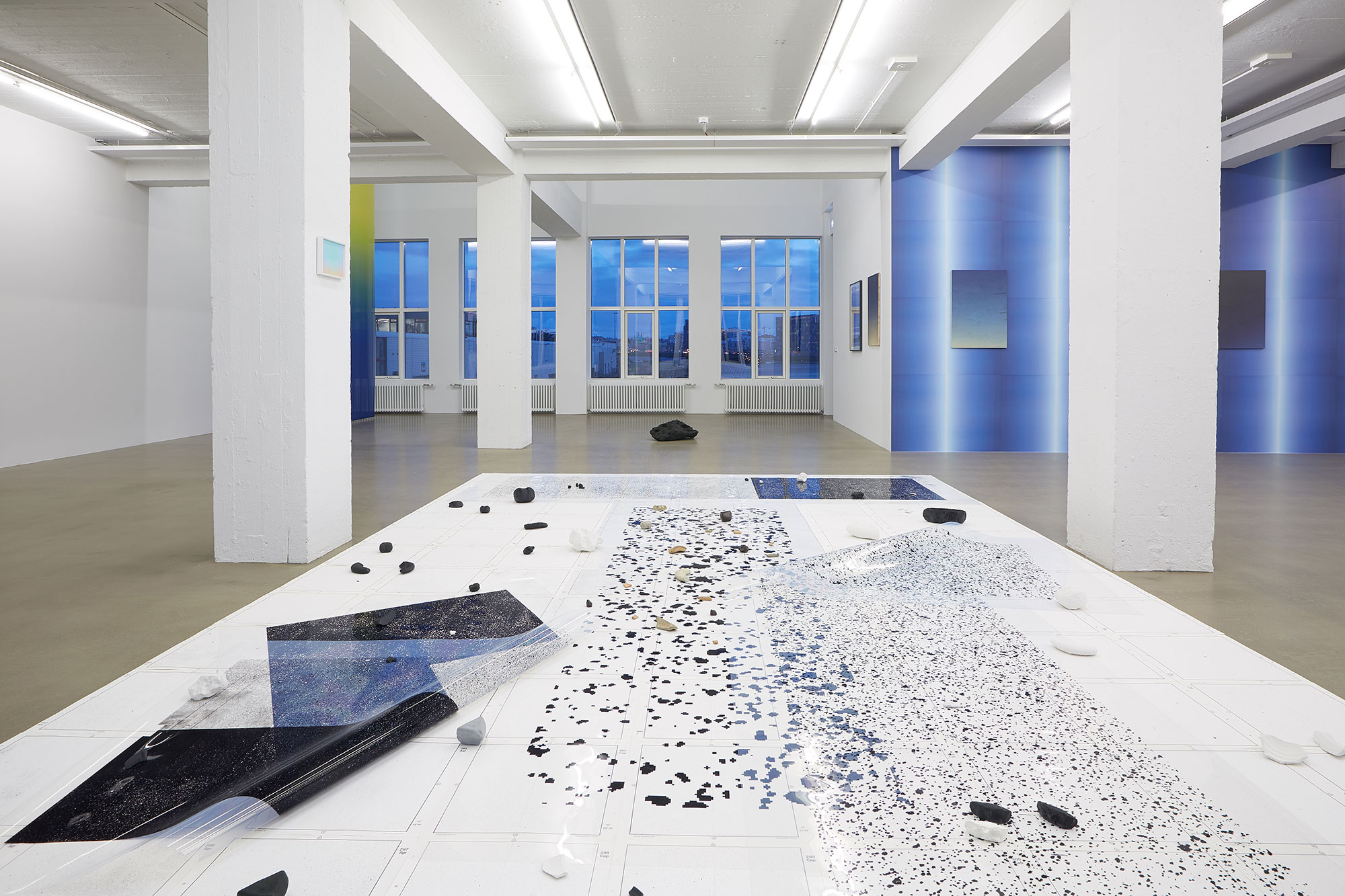 From screensaver screenshots taken in 2007 by Katrín Agnes Klar to pen plotter drawings on engravings from Baroque 1730 publications by Lukas Kindermann in 2018, Distant Matter, now on view at The Living Art Museum, takes that which is remote and brings it under close inspection.

The artists’ first exhibition together on this scale since meeting at the Karlsruhe University of Arts and Design/ZKM ten years ago is vast in its breadth of subject matter and material discourse. It is seemingly difficult to break into, as though your body were being asked to negotiate between the vast scales and ratios having a dialogue within the space. Am I infinitely small or infinitely large? Does that meteorite (1:1, 2016, Lukas Kindermann), 3D printed based on data gathered from NASA and lying on the floor, exist just as much in this exhibition as it does on Mars? Does a 3D print make the object a hyper-real version of itself, etched layer by layer out of silica sand and epoxy resin? Am I the distant matter at hand or does that moniker belong to these objects in quiet conversation? 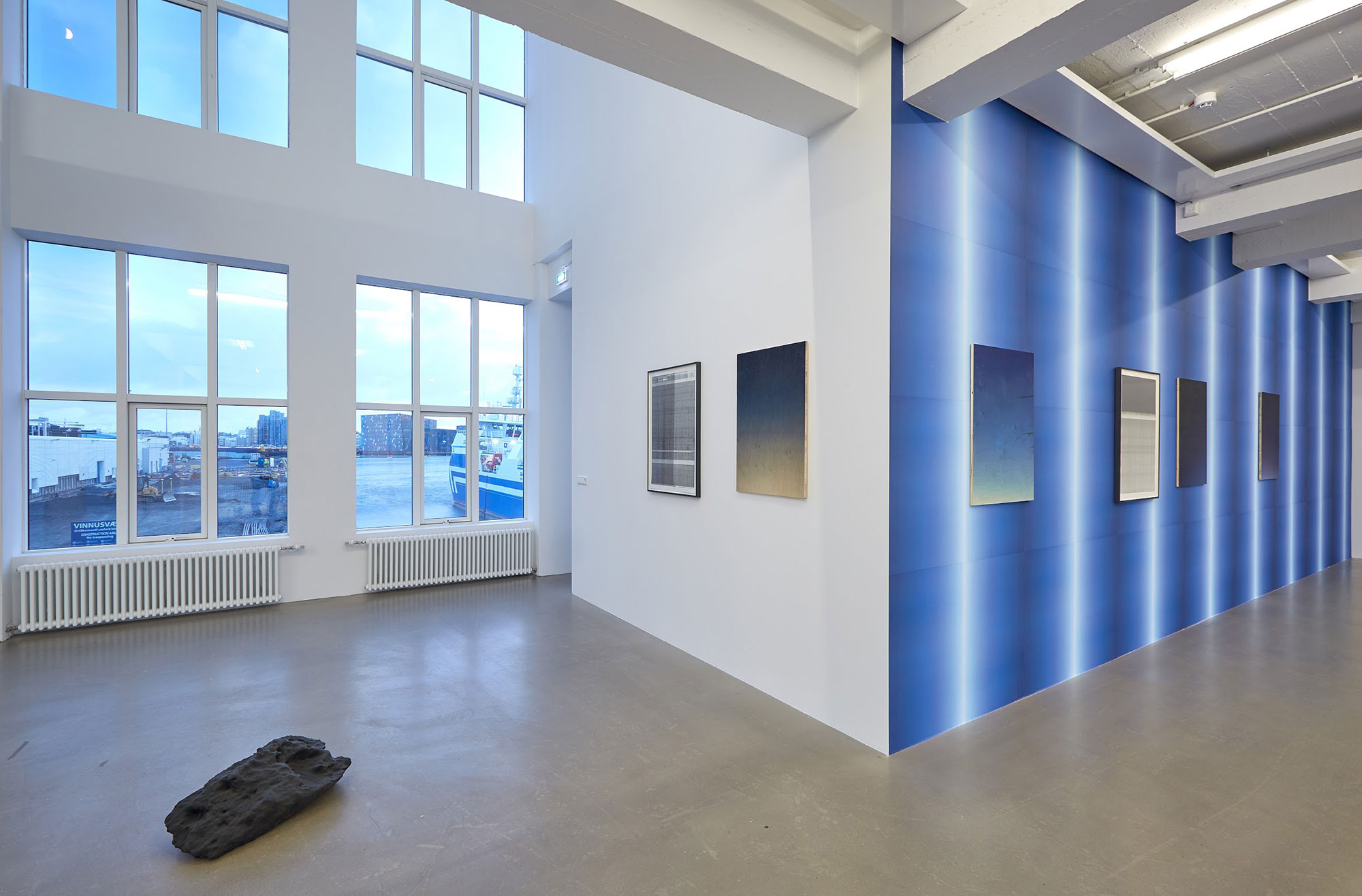 The conversation seemingly concerns the history of tools used in measuring the great distances between things such as the entire sky as in Lukas’ Atlas, 2018, in which an original copy of a photographic atlas stellarium by Hans Vehenberg is placed on a wooden platform. The viewer looks down into an inverted sky graphed into measurable squares which are scattered with both the originals of fossils, meteorites and roman shards as well as 3D printed carbon-silica sand and PLA replications. The conversation also concerns the small distances between things, as in the domestic and the everyday, as in the wallpapering table on which Katrín’s gradients of color are UV printed that could just as well be in your living room.

When placed side by side, these two vast scales at work allow the exhibition space to breathe – both in long inhalations and in short gasps – the body’s sense of scale likewise tries to keep up while the distant and the conjunct play in reciprocal motions, back and forth (like the movement of pen plotters, 3D printer arms, and the light beam from an image scanner creating a digital version of what once was held in your hands.) 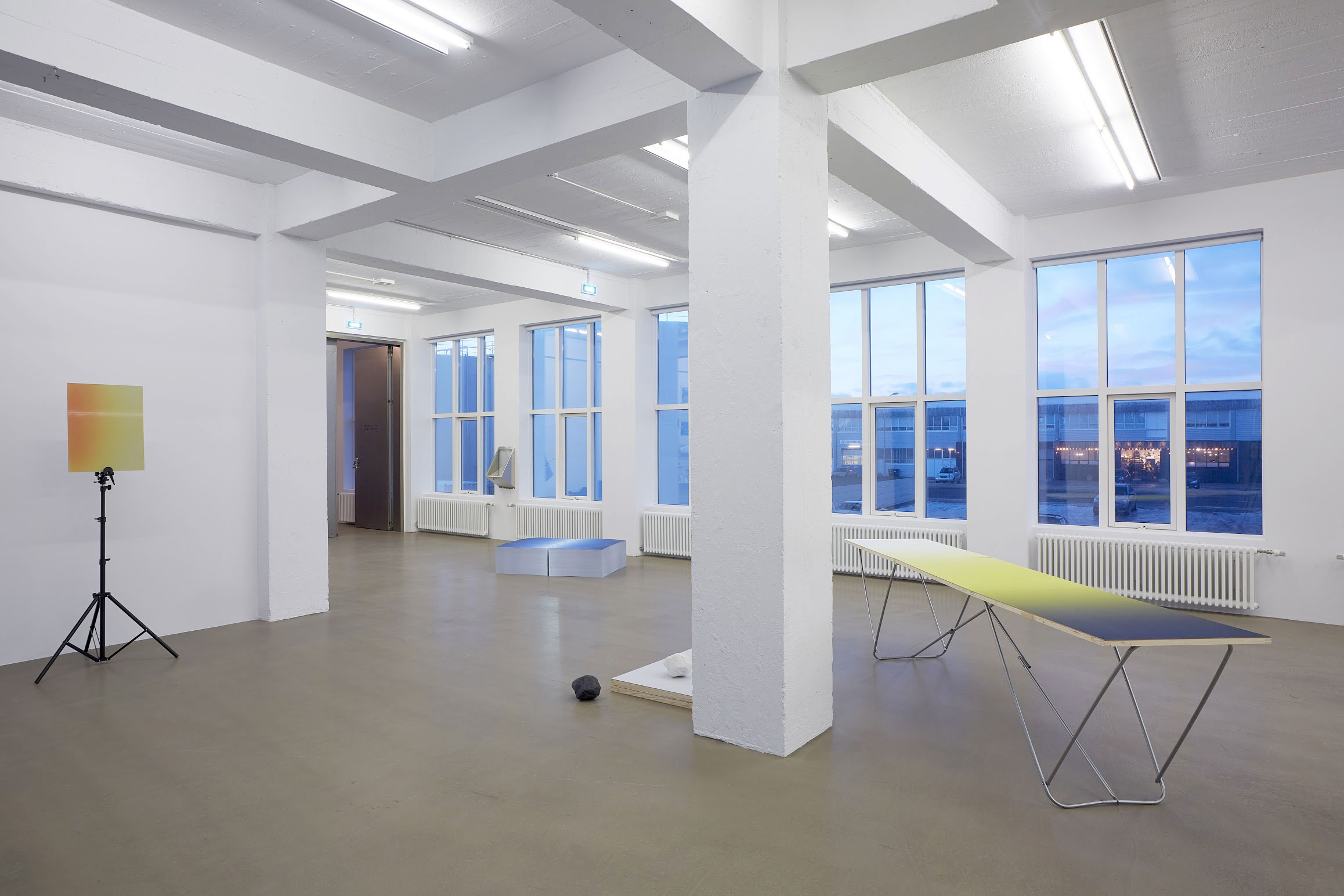 The quote about quantum physics that is all too easily misunderstood in layman’s terms comes to mind while walking around the space. It goes something like this: you are an observer located at a single point in space-time, an event. The singularity principle also comes to mind, something about how equations that diverge towards infinity are afterward completely unknown to us.

The exhibition can take you through a crash course in these ideas but leave you feeling very human in the end, returned to the land, so to speak, like the meteorite itself brought you back, even if as a 3D print – which will have to do, since that appears to be the direction of things as 3D printing technology infiltrates our biology, building prosthetics and completely collapsing the staggering Old World equation of measuring costs in material, time, and energy on a human scale. The exhibition can take you to these places, yet leave you, rather singularly, with a body of resources and tools to extend the senses into vast distances to be mapped, like tossing a rock into a well and listening to the echo to get an idea of the depth and fullness.

In conversation with Katrín, I am told that she and Lukas have always had a conceptual approach:

“The art movements of the 1960s and early ‘70s like Land Art and Minimal Art have been an influence on both of our work, just as much as a Pop point of view. Perhaps symptomatic of the times we are in, I would say young artists have a wide-ranging frame of reference. Essential for both of us, though, is the fundamental concern in creating good images. Creating an image has such a universal meaning and is so deep in global history, but everyone connects to it at the same time.” 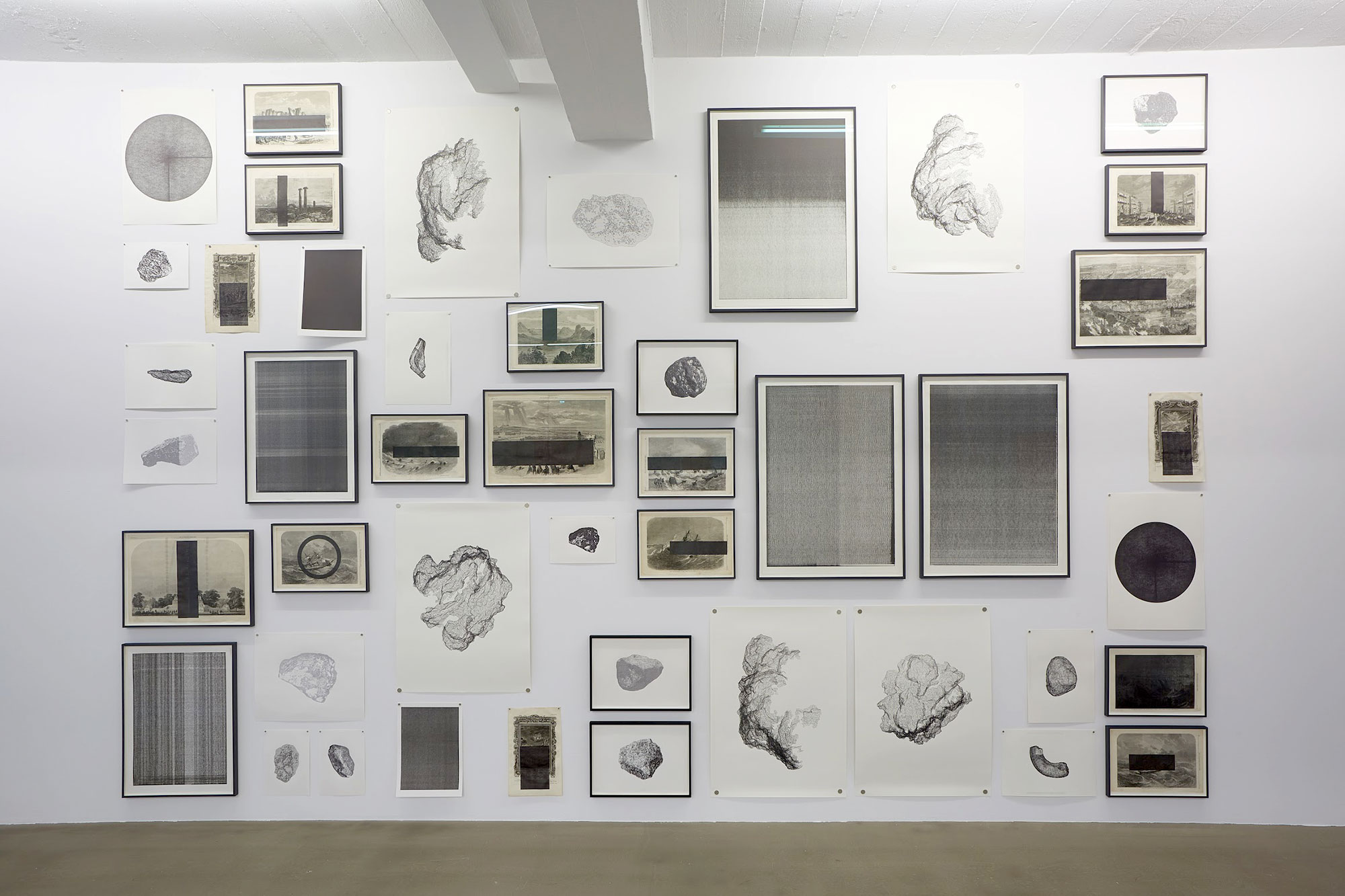 While seemingly a simple and straightforward concern, in the making of good images one can look at many overlapping cultural and scientific histories to see the depth at which one can travel in search for how to go about this activity. What makes it so difficult? Are there too many demands on the image in the 21st century or not enough? Consider: Is it aesthetically pleasing, in good resolution, conducive to the surroundings, making the best use of the technology that made it? “I grew up with an Icelandic art history background so the strong tradition of the influence of the landscape on the viewer has always been present. In all of my works,” Katrín says, “ I am imitating nature.” Perhaps that is the only real standard by which to judge a good image.

Katrín has worked before with the poster medium, one of many everyday objects she often includes in her work. On one whole wall of the exhibition space, a grid of posters called Blue Gradient (taken from airplane), 2018, is wallpapered to site-specific dimensions. The photo, indeed taken from the window of an airplane, shows a gradient stretching from dark blue sky to white horizon line. “Vice versa to the imitation of nature with computer-based tools,” Katrín says, “I simulate digital effects with material captured in nature, with photographs of the sky.” The photo is turned sideways so that the white horizon lines now touch other white horizon lines and are transformed into a wall of roving light photo scanners, giving the sensation that the whole room is in the process of being copied, digitized, turned into pixels, tossed into outer space and returned to something we can understand here in this room, like an everyday affair (like the cloud our phones and computers send data to, an everyday reality, so abstract yet mundane at this point.) 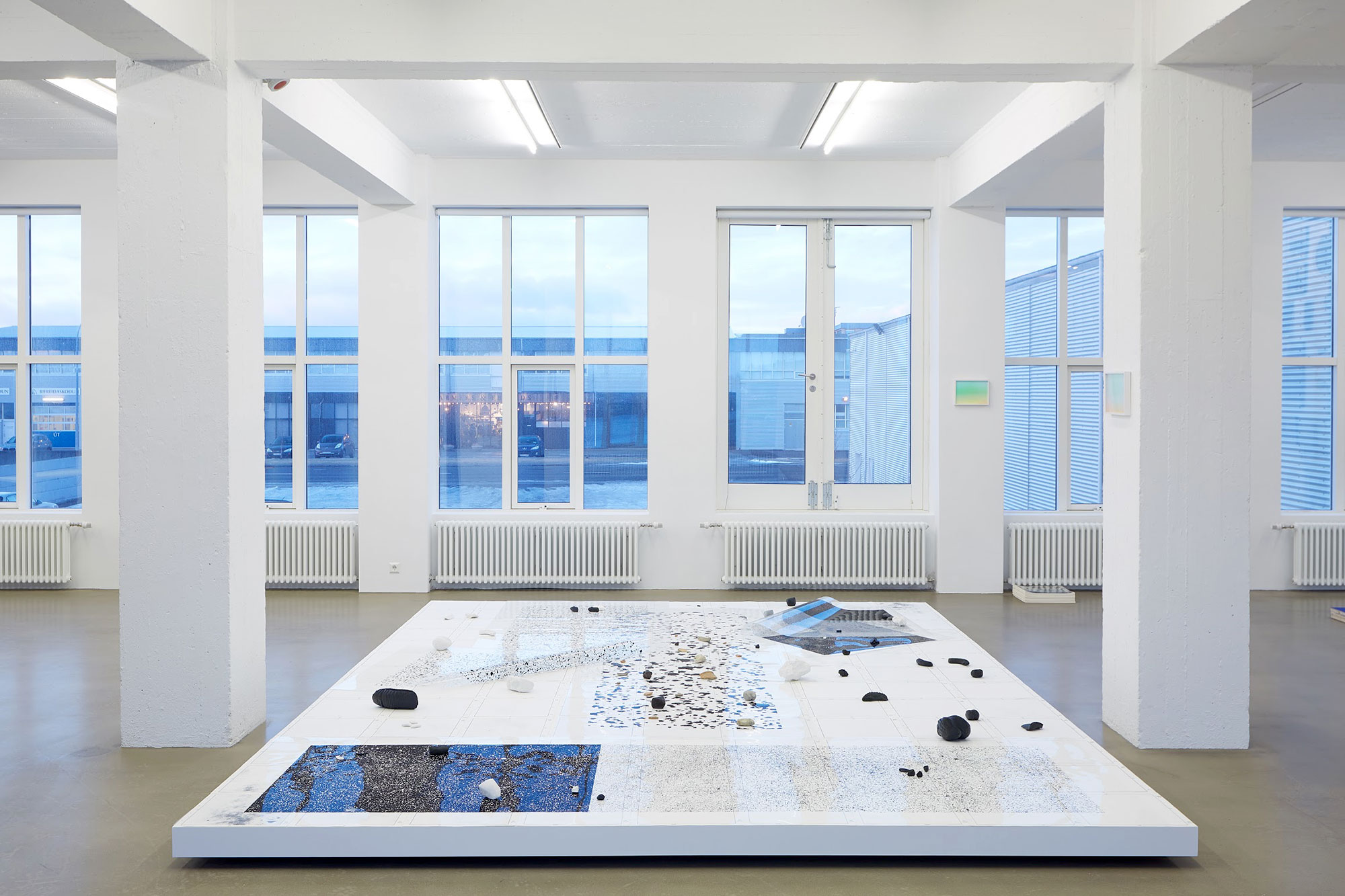 Works with UV printing, very common in advertising, are together with other techniques adapted from that field, definitely part of her ‘everyday’ oeuvre. However, unlike in advertisement, her images are based on a conceptual use of color. Boundary Colors (2015) is based on the color theories of Goethe who observed colors on the borders of darkness, which Katrín tells me, is, of course, sunrise and sunset. The piece in question is a lenticular image, meaning it changes depending on the angle from which it is viewed, displaying an almost time-lapse painting display of colors corresponding to those edges of darkness.

“A lot of these works are process-based, and because of the nature of the long-distance atmosphere, many of the final curatorial decisions were made on site,” added curator, Becky Forsythe. “There was this flexibility, from beginning to end, which is the way I like to approach exhibition making.” This open flexibility practically bleeds into the horizon, making distant matter an object on the table, observable from an airplane window or through your mobile phone, stretching across vast distances that could also be seen as quite minuscule. Formal elements connect the space through color gradients, scales, and patterns, like the structural layers creating a 3D print which build upon the other, making the intangible tangible. The space breathes, despite the large number of works in the room; perhaps it is the abundance of gradients of colors, allowing everything to exist on its own scale.