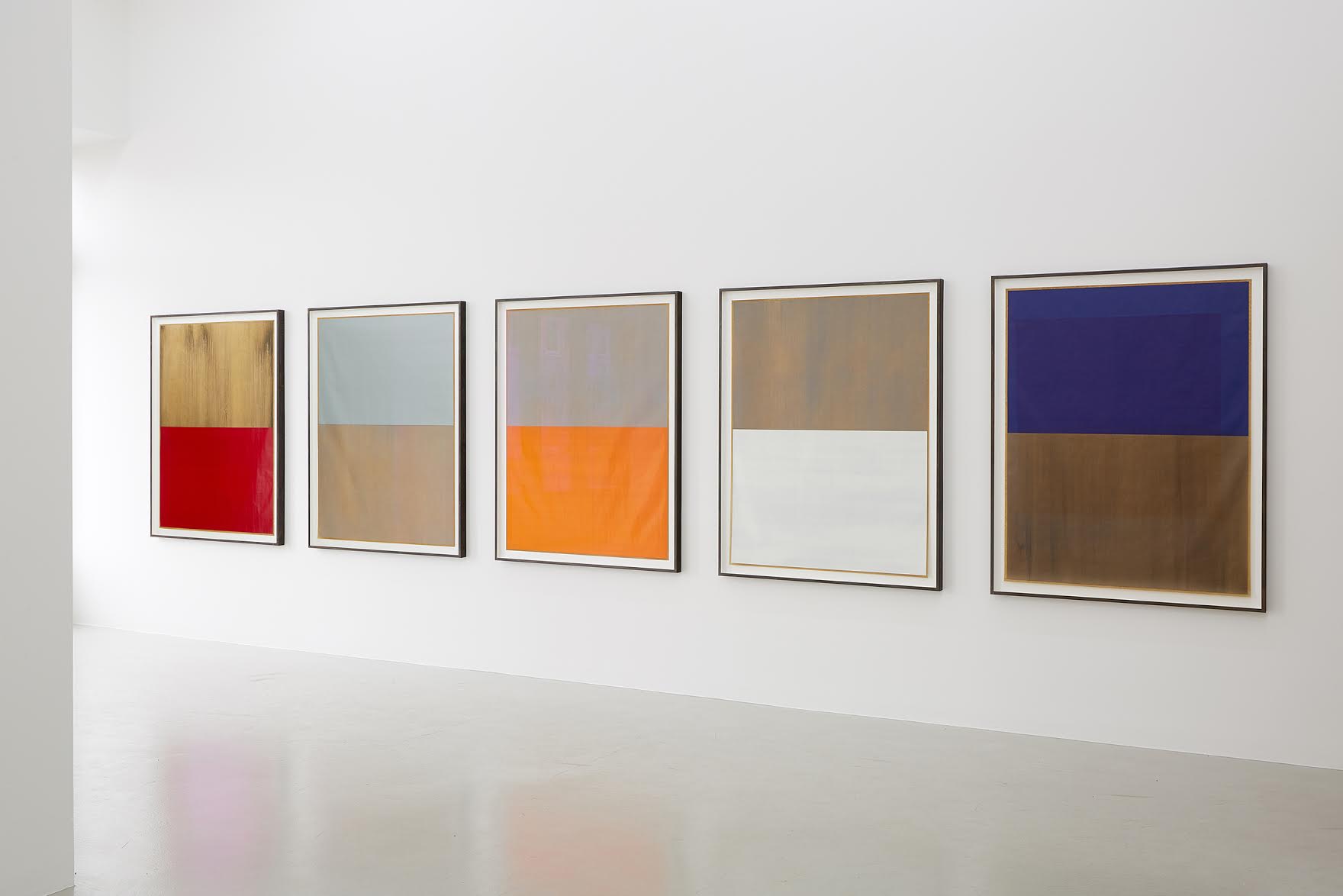 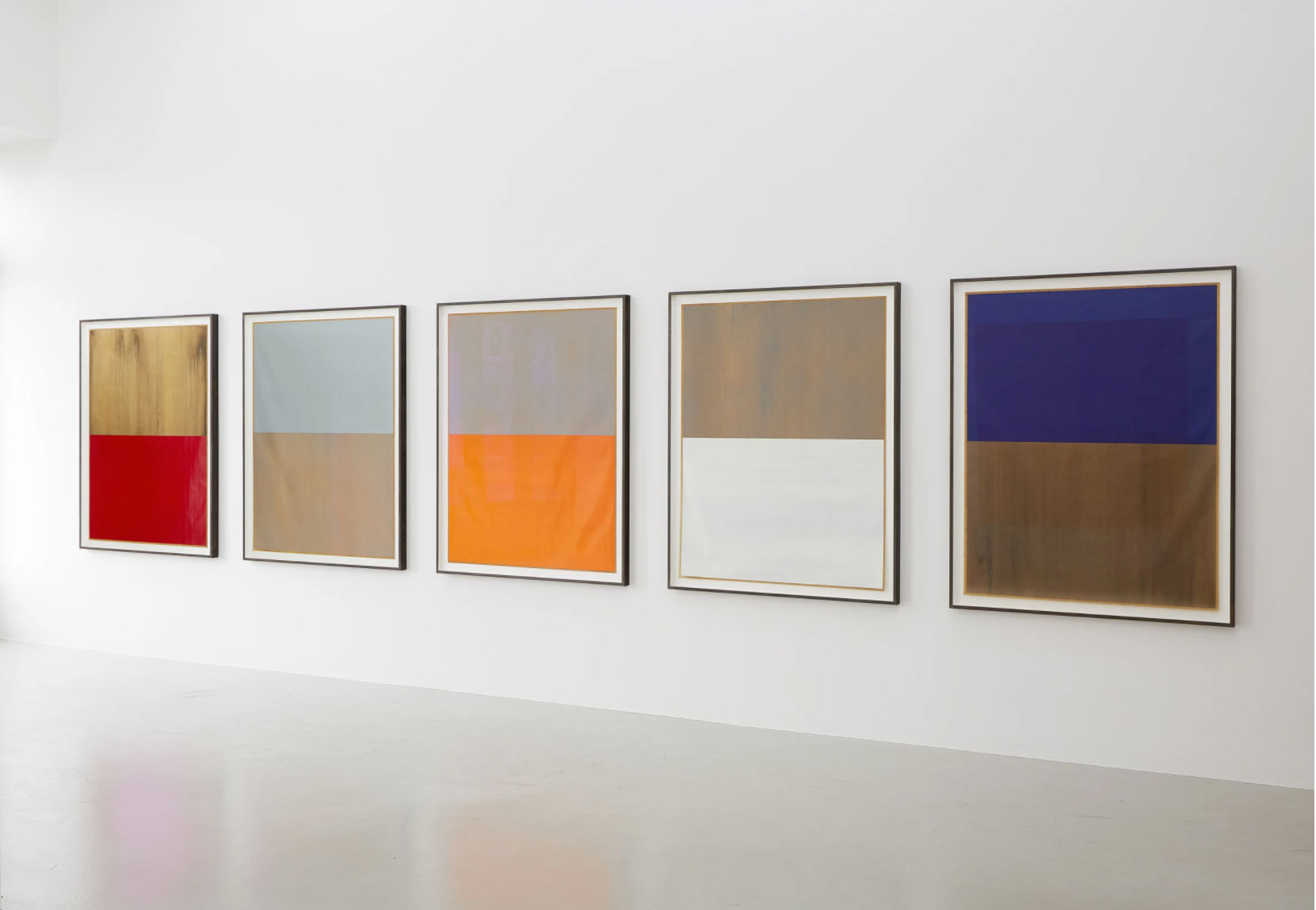 The Scottish painter, Callum Innes was born in Edinburgh in 1962, he studied at Gray’s School of Art and the Edinburgh College of Art. Erin Honeycutt sat down with him at i8 gallery the day of the opening to discuss his past and future work.

I was most curious initially about Innes’ views on the placement of his work within the abstract painting tradition and the trajectory of this tradition. He explains that abstraction has always been important to him; Barnett Newman and Mark Rothko made an impression on him as a younger artist, but more important than these figures in the abstract painting tradition is the language used to carry the tradition forward. Innes explains how his continuation of the language of abstraction became a process of removing reference from the work:

“What a Rothko, or a Newman, or a Blinky Palermo does is they give you a moment to pause. I like this idea of seeing something and reading it and having to look at it again and again. It’s that time where you pause and look at something and you read it… that’s what I like to create in my work. I think the earlier works are very important because you’ve got everything at once and it disappears. There’s nothing to take it forward in your head. I like the idea that I can work with an abstraction and try to make something that resonates at different times with different people. I’m getting rid of the figure in the work and I’m getting rid of all the references; I’m using that to be able to move forward. I try to create something by the way that I make work which is partly reduction, a creation of something that has it’s own intrinsic history, it’s own quality… like a fine object.” 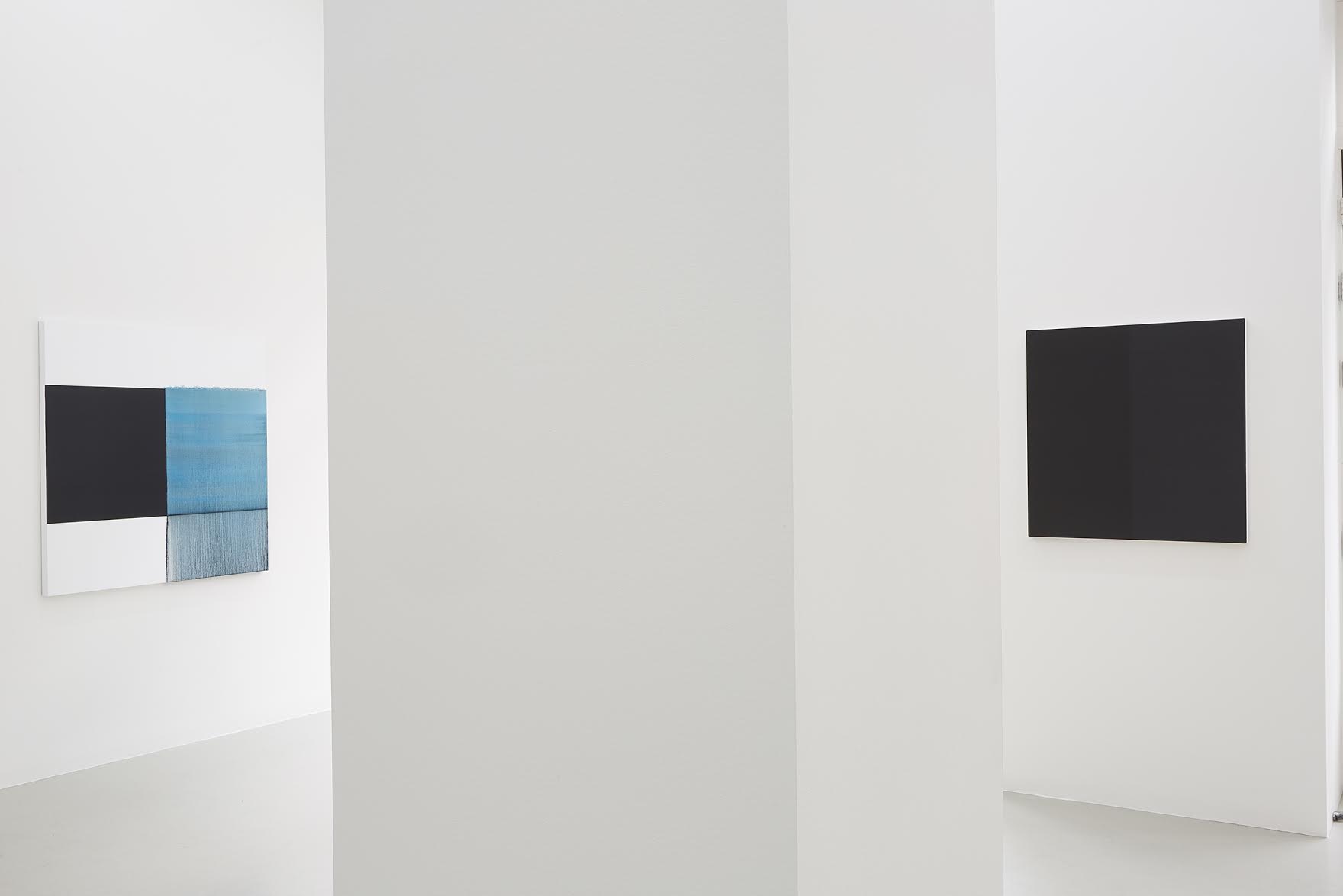 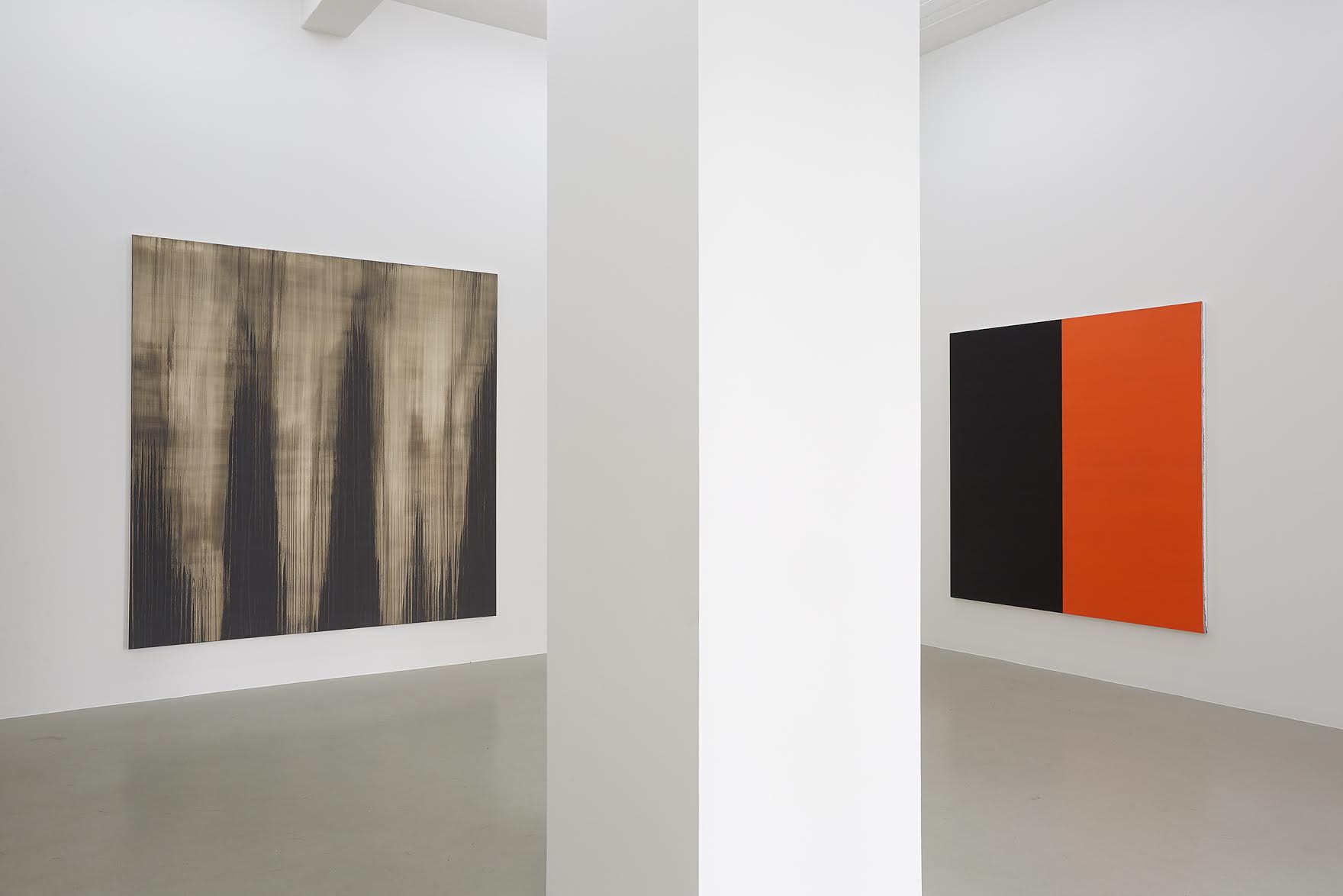 Would you say you are experimenting with the time-based quality of a painting?

“Well, it could be time based, but time is not sequential either. So when I started doing abstract works they were on oil paper, like the works out there now, and were tall pieces, 2×1 meters. I discovered an oil paper on which I could paint an image of maybe a stem or a leaf form or something organic and I could dissolve it. So the image is still there but it becomes part of the paper which I think is quite important. For many years I kept that methodology in my head for making work. Actually, it is all about gesture. It is all about physicality when you cross something and something hits you. I still see the paintings as being inherently figurative which sounds a bit crazy to people. It should retain a fragility and that’s partly due to the the way I make work. But you know, what appears to be straight is never straight if made by hand. So the line is always slightly off… with the watercolor I obviously tape things up, but it is never quite straight otherwise. I use tape to get a straight line because I can’t paint that straight, but when I take something off or take a division through something it’s always done by hand so it should have that possibility of failure for it to work.”

And the ‘unpainting’ phrase? You don’t mind it?

“Well, it’s a phrase that I didn’t come up with, but I don’t mind it. Actually, it’s about application. It is ‘unpainting’ because I start with an image in my head although I’m applying all the time. I’m applying paint all the time, as well as turpentine. The big painting in there from 2007 I made along with other paintings for a show in London; seven of them. I decided to make black ones for London which makes them more urban, but these are grey with yellow to make them slightly warmer. That painting looks like it’s been poured down, but it has actually been made from the bottom to the top. I disguise a lot so it looks like one thing but then something simple becomes complex, maybe not so much in that painting. If you look carefully enough in that painting you can see as I stretch I can’t make it quite to the top, so I actually work it to the top so I can bring it back down.”

The painting in question is Monologue TwentyFive. I recalled my own engagement with the painting and how the painting’s verticality arrested the space of the viewer.

“Talking about verticality and space and how you step into space… I remember a show I did years ago at the Pace gallery in New York City. There’s something that happened in 1990-91 where people would try to jump into moving elevator shafts. It was a craze. They would wait for the elevator to come up and jump at the right time. But the idea of expectation, of waiting and not knowing where it is. So if you do that and have this line from top to bottom there’s that slight feeling… I’d like a painting to make that feeling of hesitation; is it a void or a solid? It explained the idea that when you make something, you make it visual, but where does it sit?”

Innes’ simple yet complex engagement with the painting speaks of these kinds of suggestive moments. In reading depths across the canvas, we orient ourselves spatially. Space in his canvas becomes a playing field with unexpected proximities…

“I play with space. I had this exhibition in October with sixty or so works in a big place that terrified me. I was asked if I would consider making wall paintings which I’ve never done before. It was at Dupont in The Netherlands. They’re the same size as the paintings outside, but we wanted them slightly bigger. We made two rectangles on the wall and prepared the wall. We painted directly on the wall but within the rectangle we’ve gessoed it, so it’s a flat surface. And then each rectangle has a very gentle curve on one side to make the whole thing pop. It still looks like a rectangle, but the curve is so slight. So it sits like a portal. You don’t know if the space is behind the wall or outside. So you can do this with color and forms. You can just see the pencil line how it comes off at the corner. It’s enough just to disconcern you. I like making things that disconcern people.”

Innes also launches a new book, Edges, at the opening. Speaking of reading the space of the canvas, I considered the extent to which the whole painting becomes an edge of sorts.

“That’s right. You can have the whole history at the edge. It’s interesting when people see these watercolors… you put two colors together, maybe blue clouds in a rectangle then I put tape around it, then maybe a solid orange, and then with water and brush and the weight of the hand the colors mix. Sometimes you don’t know what is going to happen. But you create and when they really work, these beautiful luminous spaces appear with the unique color held by these edges. I thought of doing photographs for this little book published by Ivory Press, but I decided to just do the edges. We took photographs of all the edges. Then I asked the author Colm Tóibín, who wrote Brooklyn, to write something for it. He is in that tradition of Joyce… not quite, but everyone calls him the next Joyce. He wrote a passage about light and edges.”