I met with Sara Løve Daðadóttir, Josefin Askfelt and Emil Willumsen who are part of the team behind Pavilion Nordico in Buenos Aires, a project established in early 2019 which functions as exhibition space, residency and art centre for Nordic creators. The project aims at creating connections between the Nordic countries and Argentina, facilitating the encounter of these two different cultures and promoting cooperations and exchanges between Nordic and Argentinian creators and professionals.

Ana: First of all, why did you decide to bring this project to Buenos Aires?

Sara: This is a question a lot of people ask, especially Argentinians. What is so special about Buenos Aires? Well for one, it has a very rich cultural scene — you could compare it to Berlin some years ago. It’s very lively, with a lot of things happening and a lot of independent spaces and temporary spaces. But also it has a real infrastructure when it comes to art and culture. There are many big private and public museums and international galleries. These are perfect circumstances for a project like Pavilion Nordico.

Plus, Buenos Aires is one of the epicentres of the Spanish-speaking art world, and one of the things we wanted to do with Pavilion Nordico is to create bridges between the Nordic region and different international regions. There’s a divide between the English-speaking and the Spanish-speaking art world, and the Nordic region leans more towards the former, so we wanted to see if we could connect them more. Oh, and then there was also a lucky circumstance that made us start the project in Argentina. Now we are already considering expanding the concept to other regions! 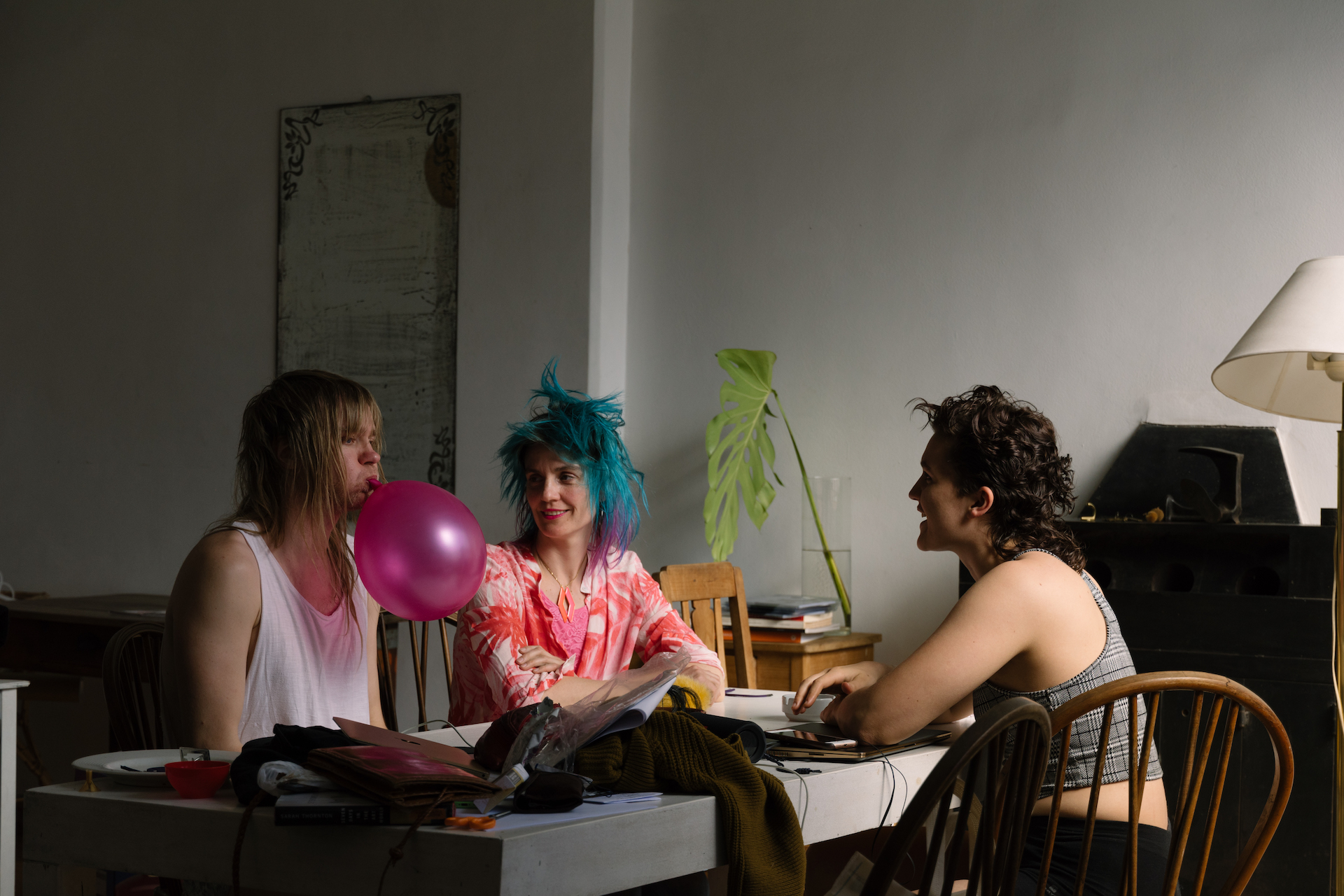 Hyper Hyper aka Kolbeinn Hugi and Franzeska Zahl being interviewed by PAVILION NORDICO’s Nele Ruckelshausen at the residency in Buenos Aires. Photo: Dagurke.

A: This is quite a big project, did you get any funding to run it and develop it?

S: This first year was our “pilot year”. It was meant for us as a period to test out the concept and find what works and what doesn’t. For this, we received generous funding from the Nordic Culture Fund and The Nordics, a new initiative by the Nordic Council of Ministers. For our tour of the Nordic countries later on, we also receive some national support, for example from the Iceland Art Center and Myndlistarsjóður.

And of course, all partners and art professionals we have collaborated with all have put in a lot of time and resources. Without them, the project would not have been possible.

I think it’s noteworthy to mention that most art and cultural projects are run on the goodwill of a lot of talented individuals, who often only get paid for a margin of their time, if at all. In the Nordic region we pride ourselves on our creatives, but this does not reflect in the support these sectors are given. I do hope that forward-thinking politicians and private companies who support the arts and culture in the Nordic region, will come to acknowledge this substantial unpaid labour and create better infrastructures to accompany this fact.

A: The team behind the Pavilion Nordico is constituted by people from different Nordic countries, how did you meet?

Josefin: Well, Sara and I met through a project called Utopian Union. Emil and I run a graphic design studio called Kiosk Studio. Pavilion Nordico invited us to pitch a visual identity for the project. We put a lot of effort in our proposal because we really wanted to be part of this project — and were selected.

We wanted to create a visual identity that represented the project’s spirit of connecting people from different regions. So we used the concept of modern maps and locations systems as a reference.

Most residencies don’t put a lot of focus on their visual identities. The older institutions have a very sober, non-communicative way of presenting themselves. But graphic design is a very democratic way of opening up the project: good visuals are a great way of inviting communication. It’s not about making something cool, it’s about inviting people, and that’s what this project is all about.

S: Our team and collaborators are all from very different backgrounds. We have people in Iceland, Finland, Sweden, Denmark, Germany, and of course in Argentina. And the list is only expanding… even though we are working on a project together, everyone lives in different cities. Of course, we all spend time together when we can in Buenos Aires, Copenhagen or Berlin, but it’s definitely a very nomadic way of working. We rely on video calls, lots of mails and slack to make things happen.

Other than Kiosk Studio our partners in this first year included Icelandic Cycle Music Art & Festival, Berlin-based Gruppe Magazine and a big group of super skilled art and cultural professionals that really helped drive the project forward — such as Icelandic artist and curator Birta Guðjónsdóttir, Director of Cycle Music & Art Festival Guðny Guðmundsdóttir, German art historian and curator Niko Anklam and Danish political scientist Karl Granov. We are very lucky for having such a driven and inspired team!

A: Could you elaborate a little bit more the aim of Pavilion Nordico? How you are creating connections between the Nordic countries and other regions?

S: Existing residencies from Nordic countries outside of Europe, for example Swedish Iaspis or the Danish Cultural Institute, manage their own national residencies — but we wanted to push collaboration on a united Nordic level. We think it makes sense to represent the Nordic region as united when outside of Europe. Combining our different resources under our shared Nordic values will only result in stronger platforms for Nordic artists and creators.

On an international level, joint Nordic initiatives like Pavilion Nordico also foster strong new collaborations with creatives from other countries, which often continue in new projects and collaborations. This is already happening for us. One of our residents, designer Bettina Nelson, developed a chair in collaboration with local design studios and craftspeople. Now we have a new project, PN1, underway that specifically aims to bring together Nordic designers with Argentinian creatives. This is a good example of how we would like to work: it’s not about the Nordic culture being exported to Argentina; but more of a cooperative process from which both parties benefit.

A: You have hosted artists and designers in Pavilion Nordico, so it is a multidisciplinary residency, right?

S: Yeah, it’s indeed multidisciplinary, and it’s not just artists and designers, we are also open for applications from chefs, activists, scientists, writers, filmmakers and more. We are not interested in the usual criteria. Rather, we want to ensure there will be a strong collaborative element in the residencies and project ideas that connects the project to Argentina.

J: We are interested in creating a community, working as a community, and representing Nordic values such as equality, openness, and environmental protection.

S: Equality is a topic we got really involved in during this first year. The 8t​h​ of March, International Women’s Day, is a BIG day in Argentina. Pavilion Nordico dedicated parts of his program to the issues that where raised during the protests and festivities of that day. We joined the around 400.000 people marching the streets of Buenos Aires, and organised a dinner and informal talk after for female creatives to exchange their experiences. Iceland is number one in the world when it comes to equality; Argentina is unfortunately very behind — even though it is a modern and developed society. That’s why we really encourage applicants to propose projects that centre around the topic of equality.

A: How has it been the response of the local community to this new Nordic project in Buenos Aires?

J: Emil and I spent a month there, researching within and around the design scene. We felt really welcomed. People were eager to get in contact with us, and it was an awesome experience.

S: When we were there together in the first month we also had to fix a lot of things in the residency space, and everyone we encountered had a really positive attitude. You really get the feeling that things are going to turn out well.

We also felt really welcomed by the art world and the design world: curators, directors of the biggest museums in Buenos Aires, people from the galleries — everyone came to our opening!

A: Is the development of the program still in progress? You had a really long open call, right? How did you define the program?

S: This first edition was a sort of prototype, so we created the widest possible call for projects and residents. We just wanted to give people the chance to bring their ideas to the table. Since it was such a fresh project applicants could shape it a lot, and they can still shape it a lot.

We have just announced an Open Call for designers, and we are planning on testing a lot of other things as well. It’s much like a laboratory at the moment for us to find the perfect model for the coming years.

A: Can you compare the art scene in Buenos Aires with the one in Reykjavik?

S: That’s difficult because Reykjavik is so much smaller, and there is hardly an infrastructure for art. I feel like the art scene in Reykjavik is still in its infancy, and that’s not the case in Argentina, where you have a developed art scene with museums, galleries and international fairs. Argentina used to be among the richest countries in the world, and I think this is why they could put so much money in art and culture. In Iceland the art scene is quite fresh, so I think that in this sense, actually Argentina is way ahead. If you compare people’s energy however, you’ll find both Argentinians and Icelandic people have a really proactive way of working and doing things. 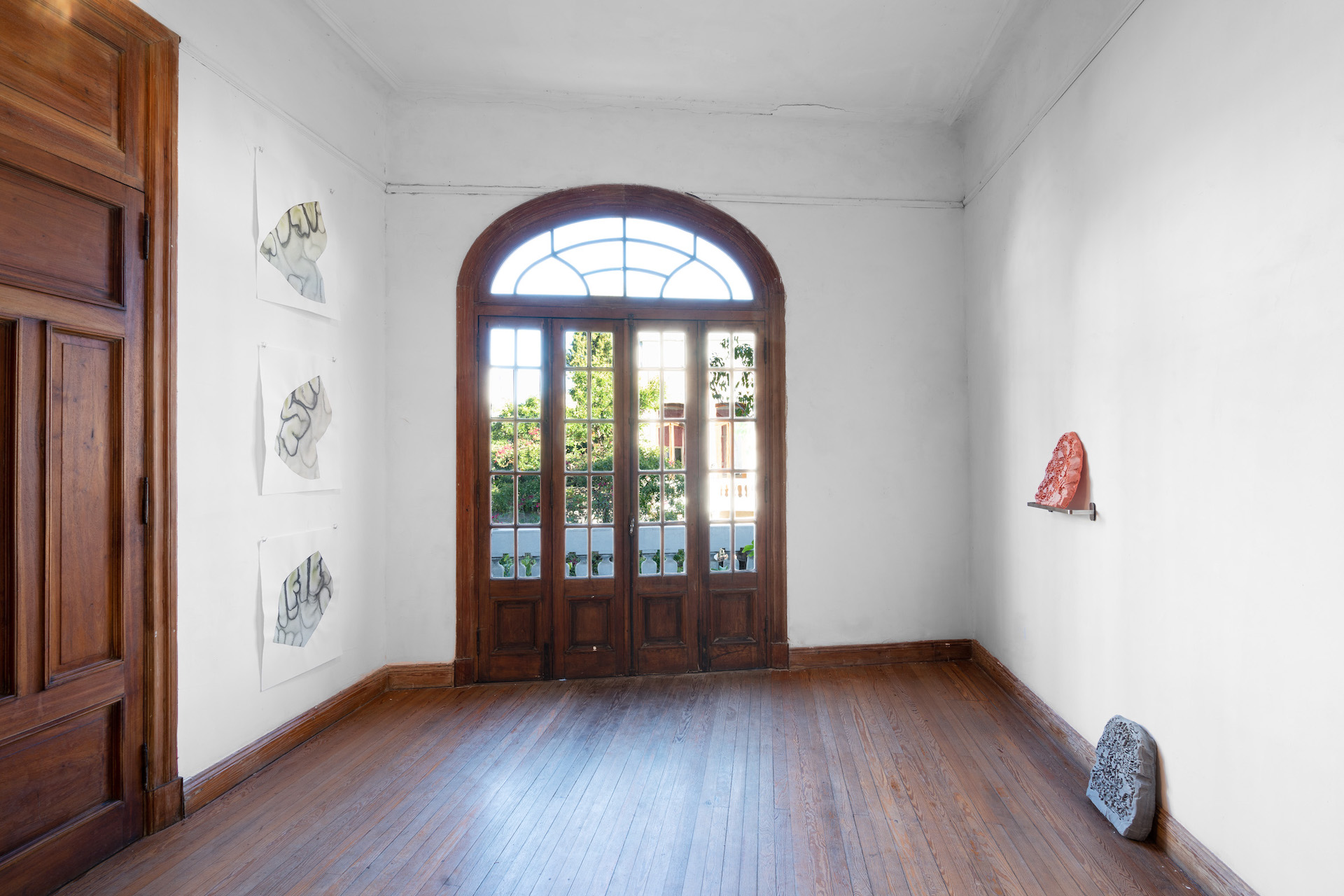 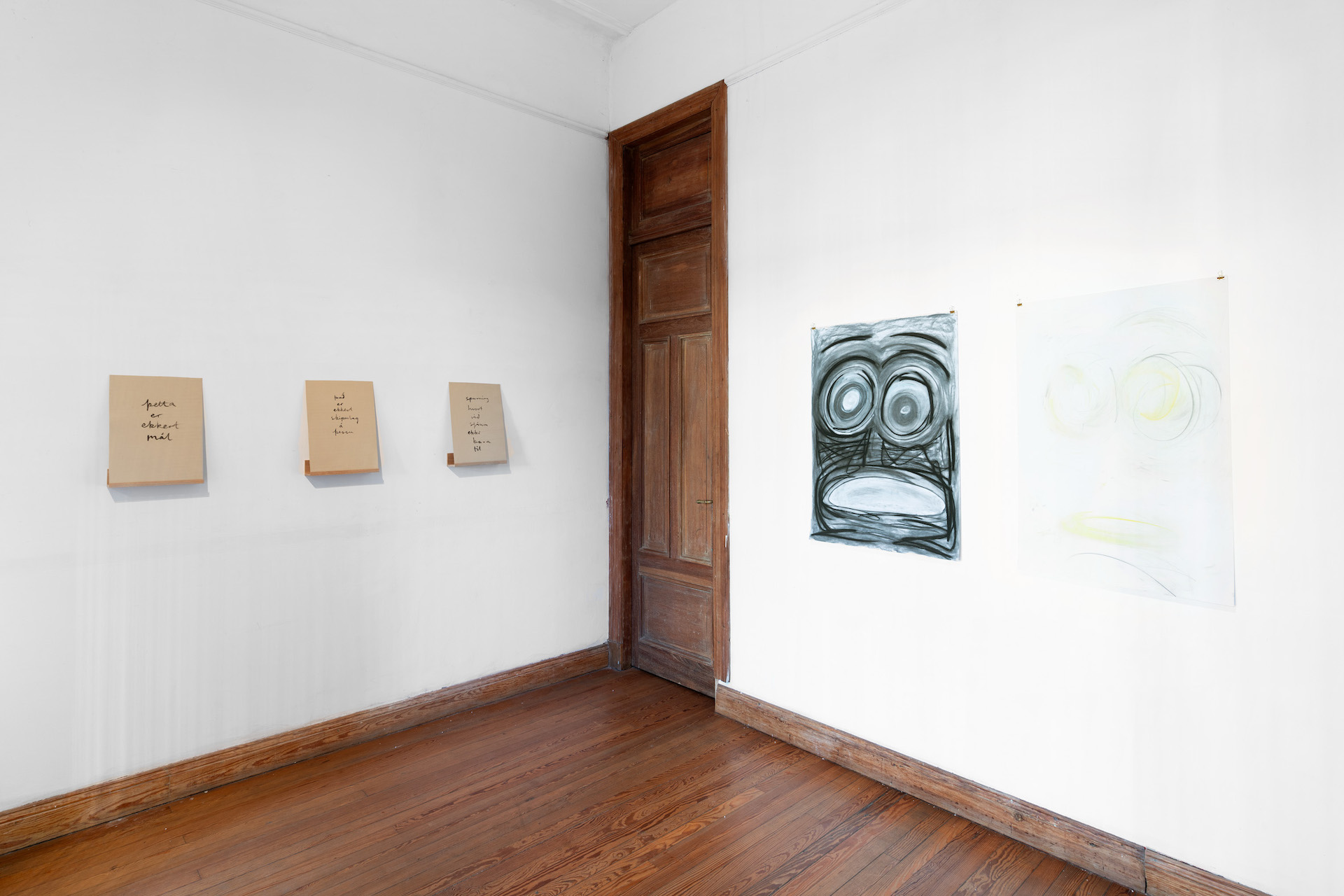 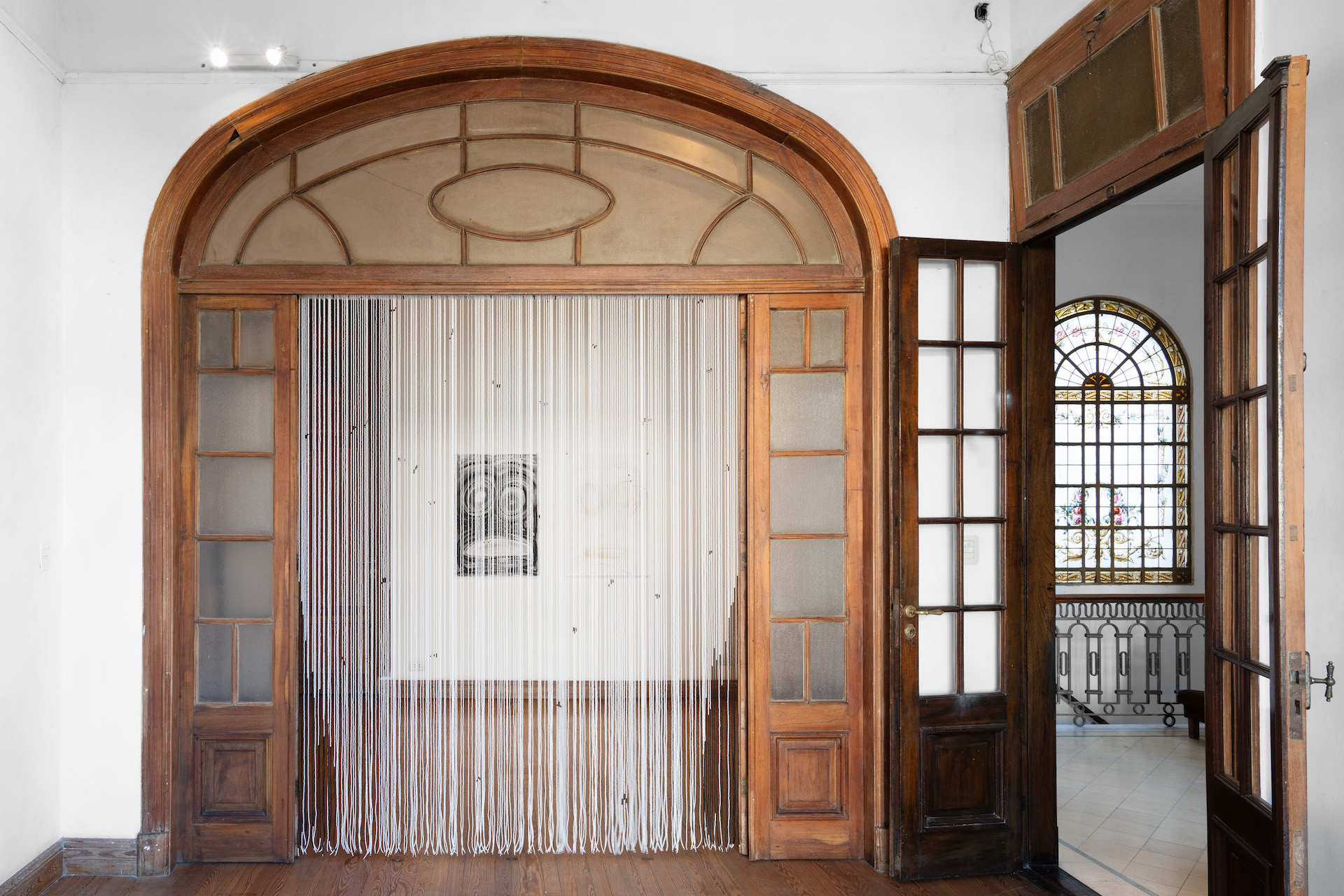 A: Both Iceland and Argentina are former colonies, do you think there is some kind of decolonizing process going on now in Argentina?

S: In April, during the Buenos Aires Art week, we had a show called Reaccion á Islandia​, named after a Borgers’ poem about Iceland. The exhibition was organized and curated by Cycle Music and Art Festival which has taken place in Gerðasafn since 2015 and has worked a great deal with postcolonialism in the Nordic Region. They brought this theme to Buenos Aires inviting artists from Greenland, Iceland and Norway. A lot of the guests who came to see the exhibition were surprised that there has been, and there still is, colonialism in the Nordic Region, and I think we ourselves are only beginning to reckon with things like the Danish treatment of Greenland.

I can’t speak on the efficiency of the decolonization process in Argentina, but it’s very clear that class structures are still quite pronounced. That’s why in future editions, we hope to work more closely not just with urban creatives, but also local, rural communities such as the craftspeople and traditional workshop that will be involved in the design project.

The reaction to the exhibition opened our eyes to the necessity of building bridges and creating a deeper understanding between two very far away places. The sympathy and understanding that the international language art and culture can create, new perspectives can unfold, and I think it’s good.

A: What’s the plan for the future of the project?

S: Over the next three years we want to develop PAVILION NORDICO further and see where that takes us. We are looking at the possibility of opening residencies in other countries as well, since the idea has always been a Nordic exchange with the whole world, not just one region. Our dream is to get the Nordic Council of Ministers involved as an official supporter. Let’s see!