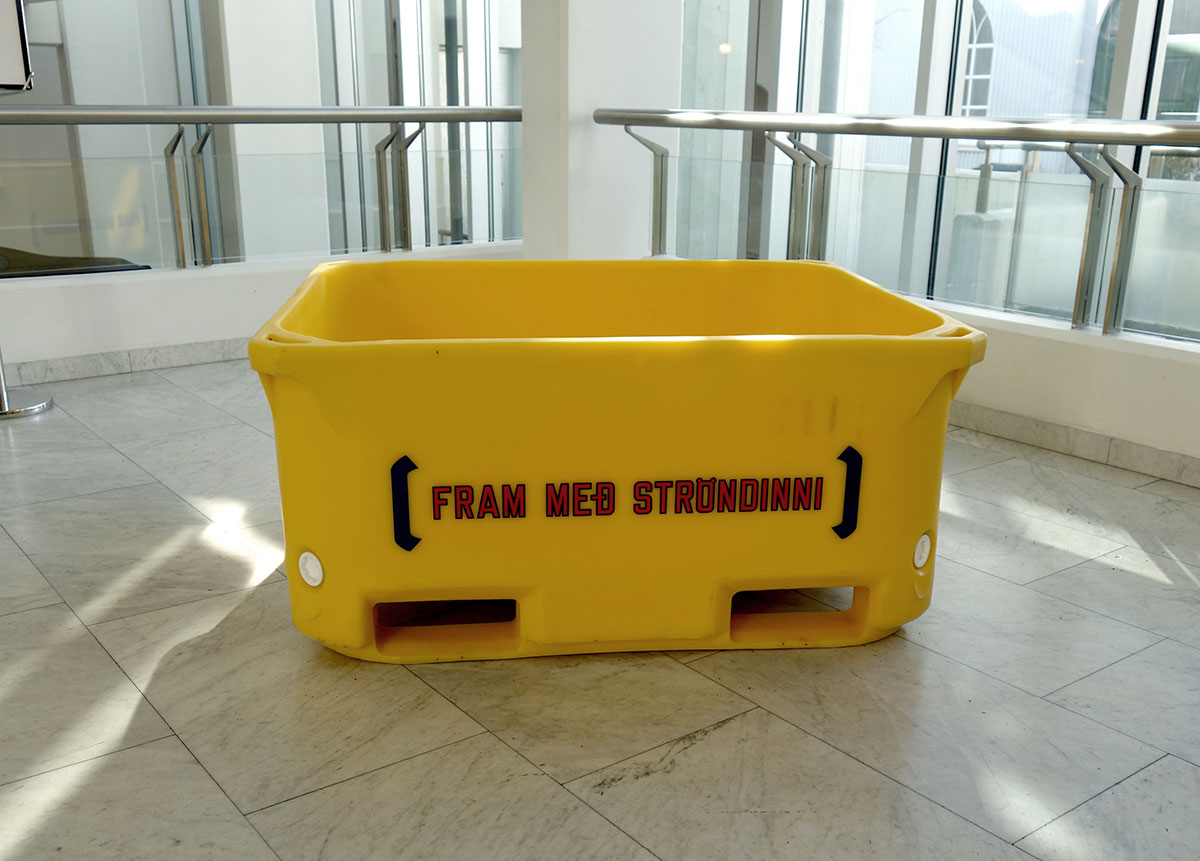 T E X T – Selected text-based works from the collection of Pétur Arason and Ragna Róbertsdóttir opened September 15th and will be on display at Listasafn Íslands until May 14th, 2017. The exhibition is the third in a trilogy curated by Birta Guðjónsdóttir each focusing on a specific medium in Pétur and Ragna’s collection. In 2010, Alternative Eye at Kjarvalstaðir presented photographic works from their collection. The chosen works dealt with concerns surrounding how photographs are being considered in contemporary art and what possible approaches will be pushed in the future. In 2011, DRAWING–Faster and Slower Lines at Listasafn Reykjavíkur borrowed its name from a work by Kristján Guðmundsson from 1976. This exhibition showcased the use of drawing in both two and three-dimensional works, expanding the definition of the term to include the material identity of a drawing and its role in connecting the body and architecture.

The collection of Pétur and Ragna has been growing for decades. The core of their private collection was accumulated when they invited artists to exhibit in their home gallery on Laugavegur in exchange for artwork between 1992 and 1997. The collection, in turn, played a huge role in connecting Icelandic artists with a broader art world and shaping the direction of contemporary art in Iceland. The exhibition text introduces the visitor to the overlapping realms at hand: “We are accustomed to seeing text and image as opposites, a dichotomy which has been transcended largely in contemporary art.“ The collected works have the effect of elevating notions of text beyond everyday usage. Text is shown as more than a conceptual tool, but a symbolist reality. Questions are brought up such as ‘how far can text be extended into other mediums such as sculpture and painting?’

Take the works of Bjarni Þorarinsson (1947) whose mandala-like drawings Visirósir / Visío-Rose, (Wise Roses) 1990-2014 are based on a system of sounds in Icelandic and German. Each sound and its possible rhyme are part of a key to unlocking some truth in the language, a symbolism pointing to a beyond. Pronunciation is power and rhyme is the lifeline. 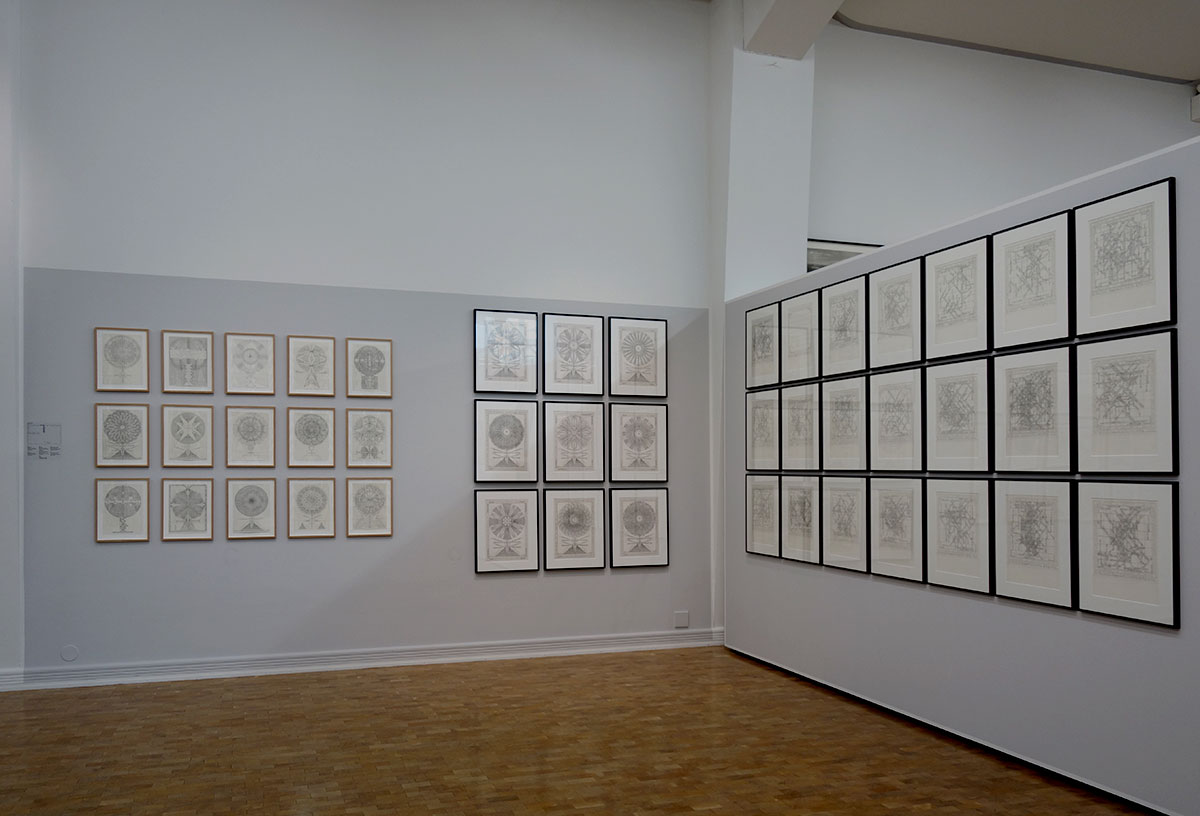 Bjarni Þorarinsson’s Bobby Fischer and Boris Spassky: The World Chess Championship Match, Reykjavík Iceland, July-August 1972, presents a map of the game laid out in a mechanical array of time; narrative is condensed into A to B. Bjarni’s works are based on the idea of a key that all other symbolizations are based on: the key to language. The language is a code in itself, which infuses both imagination and the structure of an entire worldview comprised of his symbolism made of words and drawings.

Lawrence Weiner (1942) creates his conversations with the interior architecture of the exhibition place in his mother-tongue (English) and in the native language of the place where he is exhibiting. Wiener’s work expands the definition of text to reflect its core identities and the way it is always connected to its source material be it graphite or plastic, but also to a pure conceptualism. In The Light of Day, 1998, Weiner lets the natural process taking place with earth materials unfold in the viewer’s imagination. 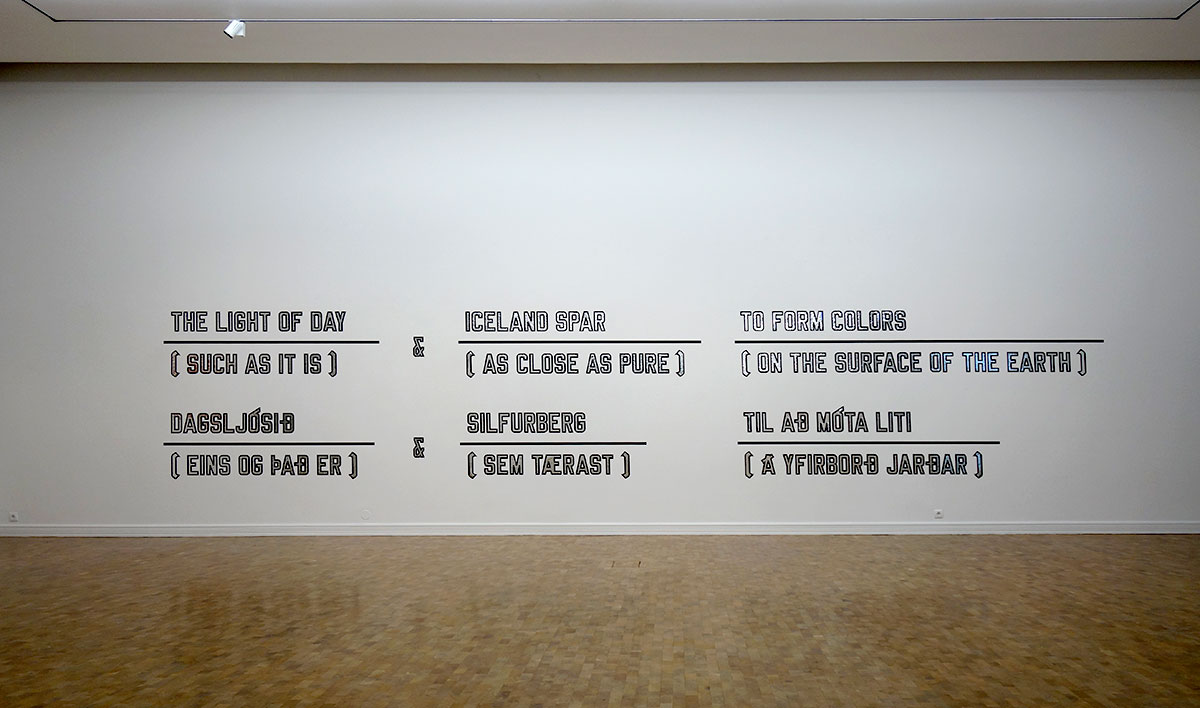 A collection of postcards and telegrams from the artists to Peter and Ragna features a series from the notably reclusive, On Kawara (1933-2014). Telegrams sent to Pétur throughout 1996 carry the sole message:

I AM STILL ALIVE

This series actually began in 1969. The artist sent the same message to hundreds of friends and acquaintances in the art world. The telegram format is notably hands-off, as the artist has no control over the eventual aesthetic product, representing a certain attitude towards language and its uses.

Hanne Darboven’s (1941-2009) Welttheater ´79 covers the largest section of the exhibition with 366 framed images of theater scenes of her own design. Instead of using text, Darboven creates complex, hand-written number systems to represent the passing of time. This documentary language is like a mathematical equation, mapping huge swaths of history into a comprehensive visual form. She is known for her massive installations, and Welttheater ´79 is no exception. Darboven’s language, lacking a text per say, points towards the interrelationship between text and numbers instead.

Roni Horn (1955) presents From Still Water (The River Thames For Example), 1996-2000. Her still photography from a larger series on the Thames, looks at how the river factors into the history and imagination of the world. She reads the river, as one who is navigating the currents would, and offers her findings as text to accompany the photograph of the river. For example: 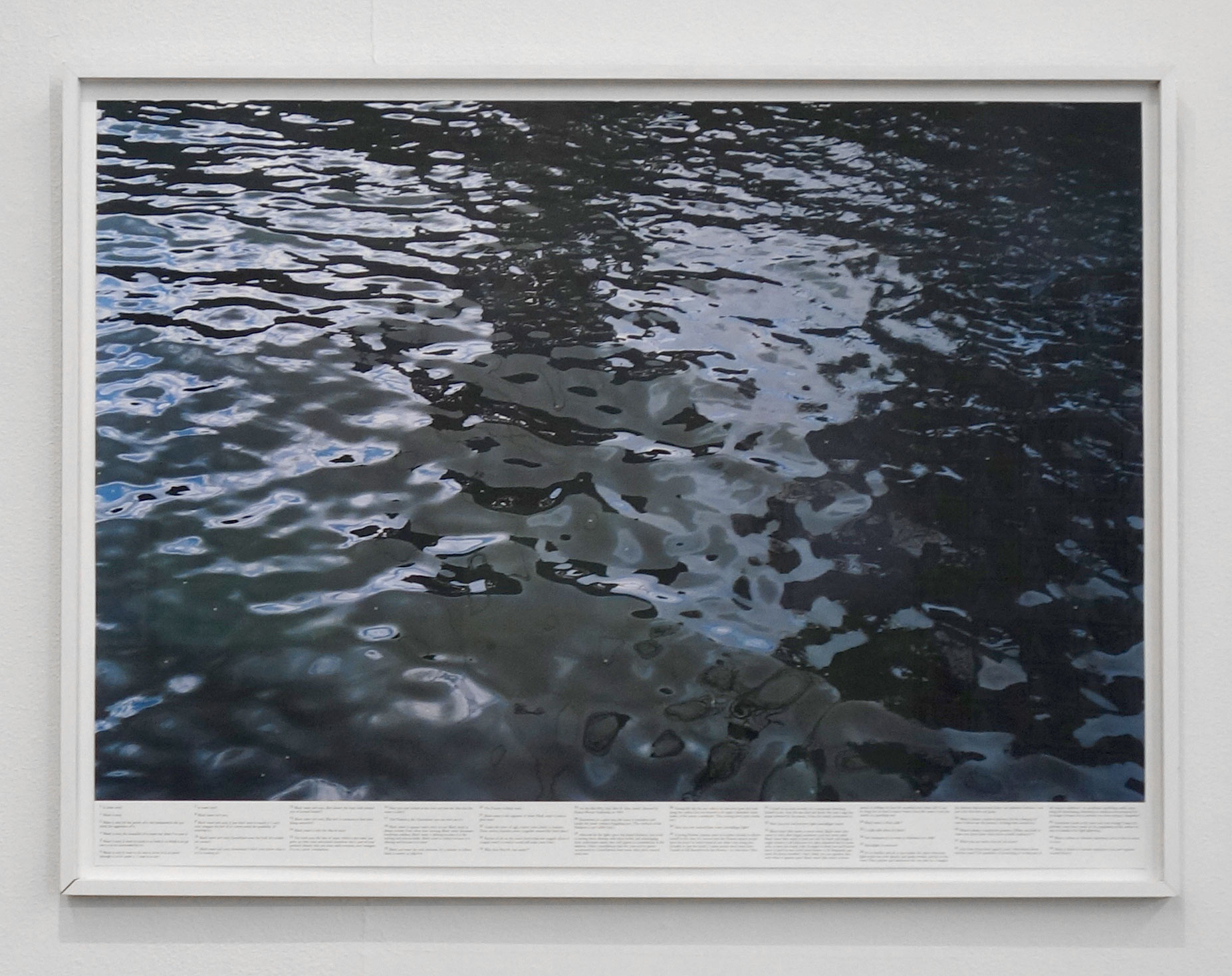 Maps, codes, structures: language is as much about science as poetry, and perhaps it is what erupts from the overlay of text as visual concept that informs us about the abilities of text and text-based forms. Many of the artists who were involved in the advent of text-based works appearing in the visual arts in the 1960s have artwork in the exhibition including Joseph Kosuth, Yoko Ono, and On Kawara. One can see, and read, the way in which the decades following saw artists further expand the use of text-based art forms, in both very scientific and poetic statements. Although perhaps first intended, as with most new art forms, to either build-up or break-down current tendencies, the advent of text-based works served to free visual representation in the imagination of the viewer. An unlimited way forward with language was created- and the direction was towards conceptualism.