The Alchemy of Color- Jeanine Cohen at Hverfisgallerí 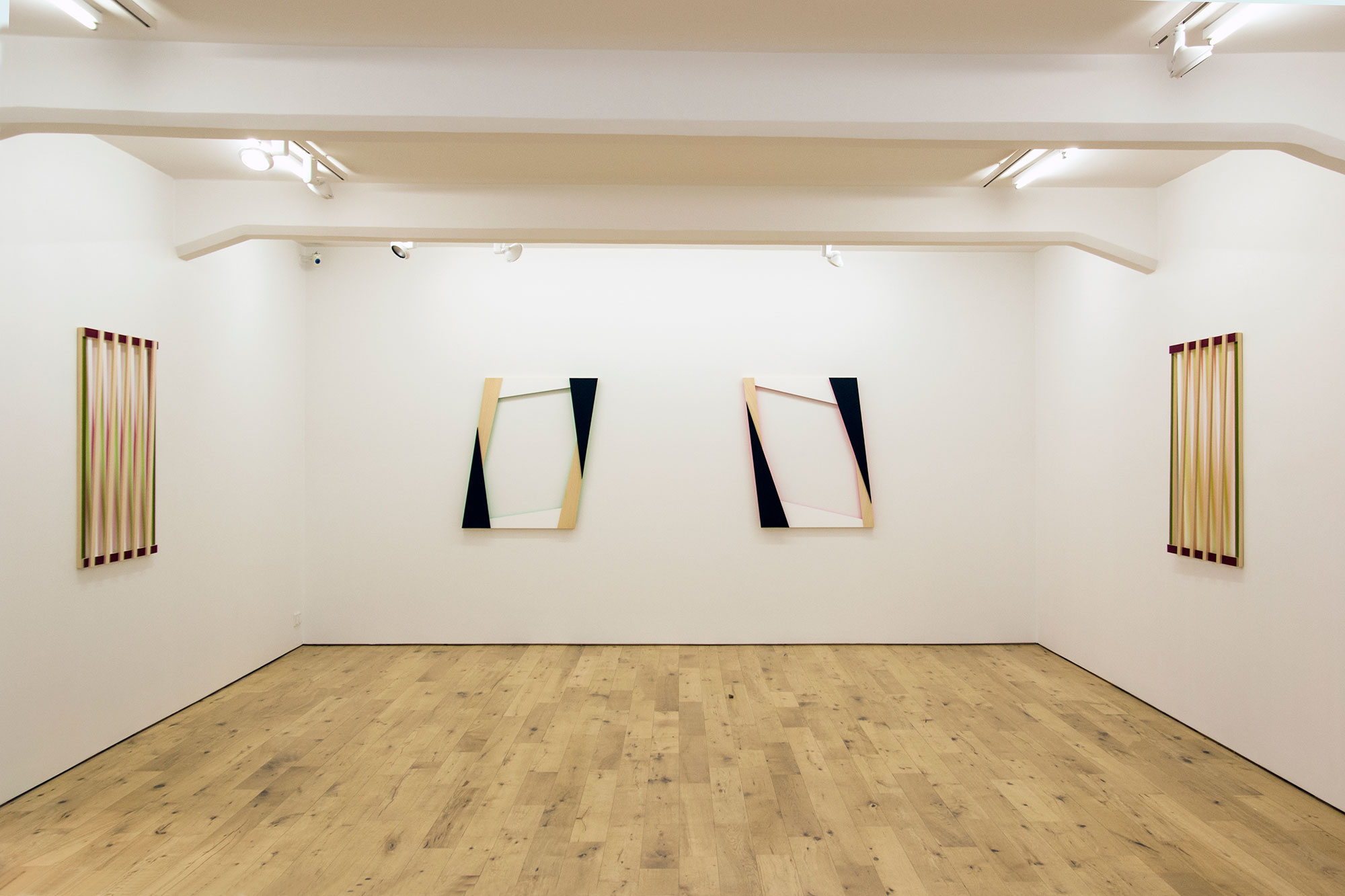 The Alchemy of Color- Jeanine Cohen at Hverfisgallerí

The Space Between by the Belgian artist Jeanine Cohen is now on view at Hverfisgallerí from March 17th to April 29th.

Jeanine Cohen (1951- ) is foremost a painter. In her work, she carries the painting tradition into an architectural frontier in which the exhibition space takes part in the referencing of a frame. At Hverfisgallerí, Cohen presents two new series, Diagonal and Angles, in which she continues exploring the ways in which a frame can be referenced without a canvas, revolving around the parameters of paint application, color and light interaction, and the expansion of the pictorial surface. Like miniature architectural models, the works contain a world of atmospheric possibilities in themselves. Cohen has found a way to animate these worlds using the movement of the viewer to bring about a shifting of interplays between light and color within the space.

Diagonal and Angles speaks of accounts of subjectivity in architecture that tell the simple story about interiors and exteriors. In the form of a painting, the folded multidimensional framework tells us that what is interior is nothing more than a fold of the exterior. As in Deleuze’s ‘fold’ which he uses to expound on his concepts of the possibilities of producing subjectivity, the interplay of light and color guided by the referential frame can be seen as a topology of these meeting places called ‘folds.’ 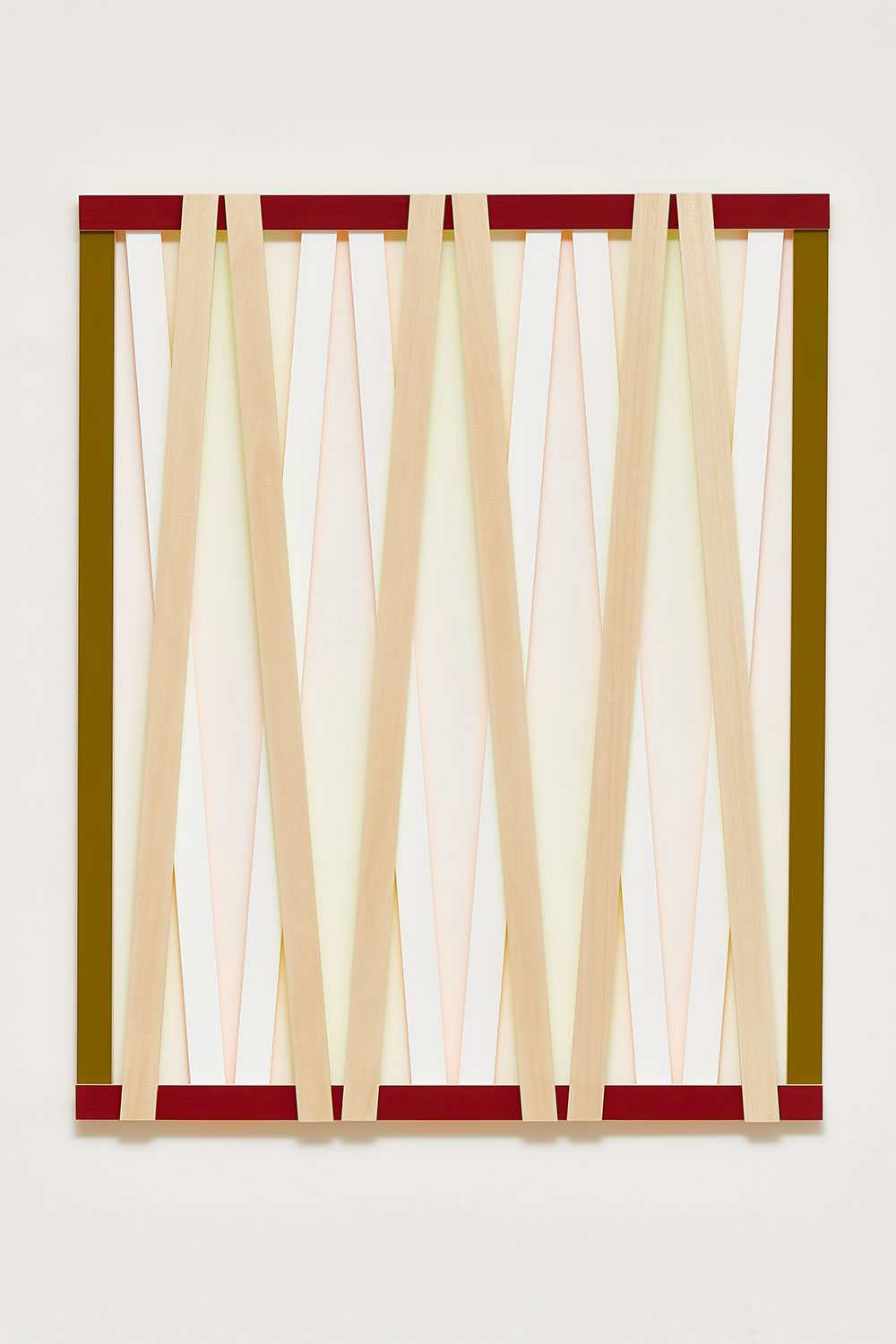 In the Diagonal series, Cohen pairs the dense colors of the outer edges, an olive green and a wine red, with fluorescent hues of the same tones, which are painted on the underside of wooden panels. These fluorescent hues reflect on another layer of white panels as well as on the gallery wall. A shadow play emerges, although the shadow is made of light.

There is a prescience to the electronic image in the works, related in the alchemy of colors that hang in a balance of appearing and disappearing, in the red and green hues that were also the two-color system used in early Technicolor processes, and in the way the panels criss-cross as in the intersecting lines which make up an electronic image plane. The hues reverberate from the frame, making the image expand and contract. In the Angles series, the fluorescence shifts against the vacuum created by the black and white. 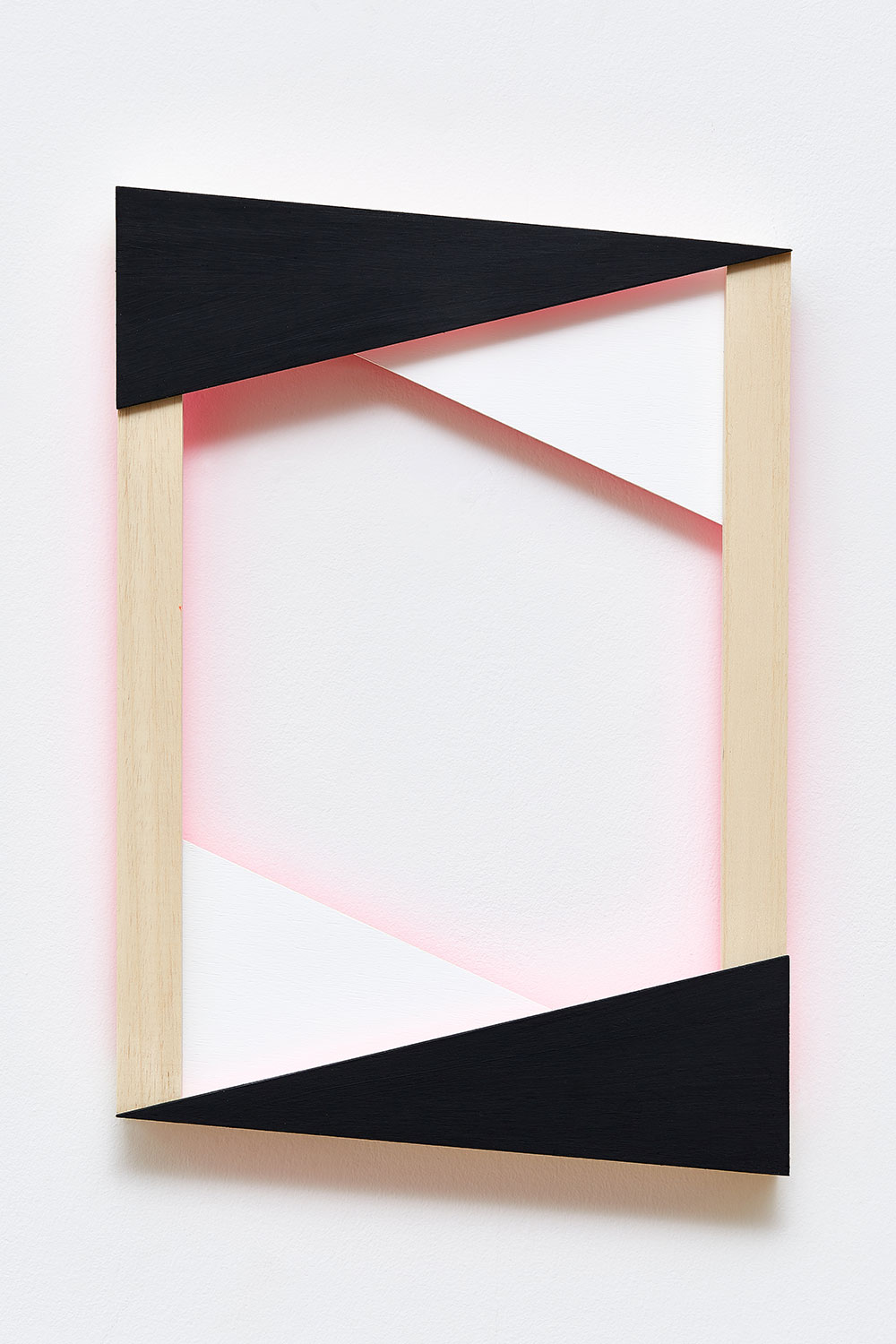 If perspective is the guiding force of painting, then the narrative focus provided by perspective can be seen in Cohen’s work to be telling a story about the history of the pictorial surface of the painting and where it collides with architecture. The story seems to tell us that we are now beyond the vanishing point; it sits somewhere behind us as we experience the shadow of fluorescent light on a canvas that doesn’t exist. Cohen collapses the narrative of perspective while giving the works their own glow from within, similar to the confrontation between temporal and spiritual authority in a Renaissance painting. 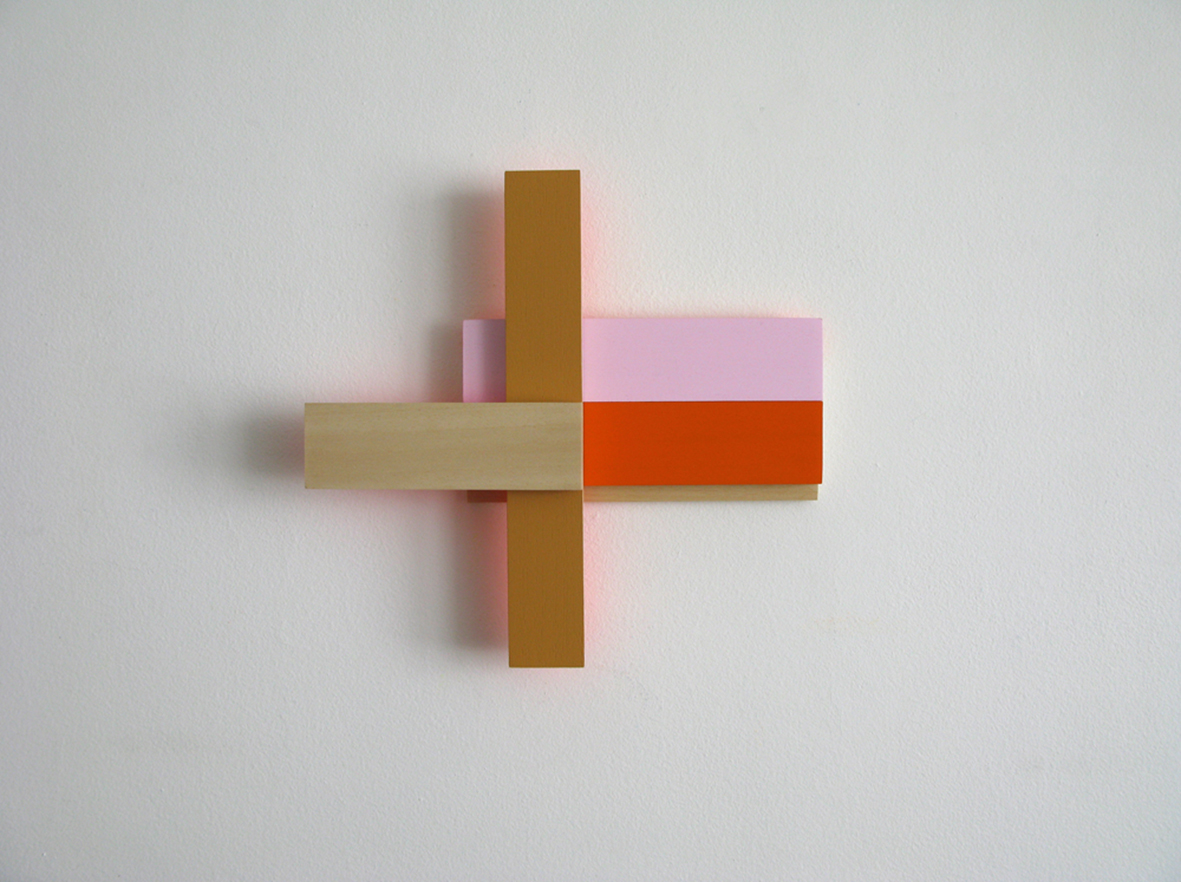 A previous piece from 2013 also exhibited at Hverfisgallerí shows another organization of structural planes in which to consider the frame. In Winter Series No. 1, a cross-shaped structure emanates a backlit glow of pink neon amongst a further interplay of shadow and angle and denser color hues. 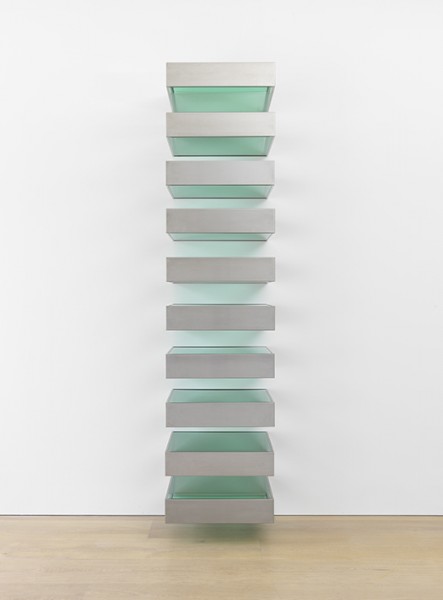 Dan Flavin (1933-1996), the American minimalist sculptor and installation artist used industrial neon lighting tubes to bring together color and light, while Cohen organically goes about electrifying her work. Using neon light tubes and metal fixtures, Flavin brings an extra dimension to the conversation between light and color in the exhibition space. His neon installations initiated focus on the orientation of the viewer’s experience of the work.

Cohen’s elucidation on the conversational nature of color brings to mind other artists whose work with color and light take part in a similar discussion. Donald Judd (1928-1994) American sculptor also worked towards an absolving of interactions between space, light and color. In his wall stacks using colored Plexiglas and steel from the late 1980s, light is filtered in an alteration of presentations as the viewer interacts with the exhibition. The simple relation of objects reminds the viewer of the natural properties of light and color. 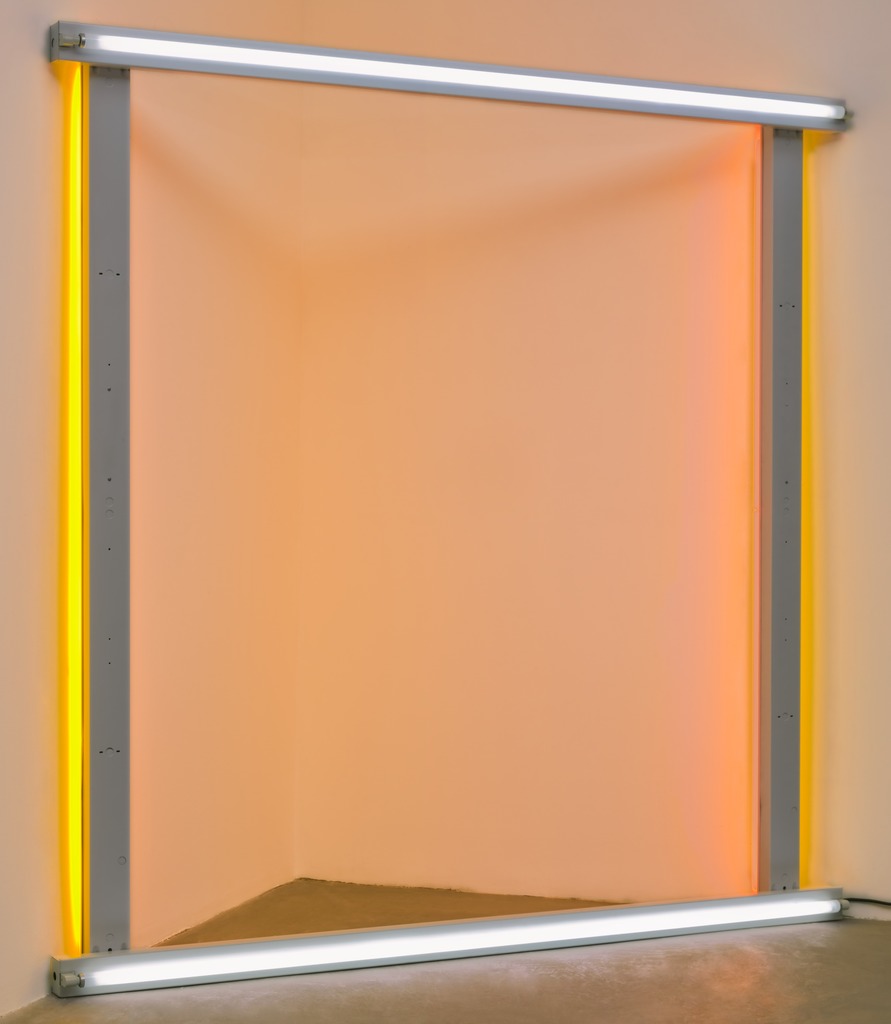 These earlier contemporaries of Cohen’s explored the parameters of their shared artistic elements in innovative ways which are relevant here only to highlight the contribution Cohen has made to existing fields. The structures holding these works look like canvas stretchers without canvas, or architectural drawing boards, but not a work pictorially displayed in any traditional sense. Cohen bridges the gap between painting and architecture, creating a fluid vanishing point where light and color are hung impossibly on shadow and form. Like a prescience to time-based arts, the works’ infrastructure moves between an image of construction and destruction, in a disappearing act with the wall, the atmospheric colors hyperreal in the way that they are already closer to a memory.

Deleuze, Gilles. The Fold: Leibniz and the Baroque. Translated by Tom Conley, The Athlone Press, 1993.