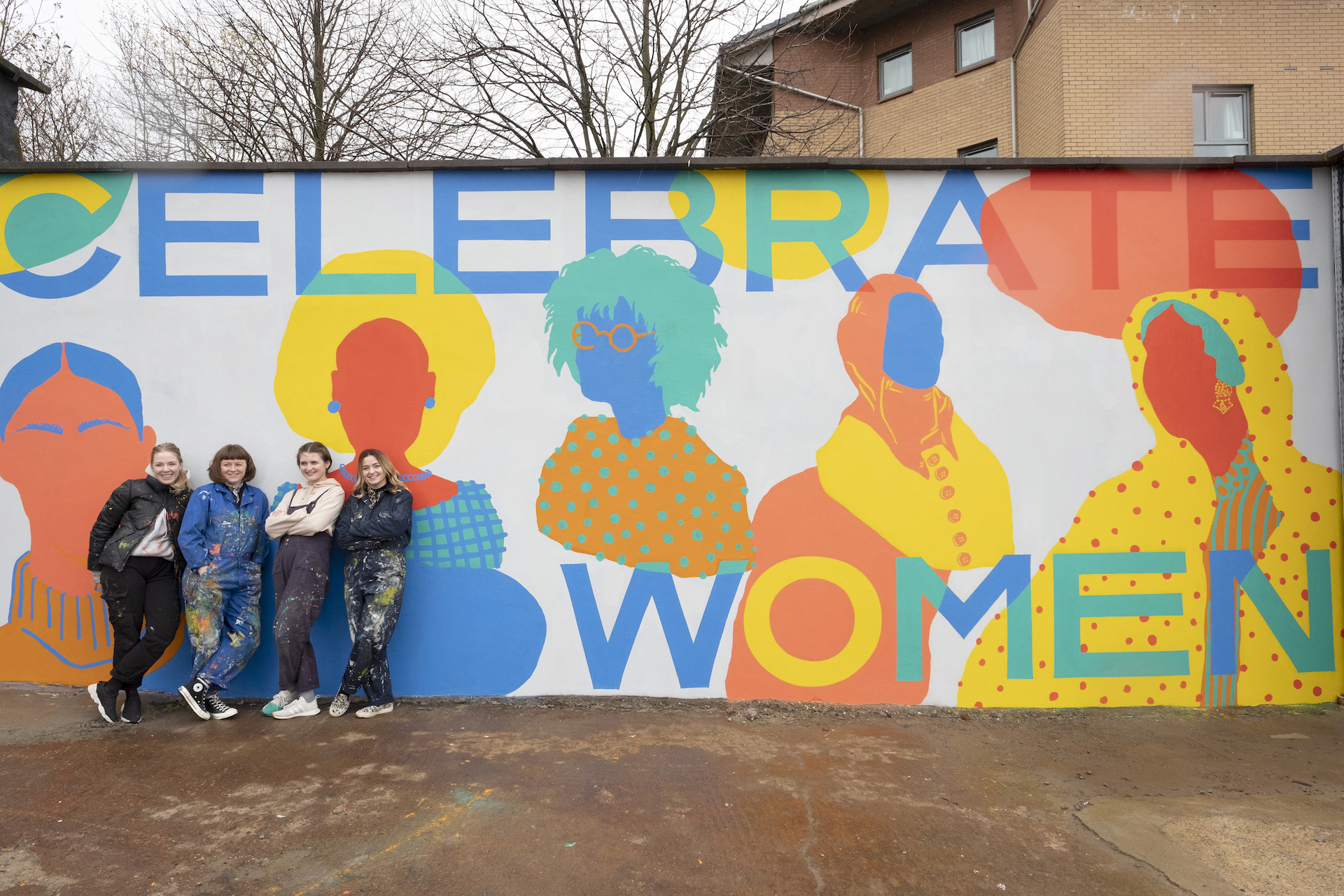 I look up at the same sky as everyone else.

These words were so thoughtfully strung along Cobolt Collective’s most recent mural which immediately caught my eye. Bright pops of coral, ultramarine, scarlet and teal stretched throughout a collage of illustrations that took me right back to my childhood summers at the Jersey Shore. The vibrant palette eventually managed to fall secondary to this phrase, and I was taken aback by how it resonated much stronger with me than my immediate feelings of nostalgia for the sun-bleached east coast that inspired this particular project. 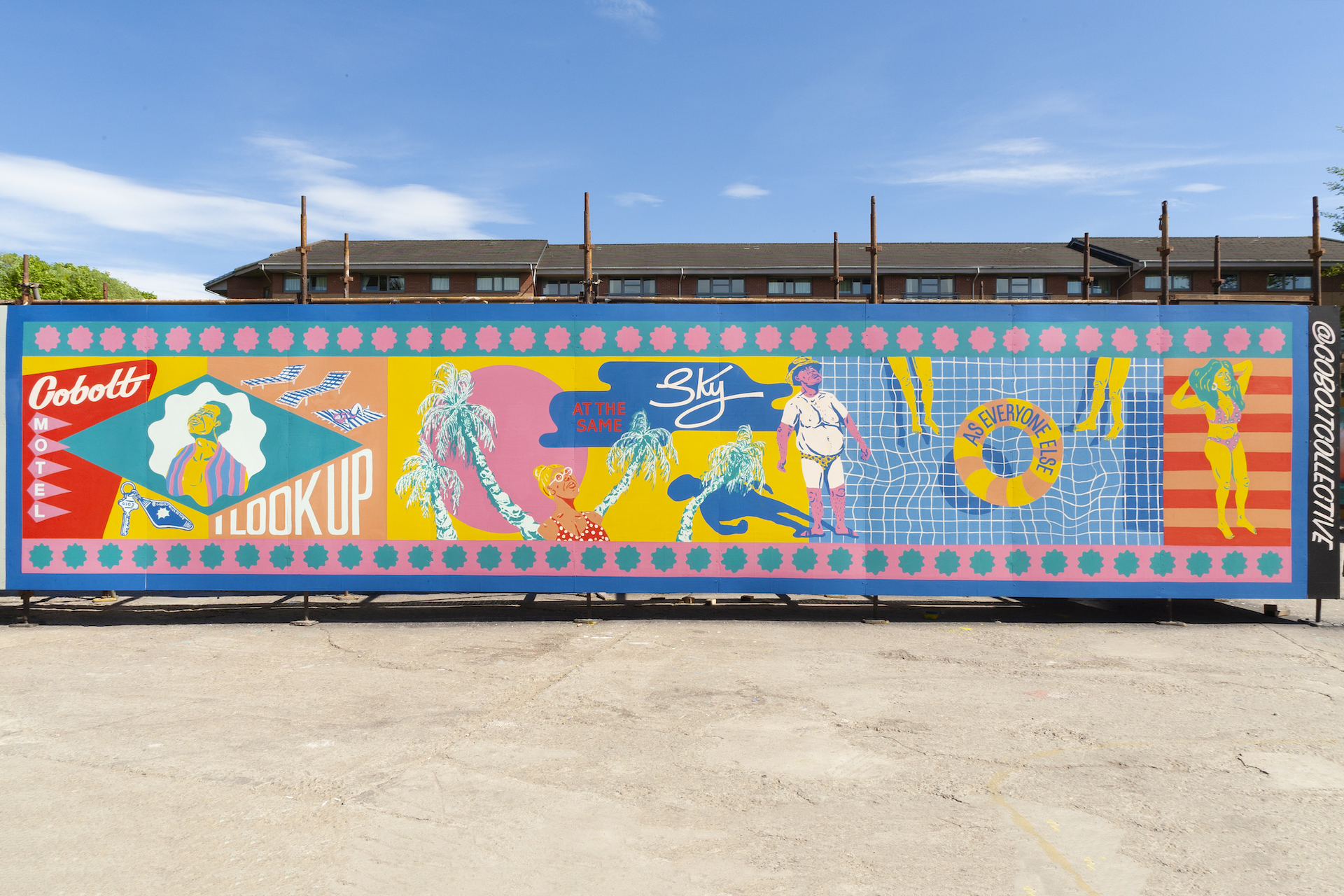 In many ways this mural sums up what I understand Glasgow’s newest (and only) all-woman street art collective to be – vibrant, layered, bold, precise, thoughtful, yet also warm and carefree. Comprised of Chelsea Frew, Edda Karólína Ævarsdóttir, Erin Bradley-Scott, and Kat Loudon, Cobolt Collective was conceived in 2018 through their desire for more inclusivity and gender balance within the street art community. These four women epitomise collectivity at its core. As graphic designers, sign painters, illustrators, freelancers and business owners, they themselves bring a fusion of skills, interests and backgrounds to this sisterhood. Their collective practice differs from the mainstream street art scene as they root themselves in research. They take their time, building up layers of ideas, concepts and colour, to produce intricate levels of meaning in a single mural. Running various public workshops alongside to their street art practice, their aim is to educate and empower other women to take up space. In many ways, their processes echo their message – complexities that need attention and time to evolve and unravel. With their colour palette acting as sensory triggers, along with the merging of four complimentary yet distinct visual styles, and a seemingly effortless collective confidence, they ultimately encompass the force that is Cobolt Collective.

The immediate associations with their murals, for me, were obvious – the iconic heroines from the 1970’s feminist art movement such as Barbara Kruger, Jenny Holzer and the Guerilla Girls who challenged systematic barriers in bold, inspired and public ways. Their (often) text-based, public and powerful works paved the way for women today to have a voice. It’s important to acknowledge the labour of all of those who so boldly stood up for women’s rights, and I find it imperative for feminists today to continue to actively make space when there seems to be none. Cobolt Collective is carrying on the tradition of strong women making strong work, but I find their softer energy and approach of making so refreshing. It’s important to be reminded of the strength it takes to remain soft and positive in a world where there’s an abundance of (sometimes unnecessary) force where one can often be left feeling like only the loudest voices are heard. 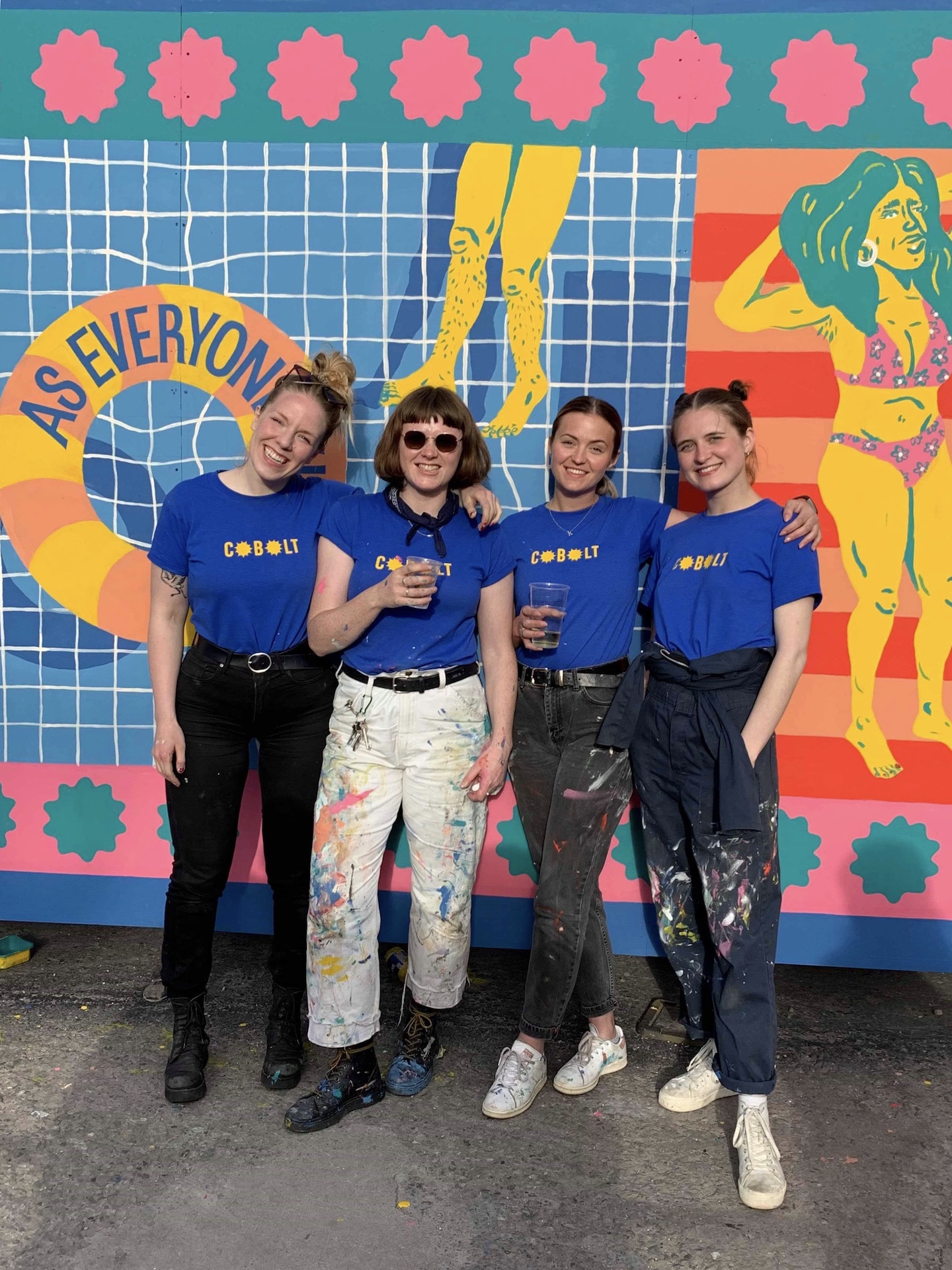 Roxane Gay (re)defines feminism so brazenly, and in a way that I have often felt but have never been able to articulate as eloquently within the pages of Bad Feminist. She states that feminism is complex and evolving and flawed, and that it often seems to be held at an impossible standard, as we sometimes forget that this movement is run by humans who are themselves inherently flawed. Gay carries on and says that because feminism is about choice, then as a feminist, it is her responsibility to fight for the rights and decisions of all women even if their choices are not the ones that she would make herself, and even if those women choose to not be feminists.[i] Change does not happen instantly – it’s complicated, constant, strenuous and often leaves us feeling raw. Feminism should never stray too far from humanity, and I hope that there’s space for us as a society to redefine the conventional notion of strength, and to practice love as an action.

Highly celebrated women such as Tracey Emin, Malala Yousafzai, Greta Gaard, and Margaret Atwood, to name a few, continuously employ language – carefully chosen (s)words that permeate us and help shed light on the realities of women within the current cultural climate. Feminism is not a single voice, but many voices, and it’s important to not lose sight of the urgency to support and celebrate the women in our personal lives – the “everyday women” – our mothers and mother figures, partners, wives, sisters, teachers and friends – whose platform may not be as public, but who deserve just as much of our time and space. I’d like to think that Cobolt Collective’s work contributes to this ongoing sisterhood of everyday thinkers, makers and doers who are occupying public space and are asking not just for change, but systematic change. Feminism has only gotten more complicated over the years, but occupying public space in any capacity proves time and time again to have merit and purpose. Art in public spaces can often build an intimate relationship with its viewers. It integrates more seamlessly into our daily lives and allows for more time for reflection and resonance. I could imagine countless lines from my conversation with these four women plastered in a Guerilla Girls pamphlet, on a Jenny Holzer condom wrapper or stamp, or as one of Tracey Emin’s neon signs.

As we sipped on our coffees, they began to unpack the local lineage of strong feminist activism that exists in Glasgow. Mary Barbour, for example led 20,000 women through the Glasgow Rent Strikes to protest against the irrational rent increase in Govan in 1915. Her tenacity protected thousands of tenants from being displaced from their homes. Barbour later went on to be Govan’s first woman councilor.[ii] They also told me about the Glasgow Girls – a group of young women from Drumchappel High School who fought against the Immigration Service raids that had detained their Belarusian classmate and her family, who were seeking asylum in the UK. Cobolt continued to lay out countless social justice issues that impacted the lives of the locals, but that were tackled with such force and integrity. They made it sound so simple, even though I could feel the energy and emotion in their voices as we continued on. This strength spans decades and finds itself manifesting in various iterations due to the seeming inherent mindset for Glaswegians to simply, as Erin said, “not put up with shit that isn’t fair”. Glasgow is a city that epitomizes what it means to be a part of a community and is made up of people who choose to make their neighbours’ problems their responsibility. 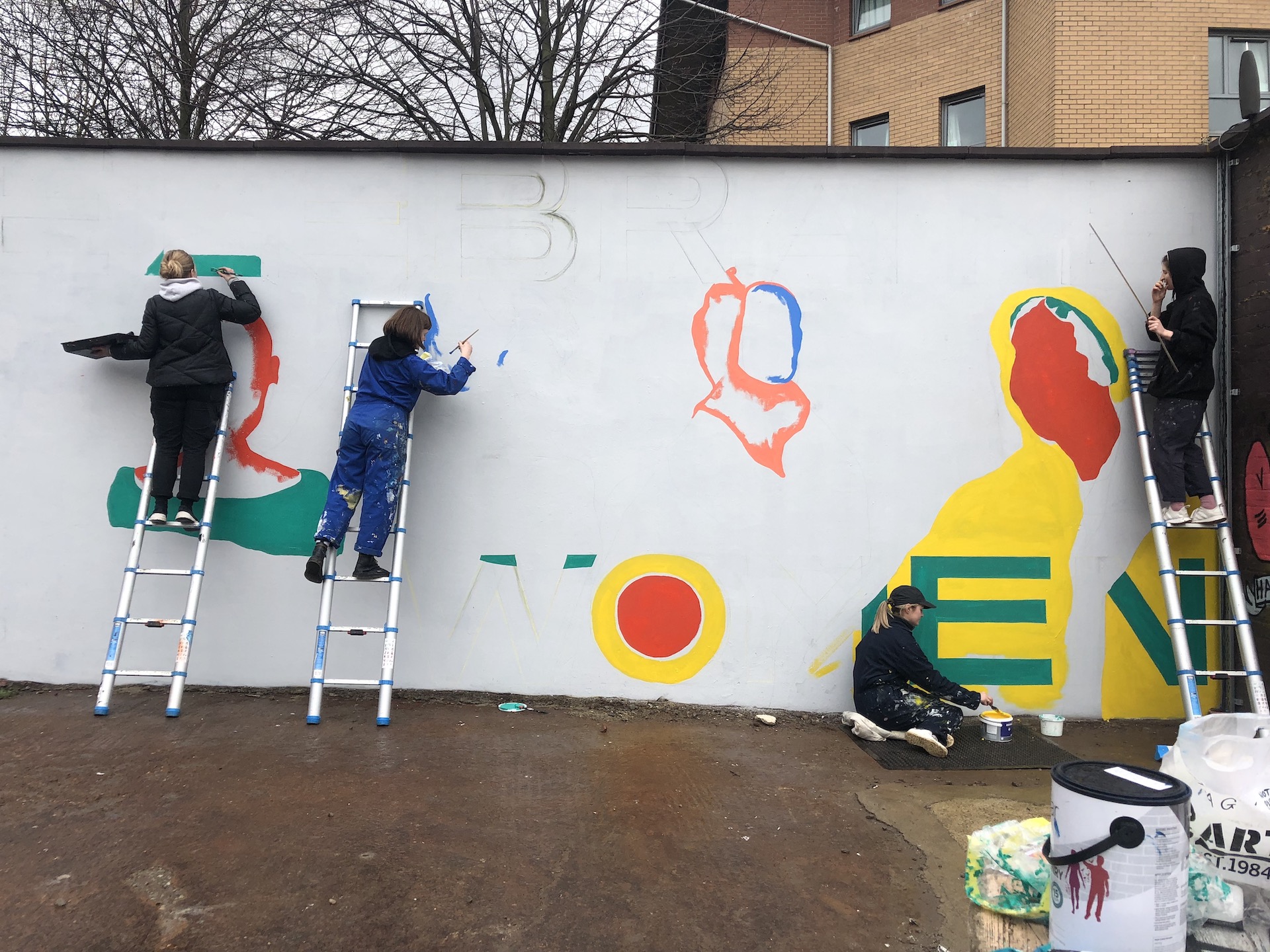 The collective, like their mural’s phrase, tries to keep it simple though they are far from simple-minded. Cobolt chooses to take a positive approach when challenging complex socio-political concerns, teaching by example in order to inspire positive change. Someone will always have an opinion, as they so acutely pointed out, and though systematic barriers like sexism and mansplaining are still issues they face as minorities in their field, their positive approach has garnered highly positive feedback both from within and beyond their communities. Now being more in the public eye, they’re aware of their response-ability with this platform and it seems to only push these women to band together and be more ambitious, crediting their force and confidence to each other – which to me, encapsulates sisterhood in its entirety. It’s an honour to be able to witness Cobolt slowly unravel into their own. As their mural’s phrase sinks into my mind a bit deeper, I’m reminded of Yoko Ono’s infamous words about how the sky is always there for her, and that when she looks up at the sky it’s like she’s looking at an old friend.[iii] That familiarity. I begin to extend my thoughts onto the importance of community, the feeling of inclusion, and our need for connection in both intimate and public ways. I revisited these feelings through this mural the same way as when I’ve allowed my eyes to rest by watching the clouds passing or the stars shining – linking the scale of the mural and the scale of our sky; the feeling of being so big (empowered) yet so small (belonging). Simultaneously. Perhaps as much as we’re constantly (re)learning about the problems and possibilities of our surroundings, the necessity for introspection and to simply look up is just as important.

[iii] This Yoko Ono quote that I’m referring to reads: “The sky is always there for me, while my life has been going through many, many changes. When I look up the sky, it gives me a nice feeling, like looking at an old friend.” The date and origin of this exact quote is unknown, but a similar one exists in her Sky Piece I in Acorn.

Writer’s note: I would like to acknowledge that the limitations of language can often effect the ability to describe the full spectrum of gender identities and specificities (especially in texts like these), but I’d like to clarify that when I refer to “woman/women”, that I am inclusive of any person who identifies with this gender on the scale, including but not limited to trans and intersex women, non-binary, and gender fluid individuals.

Cobolt is a mural collective of four designers – Erin Bradley-Scott, Chelsea Frew, Kat Loudon and Edda Karólína. Aware of the unequal balance of male to female mural artists in Glasgow and across the UK, they decided to start their own collective in the hopes of influencing more women to get involved in large scale mural projects. Despite the fact that women take up 50% of the population and 70% – 80% of art students are female, almost all of the large scale murals in Glasgow are done by a small group of male artists. They decided to form this collective to offer an alternative to the gender imbalance within Glasgow’s mural scene. Cobolt is currently working on numerous murals in collaboration with local and national organizations such as Urban Roots, Barclays Bank, and the University of Glasgow.