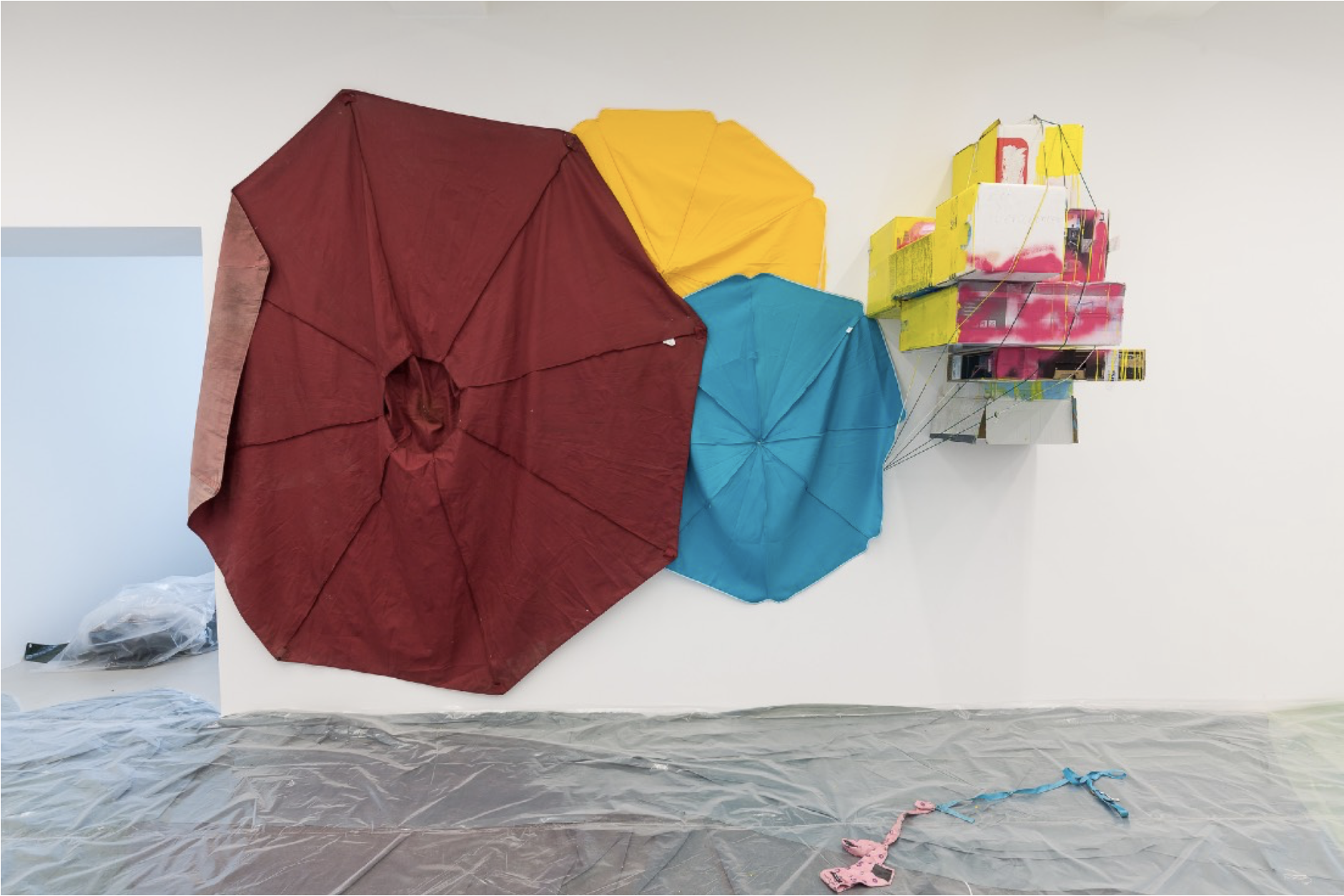 “Tread lightly,” the woman beside me warns, “there are things on the floor.” Standing at the threshold of Gallery 02, Eckstein’s arena within the Akureyri Art Museum, I watch the cadence of the visitors shift from stride to tread. Uncertainty is etched on faces. One throws the question to a nearby group,“are we allowed inside?”

At first glance, the exhibition space resembles an adorned construction site. Sheets of dark green plastic engulf the floor, submerged and ship-wrecked objects appear to float within these layers; both hidden and accentuated by the shards of film that blanket them. Nonsensical items are strewn underfoot; palm-leaves, dehydrated water-bottles, a wigged human mask left compressed, as if petrified under ice. The sparse assemblage, to say the least, is one of eclectic intrigue. 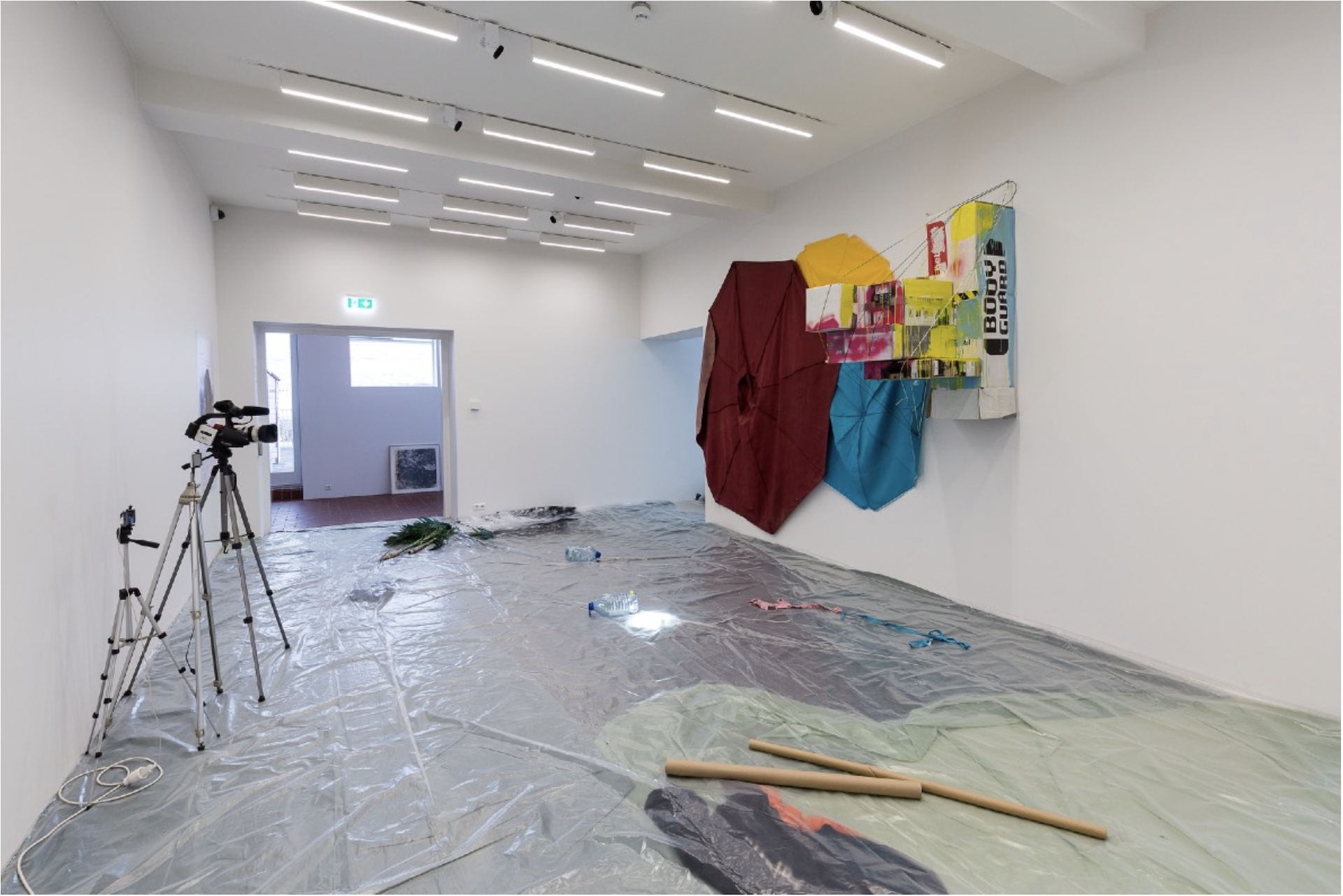 German artist Eckstein (b.1968), who creates by “inverting the outside inward” offers visitors to Akureyri a distinctive twist on the gallery experience. By using the whole floor space, the artist turns the underfoot into his canvas, invoking the “sensory impression” of a monumental, walk-in landscape painting, where viewers are invited to step onto the art itself. Building on his earlier bodies of work, such as ‘On a Shaky Ground’ or ‘La Vague’, Eckstein’s installation explores the emotional conflict between certainty and uncertainty, engineering an environment in Akureyri that both invites and refuses entry. To house this diametric interplay, curator Hlynur Hallsson placed the exhibition in a transitional gallery. The sight of the rooms behind Eckstein’s work offers visitors an unspoken invitation to cross the piece, without interrupting the discord within the exhibition.

“I’m notreallyinterested in anythinggreaterthan life” was presented in two stages, the final version unveiled in a sweeping performance held in Akureyri Art Museum on the 26th October 2019. In a dynamic show, the artist took his floor-centric work and brought it up onto the dividing wall, transforming the dialogue within the space. In this second instalment, spectators witnessed Eckstein mount three parasols, as well as erect his signature cantilevered overhang; a gravity-defying structure built using only cardboard boxes, tape and clotheslines. Drawing on the architectural philosophies of Frank Lloyd Wright and Le Corbusier, he orchestrated a spirited subversion of balance, both structurally and aesthetically, one which served to counter the instability of the terrain below. The cantilever, a style which takes materials and dances them to the point of near-failure, stands as an architectural beacon of unconventionality and dare. A dual ethos invoked by Eckstein, who not only designed an unorthodox structure, but turned the act into a dauntless performance. “I wanted to go beyond borders, beyond what I’ve done before,” says the artist. “I wanted to push myself in front of the abyss.” 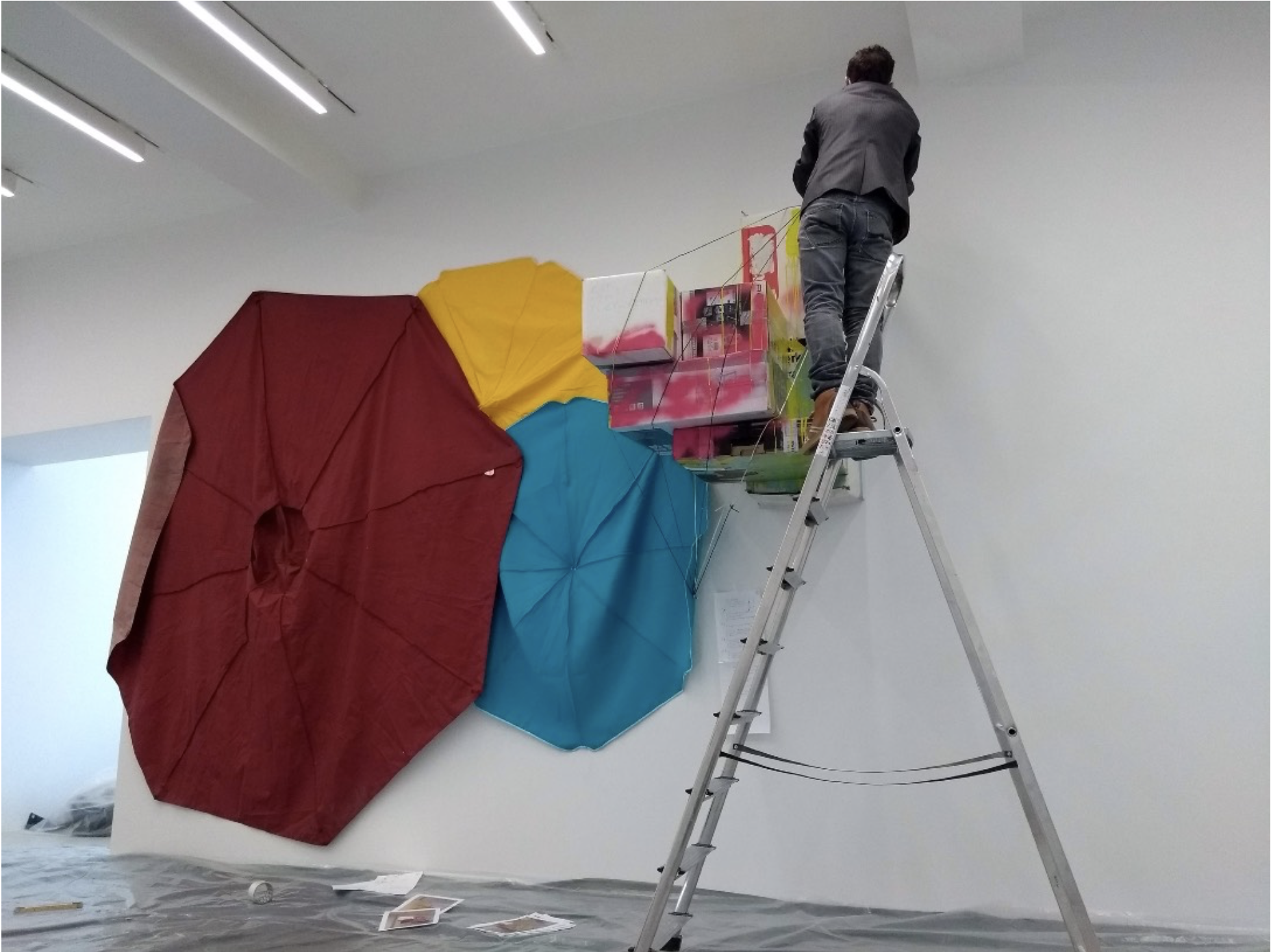 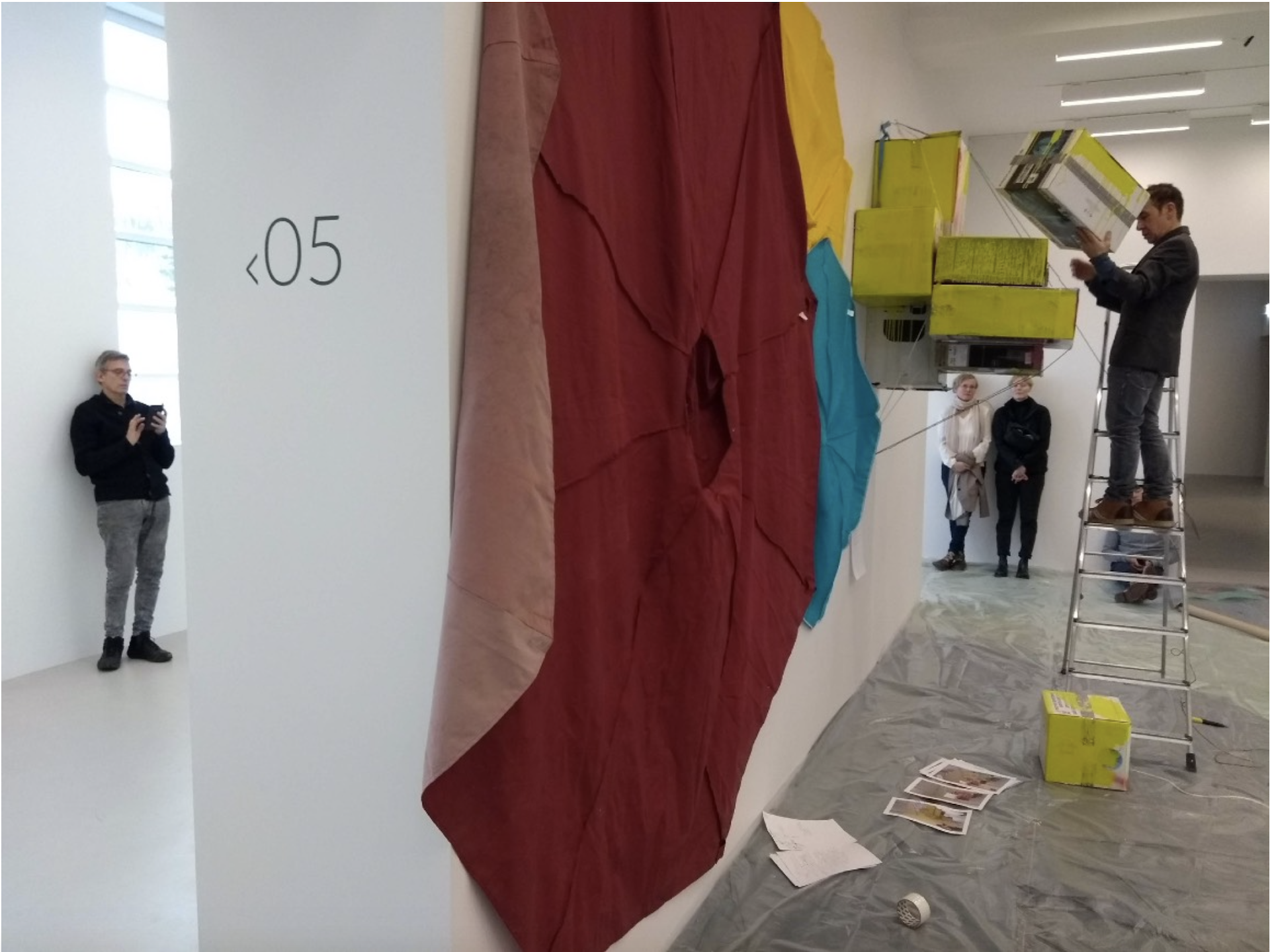 Through performance, Eckstein demonstrates the creative mechanisms behind his work, allowing him “to tell more than just the story of handcrafted set-up.” He compared his installation choreography to that of musical notations, reading his movements like a score. “I went through it in detail imagining step by step,” he recounts. “It was like learning a textbook; trying to figure out how to manage the difficult parts and the edges to come around.” In the vein of an architect, all compacted works he produces come with a set of transferable drawings, ready to install in different locations. He began introducing cardboard boxes early on in his artistic practice, sometimes recording their installation on tape alone in the studio. From this, he notes the natural transition to install in front of an audience, the performance aspect allowing for an element of improvisation. Which makes it “real, re-actable and connected to the situation and time.”

Eckstein’s performance was captured on film the night of the 26th, the show documentation available to watch on iPhones in the gallery. Small and intimate, viewers can lean in and witness post-hoc the installation. These videos, says the artist, “Reflect the history of the set up,” offering visitors hooks of continuity amongst the ephemeral nature of the space. Embedded in Eckstein’s philosophy is the concept of impermanence, creating works, such as performances, that in his words both, “resist time and external influences; eventually only to remain in the mind.” For curator Hallsson, the addition of cameras and iPhones also prompts viewers to think about the transition within the space. Together, he notes, “they allude to how it was before and the potential of what could happen there.”

Rounding the corner into adjacent Gallery 05, Eckstein’s work undergoes a thematic shift. The floor comparatively stripped bare, the focus is moved towards two separate installations. The former, a metal figure bedecked with colourful clothes, the latter, a re-fashioned roll of leftover material. “I was looking for a quotable image,” recounts the artist, whose practice often cites contemporary iconography. “I ended by using a Yves Saint Laurent advertisement I found on the back cover of a magazine. The structure is linked to the Hellenistic sculpture of the Nike of Samothrace, with a comparable posture as well as aspects of the clothing.” 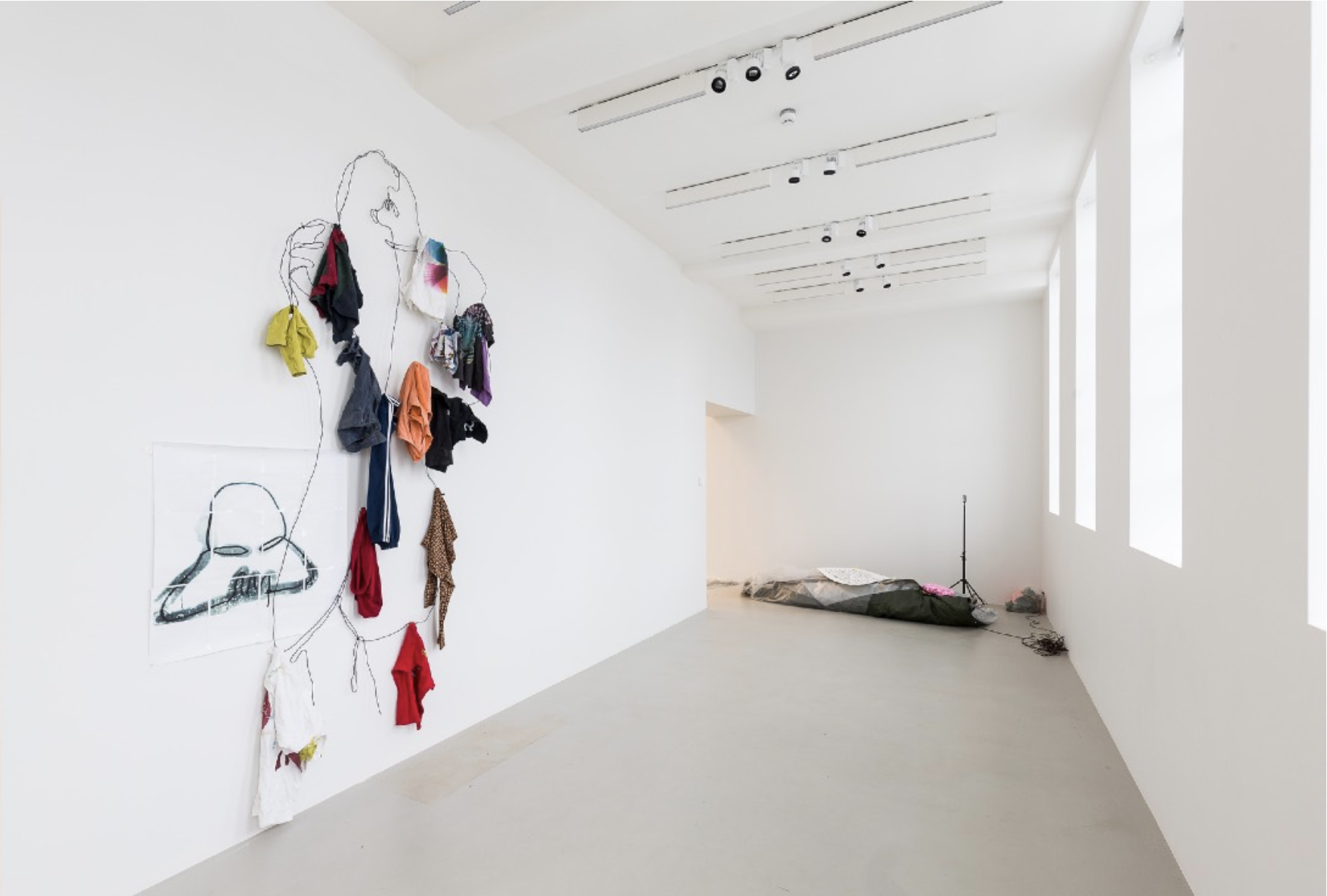 Eckstein often produces versions of advertising logos that are “simplified, rough and raw.” In this instance, he departs from the Saint Laurent design, traces it back to its sculptural influence, before contracting it to its basic form. He uses just the curve of a wire to trace the figure’s outline and alludes to the goddesses famed drapery using only bedraggled clothes. The quotation of The Winged Nike, whose diametric pose has been described as where “violent motion and sudden stillness meet,” also engages with the conflicting environment next door, which both invites forward “motion” into the space and triggers a “sudden stillness” amongst visitors.

Used by the likes of Marinetti as an archetype of beauty, the Nike of Samothrace has been termed “greater than life,” offering an apposite comparison to Eckstein’s work. “I am interested in greatness,” says the artist, “the extraordinary, the extra-large, the super. Life is the measuring scale and there is nothing bigger, so I’m interested in the greatest there is to achieve.”This philosophy is echoed in Eckstein’s title, the artist often using simple words to convey complex thoughts. “The title is loaded with ideas,” he explains, “and this time I wanted the words to be connected to life and size. I tried to change my thoughts into Icelandic using translation machines, converting the words back and forth to get as close as possible to my point.” 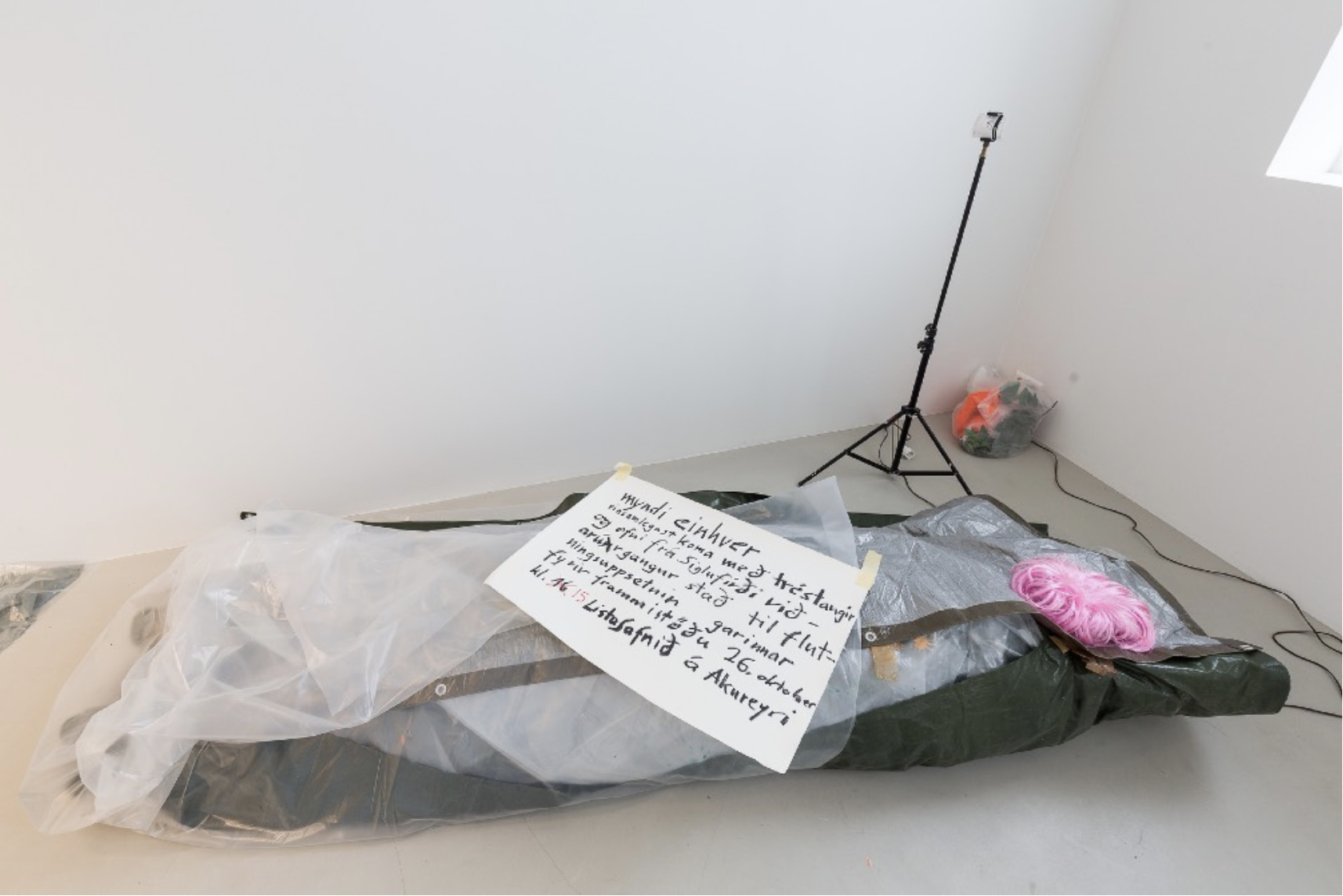 This technique is seen redeployed at the back-right corner of Gallery 05, which houses a roll of excess material furnished with pink wig, tripod and a translated paper sign. “The paper resting on top came with the transport crate,” explains Eckstein. “The museum staff were asked to install it on the central wall in Gallery 02 before the opening of the show and before the whole space was transformed by the later installation performance.” The text was intended to ask people to bring materials on the day of the performance, which Eckstein would then work around and react to. For Eckstein, the inaccuracy of the translation machine renders “something new, dystopian or unexpected” to his words. “In some ways wrong,” he laughs, “therefore being right.”

At each stage of this exhibition there is a sense of suspended completion. Dystopian in its nature and governed by the need to push boundaries, “I’m notreallyinterested in anythinggreaterthan life” will take your stance and turn it on its head. “This show is like a process” says director Hallsson, “and that’s what’s interesting about it.” 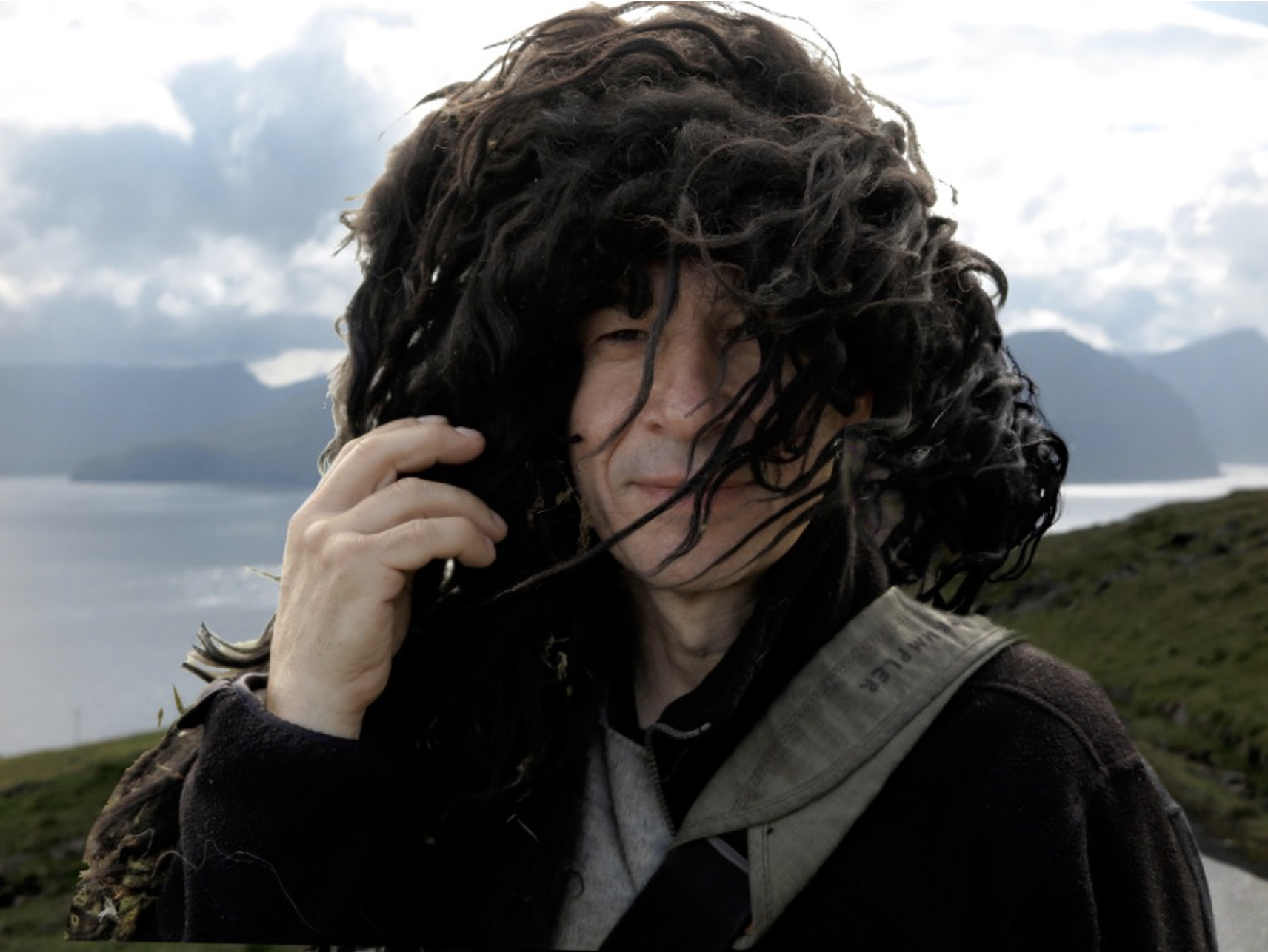 Knut Eckstein’s show I’m notreallyinterested in anythinggreaterthanlife will be on display at the Akureyri Art Museum until 20/01/2020.