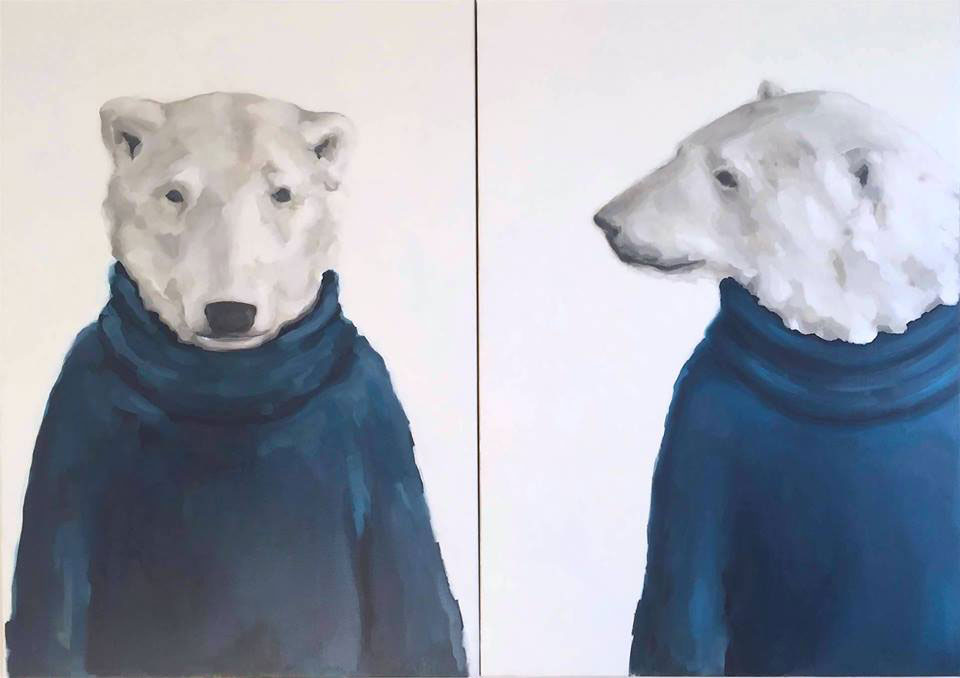 Vulnerable and endangered animals are Halla Gunnarsdóttir´s subject in her exhibition Look at Us. Halla presents 27 oil paintings, all of which portray vulnerable species. The animals are shown with distinctively human features and placed in often humorous poses, settings and situations that strive to evoke an emphatic link between the subject and the viewer. By anthropomorphizing its subjects the work hopes to show that what separates us from animals is very little and, at the same time, to communicate the gravity of the man-made crisis they face.

In the past few years Halla´s body of work has focused on conservation and vulnerable animals, inspired in part by her travels, for example to Antarctica and Indonesia. In September 2015, Halla traveled to the Arctic with a group of scientists and nature photographers to raise awareness of the effects of climate change on the region.

A central tenet of sustainable thought is the need to protect biodiversity, a concept used to define the diverse nature of our habitat. Biodiversity is fundamental to the survival of species and habitats that together make life on the planet. Today we are witnessing an ever greater erosion of biodiversity, which has far-reaching effects on the world’s natural environment and hence on our well-being.

Human interference in the ecosystem is one of the greatest causes of disruption and change in natural habitats. This includes agricultural systems, construction, the mining of natural resources, as well as the depletion of forests, seas, rivers, lakes and soil. It also results in the invasion of foreign species, pollution and climate changes that today are called global warming.

Halla’s figuratively presented animal subjects engaging in human-like actions provoke an emphatic reaction in the viewer. A close look at the paintings strengthens the sense that the distance between humans and animals is not significant. Her work is thus a powerful reminder of the importance of treating nature and animals with respect. This is true everywhere, even in areas like the Arctic where very little life thrives. The exhibition demonstrates that the artist’s travels and studies in the region have had a profound influence on her work. She succeeds in communicating to the viewer the importance of actively participating in conservation efforts.

The most important element in future conservation debates should be the concept of sustainable development. The logic behind it is that in their constant quest for progress and harnessing of natural resources, humans must not deplete natural reserves to the degree that we leave the next generation with a damaged environment.

Polar bears are among many vulnerable species whose lives are in danger from the changes caused by the melting of the polar caps in their natural habitat and which have eroded their chances of feeding themselves. It seems logical that the Icelandic public should care about the danger that many animal species now face. But Árni Stefán Árnason, a lawyer who focuses on animal rights, believes that widespread ignorance characterizes attitudes towards animal rights and conservation. This lack of respect is demonstrated when polar bears are killed when they drift here with Arctic ice. He has pointed out possible solutions: in Canada, for example, when such an event occurs a team is dispatched in a helicopter to shoot the animal with tranquilizers. The animal is then transported to more distant areas. Árni has pointed out that animals that arrive here can be transported back to Greenland using this method.

There is an ongoing debate on what should be done with polar bears that drift to the country. But regardless of people’s opinions it is important that the government formulate a future policy for action since the odds of polar bears drifting to the country have increased with the warming of the seas. An action plan that safeguards biodiversity and protects endangered animals is needed.

Changing circumstances call for a revision of the values and ideas we build our society and economy on. It is important to build on the ideology of sustainable development in which the economy, social equality and environmental conservation join to ensure acceptable living conditions for all inhabitants of the planet.

Works of art are well suited to raise awareness of sustainability issues. The philosopher Sigríður Þorgeirsdóttir discussed the relationship between words and images in her article Long and Short Shadows: The Truman Show. The article is a philosophical meditation on reality and artificial reality. She quotes Herbert Marcuse who believes that men live in ‘a society of organized stupidity […] consumers who are fed by the media and made one-dimensional.’ She points out that Virilo assumes that the image has become more powerful than the written word. The language of images is subtler than the written word because it has easier access to our sensibilities. So long as our eyes are open we are open to visual stimulation, but to read we have put ourselves into a particular state of mind.

The arts are an important part of Education for Sustainability. Such education has to build on a moral foundation that can create a general change in attitudes and lead to a brighter future for all. The arts can affect our emotions, give us inner peace, cause tension, inspire new ideas, provide advice, arouse empathy, make us angry and disturb viewers. The arts can change attitudes. All of the above is true of the work exhibited in Look at Us.

Halla’s exhibition shows that we are here in the hands of a well-educated practitioner of the arts. Halla began her art studies at the Florence Academy of Art and completed an M.F.A  in figurative sculpture from the New York Academy of Art in 2003. On graduating she was awarded the NYAA Sculpture Research Fellowship. She also holds a B.A in Liberal Arts from the New School in New York and an MBA from the Sorbonne in París.

The composition and treatment of colour in the exhibition’s works have a powerful effect, to some degree reminiscent of mid-century art. It is not surprising that her background is in Italy.

Halla is rapidly developing her visual imagery and hopefully she will continue on that path, whether in painting or sculpture.

Ásthildur B. Jónsdóttir
Assistant Professor at the Iceland Academy of the Arts