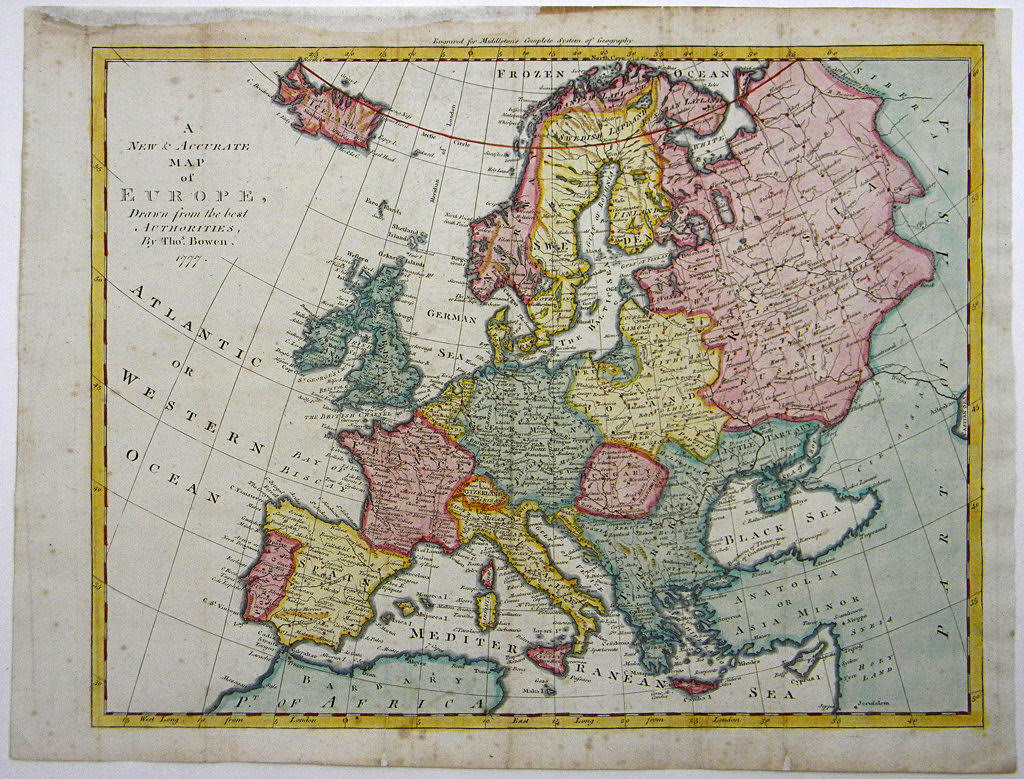 Like an intricate seam, there are three layers of cultural thread which stitch Iceland’s art scene together with Europe. The first thread is interwoven through the individuals; the fibres shaped by the artists and the personal Euro-Icelandic connections they forge. The second thread is bound by the institutional exchange, which links museums, art centres and universities, both on local and international platforms. Operating in conjunction and of a more ephemeral nature, the final thread is composed by the reciprocal dialogues between art festivals and biennales; the layers of this seam, together, forming a complex network with Europe which is in a constant state of flux and evolution.

For Icelandic artist and director, Steinunn Önnudóttir, the foundation of this exchange runs deep through individual connections, the tethers of which always pull Icelandic artists back to their homeland. “It’s through artists from Iceland,” she tells me, “moving abroad to Europe, making connections, and trying to maintain these links once back home. That’s how the basis of this exchange functions, on a very personal level.” Önnudóttir states connections as important everywhere, but notes the prominence these interrelations take on when engaging in an art scene as small as Iceland. Within this close-nit framework, French-born artist Claire Paugam recounts how vital it is for individuals to exhibit abroad and build connections within Europe. “In bigger cities” she tells me “the art scene has many layers, with many kinds of artists, art works and galleries, so there are multiple scenes within one. But here, in the arts community of Iceland, these layers become integrated, so you could be exhibiting with everyone.” In this respect, she says “there’s a real necessity for artists here to travel.”

On the reverse side, we are also seeing increasing numbers of artists and curators starting to pass by Iceland on their way to Europe or America, often including a stop over at the university to give a talk or meet with students. “In every art scene” Paugam explains; “you have the core of artists, physically there, making projects and directing museums …and then you have this fluidity, this stream of people and influences from all over coming in.” In the case of Iceland, this external cultural traffic takes on a seminal role; injecting dynamism into the scene, providing new fountains of influence for the artistic core, and most prominently, aiding artists to forge connections and gain exposure internationally. “So in that sense, there are many individual dialogues” says the artist “It’s buzzing with energies and people coming from all over the world to shake up the scene.” Paugam, who has developed her practice in both Icelandic and European contexts, comments on the subsequent benefits this foreign exposure entails; “In turn” she says “there is a real interest for the Icelandic art scene, because I think it passes on this trend of Iceland as this beautiful, curious place.” The unique draw of the land of ‘Ice and Fire,’ a land which has become almost synonymous with myth, opens opportunity to exhibit in Europe. As Paugam tells me “people are inquisitive, they want to see.” 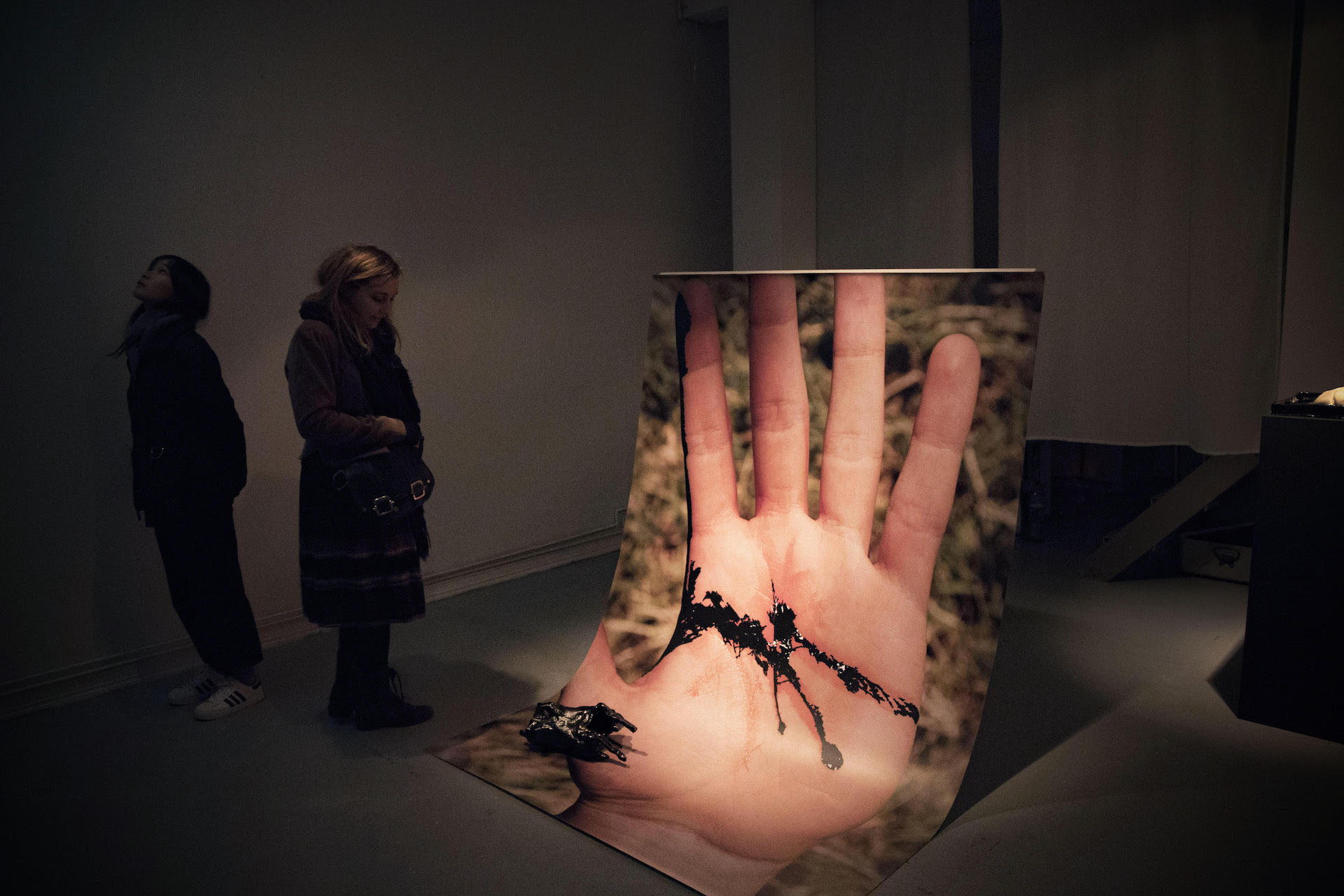 Rising to an institutional level, the exchange between Iceland and Europe invokes a longer standing lineage. The current Director of the Icelandic Art Centre (IAC), Helga Björg Kjerúlf, echoes this view, stating that the museum sector has been witness to a “constant Euro-Icelandic exchange, both on the conceptual level and on the formats of the exhibitions.” Historically, says Kjerúlf, “the community of Icelandic artists and curators in Europe has been very active, and this continues to create a vital feed into the local scene.” Iceland also has a particular status, the director explains, relative to its connection with Nordic and European cultures, as well as its proximity to the Arctic. Given the complex space the country occupies, Kjerúlf emphasises the role the IAC plays in assisting the promotion of regional artists abroad. There are some great figures stepping onto the stage at the moment, she tells me,“many of which have been carving a space for Icelandic arts. The role of the IAC is to work with and also represent these less heard voices.” Within this ethos, she states; “we strive to keep our eyes open to the younger generations.” To facilitate future discussions between Iceland and Europe, she plans to offer guidance to artists on ways to promote themselves abroad using digital mediums. “There is a lot they can do themselves only by being visible on Instagram for example.”

Due to its status and separation as an island, Iceland’s position within the international art dialogue has historically proven enigmatic. “People used to rarely pass through here” says Steinunn Önnudóttir. “In Europe, young emerging artists are able come to this point where they are travelling and exhibiting in many institutions, but even now, this communication still struggles to reach us.” The geographic disconnect naturally leaves Icelandic artists to contend with low exposure rates, as Paugam raises “You feel a bit isolated on this island…how do you get to be known elsewhere?” She calls for a push on more funding from the government and resources to be pooled into hosting artists at home and abroad to enable these institutional links. “Exhibiting in Europe is a privilege” she tells me “a beautiful opportunity” and one that needs to be fostered. She comments on the progressive steps that have already been made, but notes the room there is to evolve. The push on funding is one echoed by all the artists interviewed for this piece. “There is the will” I was told “we just need the way.” On the art festival layer, the exchange between Iceland and Europe grows dense. Iceland’s position on the global stage is one that is in a constant state of evolution, both in its engagement abroad and its creations at home. “The biggest change I have seen has been on the festival side” Kjerúlf reinforces „not only the curation of the exhibitions is more international, but we are also offered more guest talks and international projects…this is very exciting.” In 2017 and 2019, she worked as the Social Media manager for the Icelandic Pavilion at Venice, a role directly responsible for the promotion of Icelandic arts within the European discourse. “Both projects had a very positive public reception from the start” she explains. “This year’s 2019 installation by Shoplifter gave you a unique sensory experience, almost overwhelming. The challenge as a social media manager was to translate this atmosphere and document something so immediate and physical. The Icelandic Pavilions, thanks to a long series of artists doing very ambitious and liberated projects has carved itself a special place in the Venice platform. The event is now a major part of the Icelandic creative landscape” says Kjerúlf. 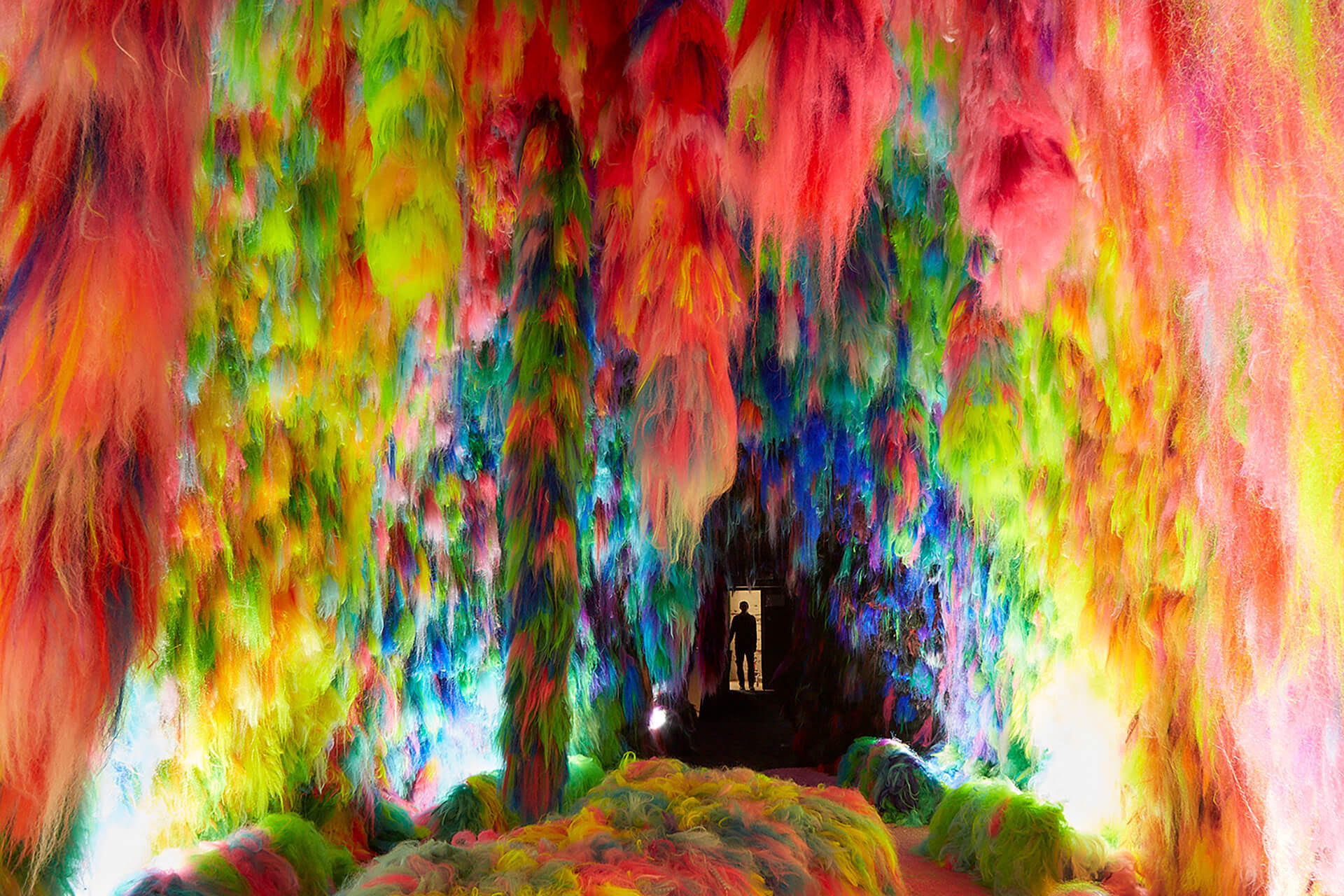 Back on home-turf, these art festivals mark animated creative periods on the Icelandic calendar and attract visitors from all over Europe. “I think they’re incredibly important,” adds Paugam, an artist who has moved in both the international and national biennale circuits. “Their temporality is a very interesting concept, it adds a lot of dynamism and liveliness to the scene.” In the upcoming weeks, Paugam’s work will be on display as part of the Sequences Off-Venues programme, the Icelandic arts festival that is increasingly being referred to as the ‘Icelandic Biennale.’ I ponder if the rebranding of this festival in the Eurocentric model is one of intent, or something that has grown naturally out of the event. “The term Biennale is so prestigious,” Paugam tells me, “people hear the name and their ears start ringing.” There is no doubt that the attachment of this name will garner more attention from abroad and legitimise the cause.

It is interesting to consider the magnitude and longevity of the Biennale models, in comparison to the off-centre festivals which are steadily developing in Iceland and forging connections with Europe. One such example is ‘Plan-B,’ held in the small fjord-side town of Borgarnes; the first contemporary art festival of its kind to hit West Iceland. This grassroots event is one that offers lively and experimental venues for international artists to push their practice to its limits. With their open-call, they offer artists of all backgrounds the opportunity to inhabit more rural areas of Iceland with art, using abandoned farms and old slaughterhouses as the scene of their exhibitions. Paugam, who participated in 2017, notes the “progressive and generous” model used by the founders, whose funds are pooled exclusively into the artists and exhibitions. By putting the artist at the centre of their work and creating something off-beat, Paugam predicts Plan B, and those like it, will grow bigger in the years to come, forging connections abroad and offering a distinct rural platform for Icelandic artists to step up and out onto the international arts arena. “Everybody gets to have a voice, which is pretty inspiring.” 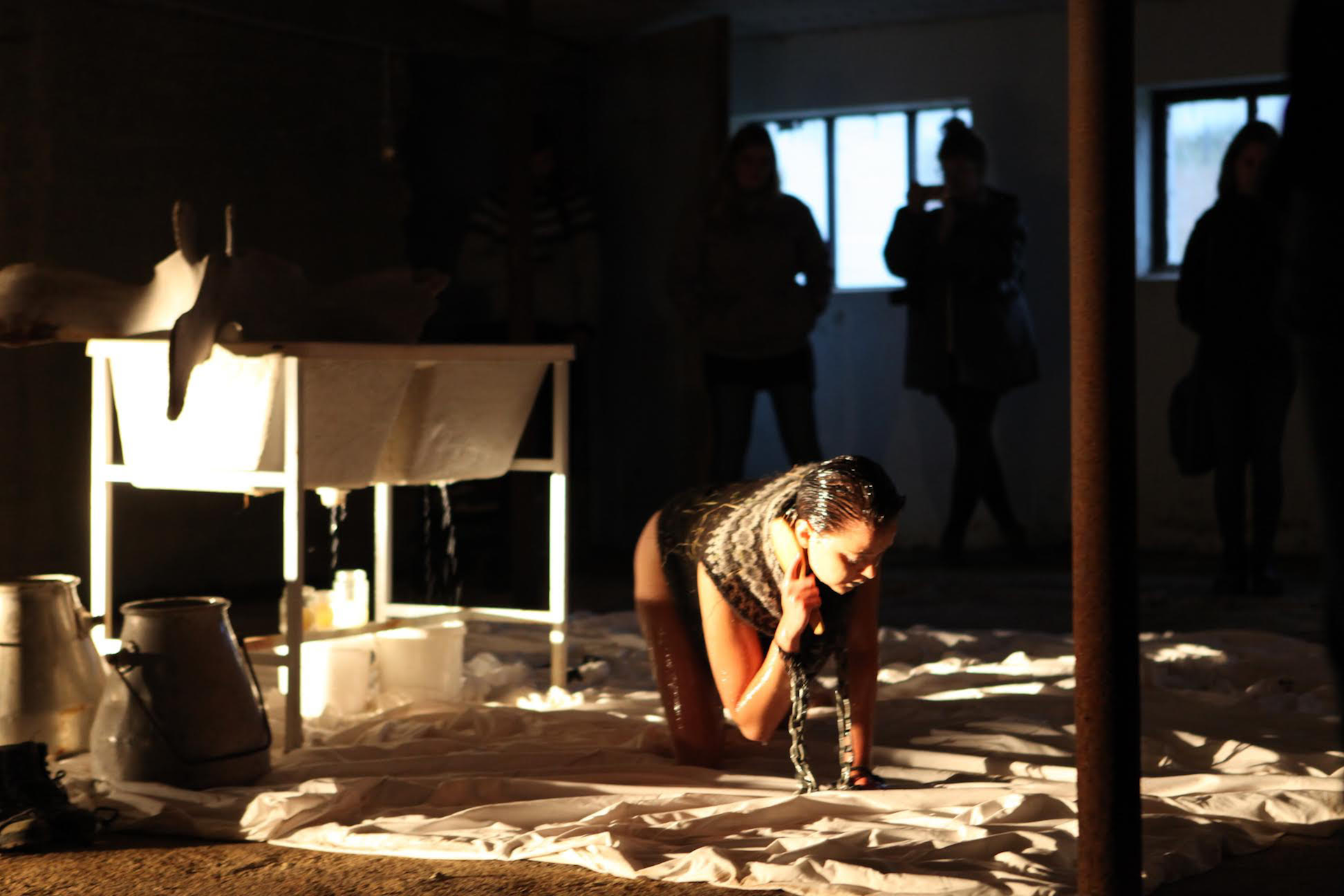 Drawing all these threads together, it is clear that Iceland’s dialogue with Europe is multilayered, and one of ever evolving-complexities. From individuals forging connections, institutions showcasing the fruits of these conversations and with Sequences on the horizon, what stands to reason is that these ties will continue to grow thicker and increasingly sophisticated. Set against the backdrop of a rising globalised world, one where modern technology is ubiquitous, Iceland no longer finds itself set apart from Europe, but at the forefront of this exchange. The only question left is where this international conversation will take us.