In the Beginning. Again 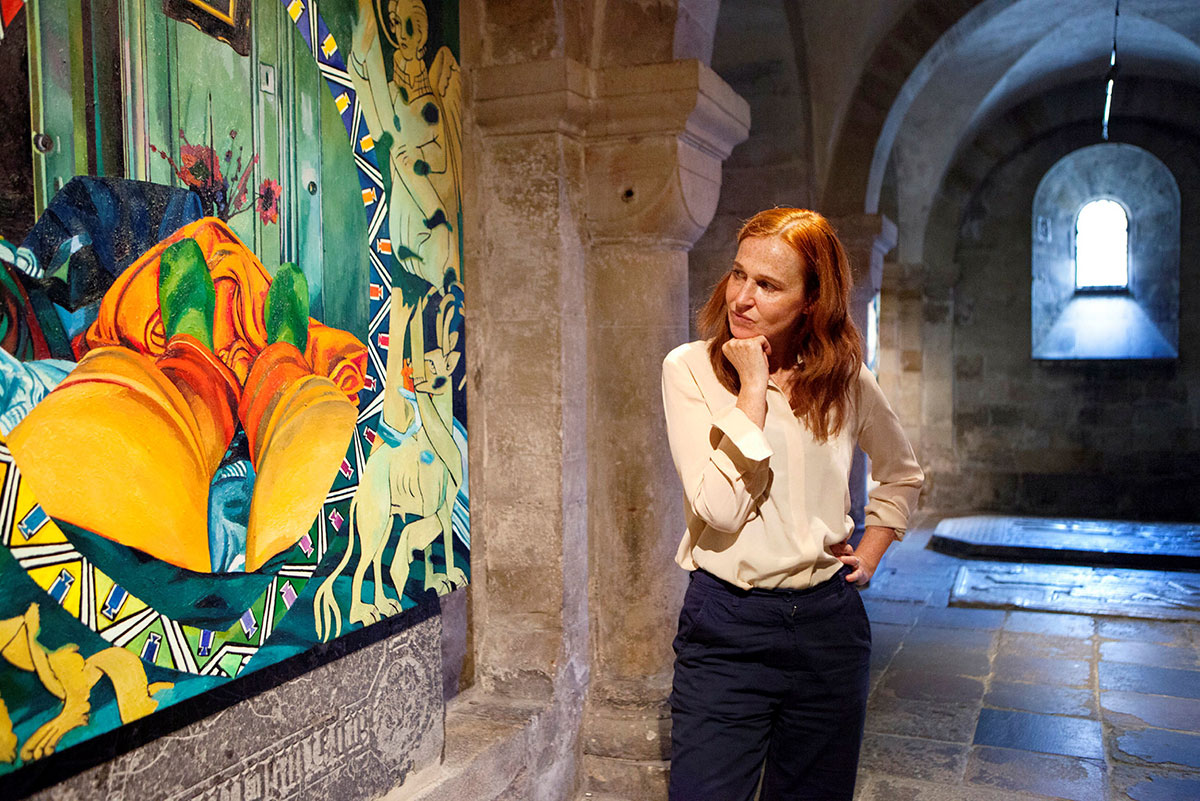 In the Beginning. Again

The question of creativity is a recurring theme in the work of Erla S. Haraldsdóttir. One might say that Haraldsdóttir ceaselessly challenges the idea that an artist can create ex nihilo (out of nothing) and questions the romantic notion of “divine inspiration”. For many years, she has been creating fictional systems as tools for her artistic process, as is perhaps most apparent in her paintings. Her method is motivated by an urge to create a space of artistic freedom through self-imposed restrictions,­ such as instructions given to her by friends and colleagues or specifically devised systems. Her works are often the result a sampling of art-historical references that displace the western-oriented hegemony of art. Their themes reflect on the wider question about the beginning, about getting started. How to choose where to start when you could start anywhere? In a conversation, Haraldsdóttir once described the white canvas as a wandering planet without a sun to circle around, implying that the artist must invent that sun or system defining the orbit of the work.

What better way to proceed, therefore, than to choose the beginning of the beginning as a theme? As its title suggests, Genesis is centred on the story of creation as it is told in the monotheistic Abrahamic religions. It is a familiar theme within western church art and a common subject of commissioned and self-determined works by artists and artisans throughout history. Haraldsdóttir already began with that beginning once before – this is indeed the second time in a short while that she is presenting a series of paintings about the story of creation. The first (Hallgrímskirkja, Reykjavik, and Konstepedimin, Gothenburg, 2016) took its cue from the Íslenska teiknibokin, a compilation of medieval drawings made by Icelandic artists between 1300 and 1500. Haraldsdóttir’s paintings, which recall medieval stained glass windows, were composed on a grounding of complementary colours to the effect that the colours seem to glow from within. 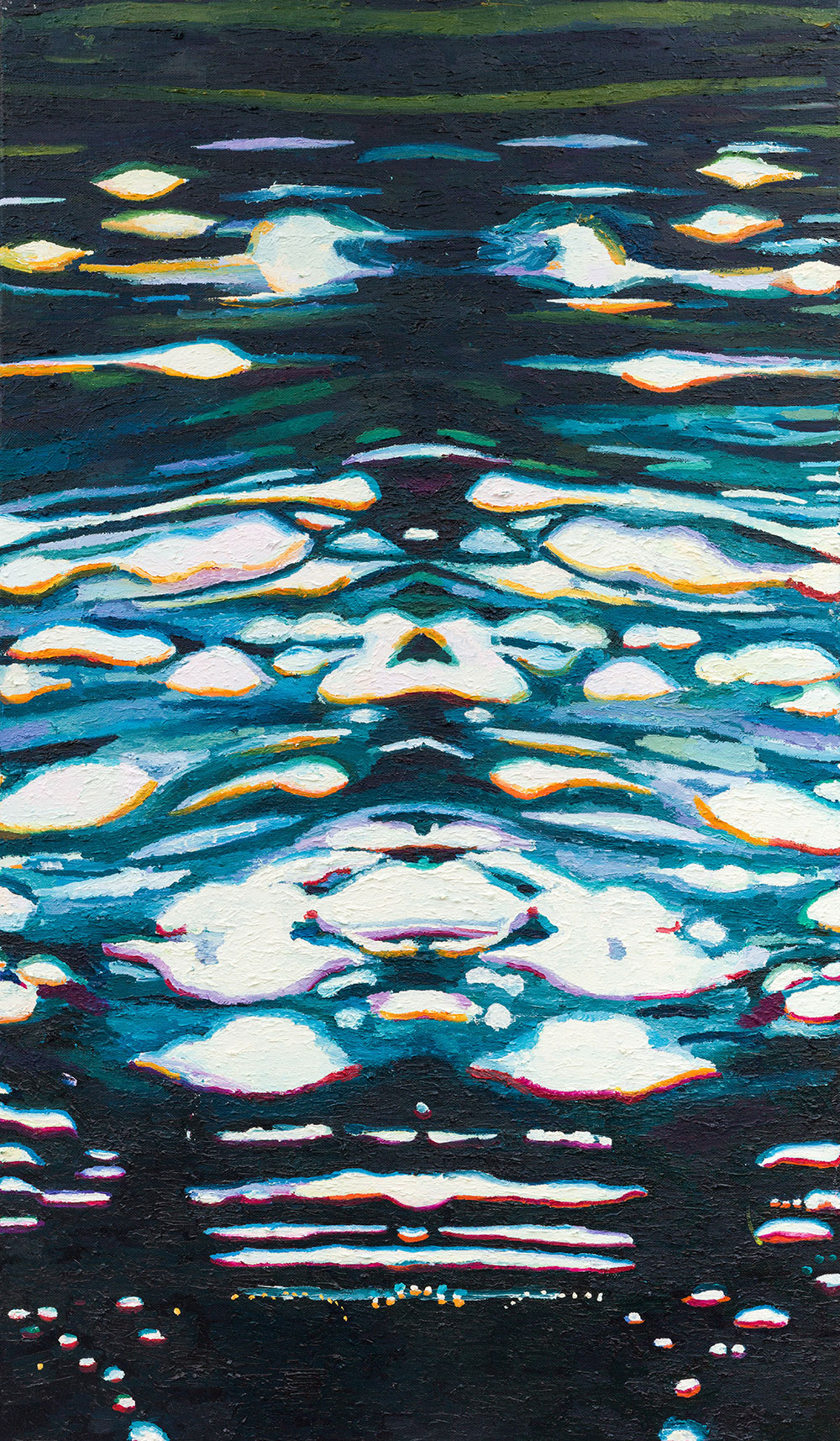 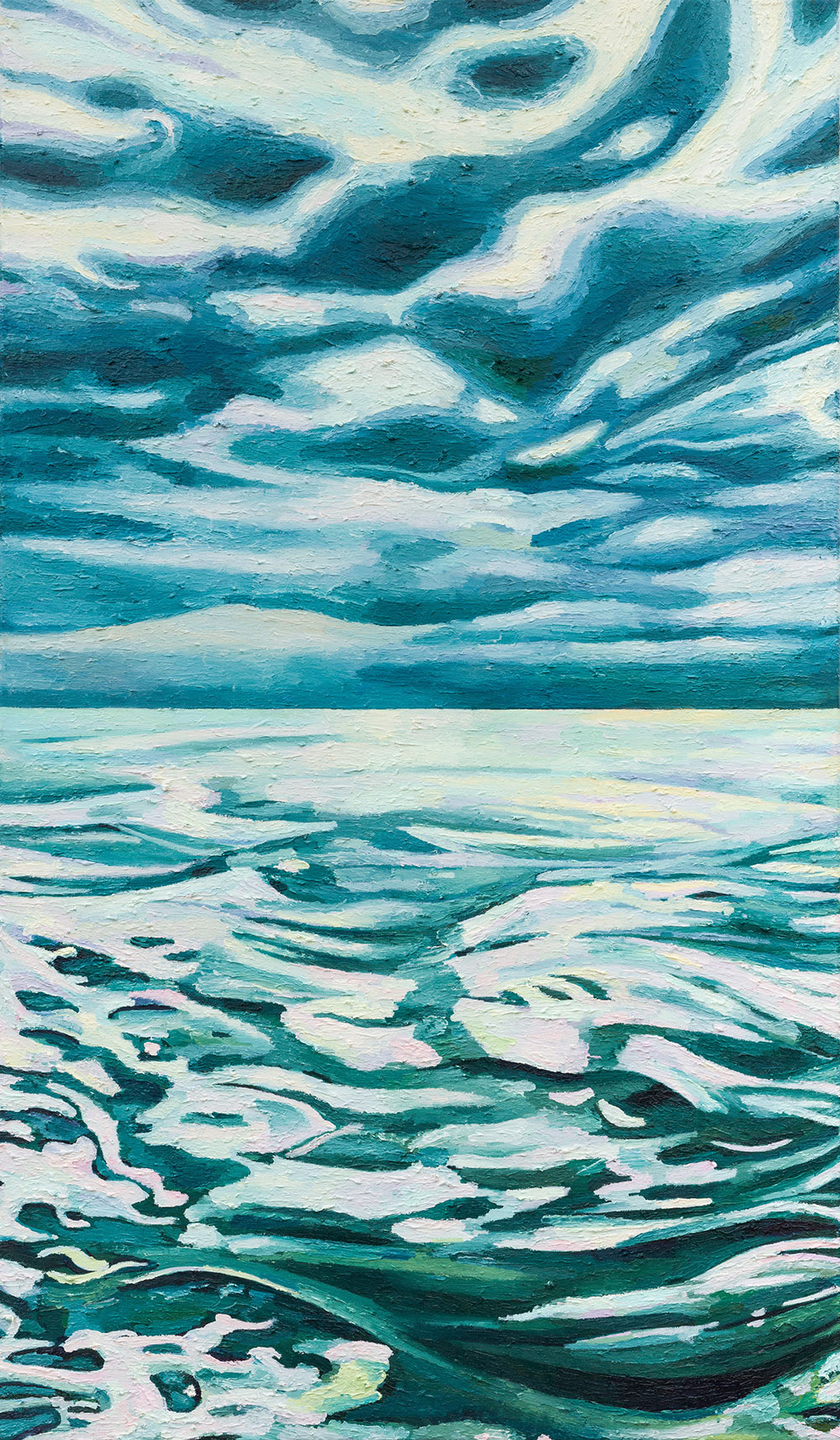 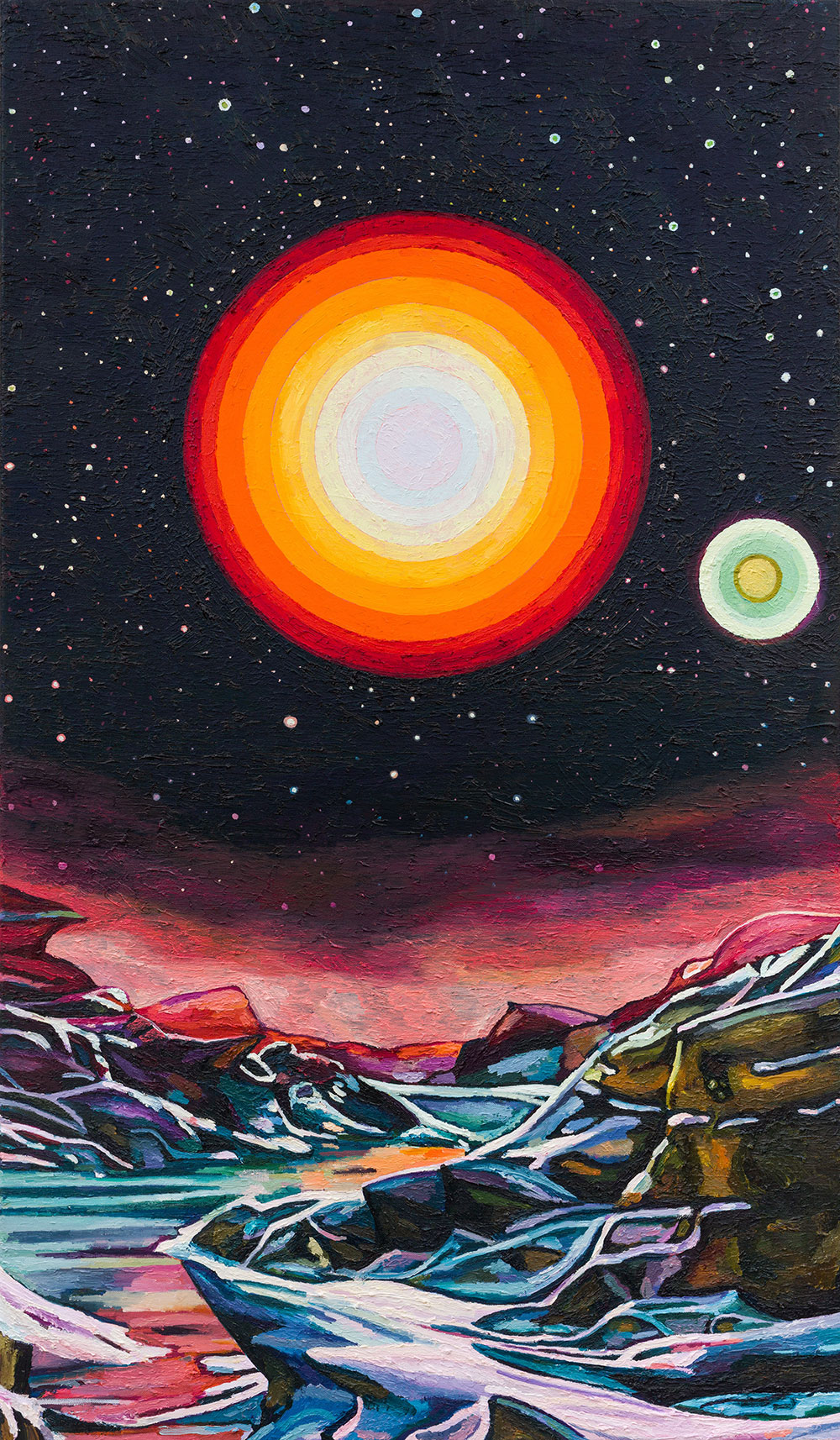 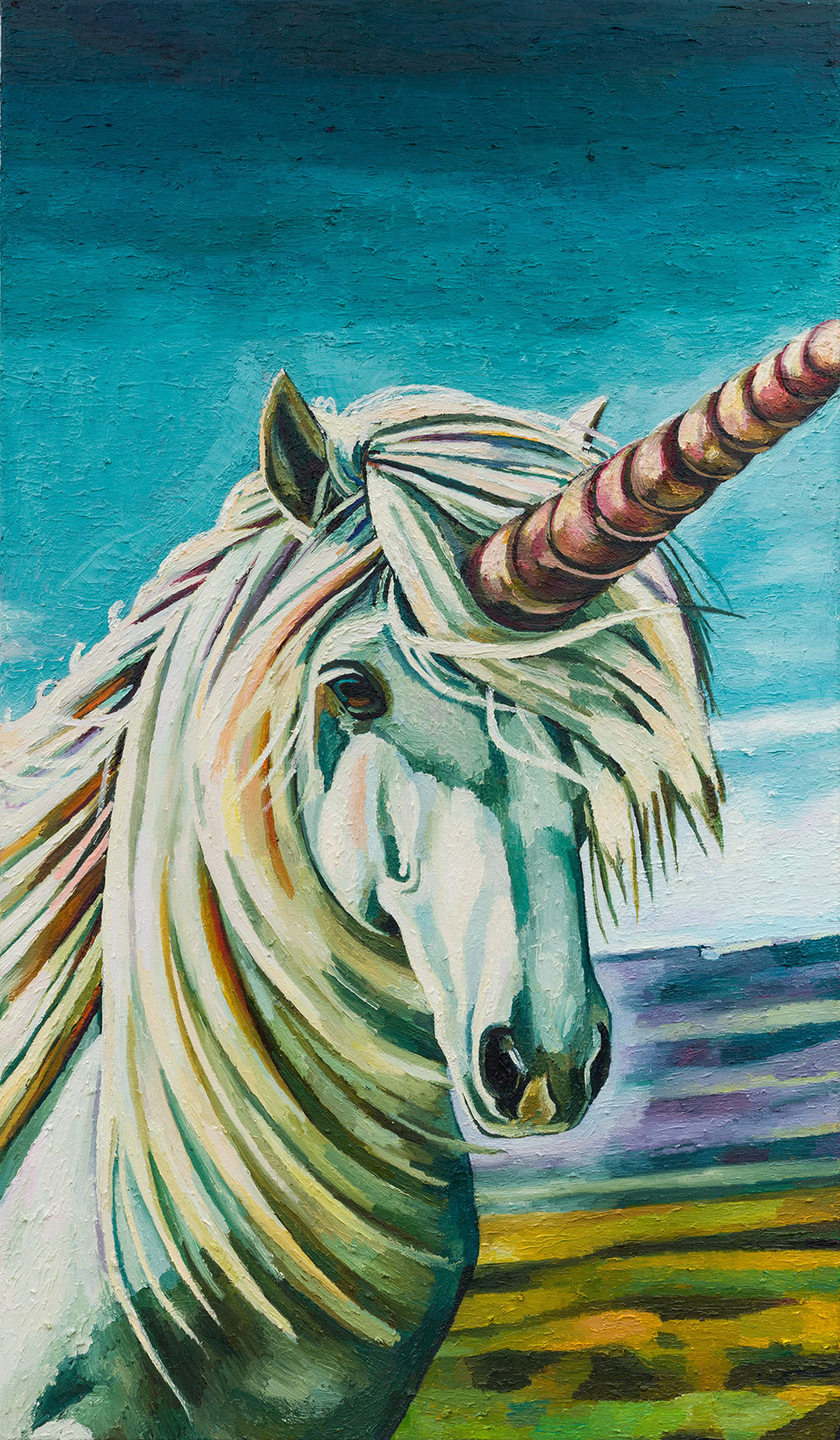 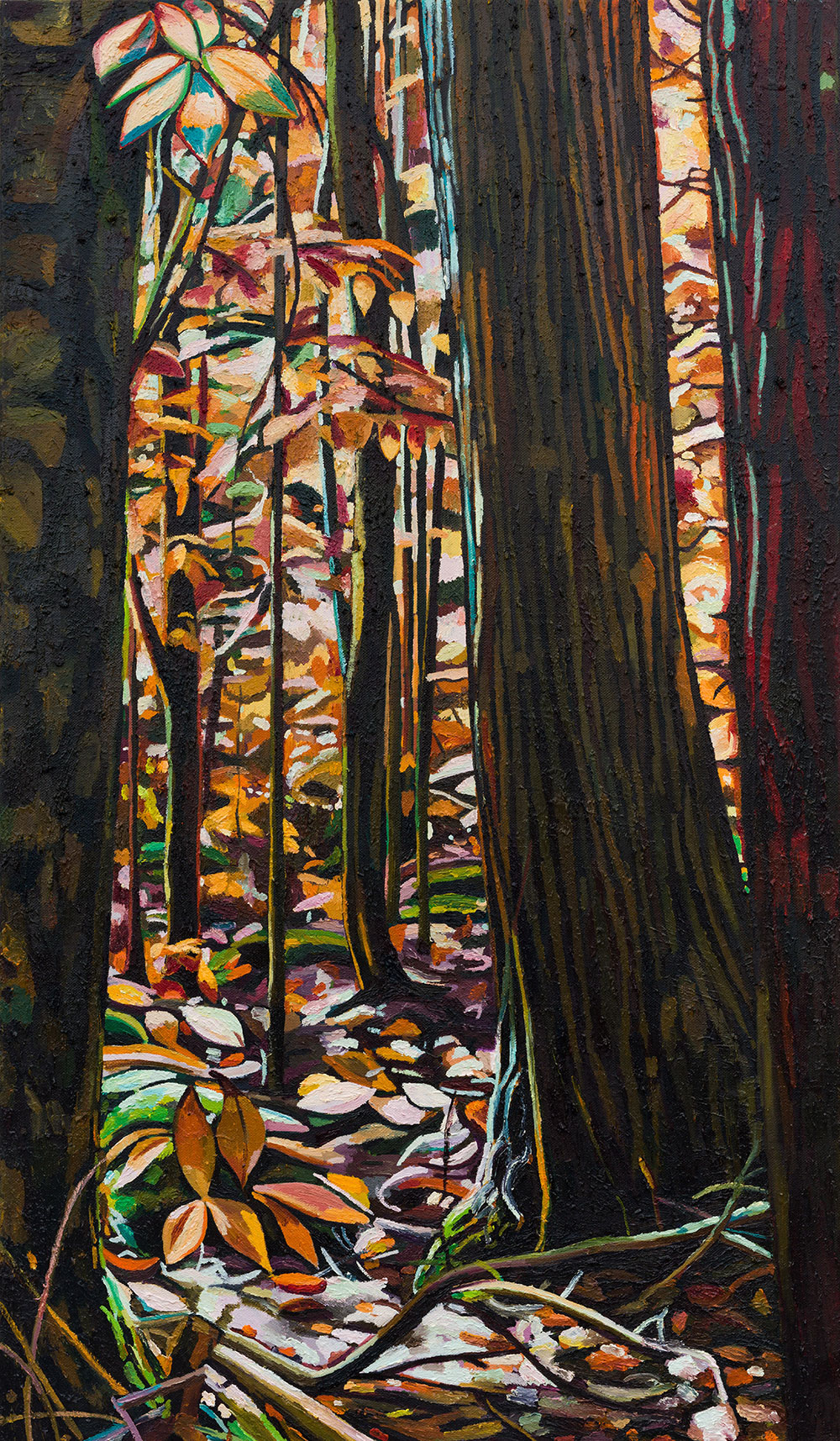 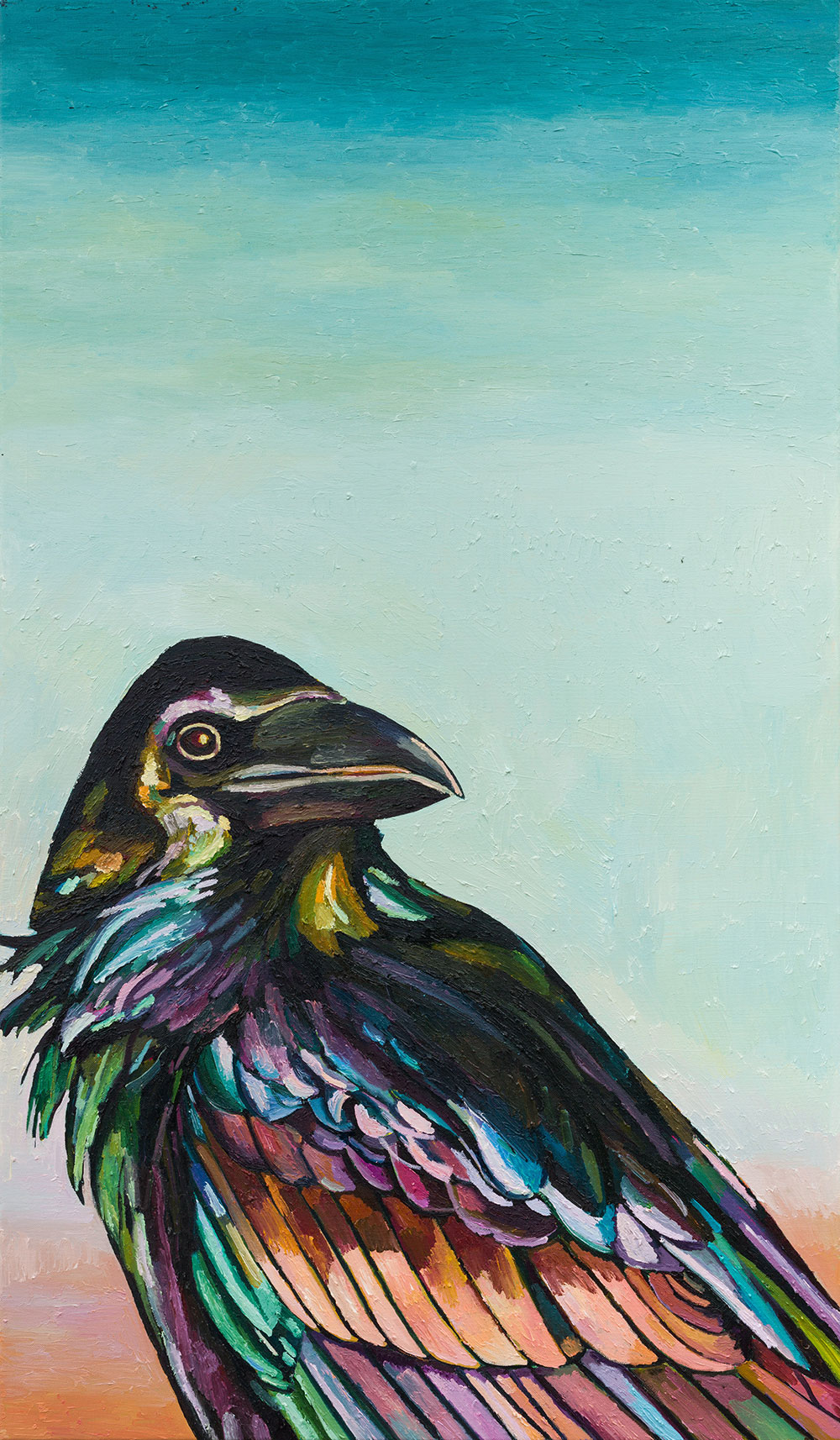 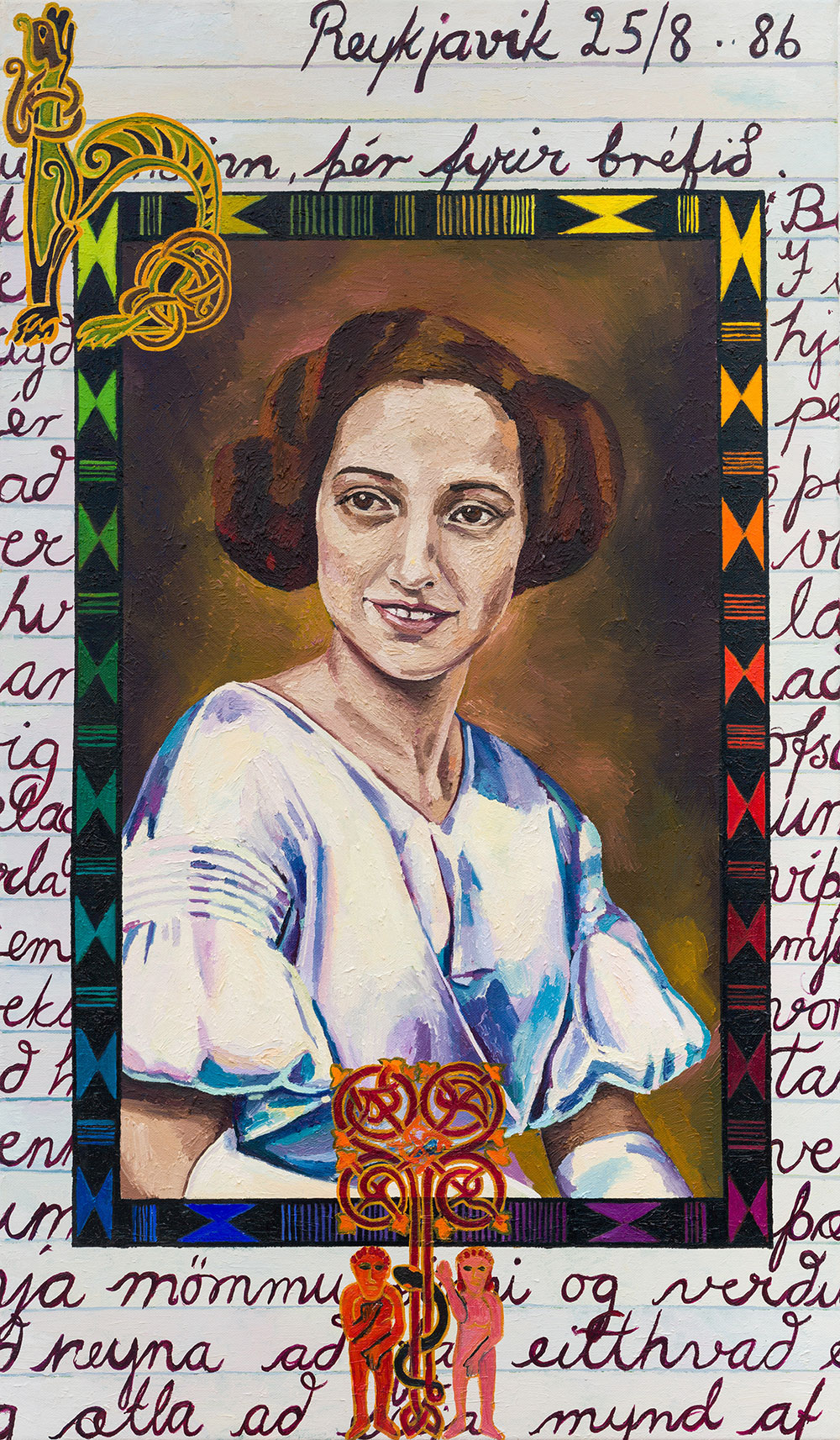 For Genesis, Haraldsdóttir has refined her motifs. When, with her characteristically bold and rich palette, she addresses the story of creation, she also reflects on her own creative processes. We recognise several elements from the story of the origins of the world, but also from art history as well as recurrent details from the artist’s own imagery. Reflections, water mirrors, plants, the Icelandic horse and the crow are intertwined with art-historical quotations and personal snapshots. At first sight, the Fourth Day resembles an album cover or a velour poster from the 1970s; the colourful frame surrounding the unfashionable portrait of the artist’s mother is based on a pattern used by South African Ndbele tribes in jewellery and murals; and the Icelandic horse of the Sixth Day is a paraphrase of a work by the Icelandic painter Þórarinn B. Þorláksson. Despite this rich world of signs and references, it should perhaps be emphasised that the image itself is not what guides Haraldsdóttir’s creation. One can certainly say that she works with symbolic and figurative painting, but as far as painting itself is concerned – the creation of the image – this exhibition demonstrates that the way the image comes into being is as relevant to her as the final result. In other words, the body of the painting, the texture, is even more important than the subject matter. Haraldsdóttir does not make a painting of something; rather, she paints something into existence. The image appears through a mixture of oil and pigment on linen cloth, and it is the movements of the hand that generate the image.

Rather than fighting the materiality of the paint, the texture is part of a process in which pigment and oil shape the outcome. From translation, creation turns into transformation, a series of events that allow the strokes of the brush to bring a breath of wind to the pictorial landscape. Painting is a desire to exist in the moment. And we desire the moment, because the moment, when it happens, can be a new beginning. Perhaps this is why Haraldsdóttir has chosen to stray from the linear story that presents seven evolutionary steps in the creative hierarchy of development. Instead, the tranquility that characterises each of her paintings induces a new beginning. There is a contradictory chronology in the drawn-out temporality of this series: a mountain emerges from the mirroring water, and the eye of the rainbow-shimmering raven reflects the sun in the previous painting. 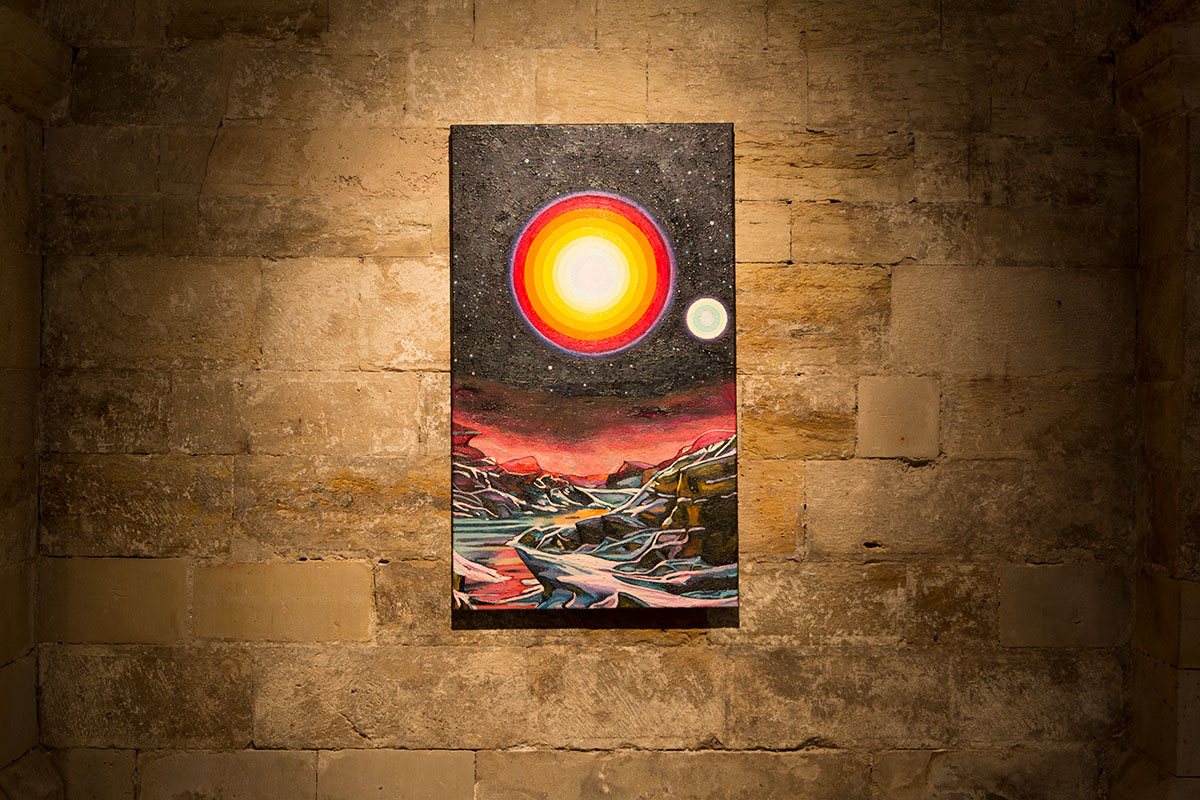 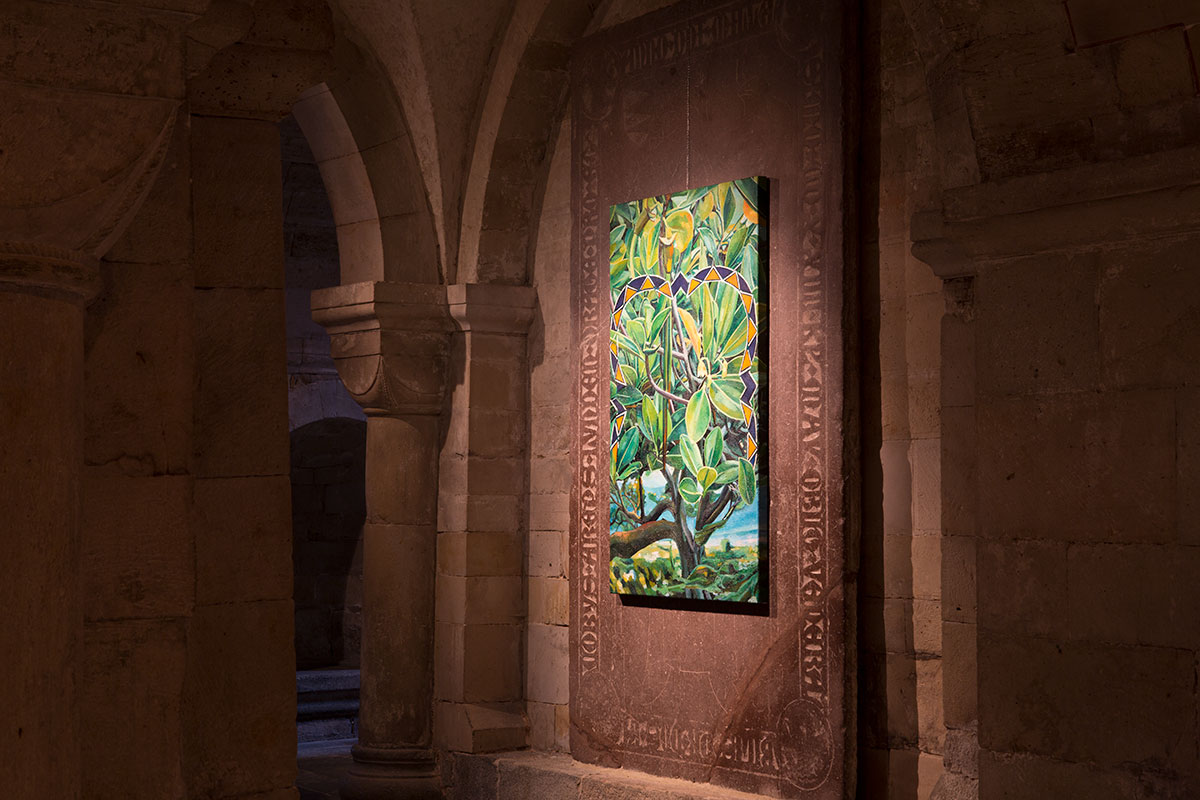 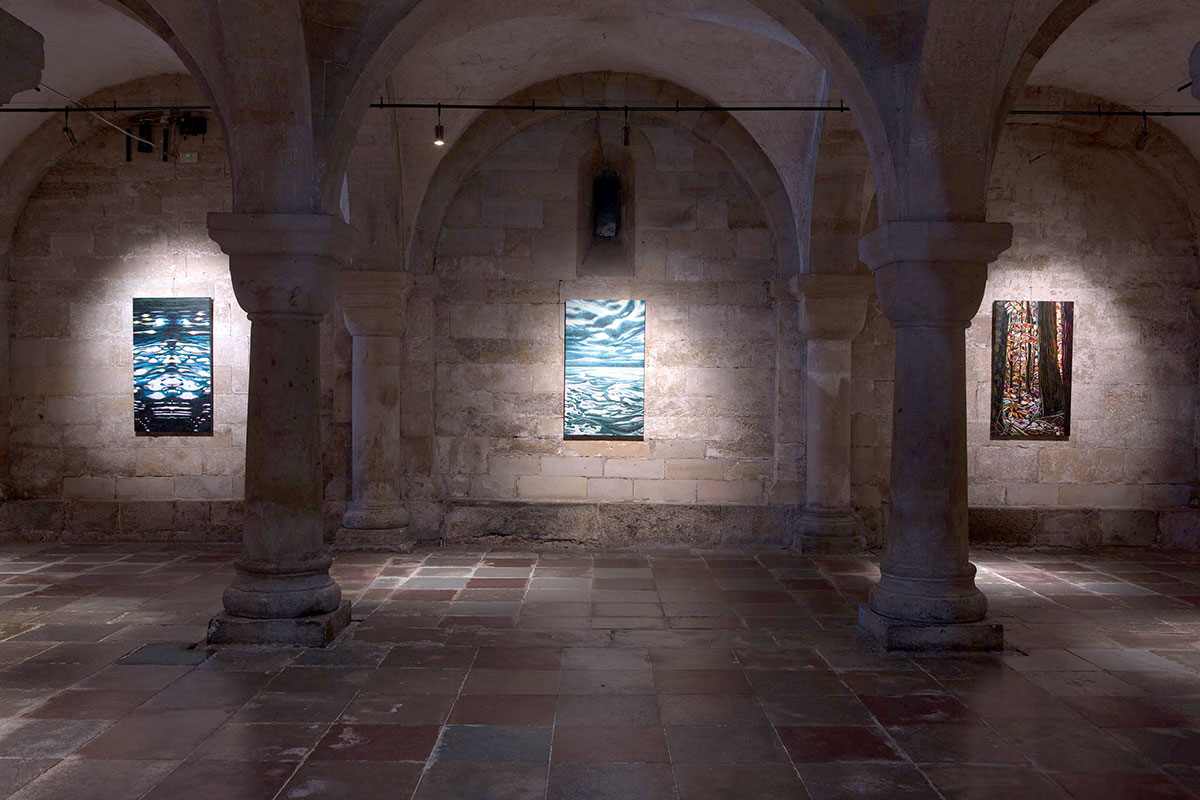 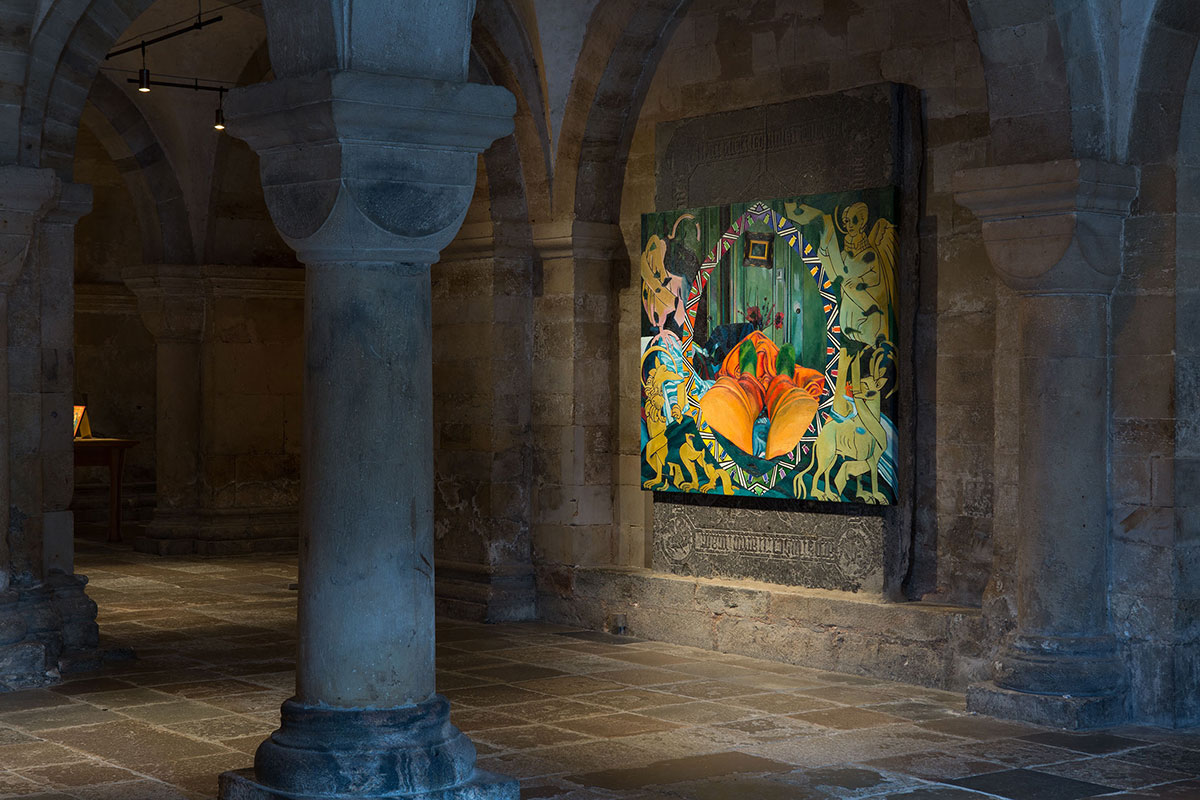 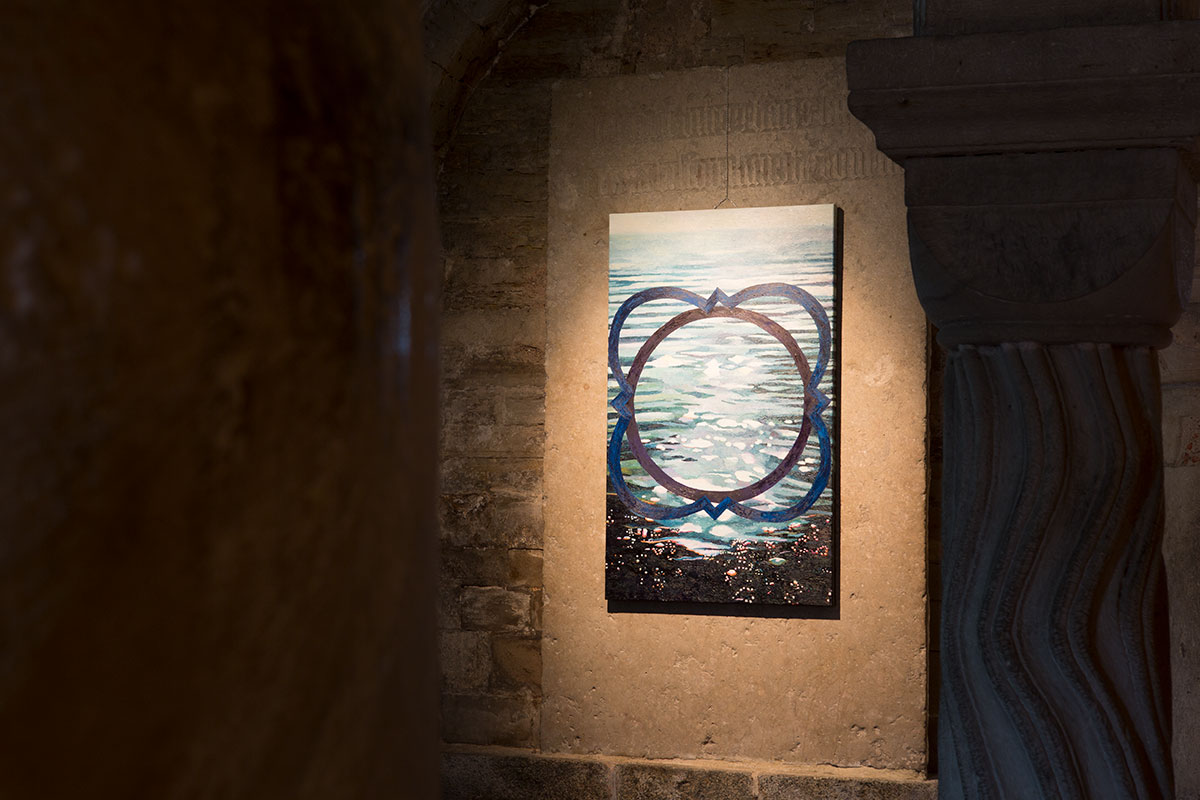 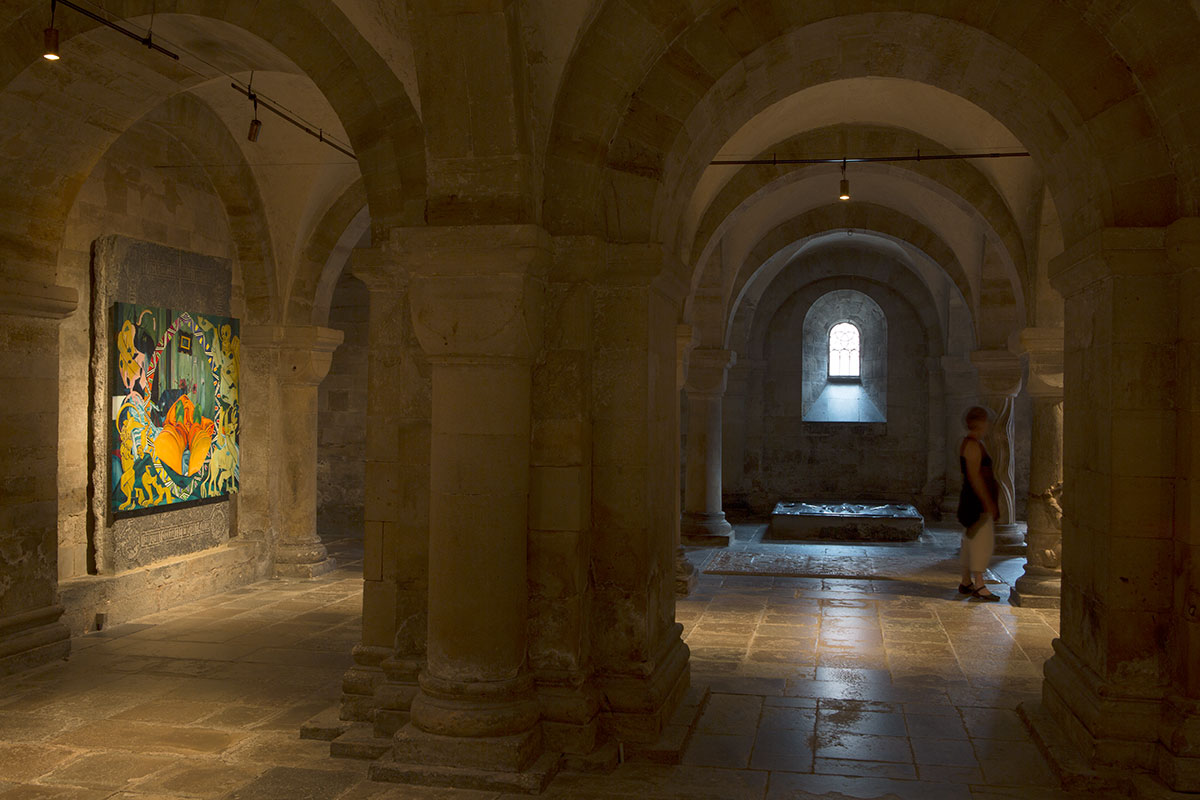 When comparing Haraldsdóttir’s paintings to the long tradition of artworks exploring the story of creation, one of their most striking aspects is precisely this sense of serenity. This is particularly apparent in Seventh Day, the most prominent painting in her sequence. With its dominant placement and larger size, it acts as a kind of “altarpiece” in the Cathedral crypt. But while God in the Íslenska teiknibókin or in the work of William Blake is shown blessing the world, and while Michelangelo’s six paintings on the ceiling of the Sistine Chapel never let the Creator rest, the motif of Haraldsdóttir’s centerpiece is based on a smartphone photograph of the artist’s legs, taken while she was lying in bed. It is framed by a pattern composed of what apears to be tubes of paint, and encompasses a wide spectrum of colours. While the rainbow symbolises the Second Creation, the sign of covenant between God and all life on earth (Genesis 9:17), it is the background that immediately catches the viewer’s attention: here we see the vernacular depiction of an untidy apartment, with a paintbrush stuck in a vase and a lopsided frame on the wall.

Theological discussions generally contrast the notion of creatio ex nihilo with creatio ex materia (creation out of matter) and creatio ex deo (creation out of the being of God). With the final painting in her series, Haraldsdóttir proposes to combine the three. Kazimir Malevich claimed that laziness has been branded the mother of all vices when, in fact, it should be regarded as “the mother of life”. Mladen Stilinović ends his seminal text The Praise of Laziness (1993) with the words: “There is no art without laziness.” Similarly, Haraldsdóttir seems to suggest that the Seventh Day is not a well-deserved rest after a job well done. It is ultimate creativity. A stretched-out now.