In a seminar at the Academy of Fine Arts in Reykjavik, Hulda Rós Guðnadóttir explains in her terms that art creates questions for the audience, it does not provide answers for them. This is how most of Hulda Rós Guðnadóttir’s work meanders. A visual artist, with experience in film making and a cultural anthropology, Hulda Rós has been working with connecting her past memories and present experiences, exploring the social evolution of “Icelandicness”. Two exceptional artworks that Hulda Rós has made are The Cornershop or Kjötborg (2008), a film in collaboration with Helga Rakel Rafnsdóttir – that has been multi-awarded in Iceland and abroad – and her later work Keep Frozen (2016), which had an equally resounding mass appeal in festivals and was widely nominated on an international scale.

The Cornershop or Kjötborg is a film that every local enjoys: it shows life in Reykjavik as we remember it before the mass technological blast of production, before internet and the general globalisation of consumerism. Daily life, when people would still walk in a snowstorm in Vesturbær, in Reykjavik, to buy milk and two tomatoes, not three because the money was perhaps not enough. A time when the bill was not a printed digital number, but a hand-written paper of the local seller. When there was a strong feeling of neighbourhood and when the local stores or in Icelandic Sjoppan were meeting points. However, Hulda Rós’ approach is not judgemental.
Her work feels like an unexpected hug from an old school friend. It is something that we appreciate in its wholeness. Kjötborg doesn’t criticise the biggest stores or capitalism in a profound way. It does remind us though, all the small good things that we experience when interacting with smaller shops, a sincere góðan daginn instead of the fast automatic „beep“ in a supermarket that costs 346 ISK less, for instance. Kjötborg reminds us that a human being is a social being. That allows us to open a space in our head to think of how we can keep all the good in this developing society. Hulda’s work reports to the audience how things were in the past and how they are now, as entities that both exist in our memories. She explores these changes and the way we experience them, capturing and reanimating our memories, as in a parallel universe of what is today and what has remained from yesterday. 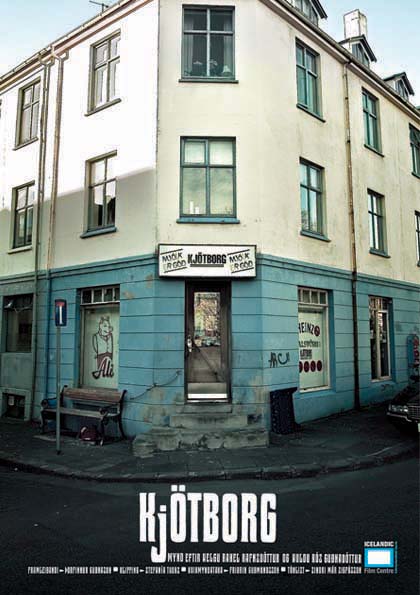 In Keep Frozen (2016), Hulda Rós examines the contemporary dock workers by the port in Reykjavik. Docks are an architectural spot and emblem of Iceland, which is a fishing country. Everyone in Iceland at some point knew someone or had a family member working within the fishing industry. Or even further, they walked by the port to look at the sea and play. Many, there, found out how seagulls sound.
Today, though the scenery has been altered due to the development of tourism in the country, the docks have become a touristic destination where often new big hotels are built and dock workers have become latent in their own working space. Furthermore, one can say that docks have become a sort of safari location and the workers the object of observation, of what is need to be deposited in mind as Icelandic.
In Keep Frozen one can understand what is art as research and helps us come to the realisation that things are to be observed and researched. As a dock worker existed in our memory -perhaps of a grandpa we didn’t meet or the contemporary evolution of the viking that lives within the Icelandic vision- so they do exist today, in the same location with a changed socioeconomic perspective of the scene. They exist and still have a difficult job to execute, but are also performers for the eyes that look at them and coexist with them today. 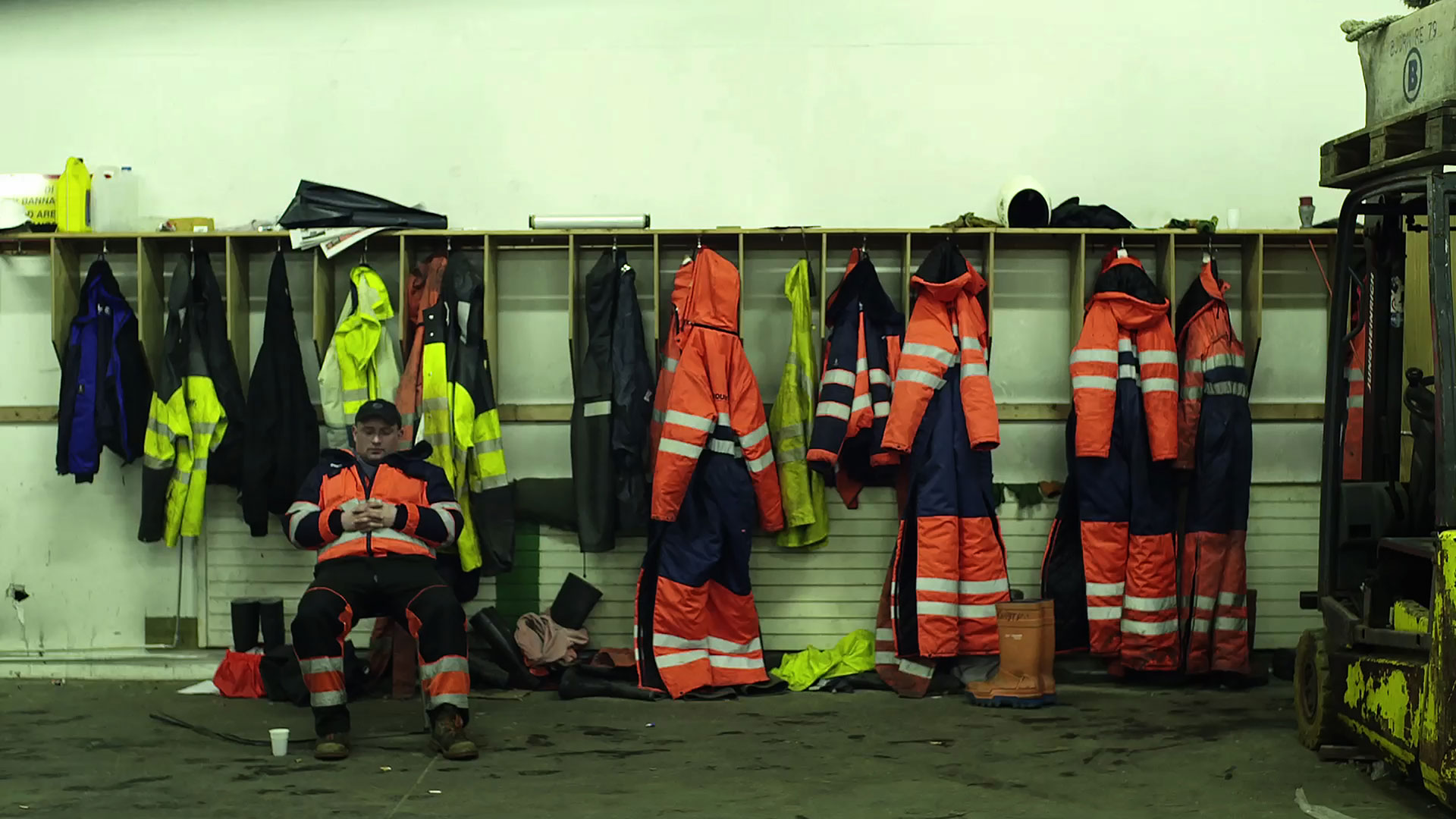 Still from Keep Frozen (2016). The documentary Keep Frozen was very successful. It was nominated to dozen of international prizes during its film festival circulation that included A-level film festivals. Afterwards it was distributed in art house cinemas in Germany and in 2018 received an honor of becoming the content of Guðnadóttir´s first solo exhibition in a museum in Germany when it was shown as part of the 12 x 12 immersive screening program at Berlinische Galerie in Berlin.
See: http://www.huldarosgudnadottir.is/keepfrozendocumentary 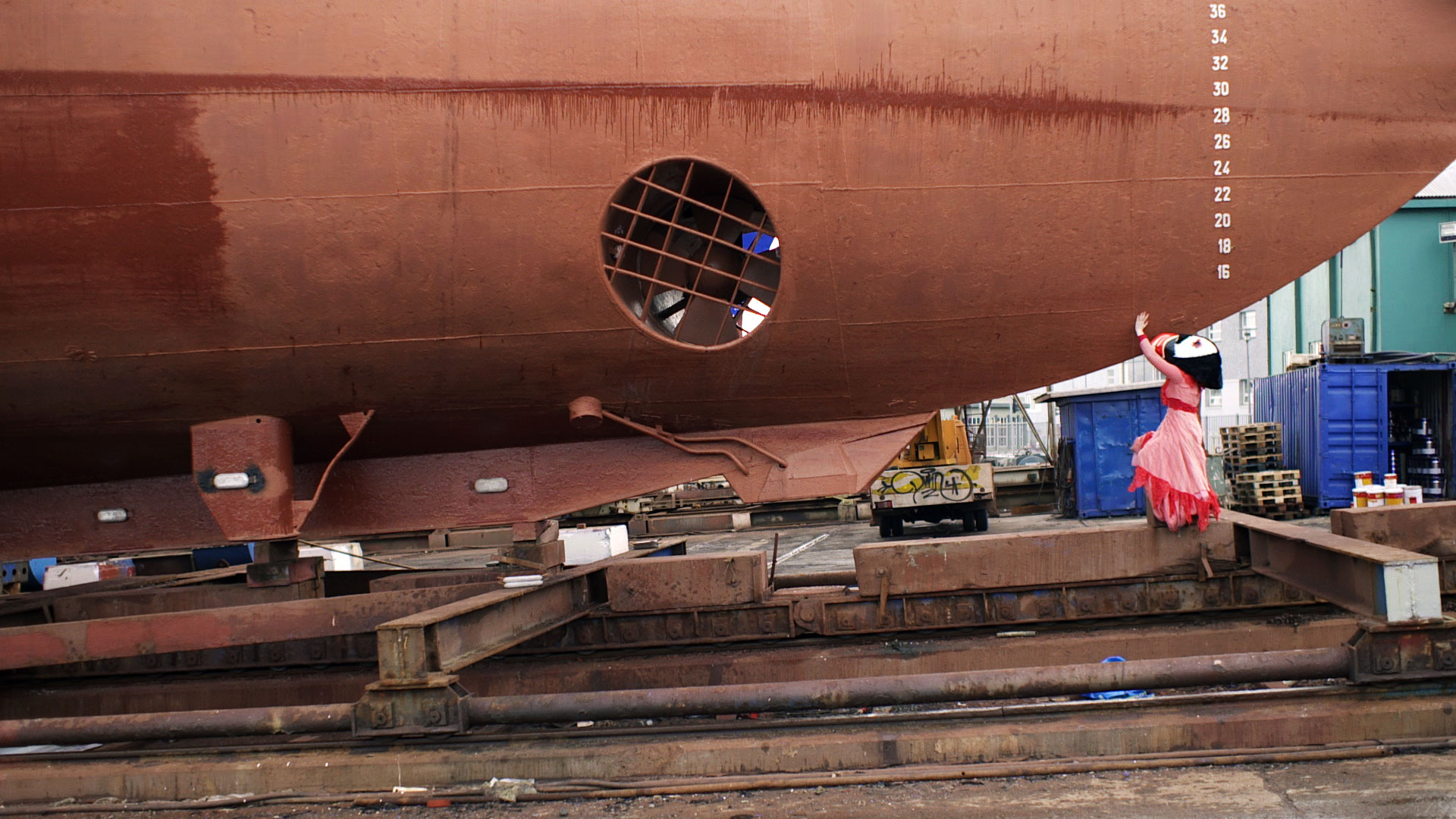 Hulda Rós does not only deserve the Guðmunda S. Kristinsdóttir Award as a female artist. She deserves it for her ability to grasp the anthropological evolution of this “Icelandicness” within a specific location of immense architectural and cultural exporting spot of Iceland. Hulda’s work takes us on a trip in Reykjavik, of what it was before and where we have come to be today, within the frame of social reforms and changes of the city through the years. Her work constitutes a thoughtful documentation of the Icelandic society’s evolution, the economy of Reykjavik and the still existing occupations such as the dock workers, which might serve as witness for the future generations. For the time being, húrra Hulda Rós for your work you gave us!

Keep Frozen was completed with a very well designed book which can be found at: http://www.huldarosgudnadottir.is/keep-frozen-book

Those who would like to explore to extend Hulda’s researching work and up and coming projects please visit: http://www.6x6project.com/ and http://www.multis.is/