I spoke with the artists of Berg Contemporary’s recently opened exhibition, Event Horizon. Marie Søndergaard Lolk, Sigrid Sandström & Hulda Stefánsdóttir told me about their practice in non-representational painting, the particularities of working jointly yet separately, and their inspirational references in creation.

Can you describe for me the context behind your work in this exhibition at Berg Contemporary, ​Event Horizon​?

Hulda Stefánsdóttir: Soon after we started to discuss the possibility of a joint exhibition, we found a common denominator of our works and interests in the art historical notion of negative pictorial space in the context of contemporary painting practices. We were all interested in the processes of image making that deal with a transferal, an inverse of sorts, or a translation, a mirroring, and to a certain degree: a deliberate confusion – the negative that becomes the positive. During this time of correspondence an image of a black hole, constructed from a mega data and the result of decades long science research was published in the media. We were all captured by it. ​This black hole image is a translation of an ineffable phenomena, an image of a world beyond the image, the imagined, set forth as an assemblage of the furthest distance, boundaries referred to as an event horizon. You wonder which is the actual image, the bright orange-yellow halo of the black hole or the black middle dot in the image? In fact, the image is not an image as such and the black dot in the middle is not a black hole but rather the shadow of a black hole. This spoke directly to our approach to painting, provoking thoughts on the limits of visibility.

Are there any recurring themes that you find yourself coming back to in your practice, places you draw influence from?

HS: Representation of time and movement on the surface of a still canvas is an overreaching theme I have approached from various angles before. Paul Klee said that the point about painting was to spatialize perception and make time simultaneous. It has to do with the functions of memory and the impossibility of presenting any given moment without echoes or traces of the past. Deriving from this is my interest in repetitions and ideas of the original and the copy, the foreground and the background, silent and disturbed surfaces. I seek to repeat, dissolve and reduce imagery to ambiguity as to stress the instability of our perception. It also has to do with art history and the history of painting that is a constant source of influence on my practice. Not only the fairly recent history of modern abstract painting and the non-representational, but history of art and image making to the furthers extensions of the past: cave paintings and discoveries of the earliest mark makings and from there on to today. This incredible need we have for visual expression as a source of communication and confirmation of existence are an endless source of inspiration.

Marie Søndergaard Lolk: Lately I’ve worked with translations between different states of images, often using found images as a source. Sometimes I’m treating an image as information or as something textual, that can be broken down into components, and so can have ambiguous readings. Sometimes it’s the other way around, the textual breaking up into bits of matter. I’m also very interested in joining ideas of the personal and impersonal, e.g. through interpretations of found drawings or found handwriting. Another recurring aspect of my work is perhaps the inclusion of glitches and faults, which also relates to this idea of translations I mentioned, it always implies a level of distortion or misrepresentation. In that connection I find I’m often looking at the generalizations and categorizations that things fall into, both visually and language-wise when you’re working with images.

Sigrid Sandström: I have for the past few years been preoccupied with paintings as evidence of past activities and how they nevertheless operate in present tense as they “unfold” in front the viewer. Traces of the painting process become parts of the final image. I think of my paintings as projection surfaces upon which we project our own agendas, and the many possible ways of approaching/viewing a painting is of great interest to me. The reception of a painting will keep shifting over time, suddenly it belongs to history while never the less it still exists as an object in the present, and I keep thinking about how the viewing that takes part in the making of a painting is somewhat different from the kind of viewing that happens once the painting is completed, and free for grabs, if you so will. The fluidity of the thing is of great interest to me. 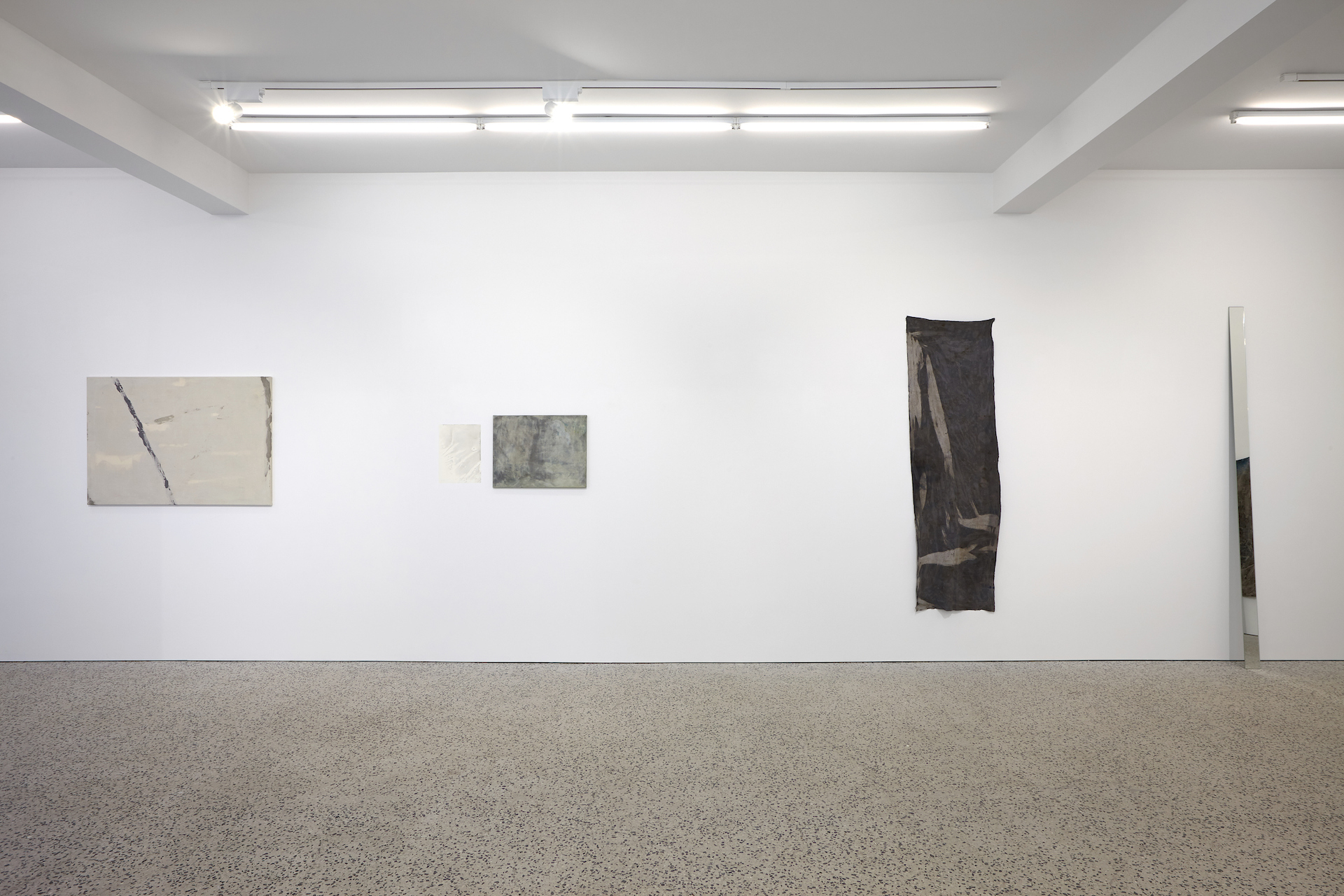 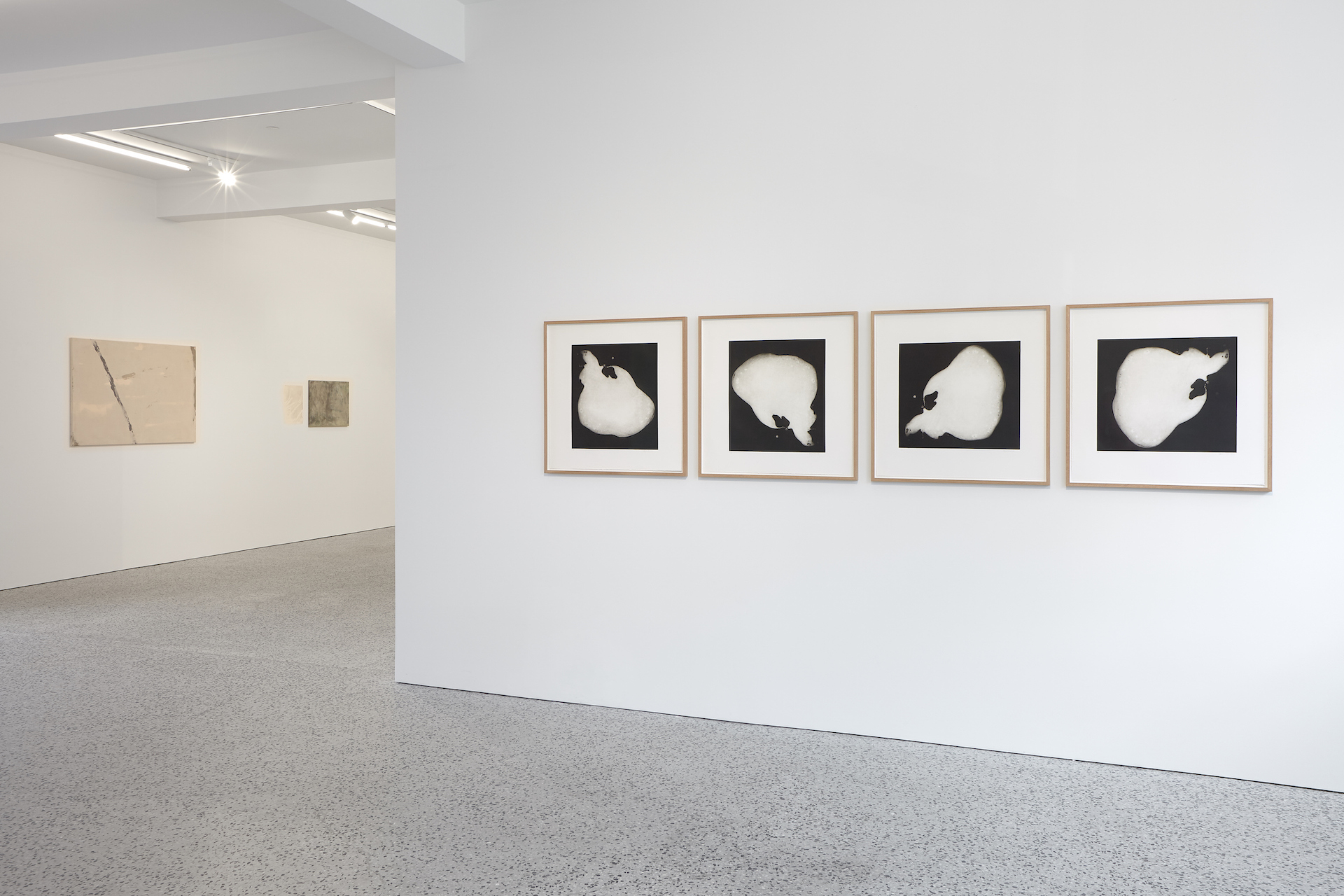 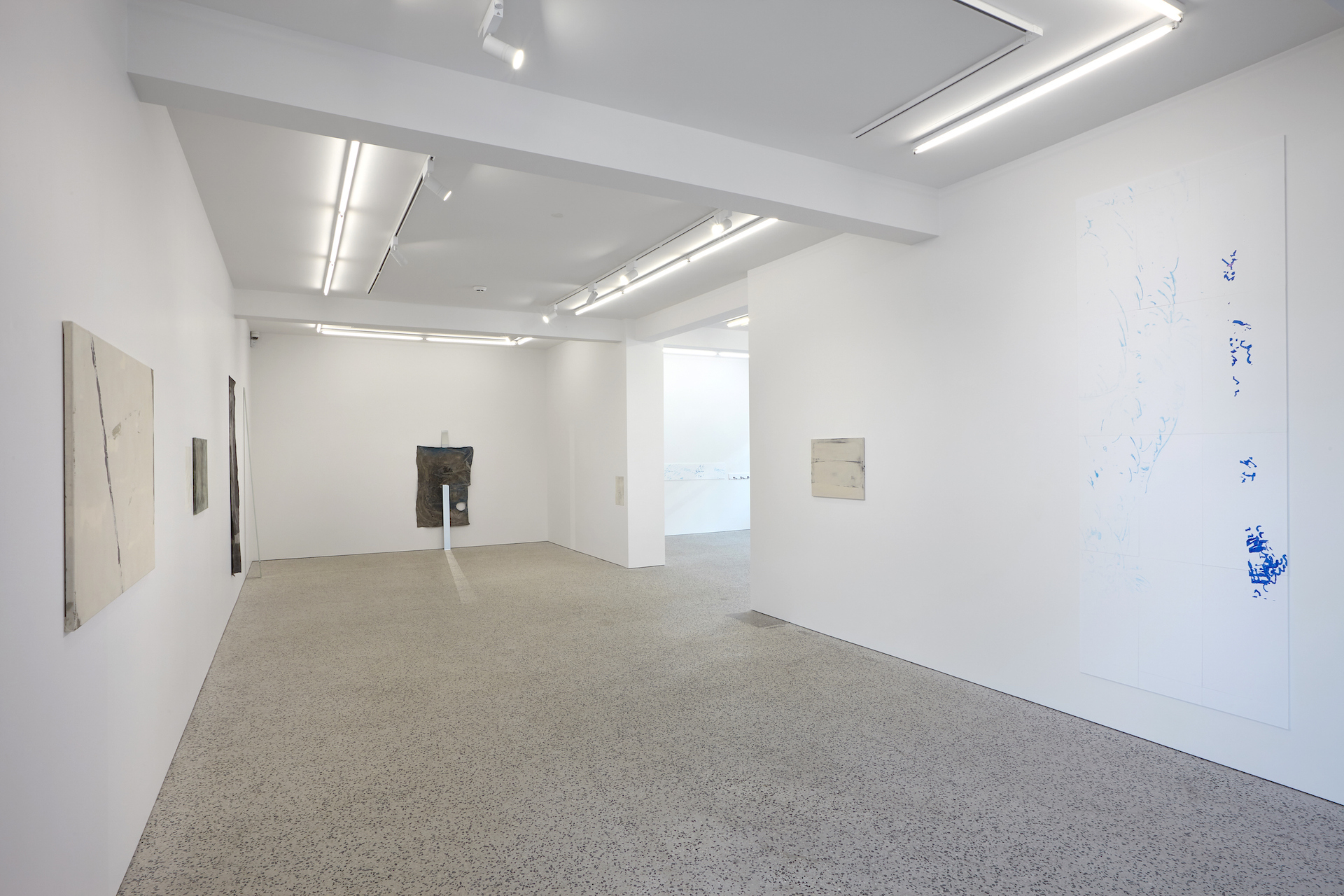 Describe for me your process of production, both mentally and in physical creation.

HS: I often start with a textual reference, but during the process I realize that it is no less a material, a tactile and visual one; various impressions accumulating in a particular visual idea. I never consider new work to begin at a point zero, the works build up and, in a way, I am constantly responding to the previous ones. It would be hard for me to distinct the thoughts of the mind and the physical actions of the creation, sometimes matter comes ahead of a concrete thought and sometimes it takes some time to put my thoughts into actions. It is all about the tacit knowledge of visual thinking and a continuous process.

ML: The works in this show I’ve approached as a kind of bands or sequences, similar to strings of writing or even comic strips. Different elements are repeated and, in that way, become as much structure as image. I wanted to work with the formats as well and make them more like lines or borders in the space, something that could work architecturally. They are made on foamboard with marker pen and watercolour and so share a visual affinity with drawing, although the process doesn’t have the same directness. The seemingly quick lines and gestures of the source image are stenciled and in other ways modulated, partly as a way of deliberately halting the fluidity if the image.

SS: In my case, everything that happens in the studio is interconnected to earlier works, either in direct response to it or as part of a more casual dialogue with previous works. For this exhibition I wanted to work with the positive as a negative and vice versa. For instance, at the moment I use cotton rugs dipped in paint to press to the surface of the canvas, just like printmaking, in order to make the imagery in my paintings. The image is thus the imprint of the absent object, or ghost image of the rug I used as tool. I am interested in the fact that the absence of something simultaneously becomes the image. For this exhibition I chose to, in addition to the “printed” paintings show the actual tools (cotton rugs) as works in and of themselves along with the paintings.

How do you define nonrepresentational painting and its boundaries, as in the absence of an image?

HS:​ I think that one of the things we have in common as artists is to question the definitions and boundaries between the nonrepresentational and the representational. So, our painting practices deal more with the tension, and instability between the two, rather than the compartmentalization​.
I question the image as such and at the same time I see my painting process as akin to printmaking or photographic dark room processes. What are we really seeing? To me it seems like a fragmented whole in a shifting and turning context. And the boundaries are constantly extended, the absence of an image broadening the pictorial surface and pushing the edge of visibility to the unforeseen.

How do you each as separate artists experience your three practices coming together in this exhibition?

HS: For me the dialogue and collaboration with Sigrid and Marie has been a challenging and enriching experience. Challenging in the positive way that it has provoked me to consider my work in a more direct broader context and enriching for the same reason, a sense for a wider perspective, shared commonalities and differences, yet a passion for the possibilities of the painting in contemporary art.

ML: I agree, it’s been a really good process and, to me, a stimulating encounter between our three quite different practices. I find the show to have some appealing dissonances as well as obvious common interest points. But it’s not so simple after all, I feel the show as a whole hasn’t quite settled in my mind yet.

SS: The show turned out surprisingly cohesive I find, because our approaches to art diverge from one another quite a bit. I very much enjoyed the collective effort of putting something together that was quite intangible at first. The days of installing the show were very focused as we were trying to get to know, understand and address our intentions and motivations. I thought we were very responsive to each other and our subtle, non-hierarchical collective way of decision making through trial and error was enriching for me.

Event Horizon​, how do you define this term in relation to your exhibition here at Berg?

HS: As previously described the event horizon presented this viewpoint of imaging the end of visibility that we have all dealt with in one way or another in our works. A certain dishevelment that plays with these borderlines. The work may indicate a landscape, an object or a structure, but the work process always entails a willful distortion of a known reality. You question what you see and present a different way of visual experiencing / reading. The literate connotation of the phenomena is an inspiration in and of itself; event as an action, horizon as an indication of a distance, or a landscape, imagined or real. The Icelandic word Sjónhvörf, literally translates to edge of vision, and has a connation to myndhvörf (metaphor) or hvörf, that marks a turning point, the end of something and beginning of another, perhaps not yet known.

Why abstraction? What are the possibilities for you as artists in this specific approach?

HS: I think the free open space of abstraction is such an interesting way to approach existence and this crisscrossing time space we live in. These marks and dissolving symbols of a language meaning cut up and re-assembled, fragmented impressions that come together yet also feel like they are about to dissolve or burst.

Photos courtesy of Berg Contemporary and the artists.