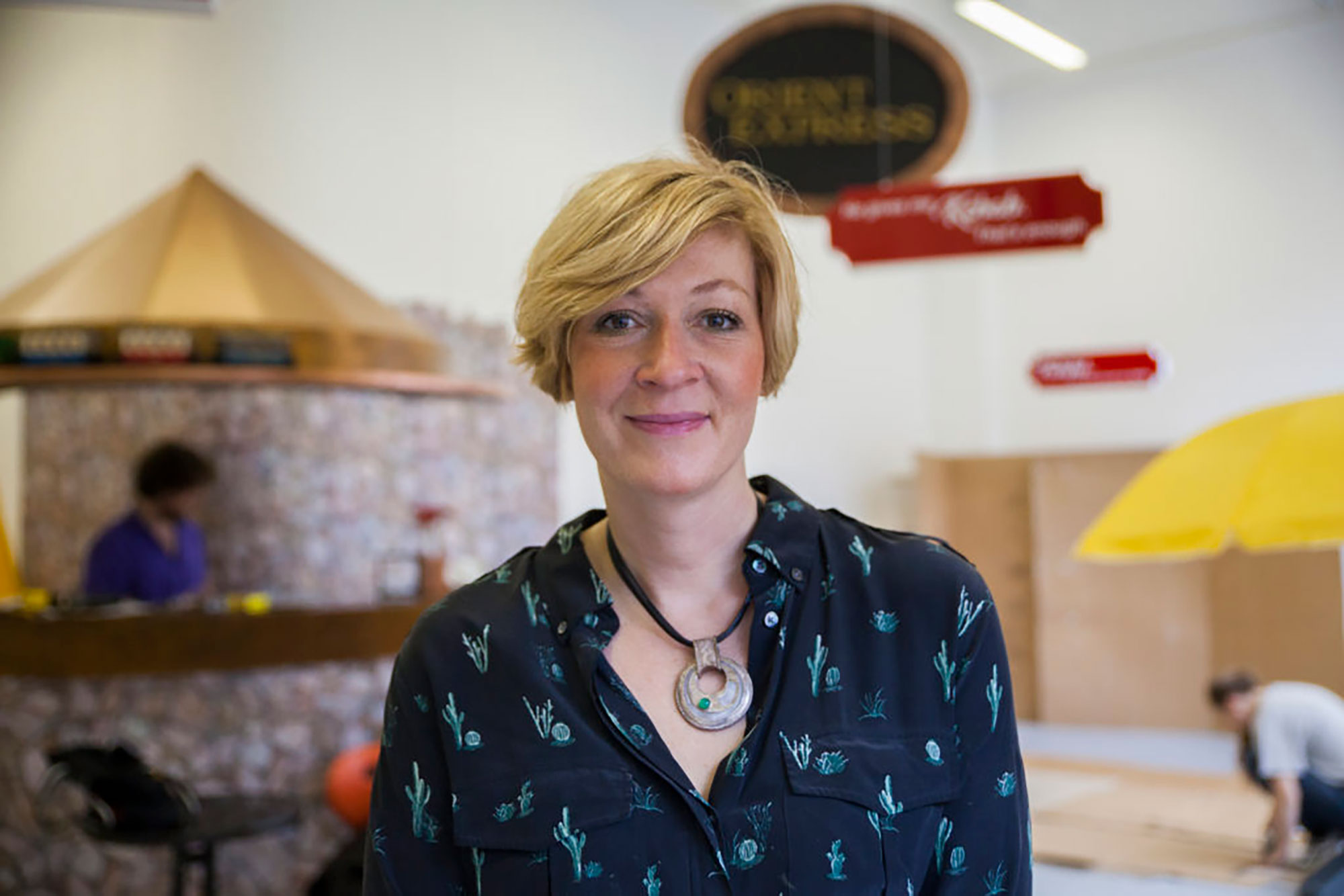 In the years 2013-2017 Grosses Treffen, a networking event for visual artists, took place once a year at the Nordic embassies in Berlin. It included a careful selection process where few artists from each Nordic country were handpicked to meet ‘the makers and shakers’ of the German art scene, the curators and the museum directors. The founder, curator and organiser of Grosses Treffen was Solvej Helweg Ovesen. She is currently associate curator of the new Riga International Biennial of Contemporary Art (RIBOCA) and also artistic director and curator of the communal Gallerie Wedding-Raum für Zeitgenssische Kunst in Berlin contracted by the City Of Berlin.

When we met she was in the midst of executing a large performance festival in Berlin titled ‘Songs of a melding iceberg – displaced without moving’ as part of Nordwind 2017. This version of the festival brings together artists from Africa and the Nordic and Arctic countries around the theme of understanding de-colonisation in combination with ecological changes. Grosses Treffen is currently at a crossroads and therefore it was ideal to meet Solvej and ask her a few questions about her experiences and motivations.

Solvej, you are an curator from Denmark, based in Berlin. You have in recent years focused very much on the African art scene but also the Nordic and Arctic art scene and curated projects that bring those two scenes together. Why?

The connection to Africa came about in a private way because my sister lives in Nairobi and through her introduction to the African continent I started to get to know a lot of very interesting African people and probably noticed the ones in my own environment in Berlin much more. In 2014 Bonaventure Ndikung and I started to collaborate and we have done many shows together since. Through the African artists I work with I came to understand both myself differently and also the issue of de-colonisation that is also very relevant in the north, in for example Greenland, at the moment. I´m actually looking at Scandinavia and the Arctic through Africa somehow and that gave me another entrance to art scenes that I thought I already knew. One of the core interests and themes in my curatorial practice is how ecological changes that we are experiencing also change our culture. There is a lot of geopolitical interest in Greenland and lot of opportunities at the same time as some very strong images come from there that tell us about the landscape and our future, let´s say, in a dimension that we cannot handle as humans. It is a very interesting place the Arctic – what the melding of the ice really mean for the people there and here? It might also change our relations a lot. It already does. And it is interesting to see how humans react to the changing weather. In the Arctic people also react with nomadism, following the resources. The Nation-States try to keep the people in place. Therefore the second part of the title of the Nordwind programme, “Displaced without Moving”. If you have huge changes and can´t move to follow the resources then the historical way of solving of the problem is suddenly not at hand.. and you are displaced without moving.

The people I encounter from Iceland are quite aware of the former Danish occupation. It is the same if I go to Estonia. Of course it is more happening there in connection to the Russian situation. But Denmark has occupied Iceland and Greenland. I grew up not feeling at all like my nation had done anything wrong. I was told by my mum that “Denmark was the best and safest place you could possibly live”. Then at some point late I could see the ‘bodies’ that Denmark had left behind historically in England, Iceland, Greenland and Estonia for example –Danish imperialism has had quite some violent consequences that was brought to my consciousness though the awareness of post-colonialism in general. I think the concept of the de-colonial it is relevant in relation to how Icelanders have been occupied by Denmark. From a small nation position it is always important. Obviously Iceland is dealing with it’s past as well as other nations. But from my perspective it doesn´t seem to be such a big wound anymore, just the human understanding of the effects of colonialism as such is there. I´m interested in the work of Icelandic dramaturg Arnbjörg María Danielsen who I work with in connection to Nordwind at the moment. 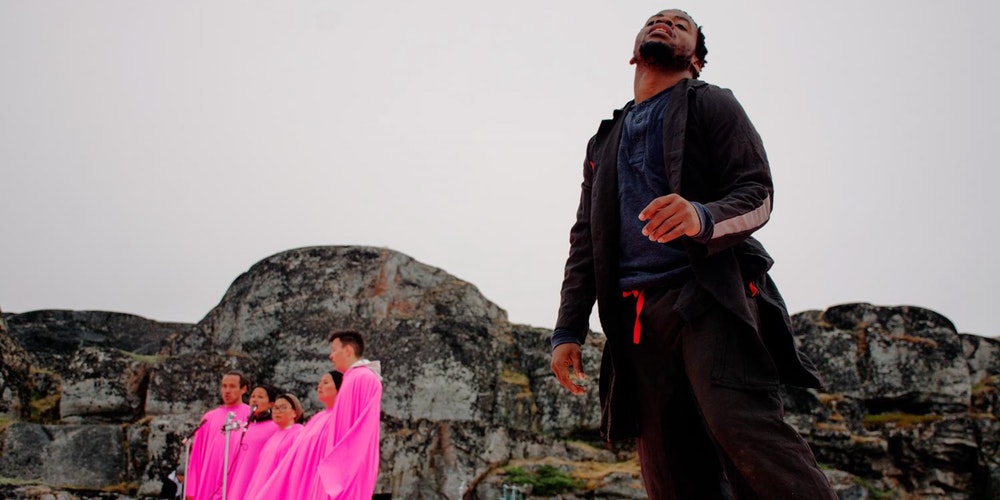 Her current work has to do with de-colonisation of Greenland and at Nordwind she collaborates with world famous dancer Qudus Onikeku from Lagos, Nigeria. She has previously invited him to Disko arts festival in Greenland. The festival was founded by her in the Disko Bay area in Greenland and is based on de-colonial values and is for Greenlandic artists to develop a position independently in and out of Greenland – without Danes involved! Arnbjörg takes a very strong position in her work and with this festival. Danes have been very busy speaking about our colonization of Greenland and now it is time for Greenlanders to talk amongst themselves and with artists from other places where de-colonisation is important part of artistic practice since decades such is the case in Lagos and with the work of Onikeku.

Now when Grosses Treffen is at cross-roads could you tell us what you consider the most valuable outcomes of the project so far?

The network between artists from the North. Berlin has been a hub where up and coming and established artists, from also distant places, have been united. Berlin is and has been a place for these people to meet each other. When Grosses Treffen opened its doors in the morning at Felleshus, The Nordic Embassies in Berlin, it was almost like an army of young people coming in. An amazing sight. 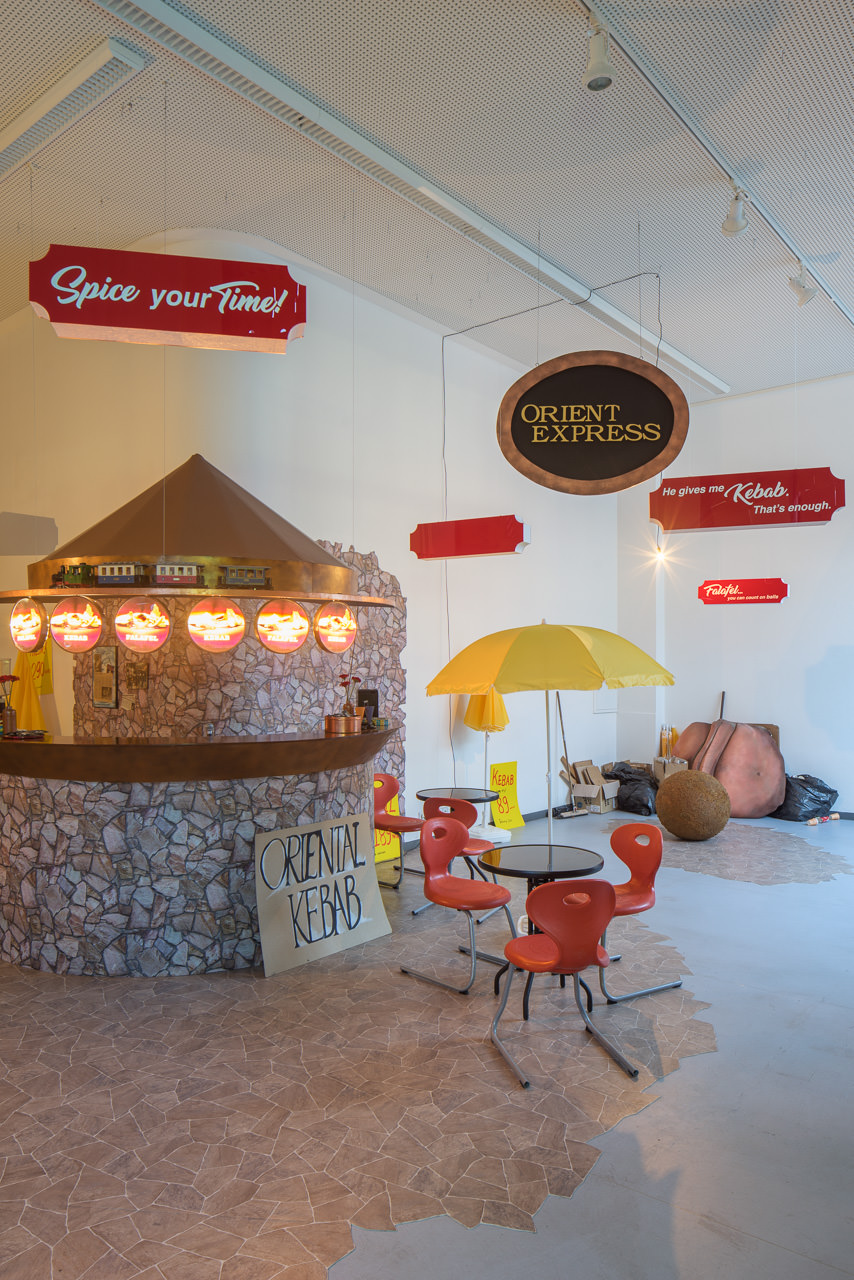 It is a great gift that these people, artists, now know each other, that the Nordic Embassies and I know them. These are people who are creating important statements in the here and now and they have been brought together. And as always the traces will become even more visible way further in the future. So there is still much to happen. Also for myself I will probably be working with these people for the rest of my life? I’m already working with them – for example Dafna Maimon that is now opening here at Galery Wedding with the solo show “Orient Express” as part of Nordwind. 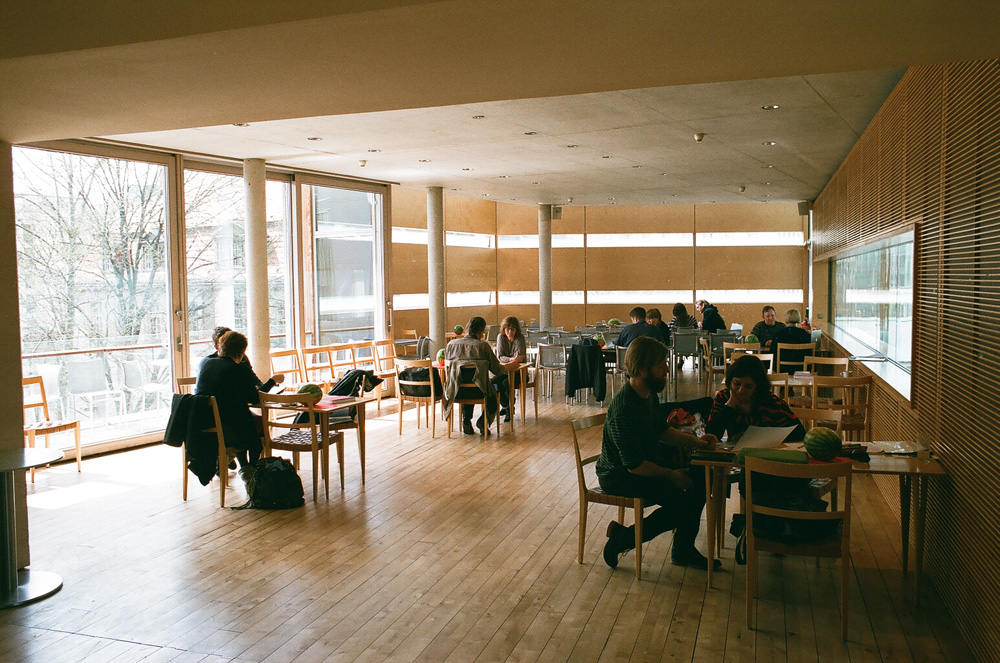 From Grosses Treffen in Felleshus at The Nordic Embassies in Berlin.

Her work takes a point of departure in reenactment of her fathers kebab restaurant in Helsinki as a space to discuss transcultural family relations. I met her through Grosses Treffen and there is now an online archive of 800 artists more for curators all over the world to work with.

First of all you cannot categorize, but speak about generic tendencies. If you go to Denmark you see a lot of formally and technically interested artists. If you go to Estonia you might see more political aesthetic practises. When you go to Latvia you may see more existentially interested aesthetic expressions. In Iceland it is often very poetic and fictive artwork. Strong imagination. What the Icelandic art scene like any other smaller art scene could consider is to generate more diverse positions – both aesthetically and content wise. I think it is important that the artists are more diverse in their expression; with their subject matter; with their knowledge; and with their ambition. You have Olafur Eliasson and that is a certain model where there is only one from every continent that is on that level. I strongly appreciate the work of Egill Sæbjörnsson. It is a very generous and invigorating position and has historical roots in Iceland, but he also generates new sustainable communities abroad. He is working with an imaginary universe that is very very entertaining and funny and obscure and thus approachable from many sides. So I would say more of those different, consequent and outstanding positions.

Is there anything that you would want to add?

First of all I think it is important for all artists from wherever they come from not to represent their country unless they want to. Maybe it is also important to add that the country itself can do a lot to avoid the brain drain, the fact that the best brains – no matter where in the world they come from – leave the country, by welcoming bigger art-productions and supporting them directly. That is how the artists of the scene can develop diverse positions and audiences become resensibilized to aspects of life that are not prioritized in a certain political culture at a certain moment.