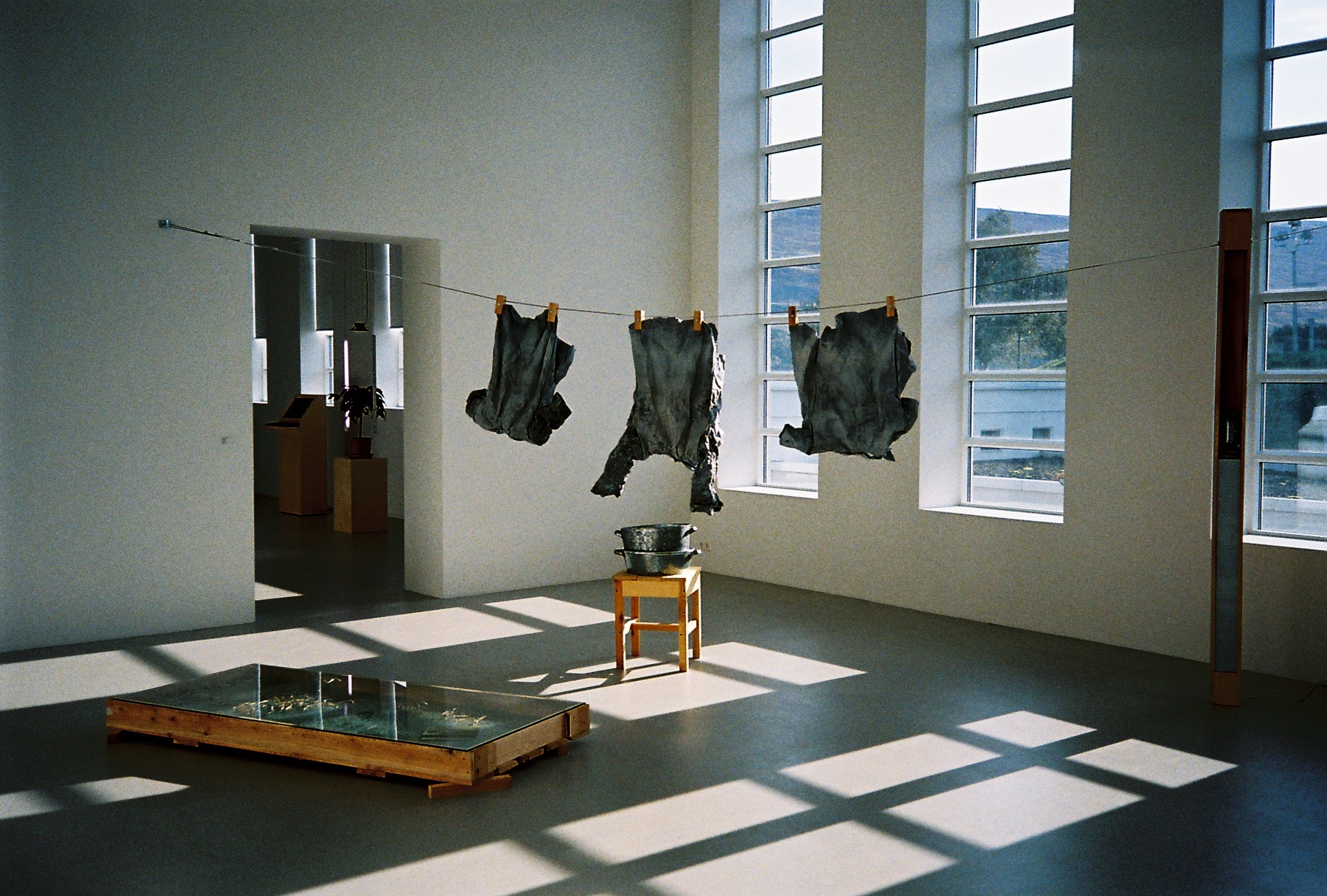 Attacked by a cold morning breeze and a church bell sound of the North, I enter the Akureyri Art Museum as one of the first guests. The stairs of freshly renovated art space leads to Talaðu við mig! / Runā ar mani! / Talk to Me! titled show, a wide exhibition of 19 contemporary Latvian artists not only opening the conversations about identity and art in context of Iceland, but also emphasizing the sad reality of Latvian Museum of Contemporary Art.

The effort of reaching the 4th floor is rewarded with so well filled space that it feels like it had been designed for these art pieces. The light from the windows seems like an extra element, adding movement trough time and space. Even the overlapping sound at the beginning of the show from two video works – humorous screaming kohlrabi’s that is just about to fall in a boiling water in Kriss Salmanis’ Why I’m Not a Vegetarian and ritualized appearance in the nature in Katrina Neiburga’s Pickled Long Cucumbers – coexist so smoothly it making another piece, an experimental audio. 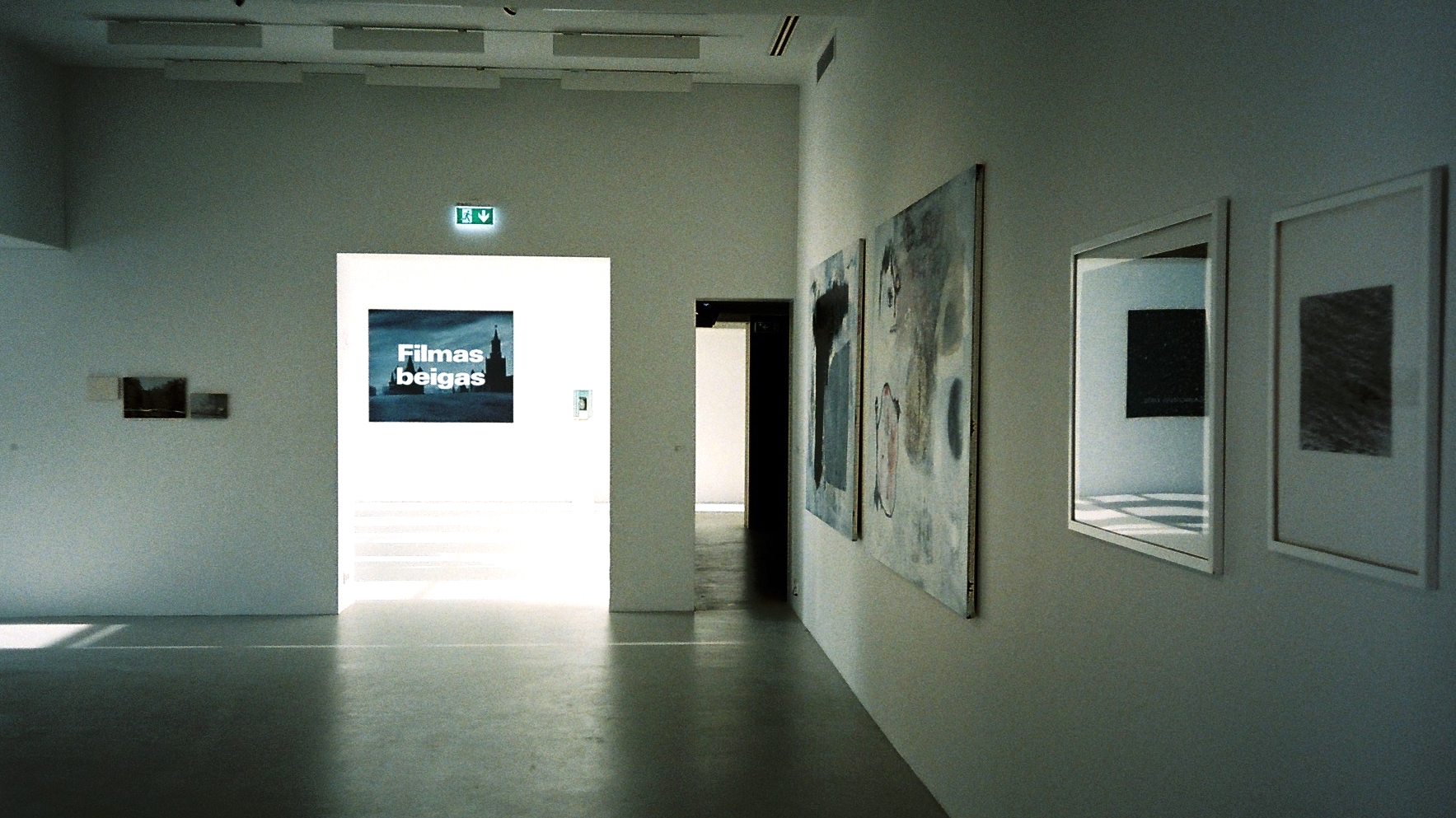 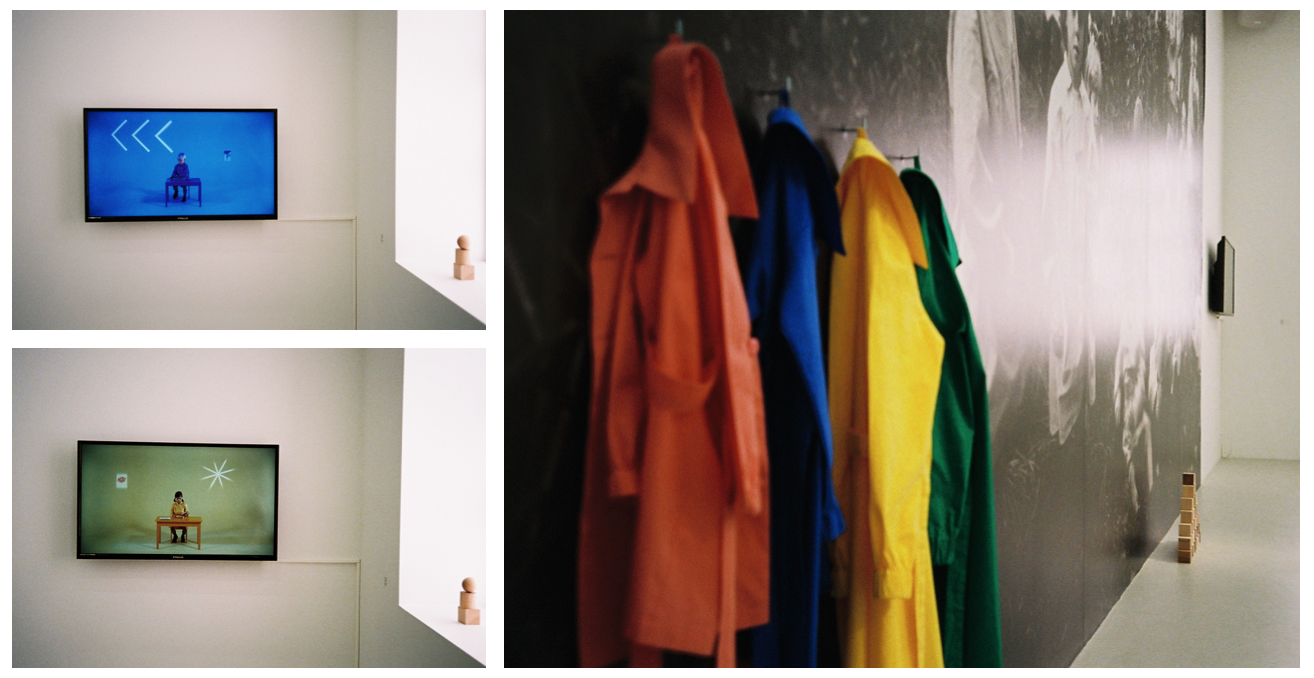 Then comes the text. It’s focused on the historical thread between the two nations – Iceland being the first country in the world recognizing Latvia’s independence in August 1991. Understanding the show being part of the 100-year anniversary celebration of autonomy of Latvia and therefore gaining the financial ground to allow this exhibit to happen is important, but the way it’s mentioned shadows the artwork ability to breath by themselves.

Although Talk to Me! content does cover history, for example in Leonards Leganovskis’ entitled “End of the Movie” and “This is the Red Flag” grey paintings that symbolically waves to the end of Soviet Era, as Latvian art historian and politician Helena Demacova puts in her essay in the catalogue of the show “Soviet era is only one of the factors informing our identity.” All of Talk to Me! art pieces are created by well established artists, strongly carrying different messages by themselves. For instance, Latvian-American visual artist Vija Celmins with two of her sophisticated drawings Star Field and Untitled (Ocean), allowing such a simplistic (on its surface) areas as stars in the sky or endless ocean water to become alive.

The show talks about the identity and nature in relation to people, as in Kristaps Gelzis’ Washing Day. Installation of washed cloth hanging on the rope, paused in certain time with naked male photograph laying on the ground right next to it, tells the story of a young Latvian poet Klāvs Elsbergs that mysteriously fell through the window in 1987. In Ieva Epnere’s Green School multi-media piece based on groundbreaking teacher Marta Rinka who used unconventional education methods connected to nature to teach children in the past century. Both of the art pieces are presenting inspiring personalities. Unfortunately, the only way of receiving this information is through a very well-made catalogue consisting of useful essays while there is no information provided next to the pieces themselves. 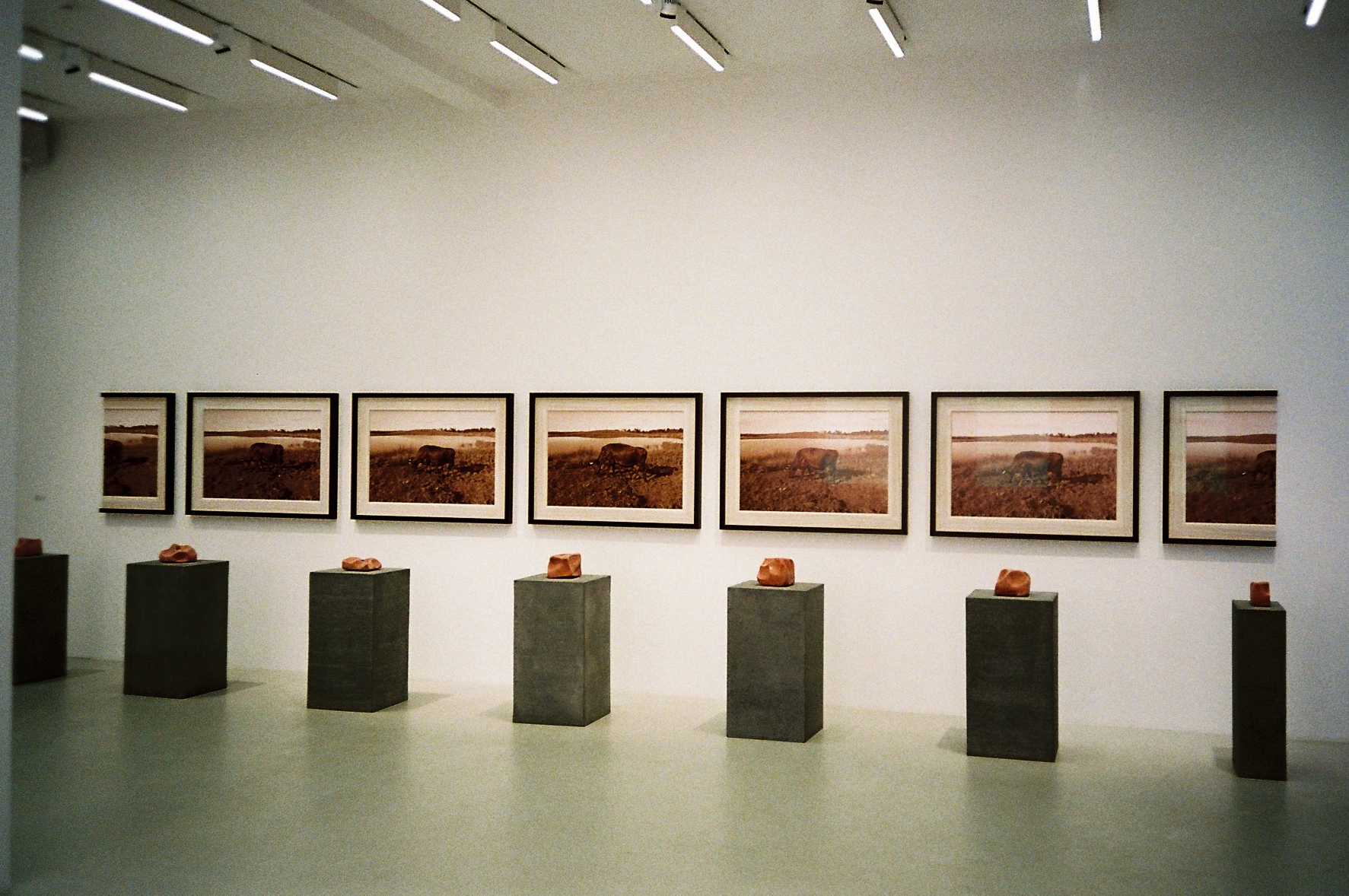 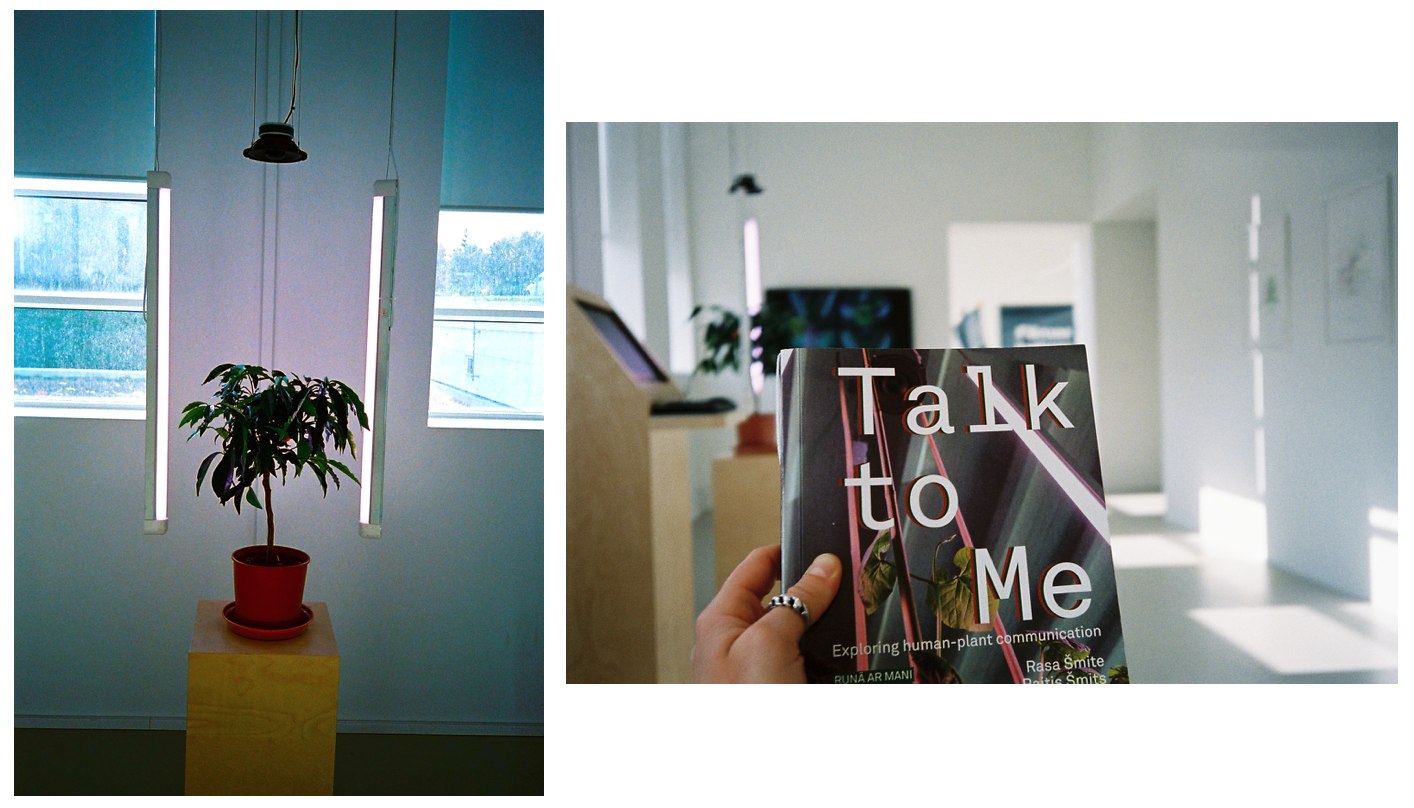 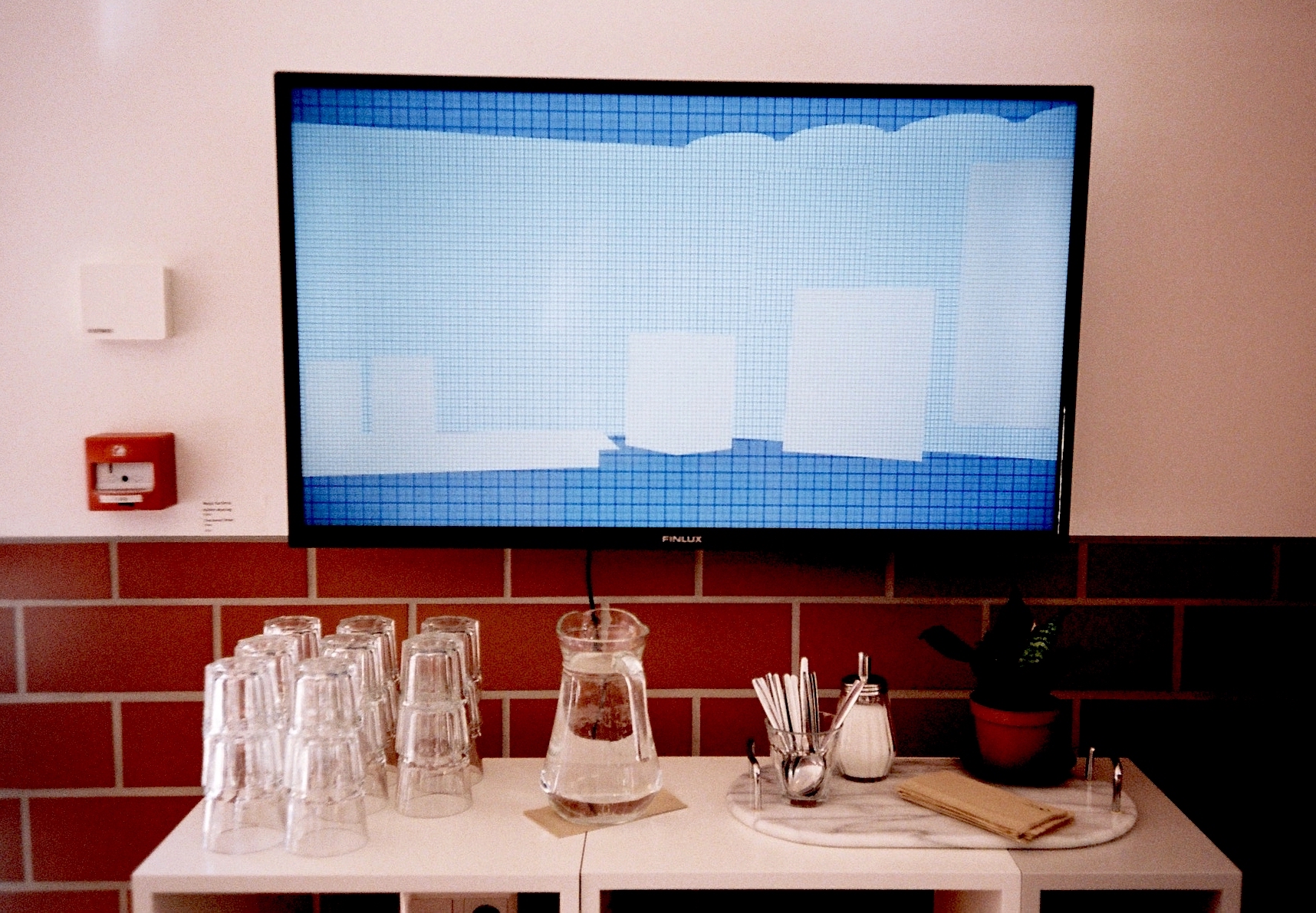 When a century ago CIA agent Cleveland Backster was recognizing plants having a “primary perception”, he was rejected by science. In 2019 Rasa Smite, Raitis Smits, Martins Ratnieks offer the piece carrying the title of the show Talk to Me! where science holds hands with art and question of whether or not (and possibly how) human-plant communication effects the growth of it. Based on a wider project by RIXC (The Center for New Media Culture), one mandarin plant is exposed to the direct interaction with the visitor. You type a message and computerized voice says it out loud to the plant. When asked my partner on what message should the plant receive from both us, he replied: “may we join you?”

Once back on the ground floor, a moment of thirst allows to notice a screen with a video running above the water source. It’s Maija Kursevas video animation Checkered Order which like an outsider is placed between ticket sales, café and reading area.

While current reality around the project of Latvian Museum of Contemporary Art has failed because of the main investors (private bank ABLV) announcing bankruptcy and therefore putting the grand project on pause, Iceland becomes the only place where an excerpt of contemporary Latvian art can be seen.