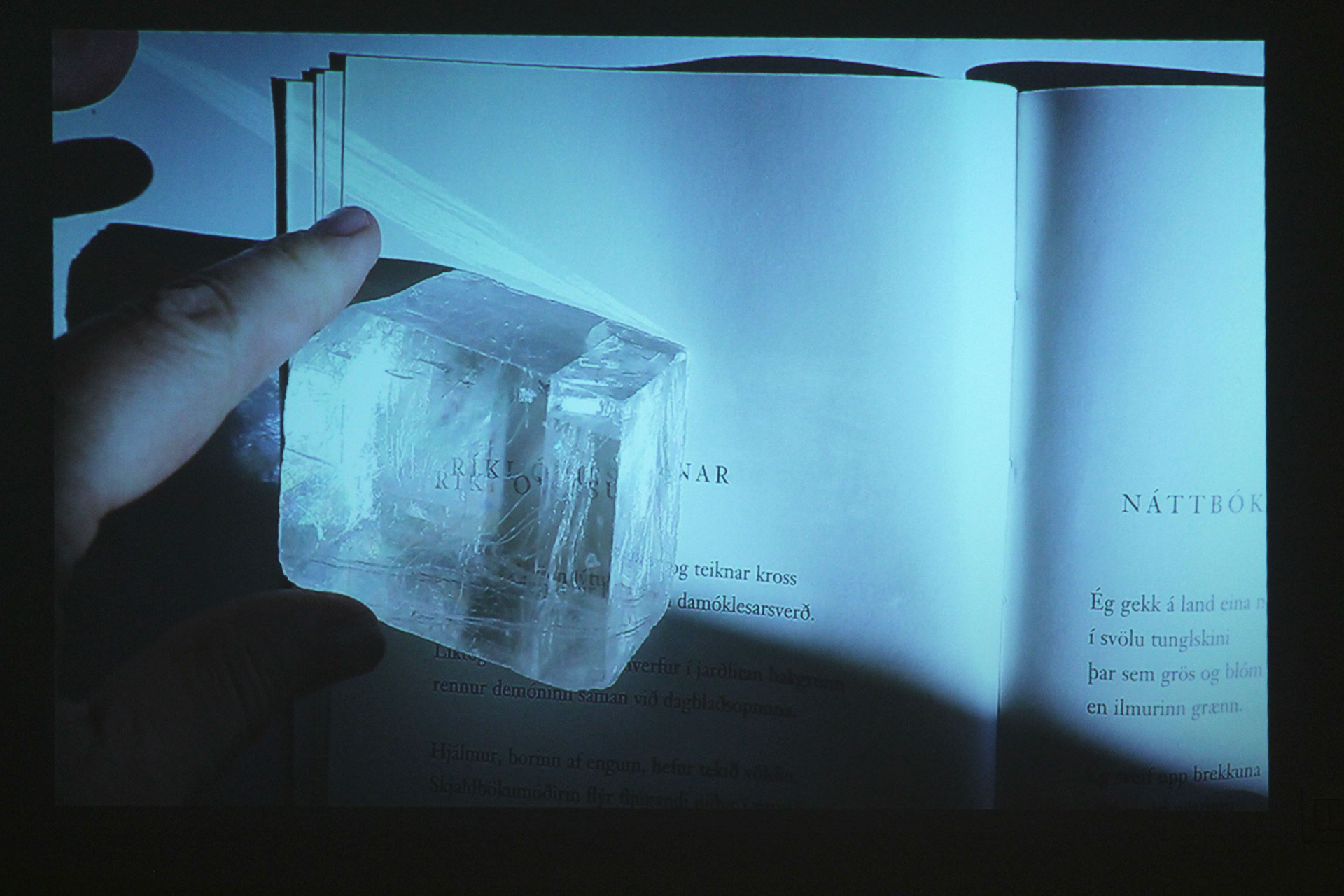 Human beings have always had a peculiar love-hate relationship with the weather. Our existence on earth is possible thanks to the atmosphere, the set of layers of gases surrounding our planet, and the first of these layers, the troposphere, the one closest to earth, is associated with the weather, since here is where most of the clouds we see in the sky are. When human beings weren’t in possession of any tool to protect themselves from the weather conditions, they used to just adapt to the external climate, but through the centuries we developed specific techniques: we discovered the fire which kept us warm, we sewed clothes, we built houses, we invented umbrellas, and time after time our relationship with the weather changed, storms ceased to be feared, uncontrollable and destructive forces of nature, because we learnt how to deal with them. We became more and more independent from the weather, and we are now able to carry on with our lives despite the meteorological conditions. But we went too far, we lost all respect for the weather and for nature, our anthropocentrism took over and we forgot how we used to live in connection with nature.

We only just recently started to think about the way our presence in the world influences the weather: we are around 7.5 billions individuals and we can’t pretend anymore we are not a factor in the environmental changes happening on planet earth. We need to acknowledge that such a large population has a huge impact on nature, the earth itself is begging us to review our behaviour toward nature: destructive natural phenomenons are becoming more and more frequent, signs of warning are everywhere.

The philosopher Timothy Morton claims that the humankind urges to rethink its approach to non-human entities, such as animals, plants, and nature in general. He states we need to reconsider the effects produced by our intrusive existence on earth, we need to find a new balance to re-establish a healthy relationship with the planet and the its other inhabitants, and in order to achieve this, we need to get over our anthropocentric view.

The show Come Rain or Shine moves toward this direction: the artists collective IYFAC (International Young Female Artist Club) aims to awake the viewers’ conscience by showing them how deeply we are connected to the weather. The works by Ragnheiður Maísól Sturludóttir and Ragnheiður Harpa Leifsdóttir reference to a time in which the meteorological conditions used to have an active role in our daily life, when we used to interpret the future by looking at the sky, to use stones to navigate the sea, a time in which we used to respect nature and to live in symbiosis with it. 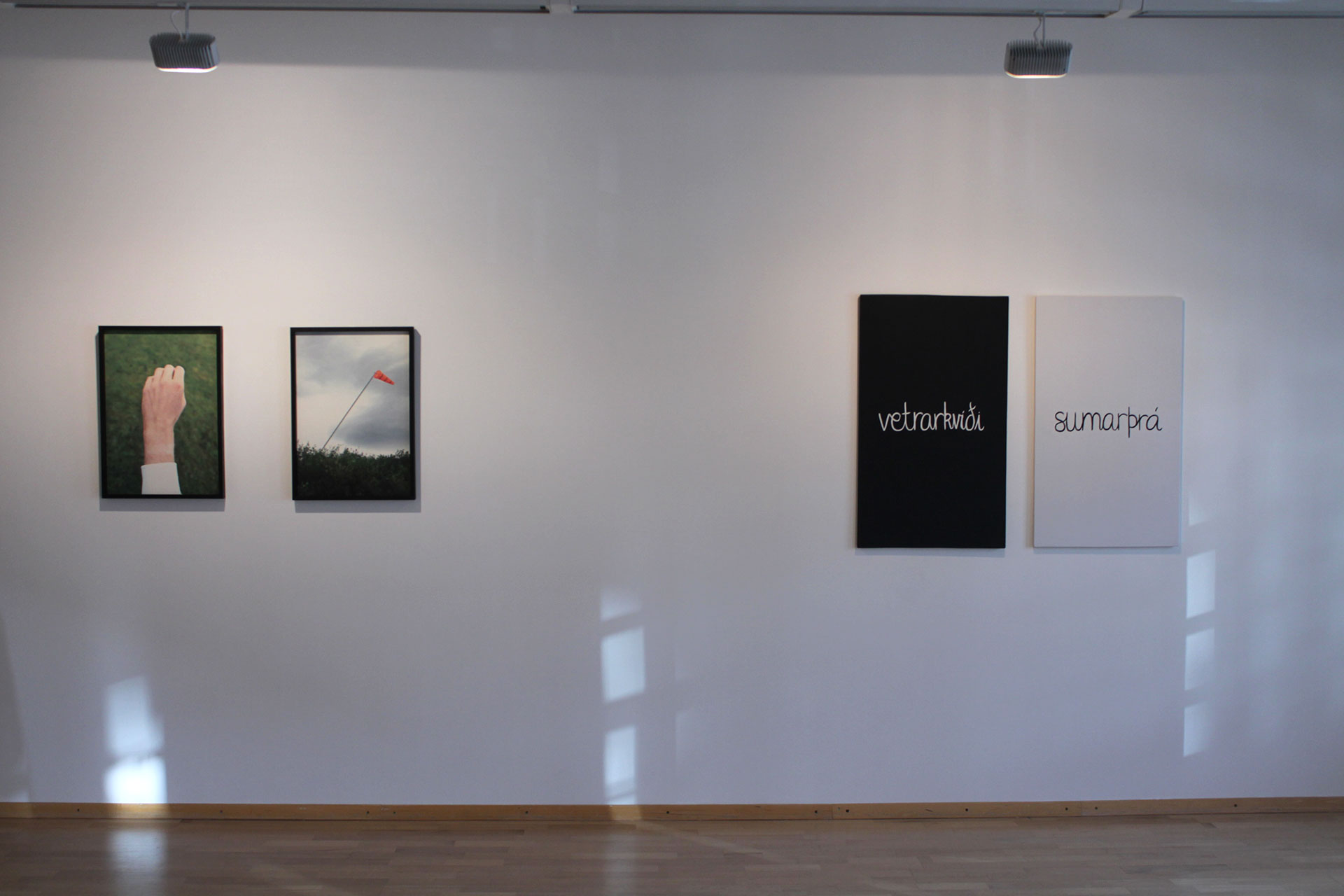 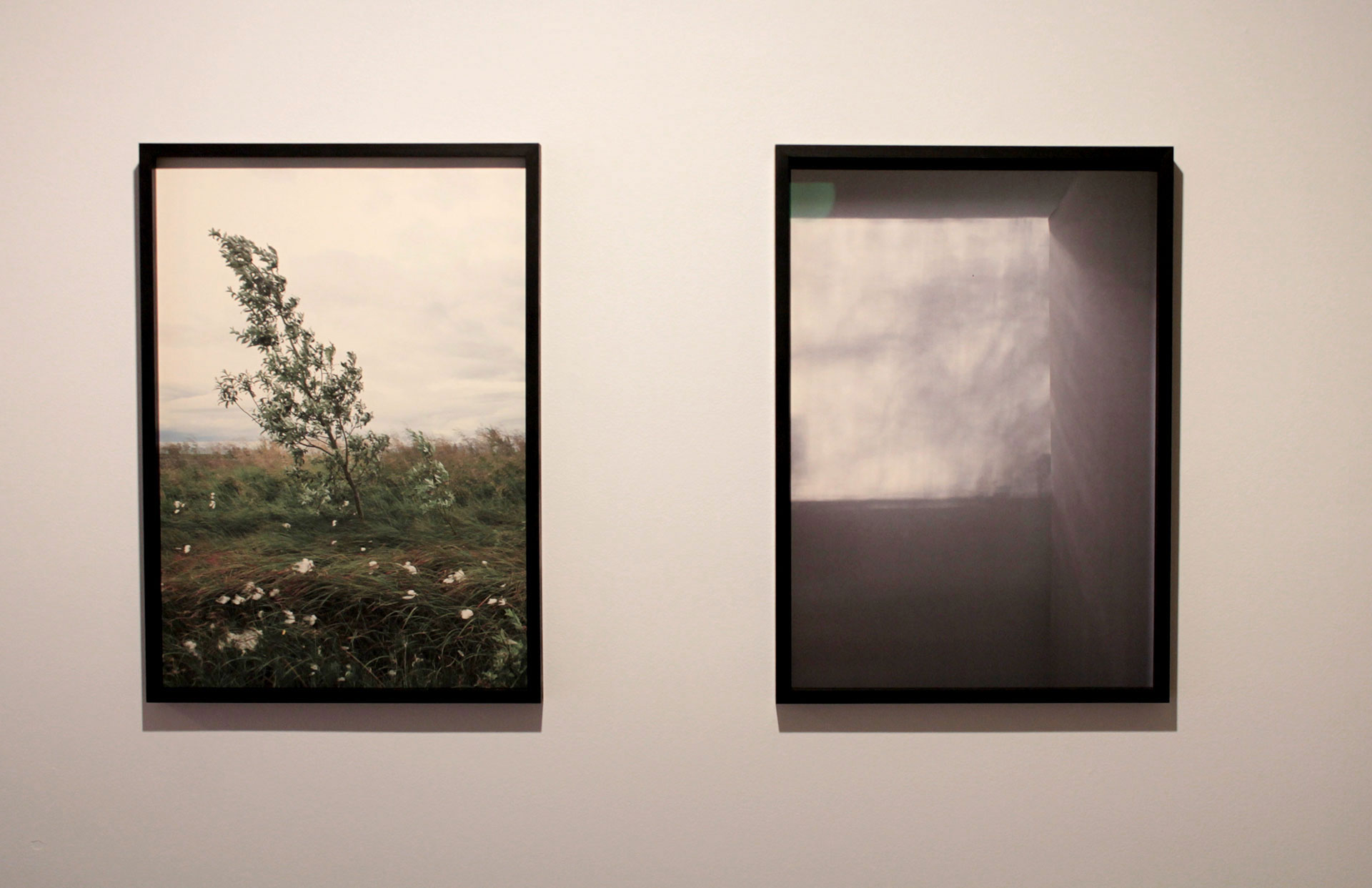 Sturludóttir created the series Placing a Ranke in a Field with Its Teeth Toward the Sky which is a sort of calendar reporting traditional knowledge connected to specific days and to the weather. For instance, the 9th of March is the Knight day, and “The weather on this day predicts the weather for the next 7 weeks”. This work reflects about the way the inhabitants of a place find a logic in the way the weather changes, and, time after time, deduce general rules from what they see. This folkloristic knowledge affirms our deep connection with the atmospheric changes: we wouldn’t have bothered to try to understand the way weather works if it hadn’t been important for us. Alongside this calendar the artist presents pictures which catch the consequences of the weather on persons and object: the sunshine softly getting across the curtain and projecting a light into the room, a mounting pole of a windsock bent from the wind, a wrist with a mark from a watch, elements which are witnesses to certain meteorological conditions.

Ragnheiður Harpa Leifsdóttir hung a long yellow drape from the ceiling of Hafnaborg all the way the floor downstairs, creating a “golden waterfall” which embodies a ray of sunshine. The light and soft material and its warm colour reflect our perception of the sunlight: a peaceful, joyful and embracing immaterial entity which gently warms up our bodies and our states. This site specific installation has been thought in relations to a particular architectural element present in the space: a little circular window on the top of a wall functions as a natural clock: by looking at the way the sunlight come through it we can deduct the height of the sun, and so the time.
Leifsdóttir contributes to the show with another beautiful and poetic work: the installation Polarity is constituted by two videos of close ups of hands turning the pages of the book The Sorrow Gondola by Tomas Tranströmer and placing on them an Icelandic spar, a transparent local stone through which everything looks double. This stone has been used by the vikings to navigate the seas, the properties of the stone allowed them to individuate the position of the sun despite it was hidden behind layers of clouds. 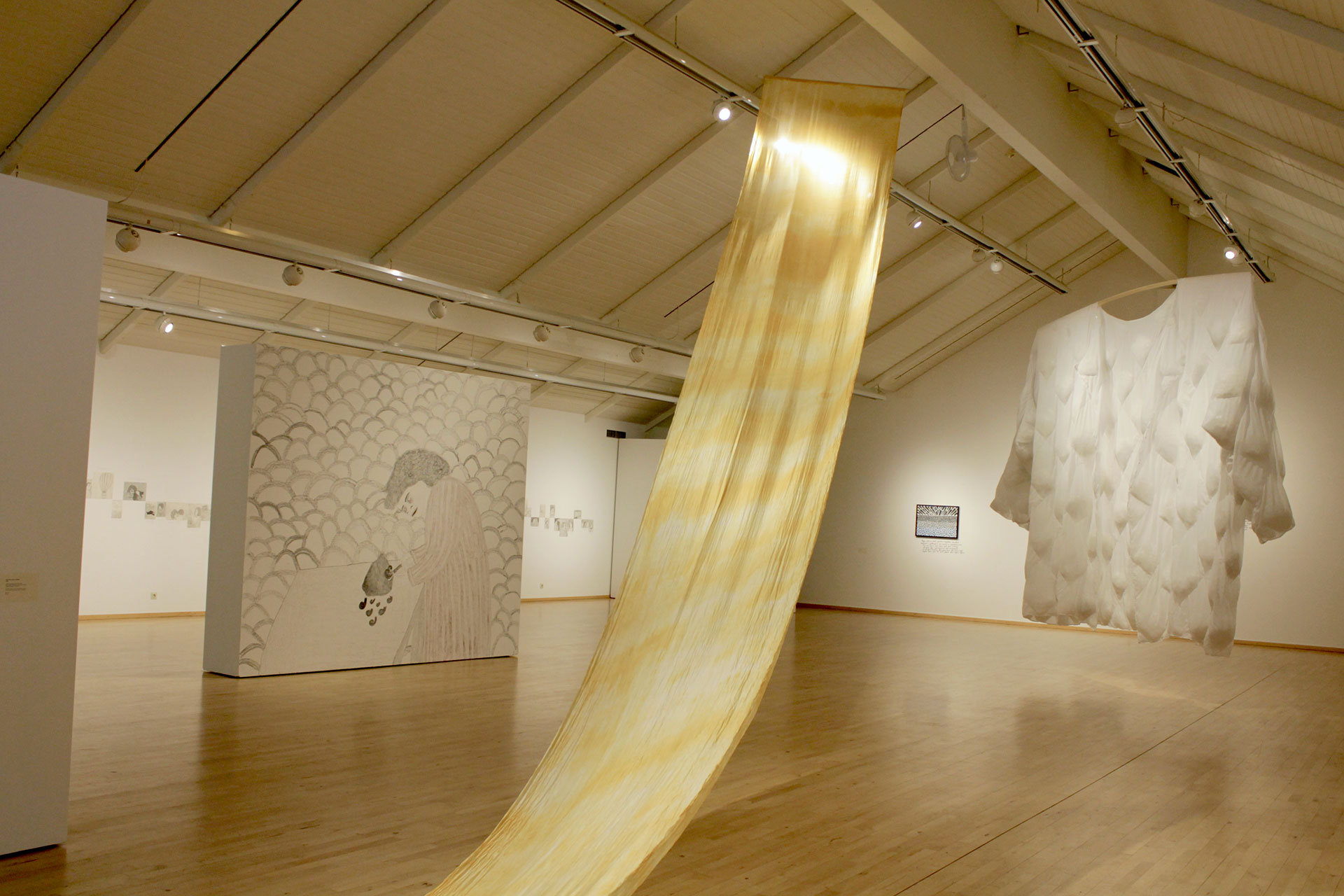 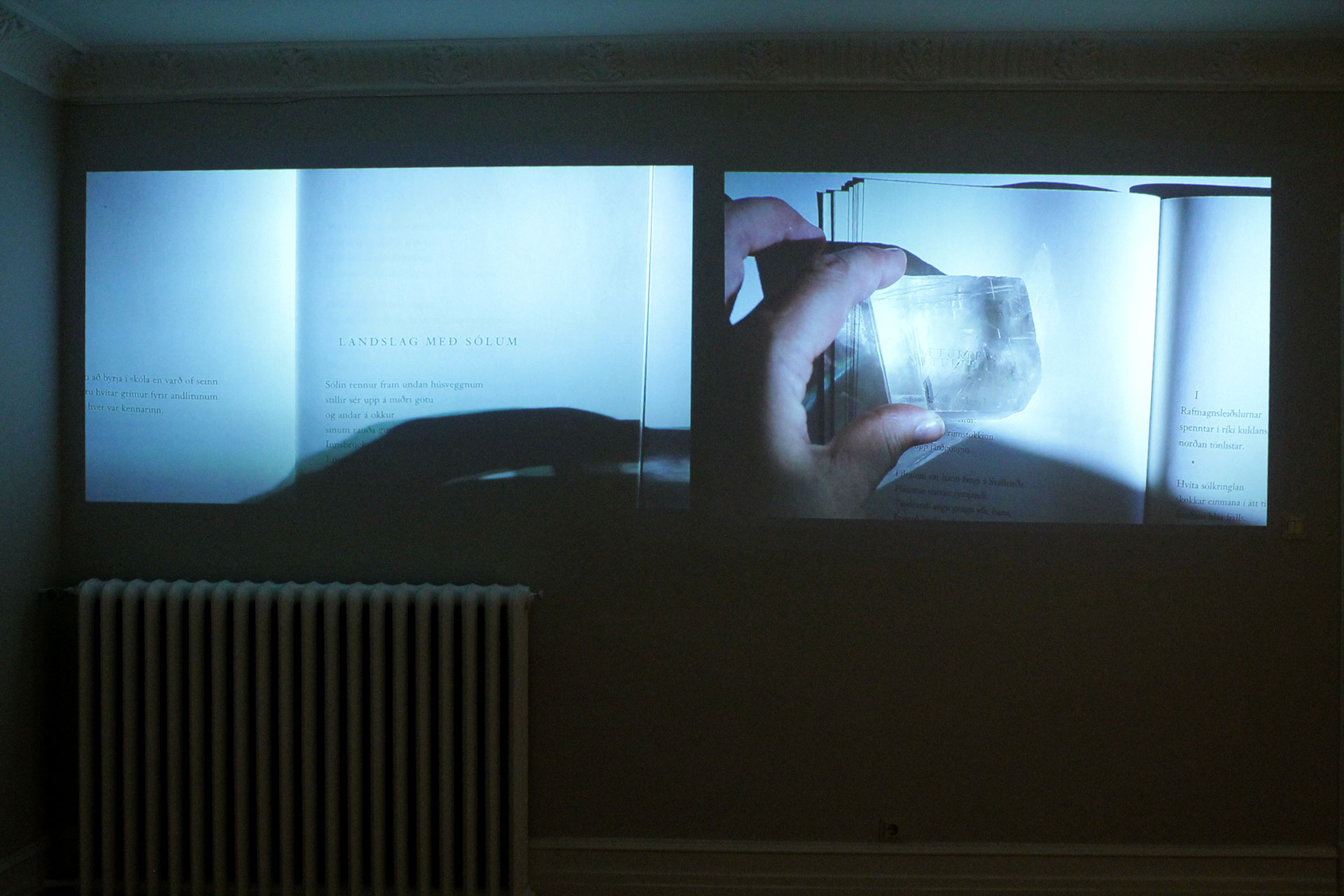 The artists Steinunn Lilja Emilsdóttir and Halla Birgisdóttir decided to work on the individual’s inner and intimate connection with the weather, a precious and unique relationship each of us develops with our surroundings.

Steinunn Lilja Emilsdóttir’s work It’s escalating deals with extreme natural phenomena, she transformed pictures of natural disasters such as desertification, the melting of icebergs, forest fires, tornadoes, and realaborated them into abstract and geometrical collages, associating each of them to a personal thoughts about the dramatic event portrayed. Her work aims to have an aesthetic impact on the viewer: within the frames the images are deconstructed in a style which resembles the Neoplasticism Art of Piet Mondrian, breaking the connection with reality and focusing on a subjective representation, a personal understanding of these tragedies. The sentences the artist wrote underneath each piece emphasise the belonging of the images to the her personal sphere, letting us get a glimpse inside her thoughts and inviting us to reflect on how those dramatic events are understood by us. 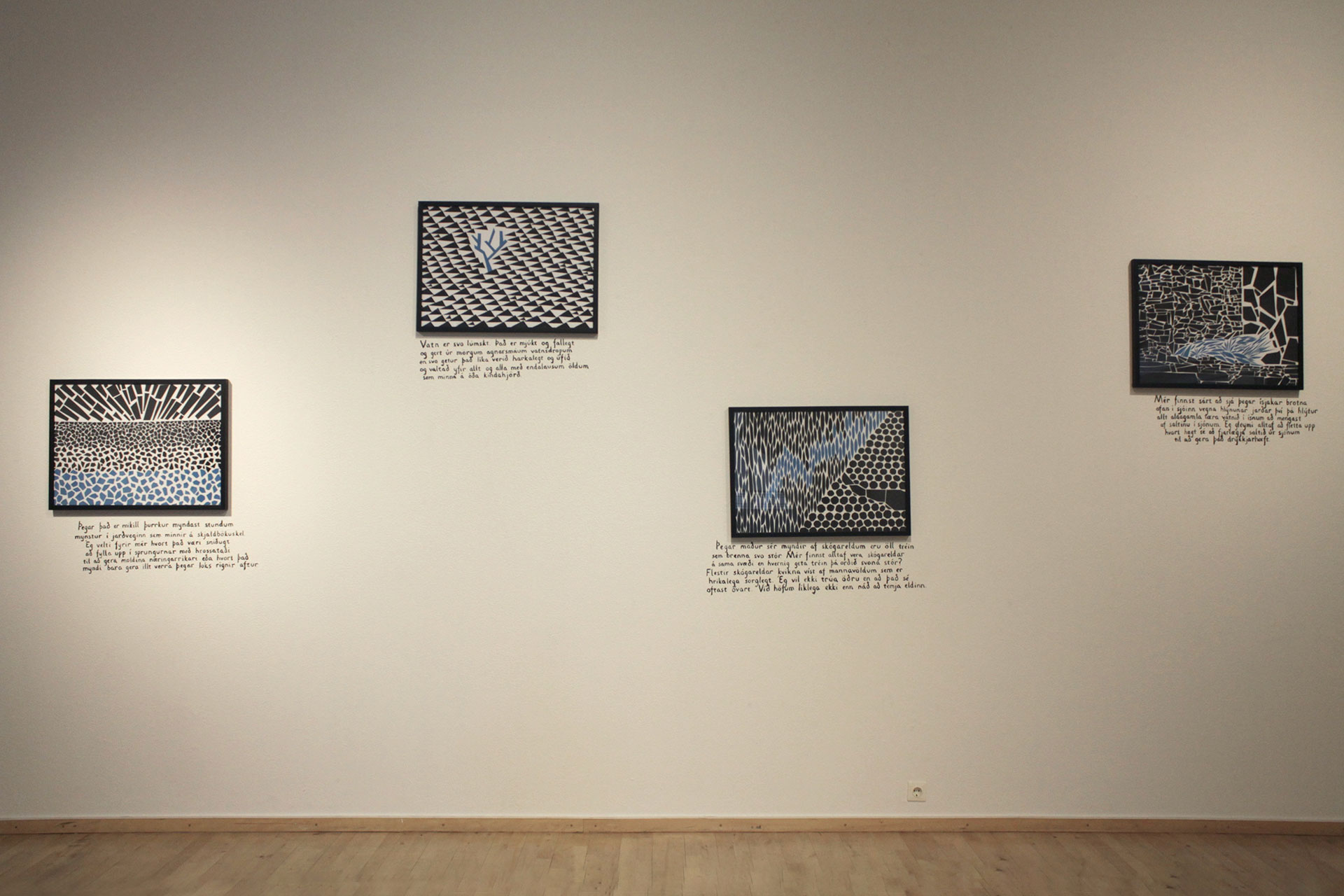 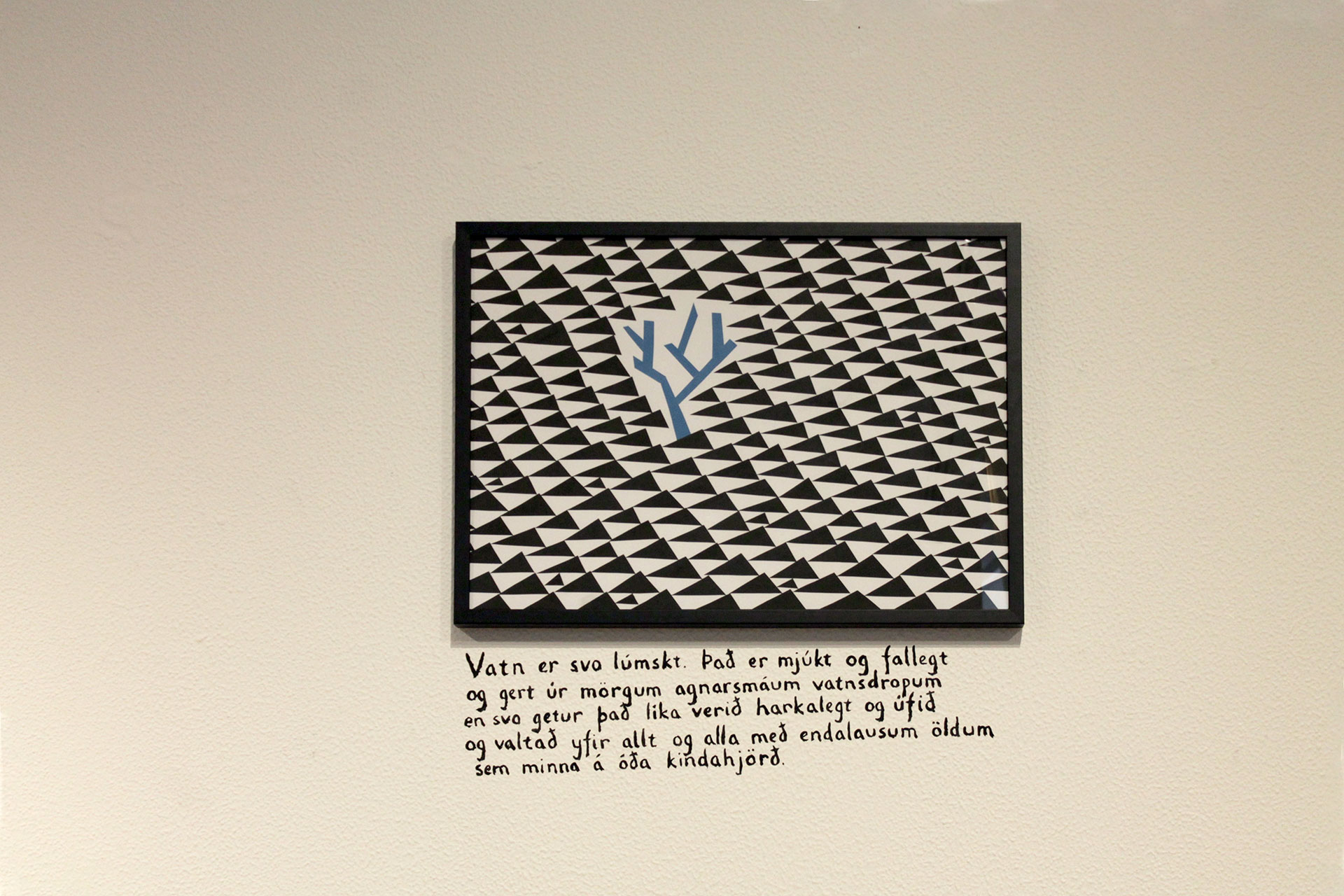 Halla Birgisdóttir’s work highs/lows occupies a long wall of the room filling it with drawings topped with short sentences, sometimes just single words, which express feelings, states, thoughts of the characters portrayed. Her work adopts the guises of a sort of comic stripe with no narrative: the characters appear just once, the words do not conform to comics’ dialogs, but they are captions of inner states or thoughts. The only element these drawings share with each others is the role of the weather which arouses emotional responses in the characters. Birgisdóttir portrays men, women, human beings caught in intimate moments, she explores the many ways in which the weather still influences our inner selves by illustrating our inner weather forecast. 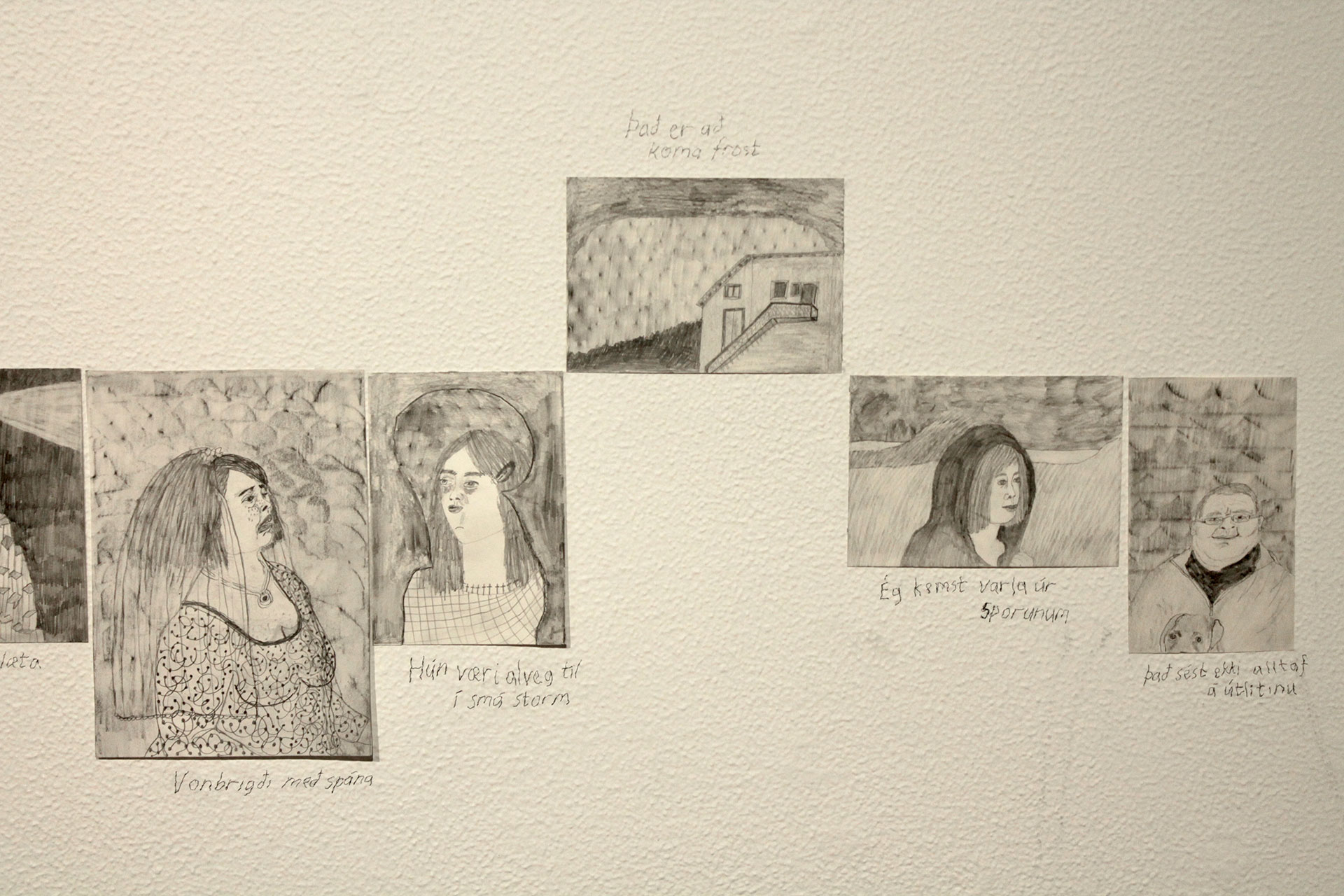 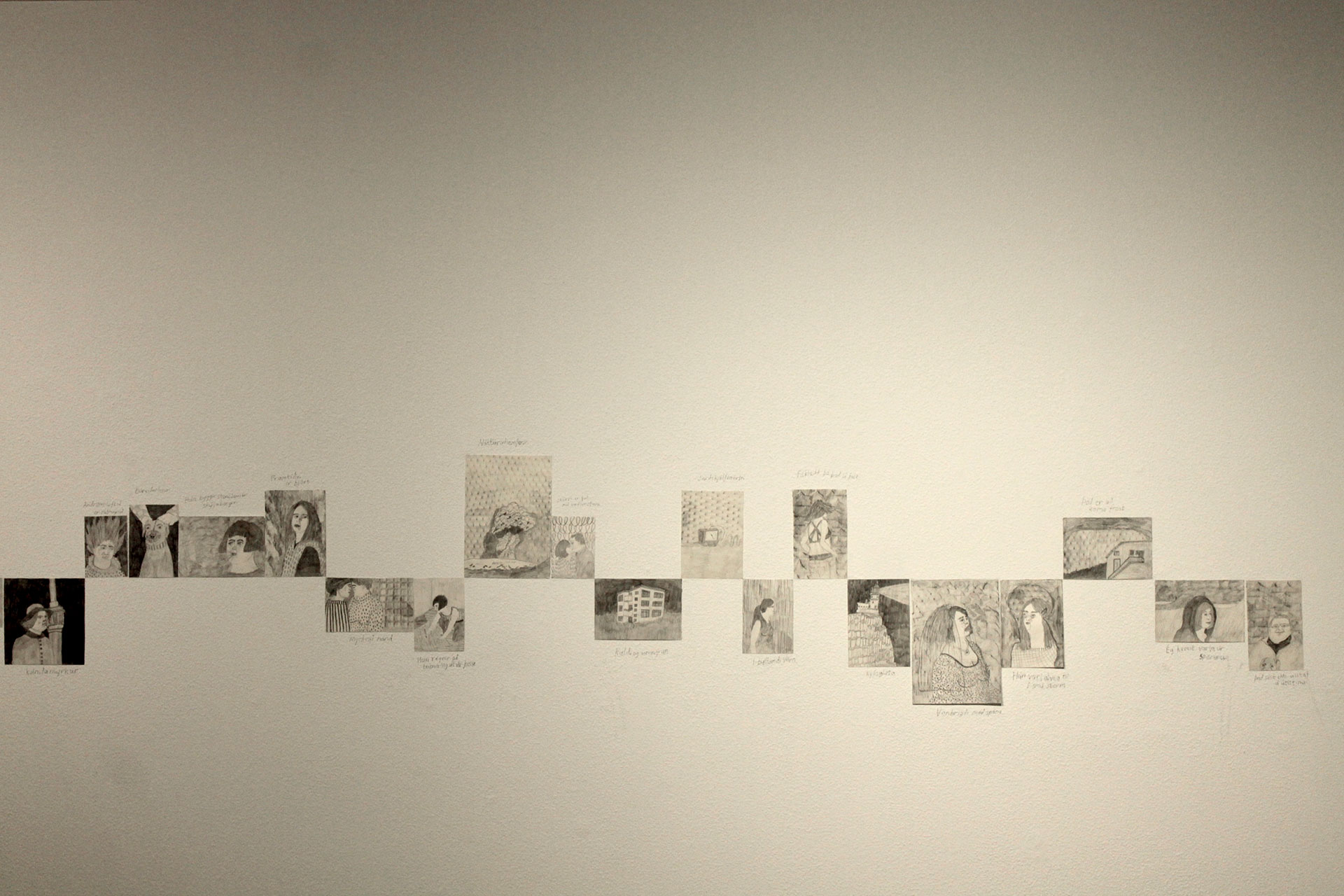 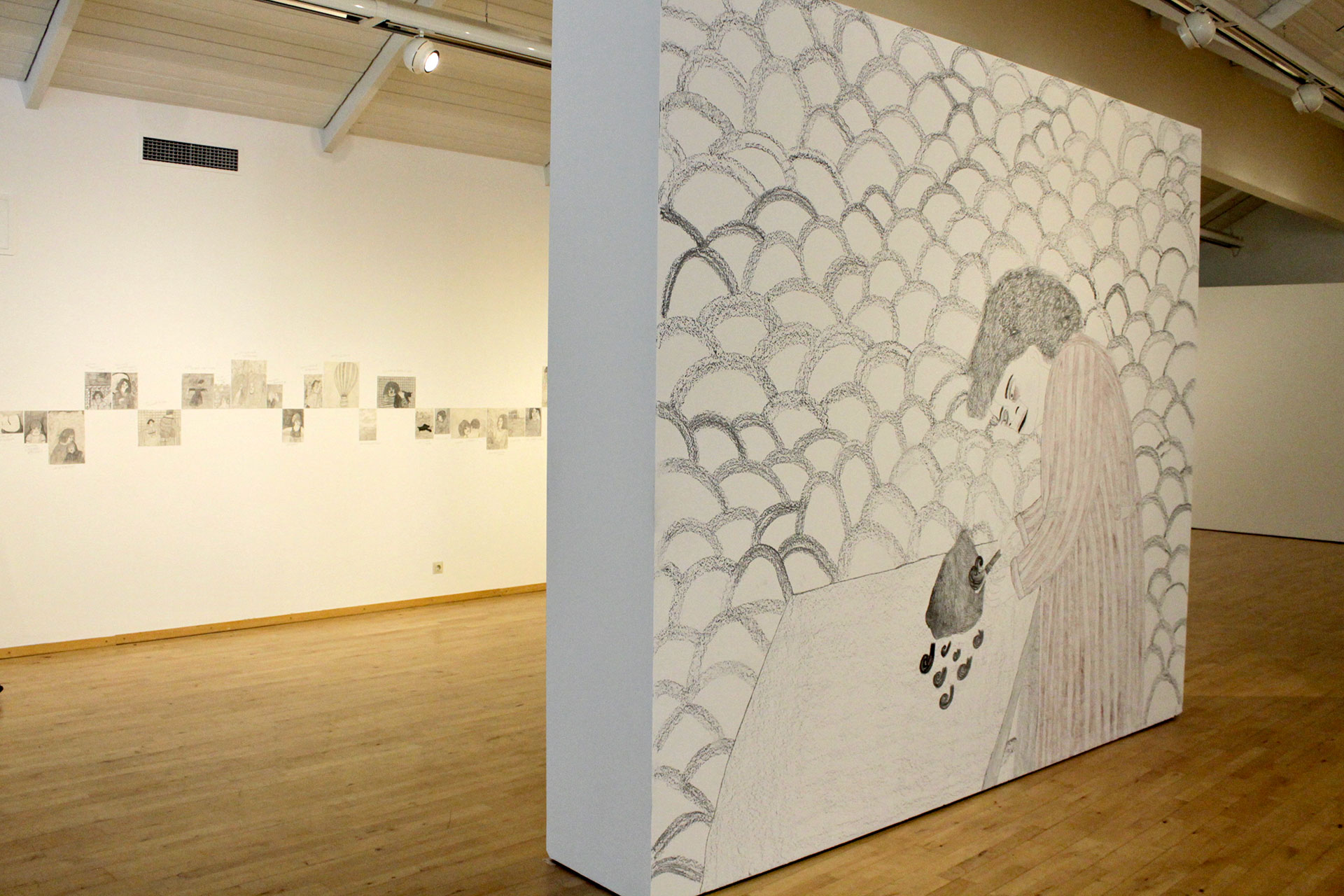 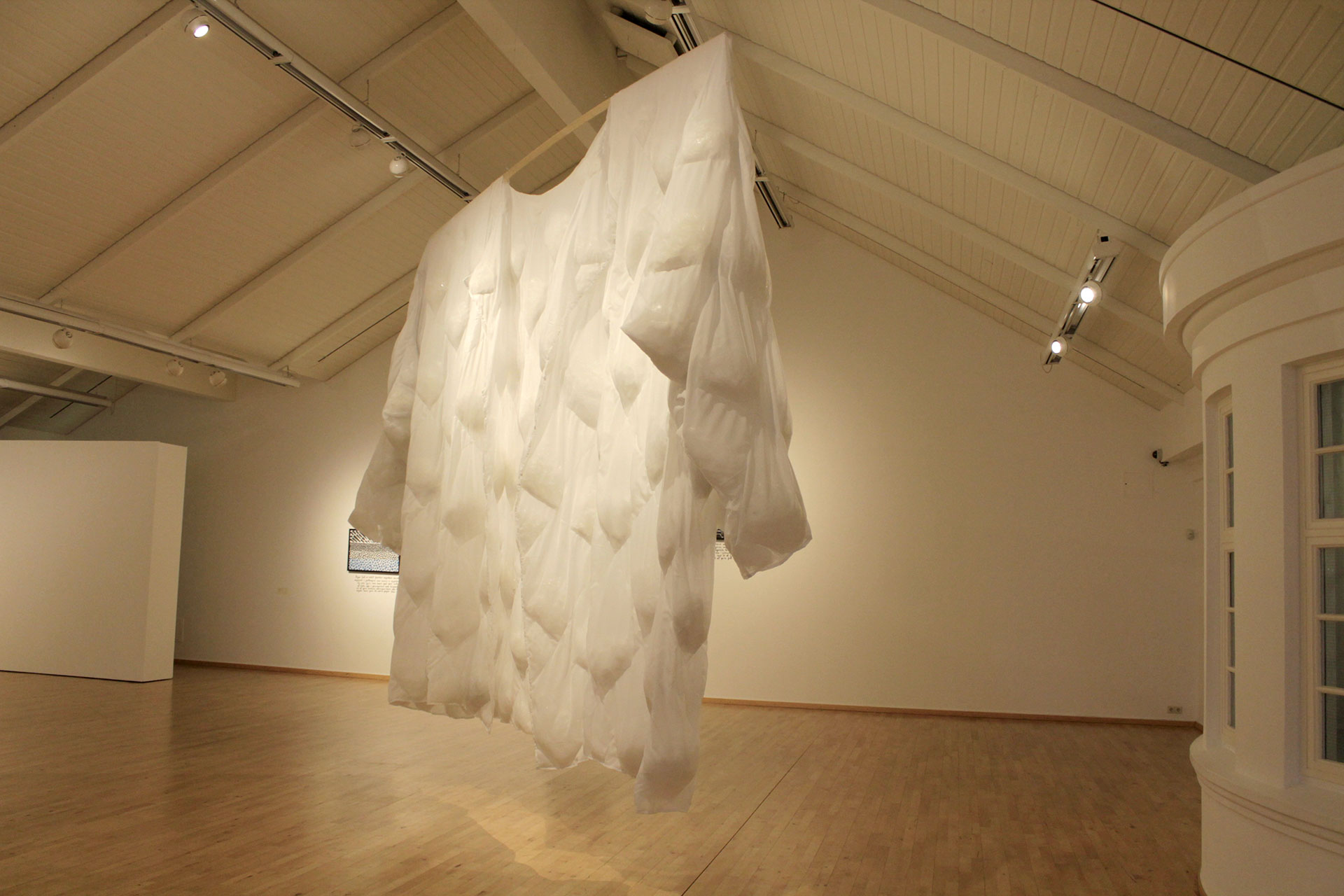 Sigrún Hlín Sigurðardóttir works within the contemporaneity, she sees clothes as a meeting point between the weather and the human beings, layers of fabrics which create an intermediate bridge between us and the natural elements. For the show Come Rain or Shine she created a huge winter jacket, which, despite its big dimensions, gives an impression of lightness: it is made out of fluffy plastic material stuffed into a semitransparent fabric, and hangs from the ceiling as it was floating in the air, suspended in the space, resembling a cloud formation standing in the sky. Winter jackets, as well as many of our clothes, have an inherent contradiction: they are made to protect us from the weather, but the synthetic material they are made of, plus the consumerism affecting the contemporary society, transforms jackets into a non recyclable waste in a short time, contributing to the increasing of pollution. We protect ourselves from the weather by using something which damages our planet and, consequently, affects the weather, so that we will need to shelter ourselves into more layers, and the history repeats itself over and over.

The curator Marta Sigríður Pétursdóttir has been able to coordinate a show where the pieces by the five artists work together: each of them apports a personal research to shape a comprehensive overview of the environmental problem the world is facing, sending out a clear message.

We are part of something bigger, and, as Timothy Morton says, the whole is not bigger than its part, but instead it is smaller: a hand it’s made of five fingers, countless muscles and nerves, but it’s just one hand, which sounds extremely reductive. If we endeavour to invert the course of the progressive destruction of planet earth individually, we may achieve some results, but first we need to realize how important the weather is for our lives, and the show Come Rain or Shine has this first step covered.