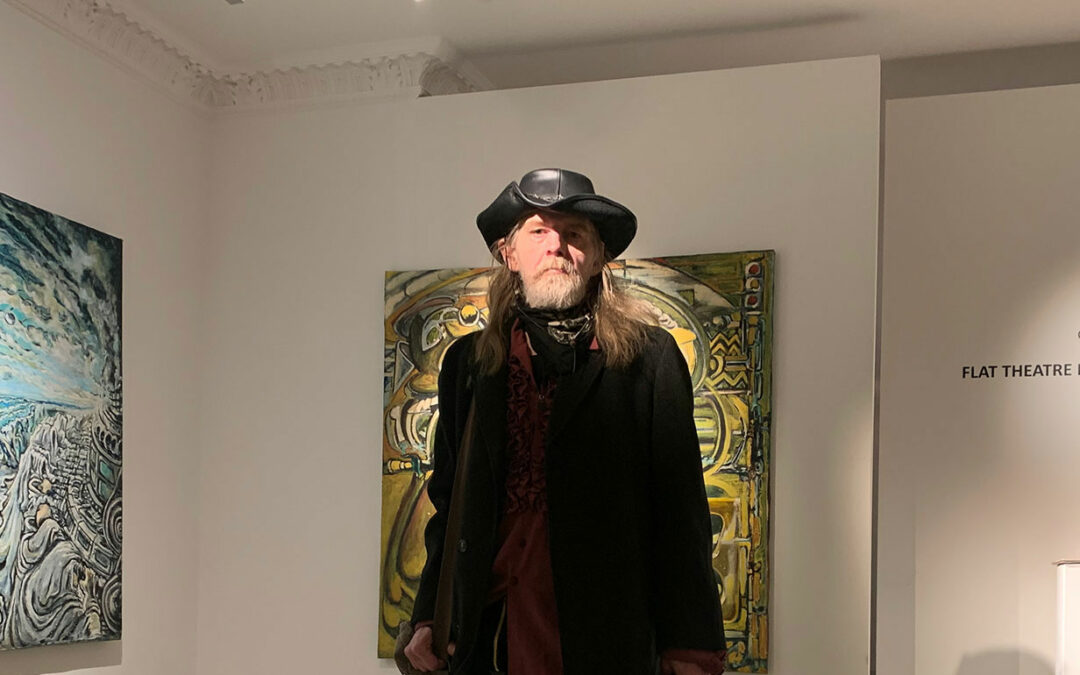 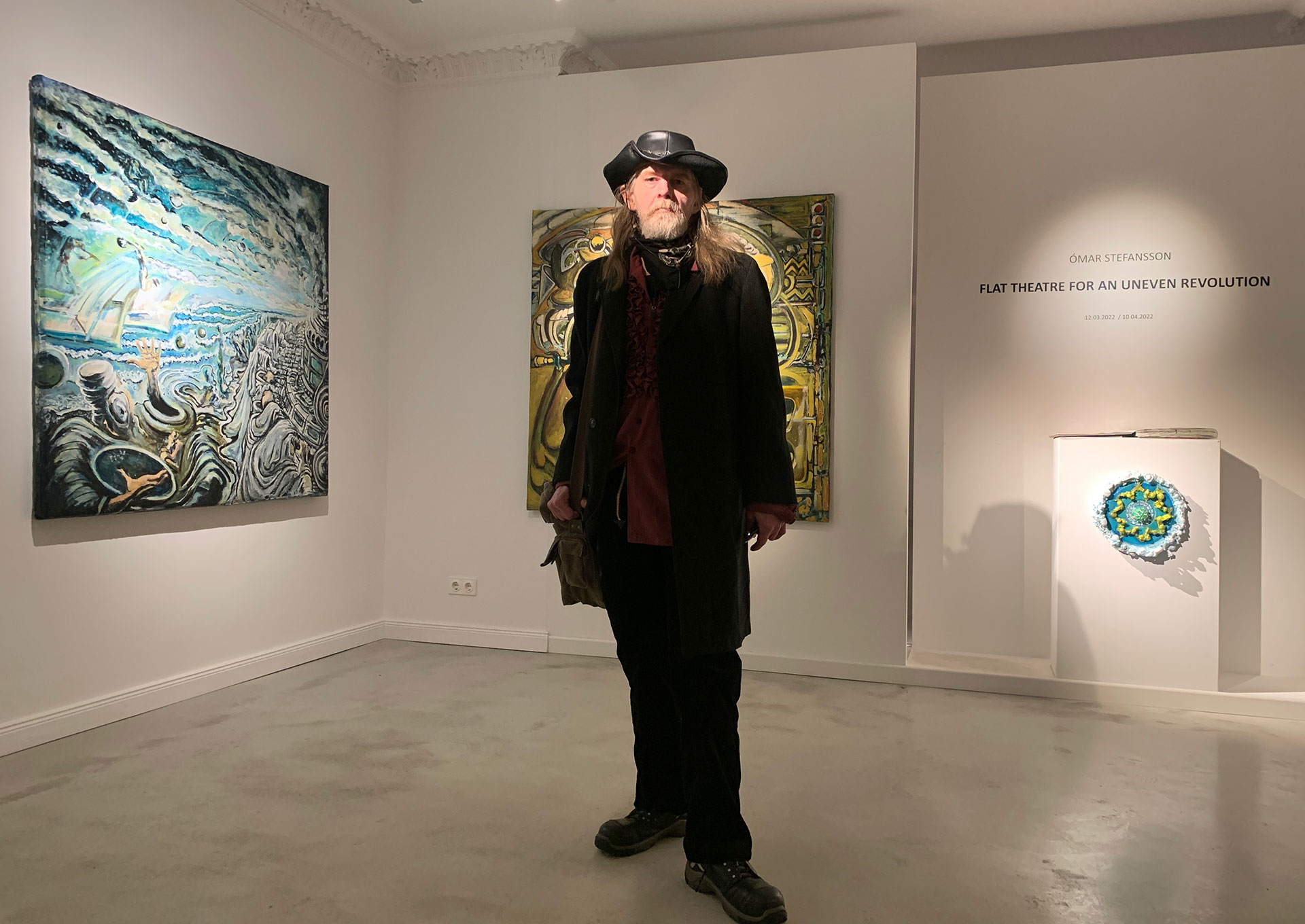 „The sorcerer destroys the deception of the Creator, by creating another deception instead. But at the same time, it is important that he immediately eliminates all the deceptions he himself creates“

The Icelandic visual artist, Ómar Stefánsson, is known by many for his unconventional ways of life and art. At the age of sixteen, he gave an interview to the Icelandic paper, Vísir, as a young artist and a magician. The same year he got admitted to the Reykjavík School of Fine Arts at an exceptionally young age, where he graduated from the then new Experimental Arts Department in 1981. His art career now spans in huge excess across painting, sculpture, writing and published books as well as notorious performance work staged with the Art Brut bands Bruni BB and Inferno 5

Throughout his art career of almost 50 years,  Ómar has been consistent with the concept of his work, as seen in the above quote from the 1976 interview with Vísir. The controversial satire of human history, science and religion is a never ending theme and nothing is ever as it seems.

The exhibition Flat Theatre for an Uneven Revolution at ForA Contemporary Platform in Berlin, features paintings, sculptures and diaries that were made in the past five years at the artist’s studio in the metropolis city of Germany. These works tell, among other things, a story about the social transformation that took place during the pandemic, mixed with other dizzying chaos. For example the astronaut who almost drowned in his own piss. Thus, the exhibition leads us through the poetic and grotesque satire of human beings who live and die. A cloud-enclosed vault controls floods and tides, while the human being belongs to gravity along with other bottom creatures that it reflects on, in its daily activities. 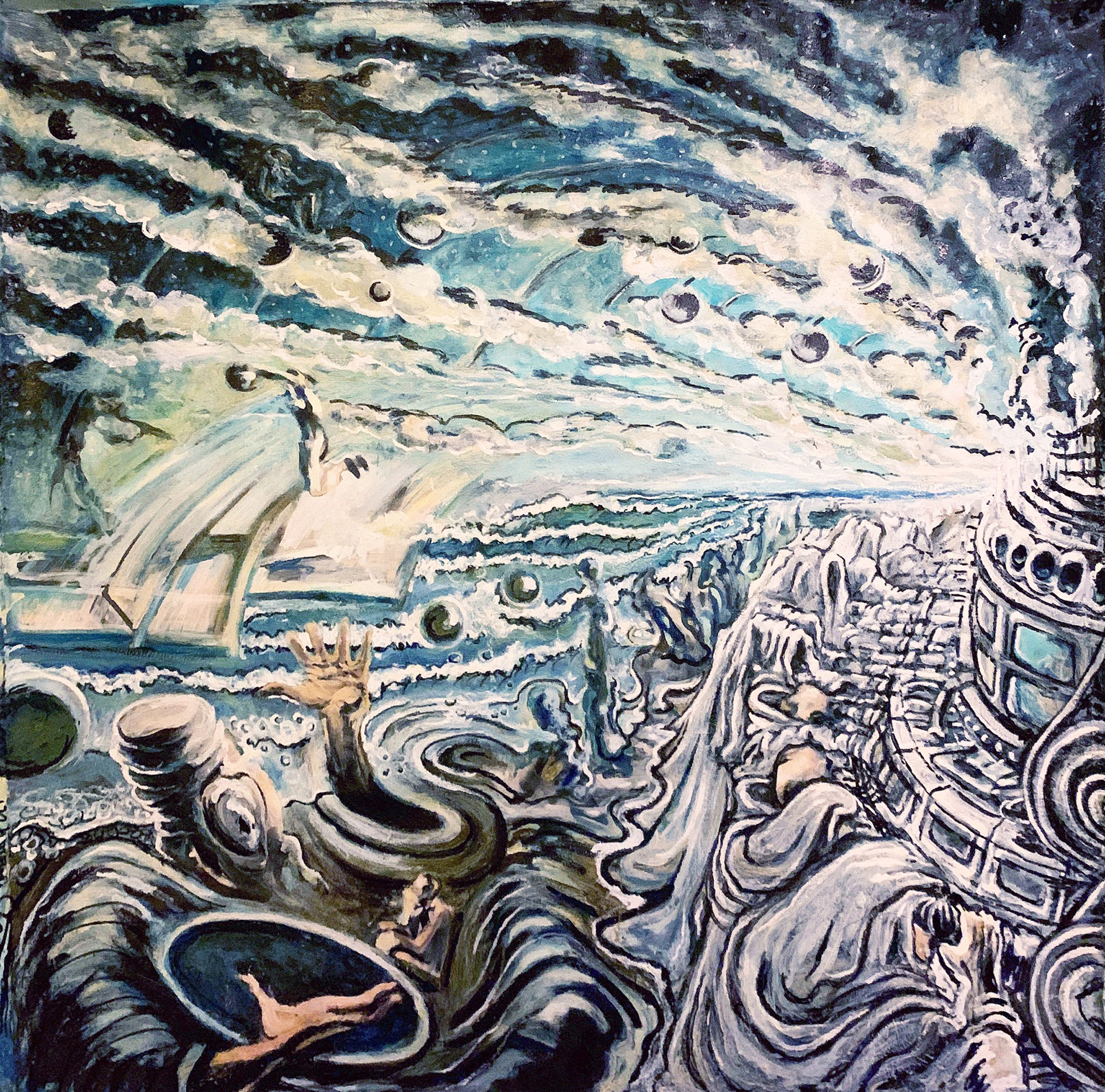 „Flat theatre is simply an explanation of what is going on here, the translation of things unto a two-dimensional surface, such as when maps are made. For example, where three-dimensional landscapes are projected onto two-dimensional surfaces. There are many methods for this, all of which are just as correct, or just as misleading, depending on how you say it, the glass is half full or half empty“

Ómar’s student years include performance tours along with Hermann Nitsch around Europe, an internship with Dieter Roth and jobs with the Illuminati congregation in the Alps in Switzerland. All of which can be seen to influence his work to this day. Ómar went to Berlin to further his studies and became a Meisterschuler with Professor Fussmann at the Hochschule der Künste in 1987. But fate brought Ómar back to Berlin about 30 years later when he lost his studio in Reykjavík, and at the same time he started keeping a diary in German where he describes his daily events through words, collages and drawings. Thirty diaries with his reflections, ideas and destiny now cover Ómar’s stormy years in Berlin 2017-2021, which end with a near-death experience, a physical death – „and rebirth in the zodiac sign of Scorpio in November 2021“, the artist adds and starts boasting about their new birthday. 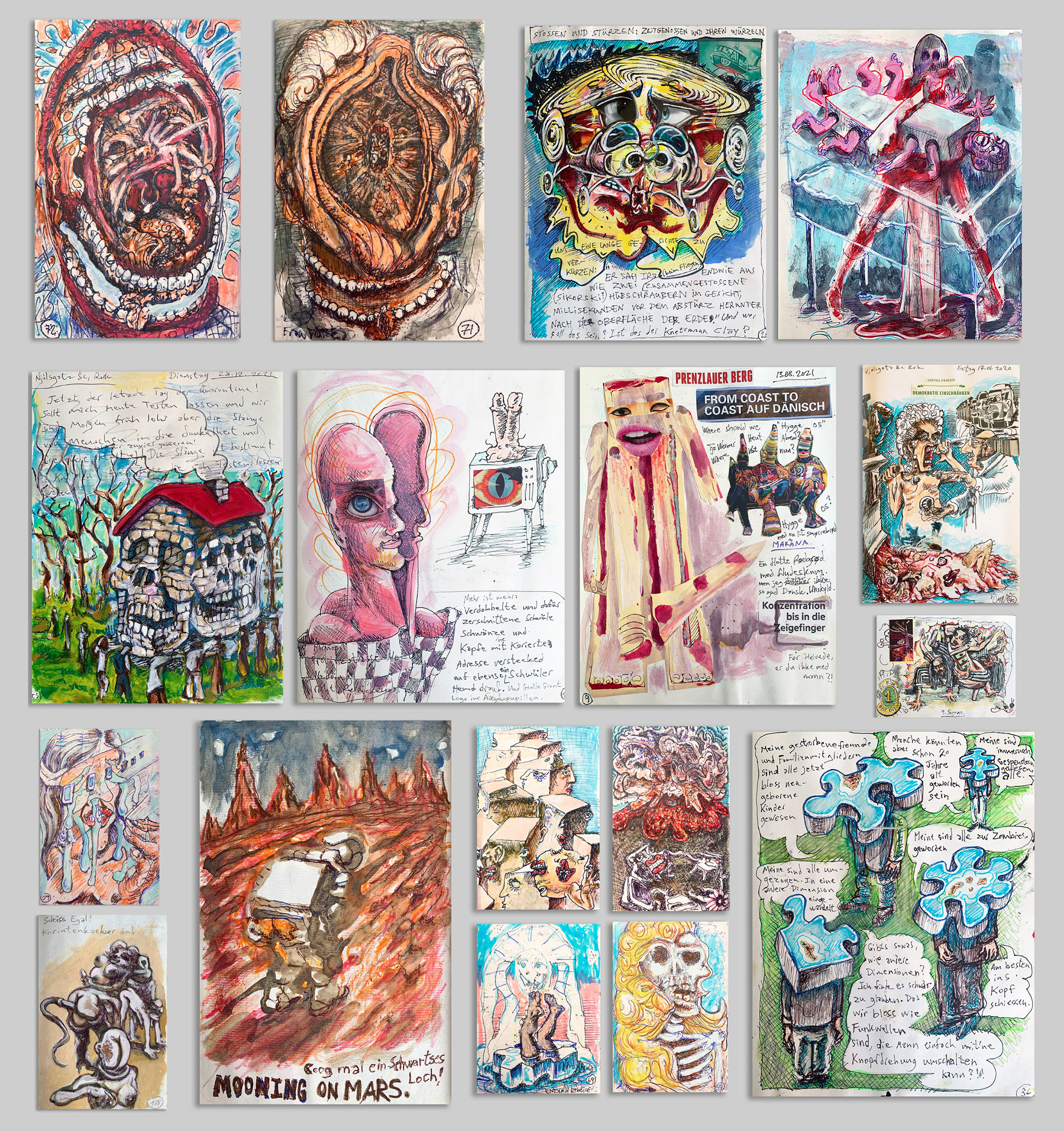 Samples from the Berlin Diaries, Vol. I – XXVI.

The architecture of words and ideas speaks to the tangible structure of buildings in Ómar’s paintings, which are both formal and surreal. Forms take on a vivid structure that seems to be able to move and rearrange at any given moment. Man grows into himself, out of himself, becomes a house, becomes an animal and swings in the world, on the playground of existence. The exhibition at ForA gallery includes paintings about cosmogony and all kinds of uncertainties, what the artist saw during the pandemic in Berlin but also personal still lives.

„Every artist must make at least one Tempus Fugit work (Lat. Time flies) … And think of death. Every artist must think of death. And it happened to me here in Berlin, for example, to just fall ill and die and that was not my plan at all. And at this exhibition here we also have art which you can learn from. There’s a box that says what is forward and what is back. I had an intellectual conversation about this painting at the opening with a professor of philosophy and a dispute even. I was very pleased that this picture should provoke a controversy, even though it’s just a picture of a box. I said at least up and down were obvious facts. But there are different of opinions about that as well even“

We seem to live in a ready-made world where nothing is accidental. But the same cannot be said about the drawing in Ómar’s paintings, which appear to man as a wild and untamed phenomenon. Powerful and confident strokes draw a world that unites all the art movements of the 20th century, even further back. The violent and unrestrained subject matter has an obvious connection to the works of artists as diverse as Otto Dix, Hiernonymous Bosch and Hans Bellmer. 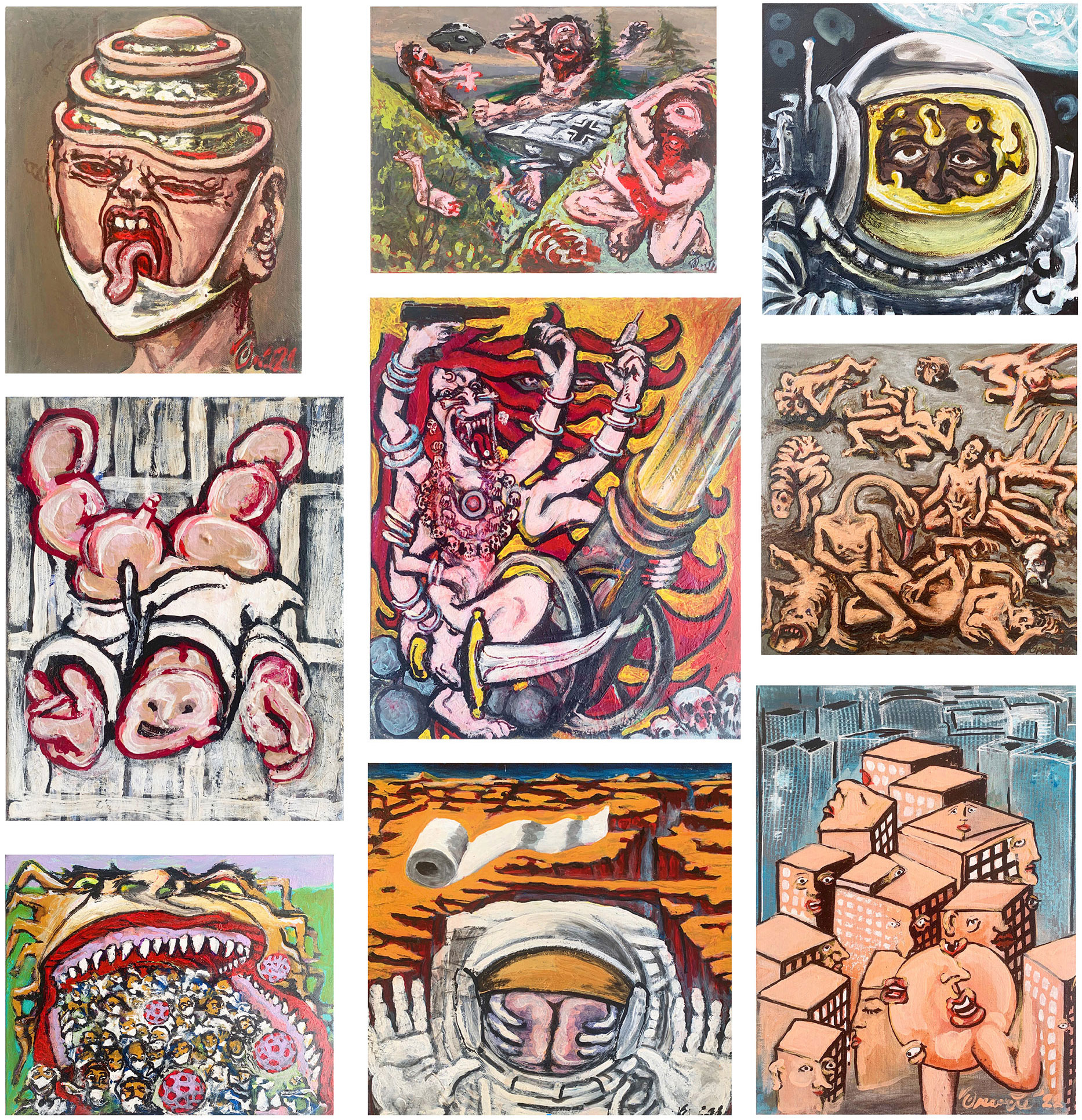 Paintings from the exhibition Flat Theatre for an Uneven Revolutio. From left to right: Infected, The Battle of Amari with the Cyclope Cannibals in Crete, Inflated man falling, KaliYuga, Farming for spare parts, Choronzon, Mooning on Mars, The crazy old town.

In Ómar’s abstract paintings and sculptures, however, one can discern the influence from his mentors Dieter Roth, Hermann Nitsch and also Magnús Pálsson, the founder of the Icelandic Experimental Art Department. Fast and energetic work methods give rise to grotesque lines and shapes in action works done with paint on canvas, mixed media and found material. Every now and then, comical titles pop up, which give this frantic world of images another angle. However, Ómar is better known for his large-scale paintings, which testify to his unique mastery of the medium and his great drawing skills. These paintings refer to the image structure of the cubists, futurists and surrealists and, at the same time, the dimensional illustrative tradition of graphic comic novels.

The art works currently on display at the ForA exhibition are also remarkable for having escaped unscathed from the artist’s years in Berlin. Some of Ómar’s works was kept in storage at a building in the city which caught fire. He rented a studio in a building along with hundreds of other artists in Lichtenberg, which was confiscated with one day’s notice causing him and others to lose all their belongings in consequences that will not be listed here. „You are not human until you have lost everything“, says Ómar and quotes his former teacher at the Living Art Department, Magnús Pálsson, but it is obvious that the loss takes a heavy toll on him.

Panorama from Ómar’s studio in Lichtenberg, Berlín, 2019. Click to enlarge the image.

The pages of the diaries Ómar kept in Berlin are filled with drawings and collages that translate, like the Flat theatre, the five-dimensional reality of the artist’sinner world onto a two-dimensional surface. From the amount of books and the pages completed in these five years, it is clear that the artist does not let a day go by without working with these disciplines.

Even while the artist was in the intensive care unit at the hospital, the time he had awake was used for art creation and writing, with collages compiled from the hospital’s food stamps and the near-death experience written similar to other documented accounts surroundingthe deathbed. According to Ómar, he was suddenly dragged on his feet through a tunnel, which eventually led him back into the world, but not away into the light.

And what was it like to die? „It was absolutely awful … Stay alive as long as you possibly can“

In fact, it can be said that Ómar Stefánsson’s entire art career offers the audience a highly dramatic Flat Theatre exhibition. His art exhibitions and their preparation, art brut performances and their consequences, excerpts from declarative interviews with him, as well as the audience’s accounts of his fate throughout his life. All of this paints a vivid picture of an artist’s life trajectory who has walked untrodden and uneasy paths through life. Victories meet defeats in the rough oceanic waves of the typical artist’s life, which, however, form a decent curriculum vitae today. A lifespan of an uneven revolution where nothing is ever as it seems, with struggle between good and evil as serious and comical as it can be at the same time. Even when the artist himself is obviously upset about what he’s sharing, he uses his sense of humor as a tool in his narrative. His own near-death experience becomes a source of endless jokes. And what is right and what is wrong, what is truth, what is deception… the world contains only endless questions and hairy answers.

And do you really think the world is that confusing? A guest at the opening was heard asking the artist  – Yes and even more confusing than I could ever interpret in this show.

Flat theater, of sorts
at the parking lot of existence

Squares move
and on them triangles feed.

It all goes in circles,
yellow, blue, red,

Flat theatre, of sorts,
in the parking lot of existence.

The end of reality,
sort of. 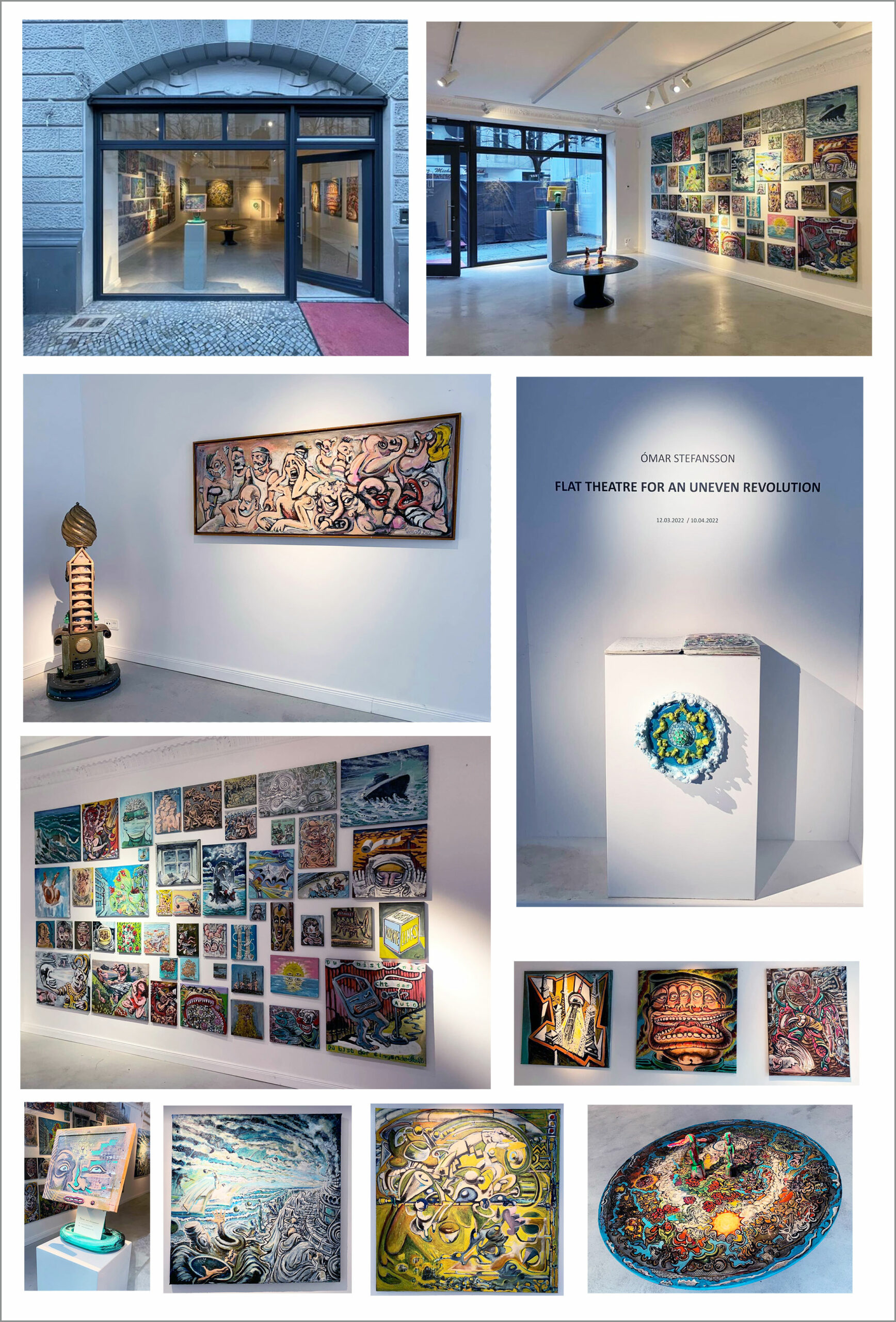 Ómar Stefánsson was born in 1960 in Iceland and has exhibited at the Reykjavík Art Museum, the National Gallery of Iceland and had numerous solo exhibitions in Iceland. Works by him have also been shown at Heine Onstadt in Oslo, Norway and at an exhibition with Cy Twombly, Joseph Beuys at Gallery Händschin in Basel, Switzerland. The National Gallery of Iceland and the Reykjavík Art Museum have paintings by Ómar in their collection as well as the Technical School of Iceland, Eimskip and an Illuminati congregation in Switzerland. Ómar also created works especially for the train station in Basel, Switzerland, together with the artists Dieter Roth, Dominik Steiger and André Thomkins.

Further information about Ómar Stefánsson, his work and exhibition can be found at the sites omarstefansson.com 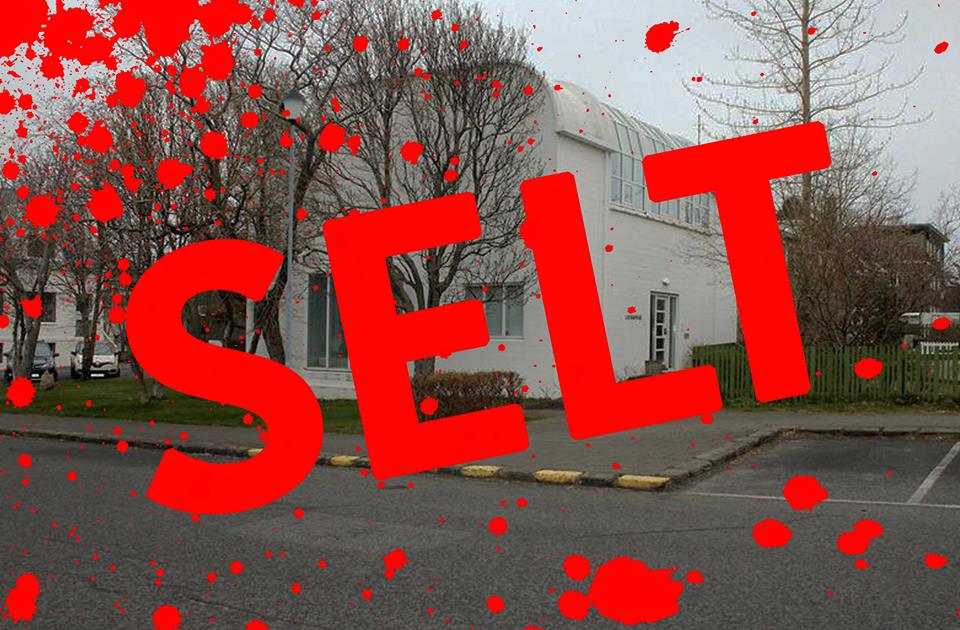 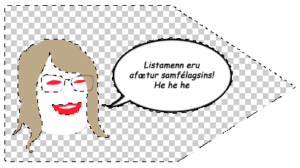 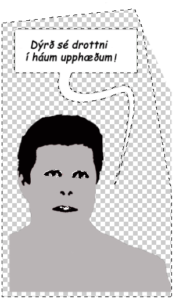 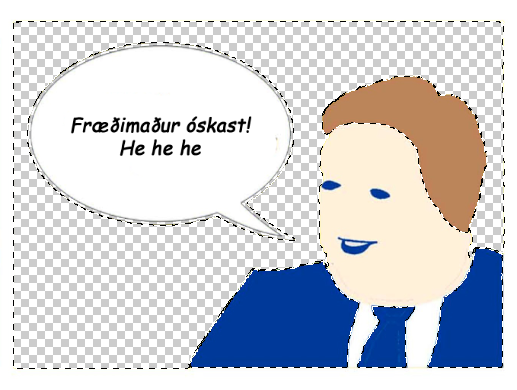 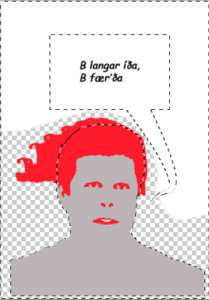