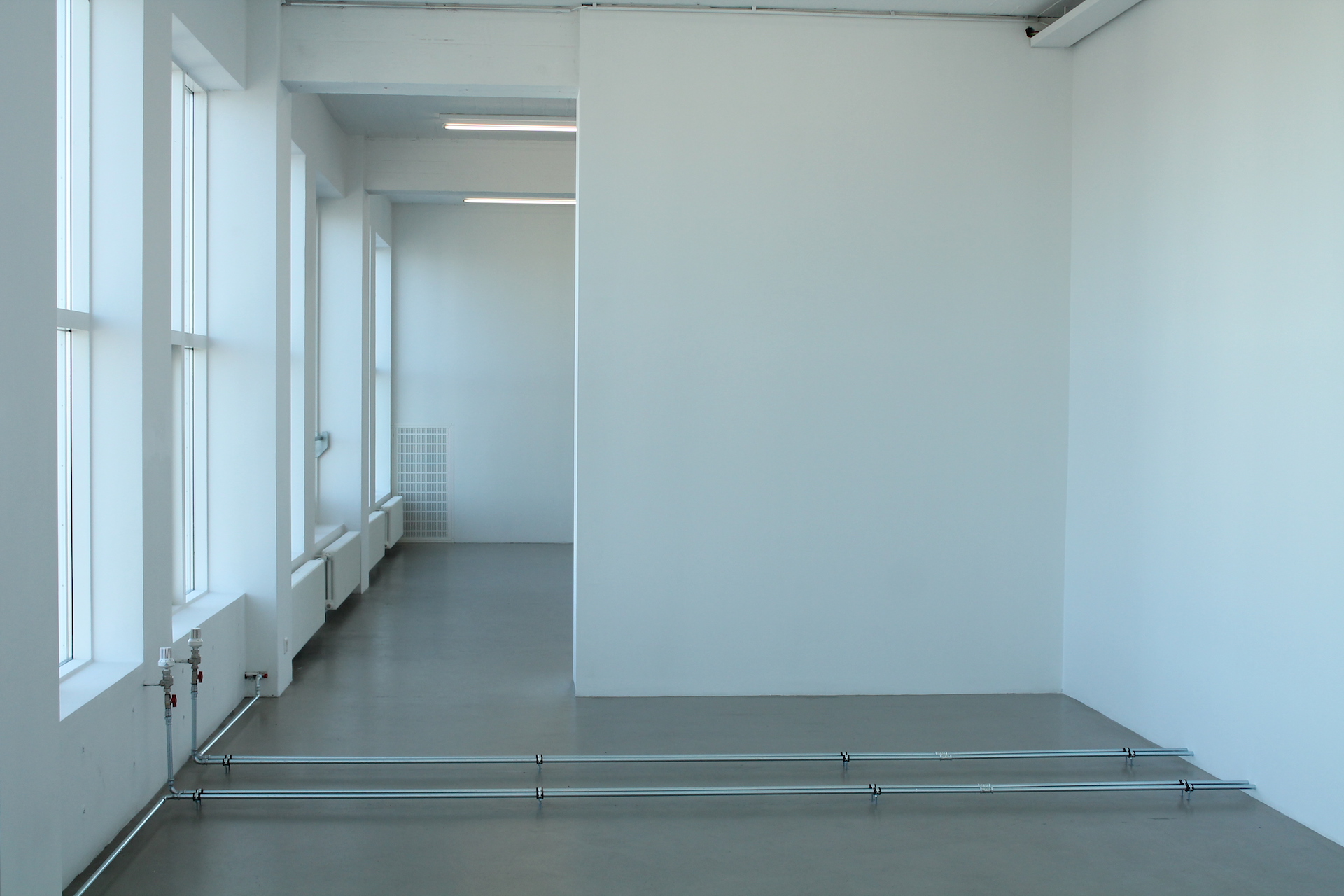 A Kassen’s exhibition „Mother and Child“ at Kling & Bang

The exhibition Mother and Child by A Kassen acts on the relationships between the viewers, the architecture and the artworks, inviting us to look at things from different points of view and to take into account the physical space surrounding us and the works. Mother and Child is a show that seems to confront borders, engaging with the architecture which at some point seems to be both the subject of the exhibition and the viewer to which the show is addressed.

View from below (Standing woman) is the first piece we encounter. The work is to be enjoyed from two locations which offer completely different angles on the piece: it can be seen from Kling & Bang, from where we get an actual view from below the basis of the sculpture, and from the Living Art Museum, the exhibition space downstairs, where we can enjoy the sculpture emerging upside down from the ceiling. This work operates in the specificity of the Marshall House, in fact it functions as a connection between the two exhibition spaces. Kling & Bang, the Living Art Museum and the Stúdió Ólafur Elíasson are three art spaces which coexist in the building without really collaborate with each other, coming together every other year when the Reykjavik biennial Sequences takes place, but keeping their activities separate and the borders between them quite defined during the rest of the time. Kling & Bang and The Living Art Museum have a really intertwined history as they used to collaborate intensively, but nowadays they both want to keep their own identity, which is completely understandable. However, it is somehow pleasant to see a sculpture breaking through these limits and creating an element of disruption into the everyday order.

Sculptures, unlike paintings, are made to engage with visitors in a different way, statues extend in three dimensions and this allows visitors to move around them and contemplate them from different perspectives. However, showing a view from below of a sculpture is not a conventional way of exhibiting it, therefore when making sculptures I believe few artists consider the viewer’s gaze from that perspective. Allowing the viewers to examine the underside of a sculpture translates conceptually into letting them glimpse a more intimate part of the artwork, where the relationship of the artist with the piece is unveiled, a part which is not usually meant to be seen and therefore contains traces of spontaneous and unrefined gestures. The statue is a classical female nude statue, and the view from below doesn’t actually offer much to see: the square foundation of the sculpture is embedded into the floor, two small footprints from which two holes constituting the legs origin and disappear into the dark interior of the bronze cast sculpture, but the conceptual twist is that the piece somehow lets viewers peek into the secret of art-making. 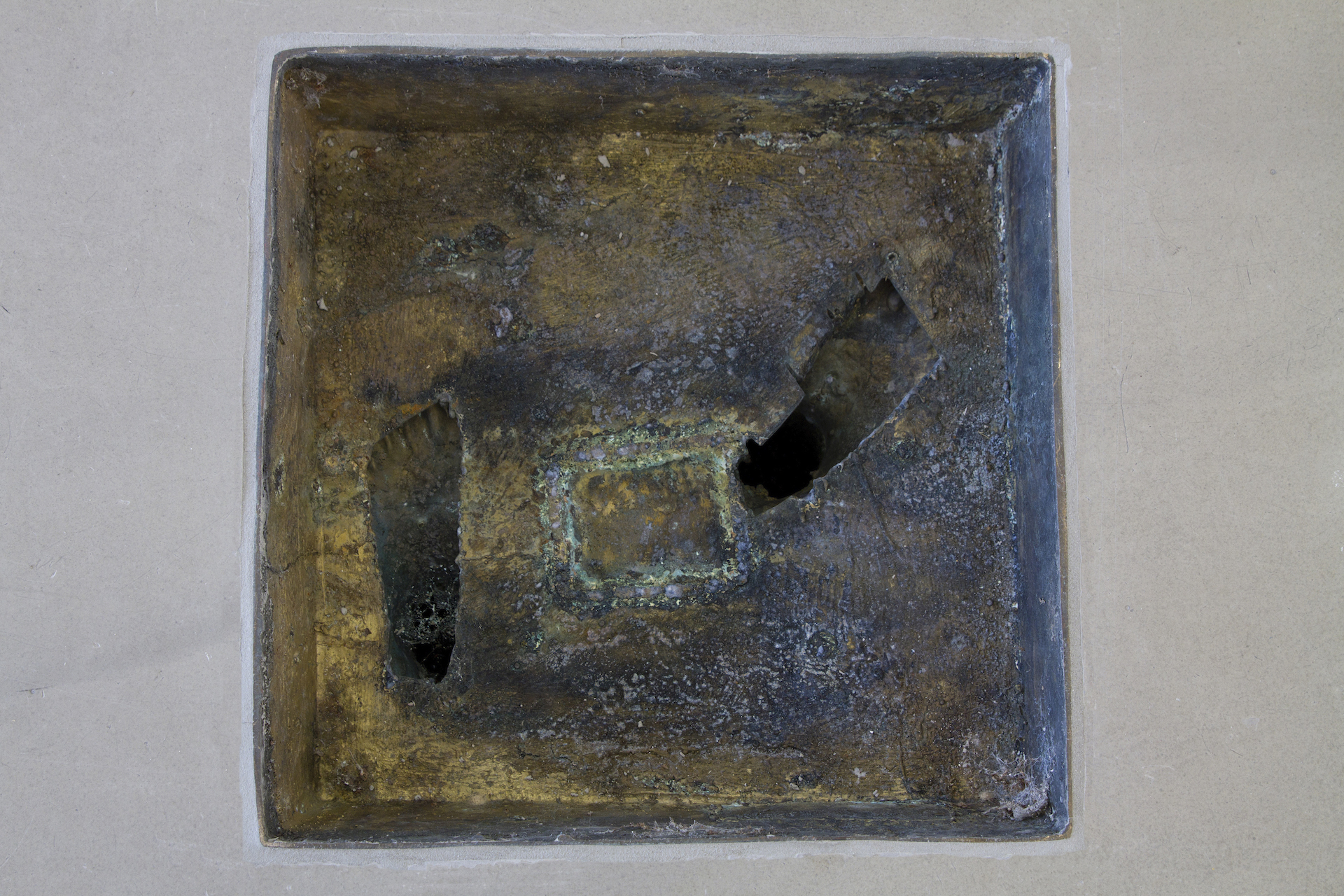 A Kassen, View from below (Standing woman), view from Kling & Bang. Photo credit: A Kassen. 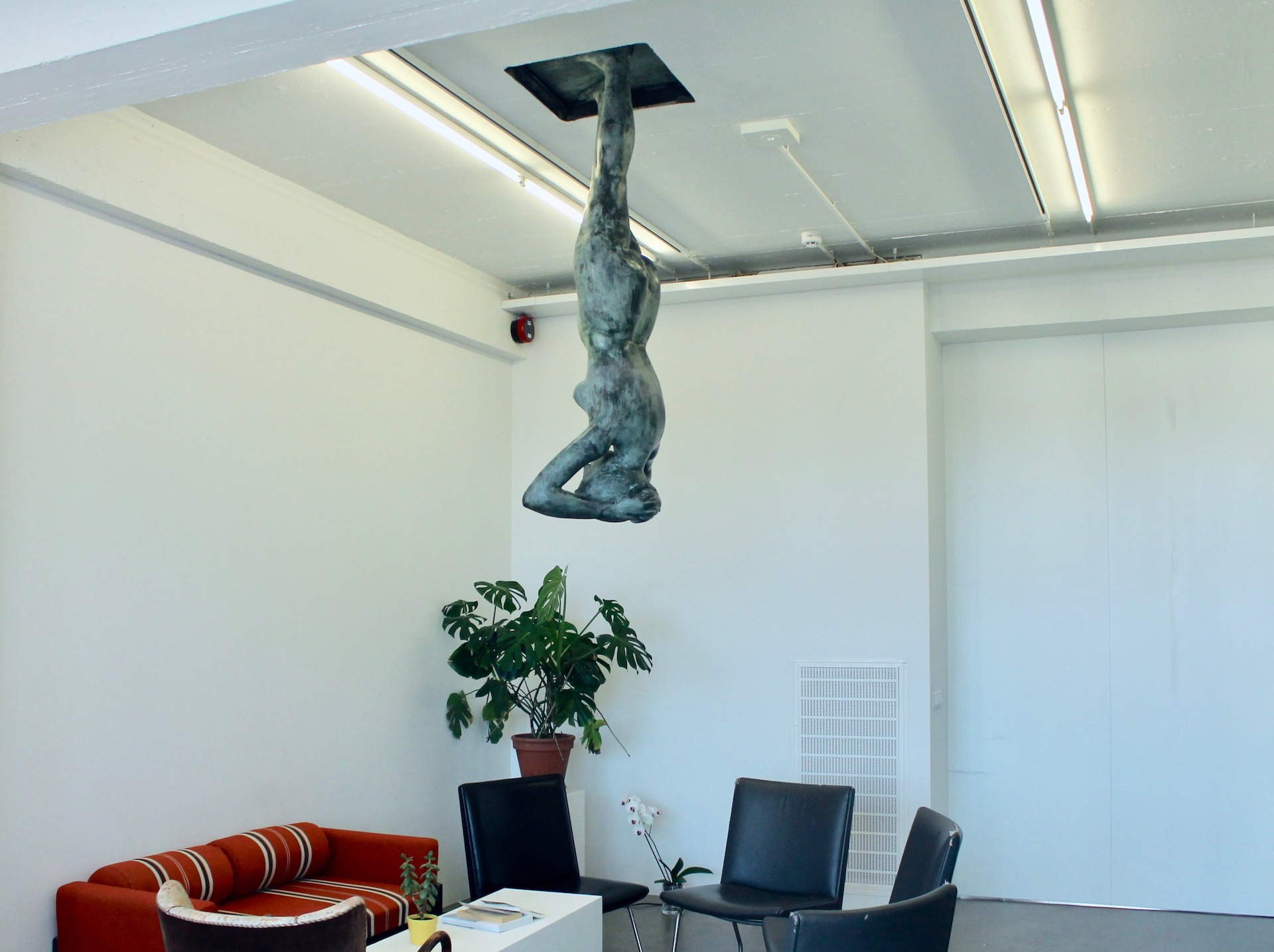 Walking into the second room of the exhibition space we encounter the work Exhibition Poster (Marshall house) which constitutes a pile of posters depicting the ceiling directly above the work. Unlike most of the artworks exhibited in museums and galleries, this one can be taken and brought home by visitors. This gives the possibility for that specific bit of ceiling to become a mobile object, inverting its characteristic of being static, countering our idea of buildings as immobile shelters. This remarks the importance of the space hosting the exhibition, since when the poster has found a new home on the wall of someone’s place, it will recall the exhibition space, as if that was the actual subject of the exhibition. 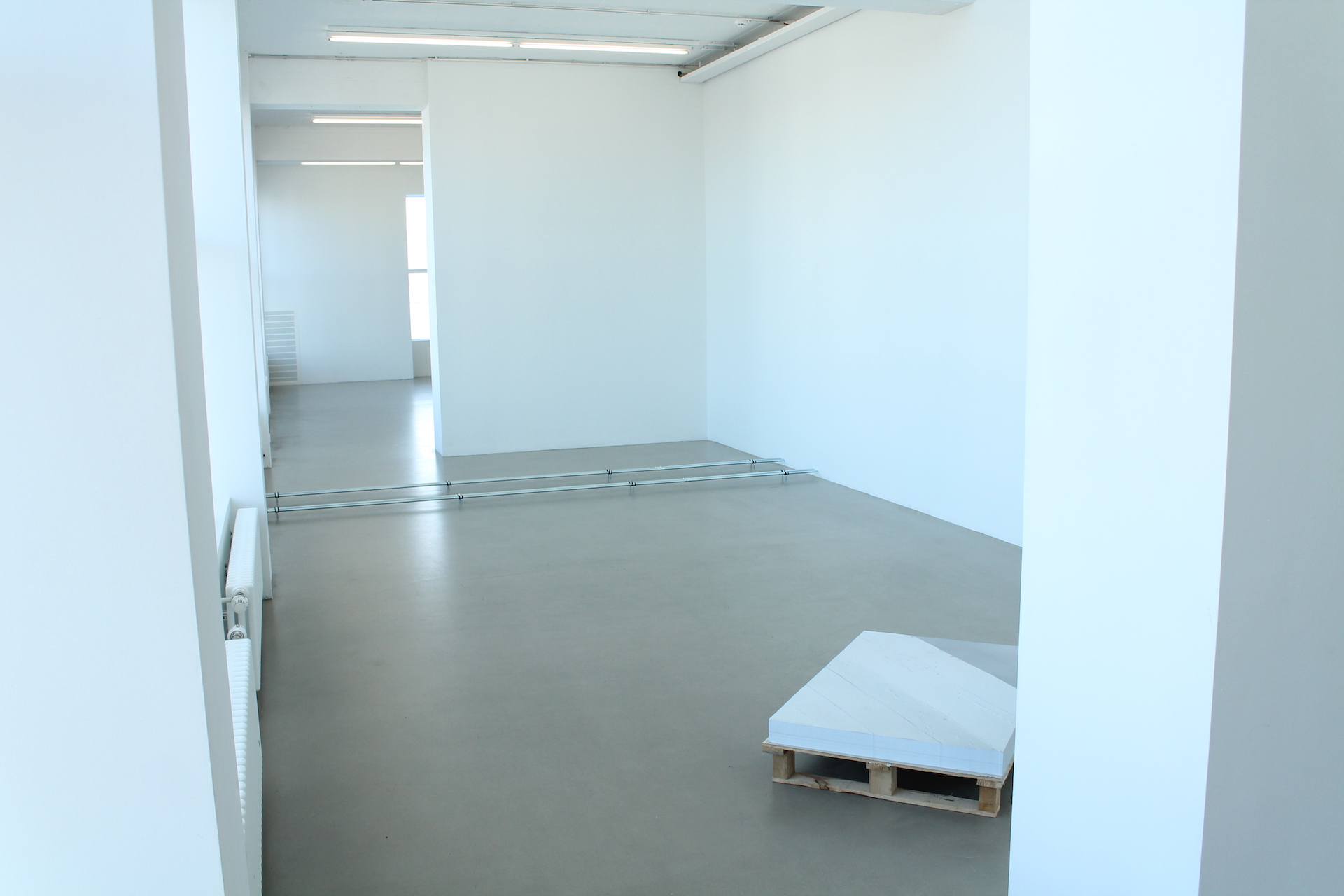 In the main room of Kling and Bang two sculptures are inserted into the floor, revealing to the viewer the negative of the statue, the inside of the cast. The upper part of these works, View from below (Mother and Child) and View from below (Il Porcellino), are not meant to be seen by human eyes as they are embedded in the architecture: the sculptures are small and they don’t make it through the floor, herby we can just picture in our mind how they look, and that comes easily since both of them are well known sculptures. Both of the works are hidden, as if their purpose wasn’t to be showcased but to bring our attention to that obstacle which blocks our view: the floor. The architectural elements are barriers delimiting private and public spaces, structures through which we organise our lives, physical borders which affect the way our lives and our society function.

These well-known sculptures incorporated into the floor make my mind runs toward those symbols which shape our society and are very much embedded in our lives, we might not realise how much what we think and do is the result of those invisible ancient structures shaping our existence. We don’t need to see a sculpture of the Mother and Child to know how it looks, because we have thousands of images of that composition in our mind, the symbol of Maria holding a baby Jesus is as embedded in our mental structures as that sculpture is in the floor. 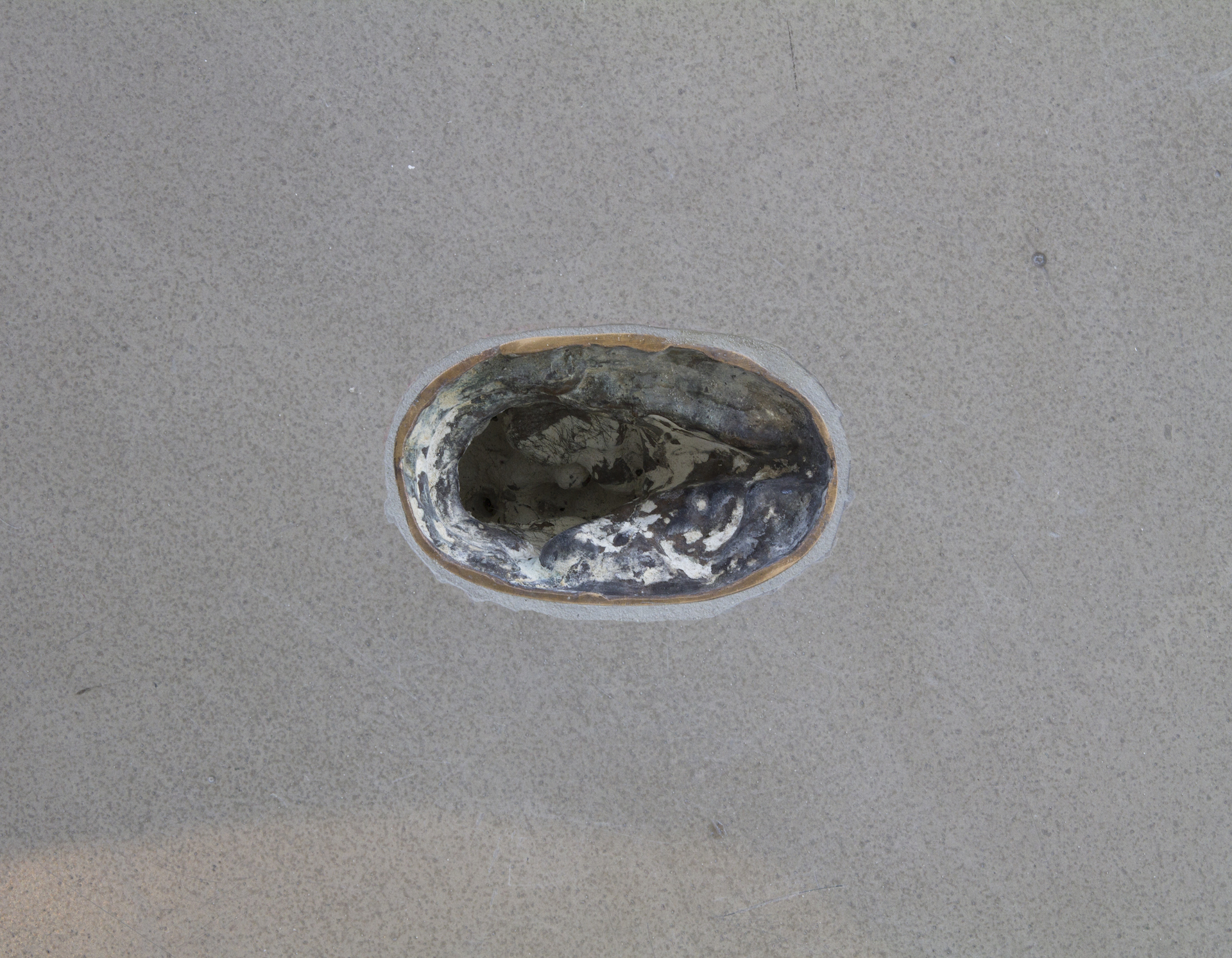 A Kassen, View from below (Mother and Child). Photo credit: A Kassen. 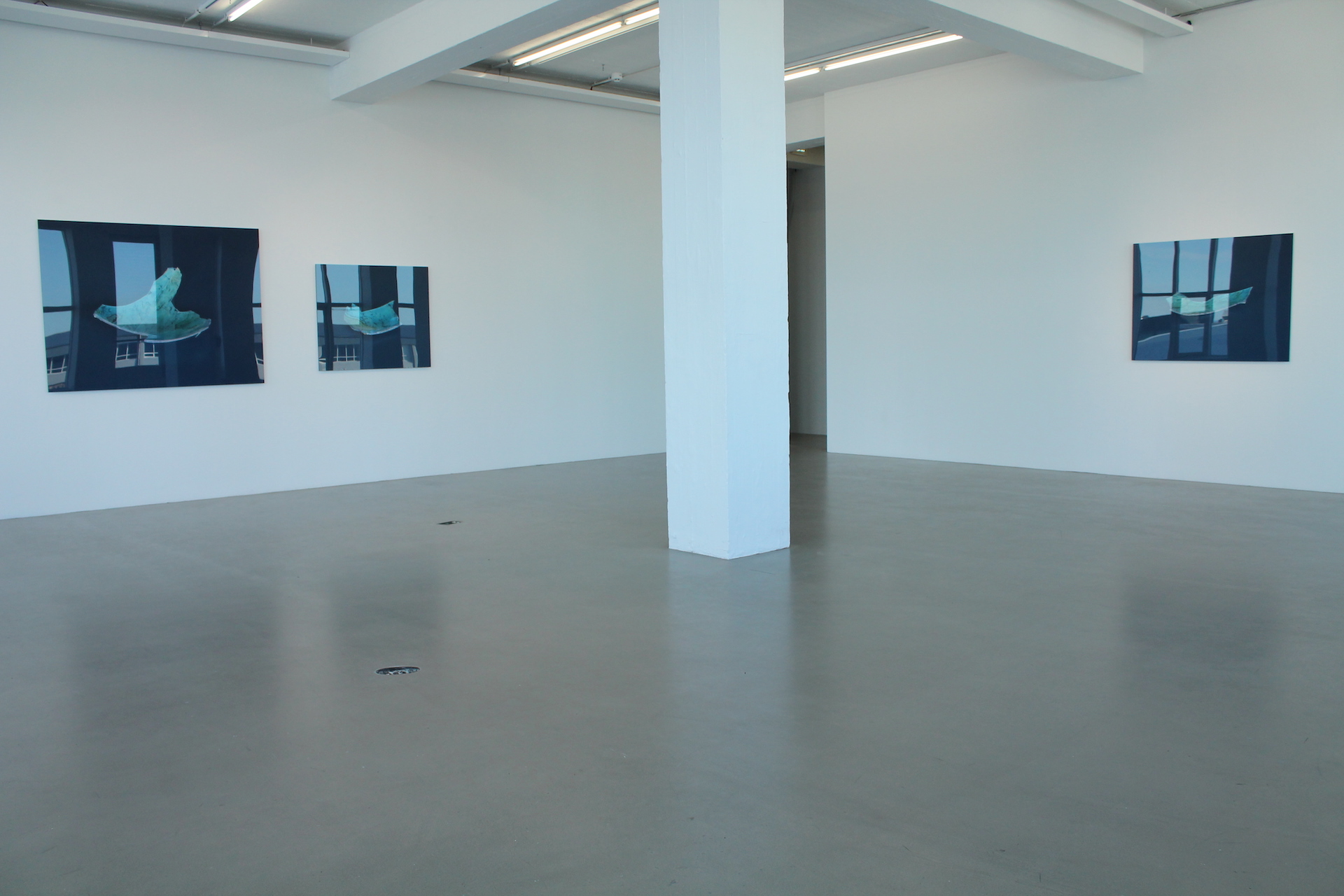 On the wall three photographs titled Oceans underneath portray pieces of a broken world globe corresponding to the oceans, where lines draw the ocean beds representing mountains emerging from the ground deep down in the oceans. On one hand these photographs seem to operate in an opposite way of View from below (Mother and Child) and View from below (Il Porcellino) as they show the viewers something one can’t usually see, on the other hand this work conceptually functions like the statues in the floor: there are various layers of representation in the works, they are pictures of the world globe, so a representation of a representation of the bottom of the oceans, and this creates a distance between the viewer and the subject, and it seems to hinder the visualisation of the object just like the floor hinders the viewer’s gaze on the statues. This piece seems to refer to the structure through which we know the world: many things we are not able to experience in first person, but we see or become aware of their existence through representations, either photographs or writings about them. 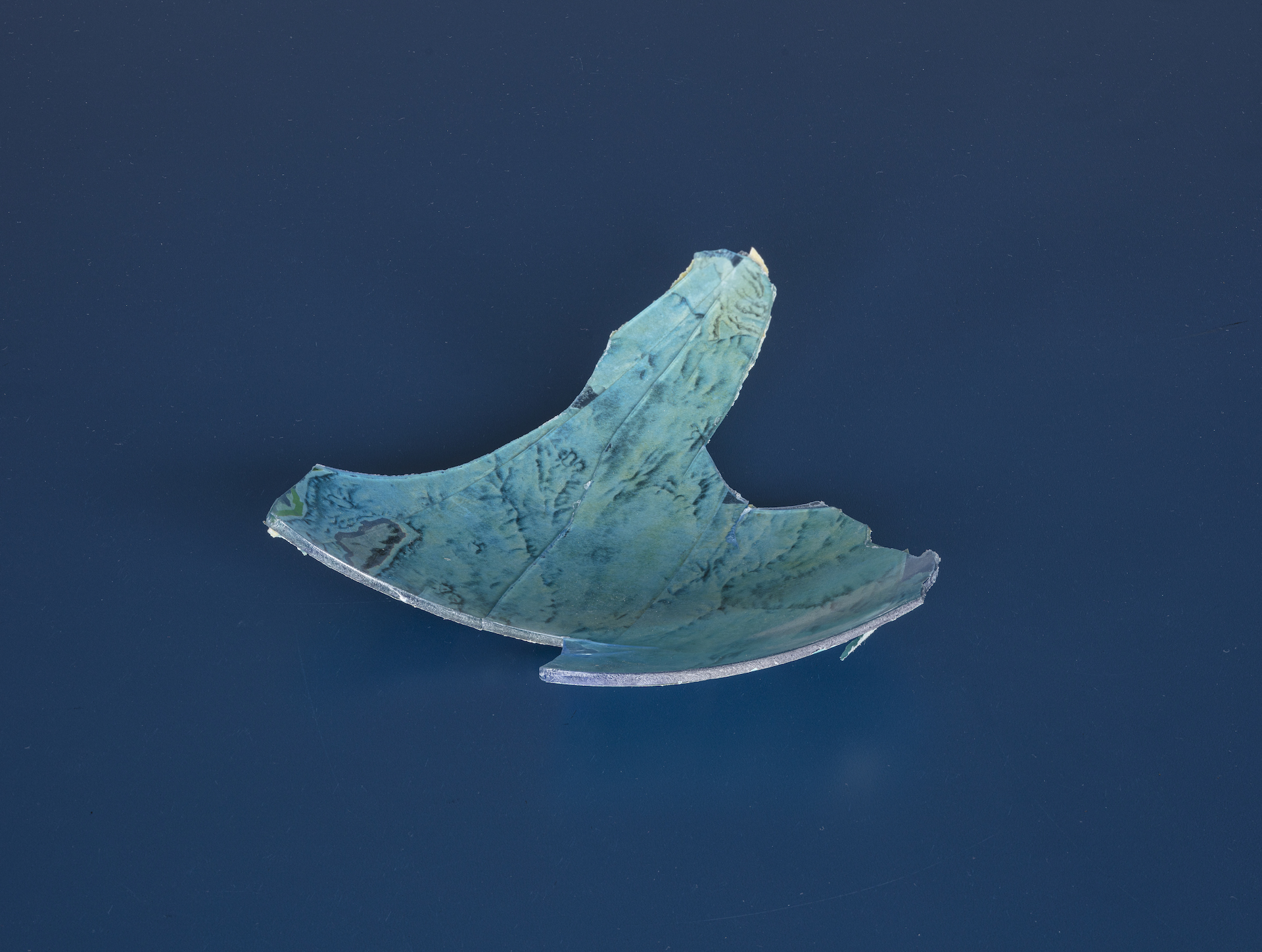 A Kasssen, Ocean underneath. Photo credit: A Kassen. 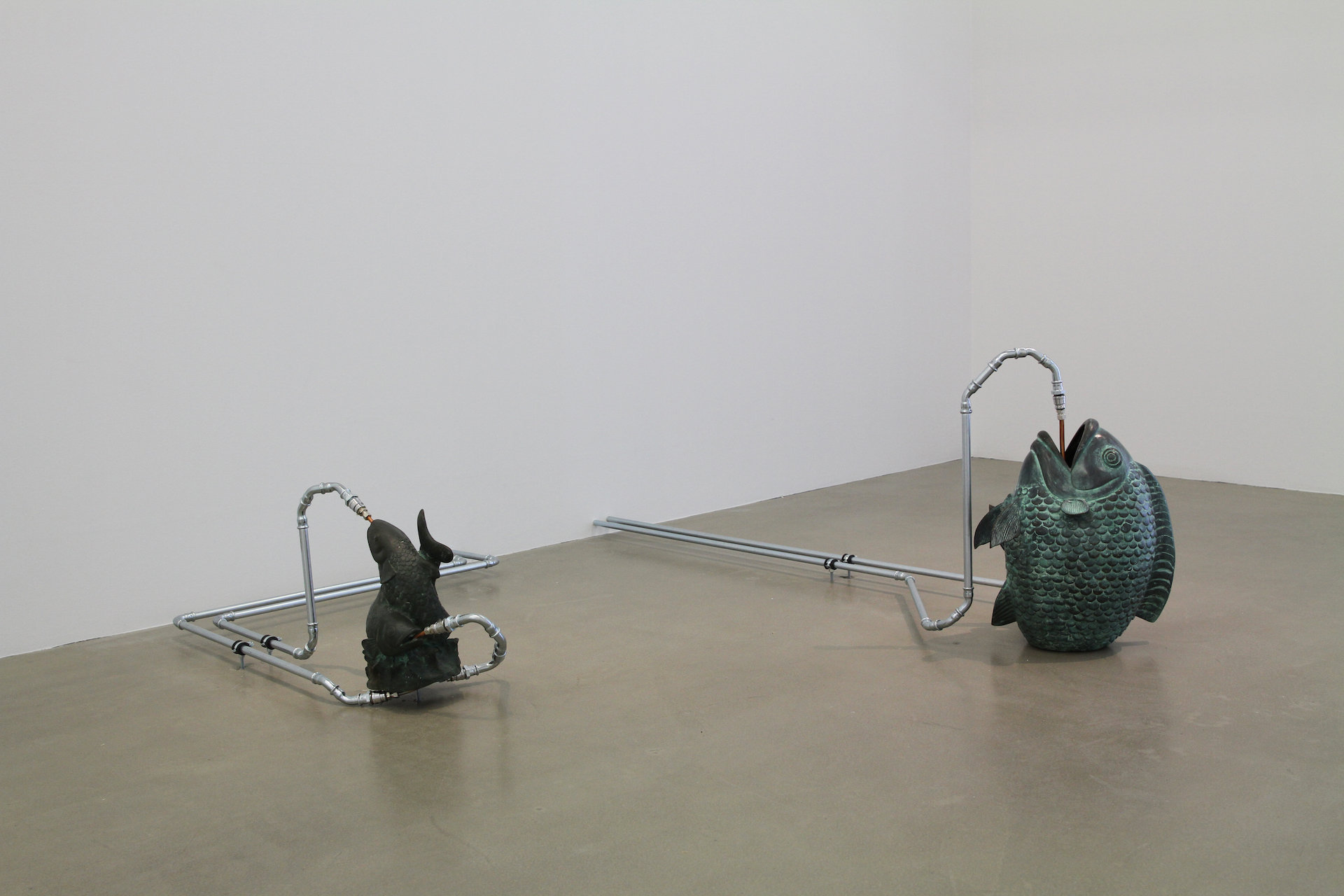 In the last room we encounter the work Geothermal heating / fountain statue, bronze statues of fishes are placed in the room, crossed by extension pipes which connect them to the heating system of the building. Hot water runs into the pipes, which go through the wall, enter the fish statues bronze mouths, exit from the bottom of the sculptures, and back through the wall to reconnect with the heater system in the adjacent room. This work seems to reverse the meaning of fountain, if these statues were fountains we would see water sprinkling out of their open mouths, while in the piece the water gets into the statues, contained into the pipes. The water is more of a metaphysical concept in the system of the work, since we can’t see it but just imagining it running into the tubes.

In the Icelandic long and cold winter, the heater system is to the building, and the people working there, as the circulatory system is to the human body. The hot water is life-blood of the building, and by attaching the work to the heater system this piece places itself at the very core of the former fish factory, reminding us of the importance of the building. Art is here connected to the physical space, the whole show seems to drive out attention on the physicality of the building, operating on it, creating new connections and making us aware of the space and its specificities.